Dressed to the nines, with blue eye rings, dapper suits, and fancy trailing ribbons, the adult male of this species is a showstopper 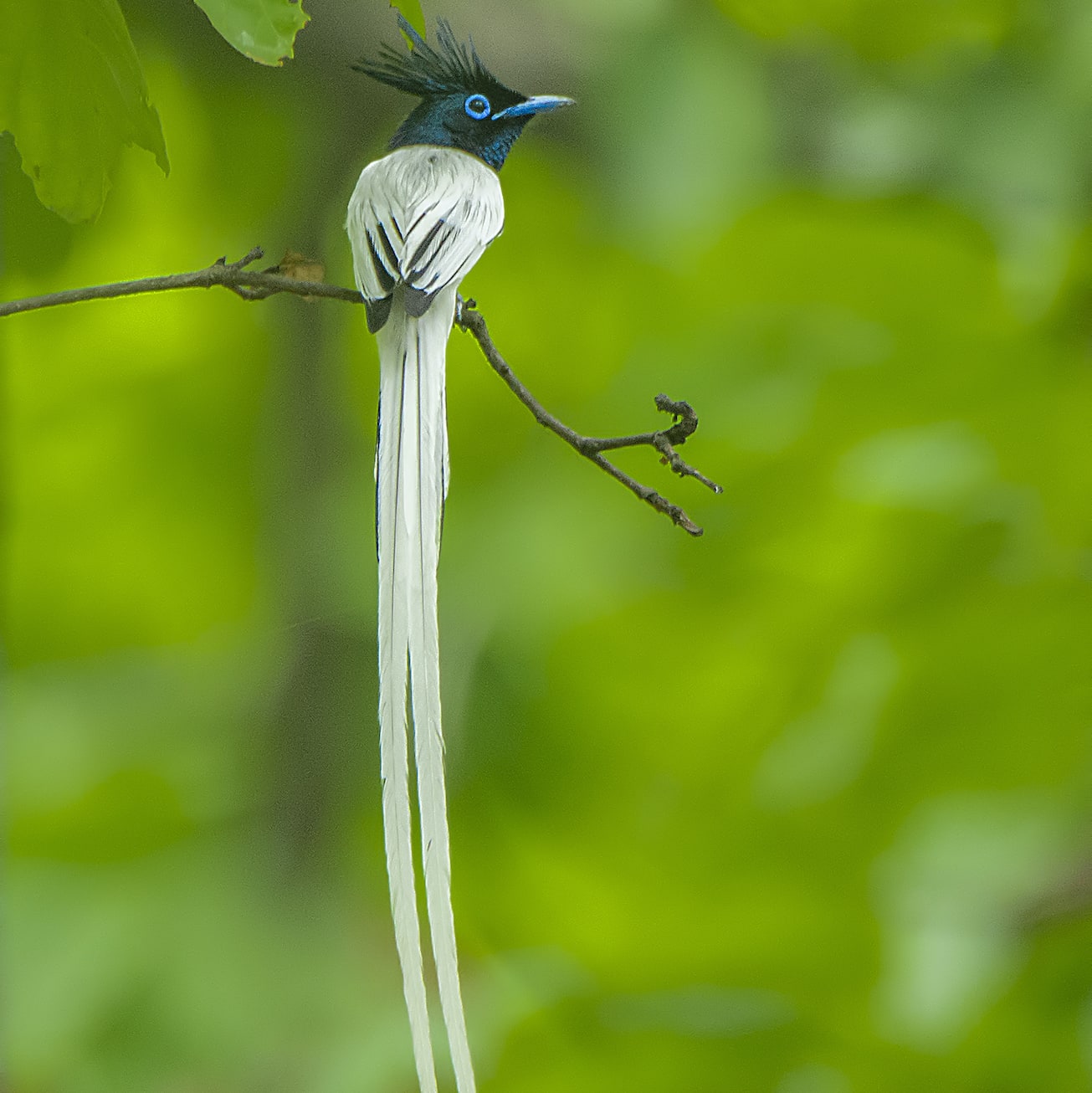 The first time you see this mature gentleman in full regalia, you will be gobsmacked. Perched upright at the edge of a branch, often near water, this silvery-white bird, which looks like a bulbul with the mother of all makeovers, sports a raffish inky blue-black crest and head, black eyes ringed with neon, a spiky black moustache, and two 45-50 cm long white streamers in its tail. Overall, it is silky white, with snazzy black shafts where the wings fold into the body. It flies with all the grace and élan of an Olympic rhythmic gymnast, the long tail trailing loops and scoops and figures of eight as the bird darts after insects.

All paradise flycatchers (Terpsiphone paradisi) are not so glamorous. Males below the age of four are usually rufous, not white, many, alas, remain so all their lives — but they do have long streaming tails. The girls are rufous with greyish underparts and black heads and don’t have the tail streamers.

We’re lucky that this bird is found all over India (as well as Central Asia and Myanmar) generally in forests and well-wooded areas, but also in large parks in big cities like Delhi, usually near water. It is migratory and subject to local movements; birds in the north go south during winter and those living in the Himalayas, come down to the northern plains. 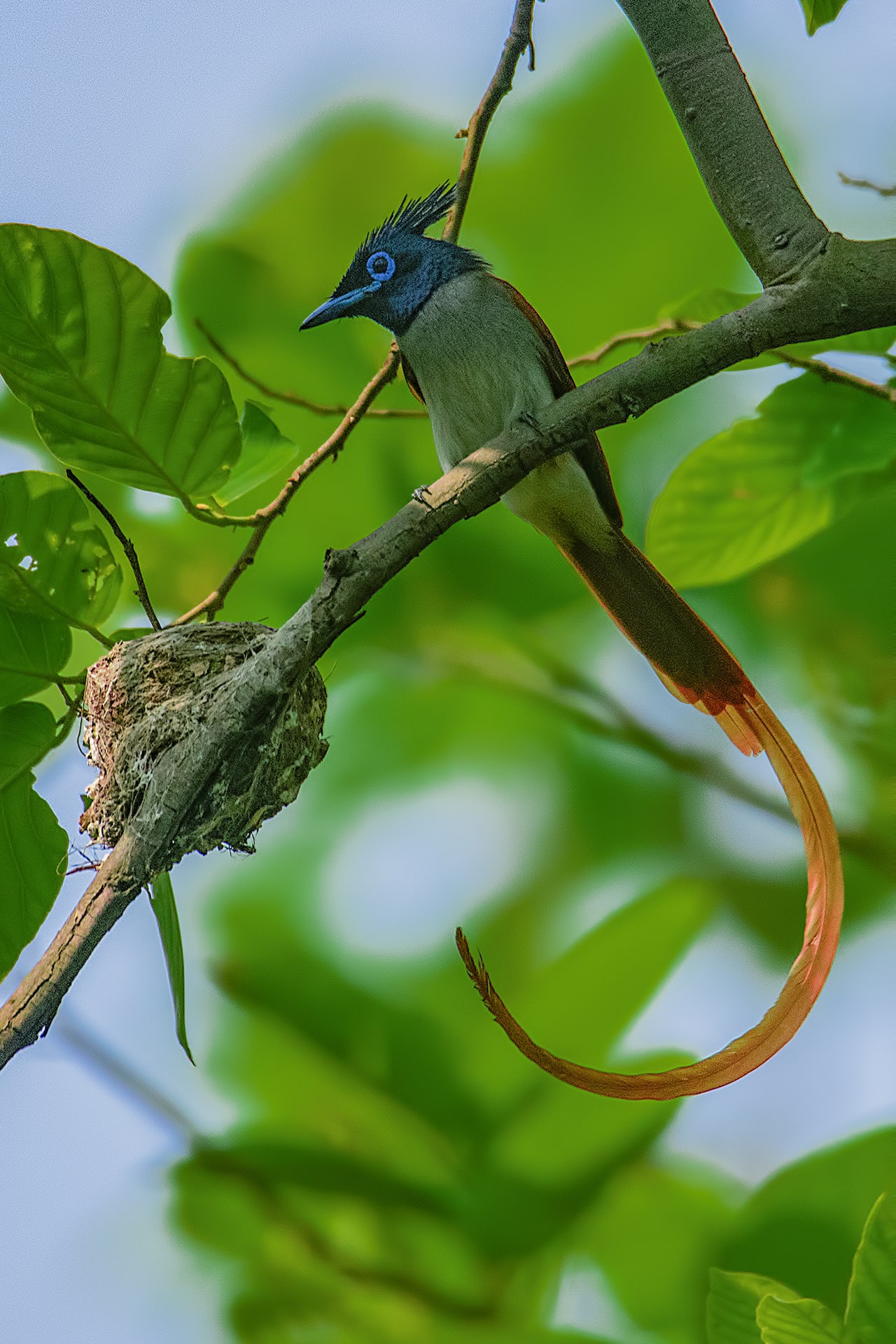 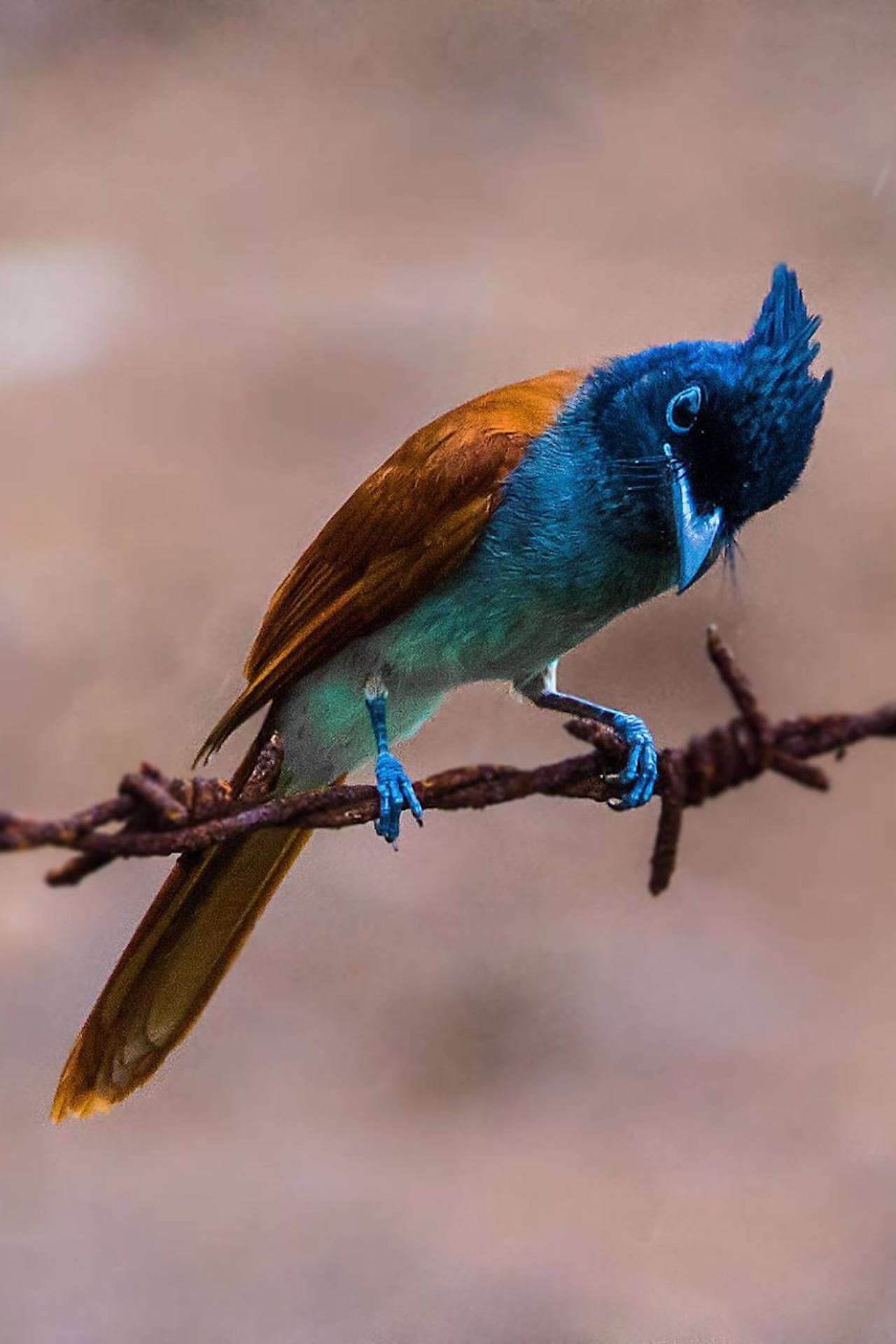 (Left) Rufous morphs of the male Indian paradise flycatcher, with white underparts, are more common than the white-tailed dazzlers. (Right) Females do not possess the long, bewitching tail of the males. They also lack the blue ring around the eyes.
Cover photo: The male Indian paradise flycatcher is a sight to behold with its long, ribbonlike tail, glossy black head, and blue rings around its eyes.

I’ve been lucky to encounter this glam king (known as doodhraj, or shah bulbul in Hindi) on several occasions — the experiences have ranged from enthralling to exasperating. One of the first occasions was on Delhi’s Northern Ridge, not 3 km from home, where I walked regularly. One evening in March, a sharp, irritable, “chechwe” sound put me on alert and when I made my way to the edge of a scummy pond I was skirting, I saw it: a silver-white male darting amongst the bamboo pennants, snapping up insects. I hoped that he — and his partner — would be raising a family there. But mysteriously, the bird disappeared as the summer heated up, and reappeared around July, after the breeding season was over, minus its ribbons. For a few more years I saw them again — but more often only the female — and now they seem to have vanished forever probably because of the general disturbance and gangs of hoodlum macaques that infest the area.

It was in Palampur, Himachal Pradesh, where I got better acquainted with them, at the small tea estate where we were staying. Our hostess casually mentioned that there were these “white birds with long tails” that kept flying to and fro, which alerted me. And sure enough, I soon caught a glimpse of them whizzing from one end of the estate to the other, looking like they were floating, with ribbons streaming behind. I soon discovered that there were probably at least two, if not more, families in the vicinity, and not all the males were all white. Eager to photograph them, I stalked them in the garden, ploughing through knee-deep wet grass (it was the monsoon), and boy, did they give me the run-around. They’d whistle me up from inside the house — in addition to that acerbic sounding “chechwe”, they have a pleasant fluting whistle and song — and made me trudge up and down the garden slope, never pausing long enough for a decent picture. If they did, they would do so when a huge dark thundercloud had settled on the shoulder of the hillside, blotting out the light. The birds were obviously nesting and guarding their privacy like the British Royal family does from paparazzi. 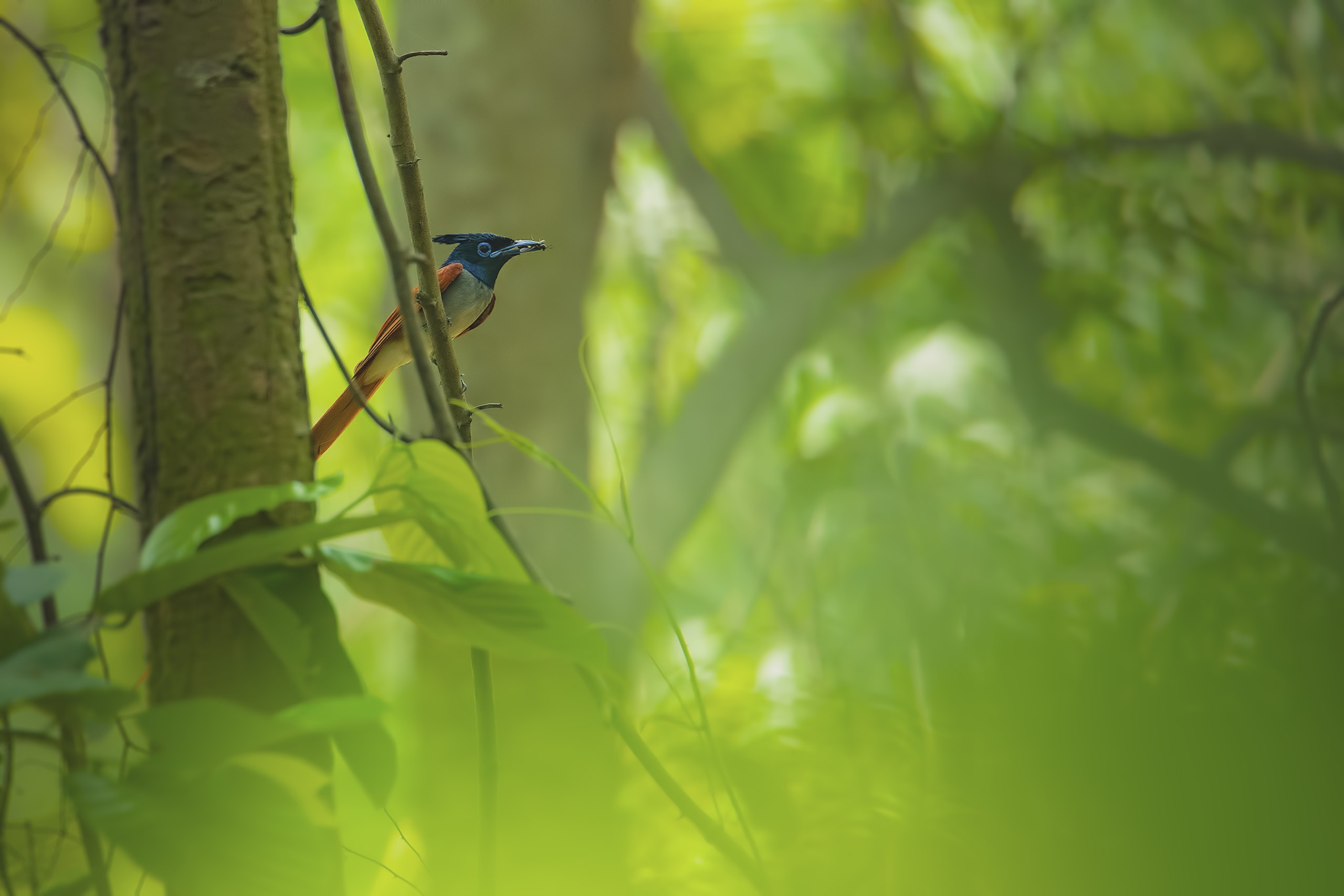 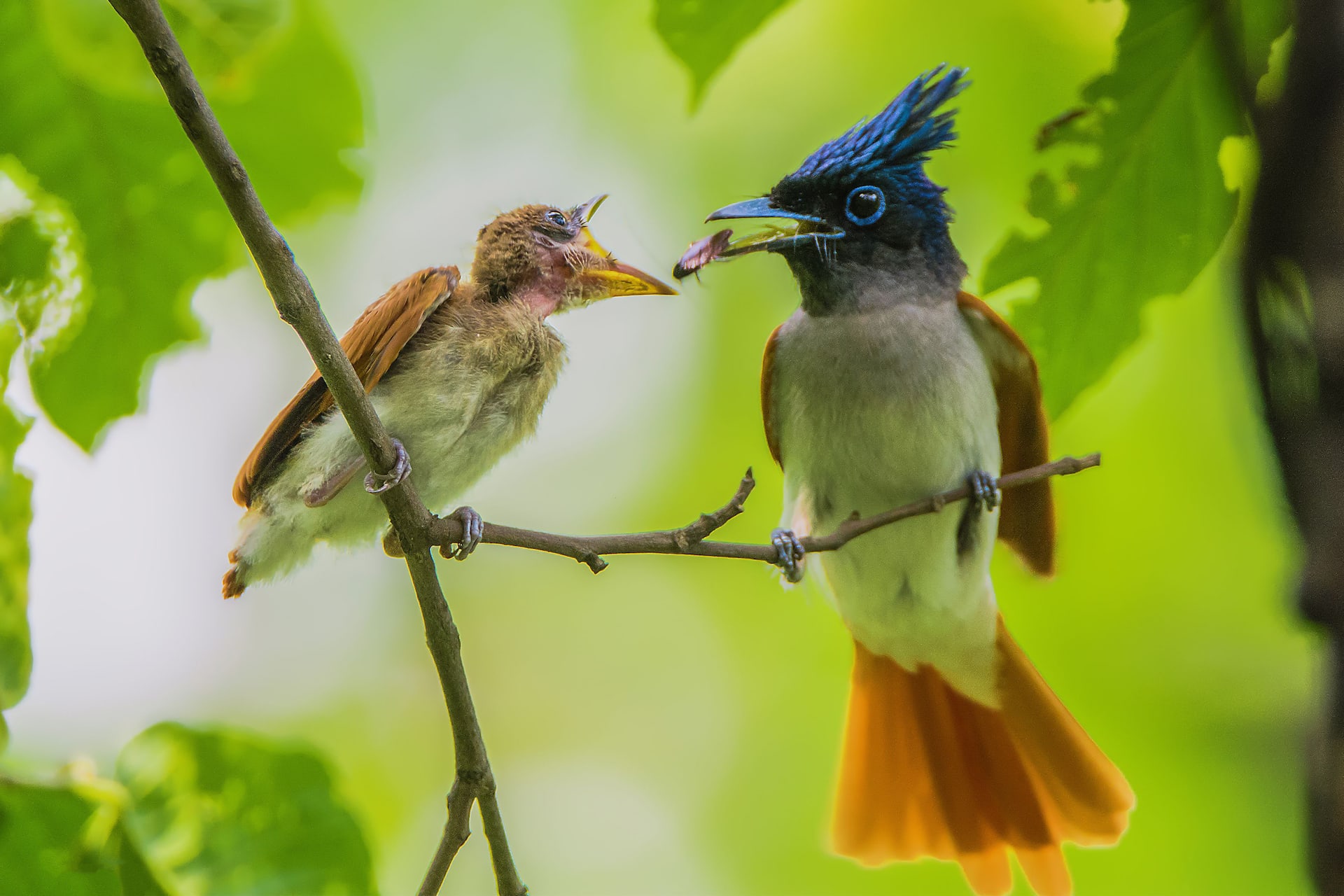 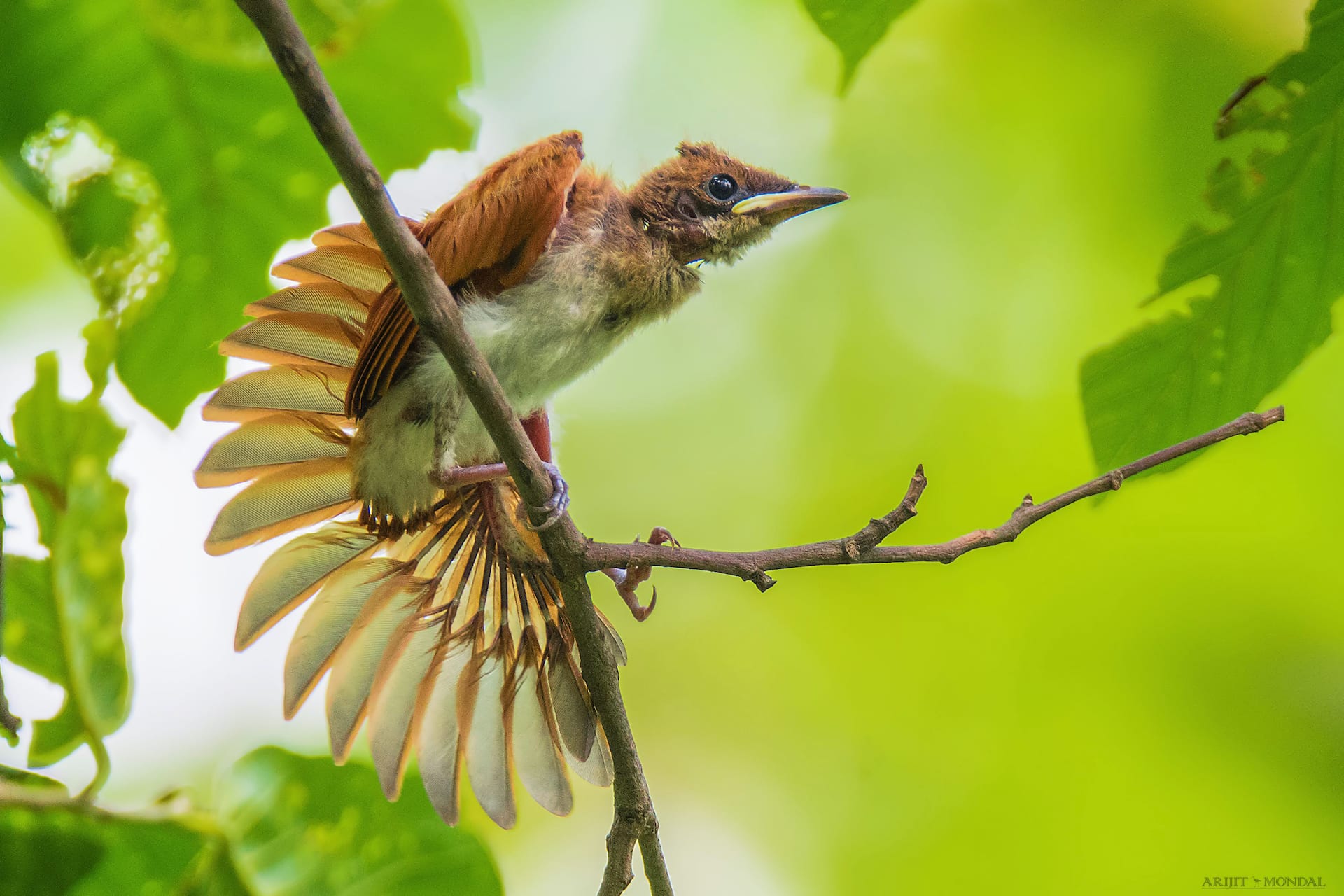 (Top) The flycatcher will often return to its favourite perch after catching an insect mid-air. (Above left) Both the male and the female bird (seen here) are known to take care of their young. (Above right) Chicks are ready to leave the security of parental care when they are around a month old.

On another holiday, this time in Naukuchiatal, the resort we stayed at would simply dump its garbage down the mountainside at the back of the compound. And here, to my delight, I spotted two families of paradise flycatchers — both patriarchs in silver-white with their wives, hunting happily but ensuring they kept their distance from the other pair. I spent that holiday knee-deep in garbage, watching and trying to photograph them sally as they darted down (one almost touched my feet) to snap up the flies buzzing around this garbage paradise. (But really, who would think there were flies in paradise in the first place?) They too were nesting — in a thicket down a gully near a stream, some distance away. By the end of my holiday, I was properly blasé about them and began ignoring them.

While courting, a gentleman paradise flycatcher will fly up and down steeply, fluttering his wings rapidly, his tail undulating behind him. Pairs remain faithful to each other and the female lays three to four eggs in a tidy little nest, usually located near that of a drongo (called kotwal) for the protection it provides. Both parents take care of incubation and bringing up the fledglings. Incubation lasts a fortnight, and the fledglings are ready to leave home in about a month.

It’s believed that the girls prefer the dudes with the fancy ribbons and silver-white suits, but apparently, the more ordinary rufous version (or morph) is more common, indicating it may have better breeding success. This could be because the glamour-kings probably attract predators more easily than their rufous brothers.

One is most likely to spot this enchanting bird, that seems to have stepped right out of a fairy tale, in wooded areas.

Happily, these birds are doing well and have been ranked “Least Concern” on the IUCN Red List. But according to a fable, they could have done better. Long ago, the flycatcher was a plain brown bird that caught flies. He saw these beautiful silver-white birds with long tails behind the gates of Eden and asked the guardian angel if he could be like them. He was told he could if he went back to Earth and did good deeds, so he became pure inside and out. This, the little bird did, and he too turned silver-white. He went back to Eden and the guardian angel was duly impressed let him enter. But now the bird turned around and scoffed at all the other plain brown birds he’d left behind. God was annoyed and turned the bird’s head black (not a politically correct thing to do, but you tell Him!), left just two streamers in his tail, and deemed he would have to spend his time on Earth. For most of us, that’s good enough!