The brilliantly-coloured Indian pitta is an eyecatcher — it has adorned magazine and book covers, and inspired local names and tales wherever it has travelled 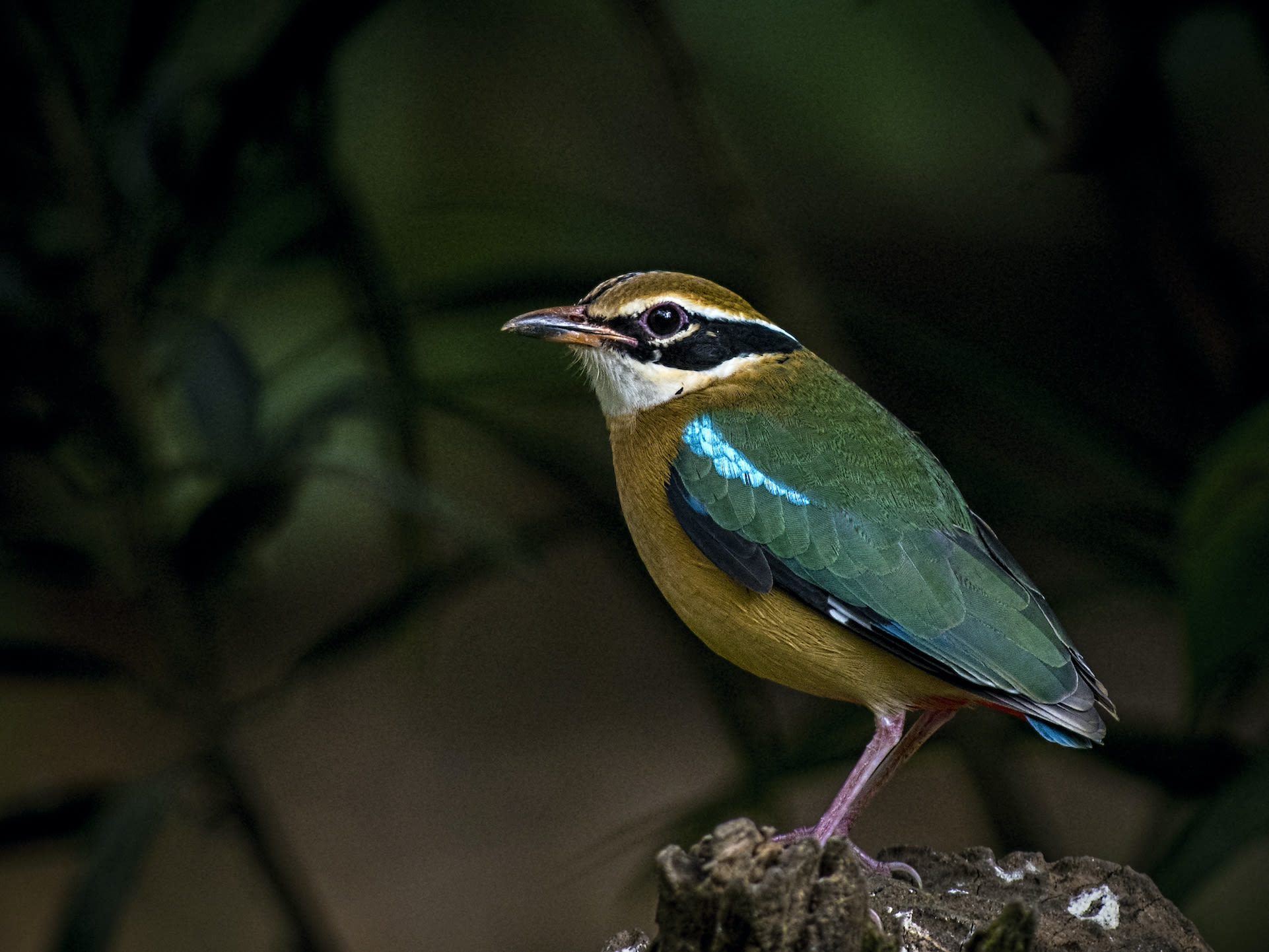 A big haystack in front of me, and a roofed cottage close by. It is 7 am, and along with my friend, Neeraj, I have just reached the locality of Padle Gaon. This idyllic rural setting doesn’t really make me feel like I am still in the metropolis of Thane, having just driven 40 odd kms from my home in the suburbs of Mumbai. It’s a Sunday, and rather than get some peaceful shut-eye, we are afflicted with the itch most birders in the city currently have. We are on a mission to see one of the most colourful avian inhabitants of our country, which arrives every summer for a couple of months to Mumbai.

As we step out of the car full of hope, suddenly, we are attacked! Fortunately, I had been warned of this attack. Vicious as this swarm of mosquitoes was, the copiously applied repellant to our skin keep the worst of the bites at bay. Anxious not to stay out very long, we take quick strides onto the dirt track leading into a small woodland area, where some of my friends had seen this avian visitor previously. I am hoping the bird keeps its habit of letting us know where it is. It is a vocal species with an unmistakeable call and it is the beginning of their breeding season. And just a few minutes in, I hear it, “wheet-teuu”. Score! We follow the source of that distinct two-note whistle. As we get close, we spy movement on a leafy peepal tree. We strain to check for what it is through our binoculars. Yep, clearly a bird, the right size too. Hop, hop, hop and it stops on an open branch! There it is! I breathe a sigh of relief, as my friend, Neeraj sights for the first time ever — the brilliantly shaded Indian pitta or as it is known in Hindi, the navrang!

The shy and secretive Indian pitta’s name is derived from the Telugu word pitta bird, which means a small bird. Photo: Arpan Saha Cover: The Indian pitta is a small, colourful bird measuring around 20 cm. This individual was photographed at the Thattekad Bird Sanctuary in Kerala. Cover photo: Arpan Saha

Even if you may not have seen the Indian pitta in real life, its dazzling appearance adorns book and magazine covers, paintings, lapel pins, earrings, postage stamps and of course more recently, desktop and mobile phone wallpapers. Further evidence of its popularity is the sheer number of languages in which this bird is known — Gujarati (Hariyo), Bengali (Bornali), Malayalam (Kavi) and Punjabi (Nauranga). However, its Tamil name is particularly interesting.  It’s called the ‘aru-mani kuruvi’ in Tamil, which translates to the “6-o-clock bird”. This refers to its curious habit of calling at 6 AM and 6 PM (The bird of course doesn’t always call at that exact time, this is an allusion to its crepuscular behaviour of being active during dawn and dusk).

Another interesting name of the bird comes from Sri Lanka, where it is known as avichchiya and is known to be a harbinger of the new year (the time coincides with the bird’s migration to Sri Lanka). According to local folklore in Sri Lanka, the peacock supposedly got its bright plumage from sticking together feathers of other birds including those of the pitta. The call of the Indian pitta is interpreted as a lament of this crime “Evith giya, evith giya, ayith kiyannam, methe budun buduwana vita ayith kiyannam” translated as “Came and went! Came and went! I’ll still be complaining when the next Buddha comes! I’ll still be complaining!”

Over and above these names, the very word, “pitta” comes from Telugu, meaning “small bird”. That may lead you to wonder why the word “pitta” originated in India, if there are over 40 species of pittas today worldwide. It is because the very first pitta to be scientifically described was in fact, the Indian pitta, first published in scientific literature as early as 1713 and later formally described by French zoologist Mathurin Jacques Brisson in 1760. Gradually, the Indian pitta was placed under the genus, “Pitta” by Louis Vieillot in 1816. Its present-day scientific name is Pitta brachyura, the Latin species name brachyura, referring to its short tail.

Endowed with long legs, a stubby tail and a stout beak, the bird is usually seen foraging for insects and worms in the undergrowth. Photo: Mukund Kumar/Shutterstock

This short tail, stout body and comparatively strong legs give us an idea about where an Indian pitta is usually found. This is not a species known for quick, aerodynamic manouevres sallying for insects, but is in fact at home on the forest floor, hopping about in the undergrowth, combing leaf litter, for the small critters that make up for its diet. Interestingly, these birds have also been found to have a keen sense of smell, undoubtedly useful in locating hidden, subterranean prey such as earthworms which they dig out with their strong bills.

The Indian pitta shows local migration. From October to March, these birds largely keep to the broad-leaved deciduous or semi-deciduous forested tracts of southern India and Sri Lanka. Usually around mid-April, they begin their voyage north. At this time, they often turn up in curious places. Besides gardens and groves, young birds may accidentally bang against windowpanes or be found exhausted in housing societies. Presumably this happens due to confusion from artificial illumination as they have been known to migrate through the night.

This is also the commencement of the breeding season and the birds become increasingly vocal right up till the end of June. At this point, some of the birds continue their northward journey, making their way up to Uttarakhand, Himachal Pradesh and Nepal. Others move east towards West Bengal and Bangladesh and still others, begin nesting activities in central India itself in the states of Maharashtra and Madhya Pradesh. The nest itself is in the shape of a globe, matted together consisting of twigs, dry grass and leaves, with a small hole located on the side for an entrance. The nest may either be found on the ground or on a tree. They usually lay between 4-6 eggs, and the average incubation period is just under a month. It is an arduous period for the parents once the chicks hatch, as for the next few weeks, both the parents are engaged bringing food for the newborns until they are old enough to venture out and hunt on their own.

Dawn and dusk is when the Indian pitta is most active, throwing its head back and pointing its bill upwards, to emit a distinct, loud two-note whistle. Photo: Aditya Singh/Shutterstock

If you are keen to sight an Indian pitta, there are a couple of things to note about its behaviour. As is usual with birding, you must head out early in the morning, especially with this species. It prefers shaded, covered areas, and even with those bright shades, it can be remarkably inconspicuous if it wants to be. Its distinct call can be the best way to trace its location, and close to breeding season, seeing the bird can be somewhat easier as it is vocal throughout the day. However, this is an energy-intensive activity for the bird, so take care to watch it respectfully from a distance through binoculars. Bird photographers need to be even more careful especially when the bird is nesting. Parents can temporarily abandon a nest if disturbed and this leaves it open to predation from a variety of birds and mammals.

I believe the Indian pitta to be a particularly important symbol for conservation. It draws people into the rewarding hobby of birdwatching, which is often the reason we have been able to identify vulnerable species and the threats that face them. The pitta’s breeding and wintering range lie in the forests of India and its neighbouring countries. The survival of this species is inextricably linked to the conservation of these forests. With the symbolism, awe and wonder it inspires, the Indian pitta is unquestionably a superstar of the avian world, and I hope it always remains so.