An active, adaptable predator that keeps a check on many of the pests that thrive around us, this common snake also becomes prey for cobras, mongooses and raptors 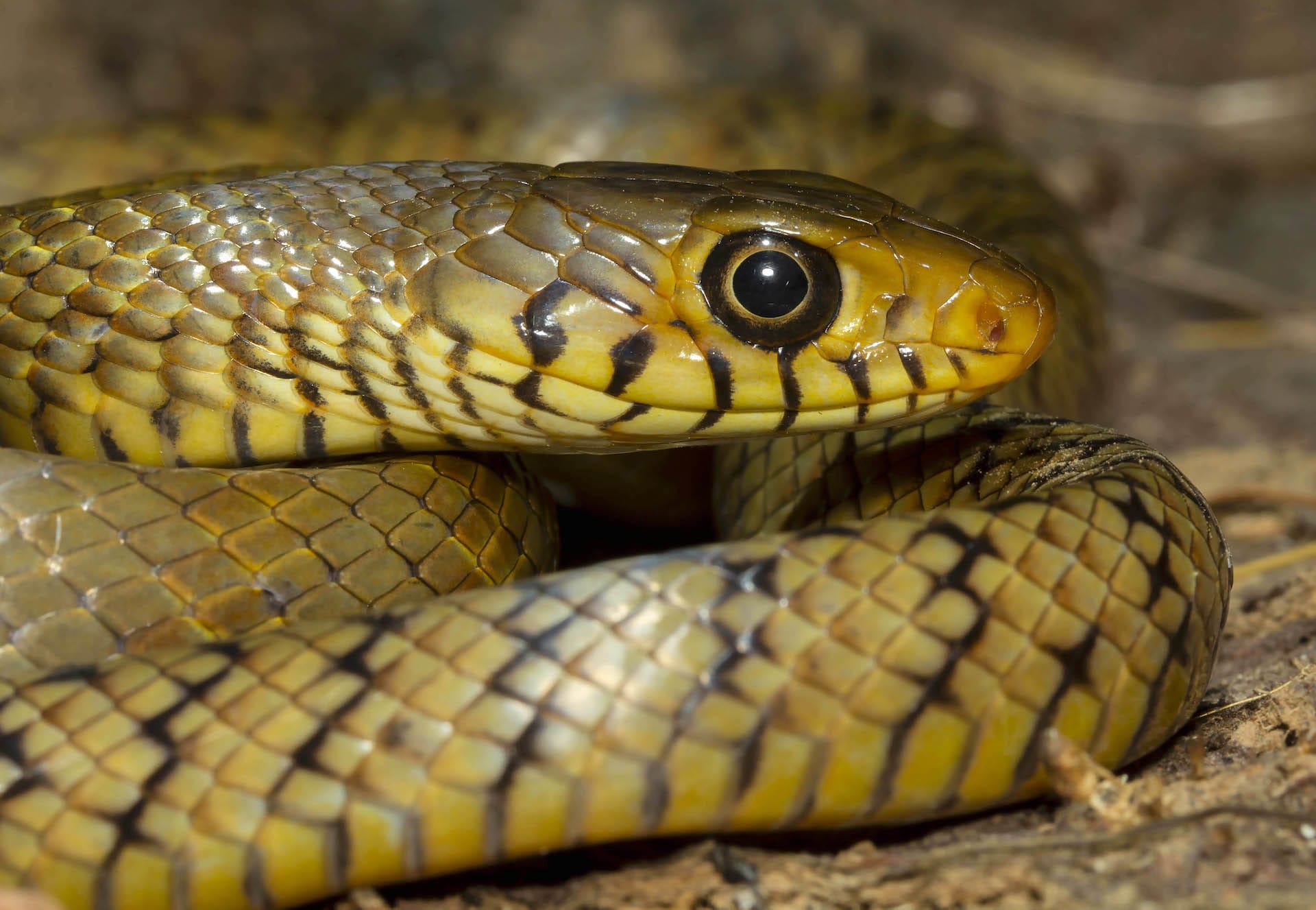 “Please catch it! It will destroy my field with its tail”, said the owner of the field in question as we watched a beautiful seven-foot rat snake disappear into the paddy. The Indian or oriental rat snake (Ptyas mucosa) is arguably the second longest colubrid snake (snakes without any vestigial limbs or enlarged teeth on the pre-maxillary bone) in the world. The longest recorded rat snake is 3.7 m, which is a little over 12 feet! However, it is rare to see an individual over 2.5 metres. Its size, speed, and lack of stealth have made it one of the most frequently seen snakes around human habitation.

Sadly, instead of this frequency of interaction leading to a level of comfort with the species, it has generated myths, misbeliefs, and unwarranted fear. These range from the sublime to the ridiculous. On the sublime end of the spectrum is the belief that rat snakes can whip and envenom victims with their tails; a belief that was possibly born from the fact that rat snakes have very long tapering tails that they often wrap around things to give them purchase. In fact, the bite of the Indian rat snake is harmless to humans. On the other end of this colourful spectrum is the belief that rat snakes are cobras’ spouses. I’ve heard both versions; of rat snakes being the husbands and the wives.

Rat snakes will puff their throats up in response to an attacker, to look larger, while “growling” as a warning.
Photo: Saunak Pal
Cover photo: The rat snake is often mistaken for a cobra, but the black lines between the scales on its lip are a sure-fire way of distinguishing it from its venomous cousin. Cover photo: Rajesh Sanap

The truth about these snakes is far less dramatic but should be far more meaningful to us. Rat snakes are an intrinsic part of almost all landscapes in India. They are found in a wide range of habitats from arid regions to rainforests, and rural landscapes to the heart of high-rise dominated landscapes of cosmopolitan cities. In fact, they’re found exceedingly frequently in cities.

The Indian rat snake is an active predator and will eat almost anything including other snakes. Other animals on the menu include birds, eggs, amphibians, rodents, insects, and lizards. Not only does the rat snake have a wide range in its diet, but, also it eats a lot! This makes it an incredibly useful animal to have around. Without rat snakes, we would have a very hard time keeping a check on rodent populations. The snake’s hatchlings and young also feed on insects. Hence, the species does a lot in the way of controlling all kinds of pests. A service we should be grateful for.

Setting aside all that the Indian rat snake inadvertently does for us, there’s still a lot to admire and wonder about it. For instance, when threatened, the rat snake will raise its forebody a little off the ground, expand its neck downward and growl. Yes, growl! 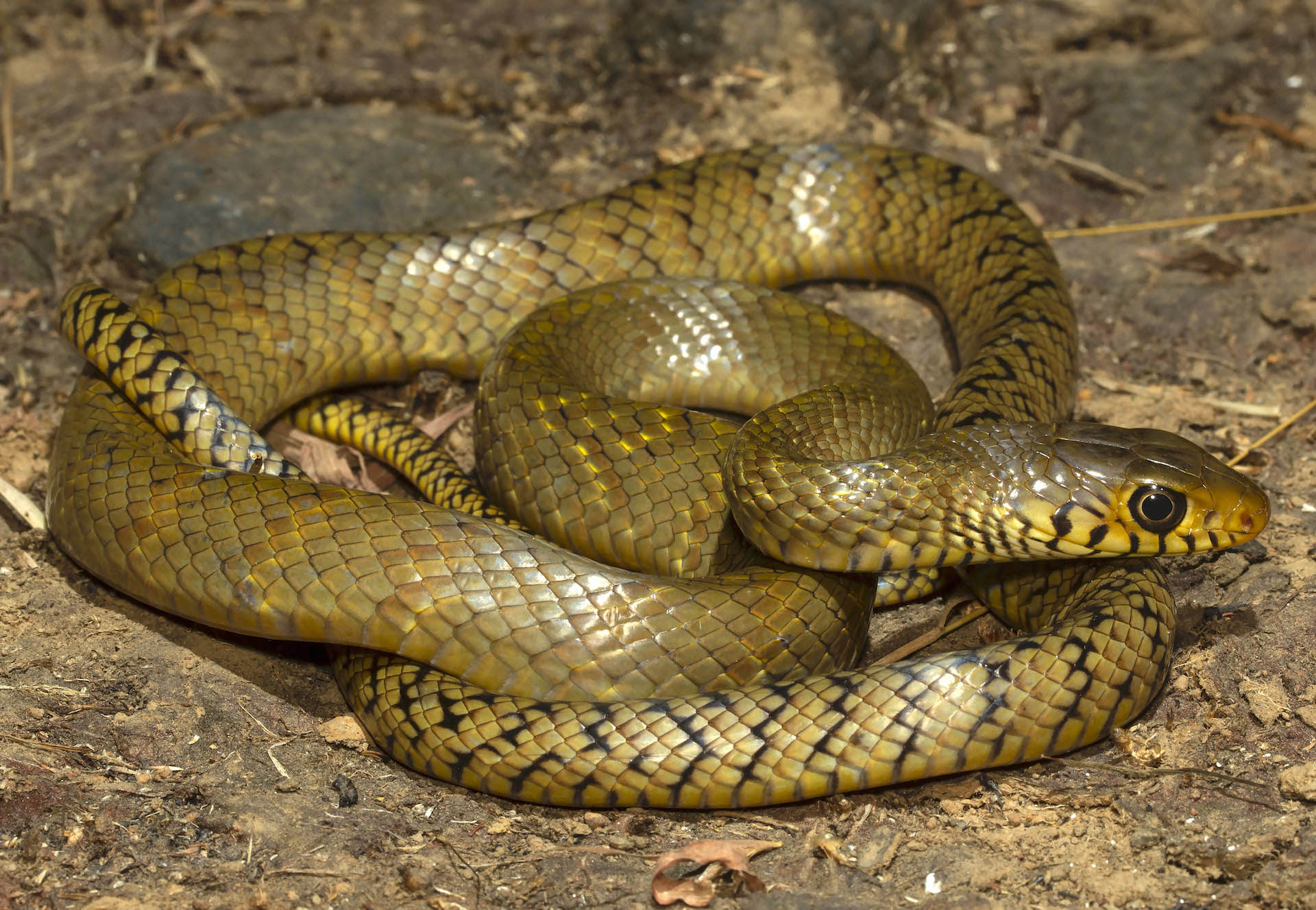 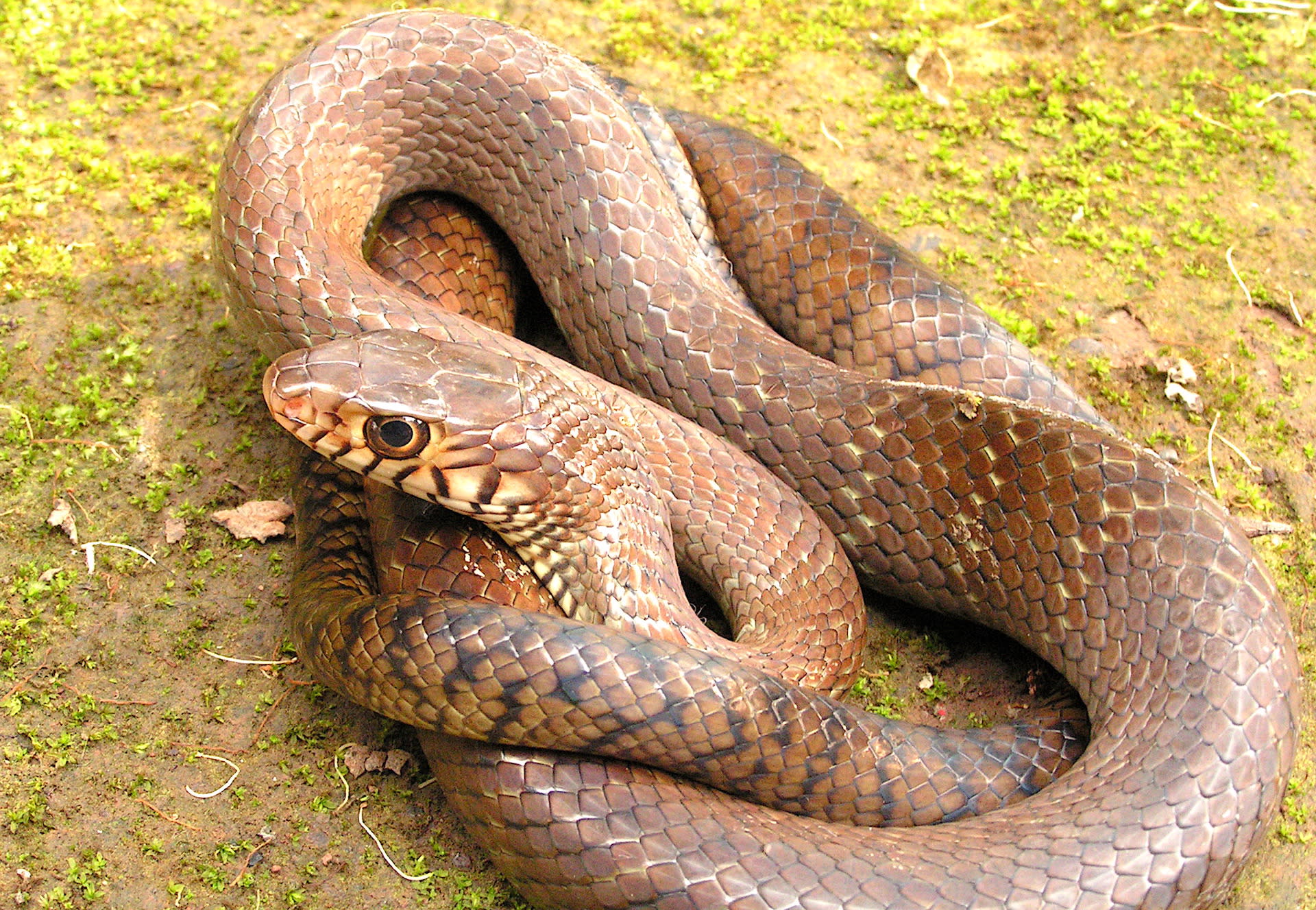 As a child, I remember reading about Rom Whitaker looking for king cobras in Silent Valley, Kerala and leaping into the vegetation after a long black snake that he thought was a rat snake. He grabbed it by the tail, only to discover an enormous king cobra, growling back at him. Decades later in Silent Valley, I jumped after a giant black snake that I thought was a king cobra, only to find a massive rat snake growling back at me. The rat snake is the “favourite” (most commonly eaten) food of the king cobra in the forests of South India. But king cobras aren’t the only predators that seem to seek out rat snakes to enjoy a healthy meal. Large raptors like the crested serpent eagle regularly catch rat snakes. Mongooses will make a quick meal of one. Or rather, kill one, and eat till their tiny stomachs are full and leave the rest to be eaten by other animals. I have very often seen rat snake bodies with the head and neck region chewed off and only speculate that these were the workings of small carnivores.

The rat snake has very little in the form of innovative defence. It is a very fast-moving snake and is hard to capture once on the run. Yet most of its predators are able to deal with their speed and capture them. I’ve even seen a great Indian hornbill regurgitate a three-foot rat snake to feed its mate inside their nest. 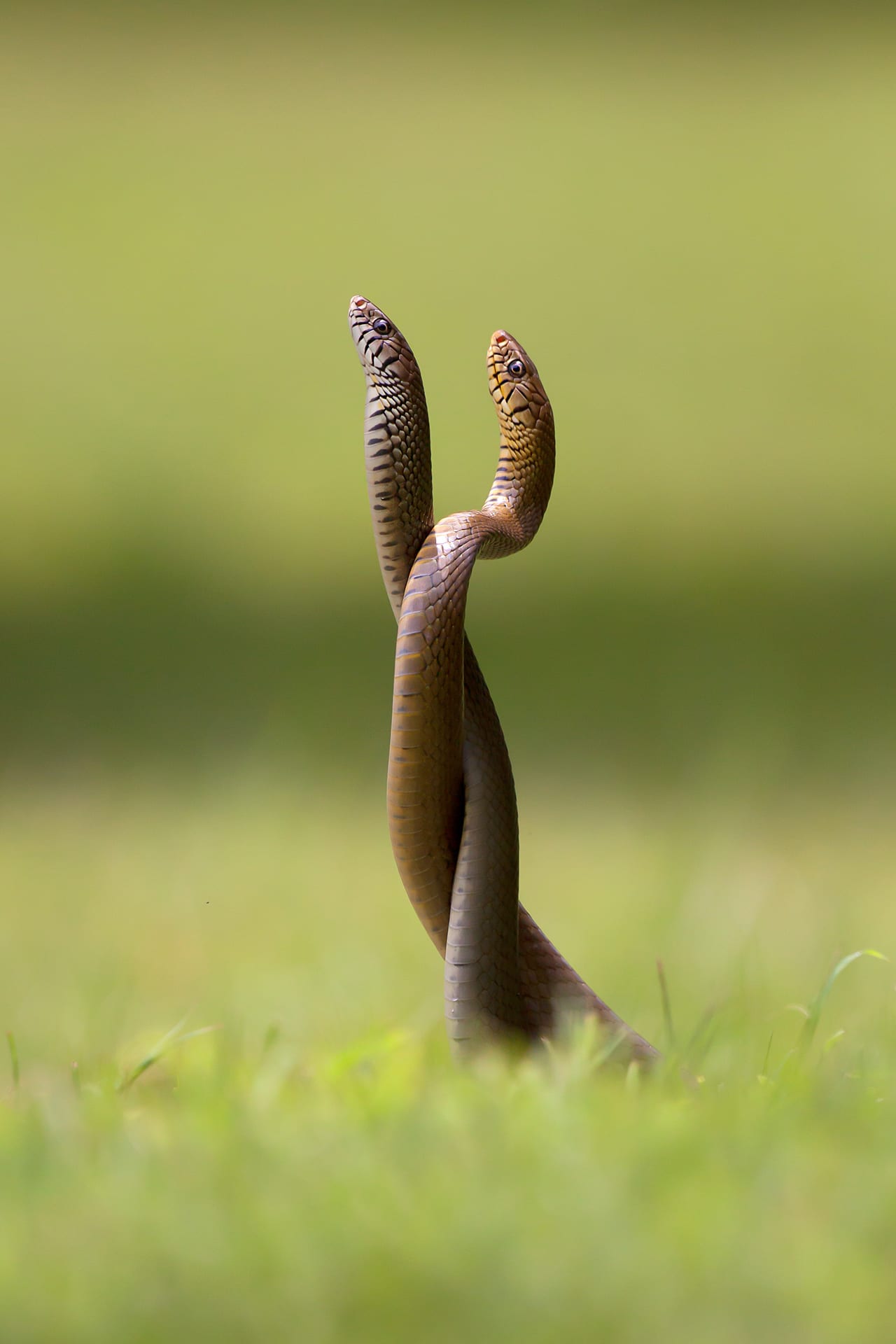 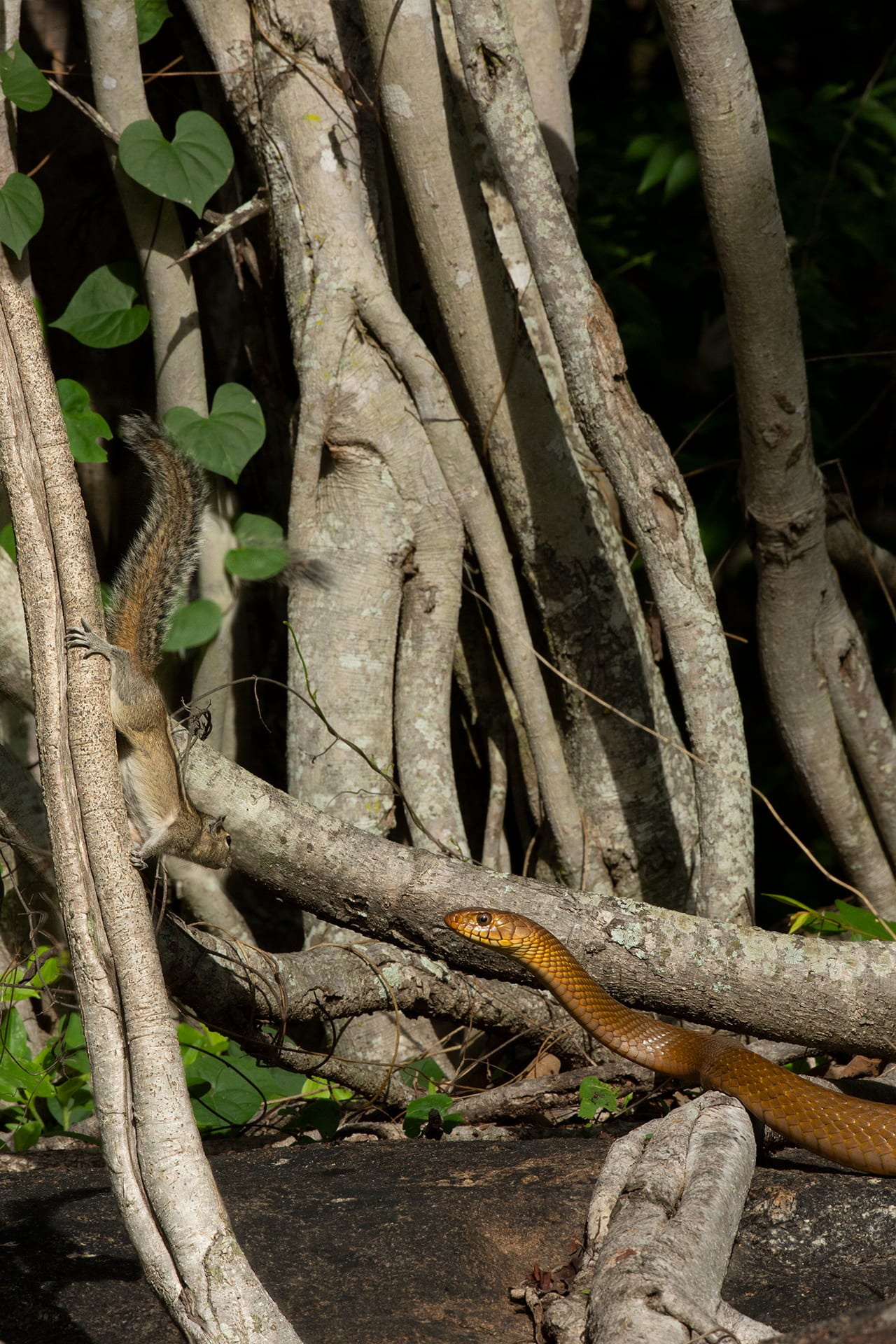 (Left): In March and April, male rat snakes will vie for the right to mate with females. The combat is impressive, with each potentially upward of eight feet male, trying to force his opponent down to the ground. (Right): Palm squirrels are amongst the myriad of animals that could become a meal for a rat snake and other large snakes. Hence, they have a distinct alarm call that they use to warn each other of the presence of serpentine threats. Photos: Phillip Ross

What they lack in physiological adaptations, they make up with spirit. Rat snakes will climb coconut trees at great expense of energy to get to a squirrel’s drey (nest) and devour the young. Or it will dive underwater and stay hidden like a true water snake to escape capture. It will head to the mouth of a cave and get slapped in the face by bats on their evening exodus until it is able to grab one and eat it. But one of the most interesting episodes I’ve seen of a rat snake earning its meal is when I watched one trying to get into the nest of a baya weaver bird. It was hanging off a branch with its crop-destroying tail, while trying to turn upward and aim its head into the long and narrow mouth of the nest. It was successful.

Young rat snakes are little bolts of lightning that spend most of their time grabbing any small animal that moves and almost vacuuming them down. From the time they leave the clutch of two to twenty eggs, these little predators have their work cut out for them. They are the definition of cute, with heads a tad large for their bodies and an inquisitiveness for any possible meal. They grow rapidly and will often double their length in the first month. Their lives will be filled with challenges, hurdles, and perils. But some of them will live to be the familiar serpents that we see around our homes, farms, and fields.

The rat snake may not be many things. But it is adaptable and persistent; both as an individual and a species. It’s time we shed the inane beliefs and unwarranted fears about them and embrace this animal that does so much for us.