Though the law gives it the highest level of protection, stigma and fear continue to threaten the survival of this species 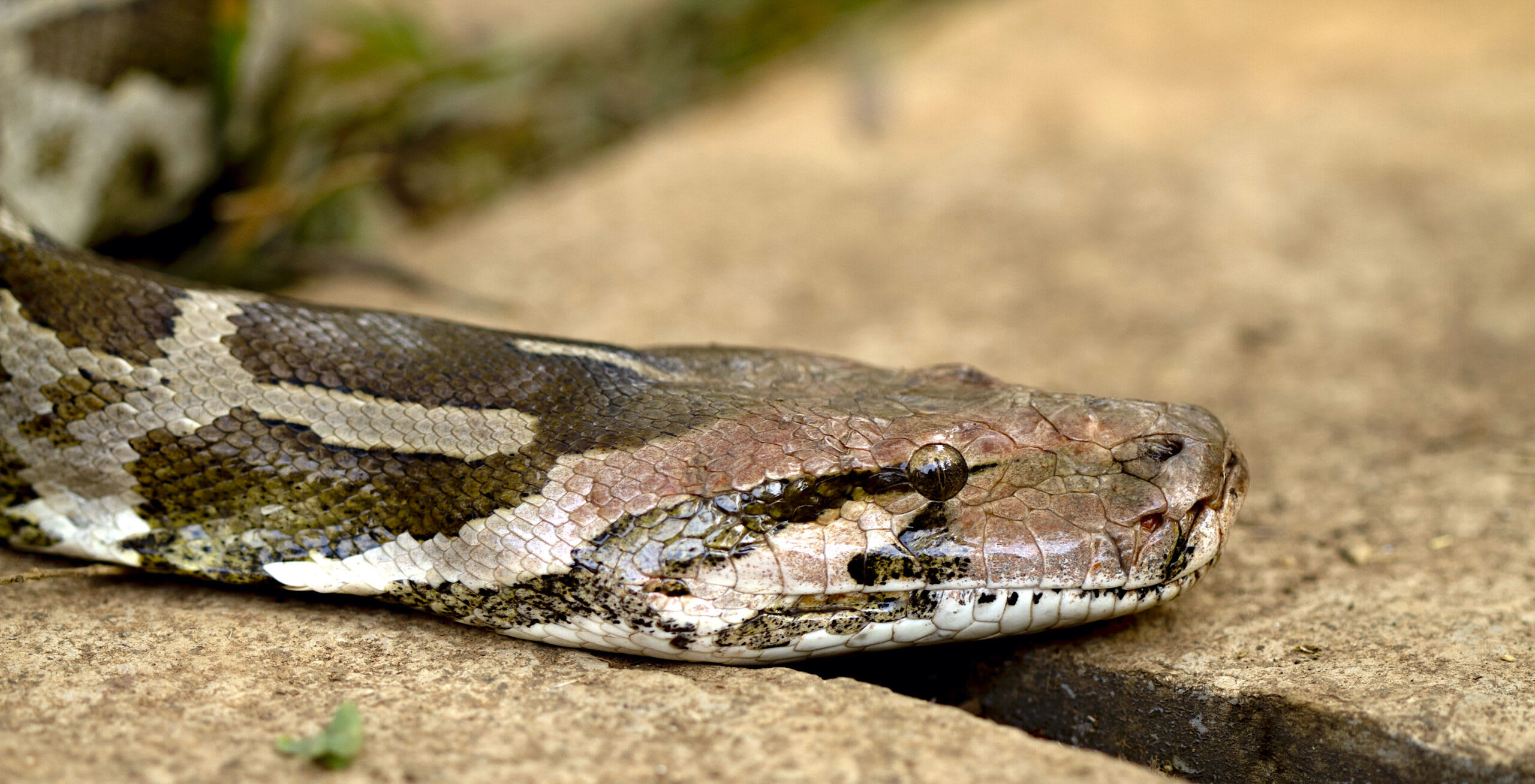 It’s a cold winter’s dawn, and the sun has just begun hitting the reed-covered banks of the Sita Nadi in Karnataka. A coil, about the thickness of a motorbike tyre, pushes through the vegetation, facing the sun. As the sun gets stronger, the snake exposes more of its body to absorb as much heat as it can. It needs this to help digest its meal of a young wild boar that it caught and ate the previous evening.

The Indian rock python (Python molurus), like all other giant snakes, is an ambush hunter. It is one of the three species of pythons found in India, along with the Burmese python (Python bivitatus), and the longest known snake, the reticulated python (Malayopython reticulatus). These snakes wait for prey to come close enough to capture; for them, the bigger the meal, the better.

In order to stay healthy and well-fed, pythons need to be able to take down surprisingly large prey. This allows them to focus less time on hunting and far more time just growing, mating, etc. It also enables them to stay well hidden. As a result, large rock pythons are most often seen in areas with thick vegetation near waterbodies, ranging from small village ponds to massive rivers. The water gives buoyancy to these heavy-bodied reptiles, allowing them to move along easily when they need to hide, escape, or want a better spot to bask or wait in ambush.

Female rock pythons grow significantly larger than males, reaching lengths of almost 5 m, while, males get to a maximum of 3 m. Further, females are bulkier than males, even at the same length. Like many pythons, female Indian rock pythons will find a secure place, often a tree hollow or porcupine burrow, in which they lay their eggs. They are known to stay with the eggs through the entire incubation, and at times, also remain with the young for two to three weeks until they shed their first skins and disperse.

Females wrap themselves around the mound of up to one hundred mango-sized eggs ensuring they are secure. They may twitch their muscles to raise their body temperature when needed. These spasms take up to 20 times more oxygen than non-incubating females do and allow them to generate heat and maintain their clutch of eggs at around 30 degrees C. During this time, they also generate their own heat, unlike during the rest of their lives where they rely entirely on their environment to control their body temperature.

In around two months, young pythons emerge from their leathery eggs and take their first breaths. They will stay there for up to two or three days absorbing the rest of their egg yolks before exiting their eggs completely. They generally stay near the nest until they shed their first skin, usually in a week or so. 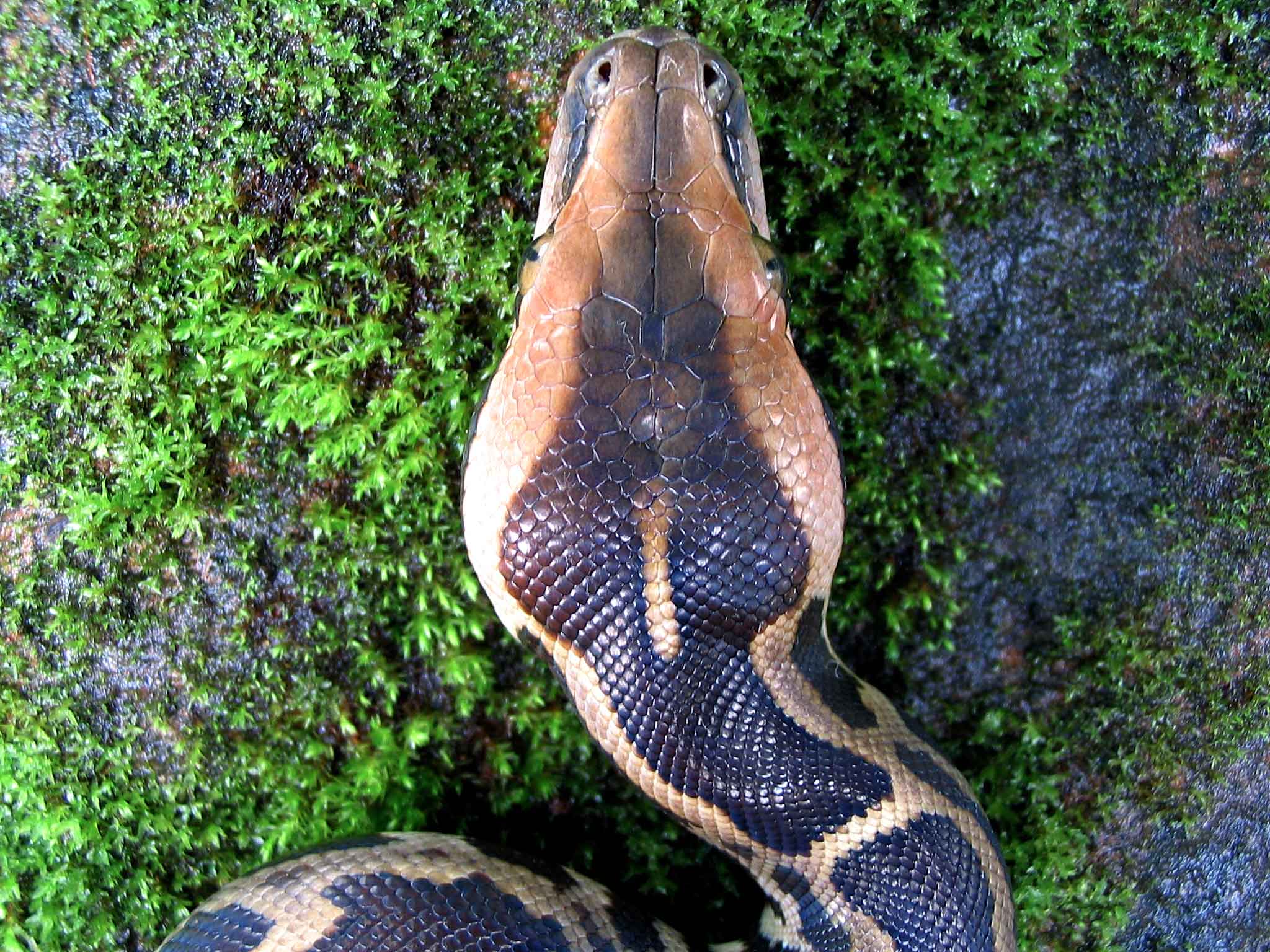 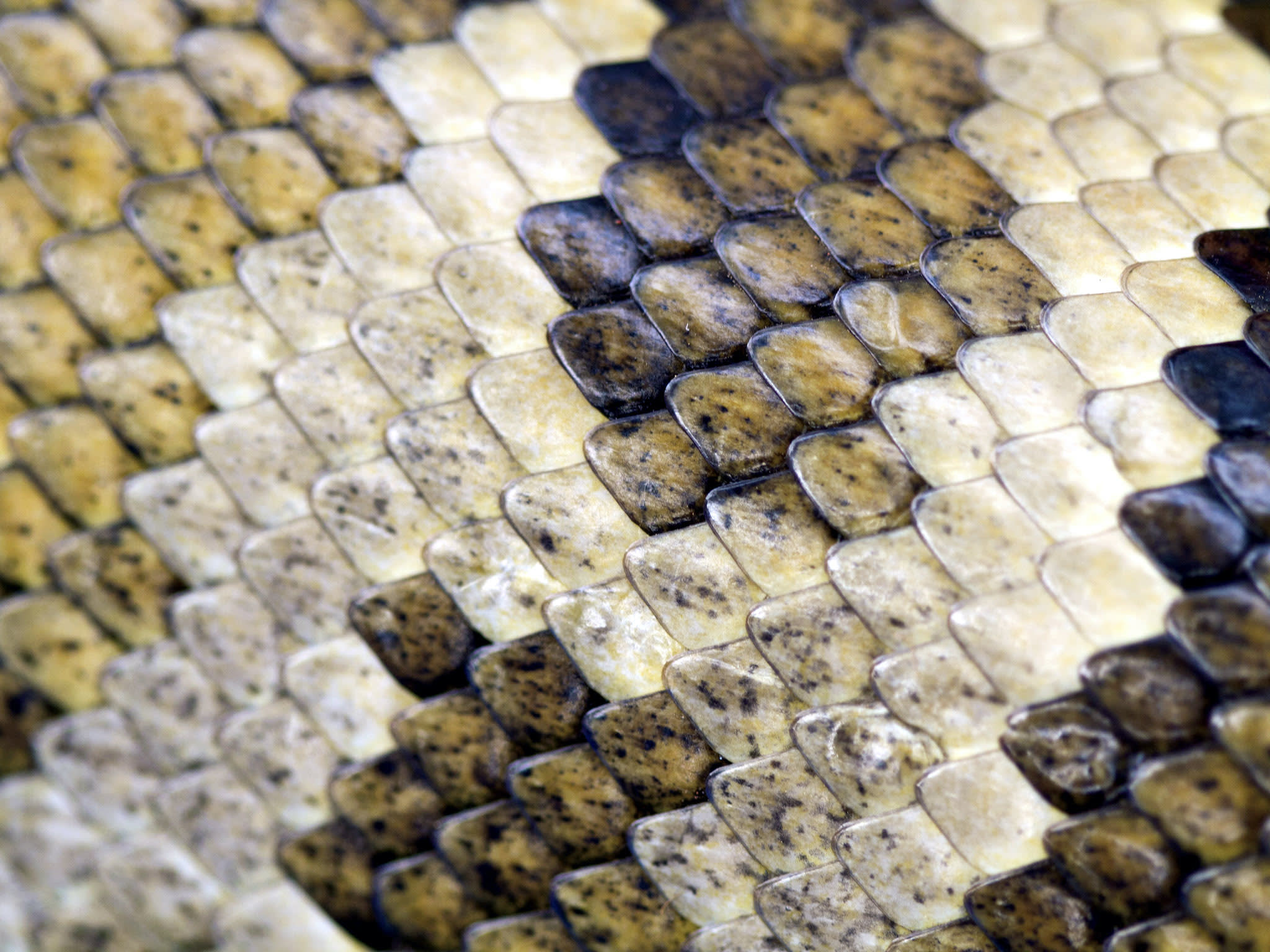 (Left) The Indian rock python is easily recognised by an arrow-shaped pattern on its head. (Right) It has shiny, smooth scales, each coloured in a single shade, that come together to form an attractive mosaic pattern across its body. Photos: Nirmal Kulkarni

Pythons grow rapidly for the first few months of their lives. In captivity, they can double their lengths each month for the first two to three months! But that is probably because of copiously more feed and warmth than are available in the wild. Still, they should reach a little over twice and up to three times their birth length of just under half a metre in the first year.

Like all other snakes, they are particularly vulnerable as juveniles and are almost defenceless against most predators. Instead, they rely on stealth, finding the right place to live, and staying as hidden away as possible. Still, they fall prey to monitor lizards, various birds of prey, wild cats, mongooses and a host of other predators. Nobody really knows how many babies from each clutch will make it to adulthood. So, despite the massive clutch sizes, pythons aren’t exceedingly common anywhere in their range, which extends from the southern tip of India to the extreme West, and up to the Mahanadi in the north.

However, predation has not been their biggest threat. The rock python’s size and exquisite skin made it a target for human vanity and greed. Until the mid-70s there was rampant trade in snakeskins, and python skin was the most coveted. Romulus Whitaker tells stories of skin markets where he’d seen dozens of python skins on sale. Although alarming, this was nothing compared to the thousands of skins that would have been processed in the larger leather factories of the time. Combine this unchecked harvesting with huge landscape-level change and degradation, and the python, like so many other species, faced almost certain extinction until the formulation of the Wildlife Protection Act (WPA) in 1972.

The Indian rock python lives a solitary life but is found in pairs during the breeding season. This juvenile was photographed in Aarey Milk Colony, Mumbai. Photo: Rajesh Sanap

In India, the python has the highest level of protection under Schedule 1; the same level of protection as a tiger. Sadly, this doesn’t translate to functionality and pythons are still killed on sight in many places. Even with the intent to protect them, pythons are often caught in one location and shifted to forested areas because people believe that’s best for these snakes. This is detrimental to most snakes and should be avoided at all costs. There is no need to ever move a python from where it is found. People need to learn that their fear is not reason enough to make decisions about the future of wild animals; the truth is there is no risk to human life or property because of the presence of a python.

The sighting of a python is quite a novelty nowadays. However, historically, they would have been very common in many places and an integral part of most wetland and riverine ecosystems. In the Keoladeo Ghana National Park, pythons commonly bask on the banks of the river. They’re also known to share hibernacula (place of hibernation or shelter), such as porcupine burrows, with numerous individuals. This would have been a universal sight along river systems all over the south, especially the slow moving rivers through the plains. 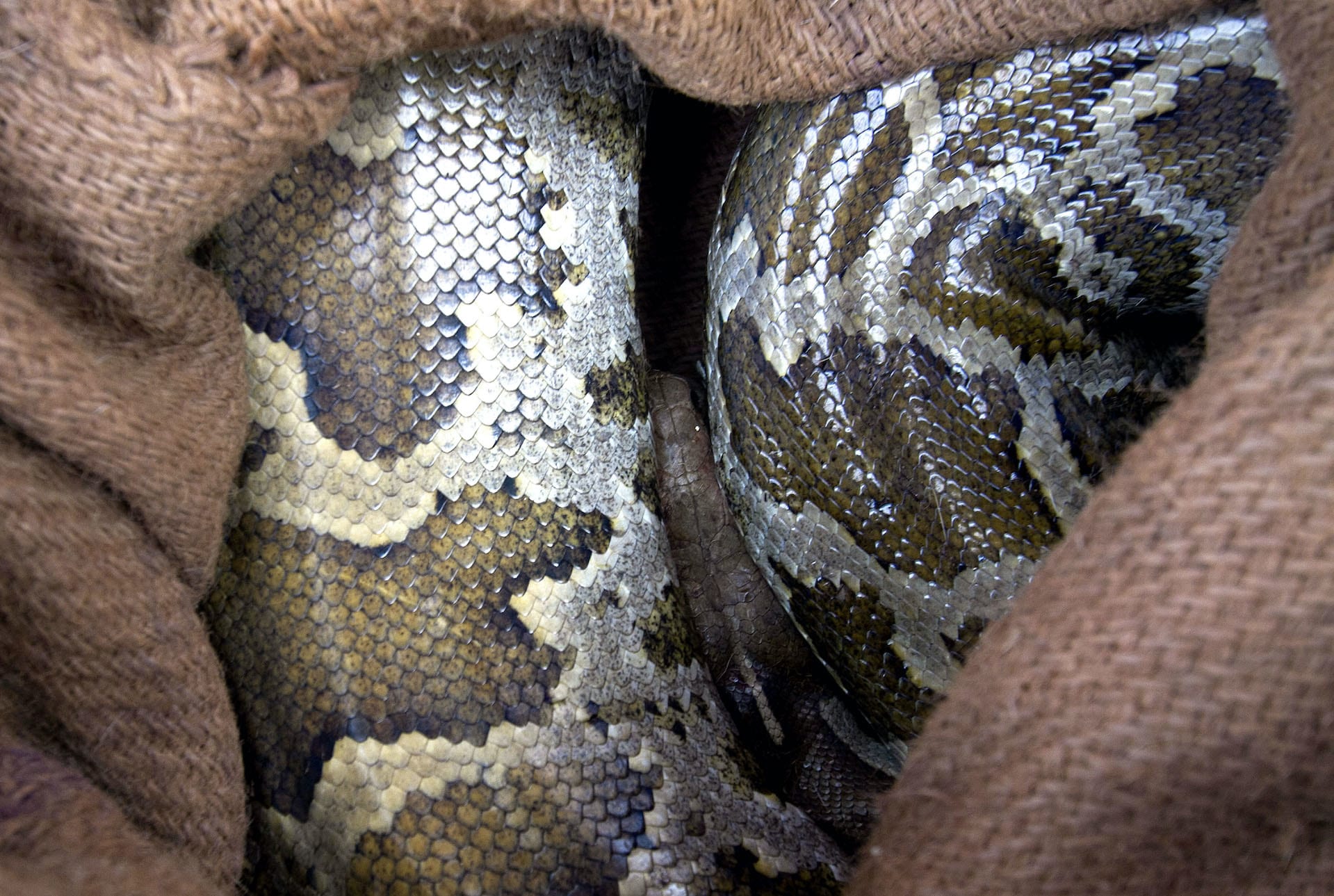 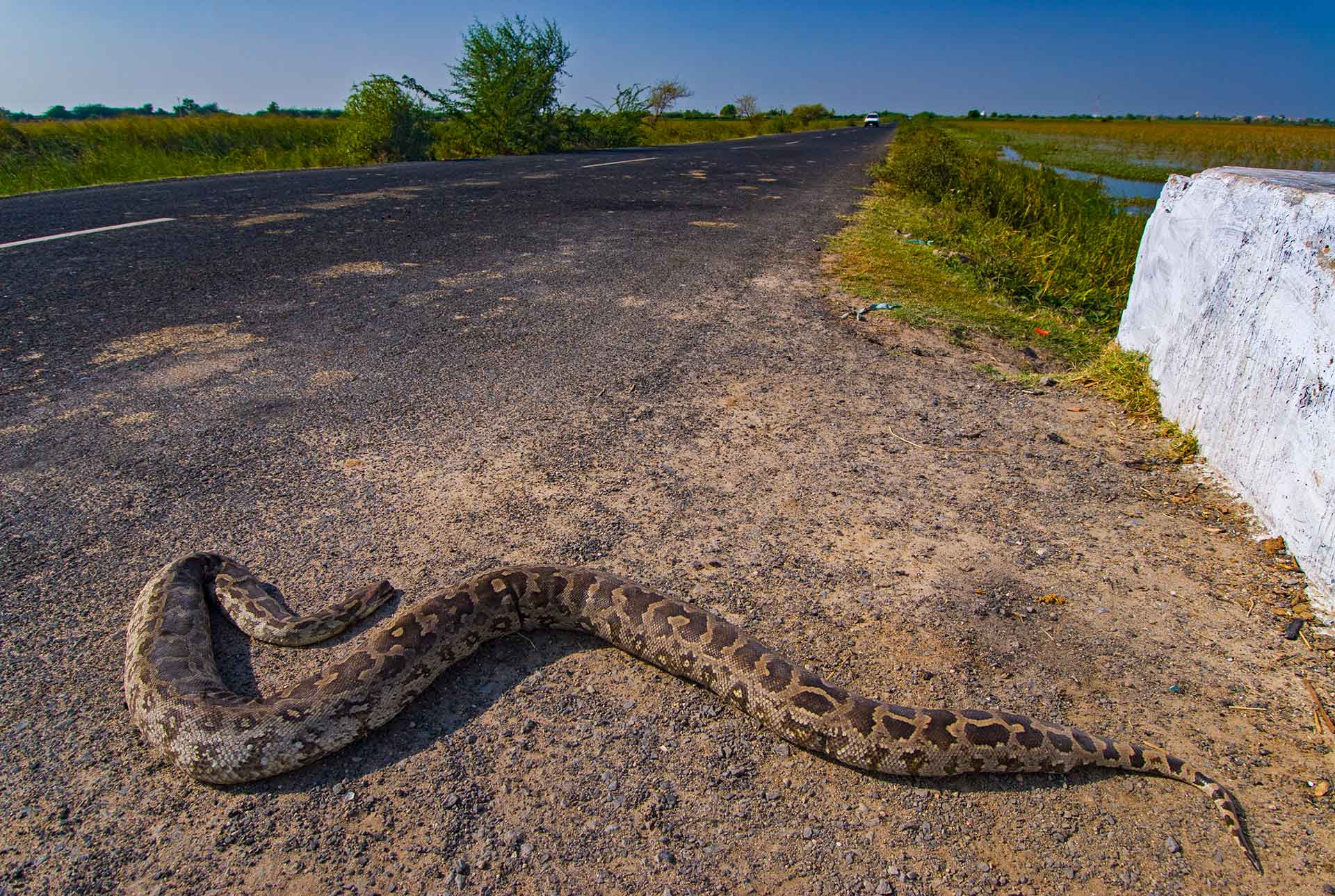 Indian rock pythons are beneficial to humans and keep our rodent populations in check. However, despite this, they are deeply misunderstood. (Left) A rescued Indian rock python. (Right) An Indian rock python killed by a vehicle on a road that cuts through the Rann of Kutch.
Photos: Nirmal Kulkarni (left), Dhritiman Mukherjee (right)

I live on the banks of a large lake and have often fantasised about sighting a python or crocodile along the edge. Sadly, there is only one reason why this isn’t a reality: the lack of human tolerance for anything we fear. Our condescending and exploitative view of the world around us not only makes the survival of these incredible species uncertain but also ends with us shooting ourselves in the foot. Like so many other aspects of conservation, ensuring the survival of the Indian rock python is beneficial to us. It is a species that controls a host of agricultural pests from rats to nilgai, and as such, should be welcomed into fields. However, stigmas and fears lead to the decisions we make about wildlife, and we’re left with less hope for the future.

Still, if we can open our minds to the truth, that what’s best for nature is most often what’s best for us, my dream of seeing a python half-submerged on the edge of the lake, waiting for an unwitting bird or boar, may still turn to reality.