The unique dietary habits of vultures make them critical to many ecosystems, but also susceptible to the fatal effects of harmful chemicals consumed by other animals 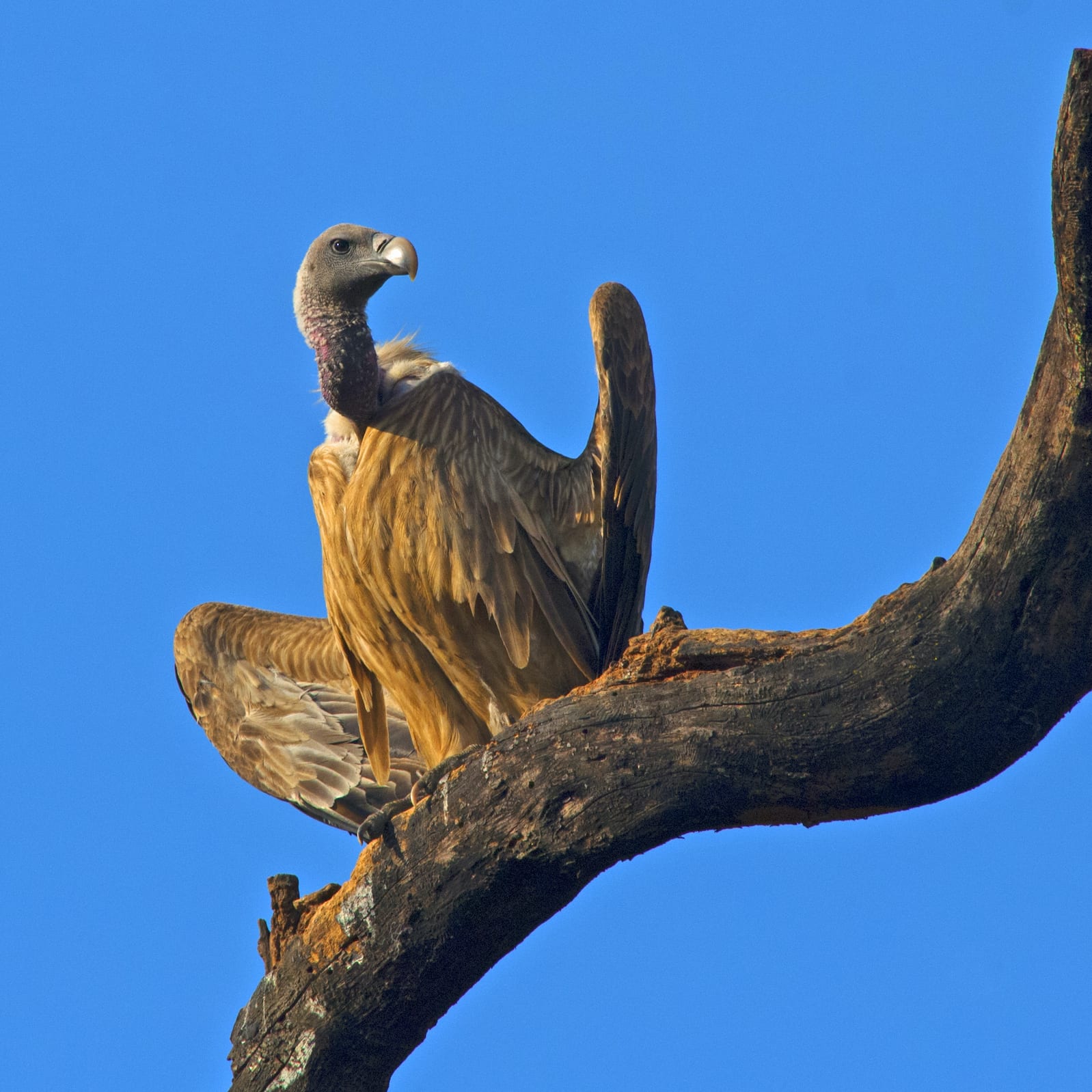 On an oversized boulder in Ramadevarabetta Vulture Sanctuary, two dehydrated birders sat pondering in unison: “How do they spot carrion from all the way up there?” The surreal sight of an Indian vulture (Gyps indicus) on its perch is only surpassed by the sight of it painting spirals as it ascends into the sky. Carrying about six kilos of mass and a wingspan of up to 7.5 feet, these birds are designed to glide. As obligate scavengers, they have evolved to soar at great heights with little effort, scanning the ground for animal carcasses. Ruppell’s vulture (Gyps rueppelli) from Africa, a contemporary of the Indian vulture, is considered the highest-flying bird that once collided with an aircraft 11.3 km above sea level. While Indian vultures do not soar to these heights, they typically operate several kilometres above ground. From these heights, they use their keen eyesight to look out for a carcass, or for fellow vultures who may have found a potential meal on the ground. Their eyes have high spatial resolution. Spatial resolution refers to the level of detail seen from a distance and is measured in cycles/degree. Gyps indicus has visual acuity of 135 cycles/degree. For perspective, when a human demonstrates 20/20 vision, this translates to 30 cycles/degree.

When Indian vultures do chance upon a carcass, they devour vast quantities of flesh. Sharp beaks pierce through the animal’s skin and grooved tongues cut through chunks of flesh. A neck and crop capable of storing up to 1.2 kg ensure the dine-in experience is followed by plenty of takeaway. These vultures are known to feast on soft tissues like muscle and visceral organs at an impressive pace. A group of griffon vultures can consume all the soft tissue of a twenty-kilo gazelle in about eight minutes! This flesh is often a hotbed of bacteria. However, nature’s finest waste management specialists are equipped with robust immune systems and highly acidic stomachs (pH 1.0), which kill bacteria and neutralize pathogens. The unique dietary habits of vultures make them a critical part of many ecosystems. They clear vast quantities of flesh from deceased animals that would otherwise rot and generate dangerous pathogens that could have devastating effects on other animals. 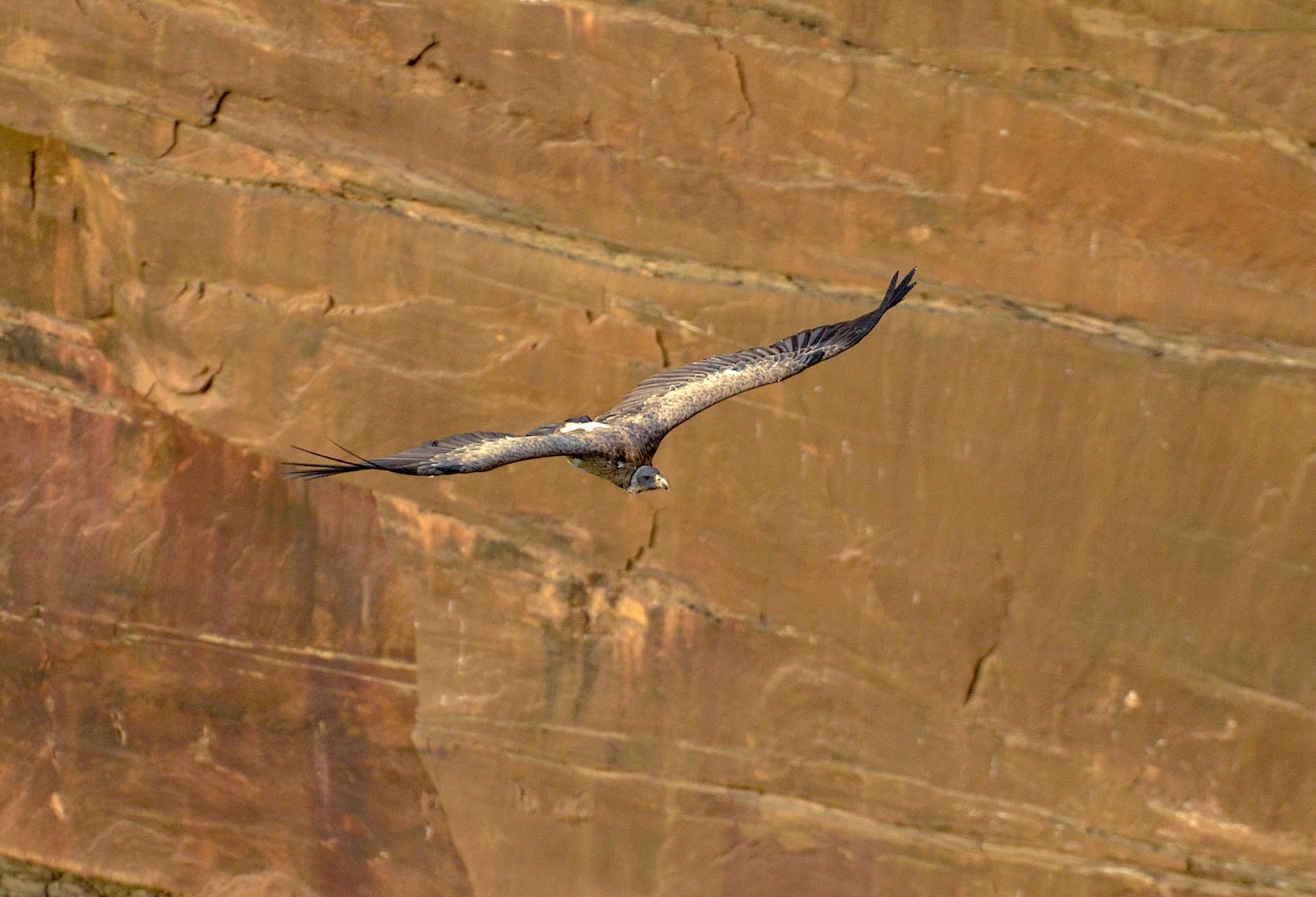 The Indian vulture is a medium-sized vulture with a wingspan of around 1.96 to 2.38 m. Its pale underparts and underwings stand in sharp contrast to its dark flight feathers when it soars in the sky. Photo: Durgesh Kumar Singh

Human beings have shared a long, rich history with vultures. The Zoroastrian Parsi and Vajrayana Buddhist communities have also culturally integrated the vulture’s role into their funerals. They place bodies of the recently deceased in sacred burial grounds where vultures can access and consume them. Indian mythology has many references and stories about vultures. In the Ramayana, for instance, Jatayu the mythical vulture sacrificed his life to try and save Sita. His brother Sampati, the vulture king of lore, helped Lord Rama and his army find Sita.

However, our relationship with vultures in India took a turn for the worse towards the end of the 20th century. Populations of the Indian vulture dwindled through the 90s until a whopping 97 per cent were gone. The cause? Diclofenac, an anti-inflammatory drug that was used to treat cattle. The drug was often administered to diseased, malnourished, or old livestock. Gyps vultures are known to feed on the carcasses of these animals. Even trace amounts of diclofenac cause renal failure and prove fatal to these giant birds. Despite the ban on veterinary use of diclofenac in 2006, big pharma companies continued to produce multi-dose vials of 30 ml for “human use”. Following the efforts of conservationists, this sinister bypass was banned as well. However, veterinarians were quick to adopt alternatives like aceclofenac that metabolise into diclofenac and have the same fatal effect on vultures. As many as six non-steroidal anti-inflammatory drugs (NSAIDs) used in veterinary treatment over the past two decades were found to cause visceral gout in vultures.

Ramadevarabetta Vulture Sanctuary was created in Ramanagara, Karnataka in 2012, to help boost vulture populations. This is a protected area of 346 hectares located beside the rapidly urbanising Bangalore-Mysore highway. A view from the hilltop of Ramadevarabetta offers a peek into the larger issue of unprecedented fragmentation of wildlife habitats that plague our wilderness areas. Too many natural habitats regularly make way for development projects and wild animals are forced out of their homes. The total population of Gyps indicus in the sanctuary now hovers dangerously around just five individuals. While we continue to deplete their habitats, there are efforts to revive populations in captive breeding centres. Breeding centres provide these birds a safe space to mate. The Indian vulture is a focused parent who lays a single egg that is incubated for around 60 days in the wild. However, vultures born in secure nesting sites still need access to vast habitats free of chemical traps.

Indian vultures have suffered severe decline in their population from consuming the veterinary drug diclofenac present in cattle carcasses. These vultures, one alive and the other dead, were spotted in Ramanagara. Photo: Shashank Dalvi

SAVE (Saving Asia’s Vultures from Extinction) a consortium of conservation organisations, has developed a series of initiatives to help educate local communities and livestock owners around critical vulture habitats about the catastrophic effects of NSAIDs like diclofenac. It will likely take the collective success of breeding centres, public engagement, and those fighting to preserve crucial habitats to help the Indian vulture slowly glide back from the brink.

is a PhD student interested in Indian savannas and human-wildlife relations research. Besides academics and field research, she loves cities and thrives on conversations with friends over tea/coffee.