In Odisha’s Chilika Lagoon, researchers have confirmed that dolphins do assist fishers in getting a good catch 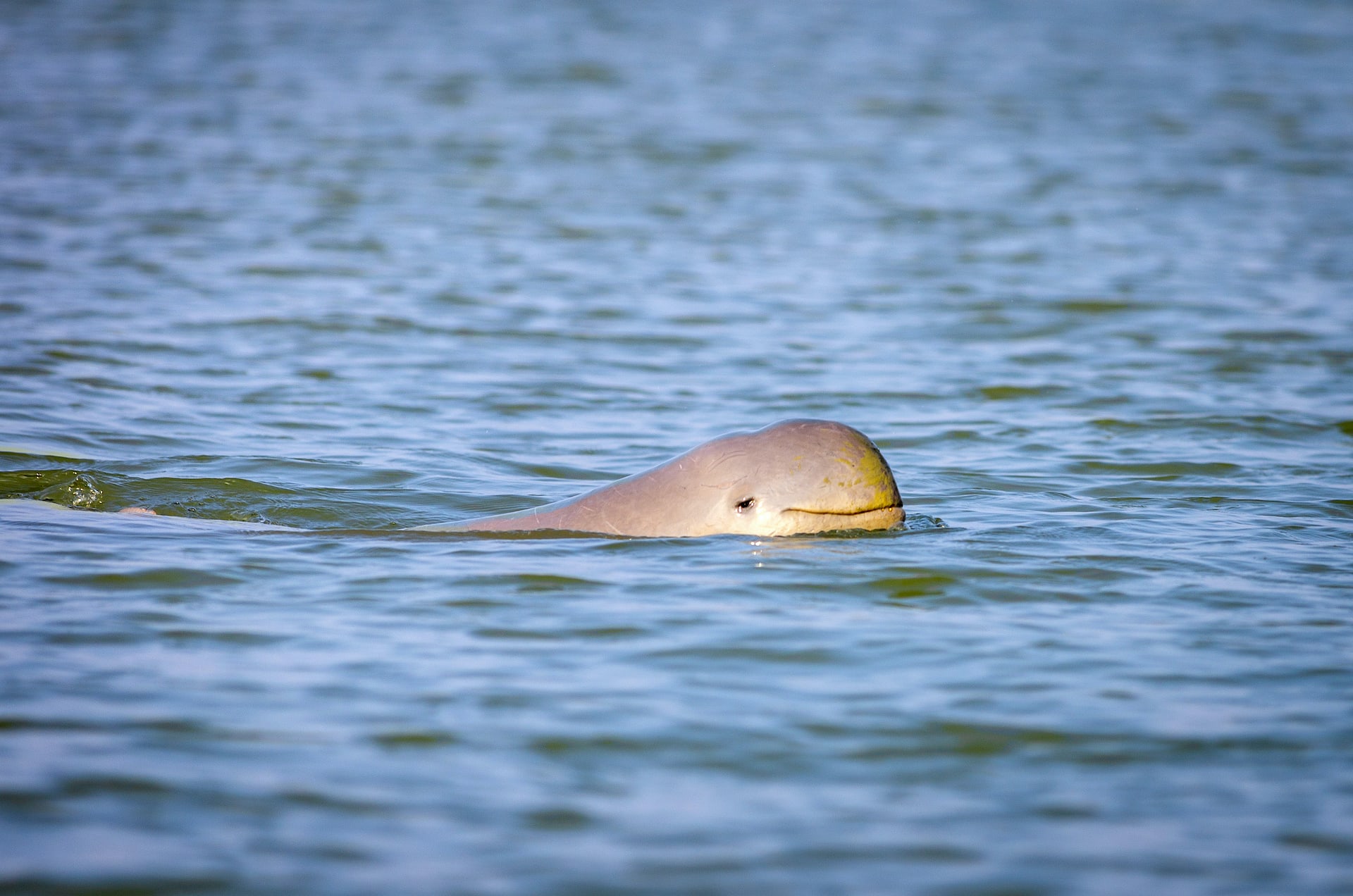 For a globally endangered and evasive wild species, Irrawaddy dolphins (Orcaella brevirostris) are reasonably easy to sight in the Outer Channel of Chilika Lagoon. Back in 2007, during one of my first few vessel-based surveys to record the behaviour of the dolphins in the Outer Channel, I was fortunate enough to have a very close encounter with a juvenile. The animal swam right up to where I was standing on the deck of a small fishing vessel, spyhopped, (with half its body upright and out of the water), looked at me straight in the eyes, and spat out a jet of water. At the time, I was both shocked and awestruck. The encounter was too sudden and close to capture on camera, yet the comfort and proximity with which it approached our small vessel was indeed remarkable for a wild animal.

Chilika, located on the east coast of India, in Odisha, is Asia’s largest brackish water lagoon and extends over an area of approximately 1000 sq km. The Outer Channel region of Chilika, which connects the lagoon to the Bay of Bengal, is approximately 32 km long, and has a high density of both fishers and Irrawaddy dolphins. The dolphins within this region are often seen swimming near fishers, feeding near and at the stake nets (nets tied vertically to the stakes) placed to trap fish during the tide. This behaviour could very easily have been perceived by fishers as stealing, as clearly the dolphins feed off fish that is otherwise meant to get caught in stake nets. Yet our interview surveys across 30 fishing villages in the Outer Channel region showed that most fishers, particularly those from traditional communities, who fish regularly alongside dolphins in the lagoon, believe that the dolphins help them catch fish. Local folk legend has it that the Goddess Harchandi (the water goddess who protects fishers at sea) had sent dolphins to the lagoon to help fishers catch fish. Our research team observed dolphin behaviour here during the winter months, over four field seasons, and compared the catch per unit effort of stake nets where dolphins did and did not fish. 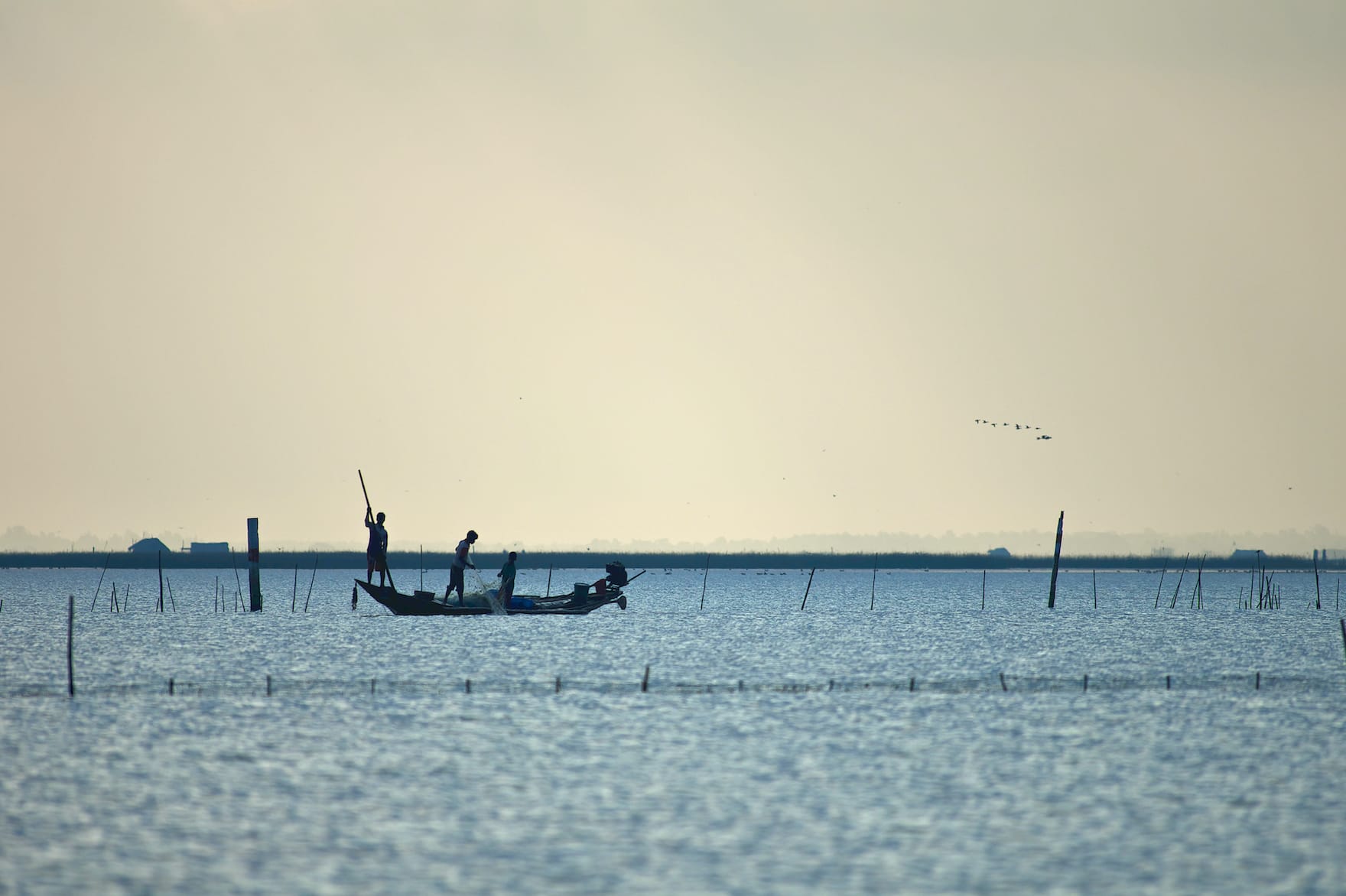 Fishers have observed that the Irrawaddy dolphins chase shoaling fish like mullets towards the stake nets, thus helping them get a good catch.
Cover photo: A high density of Irrawaddy dolphins (Orcaella brevirostris) is found in Chilika, a brackish water lagoon in Odisha. These dolphins are usually slate grey.

We found that within the Outer Channel area, Irrawaddy dolphins spent a large proportion of their time foraging for fish, and much of this time was spent herding fish towards fixed stake nets, using them as a barrier to catch fish. The results of our catch per unit effort measurements from stake nets were closely analysed. We found that catches in the presence of foraging dolphins specifically had higher amounts of mullet in them – which are locally preferred species, and thus were more lucrative on an average than catches measured in the absence of foraging dolphins. Although Chilika hosts a diversity of fish species, and the dolphins do feed on a number of these species, mullets being a shoaling species (swimming together in groups) are easy to herd towards nets, besides being tasty to both dolphins and fishers.

The fishers’ perceptions were therefore rooted in their lived experience and were likely influenced by ecology, socioeconomics, and culture. Local fisher perceptions that Irrawaddy dolphins benefit them were found to be true, and likewise, Irrawaddy dolphins too benefited from fishing at stake nets, which is likely the reason why they are relatively easy to spot in the Outer Channel region. This mutualism between fishers and Irrawaddy dolphins seems to have evolved over time. Traditional fishers talked of a time when they used a cotton filament drag net called “khaddi jaal“, claiming that they would call out to the dolphins who would help herd fish into their nets. While the khaddi jaal or dragnets are no longer used in Chilika, the mutualism between dolphin and fishers remains strong.

Mutually beneficial interactions between Irrawaddy dolphins and fishers are not unique to Chilika lagoon. Similar activities have been previously reported from other locations, like the Ayeyarwady River in Myanmar and the Mekong River in Laos, where Irrawaddy dolphins are critically endangered. 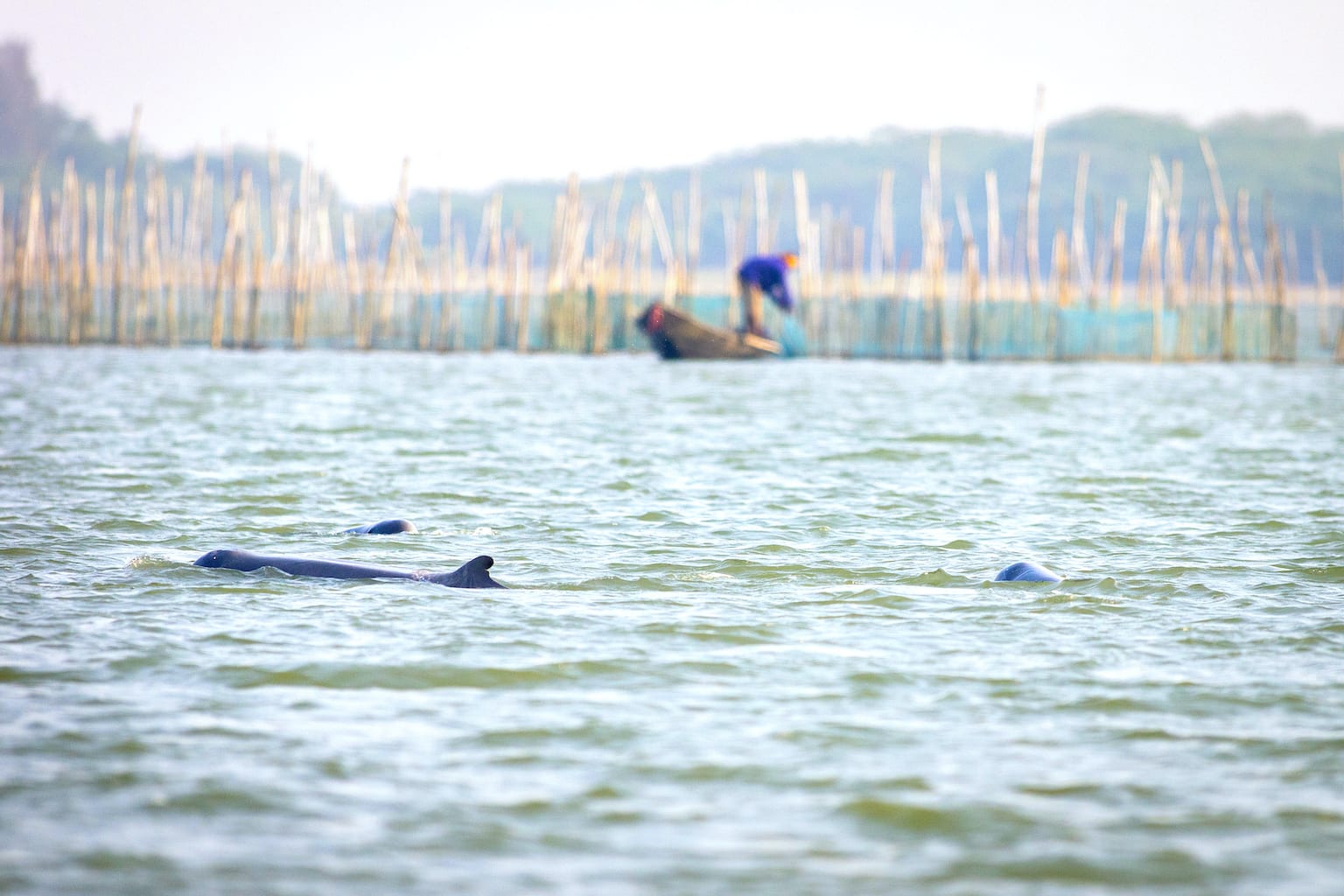 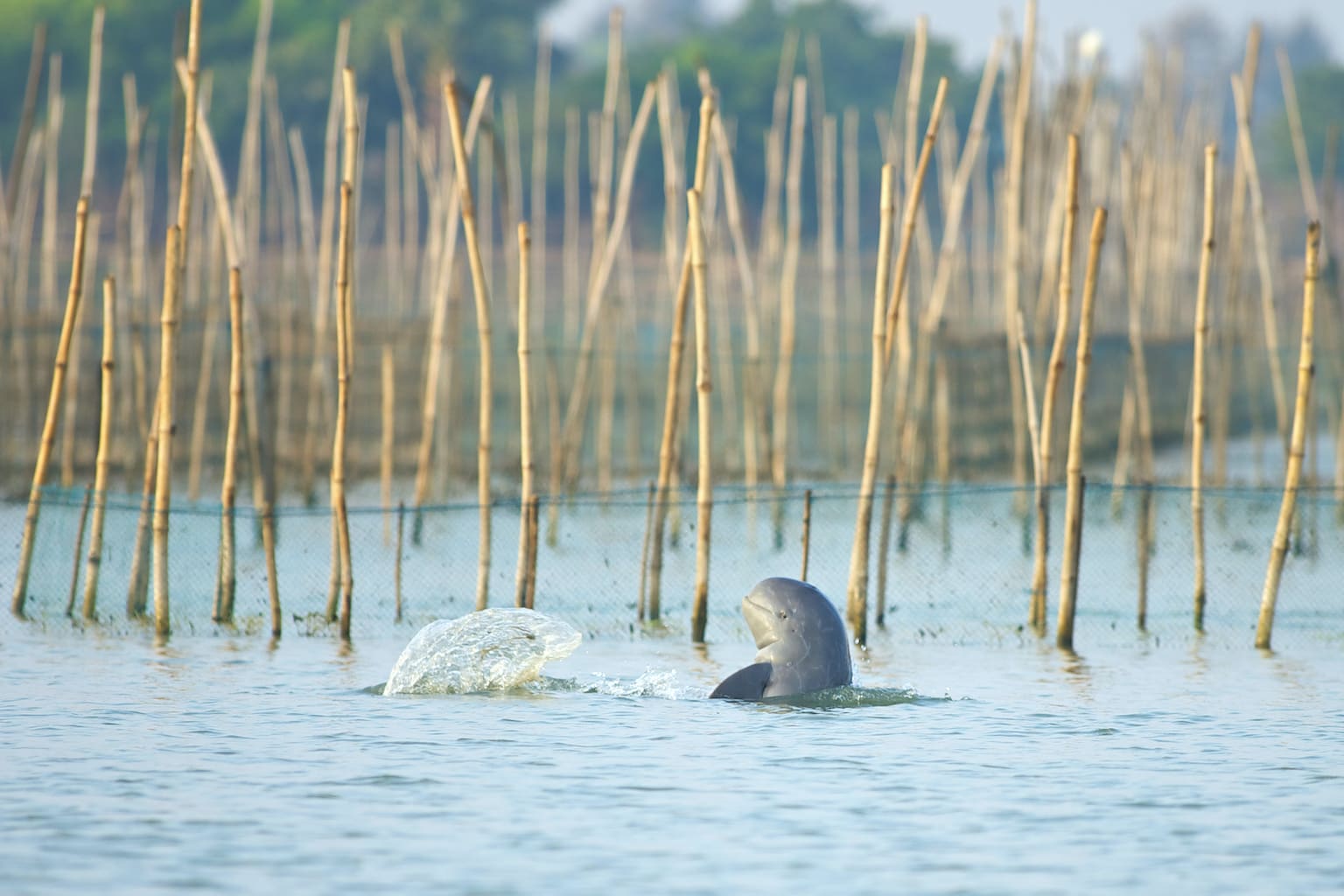 (Left) Irrawaddy dolphins are visible in the foreground with a fisher on his boat setting his stake net in the background. (Right) Stakes hold the vertical fishing nets in place.

In addition to changing fishing practices, the exponential and unmanaged growth of the dolphin watching tourism industry threatens to undermine the harmony between dolphins and fishers. In Chilika’s Outer Channel, dolphin watching tourism developed as an alternative livelihood, and grew from a handful of vessels in 2003 to over 900 vessels by 2013, recently reaching approximately 1,200 vessels.

Unmanaged wildlife tourism can have negative consequences for the conservation of the species concerned, especially when compliance to existing codes of conduct is low, and local governance of the industry is lacking. Tourism experiences promise close encounters with breaching dolphins (breaking through the water’s surface). Irrawaddy dolphins are mostly evasive animals and often shy away from tourist boats that chase them. 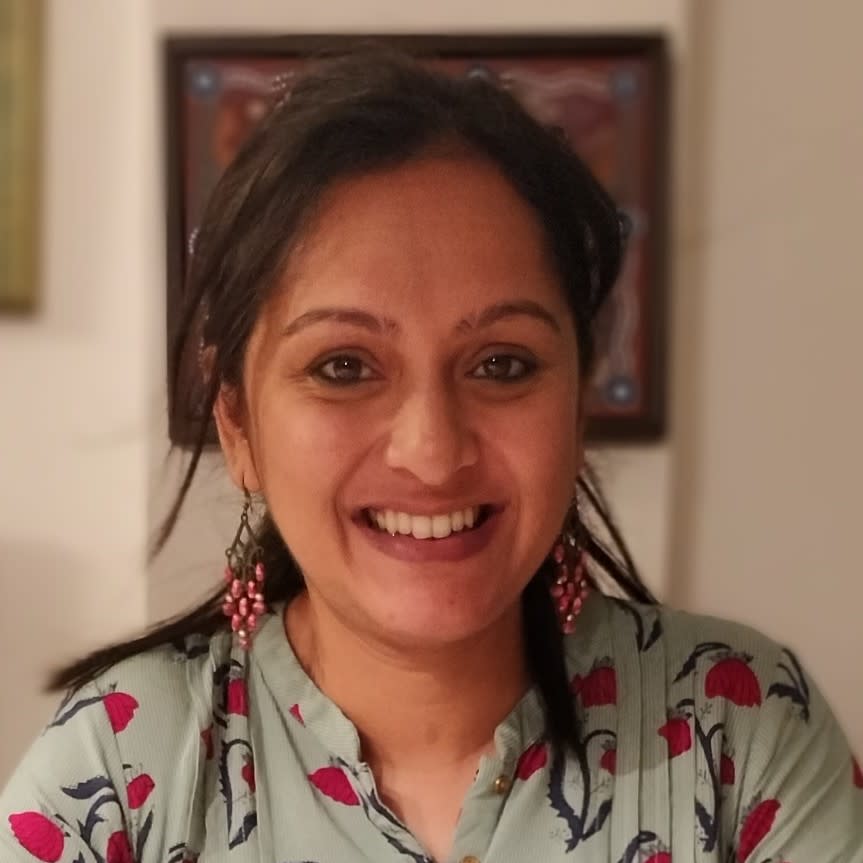 is from Goa, India, and has a PhD through James Cook University, Australia. She has studied and worked on marine conservation and fisheries sustainability issues for over 15 years.

is an Odisha-based naturalist and wildlife conservationist.