Elusive and endangered, the Irrawaddy dolphin inhabits a delicate ecosystem in coastal Odisha 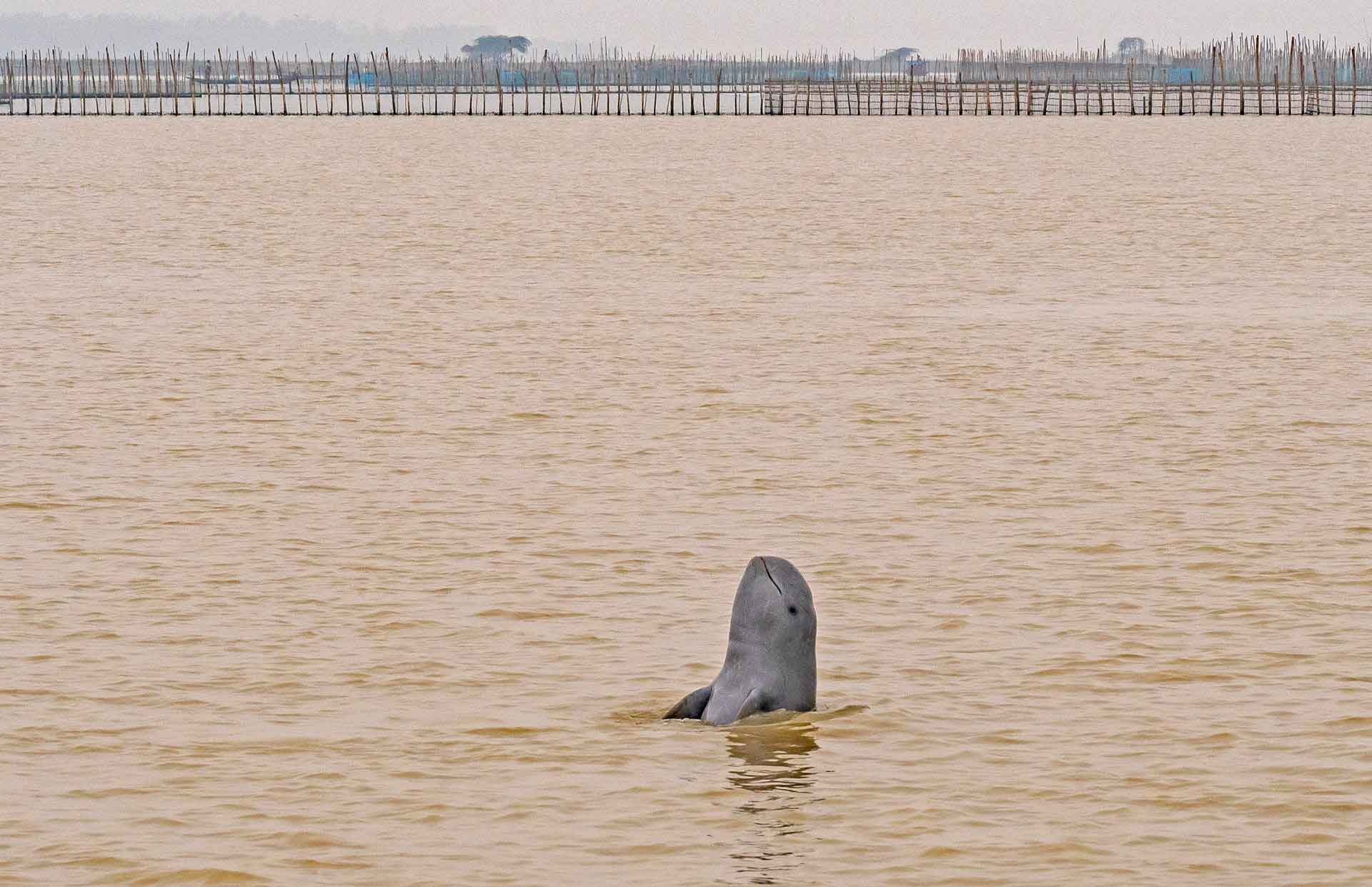 Just past noon, the tide is coming into Chilika Lake on Odisha’s eastern fringe, bringing with it prawns and fish from the Bay of Bengal. This is a choice meal for the Irrawaddy dolphins (Orcaella brevirostris) that inhabit these waters. In the hope of catching sight of them during feeding time, we hop on a boat and head into the Outer Channel of Asia’s largest brackish water lagoon.

Spread across 1165 sq km, Chilika Lake is a Ramsar Convention site, i.e. a wetland of international importance. Seawater from the Bay of Bengal mixes with the freshwater of the 52 rivers and rivulets that drain into the lake, resulting in a fine saline balance that supports a wealth of aquatic plant, avian, and animal life. Over 200 species of migratory and resident birds inhabit the lagoon, along with fish, crustaceans, and reptiles, but it is the endangered Irrawaddy dolphin that is the flagship species here.

Regular tourist boats depart on dolphin watching tours from Satapada on Chilika’s southern shores. In India, the cetacean is found only in Odisha and the Sundarbans, and globally, in pockets across Asia, from Bangladesh to the Philippines. A 2011 report by the Chilika Development Authority (CDA) states that the lagoon harbours the “highest single population” of the dolphin, and the 2021 census places their count at a 156. They are known to be a shy, elusive species, and sighting them is a matter of luck and chance. 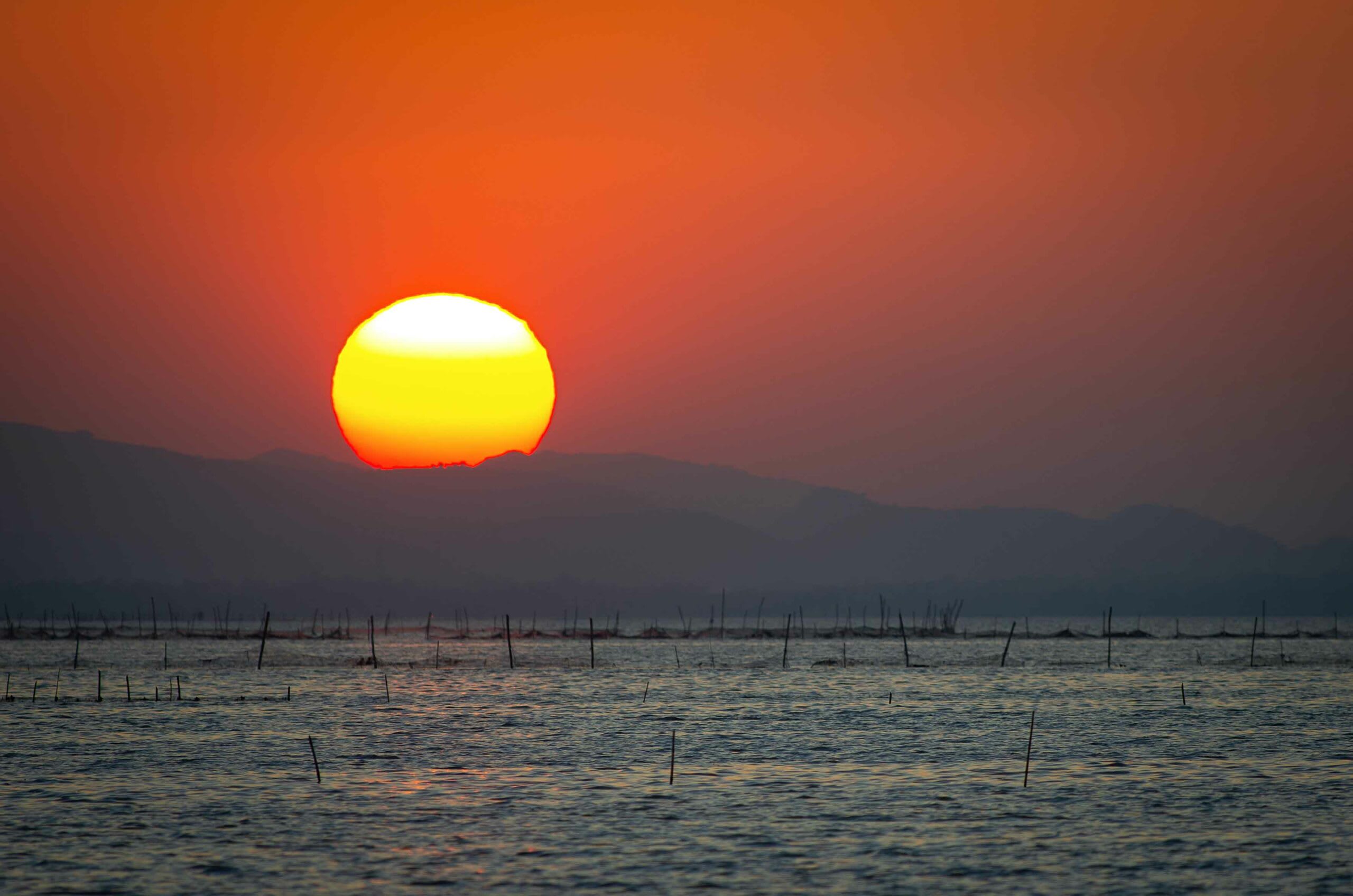 In the vast open water of the lagoon, sea and sky meet in an endless expanse of cement grey. In this monotone colour scheme, it is easy for the slate-hued Irrawaddy dolphin to blend right in. After an hour in the blazing overhead sun, every curl of water, every ripple on the lake’s steely surface tricks my eye into believing I’ve spotted a cetacean. Occasionally, the horizon is broken by pointy bamboo stakes erected to support vertical fishing nets.

A churn of water near a fishing enclosure leads the boatman to believe that a pod is hanging around the box nets. Sure enough, a dorsal fin breaks out of the water, followed by the flick of a tail. That initial sighting paves the way for an afternoon filled with blink-and-miss encounters, the dolphins belying their reputation as hard-to-spot creatures, and showing themselves, however momentarily, in large numbers.

Sleek grey shapes cartwheel through the water, offering glimpses of their small dorsal fins, bulbous heads, and rounded, almost porcine beaks. As social mammals, they hang around in pairs or threes, often living in pods of six to ten individuals. A young dolphin swims up closer to our boat than its parents, hovering nearby. Female Irrawaddy dolphins mature between seven to nine years and birth a single calf after carrying it for 10-14 months. 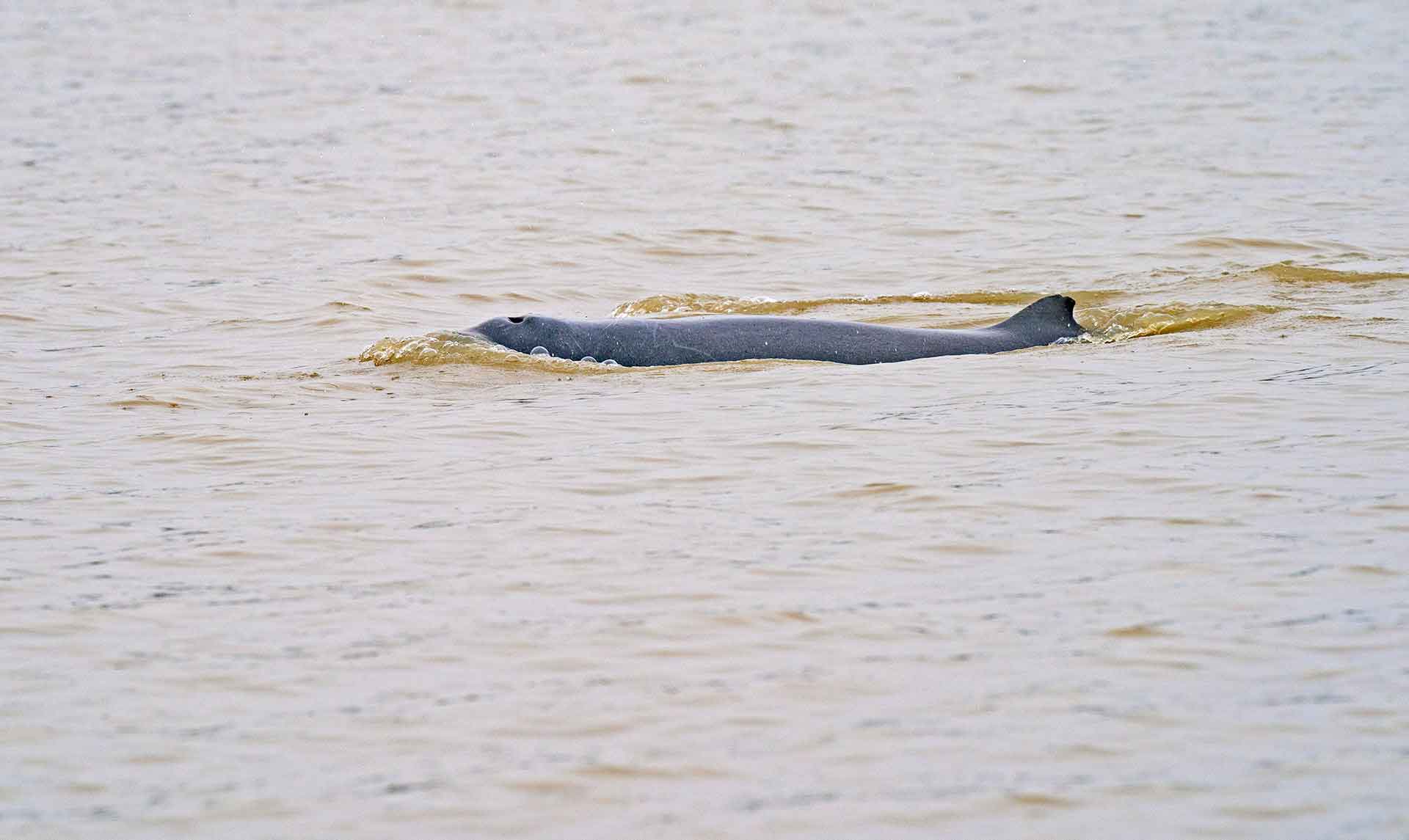 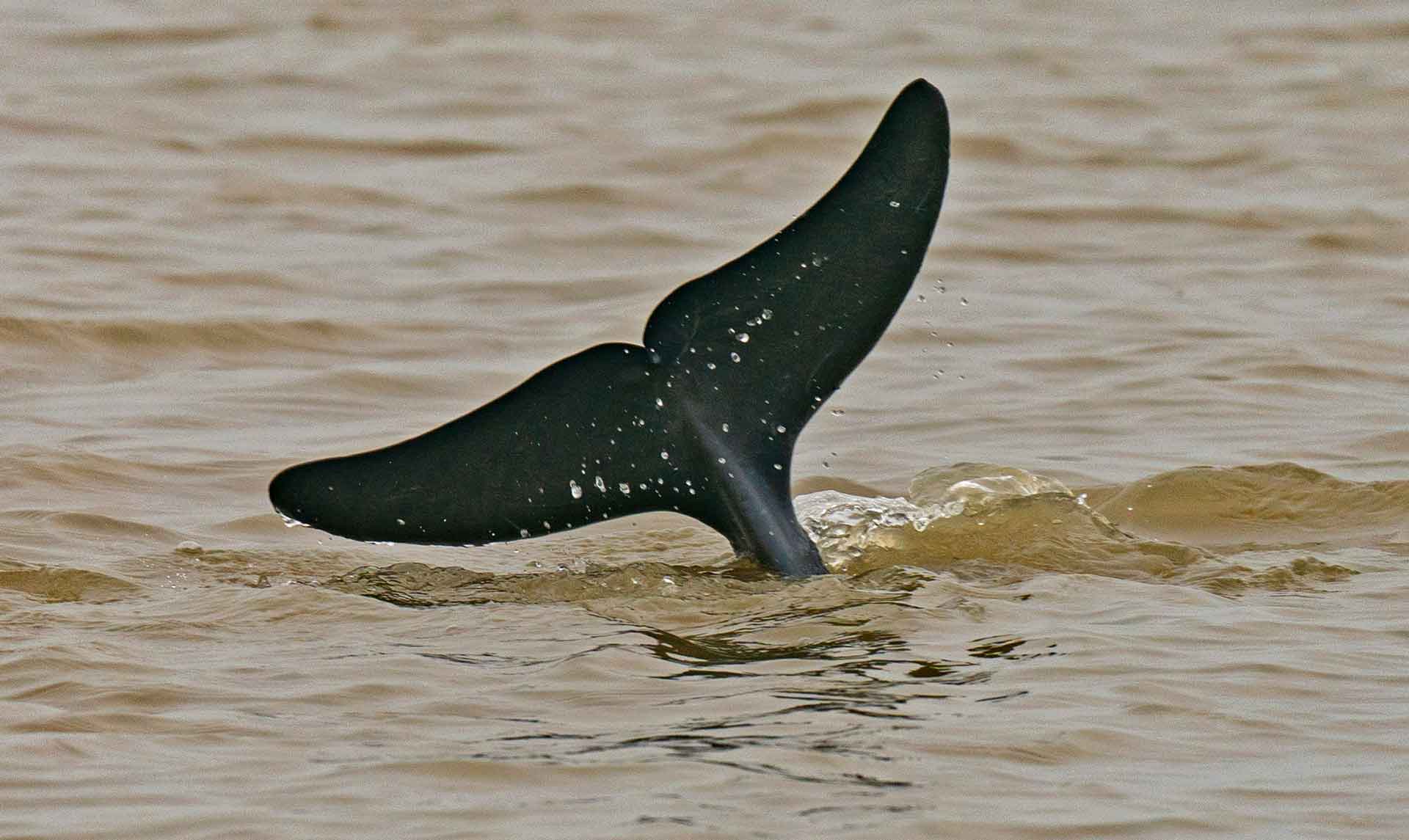 Irrawaddy dolphins are Chilika’s prime tourist attraction. However, they are quite shy and may not reveal more than a dorsal fin (left) or a tail fluke (right). Photos: Dhritiman Mukherjee

Irrawaddy dolphins are mostly graceful and quiet, but sometimes, they announce their arrival with flamboyance. The silence of the lake is suddenly interrupted by loud huffing sounds, like puppies panting after a run. A large pod of about eight individuals appears, coming up for air in great big gulps, their crescent-shaped blowholes clearly visible.

Motorboats close in on them from all directions, with visitors eager to spot the dolphins up close. I wonder why these shy creatures choose to live in a lagoon rather than in the open sea, away from human habitation. Dr Muntaz Khan, Assistant Professor of Zoology at Kalahandi University, who is working on Irrawaddy dolphin and cetacean research in Odisha, attributes this to three major reasons: shelter, year-round availability of food, and safe zones to breed.

As an enclosed area, Chilika is more protected than the open ocean. “These dolphins do not swim fast, plus their mouth is blunt, and they do not display aggressive behaviour. In the ocean, predators like sharks are a major threat,” he says. 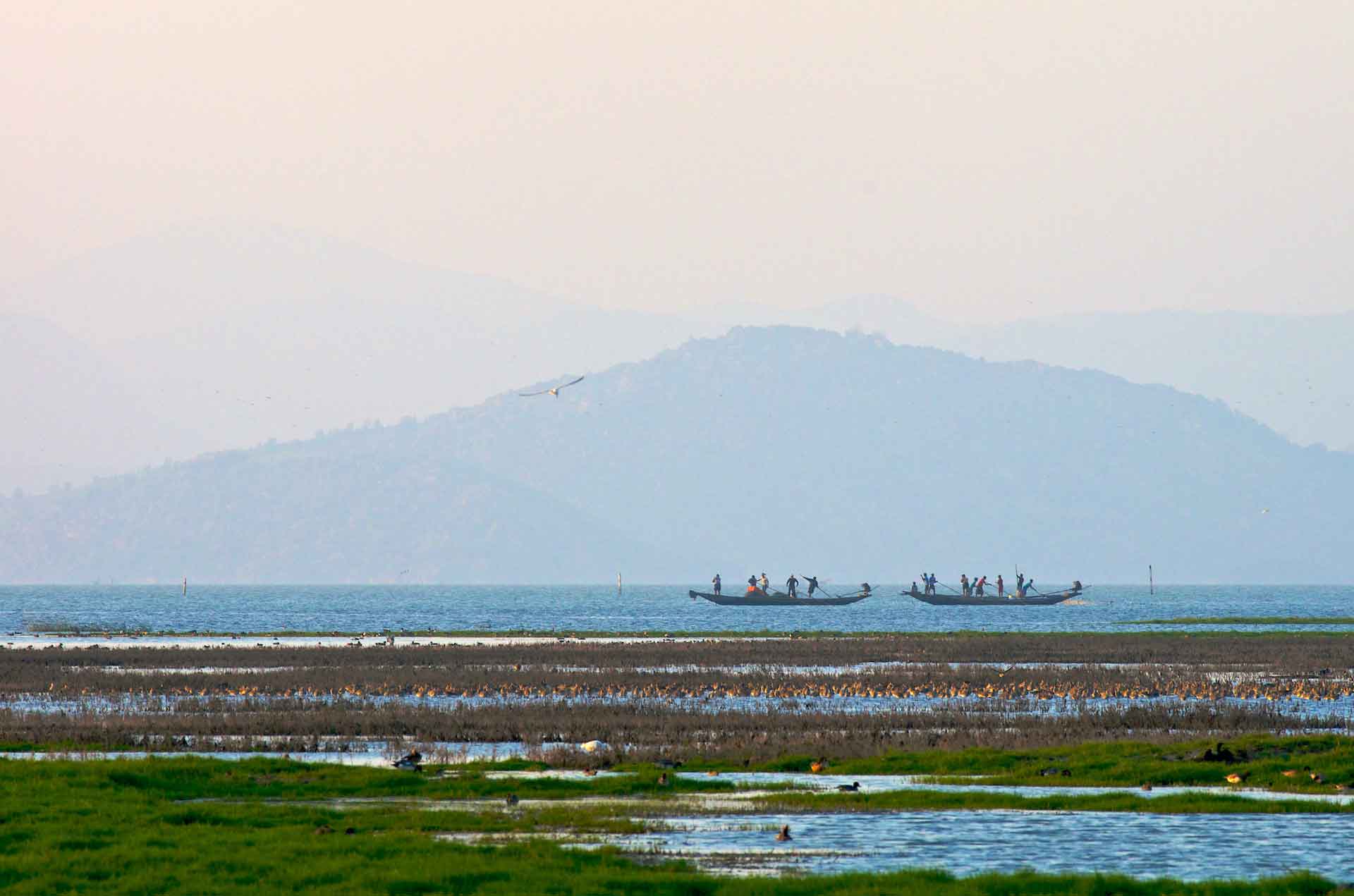 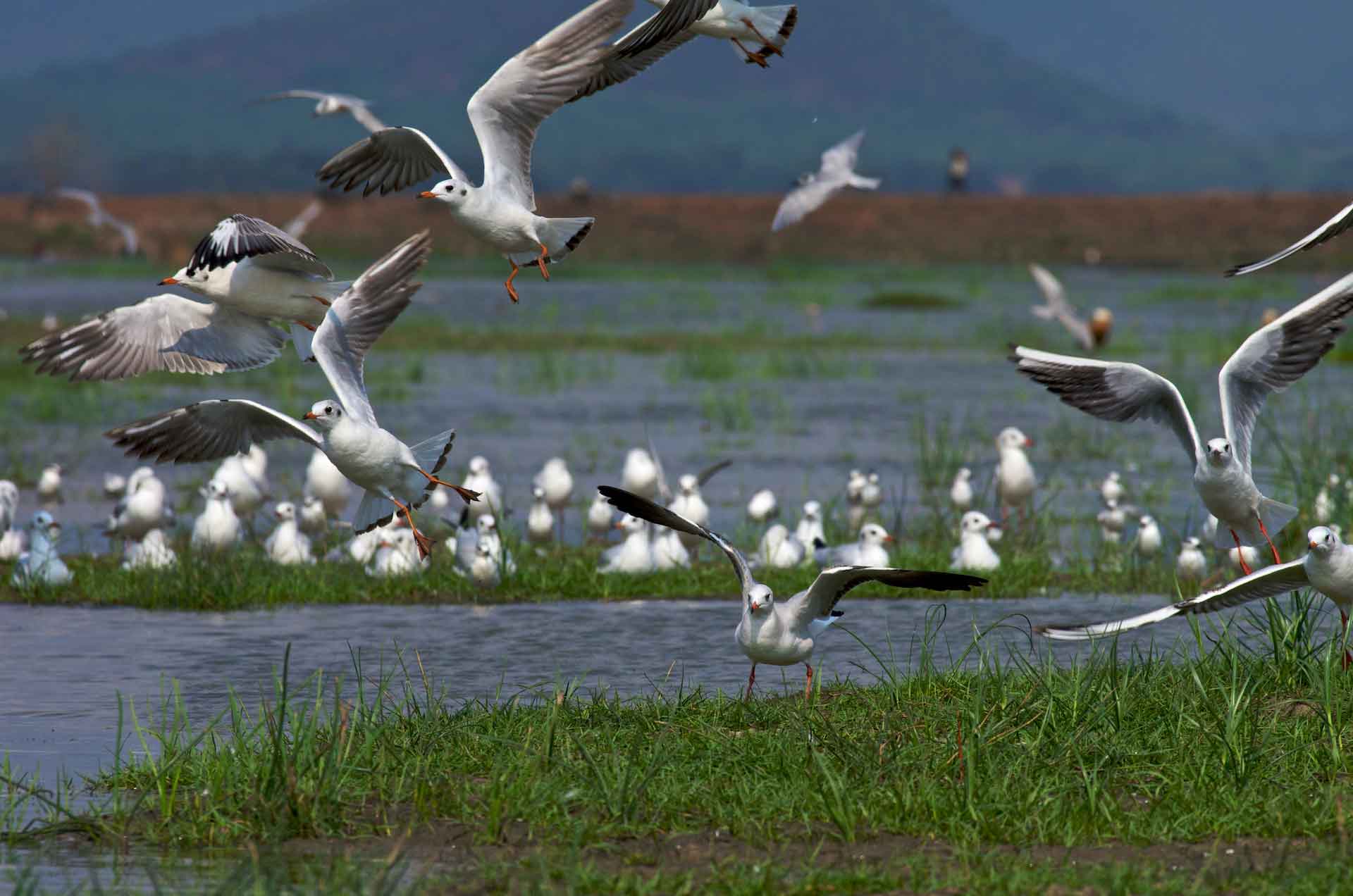 (Left) In many parts of their range, including Chilika, Irrawaddy dolphins are known to feed near fishers setting or retrieving their nets. (Right) Chilika is also the largest wintering ground on the Indian subcontinent for migratory birds such as these brown-headed gulls. To snag an easy meal, the opportunistic gulls occasionally follow dolphins hunting for fish just below the water surface. Photos: Aditya Panda

Food is also plentiful, with prey coming in from both rivers and the sea. “Irrawaddy dolphins prey on 40-45 species of marine and brackish water fish, but if freshwater fish are available, they will not hesitate to eat them,” says Dr Khan, adding that mullet is their favourite catch, and available year-round in Chilika Lake.

Sightings often occur around the fishing enclosures, and it seems like the fishers and dolphins compete for the same catch. But there is a long and mutually beneficial relationship between them.

Over the course of the afternoon, I am lucky enough to witness some incredible behaviours, including an open-water hunt.

Chilika lagoon is a wetland of international importance under the Ramsar Convention. It is separated from the Bay of Bengal by a small strip of sand. The old channel which connected the lagoon to the sea is known as Magarmukh (mouth of the crocodile). It is one of the areas of the lagoon that dolphins seem to prefer. Photo: Aditya Panda

When we spot a flock of seagulls hovering over a patch of water, we surmise that dolphins are feeding just below the surface, and the birds are waiting to swoop down and catch leftovers. Moments later, a pair of smiling, melon-shaped faces pop out of the water. For a split second, a male and female pair show themselves face first, demonstrating a clear view of the Irrawaddy dolphin’s unique, expressive mouth. In a stunning hunt, they proceed to chase a flopping fish along the lake’s surface, spitting water in great jets and even tossing the fish up in the air.

Later, Dr Khan explains that this behaviour is standard hunting MO. The dolphins thrash their tails, spit water and toss their prey to stun them and draw them out of shallow water zones.

A steady supply of fish is essential to the cetacean’s survival and their harmonious coexistence with fishers in Chilika Lake. In the ‘90s, this delicate balance was threatened when the Magarmukh channel, which connected the lagoon to the sea, began to close up with silt deposits. As the influx of seawater reduced, the makeup of the lake changed drastically and began to transform it into a freshwater ecosystem, resulting in huge losses for fishermen, and also reduced food supply for the dolphins. 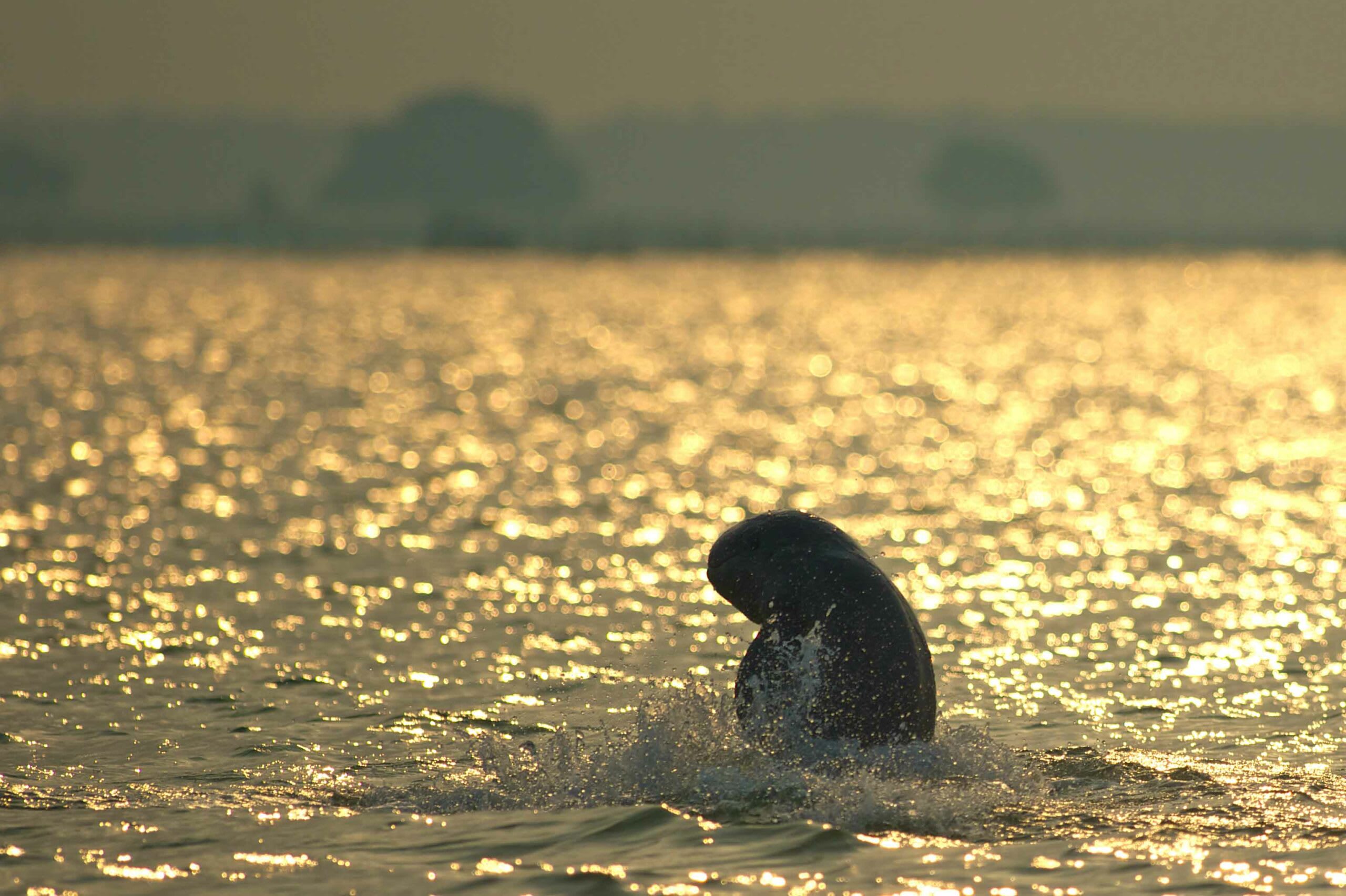 Eviction of illegal fish enclosures from the lagoon has resulted in a rise in the Irrawaddy dolphin population in Chilika. Forest officials counted 156 of these dolphins during a population estimation exercise in 2021. Photo: Aditya Panda

In 2000, a survey conducted by biologist Dr RK Sinha, often referred to as the “dolphin man of India”, estimated the Irrawaddy dolphin population in Chilika Lake at 31.

The CDA conducted a dredging operation in 2000 to open a new sea mouth and restore the lake’s balance. Even today, channels are regularly dredged and expanded to allow dolphins free movement and a steady inflow of seawater and freshwater.

After opening the new sea mouth, the first dolphin census conducted by the CDA in 2003 placed their population in Chilika lake at 89.

Early the next morning, I come armed with expectations after the previous day’s glorious sightings. The conditions are perfect — the tide is high, winds are low, it’s warm and sunny, and there’s no crush of noisy tourist boats at 7 am. For four hours, we cruise the lake, hitting all the dolphin hotspots known for feeding and breeding — the Magarmukh channel, the sandbar strip at Rajhans Island, even the main lagoon full of box nets where the cetaceans like to feed. We wait at a channel known for dolphin movement, the boatmen certain that we will come across them soon. But there is no sign of life, no gulls to indicate any movement below the surface, no telltale splashes of water, no sight of a dorsal fin, tail, or snub nose. It was a perfect day to see Irrawaddy dolphins, but they chose to remain elusive.