Leap of Faith: The Magical World of Jumping Spiders

These creatures are a highly adaptable species of spider with advanced vision, and can be found from the freezing-cold high Himalayas to the arid, baking desert of Rajasthan

Text and Photos by Samuel John

Have you ever watched a nature documentary and wished you could be in the midst of the action? Watching a predator patiently stalking its prey, studying each move, and when the time is just right, pouncing with the precision only evolution could engineer? The next time you see a jumping spider around your home, garden, or while out on vacation, this wish may very well come true.

With over 6,000 species of jumping spiders recorded across the world, they are found in a wide range of habitats. Their advanced vision, ability to leap great lengths, and adaptability to their environment makes them formidable predators. In India, they are found everywhere, from the deserts of Rajasthan to the mountain ranges of the Himalayas.

A two-striped jumper Telamonia dimidiata on the lookout for its next meal. This spider can often be found resting on the under surface of leaves. Cover: A heavy-bodied jumper Hyllus semicupreus stalks prey. Jumping spiders belong to the largest and most diverse arachnid families — Salticidae.

I spy with my eight little eyes

Imagine a human comfortably crossing the length of a football field (approximately 100 m) in two quick jumps. At scale, the jumping spider achieves this with relative ease, with some species jumping up to 50 times their body length. However, before making this jump, the spider must determine if the subject it is looking at is potential prey, a predator, or even a rival. Studies have revealed that some spiders like the Portia fimbriata can make this assessment from about 47 body lengths (28 cm) away. 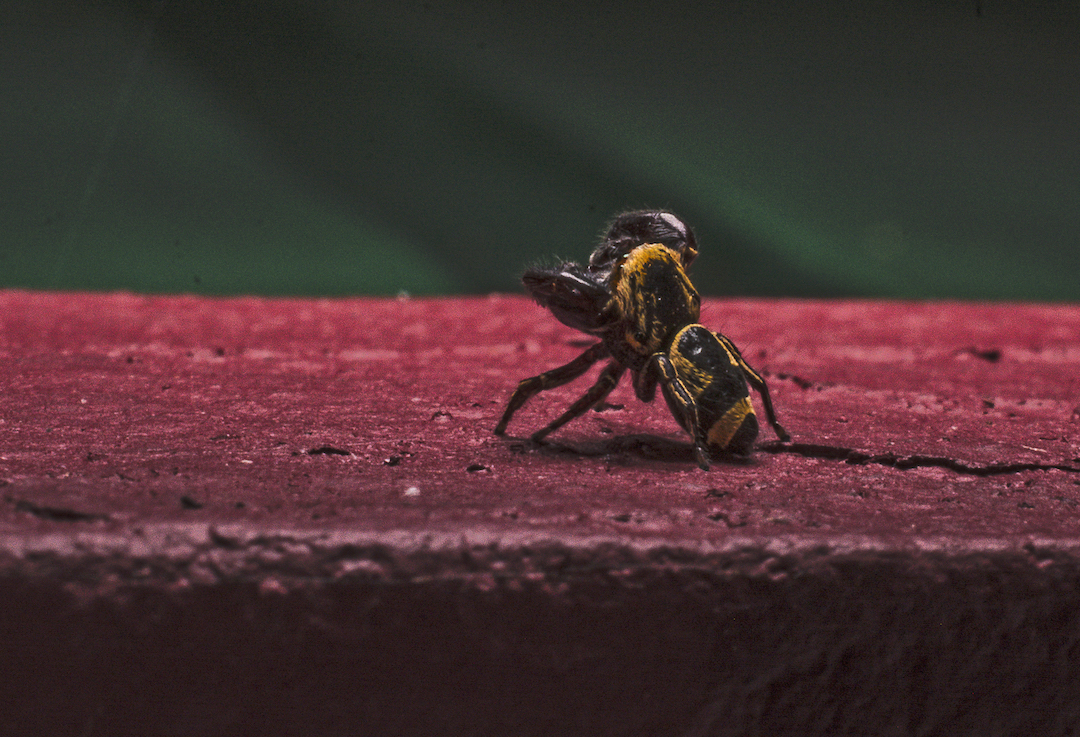 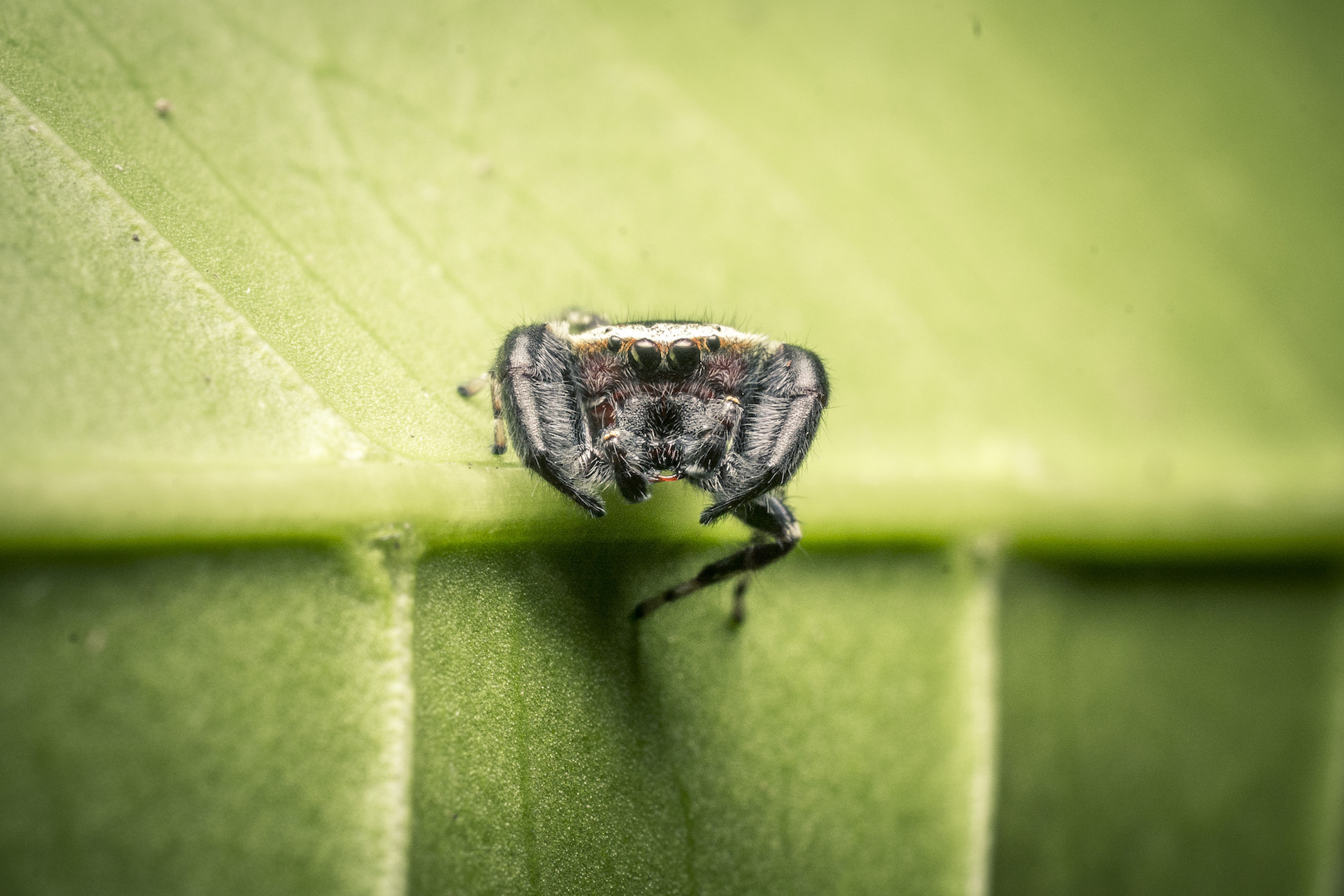 A Rhene sp. gets ready to pounce (left). Some species of jumping spiders are known to leap up to 50 times their body length. It brandishes its red fangs (right) through which it delivers venom into its prey.

If you’ve ever had the pleasure of witnessing a jumping spider up-close, you’d have noticed that they’re polite enough to turn in your direction and make eye contact. This is possible thanks to eight eyes placed all around their cephalothorax (head fused with thorax) that gives the jumping spider near 360-degree vision. If the spider isn’t already looking in your direction, one of the two pairs of eyes placed at the back and sides of its head will spot you, and the spider will turn in your direction. Once it has oriented itself to look in the direction of the moving object, its front eyes take over. The ‘principal’ eyes (the two large eyes in the centre of its head) along with a pair of anterior lateral eyes (smaller ones next to the principal eyes) allow the tiny hunter to detect motion and gauge distance.

Beyond their functional uses, the large eyes of the jumping spider, combined with their size, also make them prime candidates to be one of nature’s most adorable animals. The jumping spider serves as an excellent family of spiders to initiate conversations and counteract the generally prevalent negative popular opinions of spiders. Whether they are adults who are not fond of spiders from a lack of understanding, or children keen on learning about spiders, I’ve found that observing jumping spiders is a great way to introduce people to the wonderful world of spiders.

Having advanced vision means spiders are also able to see more colours than us. When they aren’t using colour perception to gauge the depth of field, they use colours to look attractive to potential mates. While the peacock spider from Australia recently gained fame for its vibrant mating ritual, there are a few spiders in India that can compete for the most spectacularly coloured inhabitants of the forest. Some examples of these include the Rhene flavigera that resemble Bumblebee from the Transformers movie series, and spiders like Chrysilla volupe that might make you wonder if you’re hallucinating.

A jumping spider feeds on a centipede in a bathroom. Jumping spiders occur in diverse habitats, with a majority found in tropical forests

Balancing ecosystems from the Himalayas to our homes.

Contrary to popular belief, the highest recorded permanent resident in the animal kingdom isn’t the Yeti. The Himalayan jumping spider, as the name suggests, lives in the Himalayan mountain ranges and has been found as high as 6,700 m above sea level. Closer to home, the role they play in our gardens is a great example of the larger impact these tiny hunters have on most ecosystems on Earth. Being exclusively predatorial, spiders are the primary controllers of invertebrate populations. The global spider community kill an estimated 400-800 million tonnes of prey each year. So the next time you see a tiny jumper in your garden, remember the role it plays in controlling insect populations that could potentially harm your plants.

Amidst the 48,304 species of spiders recorded around the world, only one spider is a keen vegetarian. Bagheera kiplingi, a jumping spider found in Central America feeds almost exclusively on Beltian bodies (a nutrient-rich detachable structure on leaflets) found on a certain species of acacia.

An ant-mimicking jumping spider devours an unsuspecting fly. Jumping spiders belonging to the genus Myrmarachne use an ingenious mechanism of imitating ants to protect themselves.

Among their long list of adaptations, jumping spiders possess one that will make evolution blush. Spiders in the genus Myrmarachne have evolved to look like ants. The spider disguises itself to look like an ant to gain protective benefits (Batesian mimicry). Most animals that would prey on spiders are typically scared of ants. Ants are known to be extremely aggressive when attacked and have the strength of a colony to back them. Some ants are even considered unpalatable. The Myrmarachne genus of jumping spider uses this to its advantage by not only mimicking the ant, but usually staying within close proximity of the ant colony.

I try to demonstrate this with a slightly relatable example when I have the chance to work with children and youngsters in places where the bicoloured arboreal ant (Tetraponera rufonigra) is found. With a few curious eyes trained on me, I carefully pick up a spider that appears remarkably similar to this ant (the bicoloured arboreal ant is infamous for its excruciatingly painful bites). A quick shake of the hand and people begin to notice that the ant-like critter is now suspending itself on a line of silk. A closer look with a magnifying glass reveals the characteristic big eyes of the jumping spider, pedipalps (appendages characteristic of a spider), and a body made of two segments (spiders have two segments while insects have three). 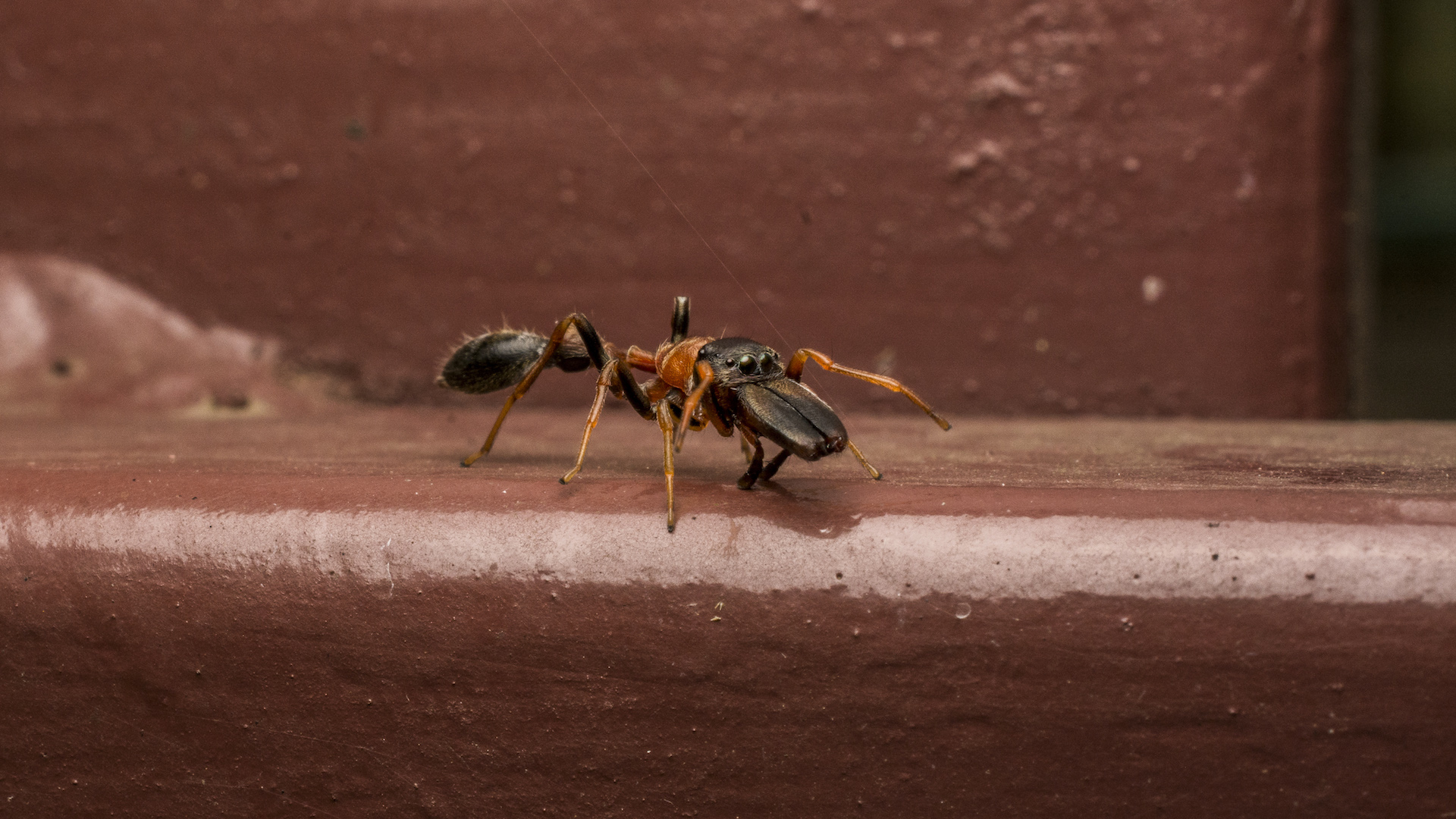 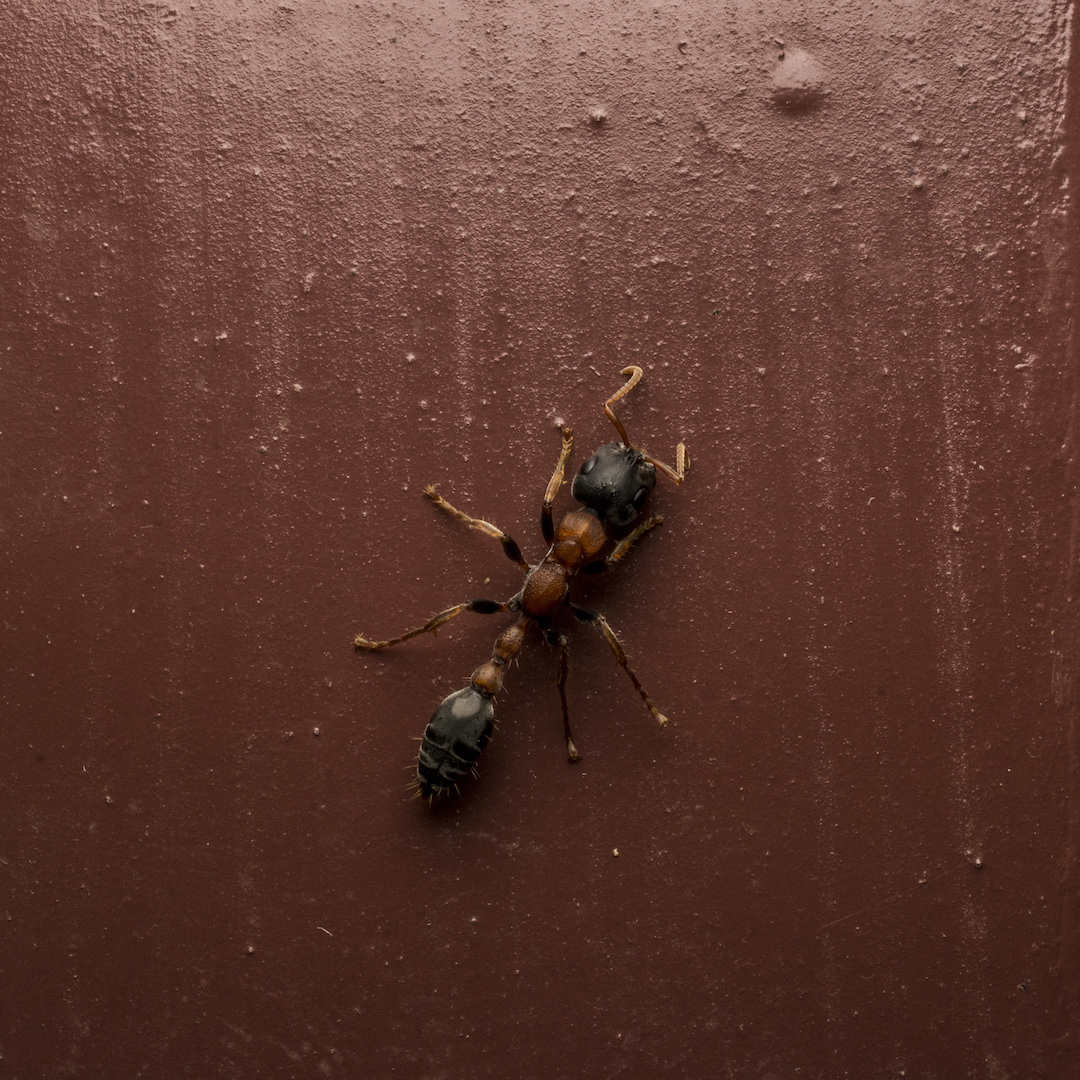 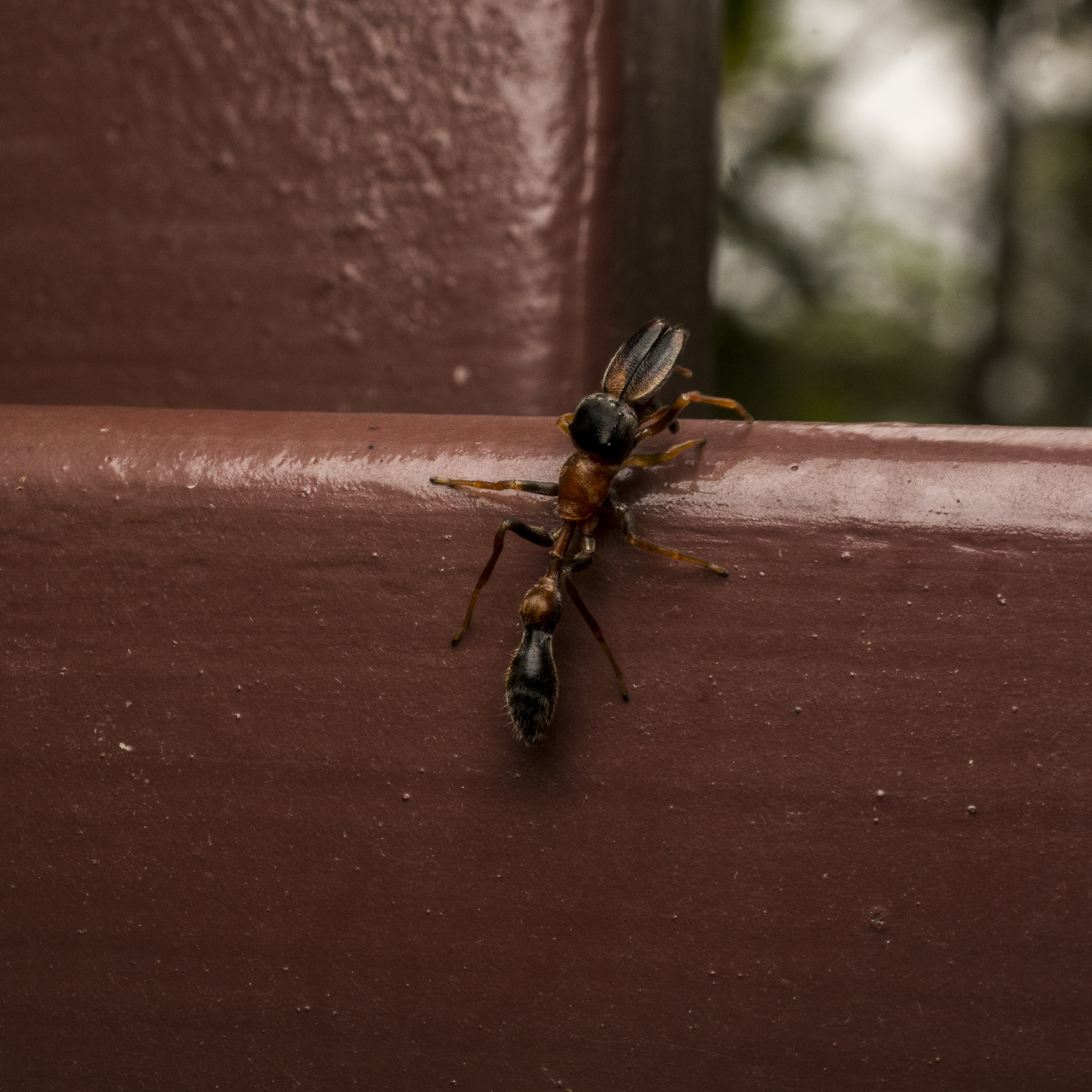 (Above left and right) Can you guess which is the bicoloured arboreal ant Tetraponera rufonigra and which is the spider that resembles it? (Top) A close-up view of the ant-mimic jumper, with its two large principal eyes, should help you identify the spider in the top images.

After a busy day of running, stalking, and jumping, the jumping spider needs a place to rest at night. For this, they build retreats that are safely hidden from plain sight. These retreats are typically found on rolled-up leaves, loose bark, or at points where two individual leaves meet each other. This space also comes in handy when the spider needs a safe space to lay her eggs. 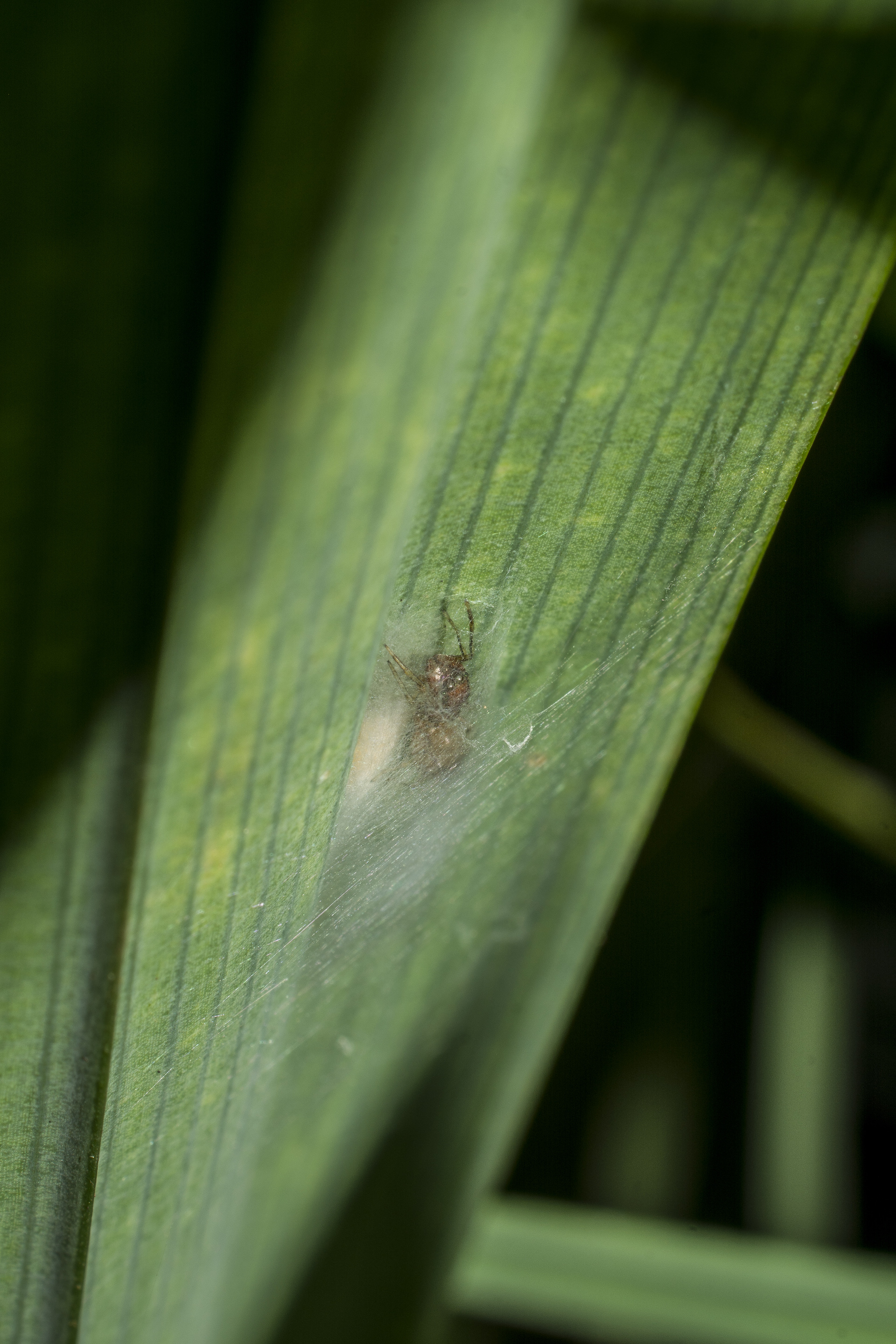 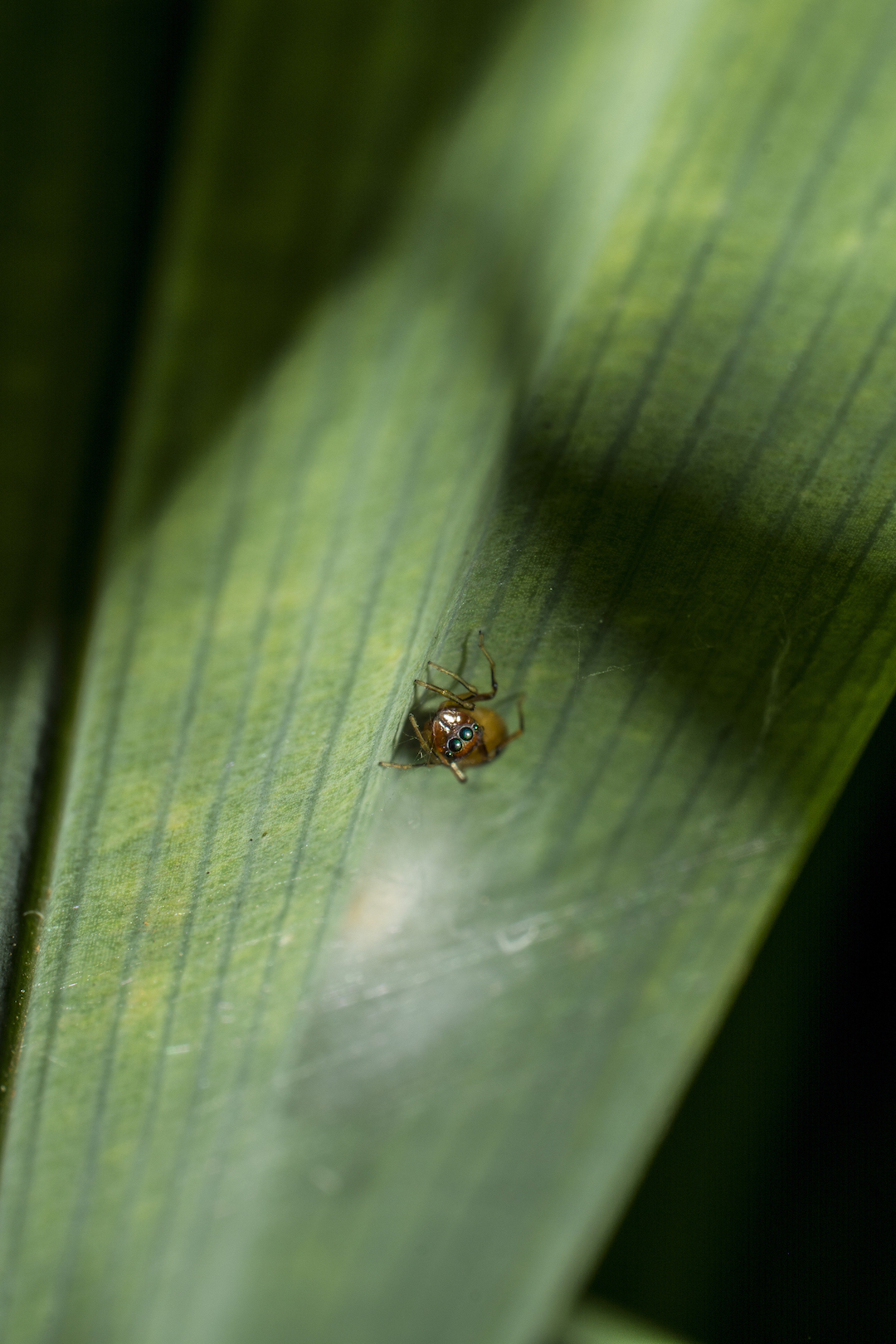 A small female jumping spider of the Myrmarachne genus comes out of a resting station she’s built for the night to inspect the photographer.

Motherhood in spiders is one of the most underappreciated aspects of this animal in popular culture. While the story of motherhood in wolf spiders is extraordinary, jumping spiders do equally well as parents by carefully guarding their clutch of eggs until spiderlings have emerged. This behaviour varies slightly across different species. There is one that has evolved an extremely curious parental trait previously thought to be exclusive to mammals. A study on the species Toxeus magnus has revealed that it nurses its young with a nutritive fluid in a process that is remarkably similar to a lactating mammal feeding newborns. The young are entirely dependent on this milk-like substance that the mother secretes for up to 20 days after they’ve emerged.

A Hindumanes sp spider mother carefully guards her eggs. Like many other species of spiders, jumping spiders protect their eggs from predators and leave the site only after they hatch.

The diversity of the spider community is a testament to evolution’s imagination. From mimicking ants to nursing their young with milk, jumping spiders are a great representation of that diversity. Even with all our understanding of these adorably mysterious hunters, there is still more to be found about their lives.

There is a dire need especially in a country as biodiverse as India for us to understand our spider communities and the larger impact they have on our world. In my own experience, the best places to start are at home and in schools where curiosity hasn’t yet been driven to fear on a road paved with misunderstanding and negative media.

So the next time you’re out on a nature walk or simply strolling through the garden, remember to look out for the little guys because they’ve always kept a keen eye or eight on you.