Don’t be fooled by the name or the sharp canines, the endangered lion-tailed macaque is a shy, fruit-eating primate that inhabits the upper canopy of the rainforests of the Western Ghats

It was nearing 10 am, but the small Kerala hill station of Nelliyampathy still felt sleepy. We’d been trundling about for an hour when my guide Joseph John Erinjery, then a gangly graduate student at the University of Mysore, brought his jeep to a halt. Two plantation workers, in the knee-length loincloths and half-sleeved shirts that are practically a uniform here, were walking down the curving forest road with neatly folded umbrellas under their arms. Had they seen the monkeys that morning, Erinjery asked. One of the men responded in Malayalam, gesticulating further up the hill. 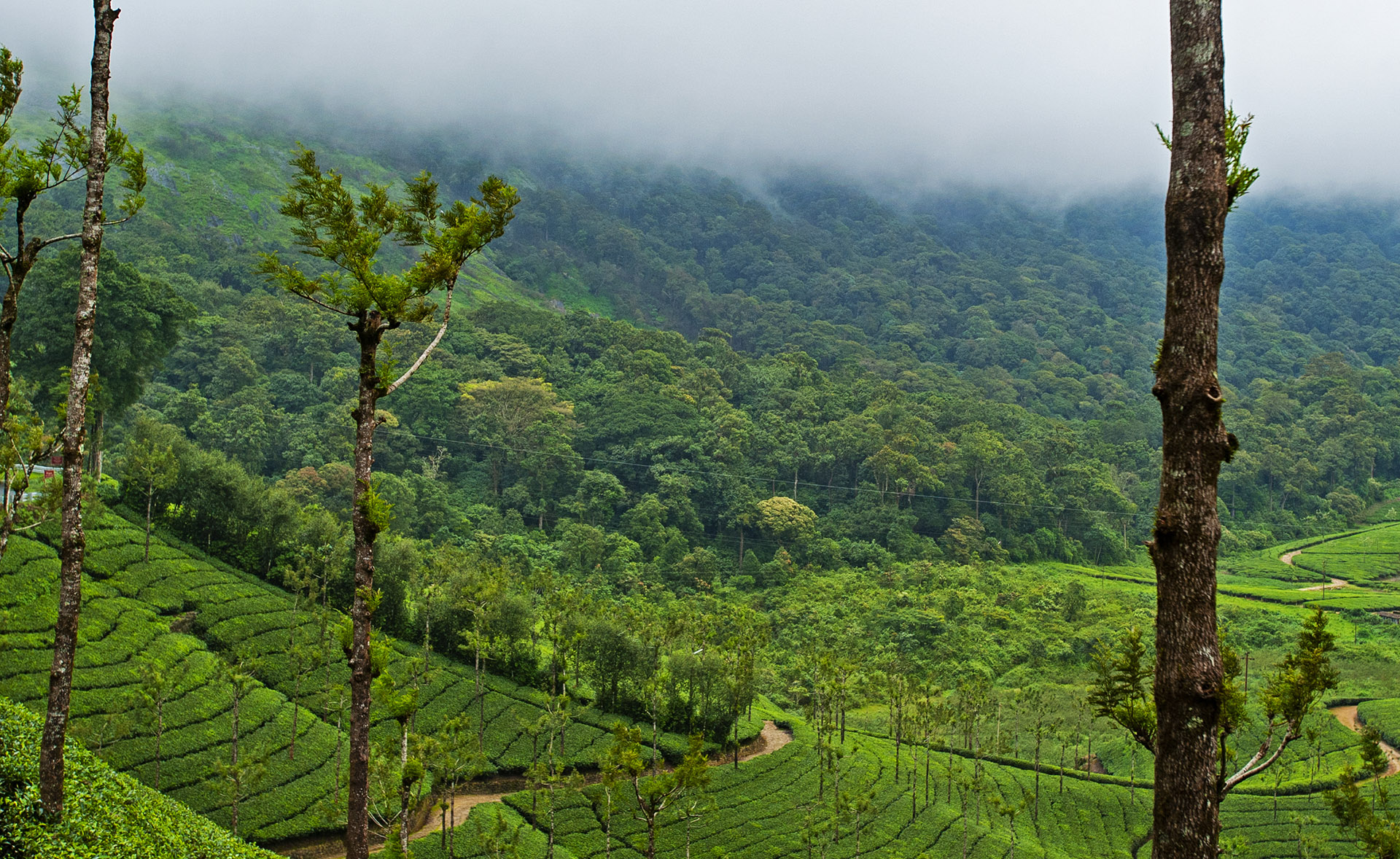 Ranging from 467 m to 1,572 m, the Nelliyampathy Hills in Kerala's Palakkad district is also known as the poor man's Ooty due to its underexplored status. Photo: Dhritiman Mukherjee

It was April 2014, and I was in the Western Ghats to meet an endangered primate. We drove on, the way the man had pointed, our gazes fixed on the tangled canopy. There! A group of monkeys with black faces, black bodies, and light facial hair. But Erinjery chuckled. This wasn’t the monkey we wanted. The Nilgiri langur we’d met has glossy black fur and a striking mane, similar enough to be confused with the monkey we were looking for. But what distinguishes our chosen primate is its shorter, tufted tail.

The Nilgiri langur's long tail is what distinguishes it from its more-celebrated, similarly-coloured cousin – the lion-tailed macaque. Photo: Dhritiman Mukherjee

Among the smallest of the macaques, lion-tailed macaques reach an average height of 40-61 cm. Photo: Arindam Bhattacharya

Fewer than 4,000 lion-tailed macaques — locally known as simhavaala or singavaal kurangu, literally ‘lion-tailed monkey’ — exist in the wild. They are, Erinjery informs me, divided into approximately 47 subpopulations across at least seven locations in the Western Ghats. These wet evergreen forests are also home to an impressive array of endemic plant and animal life, including over a dozen mammals found nowhere else in the world. The lion-tailed macaque, fondly abbreviated to LTM, is one of those: so perfectly adapted to these forests that conservationists are convinced it can function as an umbrella species. Protect it and you protect the whole forest ecosystem.

And it needs protection. The Ghats run about 1,600 km from north to south, but according to the research of wildlife biologist Dr. Ajith Kumar, forests now cover only about 25 percent of the slopes. The British began felling as early as the late 19th century to create cardamom, coffee and tea plantations. Agriculture, dams and human settlement have only speeded up the depletion. Since about 2004, though, Nelliyampathy’s macaques have benefited from an unusual land use shift: at least three plantations have been reclaimed by the state forest department and begun a slow return to wilderness. By Erinjery’s estimate, Nelliyampathy in 2014 had some 200 lion-tailed macaques living in 14 groups, making it one of the best places to see LTMs in a somewhat natural environment. But LTMs in the wild are shy. As soon as they spied us, they would move deeper into the jungle.

Usually found climbing and leaping through trees some 60 to 100 feet tall, the LTM leads its arboreal life with a lithe grace that belies the astounding height of its acrobatics. Its style is poise, not display. It barely ever descends to the ground even for water, managing on fruit sap and dew.

An incredible acrobat, the lion-tailed macaque usually spends most of its time in the upper reaches of the canopy. Photo: Anuroop Krishnan

Unlike the Nilgiri langur, whose whooping ‘hoo hoo hoo’ calls are among the most frequent sounds of the jungle, it rarely makes much noise, devoting most of its energy to the search for food. The only thing you might hear as it travels through the upper canopy is a gentle ‘coo’, helping keep the group together.

When Erinjery and I finally found the LTMs, a silent feast was in progress. A group of about 40 was scattered across a clump of jackfruit trees on either side of the road. A large oblong fruit, fibrous yellow inside and ribbed green outside, the jackfruit originated in these forests. So it makes sense that it is one of the favourite foods of the LTMs, the oldest of the Western Ghat macaques. But the jackfruit is the largest tree-borne fruit in the world, weighing up to 36 kilos, while LTMs are among the world’s smaller macaques, reaching a head-body length of only 16 to 24 inches and an adult weight between 2 and 10 kilos. It’s quite a sight to watch: an LTM balancing itself between two branches, using its forelimbs like arms to immobilize a jackfruit larger than itself, then tearing into it with sharp front teeth. I even saw a sub-adult carry one away to eat in peace, climbing with its back limbs while holding the fruit with the front two and its teeth.

Jackfruit is one of the lion-tailed macaque’s favourite foods. These monkeys may also supplement their frugivorous diet with insects and small vertebrates. Photo: Karthikeyan Shanmugasundaram

Like other primates, LTMs have forward-facing eyes and excellent vision, as well as opposable thumbs dexterous enough to manipulate fruits. Other than jackfruit, they eat figs, spiny green wild durian, elephant apples, and mangoes, supplementing this frugivorous diet with insects: caterpillars, spiders, cicadas and mantises picked off leaves. A juvenile LTM is likely to spend more time foraging for invertebrates than a grown one. Like human children, they need more protein.

Also like human babies, LTMs take time to grow up. The more common bonnet macaque, often found in close proximity to the LTM, has a similar lifespan, of about 20 years. But while a bonnet macaque starts reproducing at age 3 and gives birth every year thereafter, an LTM female is, on average, 6.6 years old when she first gives birth — the oldest among all macaques. And she will have only two or three infants in her lifetime. 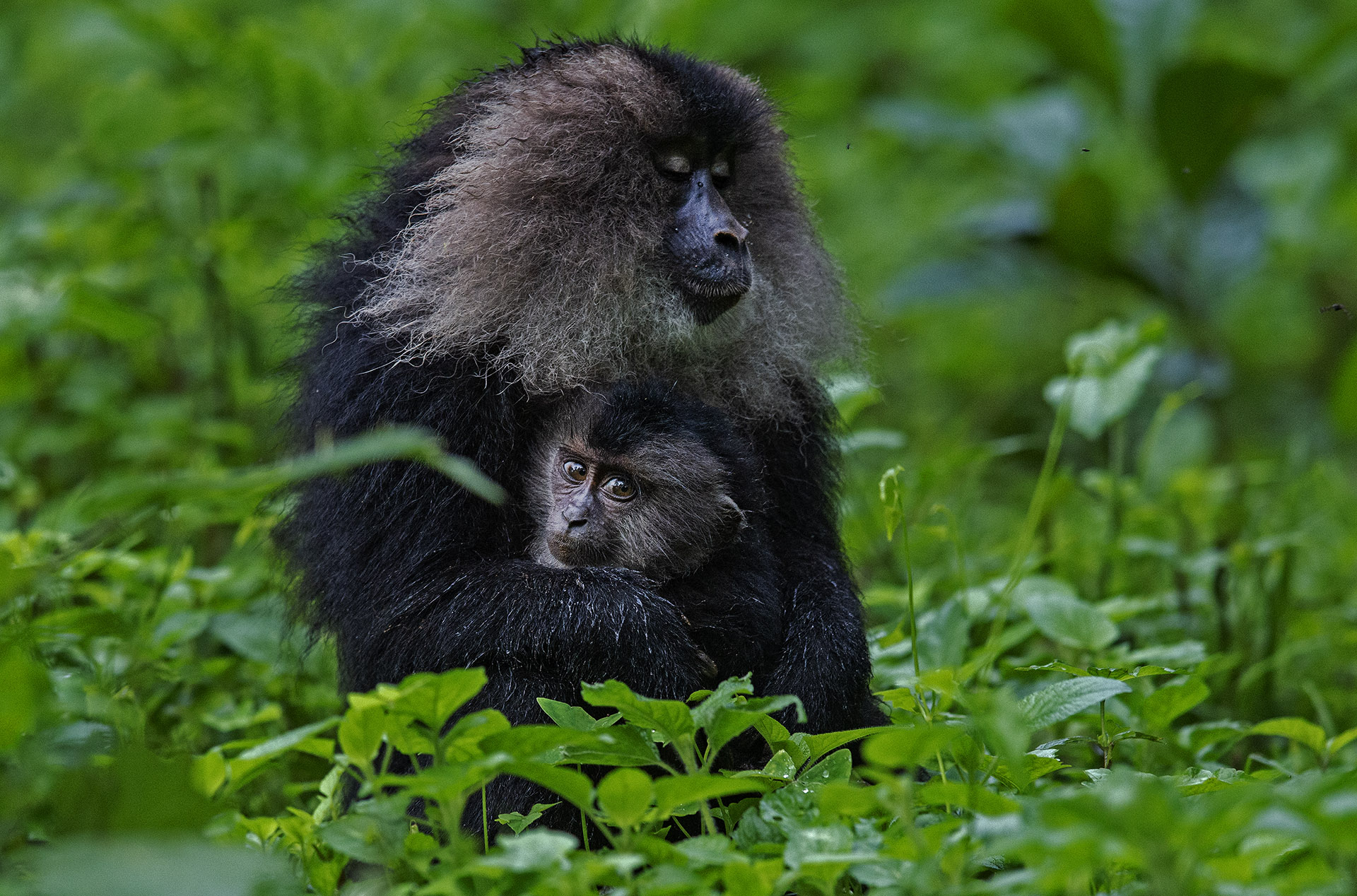 A female lion-tailed macaque carries her young wherever she goes. Females of this species will only bear two to three offspring in their entire lifetime. Photo: Dhritman Mukherjee

LTMs usually live in groups of about 20, with a single dominant male. Where do the other males go? The answer is a fascinating one. While adult females remain in the group they were born into, an adult male LTM must migrate when it turns five or six, and enter another group to mate. An anti-incest rule!

Nelliyampathy’s 736 sq. km. of fragmented forest has begun to redevelop the connectivity needed for LTM males to migrate. But a full third of the world’s LTMs now live in privately-owned forest patches crisscrossed by plantations and human settlements. For every LTM in Nelliyampathy, there is at least one living in Valparai, 130 km away. There, I watched in disbelief as two male LTMs ambled across a busy road to investigate a heap of trashed plastic plates for leftover rice and dal. Returning to our jeep, I found another macaque peering out of it cartoonishly, as if to say, “What guys? No food?”

But the state of LTMs in Valparai was no joke.

Like Nelliyampathy, Valparai began as a colonial plantation area. Today, though surrounded by the protected forests of Anamalai Tiger Reserve, Valparai is a much larger urban settlement. Also, unlike the shady half-jungles of coffee and cardamom that play host to LTMs in Nelliyampathy, Valparai is dominated by tea estates, whose greater tree-clearance amplifies the habitat fragmentation that is the biggest long-term threat to these macaques.

Located near Pollachi in Tamil Nadu, Valparai is a hill station with vast swathes of tea and coffee plantations and home to around 160 lion-tailed macaques. Photo: Keerthana Balaji

Two of the largest Valparai groups, comprising 160-odd LTMs, are living a strange new life: isolated from other groups, hemmed in by human habitation, spending 30-40 percent of their time on the ground instead of the four percent normal for the species, and consuming new foods.

This exclusive tree-dweller has now been forced down to ground level as roads and human habitation cut right through its natural habitat. Photo: Ramki Sreenivasan

In Valparai, it is tragically common to see LTMs by the roadside, making an easy breakfast off local cultivars like the guava. When a car stops, a daring male can get a still easier snack. I saw three different monkeys show up for their fix of fried, salty processed food.

Ananda Kumar, a scientist at the Nature Conservation Foundation (NCF) in Valparai, suspects that growing construction and tourist traffic has increased human-animal interaction, changing LTM behaviour and causing conflict and roadkill. To help, Kumar and his team had built fire-proof canvas bridges to link the tree canopies on opposite sides of the busiest roads, and hired two staffers to track these two groups daily. Between 10 a.m. and 5 p.m., they held up placards telling drivers to ‘Go Slow’ and tried to persuade day trippers — many from a rising tribe of amateur photographers — not to feed the monkeys.

These are emergency measures. Long-term conservation needs plantation owners to work with the NCF. Restoring forest fragments and planting connecting tree corridors across a nude expanse of tea bushes would help create a self-sustaining habitat, in which migrating males from one LTM group can find a mate in another.

The growing number of LTMs in Valparai can appear a good thing, especially since hunting remains a threat elsewhere. But the larger group has 120 individuals, more than six times the size of an average group in the wild. Both groups have become multi-male, and Mysore-based primatologist Mewa Singh says the biological effects of the inbreeding “will only show themselves in several generations.” And given radically altered diets and exposure to human diseases, a ballooning population could suddenly crash.

What I’d learned about the lion-tailed macaque in the wild was that they were almost entirely arboreal, uni-male societies, dependent on the fruits of the rainforest and its connected canopies. In Valparai, all of this had changed. But unlike bonnet macaques and rhesus macaques, known to commonly snatch food and act aggressively with humans, the LTM’s forced engagement with the human world has not yet changed their essential temperament. As one of the placard-holding NCF trackers said, “Sometimes they come and touch us gently on the shoulder. They’re soft-type animals. If you don’t disturb them, they don’t disturb you.”

I can only wonder how much further we intend to push them.