Locust Swarms: Pests or Actors in the Ecosystem?

The locust is both agriculture pest and a food source. Normally solitary, they turn into a locust plague when conditions are just right 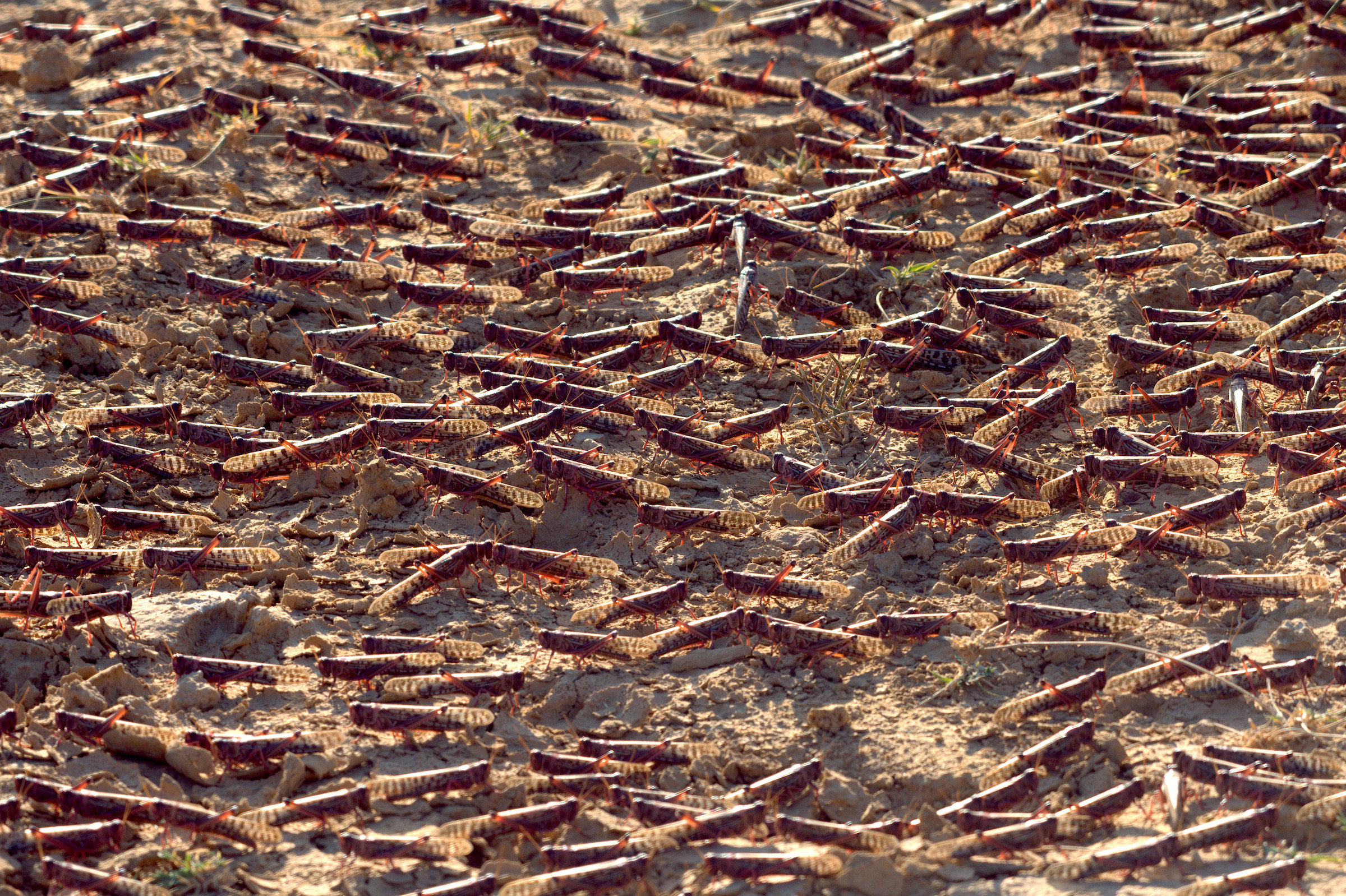 Locusts are short-horned grasshoppers of many genera, occurring on almost all the continents except Antarctica. Out of the 7,000 known varieties of grasshoppers, only 20 species become gregarious and form swarms. Their bodies change colour and grow bigger muscles as they gather to fly and migrate in swarms, leading to what is called a locust plague.

The most famous or infamous is the migratory locust (Locusta migratoria) found in Africa, Asia, and Australia. In Australia, an appropriately named species, the Australian plague locust (Chortoicetes terminifera) swarms in billions. The desert locust (Schistocerca gregaria) of North Africa, the Middle East, and Indian subcontinent is another species that swarms and migrates long distances. In popular articles, all gregarious grasshoppers are called locusts. Setting aside the complicated classification of this group and the various misnomers prevalent, this article deals with the common name “locust” and refers to the species that occurs in India.

Locusts have two forms — solitary and gregarious. For a long time, and for many generations, locusts live solitary lives in the arid and semi-arid areas of Asia, the Middle East, and Africa. They are unremarkable agriculture pests, and a food source for a large number of birds, mammals, reptiles, and amphibians. They feed on plants, converting plant material into protein (their bodies), enjoyed by many species. Their eggs, laid in burrows in the ground, are dug up by other insects and the nymphs (young ones) are caught by small birds and lizards. All in all, locusts have a great ecological role in the food chain. All fine, as long as they live in small numbers. But every few years, when environmental conditions are suitable, they change physically and behaviourally.

What brings this change from solitary life to gregarious life? A combination of environmental factors. Locusts generally live in arid areas where the soil is either hard or too soft (sand), and the rainfall low and scattered — conditions generally unsuitable to lay eggs in the soil. In good rainfall years, like 2018-2019 in many parts of North Africa and the Middle East, the soil becomes soft and the desert saturated, and the locusts are able to lay a large number of eggs in the soil softened by precipitation. At the same time, desert vegetation blooms. When nymphs come out, they have plenty of green vegetation to eat and grow fast. They breed in boundless frenzy, and in a few weeks, a hundred locusts per square kilometre become hundreds of thousands, and then millions per square kilometre.

In swarms, locusts are considered dangerous migratory pests. Desert locusts will feed on many forms of green vegetation they come across. Photo: Asad Rahmani

As the swarms increase, they start moving in search of food and green pastures to eat. They also mate and lay more eggs. Eggs hatch in the hundreds of millions, the hungry nymphs first finish the food around them (if it has not been finished by the adults), and then start moving like a wave of black lava. Nothing can stop them. Nothing can prevent them from eating whatever edible vegetation (generally crop fields) they encounter. Soon the population increases to billions of hungry locusts flying or moving in search of food. Sometimes they migrate hundreds of kilometres, each generation moving further away. This is what we call a locust plague. This is what we saw in 2020 in the Thar Desert and other parts of India. The problem is also exacerbated by the fact of livestock overgrazing pastures, leaving nothing to the hungry insects, which then turn to crop fields.

With the locust bonanza, hundreds of raptors, insectivorous birds, lizards, and small mammals congregate, but soon the food is so abundant and widespread, that locust predators also move away. During my visit to the Thar Desert in September and December 2019, I saw millions of locusts, but surprisingly very few raptors. Was it because of the general decrease in the number of raptors (happening all over the world) or was it that the locusts were so abundant that the raptors did not have to concentrate in any particular area? The answer probably lies in the strategy that locusts deploy. In their gregarious form, they become colourful and distasteful. In zoological terms this is called an aposematic strategy, wherein the animal warns its potential predator that it is dangerous or noxious, so they do not come near it or try to eat it.

Desert locusts threaten agricultural output and livelihoods in many countries in Africa, Asia, and the Middle East. Photo: Asad Rahmani

To address the 2020 locust plague, affected countries, particularly in North Africa, the Middle East, Iran, Pakistan and India have their own locust control departments. The Food and Agriculture Organization (FAO) advises countries on controlling locust populations, and gives early warnings before locust swarms develop. The earlier control measures — aerial spraying of pesticides — is now generally avoided as it has many harmful effects on non-target species, and local control under strict supervision is encouraged.

In mid-2020 locust swarms were spreading across Ethiopia, Somalia, Sudan, Uganda, and Kenya, even as they continued to register their presence in Saudi Arabia, Oman, Yemen, Iran, Pakistan, and India. As most of the effected countries are poor, ill-organised, or in conflict zones, the FAO appealed for US$138 million in immediate funding to address the problem.

A swarm of desert locusts fills the sky over the Samburu National Reserve in Kenya. In 2020 countries in east Africa such as Kenya, Ethiopia, and Somalia battle one of the worst locust invasions known. Photo: Jen Watson/Shutterstock

Historically, locust plagues have resulted in famine and human misery. Such incidents have been mentioned from records of ancient Egypt and in many old religious texts including the Bible. As locust swarms eat agricultural crops, in many countries the locust itself is eaten by human beings, notwithstanding some species’ having mild toxicity. Many African tribes cook and consume them as they are full of protein. I think it is the most sensible thing to do when hunger is looming in front of you. In Semitic religions, eating locusts in certain circumstances is allowed. In Judaism, for example, locusts are the only insects considered kosher. While most insects were considered unclean in Christianity, the Mosaic law, Leviticus 11:22 specifically states that eating locusts is permitted. Even in Islam, where the difference between halal and non-halal food is very important, locusts can be eaten when there is nothing else to eat.

is an ornithologist and conservationist, former Director of BNHS, and currently the scientific adviser to The Corbett Foundation, and governing council member of Wetlands International, South Asia