Thousands of kilometres from its natural habitat, a lone, unexpected guest becomes a temporary celebrity for the birdwatching community of Thane Creek Flamingo Sanctuary

It was January 2017, and I was on a boat cruising the mangroves of one of my favourite places, the Thane Creek Flamingo Sanctuary near Mumbai. The flamingos, as always, did not disappoint. A pink tide on the mudflats bathed in the morning’s golden light. As they flew overhead, the collective “oohs and aahs” from all those aboard was testament to the satisfaction everyone felt early that Saturday morning.

Slowly, we made our way back to the jetty. There is a stretch on the return where the mudflats and some smaller avian species can be seen and appreciated at close quarters. I spied a common greenshank, migratory ducks, including northern shovellers, and was discussing their characteristics with my friends, when loud murmurs suddenly broke out among the birdwatchers behind us.

Ronit Dutta, an inveterate birder, excitedly said that there was perhaps a rarity in our midst. He showed me an image on the LCD monitor camera of another birder, Sivaramakrishnan Sivasubramanian. At first glance the bird was fairly unremarkable — a dull, drab brown, with long bill and pale-yellow legs. But Ronit excitedly exclaimed it looked like a dowitcher, an oddity in our neck of the woods. Adrenaline began to course through my veins as well, for this was a wader I had never seen. Waders are birds generally inhabiting coastal habitats such as beaches, mangroves, and mudflats, and are sometimes called shorebirds. 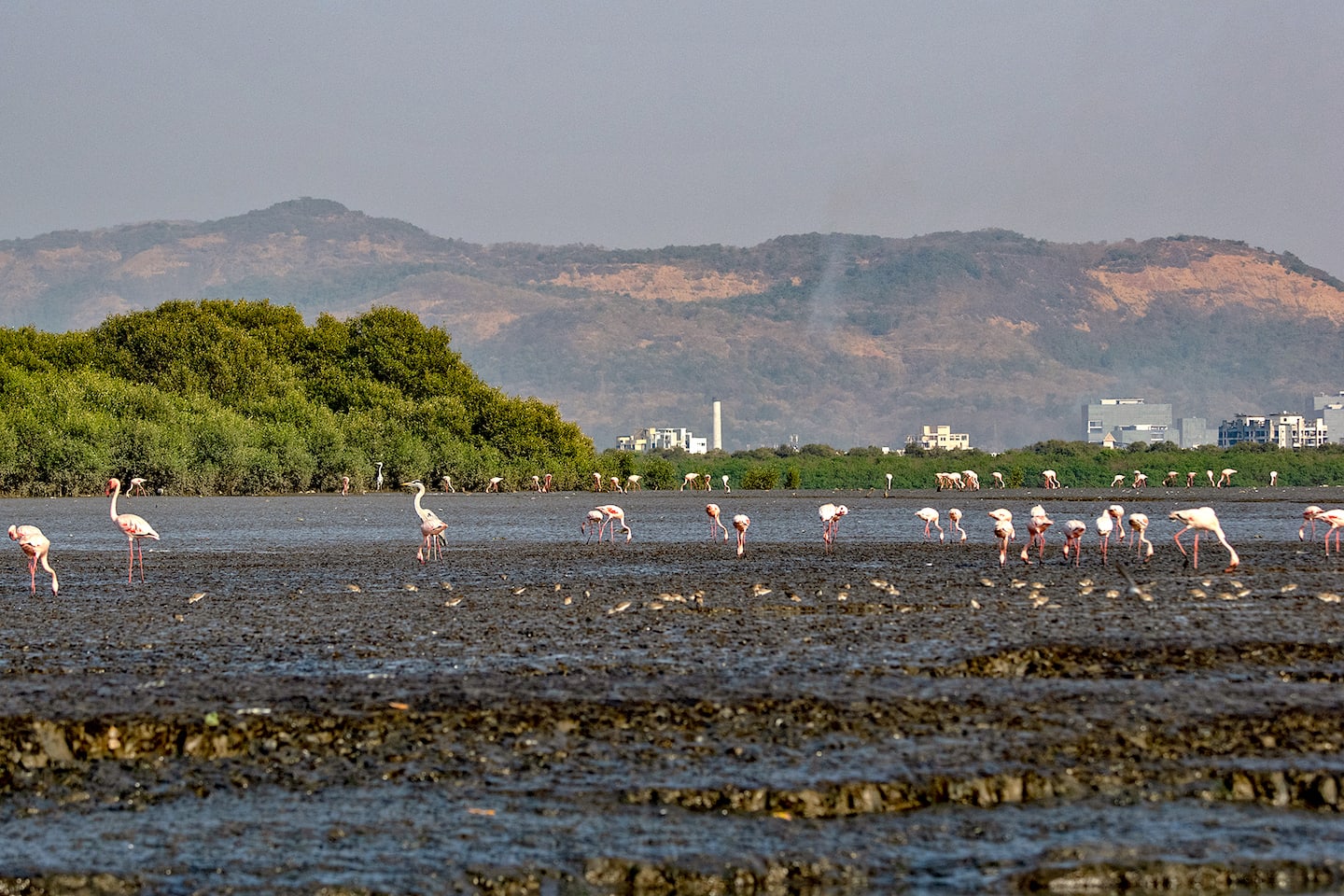 Mumbai’s birding community made a beeline for Thane Creek in 2017 when a vagrant long-billed dowitcher was sighted at this haven for migratory birds. It was the first recorded sighting of the bird in Maharashtra. Photo: Shashank Birla
Cover: Long-billed dowitchers are migratory birds which breed in North America and eastern Siberia and aren’t known to travel to India under normal circumstances. Cover photo: Shashank Birla

We requested the boatman to turn around and he obliged. We scanned the spot where Siva had photographed the bird with determination. Despite so many eyes searching for it, no one spotted the strange-looking bird. Disappointed, we returned to the jetty where another photographer, Satyajeet Shinde, also shared a photograph of the bird taken around the same time. Hunched in a small circle near the jetty, we discussed possible identification marks. We analysed the two images, checked and rechecked field guides and images online, and it was becoming clear that this was not any common wader. Ronit’s guess that this was a dowitcher seemed to hit the mark. Yet, this bird did not completely fit the identification marks of an Asian dowitcher either, which even though rare, was the main suspect. Aside from subtle differences, the legs of an Asian dowitcher are black, whereas this bird had pale-yellow legs. Finally, I hopped to the section on “vagrants” that I rarely open in my field guide Birds of the Indian Subcontinent. Vagrants are species recorded well outside their breeding and migratory range. They are the accidentals, the surprises, the jack-in-the-boxes — and prized catch for any birder.

I browsed the waders listed as vagrants. Nope, nope, nope — I mentally crossed out each species that did not match our bird, until my eye fell on the long-billed dowitcher. The overall marks seemed to match, and the clincher — yellow legs! However, the bird’s usual range was worlds away in North and Central America, with a few birds seen in Western Europe and Siberia. How had it landed here? Despite these facts, it seemed to be the closest match for the bird photographed and I voiced this to our small group. Could it be the long-billed dowitcher? Our excitement was palpable.

The wader uses its long bill like a sewing machine needle to probe for insects, molluscs, crustaceans, and marine worms in shallow waters or mud. Tactile receptors called Herbst corpuscles on the tip of its bill allow the bird to locate prey by touch. Photo: Shashank Dalvi

As is the norm in these cases, we took a few phone shots from the camera’s screen and sent messages to senior birders and ornithologists. The responses from two birders, Adesh Shivkar and Shashank Dalvi, confirmed that it looked like a long-billed dowitcher. “Congrats”, the messages said. There was joy all around. What a sighting, what a catch! Except, I hadn’t actually seen the bird, only a photograph of it!

Over the next few days a bevy of birders visited the spot. The bird’s identity was further discussed and compared to another similar-looking species, the short-billed dowitcher. Differentiating them was very difficult. However, a few things helped us arrive at a firm conclusion. One, unknown to us at the time of the sighting, a survey by the Bombay Natural History Society had also uncovered this species a few weeks earlier, and they had examined the bird closely. Second, the bird was heard vocalising, perhaps the only discernible way to differentiate short-billed and long-billed dowitchers. The latter has a more high-pitched call. Contrary to their names, bill length is actually quite variable depending on the age of the bird, and usually an unreliable identifier.

As these pictures show, this is not a flamboyant looker like the Indian pitta or peacock. Its appearance is quite unremarkable when you spot it on the mudflats. It is like many of the other waders that patrol the creek looking for small invertebrates like crabs, snails and other molluscs that make up its diet. When you see it feeding, however, it looks a little comical, plunging that long bill deep into the mud. With a motion akin to a sewing machine, its head bobs frenetically in pursuit of its prey. But this sort of behaviour is missed as you pass by this bird on a boat ride, as it looks so similar to the many other sandpiper species.

During the winter when it migrates, the adult bird is muddy brown, with a long, straight dark bill and yellowish legs. When feeding, it may deliberately stand in one spot for a while before moving forward. Photo: Saurabh Sawant

Since the bird was so ordinary looking, what was all the fuss about? The real thrill is not about the bird’s looks. It is about its story. How did a bird with a native range more than 12,000 km away, on another continent, land up here? Interestingly, this is not the first time a long-billed dowitcher has been recorded in India. In 2016, the species was reported by PP Sreenivasan in Thrissur, Kerala. A few years before that, it was recorded at Delhi’s Sultanpur National Park. It’s even been recorded at the world-famous Keoladeo National Park in Rajasthan. Nearly all the spots where it has been recorded are well-known birdwatching areas.

There are some possible inferences we can draw from the sightings. First, that there are only sporadic records of this species in India. Second, most recent records point to single birds being seen, contrary to the way the species is usually seen in small flocks in its native range. Both facets are consistent with this species being classified as “vagrant” in India.

As birdwatching has increased manifold over the 2010s, I expect we may get a few more reports of the long-billed dowitcher from other parts of the country. Even if these reports increase though, I believe this species will remain something of a rarity in India, and for the birdwatching community it will always remain a treasured find.

In spite of making several more trips to Thane Creek that year, my date with the long-billed dowitcher didn’t take place. It was only in the winter of 2018 that I eventually saw it. It was a happy moment and a relief to finally see the bird that had captured my imagination for a year. I wondered whether it was the same individual, as it was again alone. There is some empirical evidence to suggest that migratory birds do show site fidelity i.e. returning to their exact breeding and feeding grounds, however, it is difficult to be certain in this case and we couldn’t say if we were looking at the same individual. 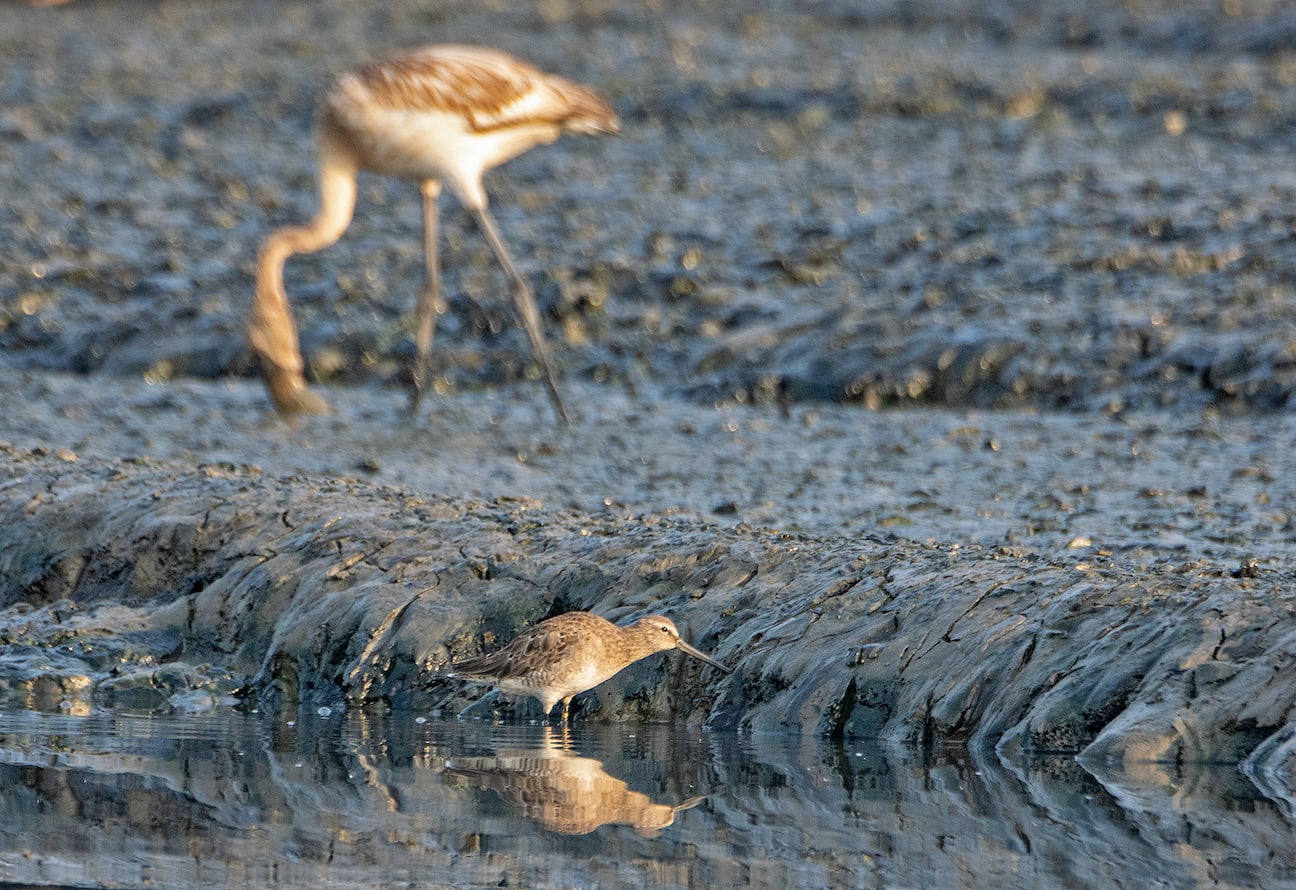 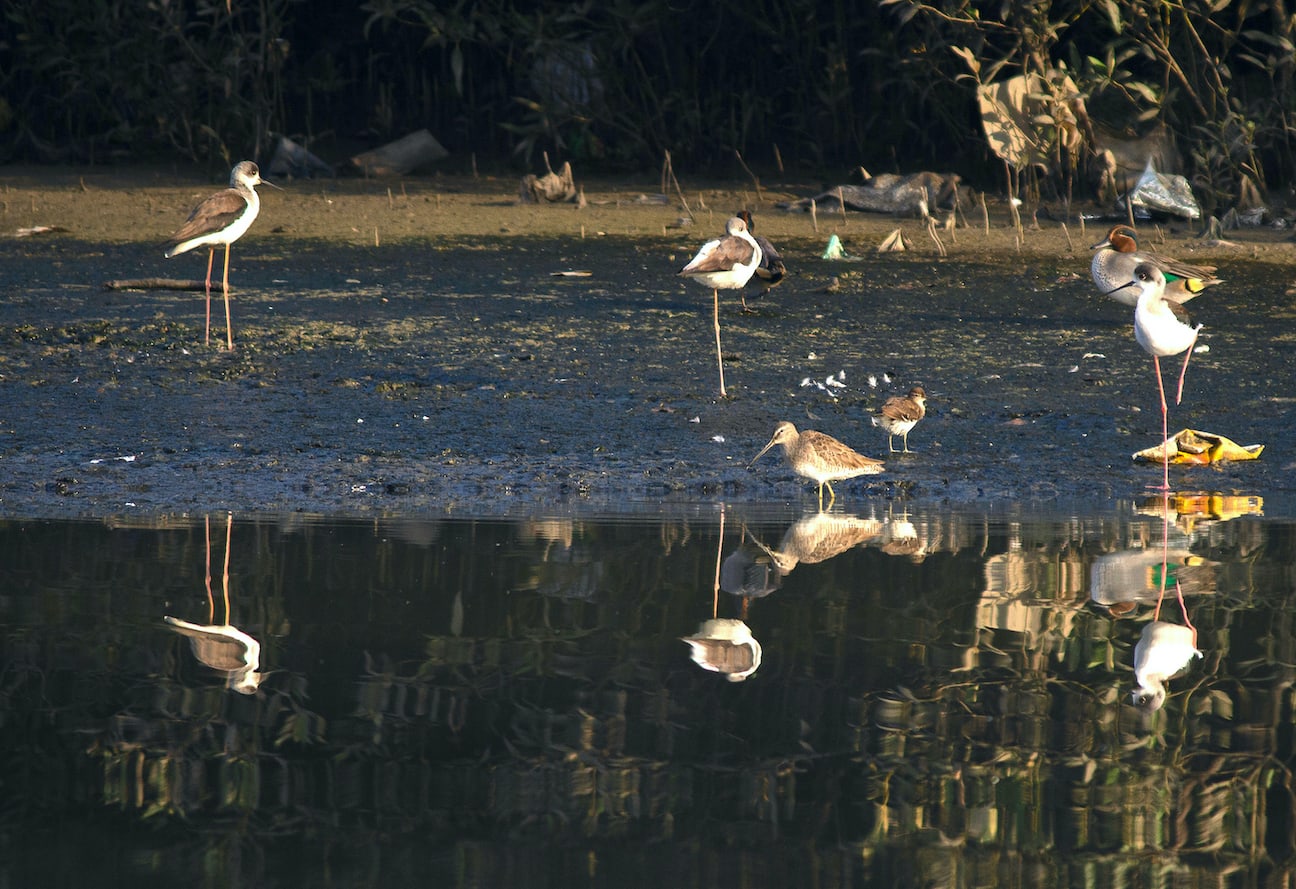 Around 30 cm in length, the long-billed dowitcher can be easily overlooked when there are other taller waders around. Its brown plumage allows it to camouflage itself well in the muddy shores it forages along.
Photos: Shashank Birla (left), Saurabh Sawant (right)

In February 2020, I was once again on a boat ride with friends in Thane Creek. No sooner had I reached the jetty, the now familiar boat owner hastened to inform me that he thought the dowitcher was back. He wanted to make sure he was identifying the bird correctly, as the regular birders he knew had not yet had an opportunity to see it this season. We set adrift on the creek, enjoying its many avian delights. Soon, we were close to the spot known to be the dowitcher’s usual haunt on the mudflats. As we cruised by the spot only the usual waders were present, but I continued to look behind me with hope. Then suddenly, a different shape popped out from behind a mound. I held my nerve, wanting to make absolutely sure before uttering those joyful words: “Dowitcher!” Quick as a whistle, we turned around and much to everyone’s delight, we saw and photographed the bird to our heart’s content. The boat owner was all smiles on hearing the news on our return. News of the star of Thane Creek spread among the birding community, drawing a faithful following over the next few weeks. This unusual bird’s time in the spotlight once again revealed that one never knows what treasures lie undiscovered in our protected wilderness havens.