Religious lore, temples, and the impact of inadvertent conservation in the Cauvery basin

My family holds the temple at Shringeri in Karnataka in high regard and I’ve been visiting the temple town with (somewhat annoying) regularity since I was young. As a kid, I’ve dragged elders to the markets outside the temple complex to buy pori (puffed rice) and bits of rusk as though they were religious offerings. After a circuit through the shrines, when it was agreed that we’d done enough to satisfy a fair percentage of Hindu gods, I would suggest going to down a set of stairs that led right to the Tungabhadra, a tributary of the Krishna River. There, undulating shoals of dark fish, their scales reflecting sunlight, fascinated me, and I’d spend hours watching them. They always seemed to be hungry. Feeding them human snacks was a fantastic ruse to draw them out to the last step. The fish did loop-de-loops while swallowing the little bits of rusk thrown at them and some adventurous kids would try to touch them mid-loop.

On my last visit, I noticed that the fish were positively corpulent. They’d stick around on the shore and never swim back into the depths as they had in previous years. They were less competitive, but still perpetually hungry. The fish remain fascinating to observe, but they’ve raised questions on how their proximity to the temple affects the natural balance of their population and ecosystem.

The mahseer is an important cultural icon in India, and is worshipped in several temples on the banks of the Tungabhadra River in Karnataka. Photo: Philanthropist 1, CC BY-SA 3.0
Cover Photo: The Deccan mahseer or Tor khudree is among the largest of Indian river fish. It can grow up to six feet long and weigh up to 45 kg. Photo: Joshua Barton

The fish in question are “mahseer”, believed to be the same as matsya from the Hindu deity Vishnu’s first avatar (incarnation). The region of the upper Cauvery basin has been called Mastyadesha, likely due to the combination of the legend of origins of the Cauvery, the connection with Vishnu, and the river being full of this fish. At times, mahseer are considered children of the goddess Parvati, who is often shown in temples with the lower body of a mahseer.

The most common population in the Shringeri Fish Sanctuary (the formal name of the Tungabhadra riverbank and the surrounding area of the river) is the Deccan mahseer or Tor khudree, which has a vastly inflated population in the sanctuary compared to other species of mahseer. The sanctuary bans fishing (most likely on religious grounds) though fishermen are granted licenses to fish, using traditional techniques, outside the sanctuary’s limits. Local mahseer populations have been protected and considered sacred for 5,000 years (this is also in several temple areas on the banks of the Krishna and Cauvery rivers).

Mahseer are omnivores and feed on plants, small fish, and invertebrates. Their powerful jaws and fleshy lips are adapted for pulling out prey even from the river bed. Photo: Joshua Barton

History and the study of mahseer
Anglers consider this fish prize catch, especially from the Cauvery. The endemic populations of the hump-backed mahseer or Tor remadevii were legends in the sport but with the introduction of Tor khudree in the 1980s, this endemic species has declined significantly, for a variety of reasons. One suggested reason is that Tor khudree breed multiple times a year and can adapt better to changes while the Tor remadevii breed less frequently. This would imply that the Tor khudree population fills any gap that the Tor remadevii’s loss of population leaves. Another argument questions the introduction of the Tor khudree in the same river systems where they compete with Tor remadevii for the spot of apex predator. Coupled with the loss of prey this explains why Tor remadevii might lose to Tor khudree in their natural habitats. However, until there are relevant studies to back either of these claims, they are merely suggestions based on anecdotal observations.

Angling records have proved to be invaluable in understanding the history of these fish in the wild. They have been extensively studied for artificial breeding; only about 15 per cent of all research and funding is directed toward populations in the wild, according to a study carried out by Adrian Pinder and Andrew Harrison at Bournemouth University. This creates a clear gap in the understanding of these fish in their natural habitats which inhibits efforts to scientifically protect local populations. There are now efforts directed to fill these gaps and improve the scientific understanding of these species.

(Left) Introduction of invasive species such as the tilapia is hampering the habitat of the mahseer. (Right) Adult orange-finned mahseer or humpback mahseer caught from the Moyar River. Photos: Joshua Barton (left), Pinder et al, CC BY 4.0 (right)

My personal observations of mahseer over my lifetime coupled with the limited resources on these fish available online led me to interview Steve Lockett, Executive Director at the Mahseer Trust. The Mahseer Trust is an organization dedicated “to providing genuine and well-researched details about the ecology and populations of mahseer to allow policymakers and local communities to better shape fish management.” The group focuses on river habitat issues to ensure the health of people and fish, and other users of river habitat.

Impact of temples on local fish populations
Lockett says that allowing access to fish populations near temple areas is often a source of income to temple foundations, which often sell feed to those visiting the temple sites. Visitors to these areas feed the fish with unhealthy food, unnatural to their diets, making them dependent on easy food sources and causing them to shoal in large numbers. The size of these shoals makes them susceptible to disease and pollution. This is more dangerous for species like the hump-backed mahseer or T. remadevii, an endemic species facing threat of extinction as per a paper (“The Legendary Hump-backed Mahseer Tor sp. of India’s River Cauvery: An Endemic Fish Swimming Towards Extinction?”) by Pinder et al. published in Endangered Species Research in 2015, also affiliated with the Mahseer Trust. Some temples, like the one in Ramanathapura, have modified the local habitat to maintain populations of mahseer near them. This has most likely led to the loss of populations of other large fish in the area, potentially due to injury from competing with other fish or because these population changes increase the likelihood of disease in these populations, posits a study conducted by Madhav Gadgil commissioned by Karnataka Department of Fisheries.

(Left) Steve Lockett, Executive Director of the Mahseer Trust, holds a Tor khudree caught in Maharashtra. He has been working to conserve mahseer and their habitat for the last decade. (Right) UK angler, Ken Loughran, is known for capturing the largest mahseer — a humpback mahseer — that weighed around 54 kg. Loughran has spent many years fishing in the Cauvery. Here, he releases a Tor khudree back into the river. Photos: Steve Lockett

While local efforts to protect and save fish populations are to be encouraged, temples tend to pose a particularly tricky problem because fish are revered and safe on one hand, and at risk of disease and death, on the other. Such sites can be used to protect fish populations most at risk of extinction if the populations are maintained following scientific methods. There are some challenges with scientific conservation of the mahseer as well; the IUCN and national agencies such as the MoEFCC don’t fully align in their guidelines for breeding and translocation of these fish in restocking efforts.

Since the pandemic in 2020, the temple has closed off river access to visitors, and it would be interesting to see how the populations have adapted to the loss of their easy sources of food. Time, data, and science will tell. 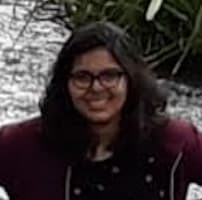 is a 23-year-old electrical engineer and writer from Mumbai, India. She studies and works on electrical power and writes to understand the world better.