The Malabar grey hornbill is endemic to and emblematic of the rainforests of the Western Ghats, which often resonate with their calls and cackles

It was midday, and I was walking through a grove of large trees near a temple in Agumbe. The sudden cacophony in the canopy of a Myristica malabarica tree caught my attention. Until then I had been transfixed by a king cobra being rescued. Looking up, I found the suspects: medium-sized grey birds with a large bill were hopping from branch to branch, chasing each other around like mobsters. I felt like they were following me from the moment I’d entered the Agumbe rainforest paradise a few days earlier. They seemed to be trailing me, for their calls were everywhere, punctuating meals, in rain or sunshine. It seemed like they were having fun, mocking each other and the rest of the denizens of the rainforest. They reminded me of the laughing jackass or the kookaburra, for their calls would trail off into laughter.

The mobsters I’m referring to belong to the midstory and canopy. They were Malabar grey hornbills, birds that are synonymous with the rainforests of the Western Ghats and its surrounding habitats. On my numerous trips up and down the ghats, I have never failed to spot one. The Malabar grey hornbill (Ocyceros griseus) has a large orange-yellow beak, and a predominantly grey body with a whitish eyebrow stripe. This bird is unmistakable, and endemic to the Western Ghats. Unlike the other hornbills, this bird does not have a casque over its beak. But like the others, it is a tree cavity nester, with the female undergoing a period of seclusion to lay-incubate-hatch and raise chicks. During this time the entrance to the nest remains sealed, with a slit large enough for the male hornbill to pass food to the female. In a few weeks, the female exits the nest, reseals the entrance, and along with the male continues to feed the chicks. 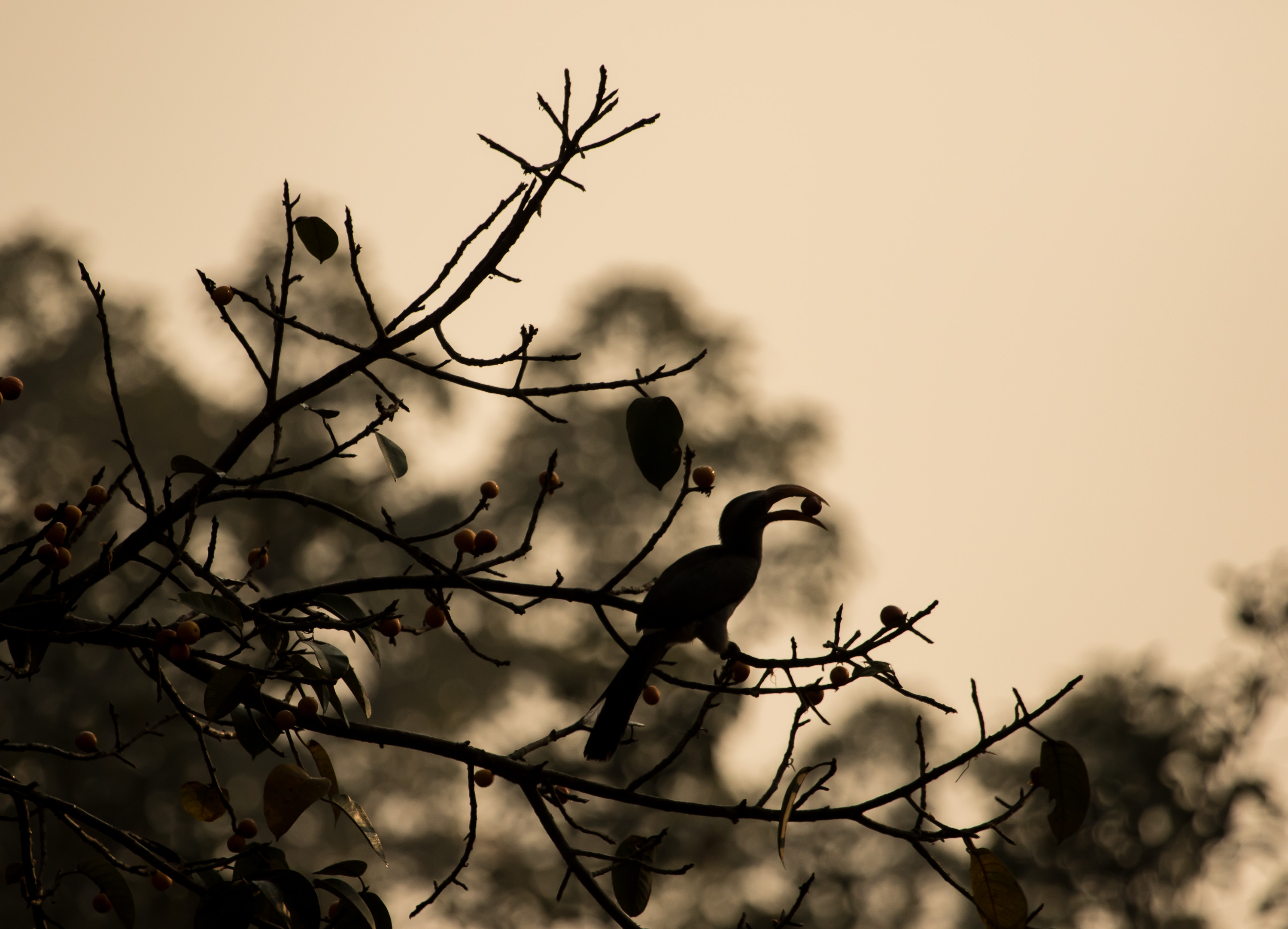 These raucous birds usually hang around a fruiting tree in the rainforest. They mainly eat berries and figs, but also insects, lizards, and other small creatures. Photo: Uday Kiran28 - CC BY-SA 4.0 Male and female Malabar grey hornbills have similar plumage but the male has an orange beak with a yellow tip, and the female has a yellow bill with a black base. Photo: Dhritiman Mukherjee

The forest floor under the Myristica tree was littered with fruits and seeds, and only then did it occur to me that this gang of four Malabar grey hornbills could have been involved in a daring daytime heist, also known as seed dispersal. These mobsters are also gardeners of the rainforest. They help disperse seeds of dozens of rainforest trees far and wide. Sometimes the seeds fall under the parent tree, but often they are carried quite a distance away, increasing the chances of survival. 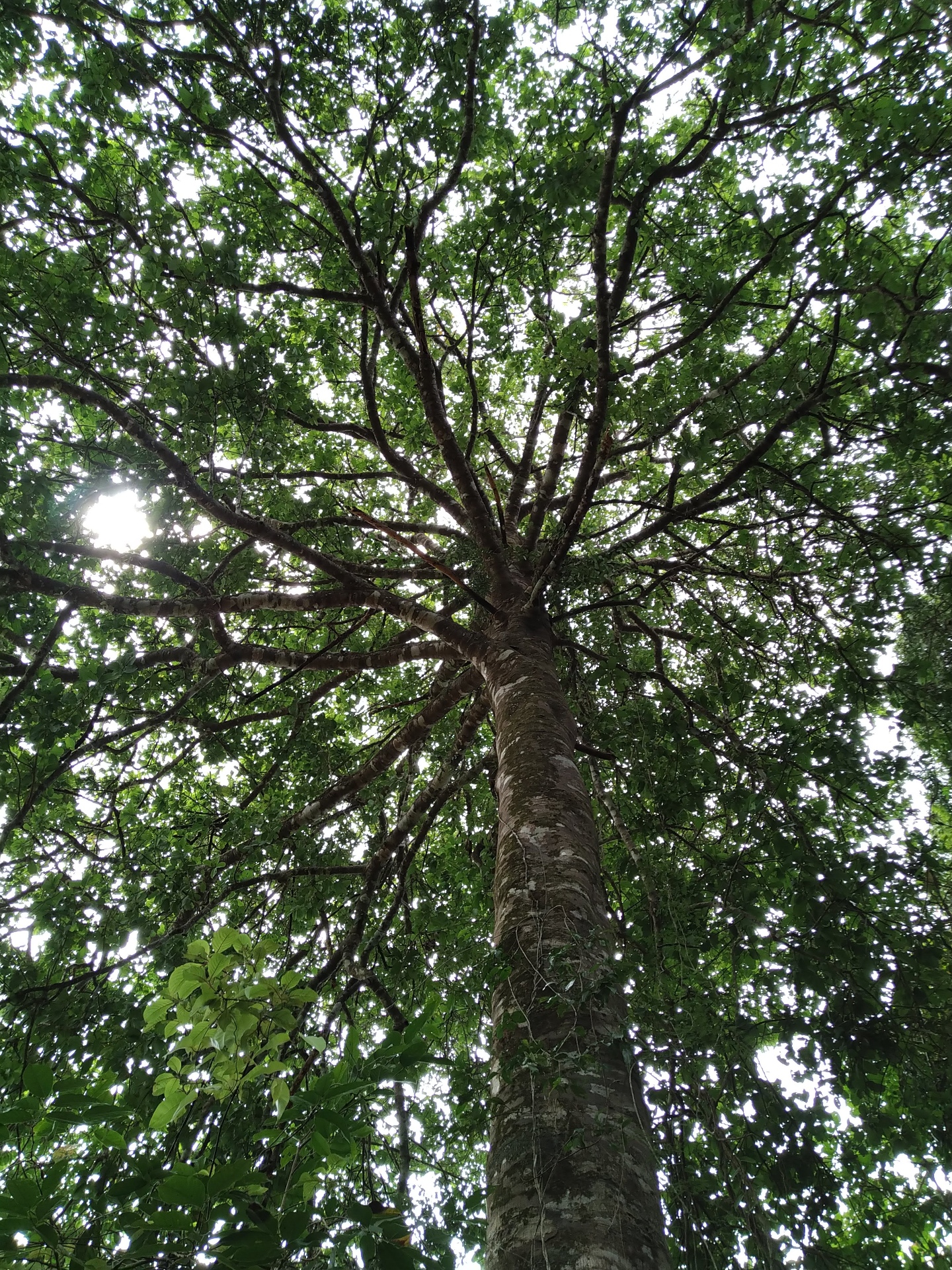 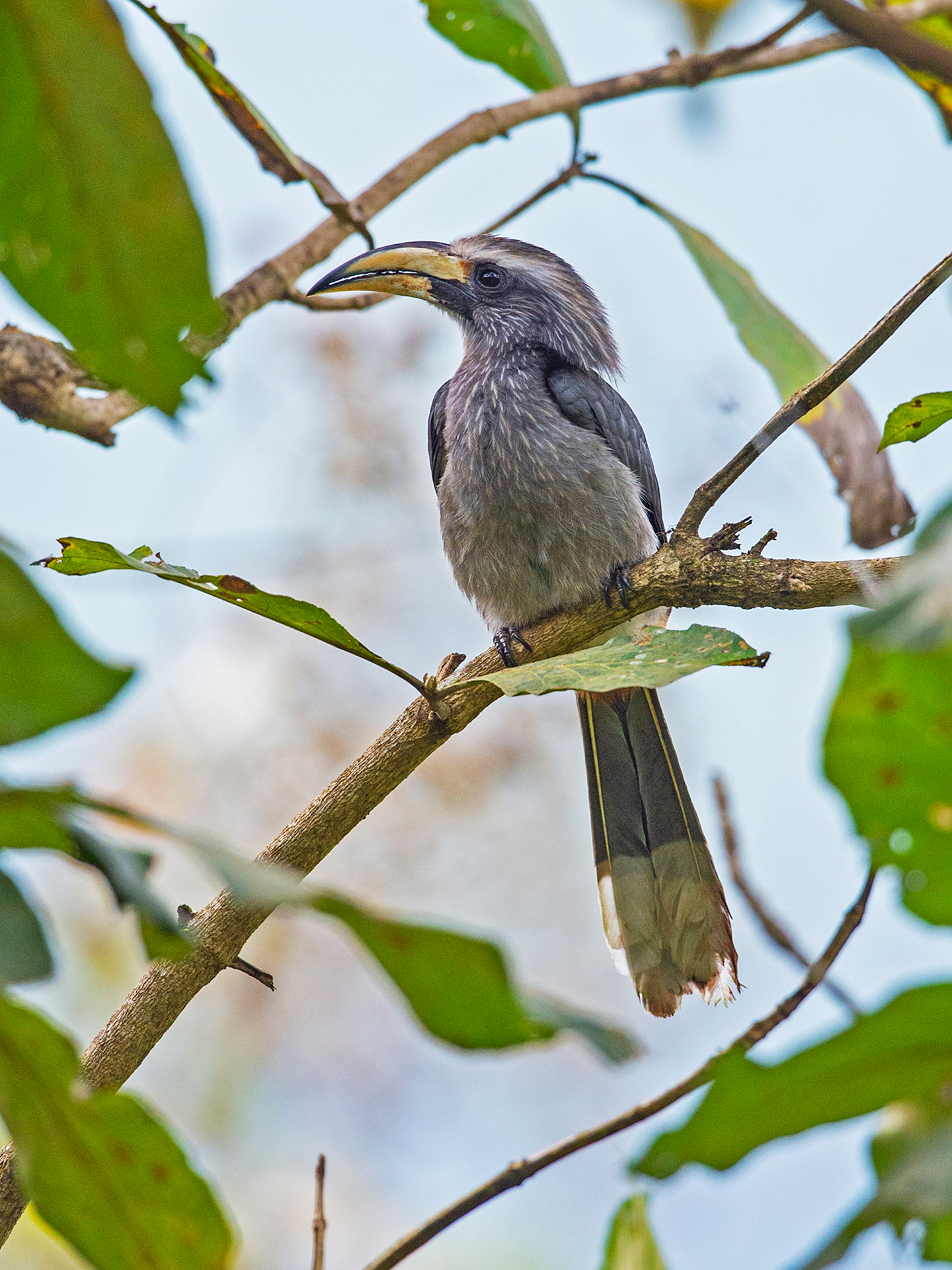 Like the Malabar grey hornbill the Myristica malabarica tree is endemic to the western Ghats. No surprise then that they are among the bird’s favourite trees. Photo: Dinesh Valke - CC BY-SA 2.0 Malabar grey hornbills tend to prefer dense forests, but they are still easy to locate because of their loud calls. Photo (right): Dhritiman Mukherjee

Malabar grey hornbills are emblematic of the rainforests of the Western Ghats. The hills and the forests often resonate with their laughter. Their low, swooping flight over clearings, or from tree to tree, are as integral to the rainforest as are the Myristica trees that are their favourite. As more forest is lost to agriculture, these birds are increasingly also found using a matrix of forest-agriculture landscapes. Areca nut, coffee, and cardamom plantations are also used by Malabar grey hornbills as long as nesting and fruit bearing trees are in the vicinity.

Throughout my stay at Agumbe, I felt like I was never very far from these inquisitive birds during daylight hours. I was constantly accompanied by their cackle whether I was along a forest stream or with a cup of coffee at the research station. They were never shy, but not tame either. Their calls were only matched in frequency by the greater racket-tailed drongos who were also putting up quite a show. There would be a duet among the hornbills at times, and as I waited for the monsoon rain to arrive, listening to them sing was the most pleasant pastime.