Malahari and Onti: Squirrels in a Dwindling Forest

Tracking the black or Malayan giant squirrel in the canopy, from its favourite fruit trees to its drey

Lying wearily, with her feet and body stretched long, her elegant tail placed along the branch, the black giant squirrel I named Malahari, stared down at me with half-closed peripheral eyes. She must have just finished a hearty meal. I stood still for a while and tried to reassure her, with all my telepathic might, that I intended no harm. She seemed to trust me a bit. She closed her eyes, took a short nap, opened her eyes again, and continued to stare. Clearly, she did not approve.

It was while I was studying the black giant squirrel or Malayan giant squirrel (Ratufa bicolor) and other squirrels, in the lowland tropical forests of Upper Assam for my Master’s dissertation that I came across and tracked Malahari, and another male I named Onti. They lived in an area which falls in the ambit of Dehing Patkai Wildlife Sanctuary and its surrounding forest fragments. 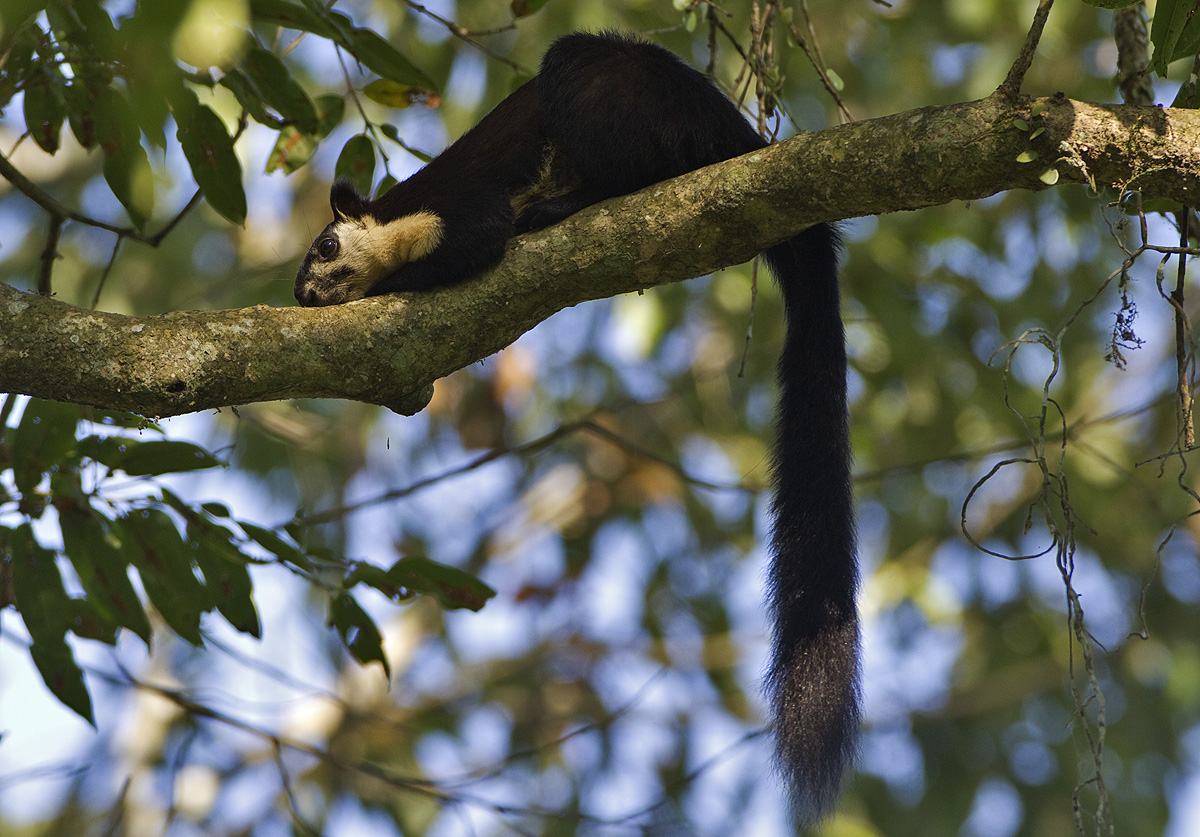 Malayan giant squirrels are arboreal; they live and travel mostly among dense, tree canopies. They very rarely climb down to the ground in search of food. Photo: Dhritiman Mukherjee

Black giant squirrels are distributed from Nepal in the west to Indonesia in the east. They can be found across various altitudes, from 500 m to 2500 m above sea level. This giant squirrel inhabits tropical and sub-tropical broad-leaved forests. It is one of the largest squirrels of the world, an iconic species that lives in the top canopy.

After walking the same forest path several times, one develops a sense of familiarity with its turns, trees, nullahs, and its inhabitants. I started frequenting the area where I had first seen Malahari. I realised soon that she was not much of an early riser. One day, I reached my spot well before I expected her to be there. She arrived, to my surprise, accompanied by her young one. The kit was just a little smaller than her, with a shorter, less bushy tail, and more prominent brown in the otherwise jet-black upper body and pale underside. The little one nimbly followed its mother through the same arboreal pathway. Such agility and grace! I climbed up a small slope and found the duo feeding on small fruits of Macaranga indica. The youngster’s undivided attention was on feeding, completely unwary of its surroundings. The mother, however, was watchful. She had stopped eating and was watching us intruders intently. Once she figured out that we planned to cause no harm, she was herself again. She groomed herself by rapidly scratching her body with her limbs. She also brought her beautiful tail forward and licked it profusely. To my delight, the duo then led me to their abode, one of their nests, which was not far away from the tree they were feeding on.

These squirrels build dome-shaped nests or dreys with a framework of twigs and dry leaves, high up on trees, sometimes quite exposed, at other times well hidden in the foliage. As a researcher, I found that developing an eye for detecting their nests was as important as learning to spot the squirrels in the canopy. Most of the nests I found were on the Indian rose chestnut or Mesua ferrea tree, locally called ‘nahor’. The dense foliage and evergreen nature of this tree makes it an ideal choice for building nests. Black giant squirrels usually build two or more dreys within their territory, which have variable degrees of use and maintenance.

Black giant squirrels are primarily seed-eaters, but can broadly be considered generalist feeders of the forest canopy. They eat small fruits like Macaranga spp, figs, and seeds of Magnolia spp whole, while they bite through bigger fruits like Bombax ceiba, Chisocheton spp, Dysoxylum spp, Horsfieldia kingii, Aglaia spectabilis, etc. to reach the seed, irrespective of whether they are ripe or not. Some consider them wasteful feeders, for they have a habit of dropping away partially eaten fruits, usually unripe ones. They earn the wrath of fruit and frugivore lovers for the same reason! But they do contribute to seed dispersal directly or indirectly, by making fruits available on the ground. Leaves, flowers, and bark also form a sizeable portion of the their diet. 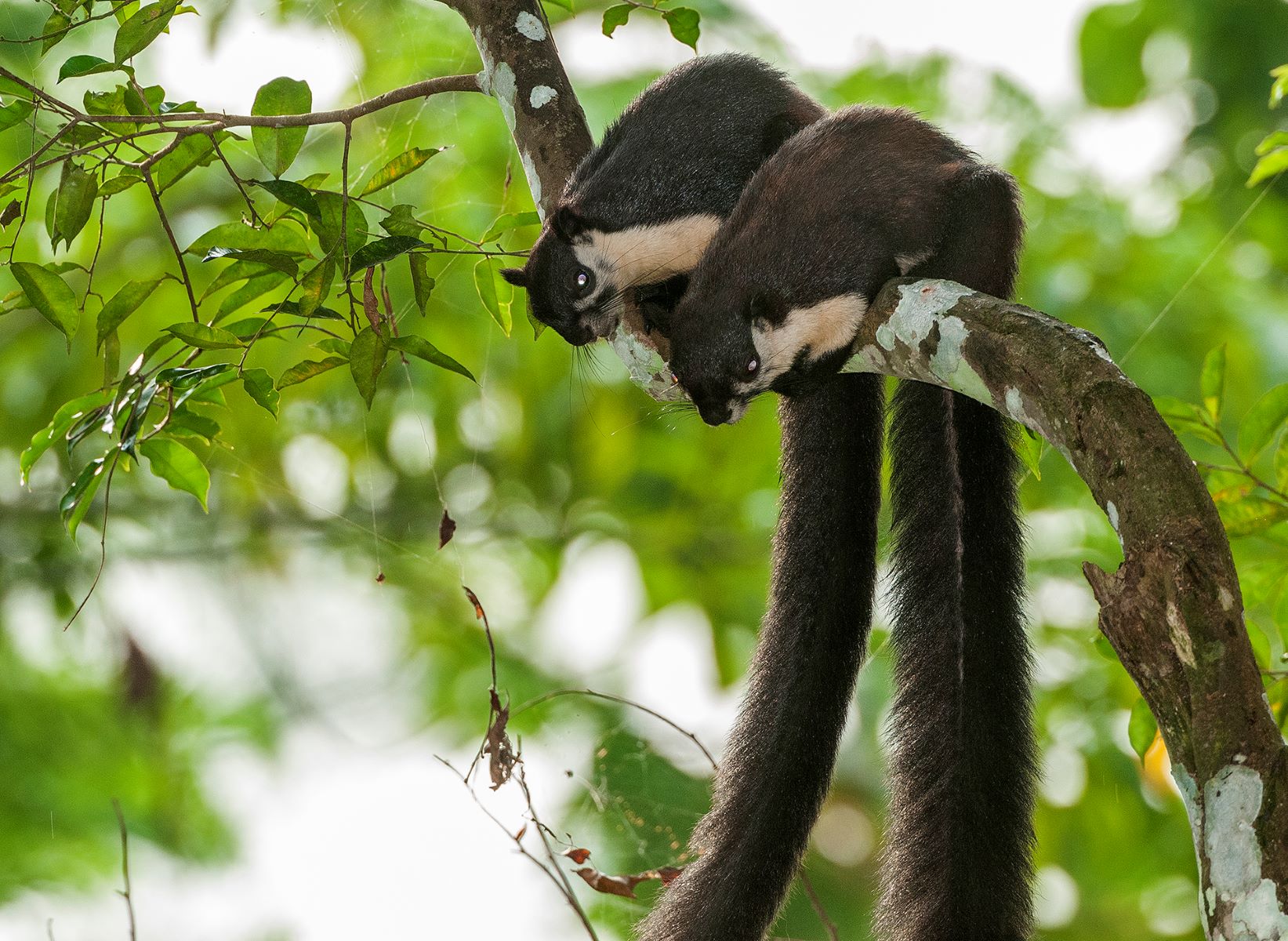 Malayan giant squirrels are mostly solitary animals, except for when they go through playful courtship periods where they chase and groom each other, and build nests together. Photo: Udayan Borthakur

Apart from breeding pairs and mother-kit pairs, these squirrels are usually loners, facing life by themselves.

Play and courtship behaviour of these squirrels involves chasing one another, usually up and down a tree trunk. This is followed by allogrooming, and lying comfortably on a branch. When these squirrels chase one another aggressively in random paths, and then separate, it is probably territorial defence, something I witnessed a few times.

While Malahari lives in a large patch of forest, the other squirrel I tracked, Onti, was a weaned out young squirrel living in Kakojan Reserve Forest, a small patch of about 25 sq km, in the same landscape. For a giant squirrel, this is not a great place to be. His favourite trees are being chopped off everyday, and there are very few conspecifics to mate with. He spends most of his time on a large fig tree, probably pondering the precarious future in store for him.

Getting to know Malahari and Onti revealed to me the habits of an important canopy animal and the impact of habitat loss on this species. The black giant squirrel plays several roles in the ecosystem, from dispersing seeds to regulating plant populations. It is also important prey for several small carnivores and raptors. Deforestation, degradation, and hunting have taken a toll on this species. It has vanished from small and degraded patches of forests in the landscape. Very few individuals are left, mostly in the relatively better patches of forest, and are restricted to areas with a good number of trees and canopy cover. Habitat loss is after all the biggest driver of biodiversity loss across the globe. Especially in tropical forests which are being rampantly destroyed, the lives of numerous Malaharis and Ontis are at stake.

Fragmented patches of forests with disconnected canopies pose a great threat to the Malayan giant squirrels. Their global population is declining, and they are listed as ‘Near Threatened’ on the IUCN Red List. Photo: Dhritiman Mukherjee 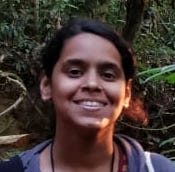 is an alumnus of the Wildlife Institute of India, Dehradun. Though her interests are constantly evolving, behavioural ecology is closest to her heart.