Meet the Pygmy Hog, the Rarest Pig in the World

Dr Parag Deka still remembers his first pygmy hog sighting vividly. It was a warm morning in April 1997 and his first day on the job at the Pygmy Hog Research and Breeding Centre in Basistha, Assam. When he arrived bright and early, the keeper sent him to one of the hog’s enclosures to get acquainted with the hog, but the animal was not ready for visitors, especially new ones. “I waited for hours until she finally came out of her nest,” he said, laughing, “but I wanted her to take the first step.” The hog was four years old, visibly pregnant, and “just so beautiful,” he says. “No wonder my first job became my life’s work.”

The pygmy hog was called Notag, named because she refused to be tagged on her first night at the centre. This she accomplished with the assistance of her breeding partner, Gabu. He was the namesake of a mahout in Manas National Park called Gaburam Boro who helped capture the first hogs in the breeding programme.

Twenty-two years later, Dr Deka is still besotted with pygmy hogs, the smallest, rarest, and according to him, “most interesting” pigs in the world. Once found across the grasslands at the foot of the Himalayas, these diminutive hogs were nearly wiped out between the 1980s and 2004, largely due to habitat degradation, habitat loss and degradation, and civic unrest in the region.

Thankfully for Notag and Gabu, the Durrell Wildlife Conservation Trust stepped in. In 1995 they set up a trust and started a captive-breeding programme that Dr Deka now manages. Their goal is threefold: To increase pygmy hog numbers, reintroduce them to the wild, and study the animal’s behaviour and ecology, which we know precious little about. Sounds simple enough, but like every project in conservation, the devil is in the detail.

An adult male sniffs around a receptive female, giving the staff at the breeding centre something to cheer about. Photo: Parag Deka

Genetic diversity is crucial to the survival of any species, and one of the core goals of the breeding programme. To this end, researchers at the centre use a mix of technology and observation. Software is used to generate breeding pairs, after which the animals are examined individually by the keepers and veterinarian, to ensure good health and spirit. “We also consult past notes,” explains Dr Deka. “Was the female a caring mother? What was the health of the offspring? How long until the young became independent?” Once these checks are complete, the male and female are put in an enclosure together, and “we cross our fingers and wait.”

If they do couple, and the young are healthy, the pair breeds together for a few years. This is how a “breeding line” is created. Over time, members of different breeding lines are paired together to create more diversity. 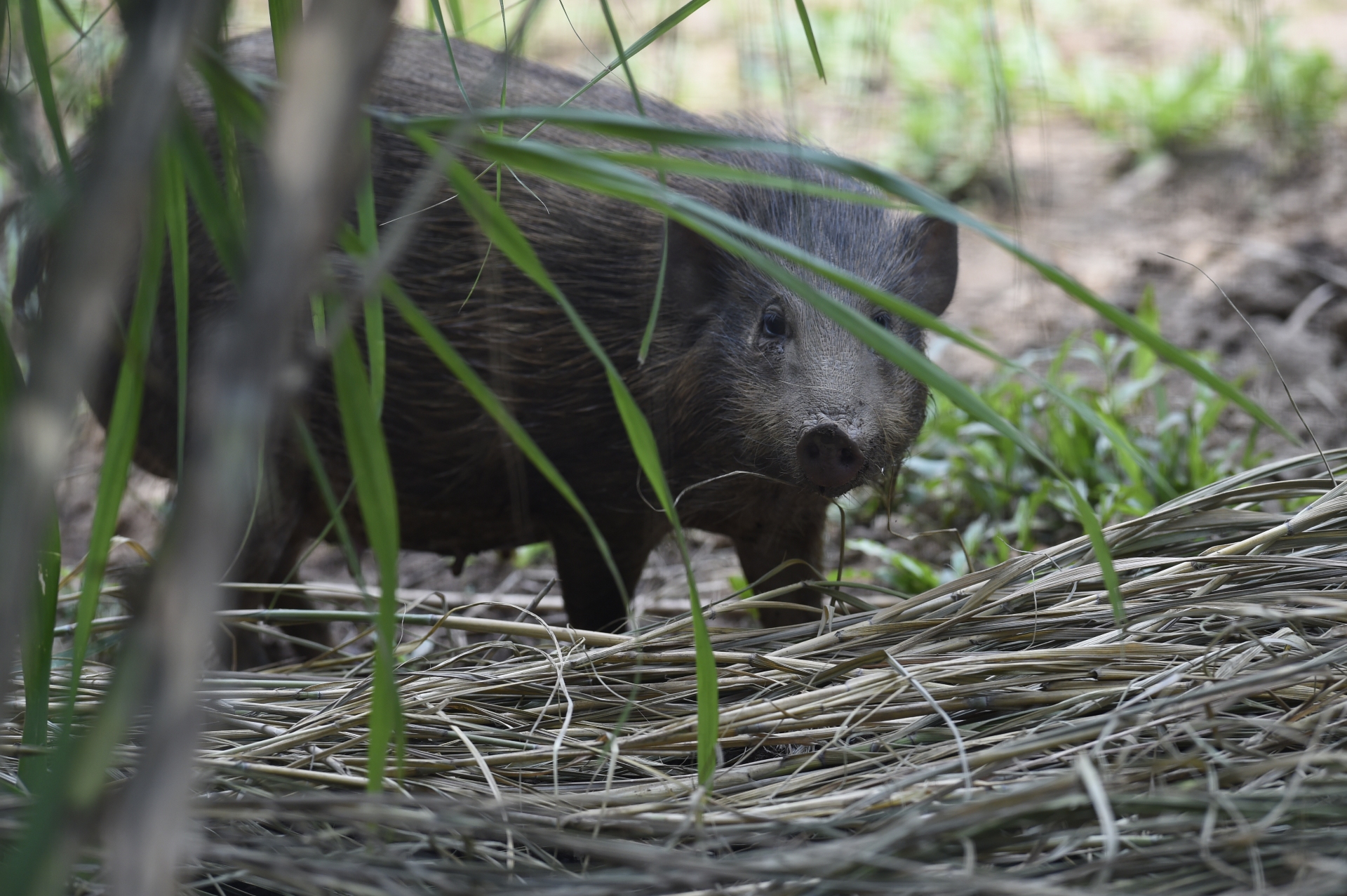 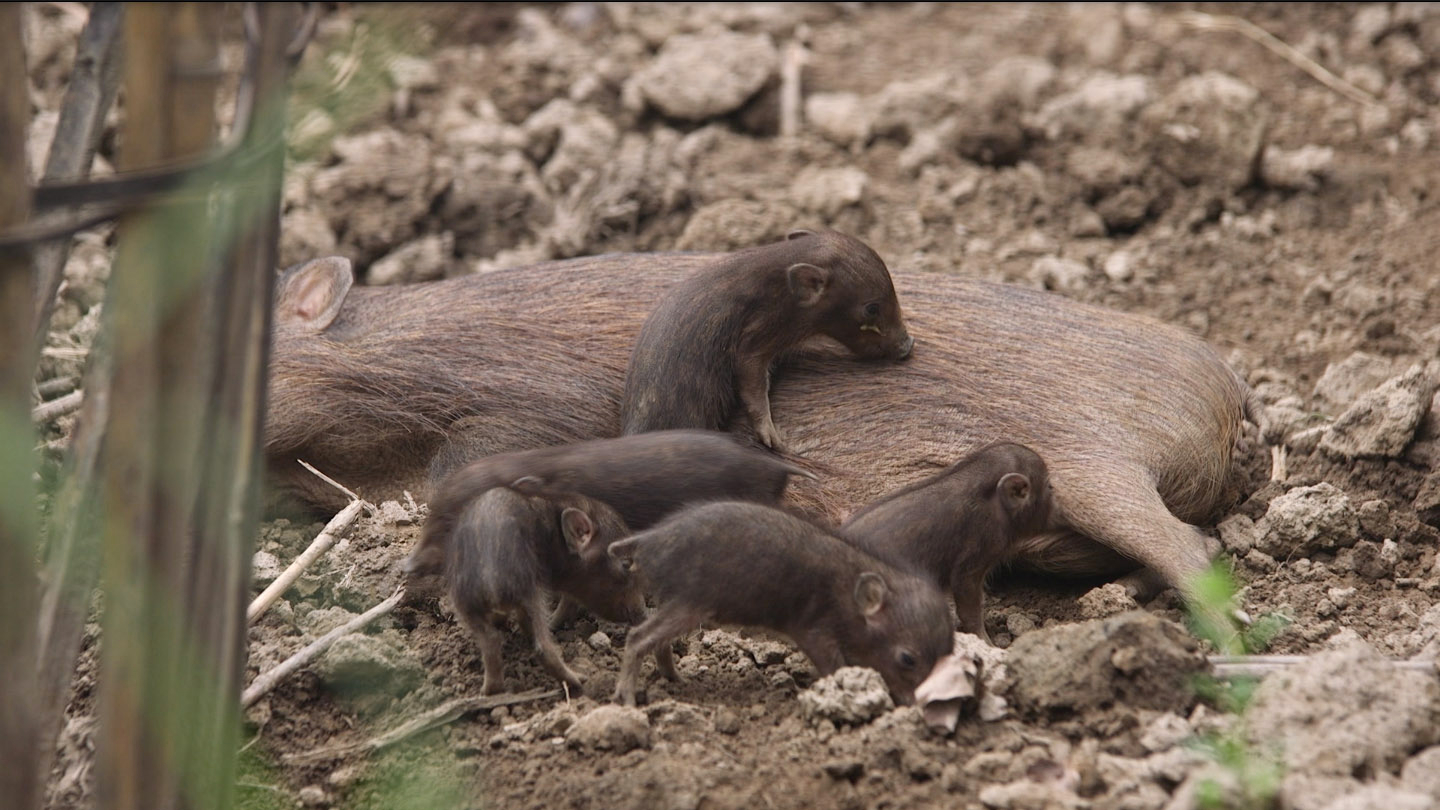 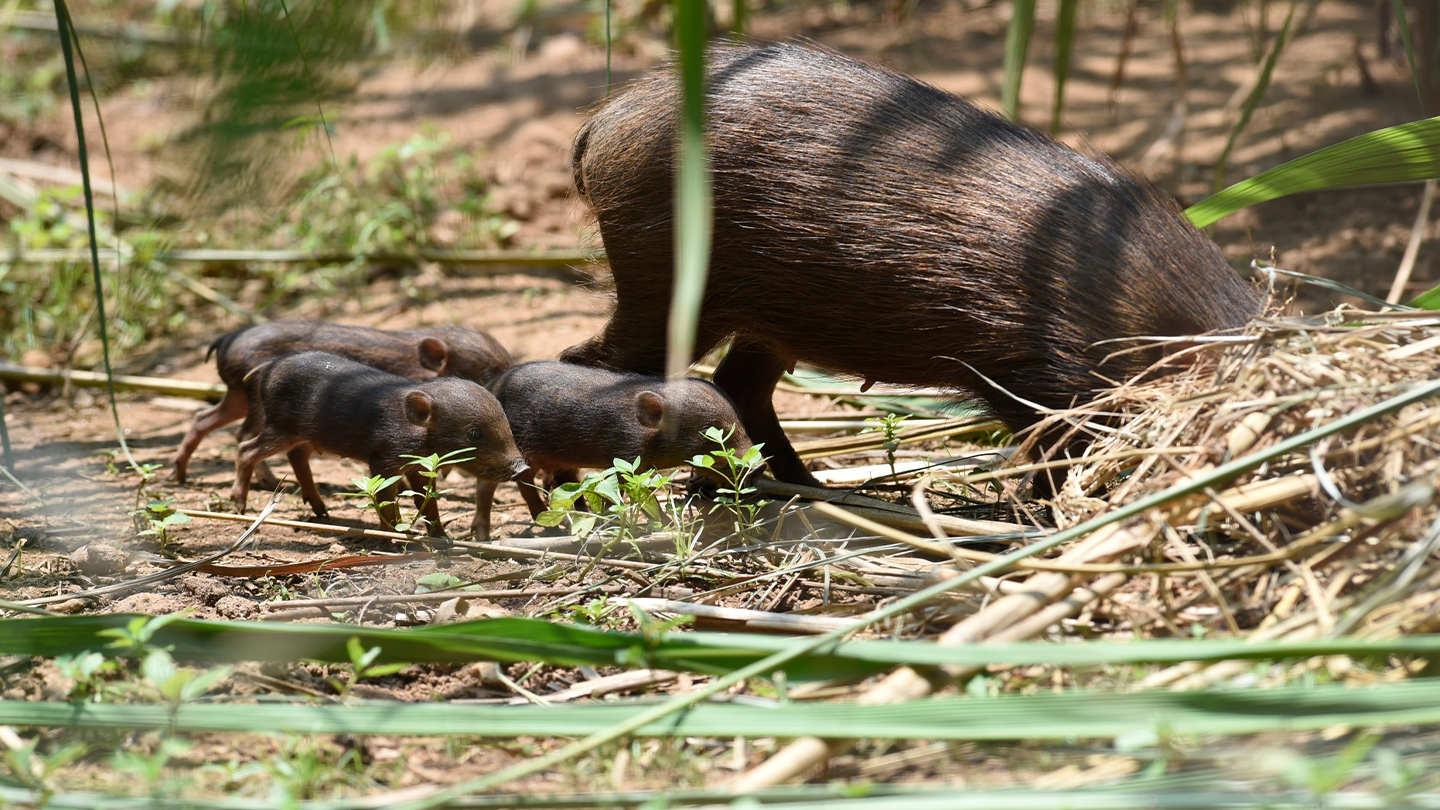 The gestation period for a pygmy hog is about five months. As a pregnant female approaches birthing day, she spends her time wallowing, eating, and building or rebuilding the nest. This behaviour lets the keepers know that the due date is around the corner. Photo (top): Craig Jones, Photo (above left): Parag Deka A week after their birth mama pig brings the little pigs outside the nest and familiarises them with their environment. Photo (cover and above right): Craig Jones

In the days following birth, the mother spends all her time in the nest with her babies, emerging only to eat and defecate. About a week later, when the young are a little stronger, she shifts her feeding cycle outdoors, and the little pigs slowly learn about their habitat.

Unlike most mammals that nest only during breeding season, “pygmy hogs build proper homes,” says Dr Deka, “with a thatch roof above and a shallow depression in the ground.” They use these nests throughout the year, as refuge from the heat in summer and the rain in the monsoon, building new nests every few weeks or months. All animals are involved in the nest-making, even if they are just a few weeks old. “The young might pull blades of grass from the ground for the nest, but they will do something.”

Dr Deka suspects that pygmy hogs can predict rain too. “Some mornings, we see clear, blue skies, but the hogs spend all their time repairing their nests. Over time, we have learned that this means it will rain later in the day.”

When the offspring are about 5-6 months old, they are separated from the mother and a microchip is inserted under the skin, behind the right ear. This allows researchers to track the hog’s movements and mating by ensuring there is no in-breeding at a later stage. 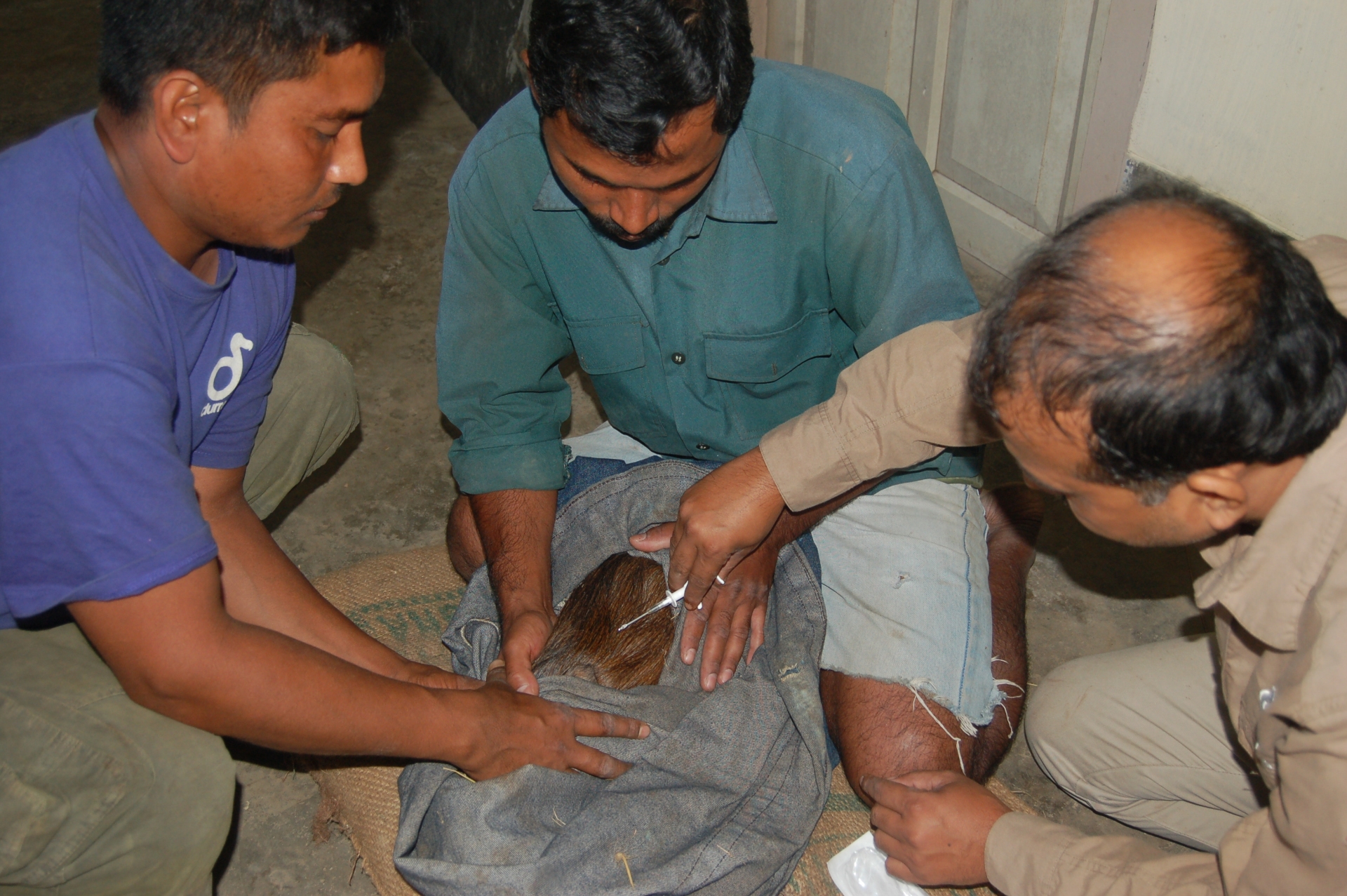 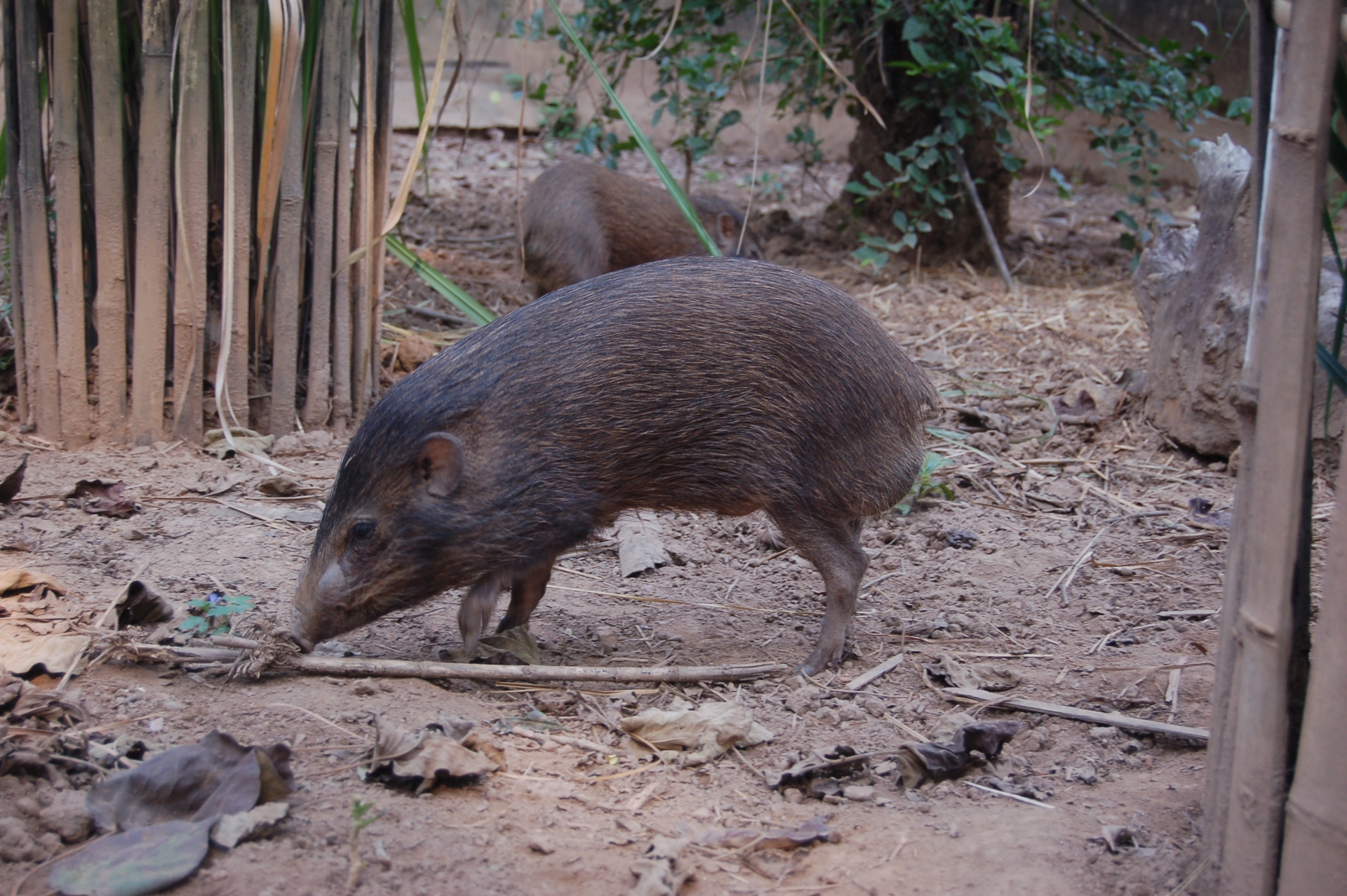 As part of the conservation process microchips are embedded in pygmy hogs so they can be tracked by researchers. Photo (left): Goutam Narayan Adult hogs begin their day around dawn, and spend their mornings snooping around the enclosure for bugs to eat. Photo (right): Parag Deka

Pygmy hogs at the centre are encouraged to eat insects for their nutritive value and because it is a wild food source. Around 8 am, their keeper brings the residents their breakfast: watermelon, papaya, and banana, and cereals including crushed wheat and flat rice.

They are especially fond of an Assamese variety of banana, locally called “athia kal”, says Dr. Deka, “that is also fed to human babies as it is packed with nutrients.” Once a week, the hogs receive an egg for a boost of protein. 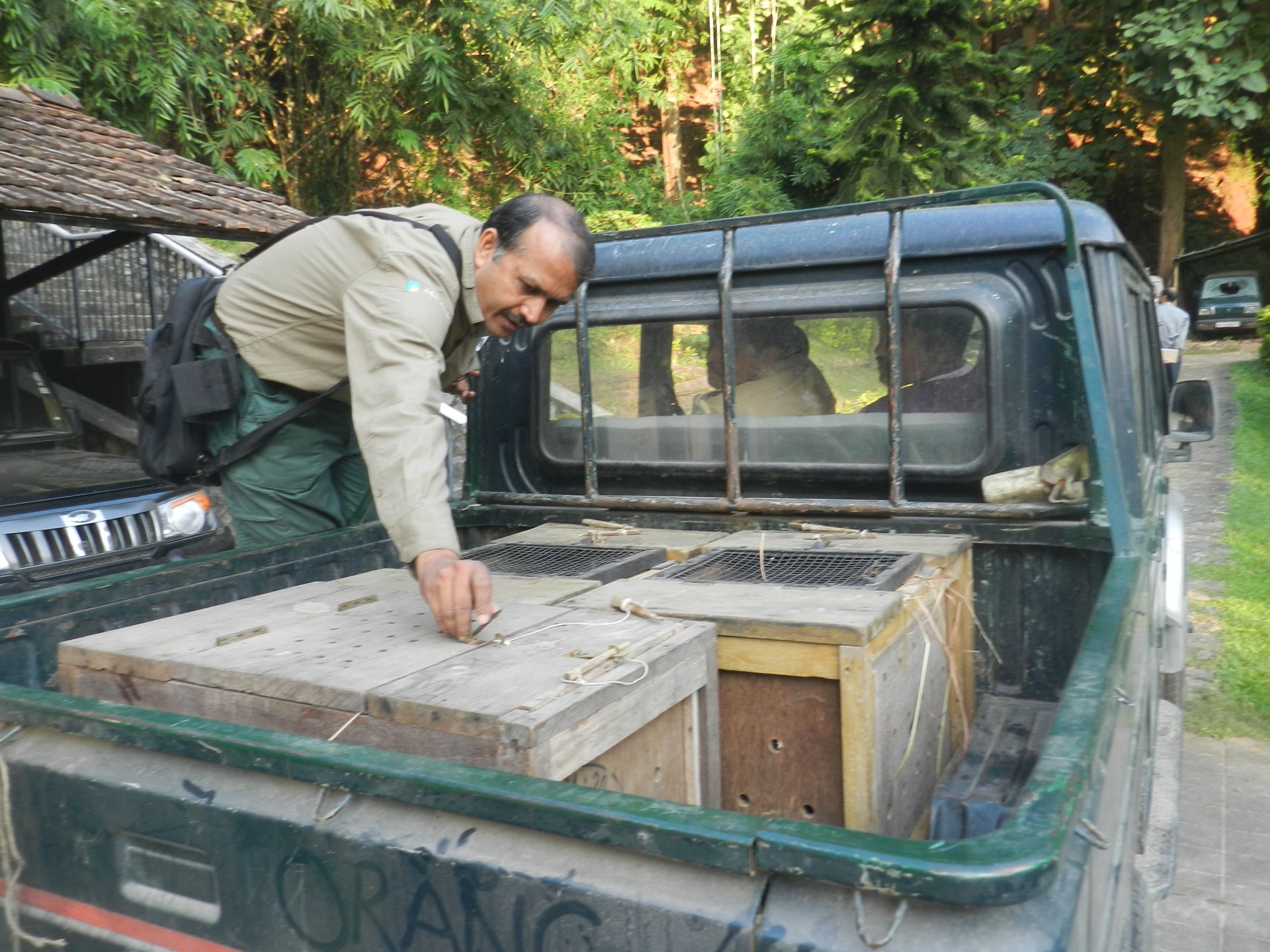 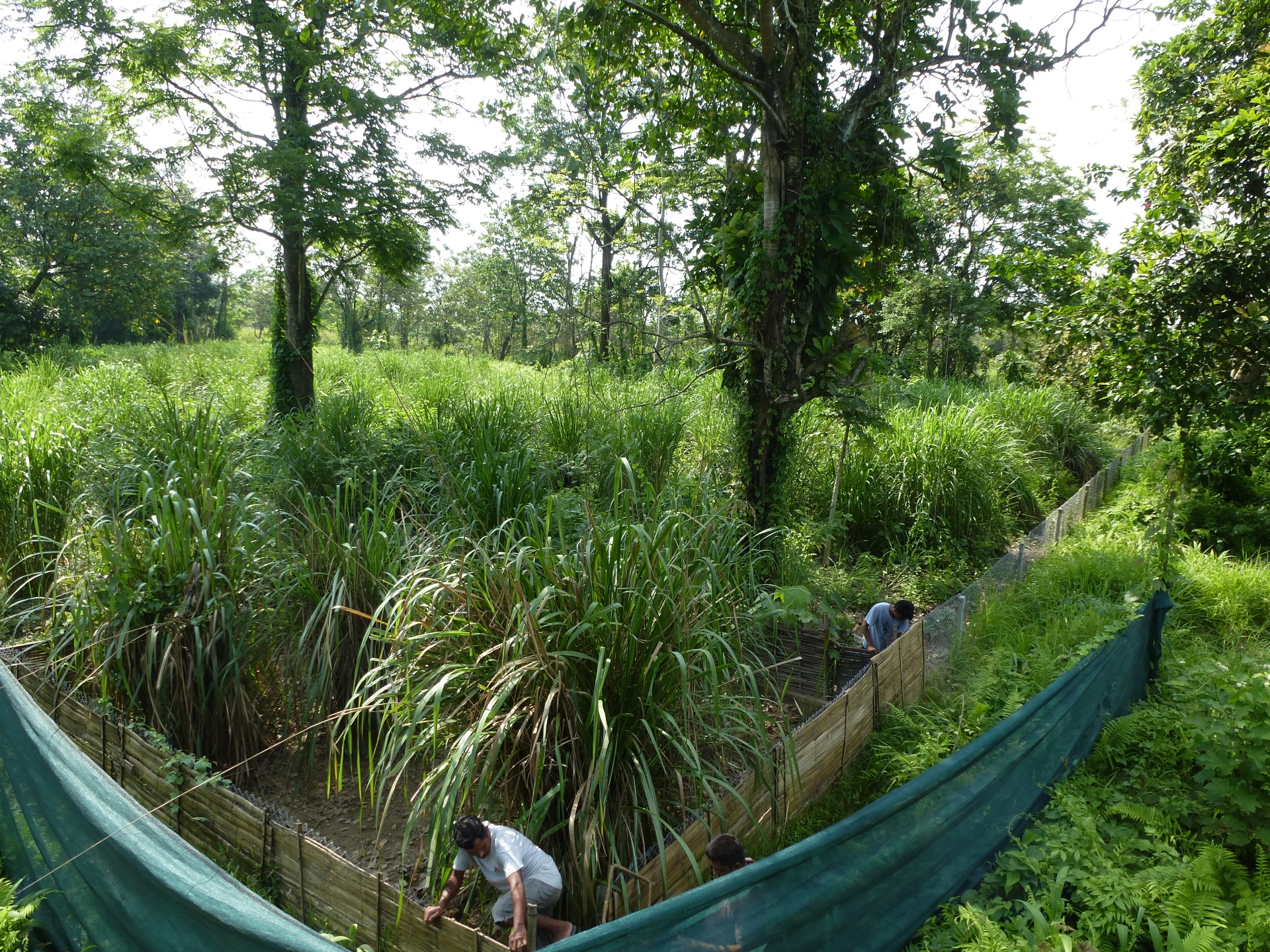 Reintroduction to the wild begins with a shot of tranquiliser to minimise stress. After that they are then transported in boxes along with familiar keepers. Dr Deka (left)) checks the locks before setting off for Orang National Park, where enclosures are set up for them. Photo (left): Gautam Narayan, Photo (right): Parag Deka

Once the pygmy hogs are independent, and in good health — generally around 5 to 6 months of age — the process of reintroduction to the wild begins. The first step is transporting the animals to the pre-release facility with a simulated wild environment. At this time, the hogs are tranquilised to reduce stress and transported in wooden boxes along with familiar keepers.

Enclosures are set up in advance, and the hogs remain here for the next five months, acclimatising to the sights and sounds of their new home. At this stage, the animals are given only 25 per cent of the food they receive at the captive breeding centre: incentive for them to begin foraging for their own meals.

Just before their final release into the wild, the hogs are fed extra-large portions of food. Photo: Parag Deka

Then it is time for release. At this stage, the animals are shifted to another enclosure, situated in the forest reserve area, where they spend the last three nights. “We feed them really well for the last few days. Give them lots of fruit, dig little water holes for them to wallow, make them really comfortable,” says Dr Deka. “Then it is time to say goodbye.”

Following their release, the same enclosure gets converted into a baiting station: The bamboo barriers are pulled down, camera traps are set up, and small treats are given to those hogs that return. This is a way for the conservationists to keep track of the animals, and their survival in the wild. Some hogs keep visit the baiting site for months, others barely turn back. 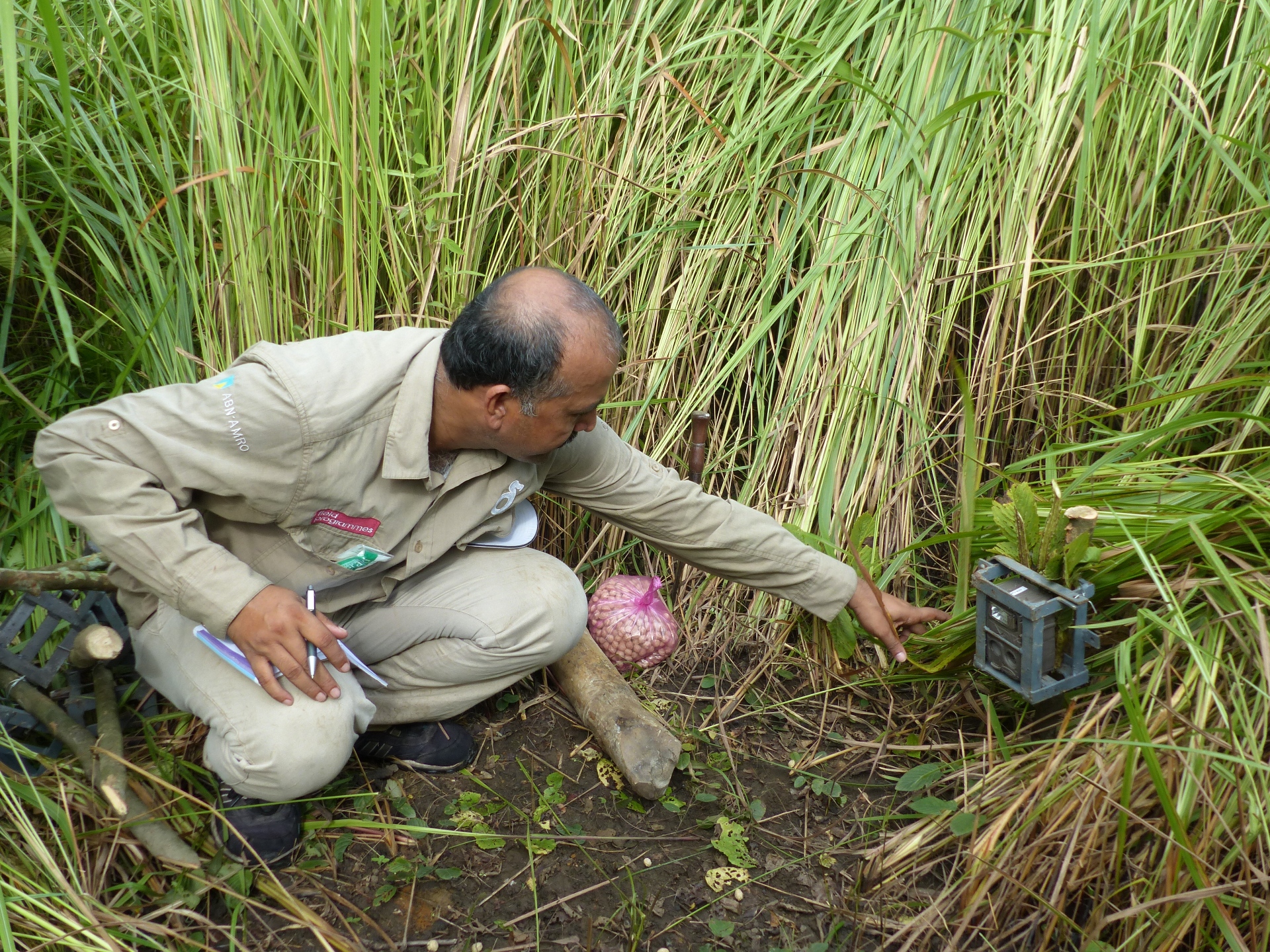 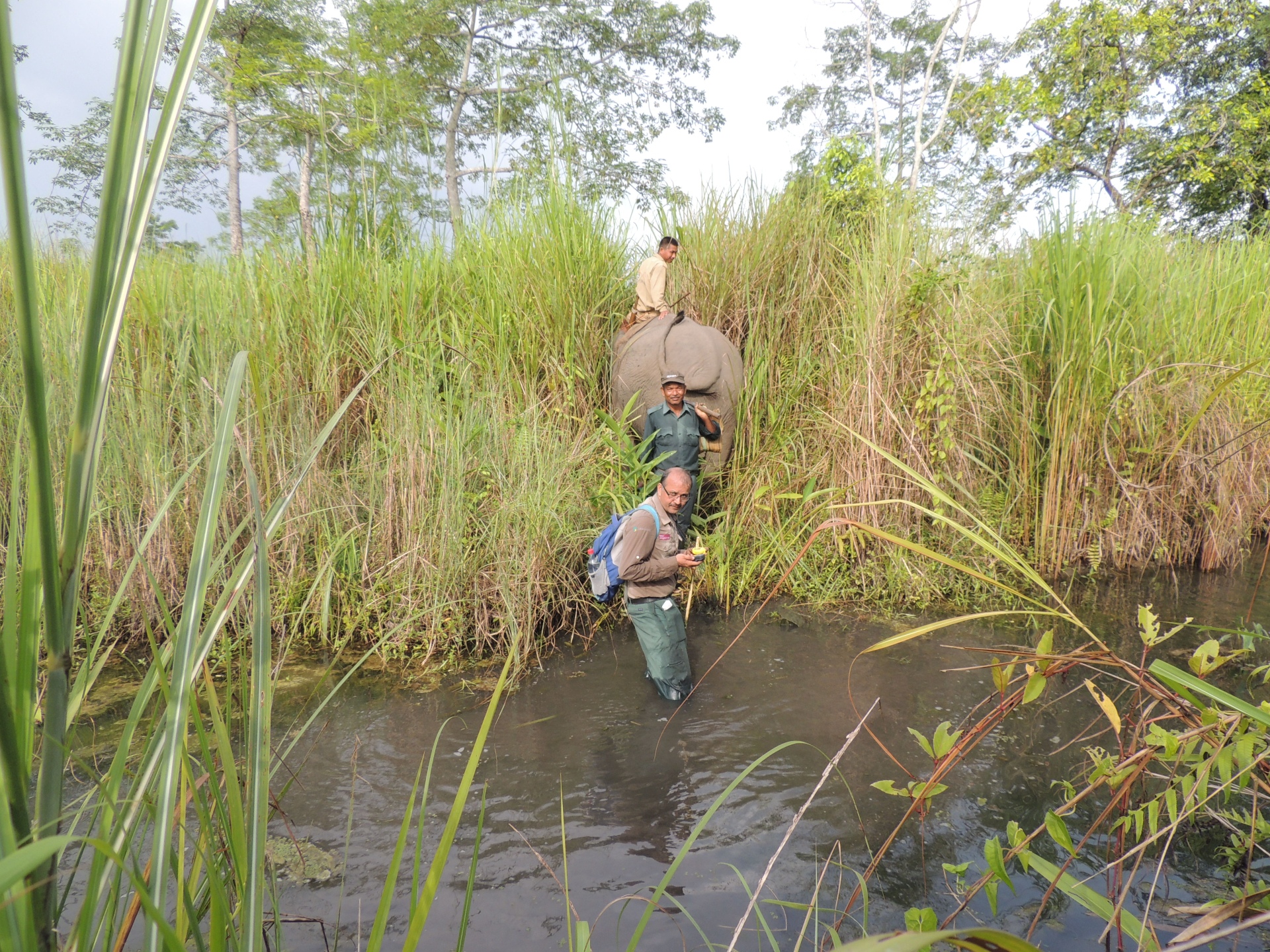 Once they have been released into the wild, hogs are monitored using camera traps and the implanted microchip. Photo (left) Tammo Buss, Photo (right): Dhritiman Das

Releasing the hogs into the wild is only half the job. Conservationists also have to keep track of them in their new homes, which they do with the help of camera traps. This is a time-consuming and gruelling task, especially considering the area that needs to be covered.

For example, Orang National Park is spread over of 78 sq km and Manas National Park is over 900 sq km, so deciding where to place the cameras can be tricky. “We look for scat, or signs of nesting, and place cameras around those areas,” Dr Deka says. Mahouts are particularly resourceful at this time as their knowledge of the sanctuary and its animals is immense.

It’s not much to look at, but this image of an adult and two babies is evidence that the hogs released by the centre are not just alive and well, but breeding too.

According to Dr Deka, camera trap pictures tend to be terribly boring or terribly exciting, but they are crucial to the process. “You have to look through thousands of pictures, most with no sign of a hog at all,” he explains. But every once in a while, you score a picture like this one (above).

Even the tiniest glimpse of the hogs on camera traps is exciting for researchers, and supplies them with a wealth of information. Seeing the next generation of hogs is undeniable proof that the programme is working. “I was on holiday when I saw it, and I remember jumping on the bed with excitement,” Dr Deka says. “I call it my Nobel Prize picture!” 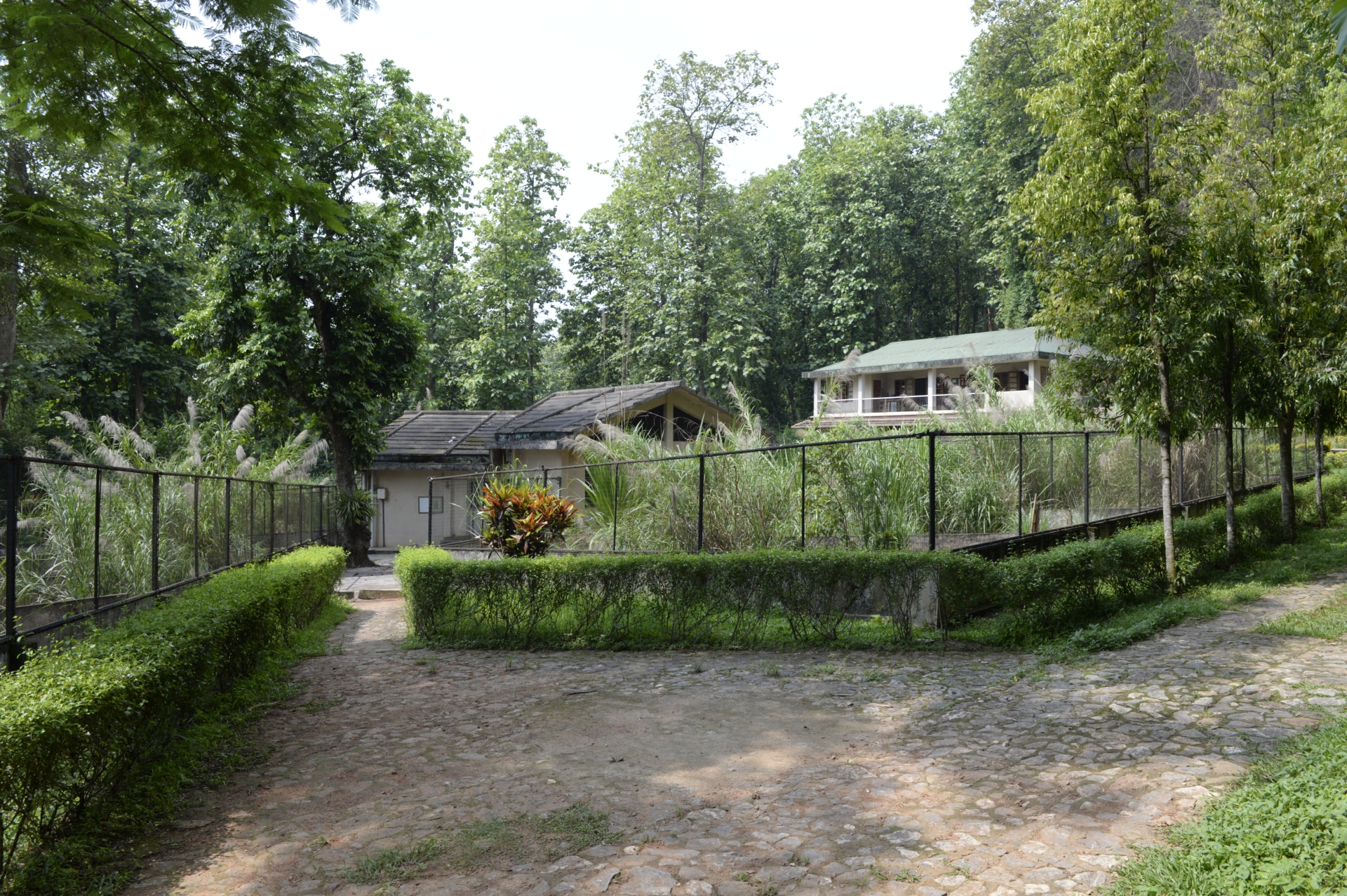 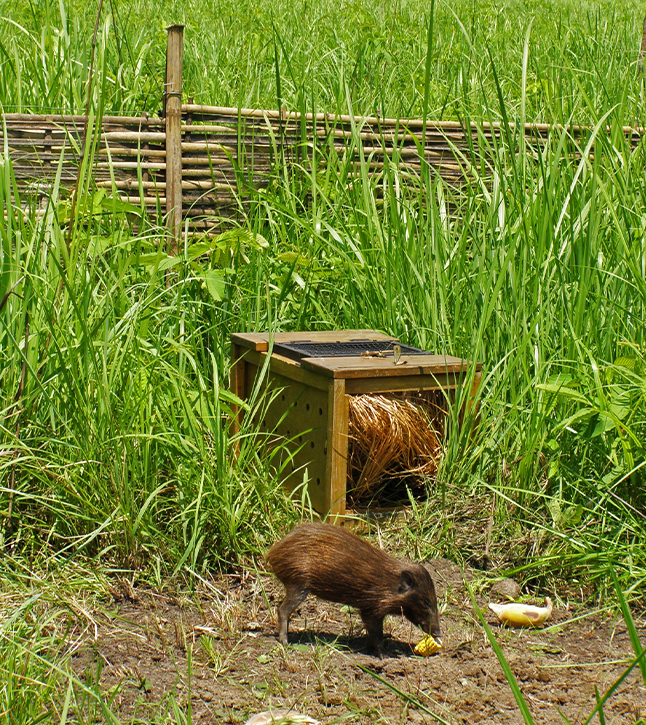 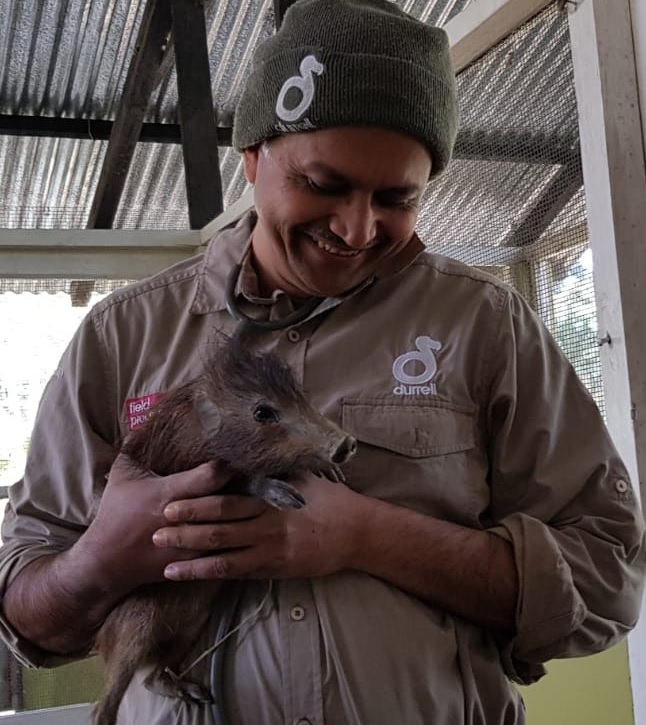 Scenes from the Pygmy Hog Research and Breeding Centre reveal that this is not just a cold and sanitised scientific programme. There is an emotional bond, and deep love and affection for the centre’s wards. Photos: Parag Deka

In the last two decades, the Pygmy Hog Research and Breeding Centre has introduced 116 hogs into the wild. “The only thing I can say is I’m glad we started in 1995,” says Dr. Deka. “If we began now, I’m not sure we would have had the same success.”

At the headquarters in Basistha (top) , a shifting population of about 60-70 animals are fed, bred, and eventually released into Orang, Sonai-Rupai, and Bornadi wildlife sanctuaries in Assam. As Dr Deka puts it, “We can keep them in captivity, breed them forever, and bring their numbers up, but without a sustainable habitat, no species can survive. Not the pygmy hogs, not us either.”