The Monkey with a Beanie: The Capped Langurs of Hollongapar

Destruction of forests is putting this primate’s future at risk. In the last three decades, their population has seen a 3O per cent decline

At 6 am on a misty December morning, I was walking through Assam’s Hollongapar Gibbon Sanctuary, looking for a group of capped langurs. For the next five months, I would be following two troops, trying to understand their behaviour and diet selection as a part of my master’s dissertation, but today they were being extremely elusive. Just when I was about to walk away, I heard rustling in the canopy. A capped langur was waking from its slumber. Curled underneath it, was another, and then another. As the sun rose, 15 langurs emerged from the tree I had been walking under — all snuggled together in small groups to keep warm, and perfectly still in a high, dense canopy. 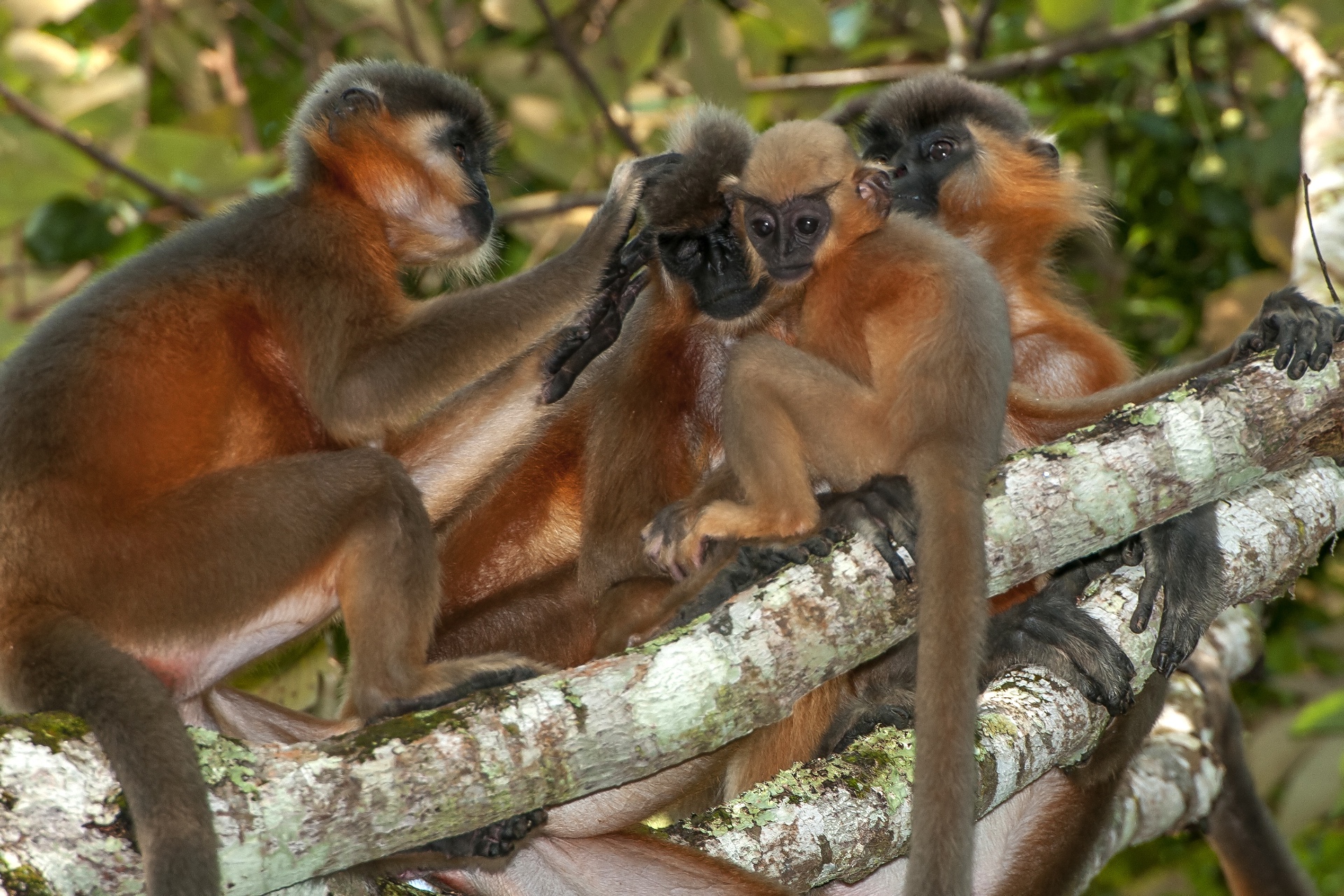 Capped langurs are arboreal, which means they live and travel among the high branches of extremely tall trees of Hollongapar Gibbon Sanctuary. They typically live in mixed troops that may have an adult male, accompanied by two to five adult females, some juveniles and infants. Photo: Udayan Borthakur

The capped langur (Trachypithecus pileatus) is a brightly coloured, tree-dwelling, long-tailed primate found in the forests of Northeast India, Burma, Bhutan and Bangladesh. Their distinctive tuft of dark hair, sticking out of the forehead makes it look like it is wearing a cap. They have black faces and orange to buff-coloured bodies. 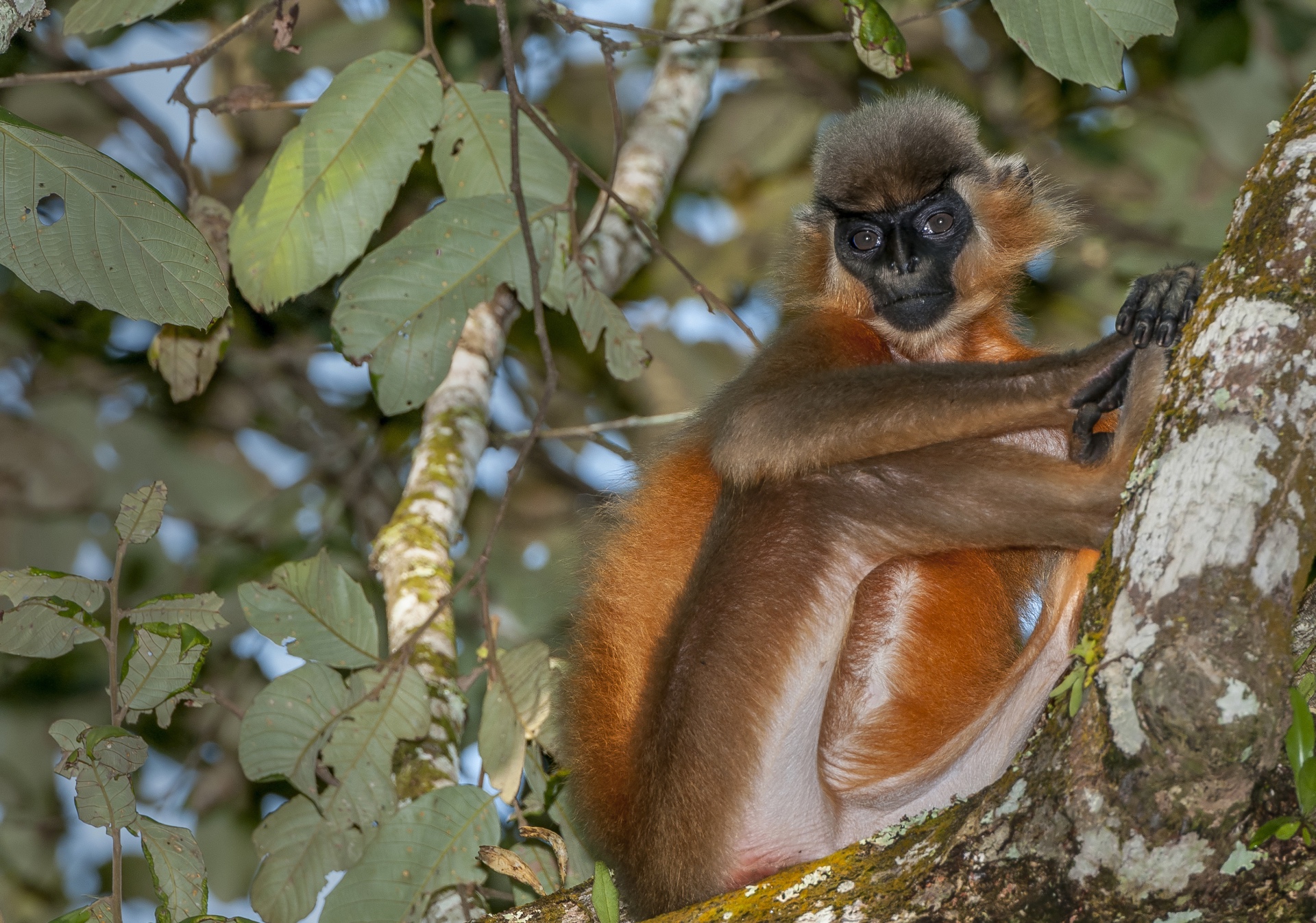 On a good sunny day, capped langurs with their black cap and bright golden-orange fur, is easily spotted in a dense canopy. However, their population is on a steep decline and the species is listed as ‘Vulnerable’ on the IUCN Red List. Photo: Udayan Borthakur

Most primate species like the hoolock gibbon are only found within the confines of the forest, the capped langurs, however, are found both inside the forest and on the fringes. Being naturally gregarious, they always tend to look for newer food trees within and outside the forest. 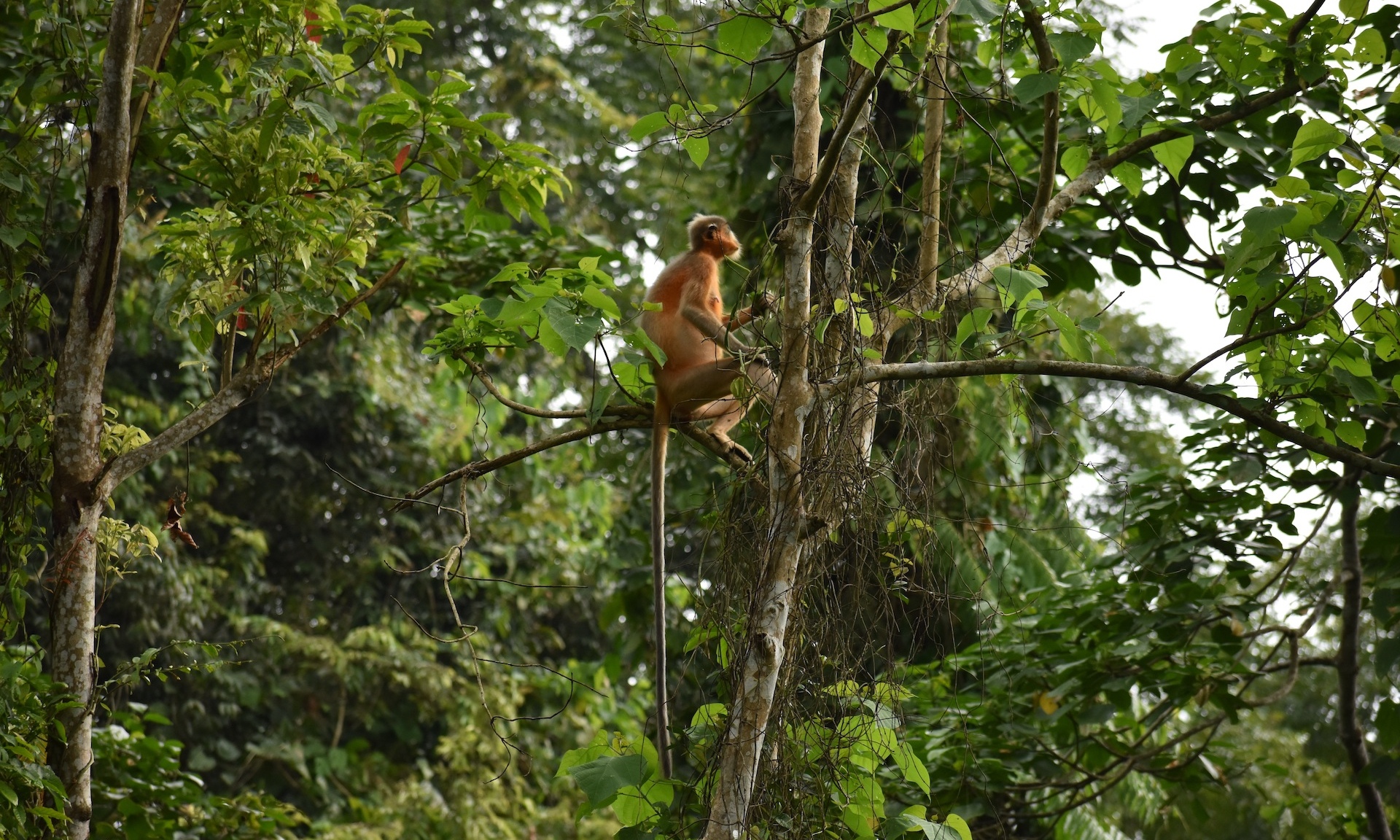 The tail of the capped langur is much longer than the length of its body. For instance, the head and body length of a male ranges from 60-70 cm, while the tail can exceed 90 cm. Photo: Santulan Mahanta - CC BY 2.0

This also makes them more vulnerable. In the last three decades, there has been a 30 per cent decline in their population and they have been placed in the ‘Vulnerable’ category by IUCN.

It is widely recognised that the most critical factor endangering primate populations is habitat destruction. Loss of habitats in primate home ranges is a matter of grave concern. Studies have established that primates are important seed dispersers in a rainforest and their movement and foraging patterns greatly affect the structure of the forest. Conversely, the survival of primates in a forest is highly dependent on the availability of foraging trees. For frugivorous or fruit-eating species like the lion-tailed macaque and for folivores or leaf-eating species like the capped langur, abundance of foraging trees in the forest is crucial for their survival.

The capped langur uses all four limbs to travel through high branches, as opposed to some primates who only use their arms to swing from tree to tree. They are noisy travellers, leaping across branches and crashing into trees with a thud before finding a spot to settle. Photo: Diganta Gogoi

Constant pressures exerted by human beings on forests are a cause for concern. Timber extraction by commercial interests, illegal mining and resource extraction activities are some of the factors driving habitat destruction in forests. Moreover, the extraction of non-timber forest products, selective logging, and other forms of resource utilisation cause disturbance to primate populations residing in these forests.

In Assam, an entire population of capped langurs and other primates were eliminated due to forest destruction during the 1970s and 1980s in forests of Gohpur, Gali, Nambor, Diphu, Doyang and Rengma.

Habitat fragmentation could be caused by changing patterns of land use, developmental projects on forest land, and linear intrusions like railway lines and roads cutting through forests. This makes it very difficult for tree-dwelling animals like primates to move around freely and fearlessly. Roads passing through forests are hugely responsible for roadkill as it thwarts canopy connectivity. At the Hollongapar Gibbon Wildlife Sanctuary in Assam, there have been several instances of capped langurs dying while attempting to cross the railway line that fragments the sanctuary. During fieldwork I remember a group running helter-skelter, in panic, at the mere sound of a train. A colleague confirmed that the troop had witnessed the death of a member only a couple of days before. 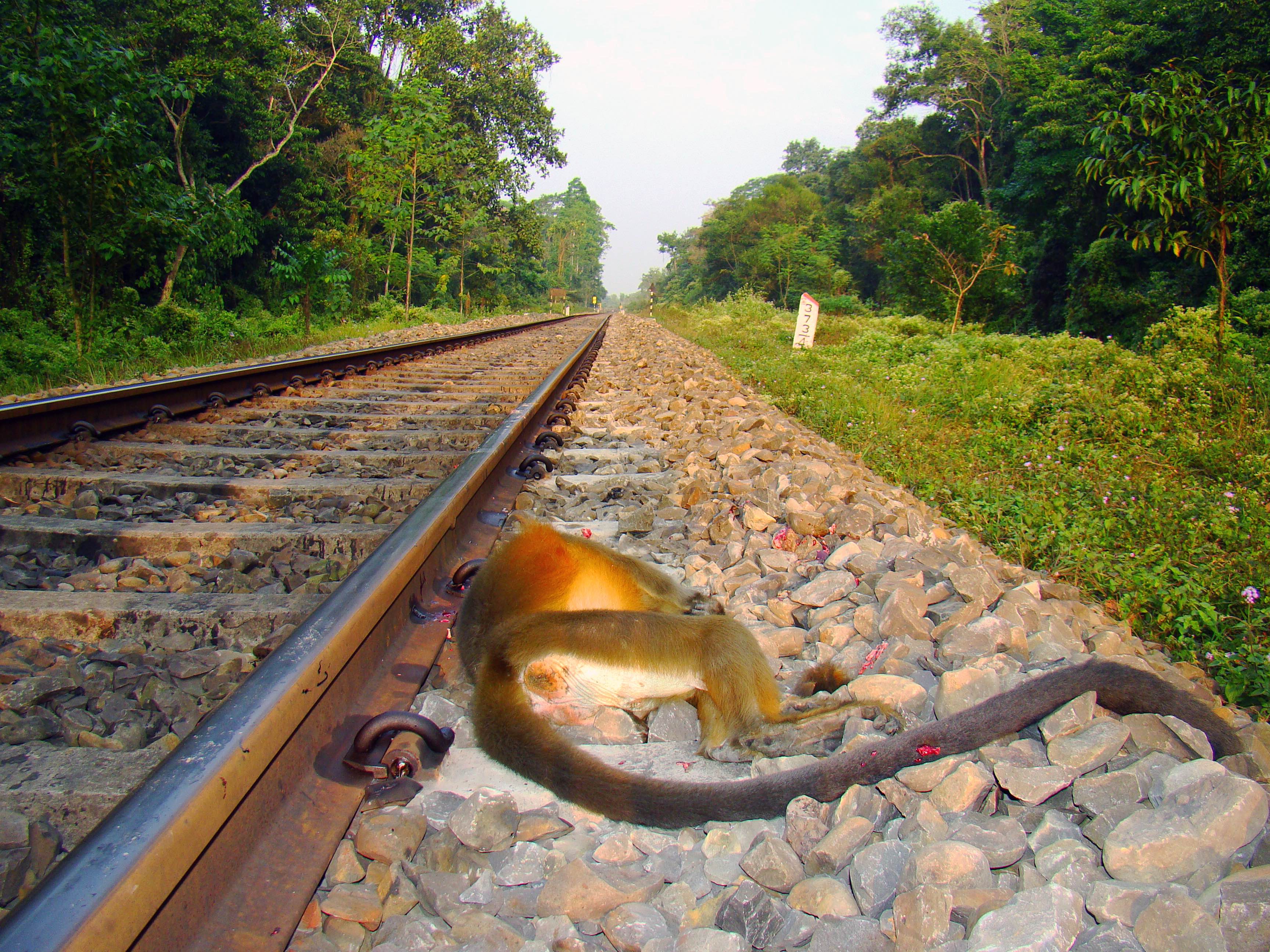 Primates are hunted for bush meat and consumed by many communities around the world. Hunting is known to affect the species diversity and composition of forests in all parts of the world. Consequently, the hunting of primates not only deters the growth of primate populations but also alters the forest structure. Hunting practices of indigenous tribes in the states of Nagaland and Arunachal Pradesh have led to a decline in numbers of primates, some of these hunting practices though traditional are in direct confrontation with the wildlife laws in India. Even though hunting is prohibited by the Wildlife Protection Act 1972 (Amendment 2002), there have been instances of primates being hunted in the northeastern part of the country after 1972.

In a 2007 study conducted in the rainforests of Peru, it was found that in areas where fruit-eating primates were hunted out, tree species richness had reduced by 55 per cent. Additionally, the density of trees dispersed by large- and medium-bodied primates was 60 per cent lower as compared to protected areas where primates were not hunted.

Invasive species may not directly impact primates, but they could be considered an indirect threat. Invasive plants like Siam weed (cromolaena odorata), bitter vine (Mikenia micrantha), and West Indian lantana (lantana camara) pose a great threat to native vegetation. The regeneration and growth of native plants are hindered by these invasive species, which take over forests at an alarming rate. Decreased regeneration of food plants due to these invasives means less food for primates, and this might affect their fertility and survival. In Hollongapar Gibbon Sanctuary, capped langurs have been known to feed on the bitter vine in the fringe areas where resources are often low. Such survival on low nutrition is known to affect mortality rates. 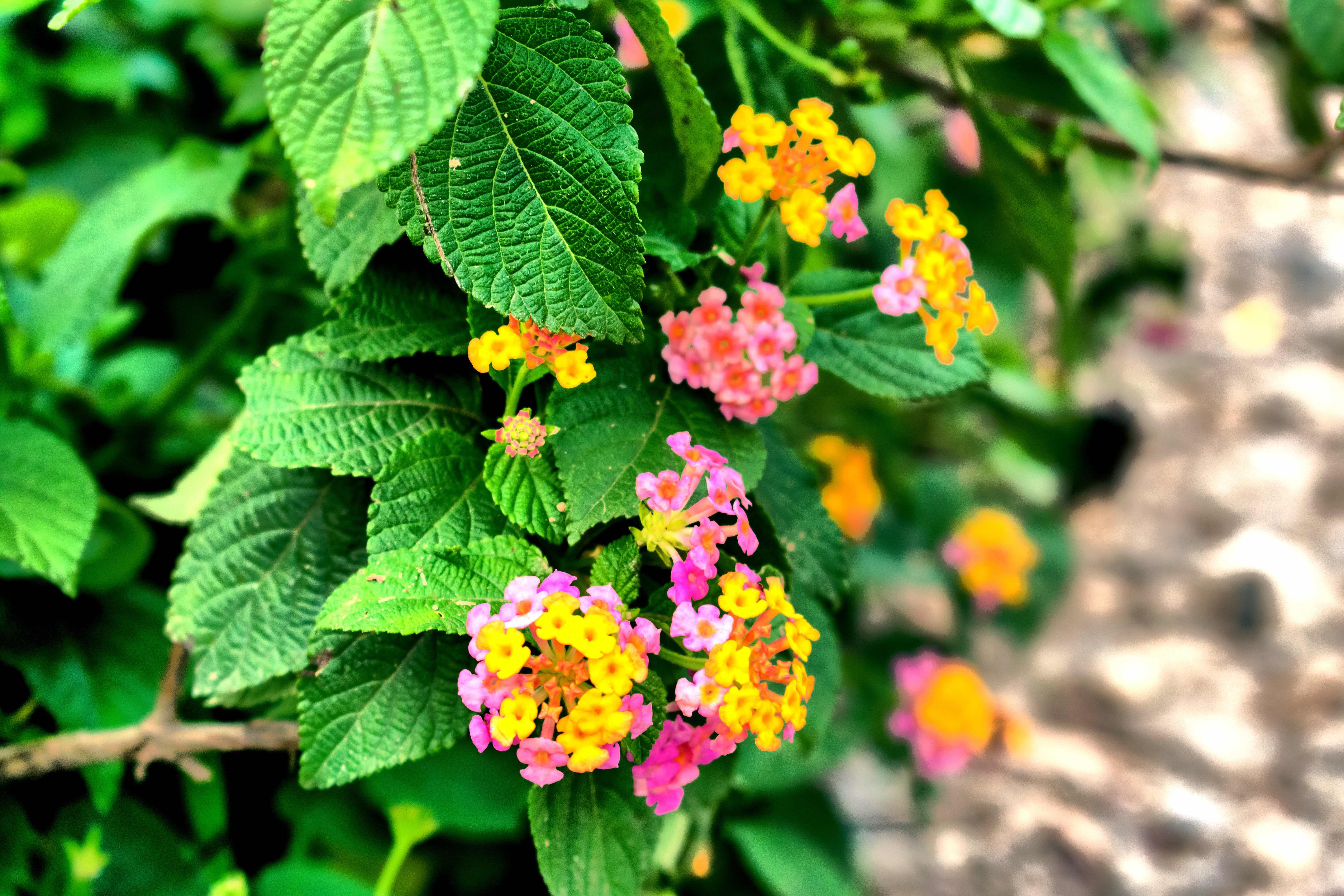 Indian lantana (Lantana camara) is an invasive species plaguing Hollongapar Gibbon Sanctuary. It was first introduced in India in the early 19th century as an ornamental plant but has now spread across several key habitats. Photo: Samratmaina2019 - CC BY-SA 4.0

Bittervine (mikenia micrantha) is a rapidly growing invasive species that has affected several forests. A single plant produces thousands of lightweight seeds that are easily dispersed with the wind and spread quickly across large habitats. Photo: Yercaud-elango - CC BY-SA 4.0

The future of these primates hangs in peril as human activities and large-scale destruction of tropical forests are making it harder for them to survive. In degraded and secondary habitats, regeneration of important food plants may increase food resources for the survival of this species. If we fail to protect our forests, it won’t be long before the capped langur vanishes. 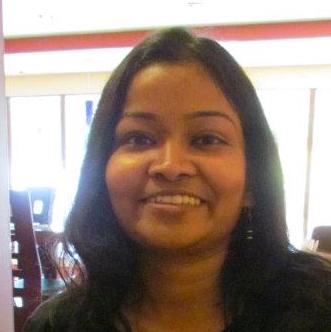 is a researcher with a keen interest in conservation issues in India. She has worked extensively in Northeast India including Hollongapar Gibbon Wildlife Sanctuary.