The Nicobar treeshrew is almost everywhere on Great Nicobar island. It settles in the canopy and, every so often, sounds a shrieking alarm call

It is hard to disappear in a forest when you are a five-member team lugging around camera equipment and tripods. But we try. Every time we step out in search of the shy Nicobar megapode, a chicken-like bird endemic to the Nicobar Islands, the forest guards help us build “hides”. Large palm leaves are tied together with vines to construct makeshift tent-like structures that we can disappear behind. We step inside, stick out camera lenses from gaps and sit, quietly for hours. Almost every time we settle down in our camouflaged hides, a pesky alarmist blows our cover. The Nicobar treeshrew (Tupiaia nicobarica), a mammal with a pointy snout, appears in the canopy above, flicks its bushy tail, makes eye contact, and screeches. It measures about 80 cm from muzzle to tail, and though it looks like a mix between a large rat and squirrel, it belongs to neither family. The treeshrew is classified in its own order, Scandentia. Its feet look surprisingly like human hands, with five separate, grasping fingers and slender nails.

I travelled with wildlife photographer Dhritiman Mukherjee and a crew of filmmakers to Great Nicobar, the last island of the Andaman and Nicobar archipelago, where they recorded endemic species of the region. Though this archipelago of 500-odd islands falls politically within Indian territory, geographically, it is separated from mainland India by over 1,200 km. The Andaman group of islands are peaks of the submerged Arakan Yoma Mountain range of Myanmar, while the Nicobar Islands are an extension of the Mentawai Islands of Indonesia. We’ve set up camp along Great Nicobar’s southern bay, where the Galathea river meanders through lush tropical rainforests to meet the sea. The leatherback, the world’s largest sea turtle, shows up to nest in the middle of the night on the bay’s pristine shore. In the littoral forests that hug the coast, curious creatures thrive. 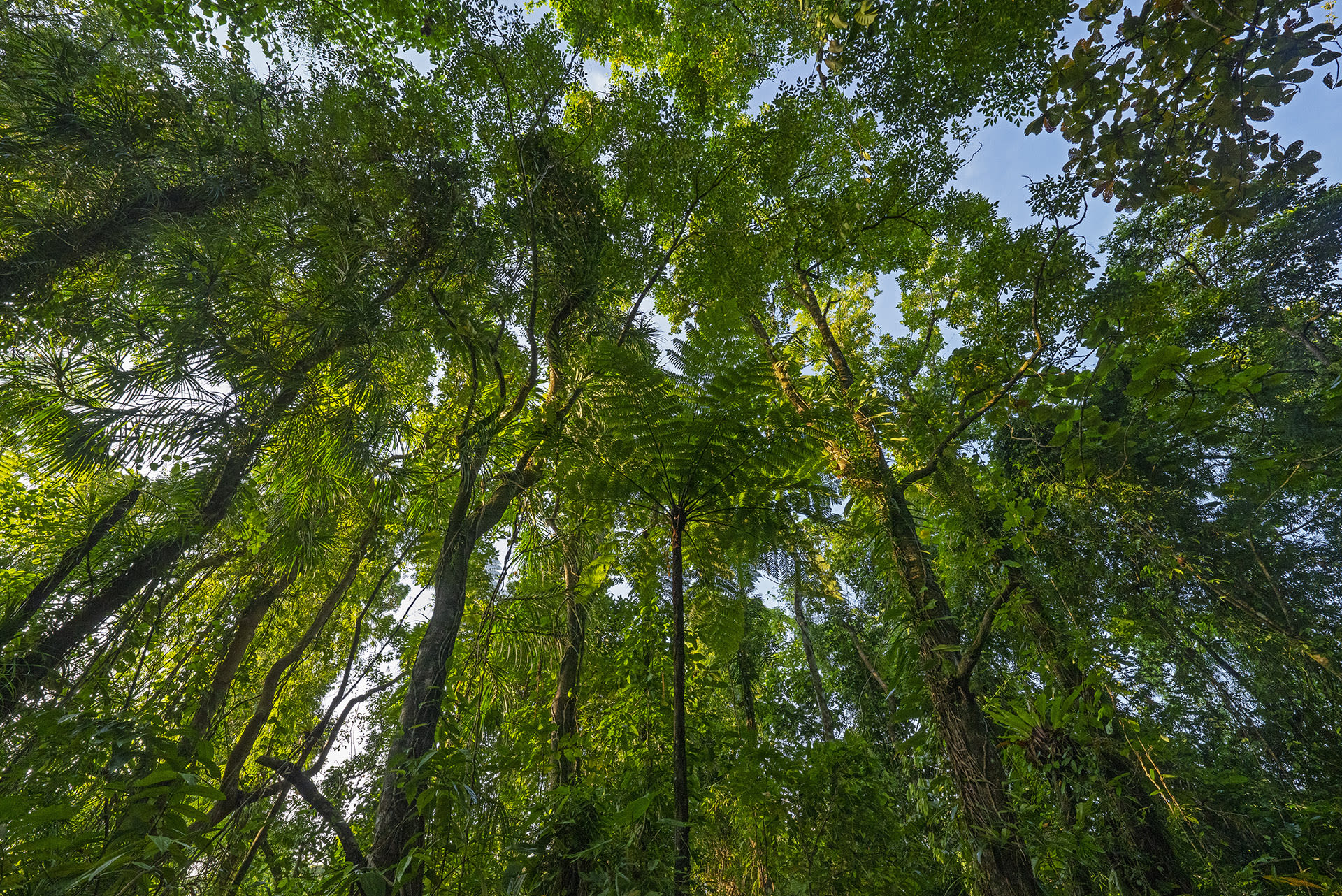 The Nicobar Islands host luxuriant tropical rainforests with interconnected canopies — an ideal habitat for the arboreal Nicobar treeshrew.
Cover Photo: The Nicobar treeshrew is endemic to, and found only on, two islands of the Andaman and Nicobar archipelago — Great Nicobar and Little Nicobar.

Remarkable things happen on remote islands. Surrounded by the ocean, isolated by the ecological cycles on the mainland, species take independent routes to evolution, diverging into “endemic” versions that exist nowhere else. For scientists, they are exciting places of discovery. Their relatively small population size and high levels of endemism hold secrets to evolution and the origin of life. For instance, out of more than 9,100 species recorded in the Andaman and Nicobar archipelago, a staggering 1,032 are endemic. One of these species is the Nicobar treeshrew. Treeshrews are found only in South and Southeast Asia. Of the 19 species worldwide, three are found in India; two are on the mainland, while the Nicobar treeshrew, as its name suggests, exists only in the Nicobar Islands.

Two decades ago, Meera Anna Oommen, now a conservation ecologist and associate director at Dakshin Foundation, travelled to the islands to study the Nicobar long-tailed macaque, an endemic primate but was quickly attracted to the shrew. She didn’t go looking for it. It found her, just like it found us. “Usually, your study animal is hard to locate. It might be cryptic or rare,” says Oommen. “But treeshrews would just show up wherever I was in the forest, stare and scream at me. Only once they had done it several times over, they went about their business.” Nicobar treeshrews are agile climbers that spend their lives in trees. Their brown fur blends with the bark, letting them go unnoticed until they choose to call.

Nicobar treeshrews have conspicuous ears, large beady eyes, and, like most insectivores, a long snout that helps them sniff and pick out insects.

Treeshrews can’t help calling out. They are active, alert animals “that border on the neurotic,” writes Louise Emmons in Tupai: A Field Study of Treeshrews in Borneo. In fact, they are so skittish that most sub-species of the treeshrew follow “absentee-parenting” where females visit their nests to feed young ones for a few minutes once in two or three days, so they don’t give up the location to predators. Every species can also be distinguished by its distinct call, writes Emmons, who spent a decade studying treeshrews in Borneo. Even a single species has a rich vocabulary.

During Oommen’s study, she recorded at least four kinds of vocalisations of the Nicobar treeshrew. There were single noted “squeals” when treeshrews were foraging. But when they saw predators or intruders like us, the squeals turned into relentless, loud squeaks. Who are they trying to warn? Others of their kind, Oommen reckons. Nicobar treeshrews form monogamous pairs that are always close to each other, whether they are resting or foraging. They also defend their territories fiercely. “On a single fruiting fig tree, you may see several pairs running up and down,” she says. The alarm call is a warning to everyone.

On a particularly hot, muggy afternoon, a pair of treeshrews hover above our hide on Great Nicobar. Taking turns to stare at us, they squeak for 30 straight minutes. “It’s like the siren of an ambulance,” says an annoyed Siddhartha Goswami, a filmmaker on the team. “It’s the forest’s surveillance drone,” I add. “Jungle ka jasoos!” whispers Mukherjee.

There is another “shriek” of protest that it utters when birds get close to it. During her fieldwork, Oommen spotted two kinds of birds in particular that get close to the shrew. 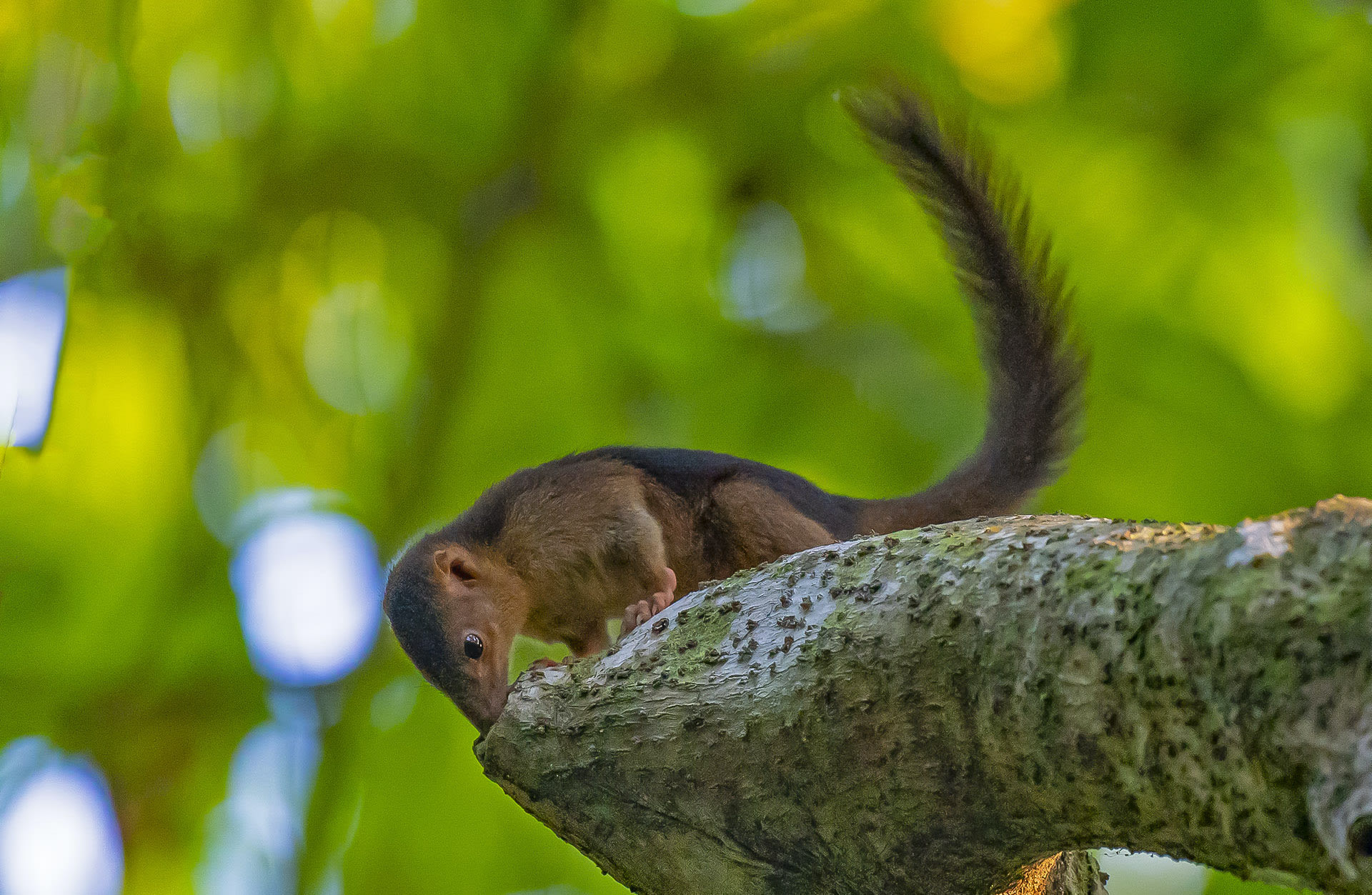 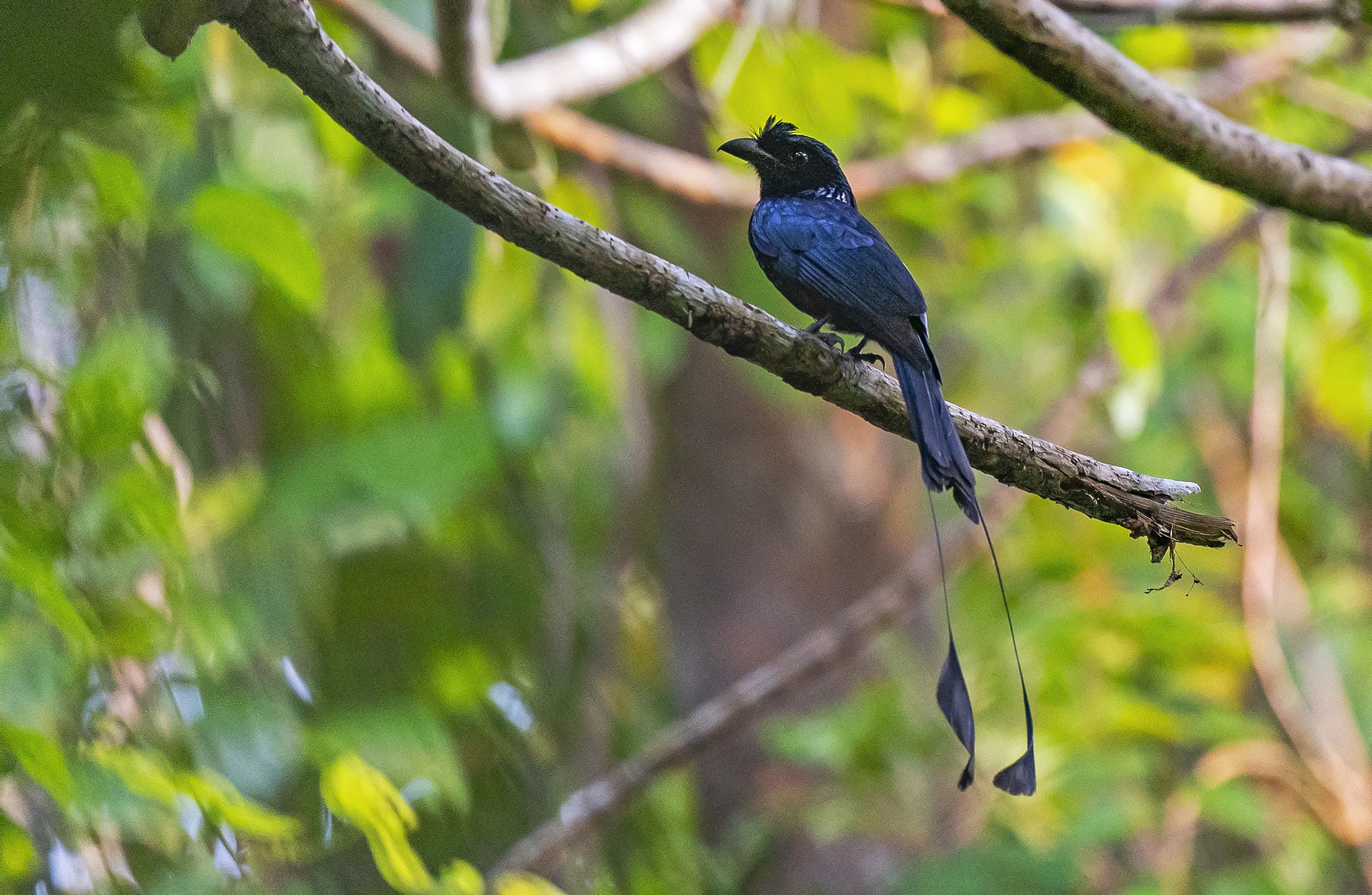 The Nicobar treeshrew spends more than half its day foraging for food. (Right) The greater racket-tailed drongo lurks around a treeshrew and is quick to grab any insects flushed out by it.

One of them is an infamous mischief-maker. If you spot a Nicobar treeshrew in the forest, chances are you’ll see a racket-tailed drongo lurking around. “Drongos are kleptoparasites,” says Oommen. “They follow other species around so they can steal a quick meal.” When a treeshrew flushes out insects while foraging, a drongo swoops in and grabs a bite. This is typical behaviour for drongos who are infamous as petty thieves, stealing hard-earned meals from woodpeckers and babblers. However, on Great Nicobar, a new, unusual member joins this feeding party. Unlike the riotous drongo and treeshrew, a calm and composed sparrowhawk, a raptor at least three times the size of a treeshrew, sits at a distance, also waiting for it to flush out a larger meal, perhaps a gecko. If the raptor wanted to, it could easily take off with the treeshrew firmly in its talons. Yet, it chooses to wait. “It’s the drongo that plays the mediator, keeping the delicate alliance going,” says Oommen. Every time the sparrowhawk gets too close to the treeshrew, the drongo sounds an alarm, alerting the fellow forager. Does the treeshrew gain from the alliance? Once in a while, the drongo may also caution the treeshrew of other predators such as a reticulated python or serpent eagle flying above. As Oommen explains, the tree has no choice; since it can’t drive the sparrowhawk or drongo away, it accepts the somewhat unequal alliance and stays.

On the Nicobar Islands, the treeshrew has few predators. However, it is listed as “Vulnerable” on the IUCN Red List because of its limited range. Eighty per cent of Great Nicobar is notified as a reserve forest. However, an ambitious new plan by Niti Aayog is slated to alter the face of the archipelago. Thirty per cent of Great Nicobar has been de-reserved for a transhipment port, airport, and large developmental projects. “If the continuous canopies are affected, the treeshrew’s future may be threatened,” says Oommen.

For now, it lives a relatively secure life. By the end of our three weeks, I get used to its racket. It follows us everywhere we go. We catch only a fleeting glimpse of the elusive Nicobar megapode, but the treeshrew, I know, is always watching. On another muggy day, as we settle in yet another hide, Mukherjee says, “Shh. Silence!”. As if on cue, a treeshrew squeaks! 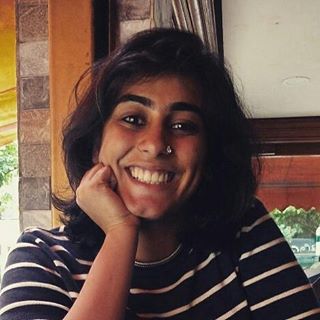