Nilgiri Tahr: The Little-known Mountain Monarch of the Anaimalai Hills

The soaring 35-degree-C tropical sun beat down on us as we navigated our way through vast stretches of undulating montane grasslands. In the February sunshine the mature long grass glistened like gold. The wind carried with it a vehement gust of hot air. My team and I were on an expedition to study the Nilgiri tahr, a species of mountain ungulate, a wild sheep-goat of the subfamily Caprinae, and estimate their population in the Anamalai Tiger Reserve.

In India, the term mountain ungulate often invokes flamboyant images of species like ibex (Capra sibirica) or markhor (Capra falconeri) standing on steep, high Himalayan cliffs. But, there is also the Nilgiri tahr (Nilgiritragus hylocrius), a mountain monarch in its own right. This often overlooked species lives in the mountains of the Western Ghats, a global biodiversity hotspot in tropical southwest India.

Nilgiri tahrs are genetically more closely related to sheep and tend to be stocky with short, coarse fur and bristly manes (in males). Their link to sheep is perhaps substantiated by the fact that they primarily are grazers feeding almost exclusively on grasses and herbs. Males are larger than females, have thick horns and a darker color when mature. Females and immature males are an overall yellowish-brown to grey, with underparts that are paler, and horns that are thinner. 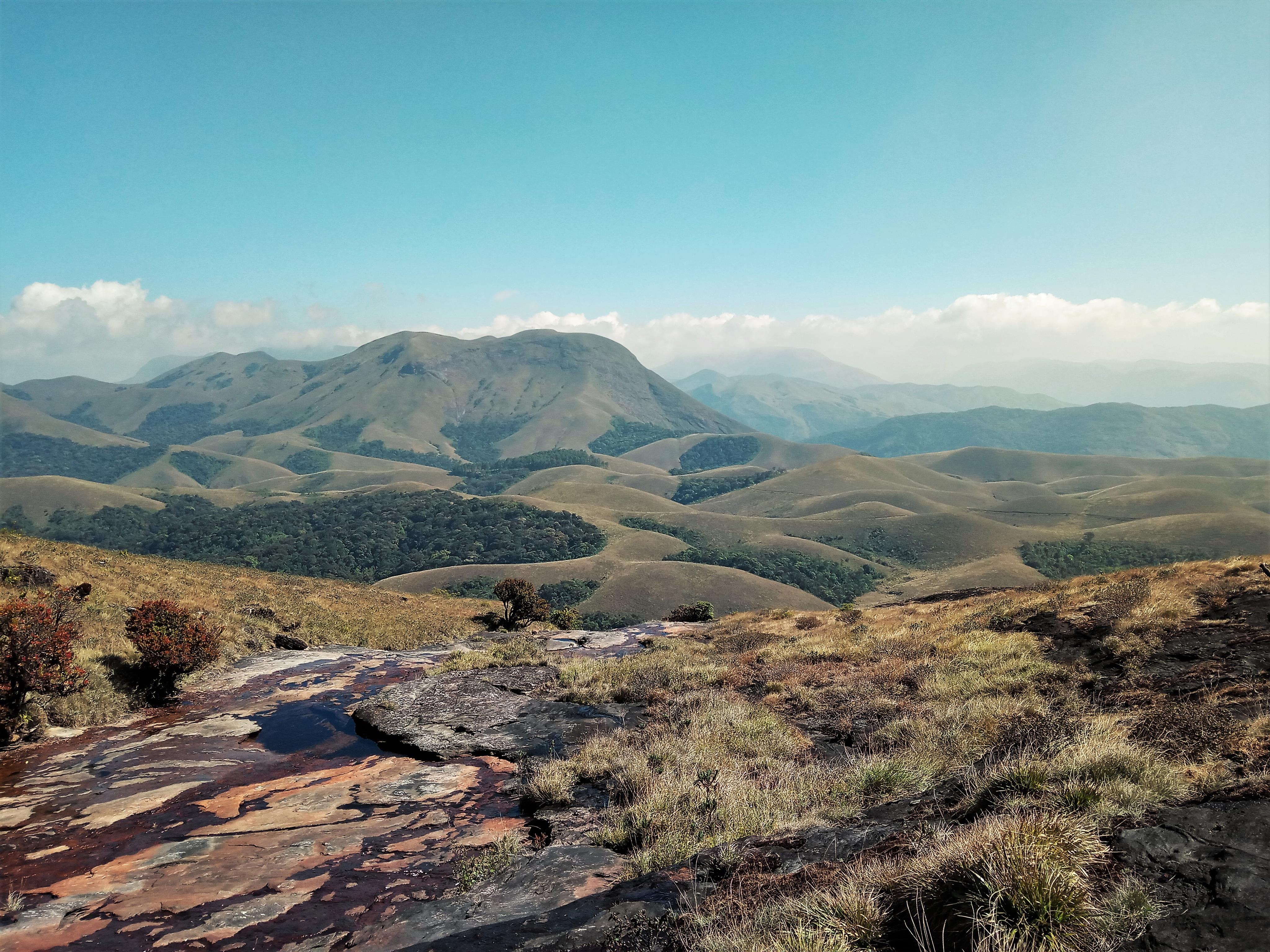 The Anaimalai Hills, a unique mosaic of grasslands interspaced with lush tropical forests, is a key habitat for the Nilgiri tahr. Photo: Abhishekgopal1993 CC BY-SA 4.0 The Nilgiri tahr is a unique mountain goat that lives in the montane grasslands of Tamil Nadu and Kerala. In Tamil, it is known as “varaiaadu” which is derived from “wurrai” and “addu”, meaning “precipice” and “goat” respectively; it is called the “varyaadu” in Malayalam. Photo: Akshay Manwani

Wild ungulates such as the Nilgiri tahr play an important role in maintaining ecosystem structure, and are also determinants of predator populations. Endemic to the states of Tamil Nadu and Kerala in southern India, Nilgiri tahrs are restricted to patches of montane grasslands, an ecosystem found largely on tops of the various forested mountains and hills of this region. Unlike the mighty Himalayas these mountains are much lower in elevation, and do not form long ranges. Rather, they are a patchwork of peaks interspaced with forested plains and human-use landscapes. Due to their elevation, these grasslands only function under fairly unique climatic conditions, and are rather vulnerable to climate perturbations.

Several threats affect this species over many parts of its restricted range, including habitat loss and disturbances caused by invasive species, and in some cases livestock grazing, poaching, and fragmentation of the landscape. As a result of its small range, specific habitat needs, and persistent threats, the global population of Nilgiri tahrs is estimated to be only around 2,000–3,000. A key site for the survival of Nilgiri tahrs is the Anamalai Tiger Reserve, within the Anaimalai Hills in Tamil Nadu, which is said to harbour the second-largest population of the species after the Eravikulam National Park in Kerala. 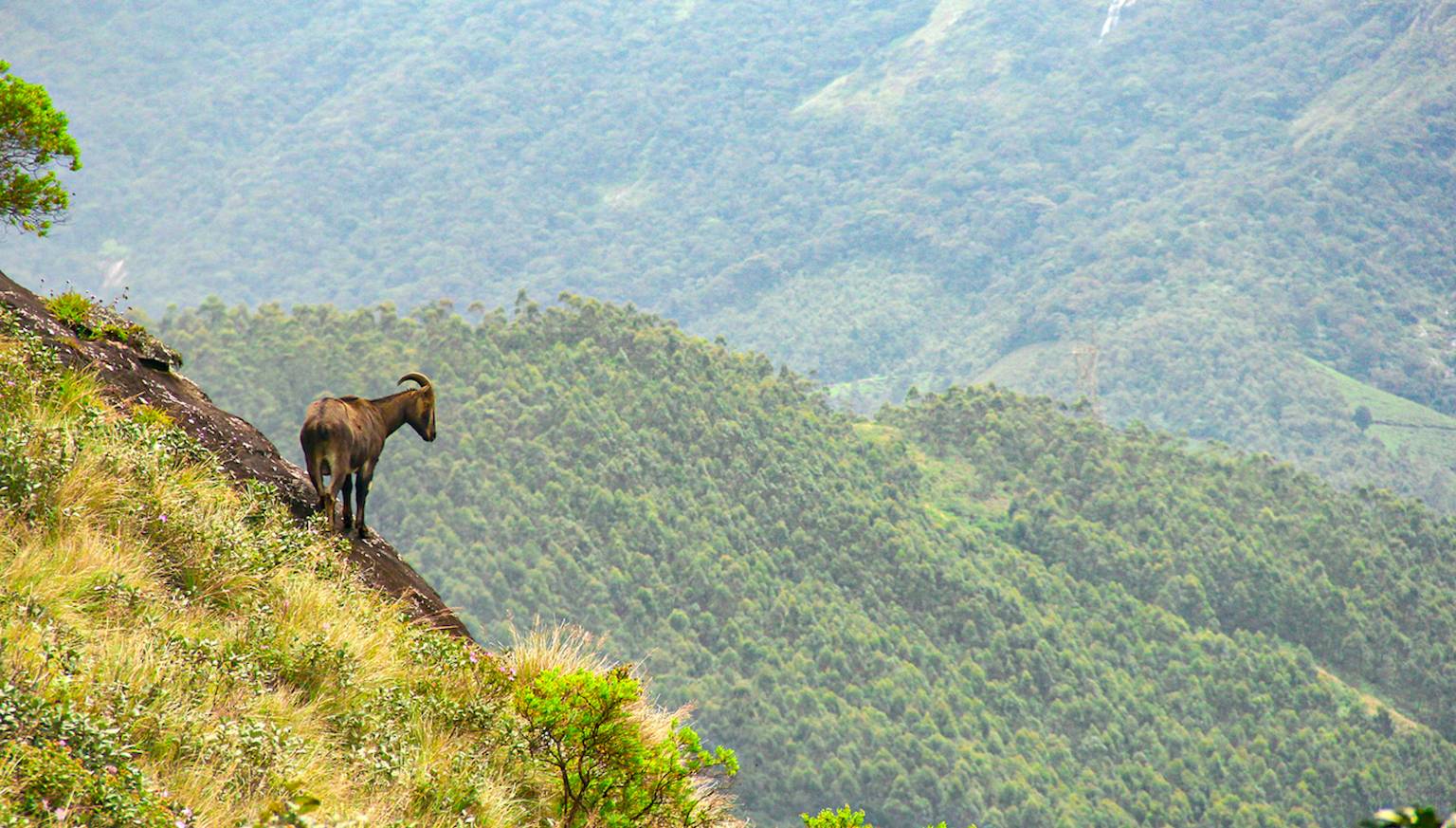 An adult male tahr can weigh up to 80-100 kg and grow up to 100 cm tall at the shoulder. Adult males often develop a light grey “saddle” area on their backs and are therefore are also known as "saddlebacks". Photo: Vedansh Pandey

Anamalai Tiger Reserve lies across a vast 1,480 sq km mosaic of forest, grasslands, and areas used by people mainly for livestock grazing and agriculture. We first identified potential sites used by Nilgiri tahrs from published studies and reports by knowledgeable forest staff and researchers from the region. We then divided each of the reserve’s ranges into 36 relatively separate grassland blocks encompassing nearly 50 different peaks. Following a training workshop for 45 officers and field staff of the reserve, we walked 257 km of survey transects, collaboratively, to complete this study.

Having worked with mountain ungulates for nearly five years in the highs Himalayas meant wading through knee-deep snow and climbing to elevations across stretches of barren landscapes, that left you gasping for air. Despite this, nothing prepared me and several teams member whose primary work was also based in the Himalayas, for the long treks through thick rainforests to reach the grassland peaks. While in the Himalayas the terrain and cold remain a perpetual cause of concern, here even the faintest trumpeting of a distant elephant or a faded pugmark of a patrolling tiger were enough to send shivers down our spines. It is fair to say the surveys could only have been done because of the expert advice and comfort provided to us by the local forest staff and assistants who have navigated a way of life in these landscapes for generations. Their experience and knowledge provided us with key insights that ensured we employed all survey methods robustly while also staying safe. Collaboration can truly facilitate creation and ensure completion of tasks.

Found in mixed groups, whose health is indicated by the number of young, Nilgiri tahr is a gregarious species. The author’s study in the Anaimalais found seven males for every ten females. Photo: Ganesh Gorai/Shutterstock

Our study estimated the Nilgiri tahr population in the Anamalai Tiger Reserve to be 510 individuals in 35 groups. This accounts for between 20-25 per cent of the global population of the Nilgiri tahrs. Our estimate is similar to a few previous studies from a couple of decades ago, suggesting the populations have remained largely stable. However, seemingly satisfying this finding is, it has a bit more nuance to it. It was puzzling, that several of the peaks we surveyed had none or few tahrs. The main concentration of tahrs was in Grass Hills National Park and on Pachapal Malai peak which were found in roughly the center of the entire region. The reasons for this fragmentation and concentration are unknown and merit further research.

The magic of seeing over a 100 Nilgiri tahrs on a single peak in Grass Hills at the very start of our survey was quickly diluted by several days and peaks devoid of their presence over the next few weeks. Were the tahrs hiding in the dense adjacent forests or has the mass increase in surrounding infrastructure fragmented their already naturally limited habitat resulting in them concentrating in the few remaining refugees? Each one of us had our creative reasoning behind these observations. Often on being sighted tahrs were extremely skittish, and would flee to inaccessible terrain in the crags above the grazing meadows. This made us wonder if they were being hunted for meat and considered humans one of their other predators besides common leopards (Panthera pardus), dhole (Cuon alpinus), and tigers (Panthera tigris).

In Valparai, tahrs have become habituated to human presence largely due to feeding by people. Not only does this lead to health problems for Nilgiri tahrs, but can also lead to incidents of roadkill. Photo: Vijay Karthick CC BY-SA 4.0

As my team and I approached one of several anti-poaching camps within the Anamalai Tiger Reserve, having completed the very last peak of surveys, I could sense a feeling of accomplishment and hope in the air. As we silently ate that night’s meal under a sky of a thousand glistening stars and the sounds of the croaking frogs, we hoped that our work would provide a valuable baseline for the management of the Anamalai Tiger Reserve, to understand the status of this rather under studied species. We hoped that every 3-5 years perhaps this exercise could be repeated to monitor trends in Nilgiri tahr populations. Such an approach would provide a better understanding of Nilgiri tahr populations and help conservationists identify areas to focus their actions. And conservation is imperative if we are to ensure that the unsung Nilgiri tahr, the symbol of Western Ghats montane grasslands, roams its expanses unhindered. 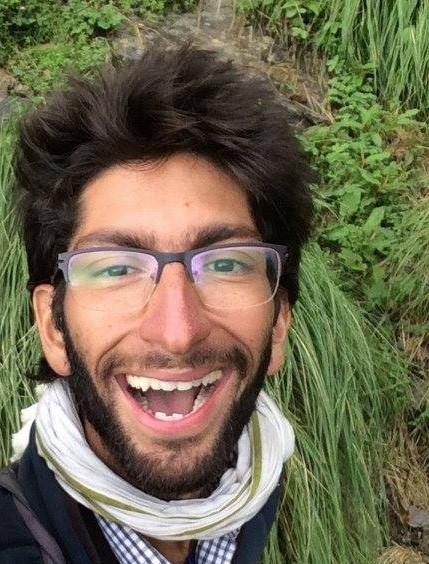 is a PhD student with the International Center of Conservation Science at Oxford University and Nature Conservation Foundation-India working on improving disease management.