Clouds, Hills, and Sightings of the Nilgiri Tahr

Found exclusively in South India, the Nilgiri tahr inhabits rocky hillsides and grasslands of the Western Ghats, but for how long? 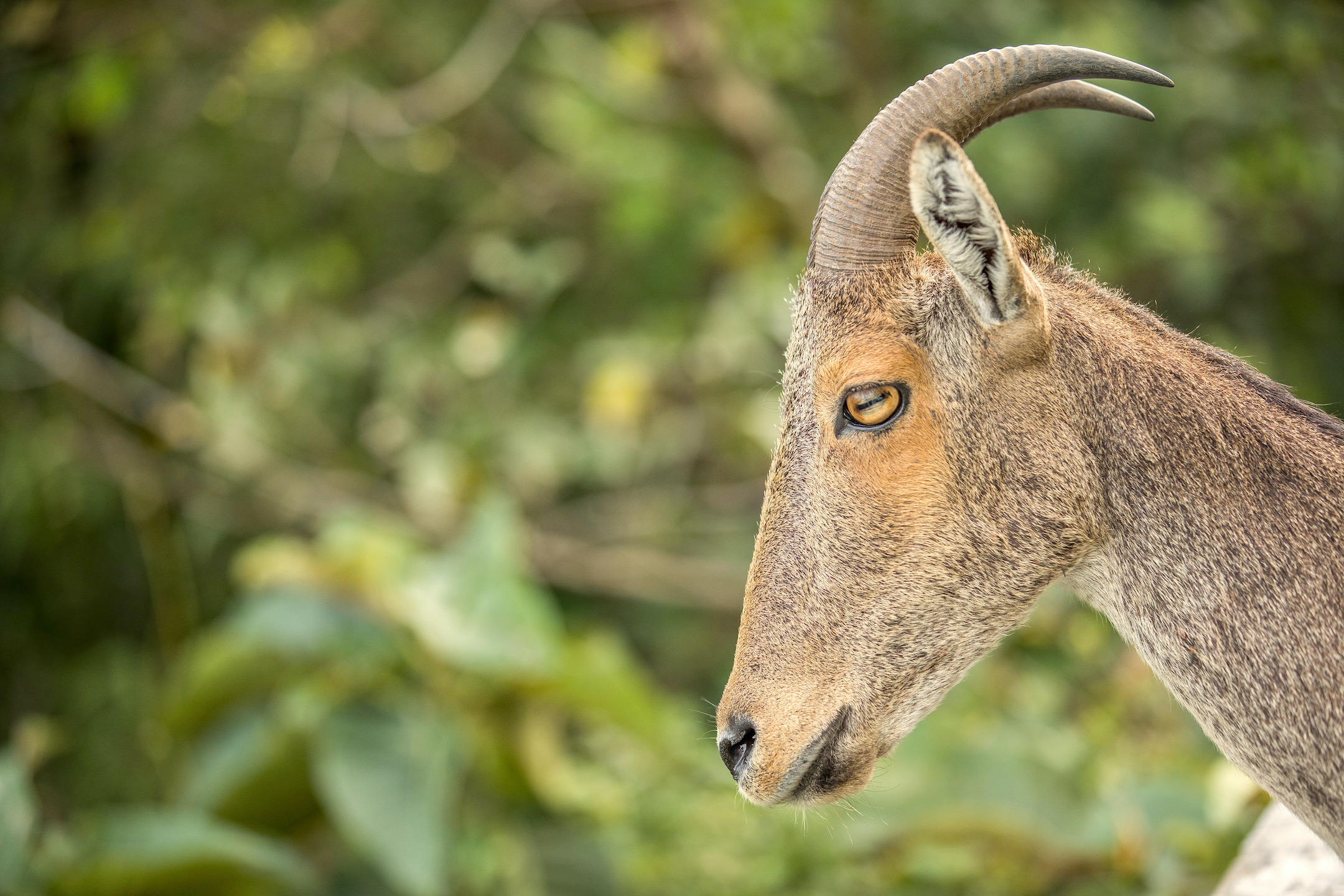 I was standing in a cloud, my feet amidst soft whiteness, like the kiss of a butterfly wing. The grey-white mist crept between my fingers, weaving in and out as the peak of Anamudi mountain played peekaboo with me. I was in Eravikulam National Park in Munnar, Kerala, at a height of 2,000 metres. There is generally a coolness to the air here, but it was colder that day, due to the descending water vapour. Water droplets clung to my lashes and I had to blink constantly to see through the mist.

Spread over barely 100 sq. km, Eravikulam National Park is a stretch of rolling hills and plateaus, home to Anamudi, the highest Indian peak, south of the Himalayas. It is a lush landscape of grasslands interspersed with shola forests, typical to the Western Ghats. Perennial streams flow through the region, eventually becoming the tributaries of the Periyar River. 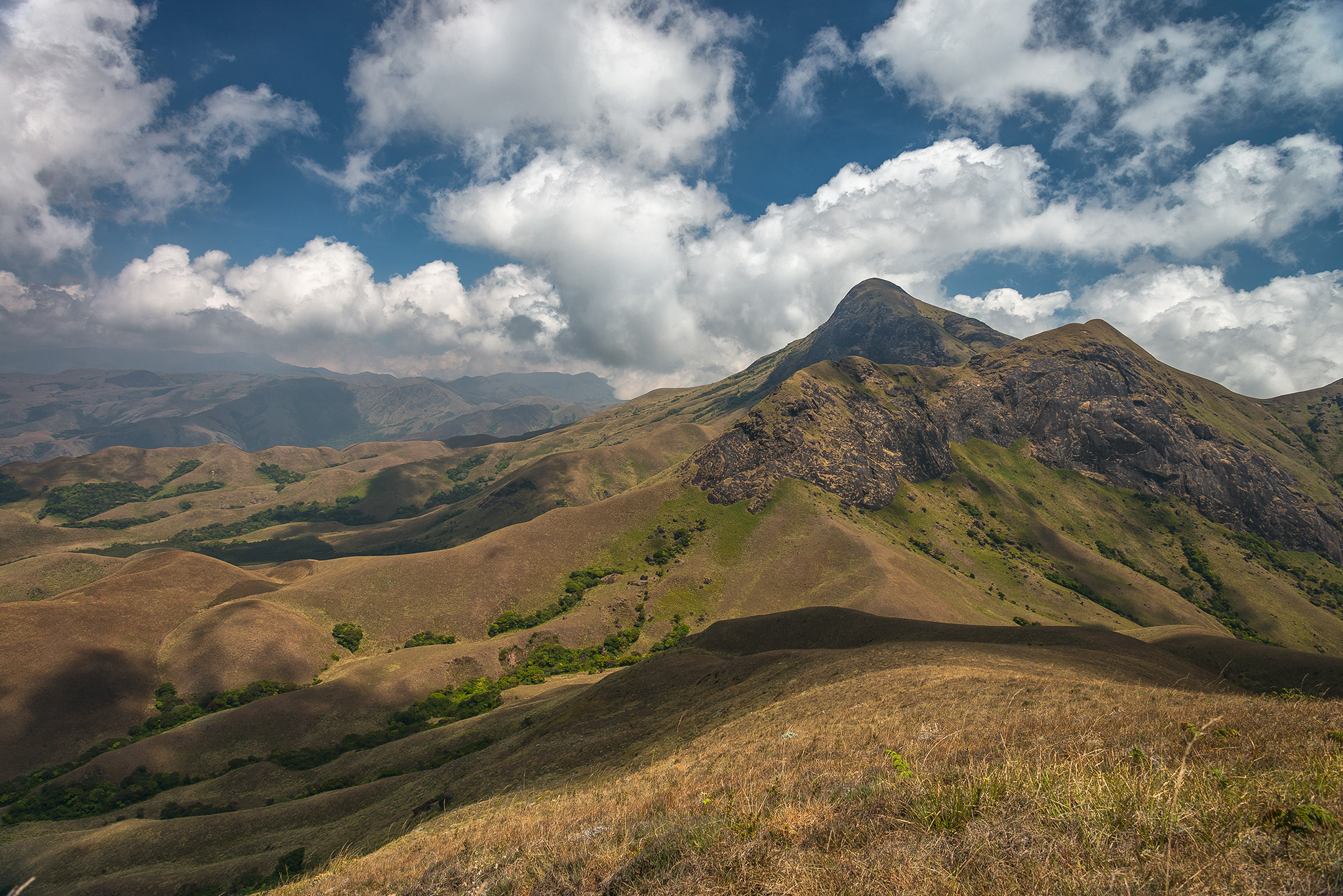 Kerala’s Anamudi Peak (2,695 m) is among the tallest peaks in southern India, and hosts a wealth of mammalian diversity, including elephants, gaur, and Nilgiri tahr. Photo: DMdmadhu CC BY-SA 4.0 The Nilgiri tahr (Nilgiritragus hylocrius) found in Kerala and Tamil Nadu, is a close relative of the Himalayan tahr, It is “more or less confined to altitudes of 1,200 to 2,600 meters,” according to the IUCN. This image was taken in Valparai, inside the Anamalai Tiger reserve near Coimbatore. Cover Photo: Akshay Manwani

I was in Eravikulam for a story on the Nilgiri tahr (Nilgiritragus hylocrius), a species of mountain goat that is endemic to this region, meaning it naturally occurs only in the Nilgiri hills and southern parts of the Western Ghats. Classified as Endangered on the IUCN red list, the Nilgiri tahr was once a hunting favourite whose numbers have crashed due to loss of habitat and killing for food. Today, the park holds about 800 individuals and, there are perhaps a few thousand animals in the Western Ghats overall.
It is not unusual to see a few loitering on the streets in Munnar, and in neighbouring Tamil Nadu, where it is called varrai-addu. This translates to “goat of the precipice” though the tahr is more closely related to sheep than the goat family.

On these hills and plateaus, rain or at least a drizzly mist, is always a possibility and visibility can shrink in seconds when the clouds roll in. It can also clear just as quickly. I walked slowly, to avoid tripping or falling into the streams that burbled through the grasslands. It was an interesting experience, as I had some visibility at eye-level but my feet were completely obscured. I felt like I had a special dispensation to walk in heaven.

There was muffled bird song around me, accompanied by the call of insects and the soft stirring of wings as birds flitted and landed. Grasslands are extremely effective sequesters of carbon and a key watershed as they store a lot of water, which they release slowly in the drier season. They are also biodiverse, and have hundreds of birds and small mammals living, nesting, and burrowing in them.

The Nilgiri tahr is the state animal of Tamil Nadu, though populations in the region are also falling. According to IUCN, one reason for this is competition for food resources from domestic livestock, which also graze on hillsides inhabited by the tahr. The spread of invasive species, which are not consumed by the tahr, is another contributing factor. Photo: Rudra Pratap Singh

My guide, a local man, carefully walked me towards an area where a group of tahr had been observed congregating earlier in the day. Tahr are mostly active early in the morning and late afternoon, and spend their days, sheltered in the shadow of rocky ledges and hillsides. We walked slowly and softly, to avoid spooking them and soon, we reached a small rise with a flat plain spread in front of it.

Here, through the vanishing mist and strong sunlight, I saw a group of tahr. They were quite spectacular to look at, both males and females, with their soft brown coats, eerie (almost protuberant) eyes, and their strong, stocky bodies. The males are bigger than the females and every herd usually has one big, dominant male who has a run of the females. This group had about six females and the one male, a magnificent silver saddleback, desperately trying to romance a female. A saddleback is a light grey patch of hide that develops on the backs of adults, and shines silver in the sunlight. Males usually develop this when they reach sexual maturity, which is between 6-8 years. Females become sexually mature at about 16-18 months.

Both male and the female tahr have curved horns on their head, though males have slightly larger horns. The amorous male I was watching did not seem to be having much luck with the female he was chasing, who seemed more interested in grazing. Nilgiri tahr eat the grass and shrubs of their home range. While they eat, their hooves move and aerate soil, and their excreta adds fertilizer and spreads seeds.

Like humans, the Nilgiri tahr is diurnal by nature, meaning they are active in the day. The animals spend early mornings and late afternoons grazing on grass and other shrubs, occasionally sauntering into areas of human habitation in search of food. Photo: Akshay Manwani

Since they are strictly grazers and not big browsers (animals that eat leaves from the tops of bushes), vanishing grasslands are a major problem. The population of the Nilgiri tahr was decimated due to historic exploitation of the ghats for timber, the clearing of vegetation to make way for hunting estates and later, coffee, tea, and spice plantations — until there were less than a 100 left in the beginning of the 20th century. With concerted conservation effects and the creation of protected areas, their numbers have since grown. It’s still not at a satisfactory level, as the animal is still endangered, but it is better than it was.

Female tahr generally congregate in groups, while dominant males are mostly solitary in nature. Younger “bachelor” males form loose coalitions during mating season to establish dominance and mate with sexually mature females. At this time of year, males fight each other, and try to mate with as many females as possible. Tahr can mate through the year, but peak birth time is in the winter. The females usually have one offspring each, and sometimes birth twice a year. The gestation period is about 170-180 days.

We kept our distance from the group, but they seemed quite unconcerned. Tahr are swift and almost impossible to catch once they reach the rocky slope. This is why their predators in the wild — tigers, leopards, and wild dogs — try to ambush them when they are grazing on flat, open plains. However, there’s usually a sentinel tahr who keeps a watch for predators, and lets out a distinct, high-pitched call when alarmed.

Due to increasing infrastructure in the Western Ghats, species like the Nilgiri tahr have to navigate road crossings (left) and rash drivers, even within protected areas like the Anamalai Tiger Reserve, where this image was taken; With the increase in logistical development, comes heightened contact with humans, which causes disturbance to the animal on most occasions (right). Photo: Akshay Manwani (left), Vedansh Pandey (right)

For species like the Nilgiri tahr, habitat protection and restoration are the most crucial conservation tools. In places like Anaimalai and Valparai, I have seen them on the highway eating plastic and other rubbish strewn around or fed by tourists. Tarred roads and railway lines further fragment their habitat, scattering herds and bringing more people into wild spaces.

Back with the group, the male had no success with the female he was wooing. The clouds started to build again, and the sunlight slowly shrank away. As the mist thickened, the tahr vanished one by one, reduced to outlines by the cloak of grey. I walked away, holding on to the hope that these hills will remain home to this special goat that is more of a sheep.