Bewitching Blennies: Pixies of the Seas

Blennies are small, cute fish that are essential to the functioning of coral reef ecosystems. Being abundant and quick to reproduce, they are an important food source for predators. 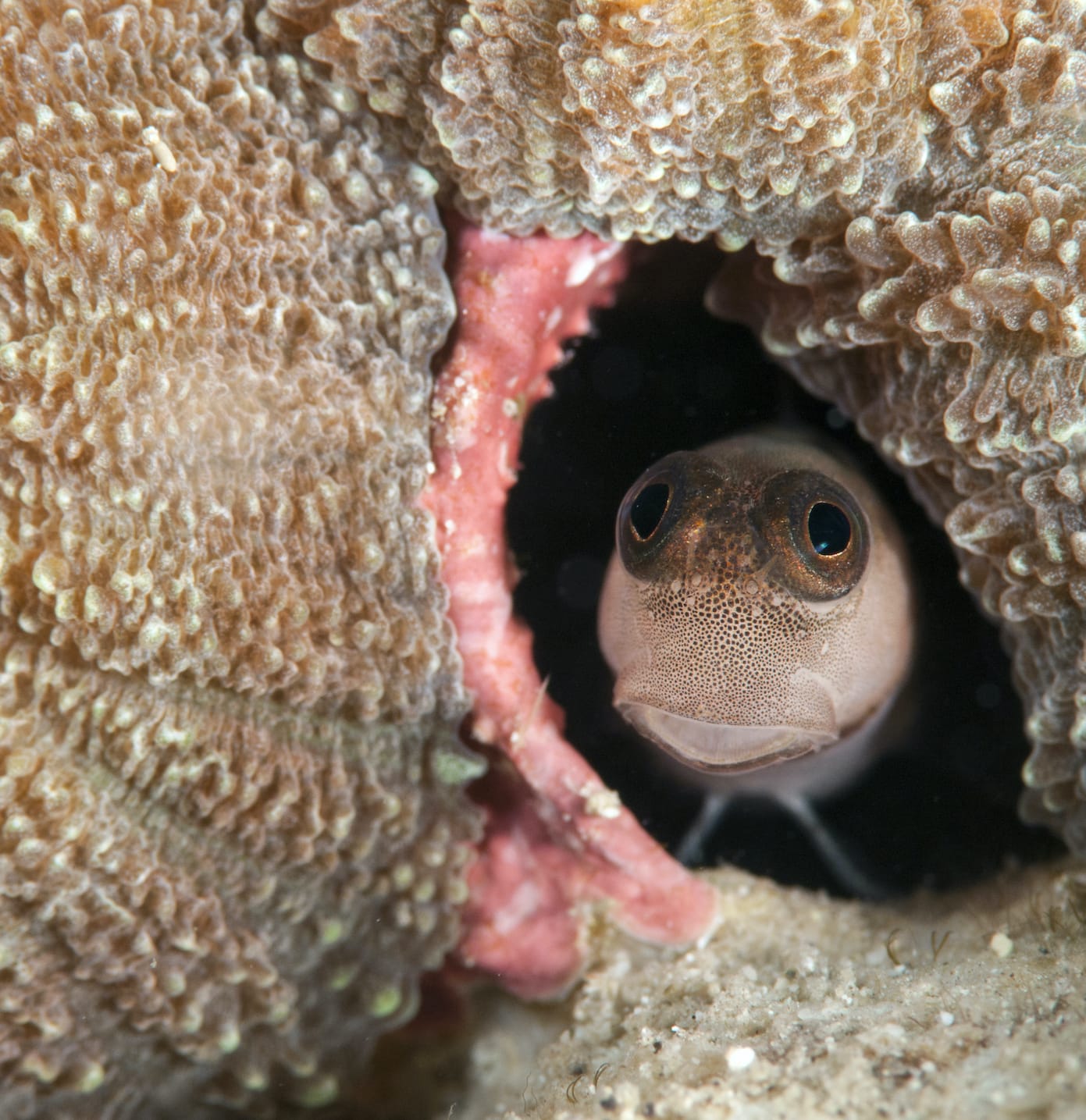 It was the bicolour blenny that truly challenged my dive skills and composure underwater. It was an extraordinary, small fish that looked like mango candy with eyes.

To me it was love at first sight. The kind of love that lasts a lifetime, that deepens after every encounter with one of these doe-eyed sweet peas. Even though blennies are wild fish that live in the big blue ocean, they will instantly melt you with a love that urges you to put them in your pocket and take them home. Sadly, that does happen. Blennies have made their way into the wildlife pet trade. If you run a google search about blennies in the interest of learning more about them, your first results will most likely teach you about good substrates for blennies in your aquarium, suggested tank mates for each species, or nutrient supplements that will boost their growth rates in captivity. 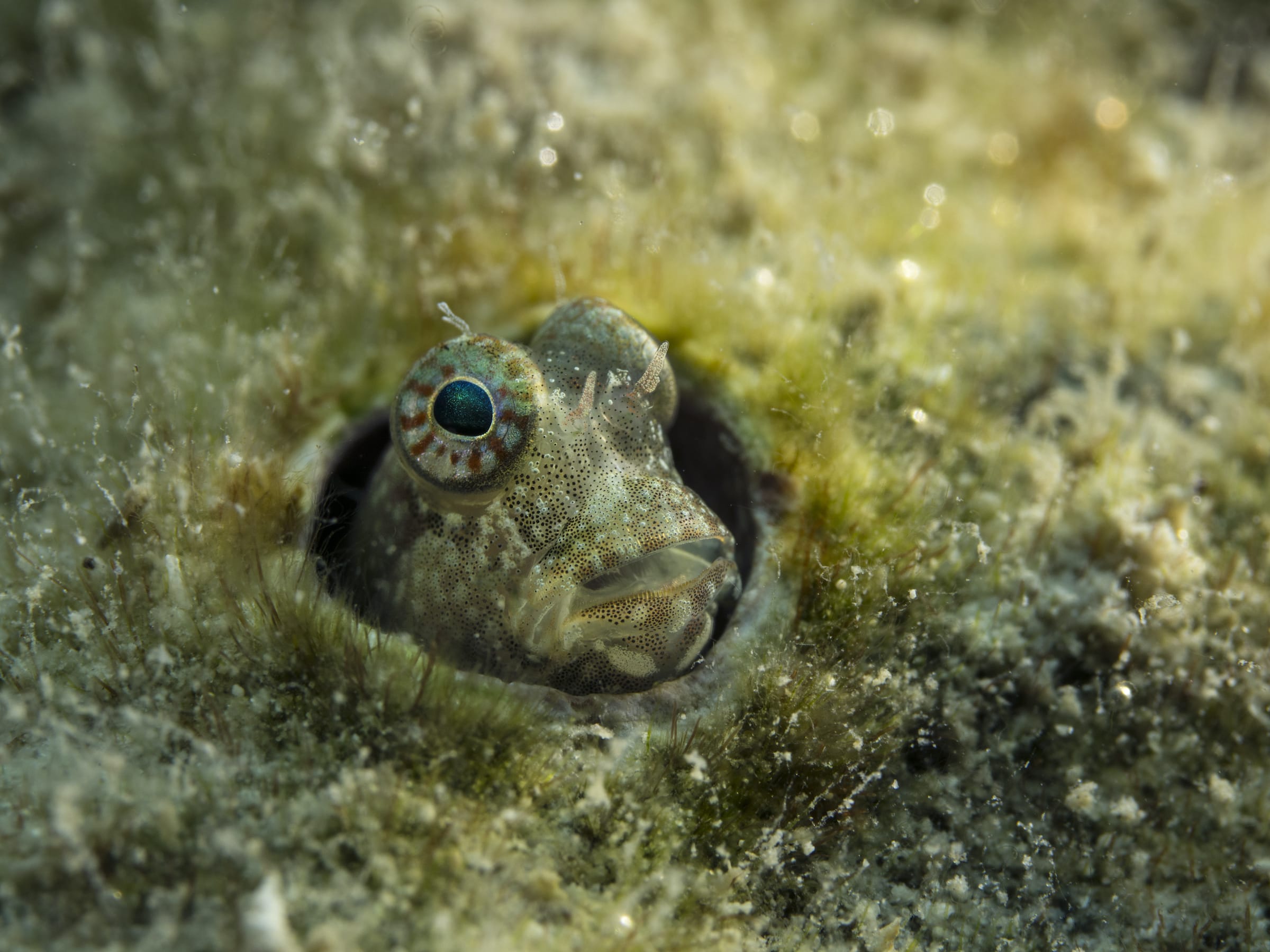 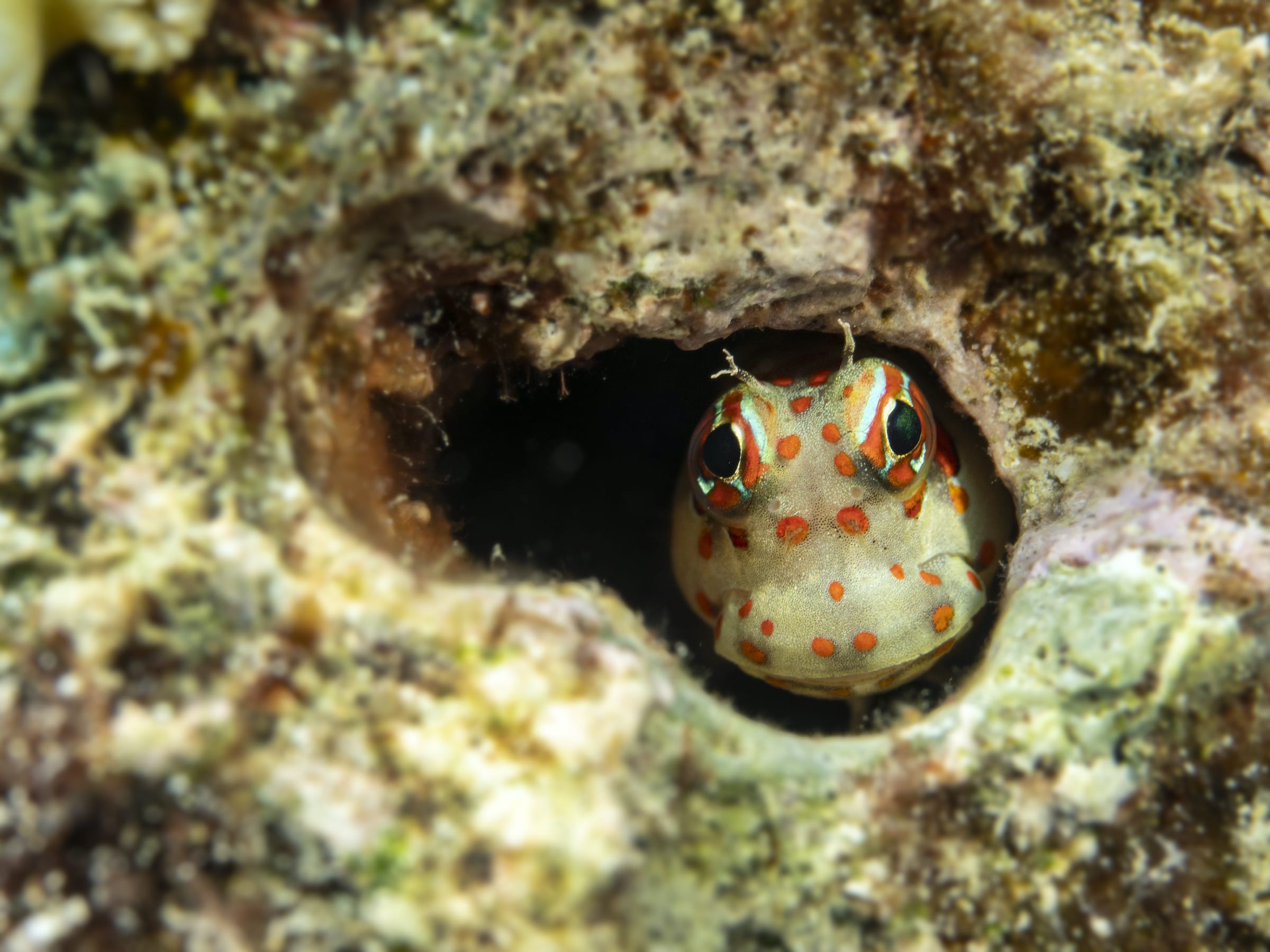 Blennies spend a lot of time in their burrows and seem to invest a lot of their decorative effort to impress their mates on the body part that gets most exposure — the head. From polka-dotted and honey-combed faces to patterned eyes and bearded lips, blennies have it all. The appendage that shows most extravagance is the fleshy protrusion right behind the eyes — the cirri. They can be branched, bunched, tufted, smooth or pointed.
Photos: Umeed Mistry

Blennies rarely feature in people’s “must-see” lists of fish. There may be some ocean-goers who are learning about blennies for the first time, or others who would rather spend time with a beastly barracuda than with a fish finger-sized blenny! This could be because blennies are not the easiest to observe up close, at first. Their striking colours become cryptic against the backdrop of a vibrant coral reef. When you do see them, they often come across as shy and constantly suspicious of you. But they have every reason to be. A blenny perched on a coral boulder is an easy-to-target meal for practically every known predator on a reef. Yet they lead very social lives. Constantly foraging, fighting one another over mates, and when the time comes, some go to the extent of guarding their unhatched offspring like doting parents. All we have to do is take the time to earn their trust.

Think of blennies as hobbits of the coral reef ecosystem. Their shire is situated within the crevices of rocky boulders, their homes often made from repurposed tubes left vacant by boring and drilling organisms such as polychaete worms. Despite their nervous and skittish disposition, blennies will readily make eye contact with you, greeting you with a warm “hello there” from the safe confines of their hobbit-holes. 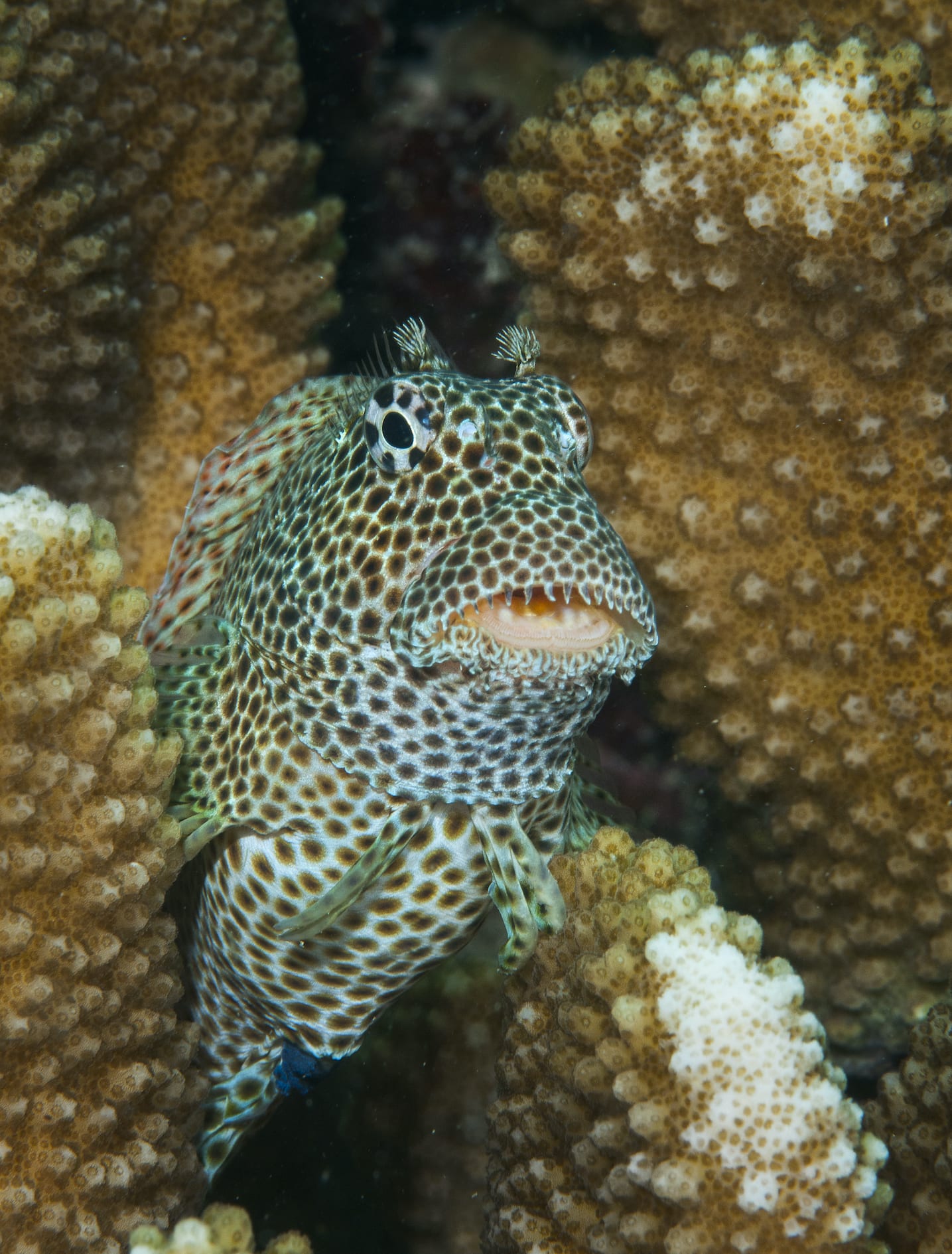 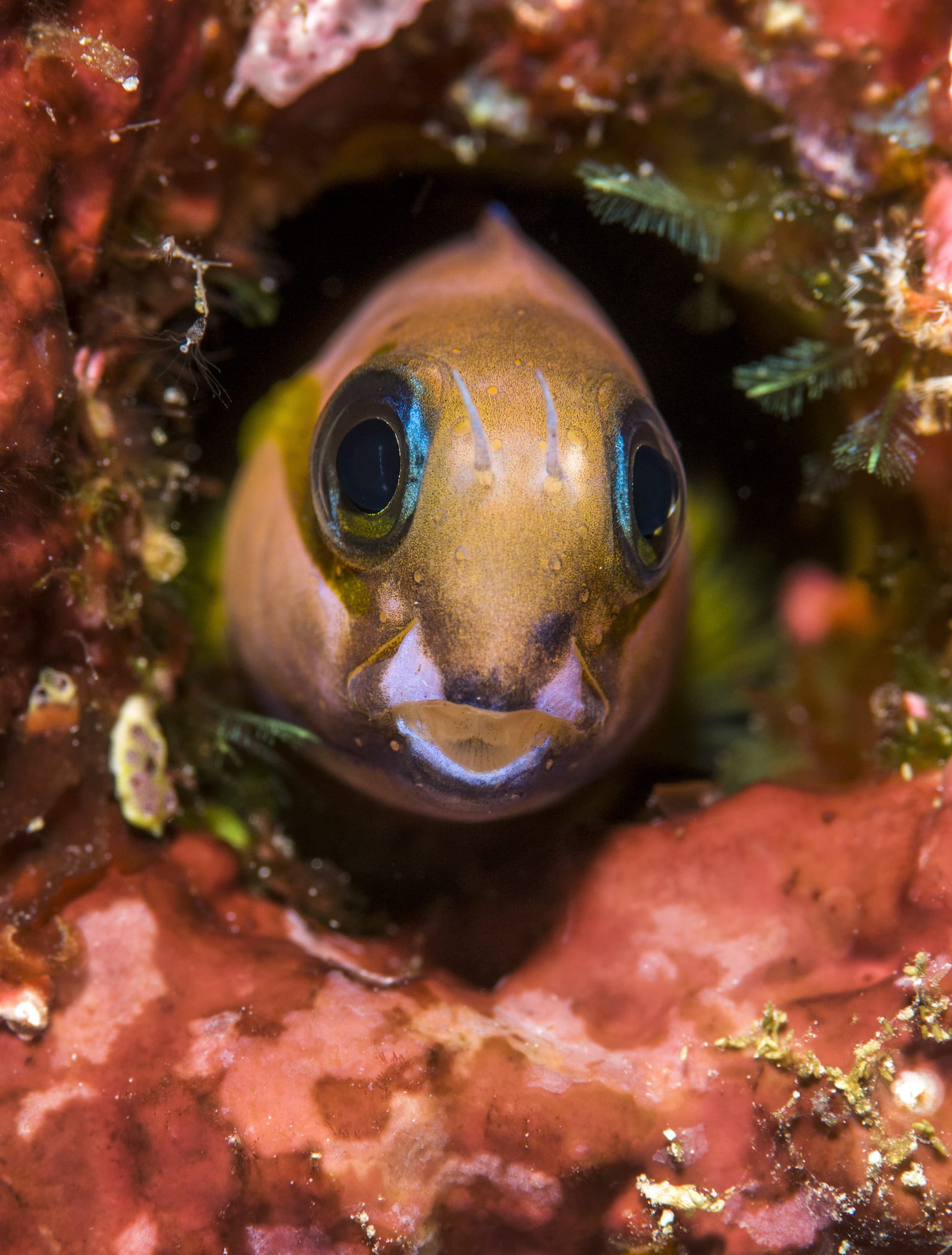 (Left) The leopard blenny (Exallias brevis) is a goofy giant among blennies, growing up to 14 cm long. This species is unique in its diet, feeding exclusively on coral, leaving behind bleached patches as evidence. (Right) A midas coralblenny (Escenius midas) displaying its photogenic face from a burrow. Midas blennies do spend a substantial amount of time swimming in the water column, feeding on plankton, mimicking other plankton-feeding families like the Anthias for safety.
Photos: Umeed Mistry

A blenny feeding will look like a lawnmower in action, aggressively and adorably consuming microalgae, foraminiferans (single-celled shelled protists) and detritus on the reef. Some other species have a wider range of tastes that would usually include small crustaceans, sponges, worms, and molluscs. Of the 340-odd species in the family Blenniidae, there are some species like the bluestriped fangblenny (Plagiotremus rhinorhynchos) that have pushed the boundaries of blenny evolution. Having evolved a taste for fish, these fangblennies leave the safety of their burrows on the reef and venture out into the blue, with all the adaptive machinery required to do so.

Fangblennies must be able to get close enough to a fish to pinch off bits of its skin, scales or flesh without raising suspicion. In order to do so, as juveniles the bluestriped fangblenny has evolved to uncannily resemble the juvenile of a bluestreak cleaner wrasse, in appearance and behaviour. The benefit of this mimicry is that unsuspecting fish will gladly lend themselves to a fangblenny expecting a clean removal of parasites from its body. Instead they will leave with a snip or more of their body missing. In addition to having curved canines for severing flesh, fangblennies can inject opium-like venom to reduce its victim’s blood pressure and dull the pain of the bite, giving the blenny enough time to flee the scene of attack, unnoticed and unsuspected.

(Top) A bluestriped fangblenny juvenile has found itself a hole safely fortified by a fence made of algae and stinging hydroids. When not blushing, this fangblenny is known to impersonate cleaner wrasses and bite small chunks out of passing fish who get tricked into thinking they were being offered a clean. (Above) The bicolour coralblenny (Ecsenius bicolor) that lovingly introduced me to the world of blennies. This species is easy to identify and observe, typically perched like a textbook blenny with a gentle curve in its body.
Photos: Umeed Mistry (top), Chetana Babburjung Purushotham (above)

As it turns out, in addition to having a very high cuteness quotient, blennies are also extremely valuable in the functioning of coral reef ecosystems. Blennies along with gobies and cardinalfishes are “cryptobenthic” bottom-dwelling fishes that constitute a staggering 60 per cent of all fish eaten on coral reefs. This supply of food for predators does not seem to run out despite the demand. Blennies and others like it are by nature tremendously abundant, quick to reproduce, swift to recruit back into the population, and rapidly consumed. Essentially these “Thumbelinas” are an easily replenished fast food that coral reefs just cannot do without.