Orb-weaver spiders are functional design enthusiasts and imaginative decorators, creating a variety of webs that range from minimalist to ornate — all are highly effective insect traps 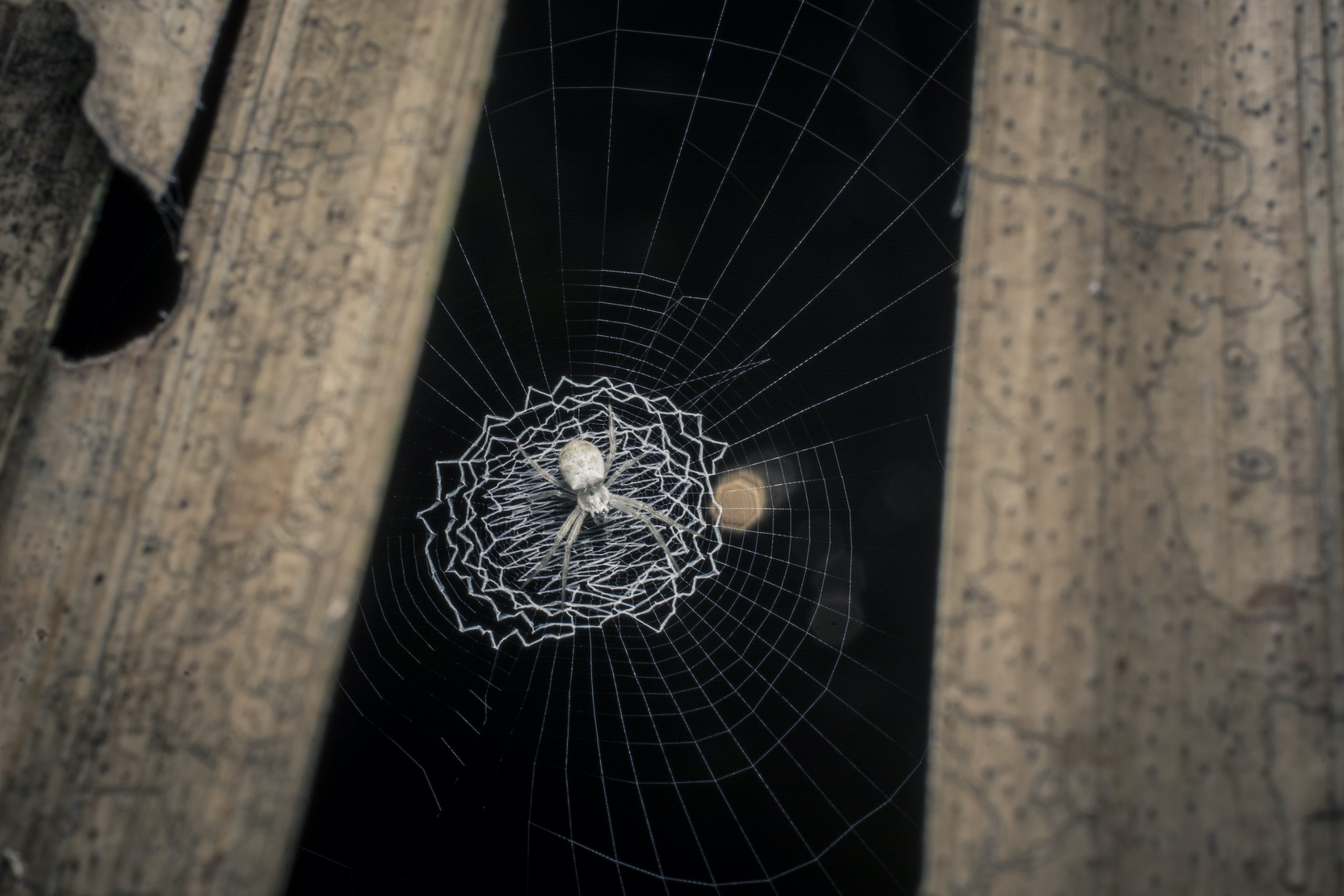 There’s something innately mesmerizing about an orb-web built by a spider. Whether you encounter the ephemeral web of a garden orb-weaver spider around your home or the glittering brilliance of one built by a golden orb-weaver in the forest, they are all captivating. It is hard to imagine how such an elegantly complex natural structure has evolved.

A Uloborid sits still on her cribellate web as a new batch of hatchlings explore their mother’s orb web. Photo: Samuel John
Cover photo: An Argiope sits on an intricately designed stabilimentum on its web. Stabilimentum are decorative silk structures built by some spiders like the Argiope. Photo: Samuel John

Three-dimensional Predecessor or Successor?
Spiders in the Araneidae family are distributed everywhere from home gardens to evergreen forests. Their common name “orb-weavers” comes from their penchant for building the popular two-dimensional orb-web. Like any scientific family, there are rebels like the genus Cyrtophora that weave in three dimensions. Spiders in this genus weave a horizontal non-sticky web that also contains radials and spirals. However, the resemblance to an “orb-web” ends there. The centre of this web is anchored upwards and resembles a circus tent, earning it the common name “tent-web spider”. The tent is covered above and below with a dense cover of irregular web structures. These irregular webs on either side of the tent make escape virtually impossible for prey falling onto the surface of the tent.

The tent-web has long been considered a predecessor of the two-dimensional orb-web. However, a thorough analysis of the private parts of Cyrtophora spiders led scientists to believe that this specialised 3-D enthusiast likely evolved from orb-weavers. This “chicken or egg” style debate continues as we learn more about our eight-legged neighbours. What is evident though is that orb-webs and their architects have continued to evolve with modifications and adaptations over many millions of years. In this quantum of evolutionary time weavers have become very creative with their sense of design. 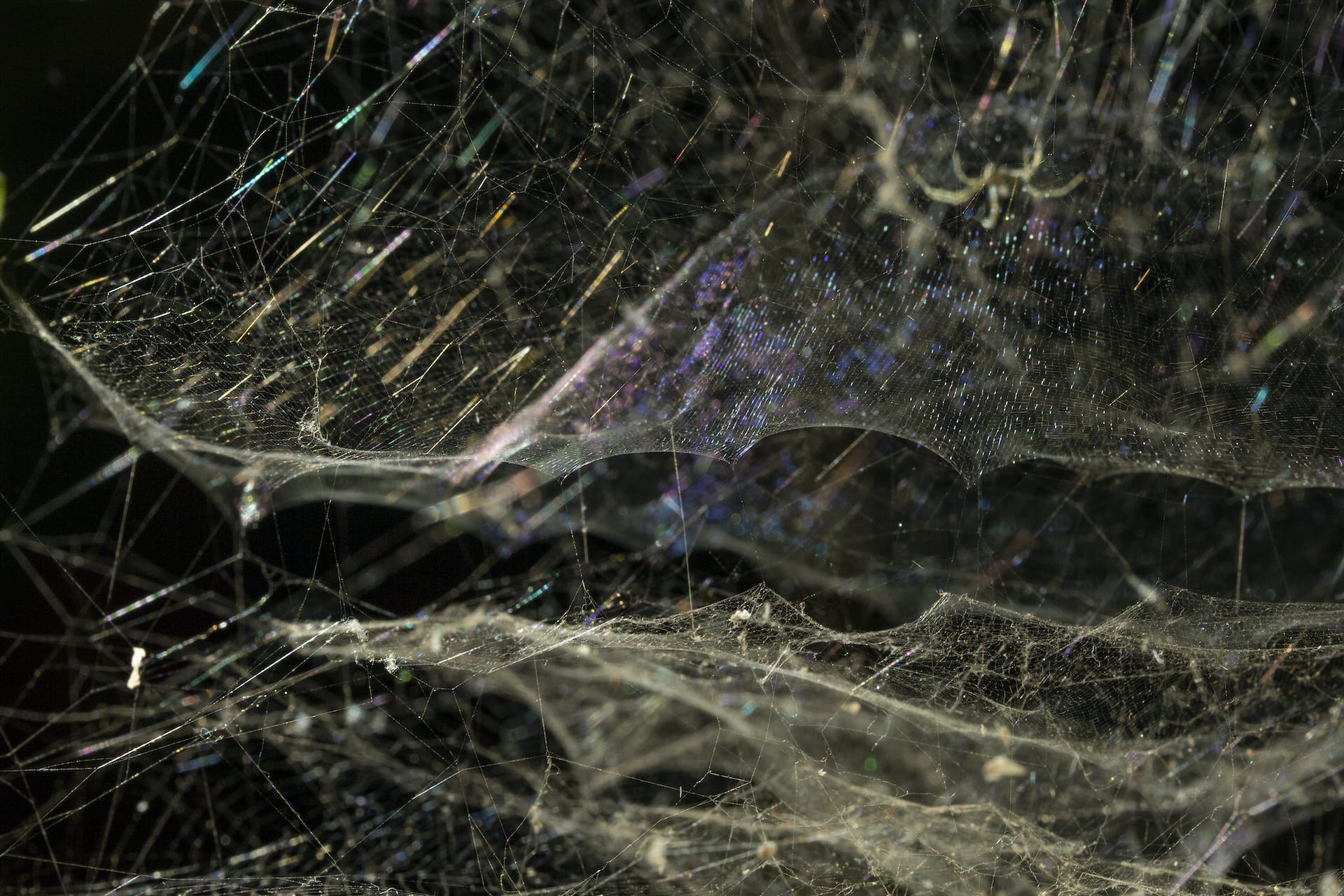 A Cyrtophora sp. in its tent web. Tent-webs were widely considered predecessors of the two-dimensional orb-web. Photo: Rajesh Sanap

The Interior Decorators
Many genera of orb-weaving spiders have evolved to decorate their webs with silk structures called “stabilimenta”. Spiders are functional design enthusiasts and consequently, each style of stabilimentum seems to serve a different purpose. Orb-weavers from the genus Argiope decorate their web with zig-zag lines that appear to be a defensive installation. When the spider comes under attack by aerial predators like wasps, the stabilimentum is thought to act as a distraction for the predator as the spider flees the scene. This added protection comes at a price as Argiopes with stabilimenta on their webs have been found to catch less prey than those without the decorative structure. On the flip side, spiders in the genus Cyclosa with a stabilimentum on their web had 150 per cent more success with catching prey than individuals whose webs lacked a stabilimentum.

Some species within the genus Cyclosa decorate their webs with a wide range of ornaments like body parts of prey, small bits of dried leaves, moulted skin, among other things. These imaginative decorators create a long line of debris that runs along the diameter of the web. When they sit crouched in the middle of this line, they are visually indistinguishable until closer inspection.

A debris orb-weaver sits in the middle of a line of decorations she has laid out on her web. The decorations consist mainly of leftovers from previous meals. Photo: Samuel John

Molecular Gastronomy
Ever wondered what makes a spider web so sticky? Spiders in the Araneidae and Tetragnathidae families dot their spirals with sticky glue droplets. The Uloboridae family, however, employs a slightly different approach to getting visitors to their webs to stick around for their next meal. Uloborid spiders produce an additional type of “cribellate” silk from a specialised organ called the “cribellum”. They have a number of adaptations to help them work with their woolly web embellishments. The fourth pair of legs on these spiders are modified with bristles called calamistrum that allow them to comb out fine strands of cribellate silk that act as a “catching wool”. This cribellate silk is about 10 nanometres thick. For some perspective, if a line of cribellate silk was as thick as a pen, then a single human hair (100,000 nanometres) would be as thick as a football field. At their microscopic levels of operation, the wool sticks onto most surfaces and objects thanks to van der Waals forces (weak molecular force) as well as the inherent hygroscopic forces present in spider webs. In addition to stickiness at a molecular level, cribellate silk is also known to form bonds with the wax found on many insects, making Uloborids highly effective insect trappers. 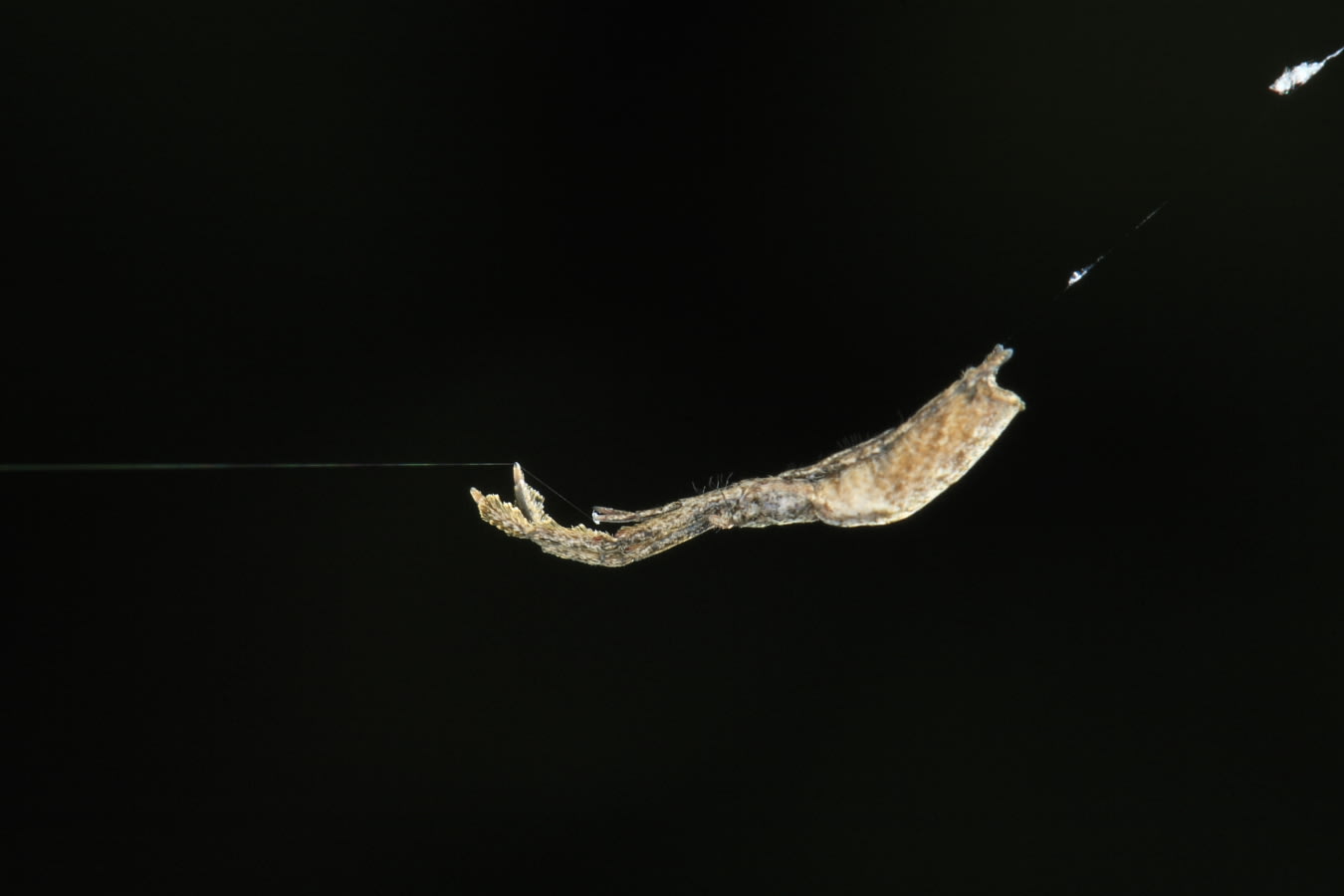 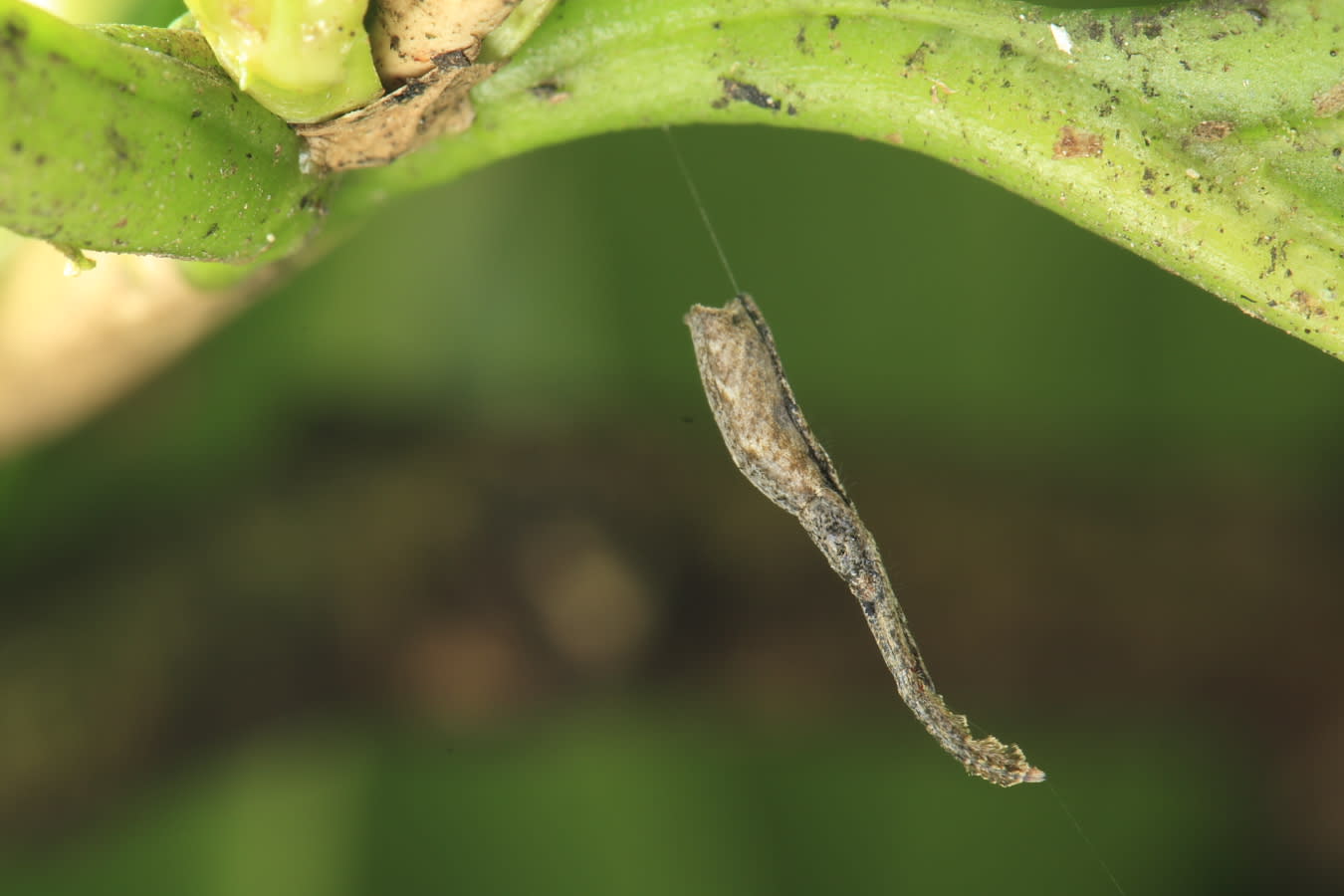 One-liners that stick and net connections
Within the Uloboridae family of cribellate orb-weavers, is a spider that epitomizes minimalism. Spiders in the genus Miagrammopes create a single-line of web to capture prey! The spider creates a capture thread that runs between two anchor points — often twigs, branches, and leaves. It then covers a majority of the centre of this thread with cribellate silk. The spider then waits patiently at the end of the capture line for unsuspecting insects to come in contact with the sticky tripwire. When an insect hits the capture thread, the spider responds to the vibrations by letting some slack into the line and then jerking it with its first pair of legs. These jerking movements create a delectable cocktail of varied inertia and wave motion. As the insect is whipped faster than the rest of the web, the slack in the web line creates loops that continue to wrap the sticky web around the insect.

The enigmatic net-casting spiders have been found to be descendants of orb-weaving spiders. This becomes evident when their “nets” are closely examined. They resemble the radials and spirals structures found in orb-webs and complete the net with a generous helping of cribellate silk to make their embrace extra sticky.