These tiny creatures have inspired design, art, and folklore. They manufacture all their own raw materials for knitting orb-shaped masterpieces of silk that are not just geometric and pretty but also very efficient at catching prey 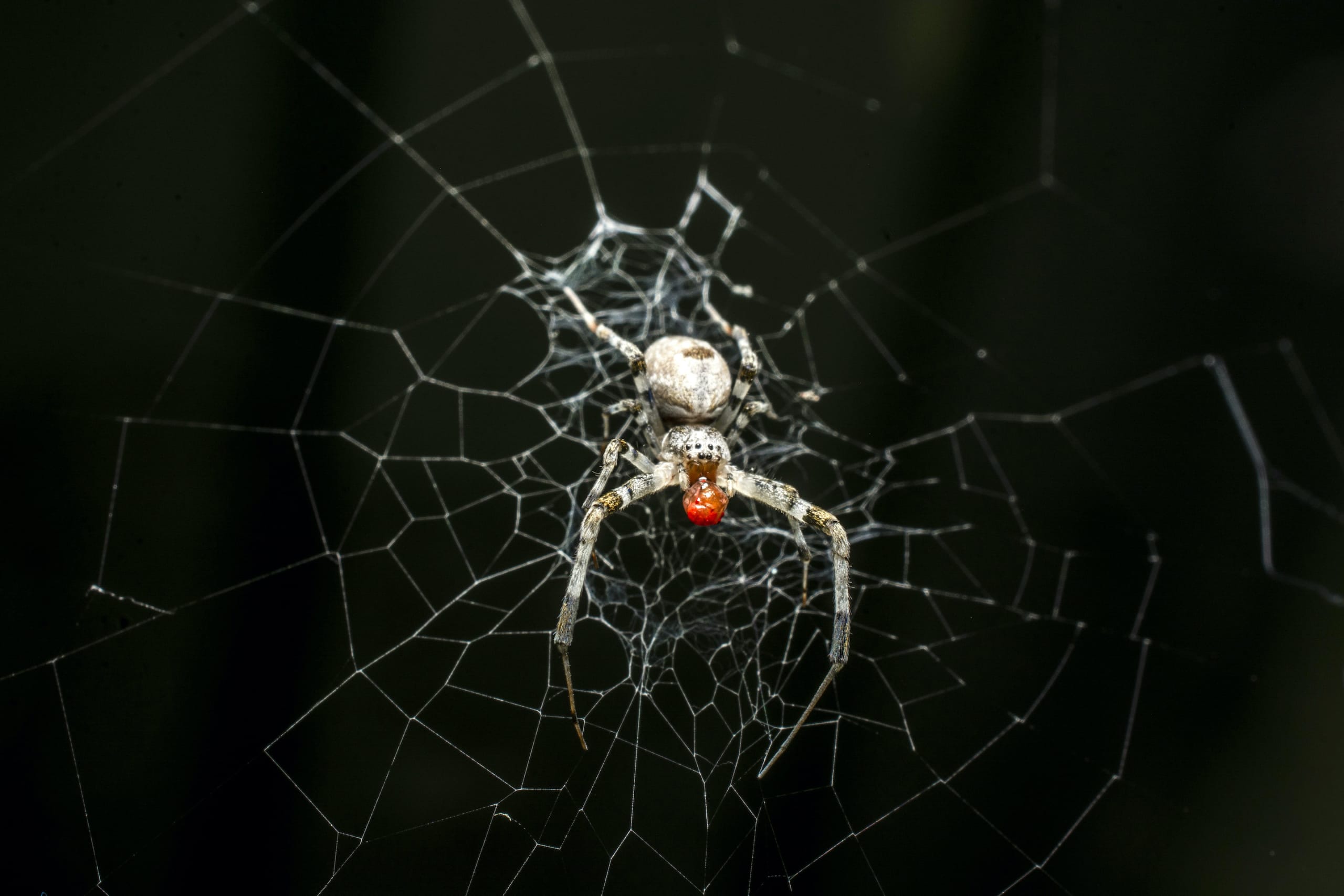 Amidst the many shapes and sizes that spider webs come in, there is something elegantly mesmerising about the webs built by orb-weaver spiders. Hunting is an art and the web of an orb-weaver is where form meets function at the seams. The two-dimensional orb-shaped webs are concentric circles of silk weaved onto a frame of radials that resemble a bicycle wheel. Of the 120 families of spiders that live on Earth, three have evolved to weave these tactical art installations: Araneidae, Tetragnathidae and Uloboridae.

Weavers of Imagination and Art
Fossil evidence suggests that three families of orb-weavers inhabited the earth for well over a 100 million years. A dizzying span of time compared to the 2.8 million that humans have been around. Nevertheless, they were polite enough to share the planet with us. Through many millennia of humans and spiders living alongside each other, orb-weavers and their webs have captured the human imagination. The orb-web is the poster child of nature-inspired design and features everywhere, from Spiderman’s costume to indigenous creation stories. Over the past century, however, most depictions of spiders in popular media have been less than kind to these gentle architects. 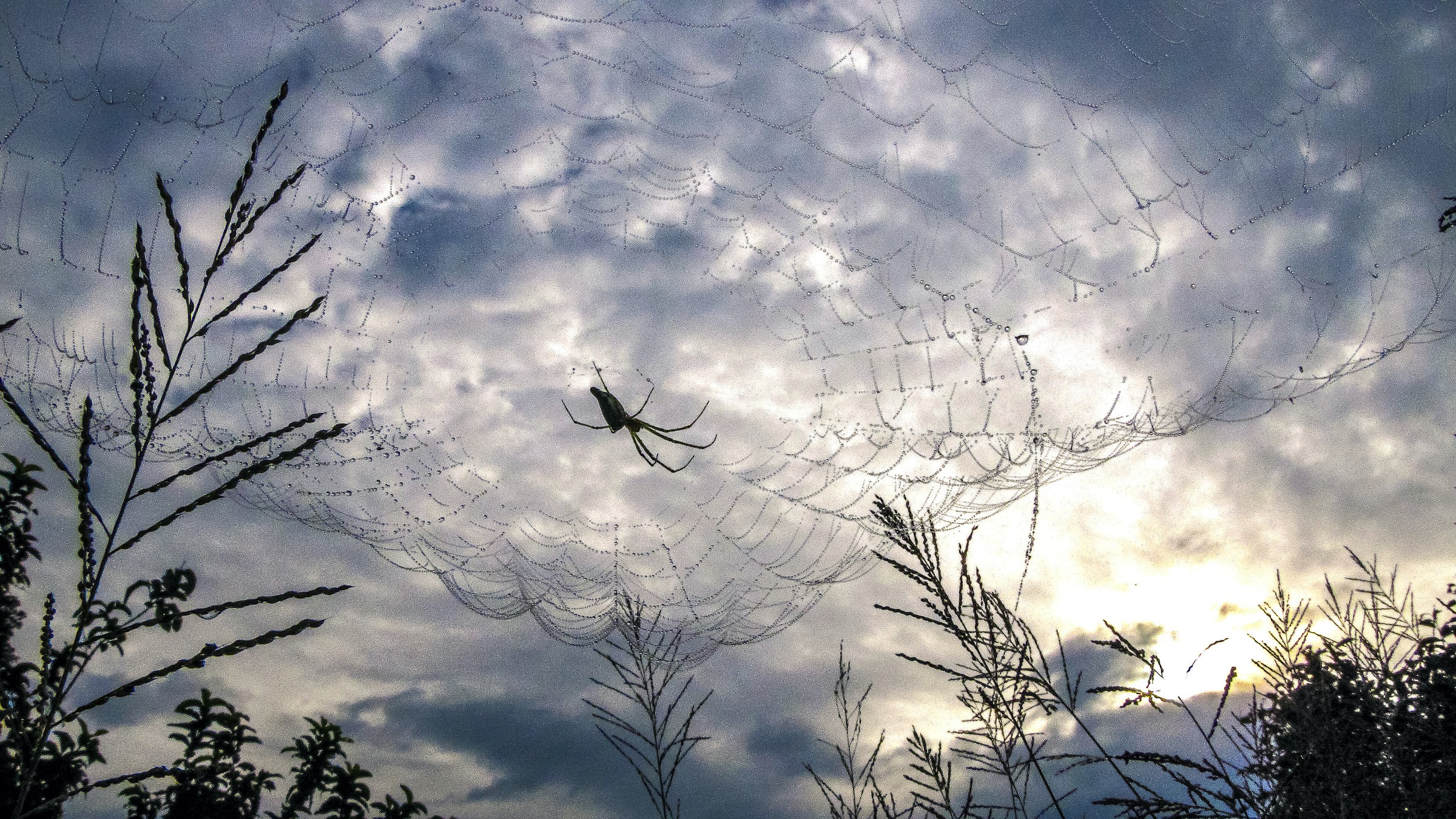 Due to their hygroscopic properties, spider webs catch droplets of morning dew, allowing us to see them more clearly. Photo: Chetana Purushotham
Cover photo: A Uloboridae spider snacks on a Drosophila (fruit fly) that was stuck on her web. The sticky cribellate silk lines of the Uloboridae are highly effective traps for catching aerial prey. Cover photo: Samuel John

The stories of orb-weavers from across time and space are as fascinating as the spiders themselves. Before spiders made an appearance in horror films like The Giant Spider Invasion or Arachnophobia, they featured in the folklore of various indigenous tribes. Tucked away in the Indian Ocean are the paradisiacal Andaman Islands where indigenous communities of the Great Andaman Islands speak of a goddess named Biliku (or Bilika). In the Chari language of one of these tribes, “Biliku” means “female spider”. The legend goes that the goddess walked around weaving the infinite sky into existence. After completing the sky, she created the earth, and rested alongside its human inhabitants in her spider form. The temperamental goddess is often associated with the northeast monsoon which is coincidentally the time when one sees the golden-orb weaver come out in large numbers in these islands. Indigenous communities from Australia to America also speak of spiders as weavers that created the entire cosmos.

In the earliest forms of three South Indian languages, weaver communities were named after the Proto-Dravidian word “saal” which translates to spider — saaliyan in Tamil, saalodu in Telugu, and shaaliga in Kannada. These direct associations of spiders with weavers both mythical and professional, hints at a possible source of inspiration for the weaver’s art.

The spider’s cultural influence is not limited to the abstract but has permeated functional artforms as well. The scientific name for spiders as a collective, Arachnida, has been named after Arachne, a legendary weaver from Greco-Roman mythology. In India, the relationship between spiders and traditional weaving communities is evident in the names of these communities. In the earliest forms of three South Indian languages, weaver communities were named after the Proto-Dravidian word “saal” which translates to spider — saaliyan in Tamil, saalodu in Telugu, and shaaliga in Kannada. These direct associations of spiders with weavers both mythical and professional, hints at a possible source of inspiration for the weaver’s art. 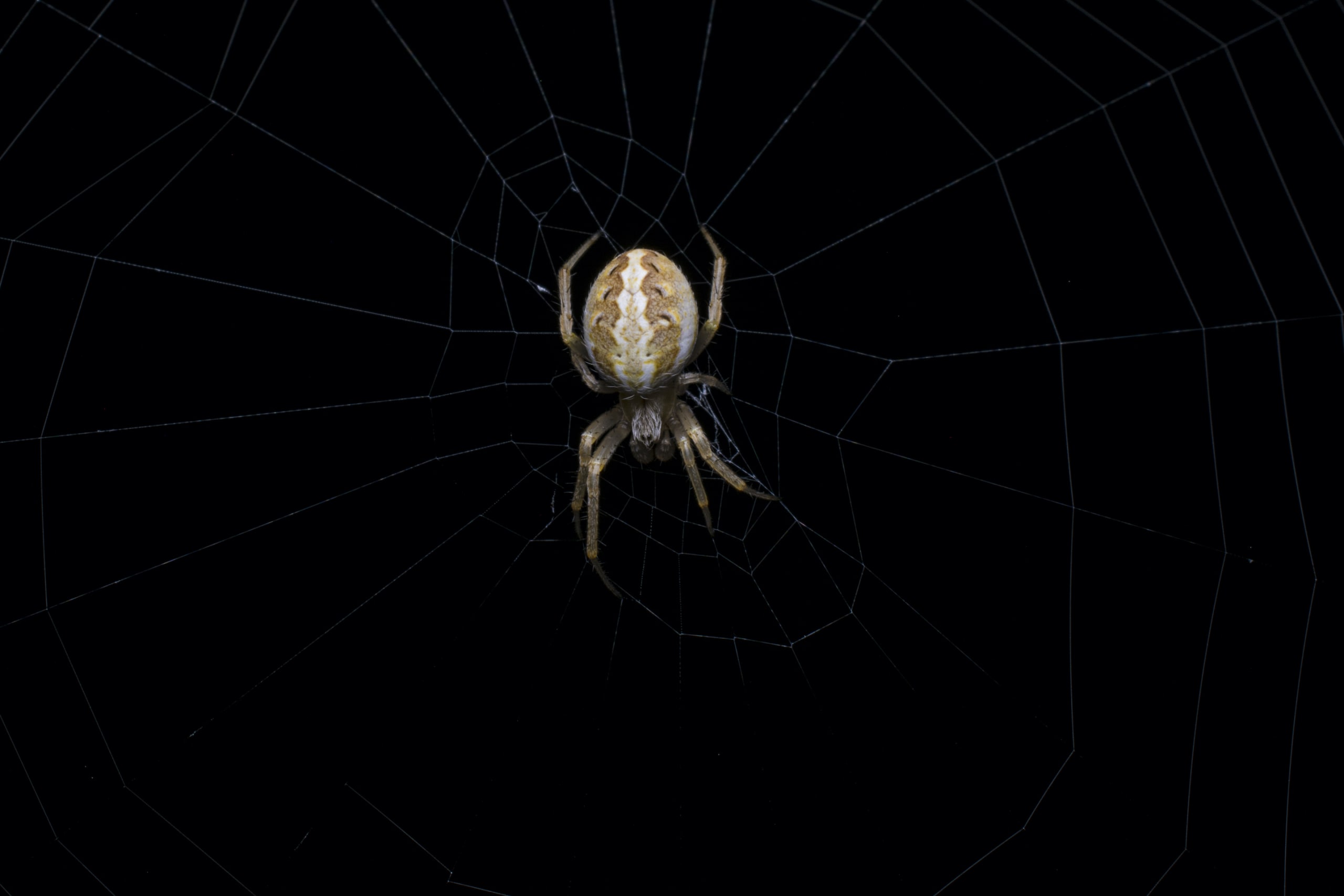 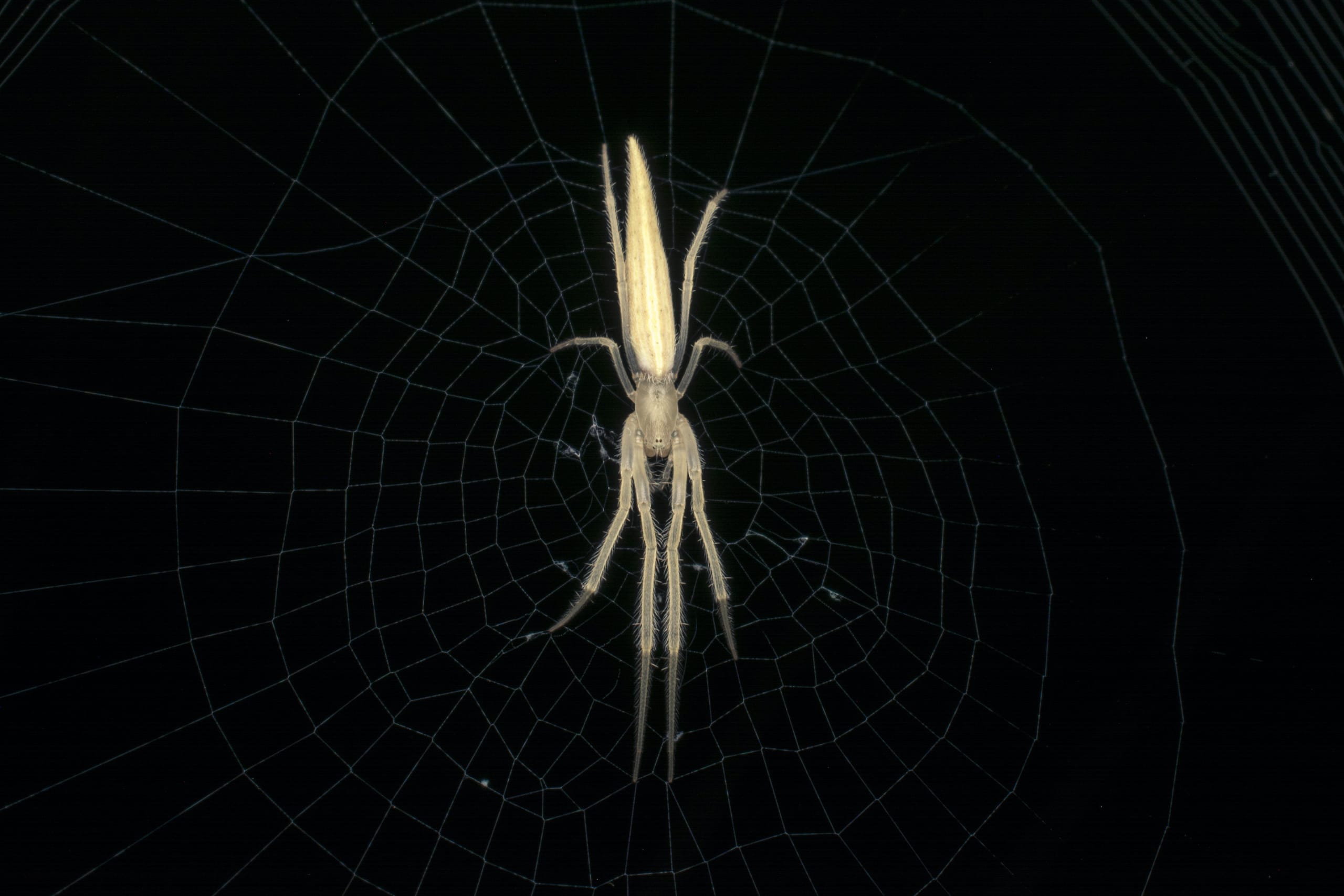 (Left) A garden orb-weaver sits patiently on the hub of her web. Orb-weavers rely primarily on their sense of touch rather than vision, unlike diurnal stalker hunters such as jumping spiders. (Right) Many spiders, like this long-jawed orb-weaver, rest in the middle of their web and wait for flying insects to get caught in the spirals. Photos: Samuel John

Spinneret Wheel
Unlike their human counterparts, orb-weaving spiders produce all the raw materials needed for their weaving endeavours from their own bodies. Inside the spider’s abdomen are silk glands that produce a variety of proteinaceous silks. Some orb-weavers have as many as eight different silks glands each producing its own silk for a specific purpose. For the orb-webs of the Araneidae and Tetragnathidae, three glands play a vital role. The ampullate gland produces the silk necessary for the strong but less elastic framework of spokes. The flagelliform gland produces the elastic axial threads that make the spirals. Finally, the aggregate gland produces the gluey substance that makes the web sticky. The family Uloboridae build their orb-webs with one interesting difference, instead of coating the spirals with glue, they cover parts of their web with a very fine mesh-like cribellate silk that act like microscopic Velcro. Uloborids are among the few spider families that can produce this type of silk using a specialised gland called the cribellum.

Each silk gland leads to a spinneret that opens out into a tiny spigot at the very end of the abdomen. Orb-weaving spiders also possess a small valve at the end of each spigot that allows them to control the thickness of the silk they are releasing. As the silk leaves the spider’s body, liquid silk turns into one of the most remarkable natural materials, a spider’s web. The process of turning that web into an orb-shaped masterpiece starts with building a frame, creating an auxiliary web, and ends with the creation of a sticky spiral web to catch prey.

(Top) Cyclosa bifida, an orb-weaving spider from the Araneidae family, wraps up a mosquito that just landed on her web. (Above) The underside of an orb-weaver. At the end of the its abdomen are spinnerets releasing silk as it completes repairs
on its orb-web. Photos: Samuel John

Learning Curve
Have you ever been so good at something that you can do it blindfolded? While spiders are not the kind to show-off, they do oblige scientists from time to time with some very impressive displays of skills. Even when the spider’s eyes were covered with an opaque paint, it went on to build its standard orb-web. This is not entirely surprising because most of these spiders build their webs at night with almost no reliance on sight. There are, however, another set of experiments that tested the abilities of the orb-weaver, quite literally outside of its natural environment.

In 1973, two garden orb-weavers, of the genus Araneus were sent into outer space in the Skylab space capsule. In perfectly weightless conditions, the spiders managed to build their orb-webs. A mind-boggling achievement for a thumbnail-sized artist. When you watch these artists at work, it is very apparent that gravity plays a vital role in the web construction process. The experiment was repeated in 2008 with another set of orb-weavers, from the genera Larinoides and Metepeira. The spiders were sent into outer space in near-zero gravity and filmed. The footage revealed that the spiders seemed rather disoriented and produced silk lines at random. After about three days this began to change. Where they would normally drop down using gravity, they were seen instead flailing their legs until they got to their destination. Through an inexplicably remarkable learning curve, the spiders began to produce orb-webs in outer space.

Spiders in the genus Cyclosa decorate their orb-webs with silken structures called stabilimenta. These structures work as a mode of camouflage for the spider. Photo: Samuel John