Every year, for about six months, the village of Kokkarebellur is taken over by painted storks. Locals believe the loud and beautiful visitors are like their own children 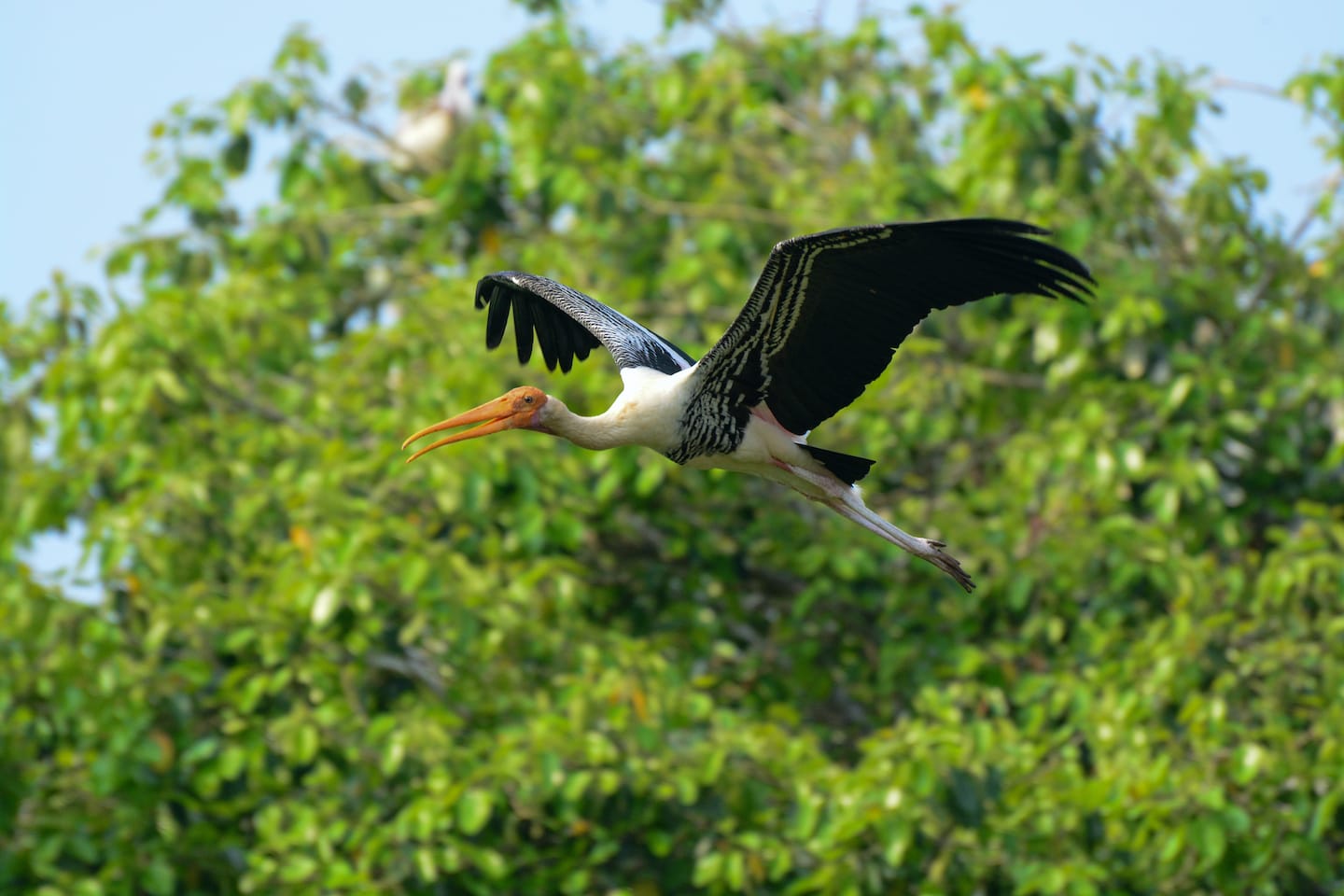 Several years ago when I was looking for stories on community relationships with wildlife, I heard of a village in Karnataka called Kokkarebellur or stork village. I was told that people of this village coexisted with painted storks and pelicans. I was also told that the storks were loved by the villagers so much that they considered them “daughters of the village”. Intrigued, I set out to look for the village.

We drove down the highway on instructions given to us by the Mysore Amateur Naturalists. The village is located between Bengaluru and Mysore in the Maddur area. Nearing the place where we had been told to look out for turn-off to the village,  we spotted small specks in the sky in the distance . As we drove down the turn, I could see a body of water through the trees. The Shimsha river glistened in the sun and there were a few pelicans in the distance. Excited, I was sure I would see the village immediately. The first few villages went by and we were not yet in Kokkarebellur. As we started moving away from the water, I started getting restless. Village after village slid by my window with big lush trees bereft of any birds. Just as I was going to ask the car to turn around, I started to hear some raucous squawking. Driving a little further, we suddenly found ourselves in Kokkarebellur! The first few trees were covered in birds. Pleased, I looked ahead. That’s when I realised that each one of the trees in the village was full of these beautiful storks. Suddenly all of the stories and myths surrounding this village seemed to make complete sense. The people of the village cannot remember if the birds were here first or if the village was established first. What they do claim is that around 1916, the village was in another location close to a pond. The birds were nesting in the trees then too. An illness, which some of the villagers described as a plague-like sickness, forced them to abandon their homes and move here. The story goes that the birds followed.

The elders here spoke of the birds with both exasperation and fondness. They described them like they would their children — “loud, naughty and very annoying at times but also beautiful and funny and endearing”. There was an age-old tradition in the village. The “daughters” of the village who left the village after getting married only returned to give birth to their children. The painted storks too come here to nest and rear their chicks, thus earning them the honorary title of “daughters of the village”.

The village is home to both painted storks and spot billed pelicans, which are listed as “near threatened” on the IUCN red list. Both species nest here for about six months of the year between December and June. The painted storks look gloriously dramatic with their bright mustard coloured beaks, their snowy white feathers delicately tipped in the most vibrant of pinks and blacks. Smaller than most other pelicans, these are still large birds, with mostly white plumage and the famous pouch beneath their beaks. In both the storks and the pelicans, there are no obvious physical differences between the males and the females. This is an interesting phenomenon called sexual monomorphism. Usually when this is the case the birds pick long-term partners to nest with or mate for life.

(Left) The delicate pink on the edges of the males and the dramatic black gives them a brush-stroked look, hence the name painted storks. (Right) The birds choose long-term sexual partners and use the same nests (right) for a few consecutive seasons. Painted stork nests in the village of Kokkarebellur.
Photo: Ram Kumar T M/Shutterstock (left), Bhargav Shandilya (right)

Over the years, the Shimsha River has become slow and shallow due to dredging for sand mining but other ponds and irrigation tanks have sprung up. Both the storks and the pelicans primarily feed on fish and now have to fly several kilometres to forage for food. The chicks are always hungry and require a lot of food as they grow very fast. Within months they are nearly as a large as their parents. The parents not only have to feed themselves but have to go back and forth a lot to bring food back. They then regurgitate this food into the mouths of their chicks.

Over the years, the lifestyle of the people of the village has also changed resulting in challenges for both the humans and the birds. As the population of the village has grown, land availability has shrunk and agriculture has slowly reduced to give way to livestock rearing. At one point, there was a symbiotic relationship between the people and the birds. The bird droppings or the guano, rich with nitrogen and ammonia from their diet, was collected from the base of the trees and the fallen leaves and used as the fertiliser for the fields. Now with cheap fertilisers and pesticides available, the practice of collecting guano is reducing. It is still collected after the first rainfall as the wet leaves and guano make for a rich soil food, but it’s no longer the primary source. The livestock also needs to be fed and many branches and leaves are stripped off the trees to feed them. New enterprises like clay and brick kilns are demanding more firewood as fuel. Some of the villagers also grow silkworms, that also require leaves as food. All of this is resulting in the trees being denuded. These trees are extremely crucial to the presence of these birds in Kokkarebellur. They need spread out branches and lush canopies so that parents can access their chicks easily. If there are more trees, the birds can space themselves out. As trees are increasingly felled, the birds have to crowd on to fewer trees causing stress and fights. The lack of canopy hurts the baby birds and they also fall out of the nests more easily without protection from branches and canopies.

(Top) Locals consider painted storks to be daughters of the Kokkarebellur village in Karnataka, who have come home to give birth to their young. (Above) A house in the village with drawings of painted storks and spot-billed pelicans on the wall.
Photos: Bhargav Shandilya

The Mysore Amateur Naturalists rescues fallen baby birds to rehabilitate and release them. Often the villagers bring the baby birds they find to the small rescue centre established in the village. The naturalists are also working with the villagers to get them to protect the trees where the birds nest. The villagers complain that the forest department has done nothing to help them. The department has marked the trees seen as important and trees with marks are not allowed to be touched. The villagers have been demanding compensation for not touching the trees and they also want a more formal set-up for tourism in the area. Many birders come to the village to see the birds and this does not benefit the villagers monetarily. Even the Mysore Young Naturalists Society functions only because of donations and if tourism can be organised to be more formal, everyone could benefit. And like any story of harmonious human-wildlife coexistence, the more the villagers benefit, the more the birds will benefit too.