The amusing 1910 limerick by Dixon Lanier Merrit maintained that:

Now limericks are usually high on the ridiculous and low on facts, but this one speaks the truth! The pelican’s bill can hold more than 11 litres of water, two or three times the capacity of its stomach!

Pelicans are wonderful birds even though they are closely related to the African shoebill and the hamerkop. Also, they have a few food habits some might not approve of, such as gobbling up pigeons and baby seabirds. Fish, of course, remain their first dietary preference, but hey, who doesn’t like a change?

Pelicans (genus Pelecanus) are galleon-like waterbirds, that weigh up to 15 kg and have wingspans of nearly 3 m. They combine the clownish and clumsy with gracefulness and magnificence. On the water, they look squat yet are buoyant as corks, and their most prominent feature is their huge, down-curved, fishhook tipped “shopping-bag” like bill: the lower mandible of which forms a huge fishing net or gular pouch (which also flutters like a fan to cool down the bird). 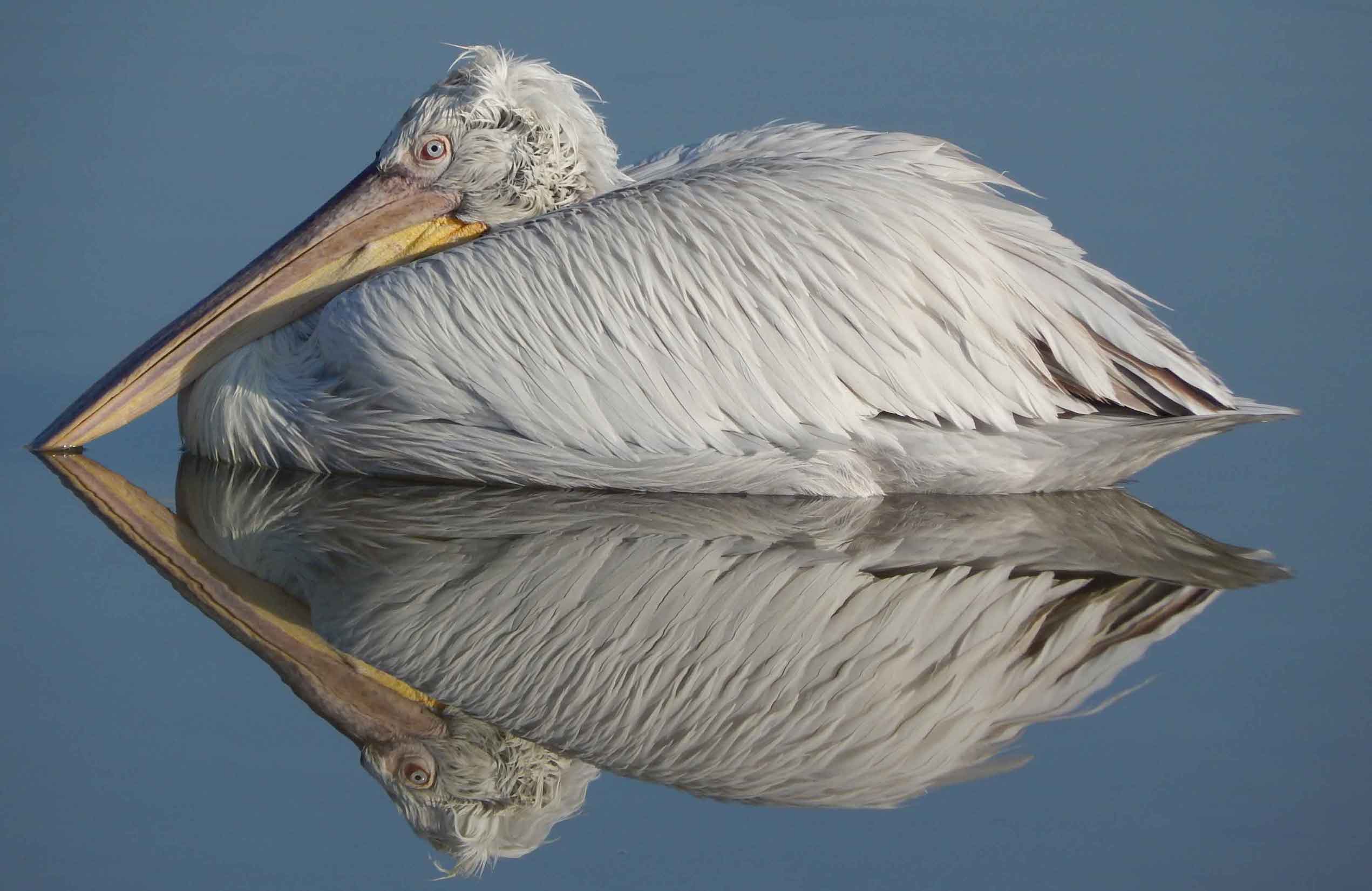 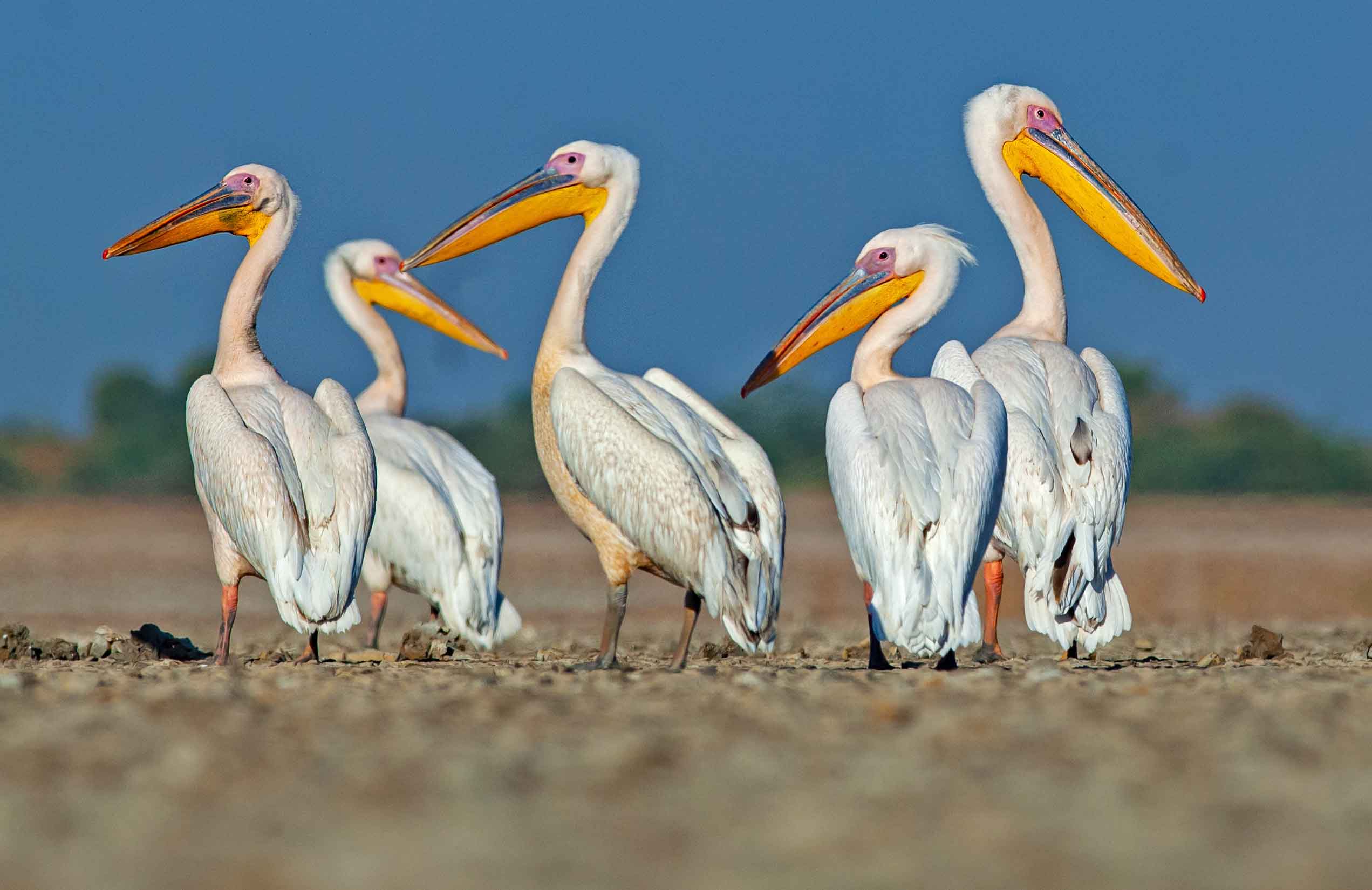 (Left) The Dalmatian pelican is one of the world’s largest and heaviest of flying birds. It stands tall at about 1.5 m, while its wingspan can stretch up to 2.4-3.3 m. (Right) Rosy pelicans look elegant thanks to the pink tinge on their necks. They are mostly silent, but their occasional calls sound like low, hoarse grunts and growls. Photos: Koustabh Dutta, CC BY-SA 4.0 (left), Dhritiman Mukherjee (right)
Cover Photo: Spot-billed pelicans are extremely social birds that live and travel in large cooperative flocks that also hunt together. Cover Photo: Dhritiman Mukherjee

The great white pelican is part resident and part winter migrant to north India. Resident birds breed on the Rann of Kutch alongside the greater flamingo in the “flamingo cities”. The birds have an attractive rose-pink tinge to their plumage, humorous bright button eyes, that gigantic yellow shopping-bag bill, and an absurd little tuft of a crest. In winter, they congregate in huge numbers on lakes, jheels, and other waterbodies.

In Delhi, I used to trot off to the National Zoological Park in the mornings to watch them fly. The flock at the zoo would huddle conspiratorially on one of the small lakes, and then by around 10 am, when the thermals would start rising, they would get ready to fly. The “squadron leader” would swim to one end of the lake and, facing the wind, begin to flap its enormous wings like an aircraft revving its engines. Its webbed pink feet would paddle furiously, and it would flap and splash rapidly towards the copse of trees at the other end of the lake as I watched with bated breath. Finally, it would lift off and rise with majestic dignity, just about clear the trees, before banking and gaining height, its head laid back in a flat Z against its back. Then the second-in-command would follow suit, and soon, the whole flock of about a dozen or more birds would be wheeling in circles on the thermals, gaining height till they were just black and white crosses against the blue sky. (They can fly to over 10,000 feet.) But the conniving zoo authorities would pinion some of the birds (to lure the free fliers back, I assume), and these poor birds would be left flapping in frustrated circles on the lake. 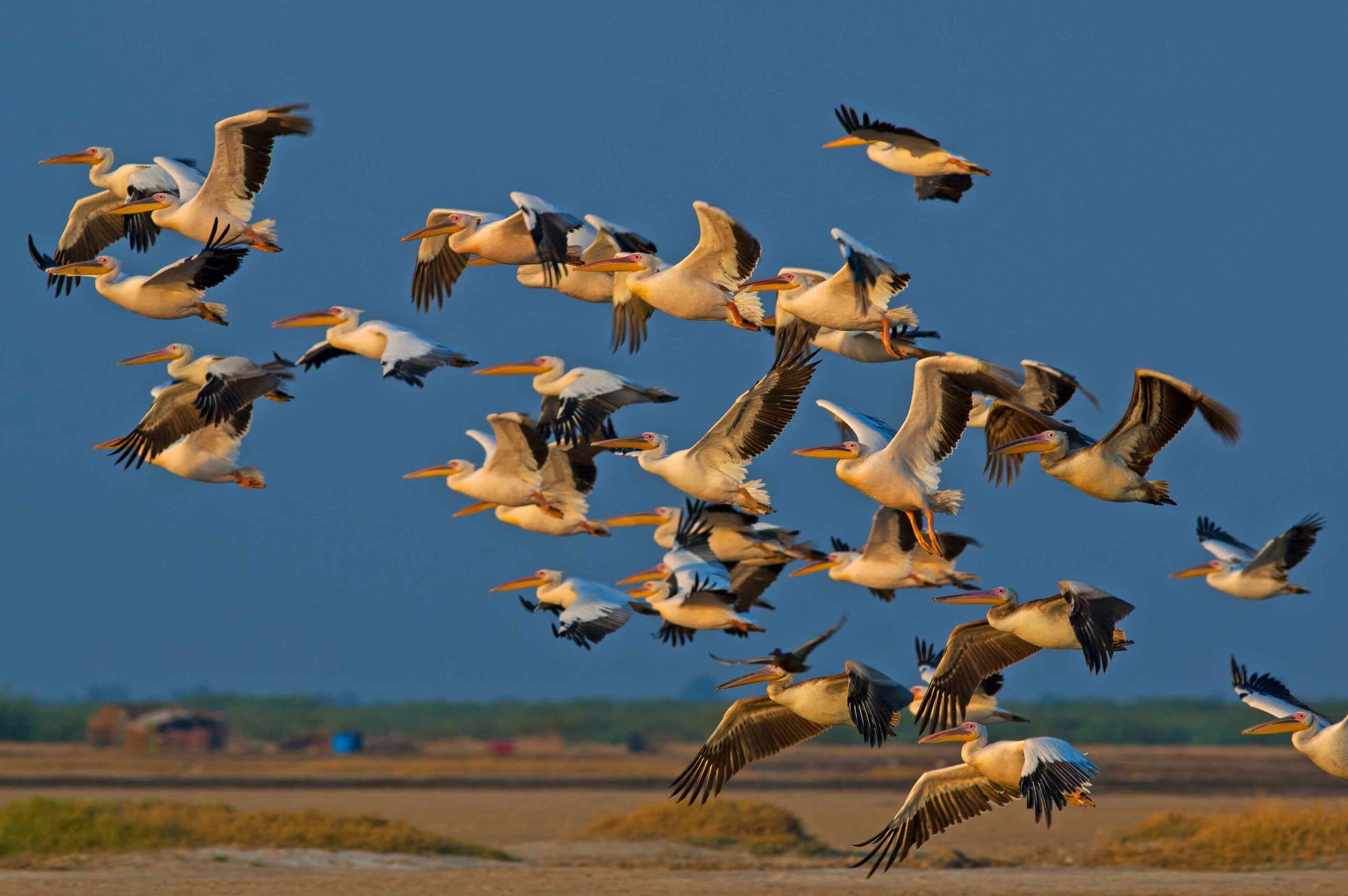 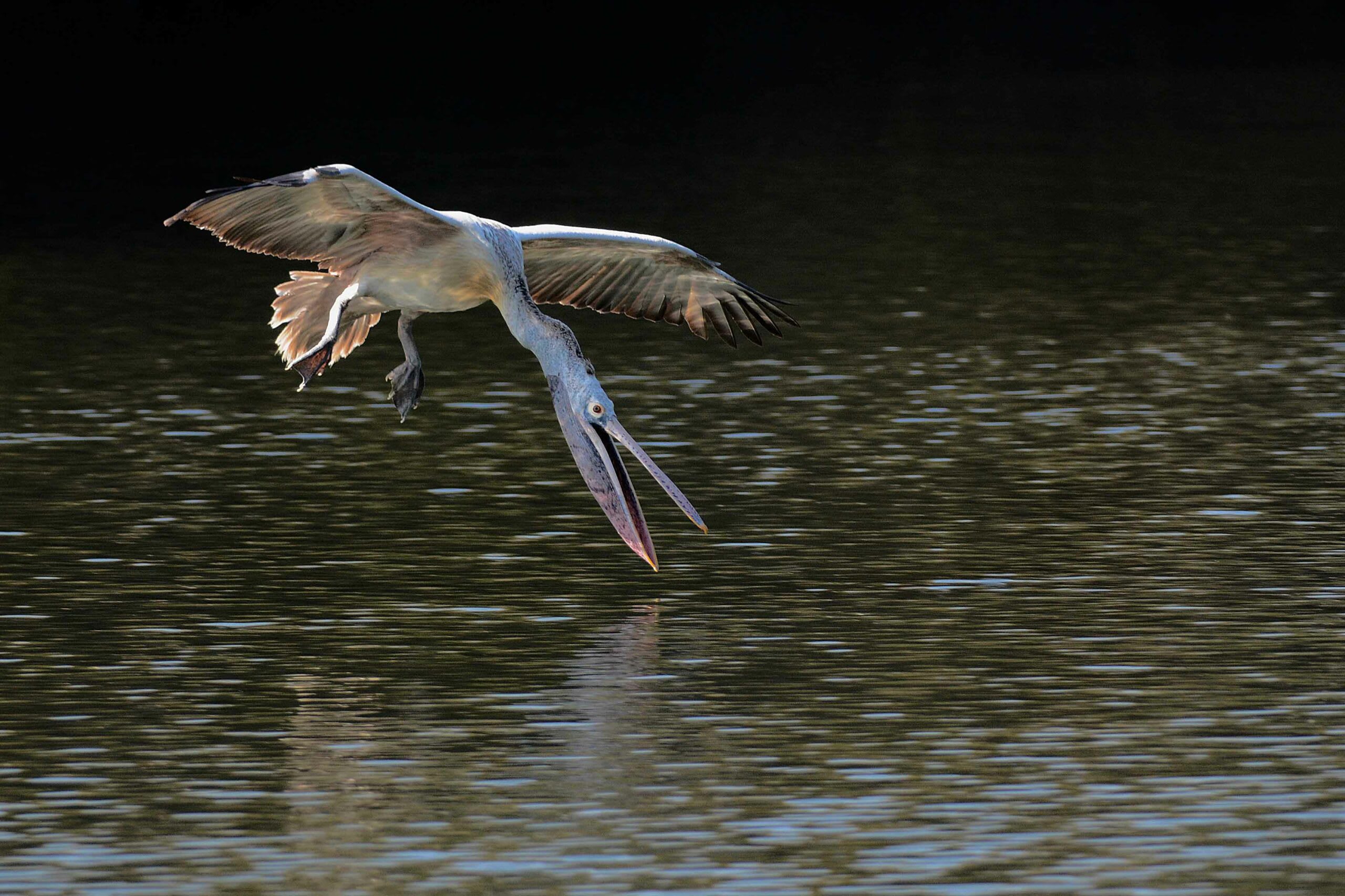 (Left) When in flight, the rosy pelicans’ dark feathers, otherwise hidden beneath the white ones, become visible. (Right) The spot-billed pelican is a keen-eyed hunter that scoops fish while floating on the water’s surface. Photos: Dhritiman Mukherjee (left), Photosynthesis85, CC BY-SA 4.0 (right)

Pelicans are ingeniously engineered. Heavy as they are, their bones (weighing less than 700 g) are tubular and hollow and filled with air. Their bodies too are lined with subcutaneous air sacs — under the belly, wings, and their flat breastbone — to give them buoyancy and lightness. Their broad wings help them fly for long distances (sometimes over 150 km) in search of food, in long echelons or the classic “V” formation, while their webbed feet help them swim well.

Pelicans need around 2 kg of fish per day, and they may fish singly or cooperatively. I’ve watched the zoo flock spread themselves in a line in the water, then, flapping and splashing vigorously, approach one end of the lake, forming a horseshoe. Near the bank they would dip their huge bills into the water and scoop up the fish they had corralled, allowing the water to drain before swallowing the fish. Pelicans are also known to eat amphibians, and crustaceans, and to swallow seabird chicks. In London, they have been seen gobbling up blue rock pigeons.

Spot-billed or grey pelicans breed in south India (between October and March) and spread over the rest of the country at other times. They nest, cheek by jowl in colonies on trees. All baby pelicans (usually 2-3 eggs are hatched) as a rule make a hell of a racket. Small chicks may disappear entirely into their parents’ pouches while grabbing the goodies being regurgitated. The parents press their bills against their chests to completely empty their pouch. This has been especially observed in the Dalmatian pelican, whose pouch turns blood-red at this time. It has given rise to the myth of the birds feeding their young with their blood. In India, according to some local legends the parent may have killed its chick and now tries to resurrect it by sprinkling its own blood over it. Pelican chicks leave home around two months after hatching, form gangs as teenagers, mature in three to four years, and can live until they’re twenty.

Free-ranging dogs are an emerging threat to pelicans and other waterbirds in the Little Rann of Kutch, Gujarat. They are known to hunt pelicans and destroy their nests. Photo: Dhritiman Mukherjee

The migratory Dalmatian pelican is very similar to the great white pelican except that it has grey legs and feet, not pink, and it is found in winter in northwest India.

While most species seem to be doing alright (except the spot-billed and Dalmatian pelicans which are listed as “Near Threatened” by IUCN), they are thought of as fishing competitors for humans and may suffer the consequences. Populations are falling worldwide due to the usual culprits of habitat destruction, pesticides, poaching, and human disturbance. Nesting colonies may be abandoned if people (including birdwatchers and photographers) approach too close. So, give these wacky but wary birds the space they require, so that they feel comfortable and safe. You can be sure that they will reward you with a slapstick take off (followed by some spectacular soaring) or demonstration of cooperative fishing, where in a single scoop they’ll net more than you can in an entire day.