Various species of pikas occupy the meadows and rock-strewn slopes of Ladakh, and they all stockpile enough food to last them through the bitter winter

The high altitude cold desert of the Himalayas is a unique biome which leaves most visitors awestruck. At first glance, it may appear as a boundless, barren landscape with clear blue sky and snow-clad mountains. The seemingly barren landscape is actually a place of unique biodiversity. Its uniqueness perhaps stems from the properties of extreme dryness, climatic instability, and high-intensity solar radiation that have led only specialist species to adapt and survive. Pikas are one such specialist species most commonly found in this habitat.

Pikas have small, round bodies with no tail. Their colouring helps them blend seamlessly in their rocky surroundings. Photo: Shivang Mehta Most pikas utter short, shrill calls to warn others against predators. Cover photo: Saurabh Sawant

Pikas are tiny mammals often mistaken for rats (of the order Rodentia), but are actually relatives of rabbits and hares (of the order Lagomorphs). The easiest way to distinguish between a rodent and lagomorph is through the shape of its poop. Generally, rodent poop looks like rice grains while pikas, like other lagomorphs, have round poop. While most mammals hibernate and save their energy during the freezing winters, pikas remain active. Though few studies have been done on pikas from the Himalayan region, extensive work on pikas from North America suggests that pikas have reduced exposure to the external environment during freezing winters. Pikas are herbivores that depend on local vegetation for their food. Therefore pikas start preparing food for the dry winter months in the summer season. They cut locally available plants, dry them in the sun, and store them. Plants from high altitudes often contain high levels of secondary metabolites, which are phytochemicals with a strong smell. These serve as a plant’s self-defence mechanism against herbivores, as the strong smells make them unpalatable. The process of sun-drying is known to reduce the secondary metabolites, making them palatable for pikas.

Ladakh is home to several species of pikas — Nubra pika, Ladakh pika, Royle’s pika, large-eared pika, and plateau pika. Some of these pikas occupy meadows and some live in talus patches (rock-strewn slopes). The meadow dwellers generally make burrows, while the talus dwellers live in rock crevices. Their differences are not just in home design, these species are known to differ in their ecology and natural history as well. Talus dwellers supposedly live longer and are highly territorial. Meadow dwellers, on the other hand, are known to be very social. However, these conclusions are drawn from studies of other pikas, not specifically from the ones found in the Himalayas.

The Ladakh pika has soft rufous-fawn-coloured fur, which is thick during the bitter winter months, and thins out in the summer. Photo: Shivang Mehta

The burrows of species like plateau pika are complex, with multiple entrances, interconnected by underground tunnels. But Nubra pikas make simple and shallower burrows. To keep them safe from predators in such simple burrows, they choose sites in shrubberies of common regional plants like caragana which have prickly and sturdy bushes.

For my PhD research I worked on estimating the distribution of pikas along environmental gradients of the Himalayas, to identify differences in species‐environment relationships. Ladakh was one of the places I sampled.

Royle’s and large-eared pikas are talus dwelling Himalayan pikas. They do not make burrows, but live inside crevices of rocks that form small and huge talus patches. These talus patches are usually found on scree slopes. Talus dwelling pikas spend a lot of time basking in the sun. They can also be seen foraging in nearby patches of vegetation and at streams, quenching their thirst. The similarity of habitats often leads to misidentification of the two species — large-eared and Royle’s pika. The simplest identification hint lies in their ears. As the name suggests, large-eared pikas have larger ears. As pika fur colour changes with the seasons and throughout their lifespan, identification based on fur colour is not consistent. 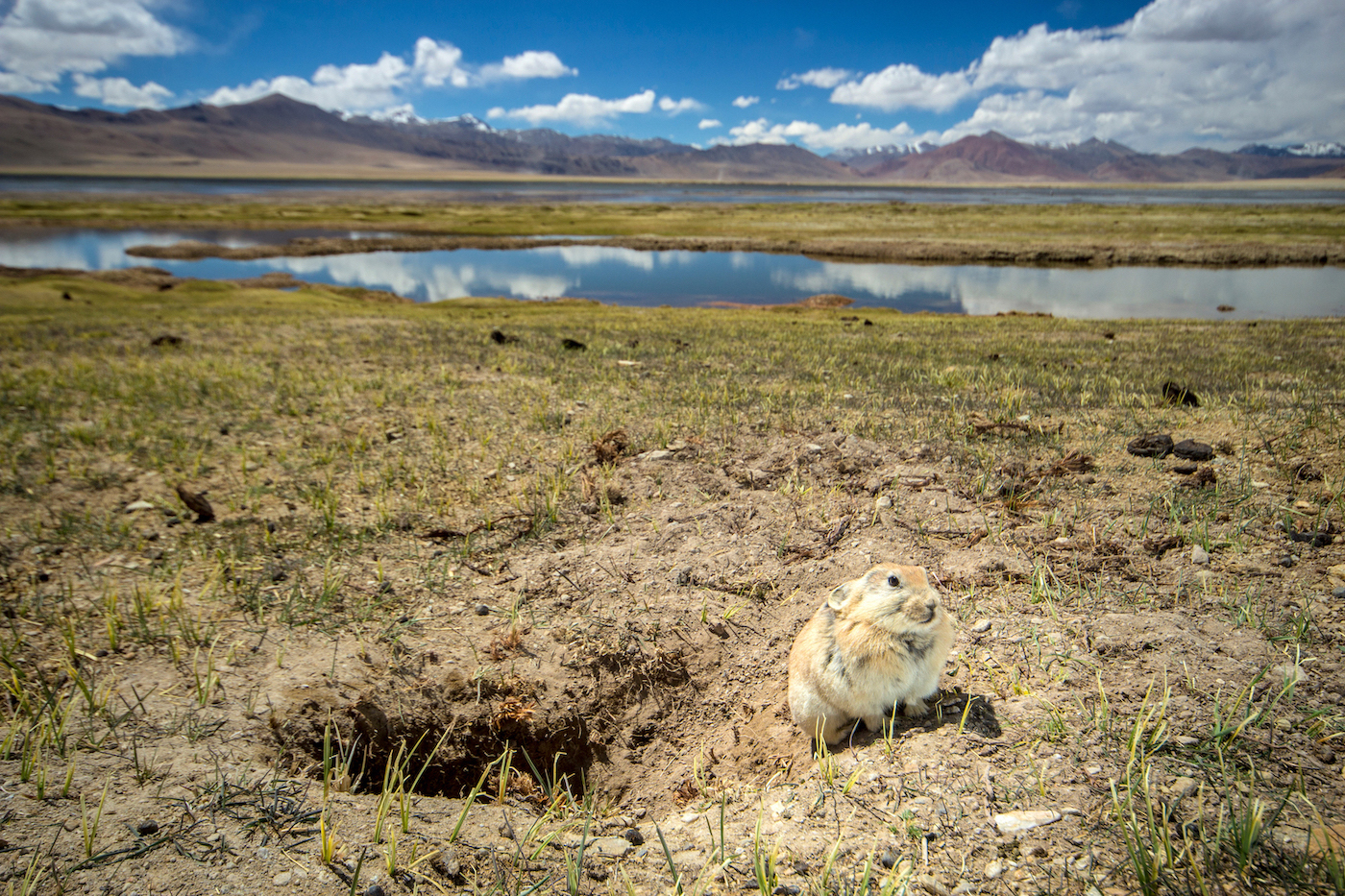 The Ladakh pika is a social animal that lives in family groups in burrows with multiple entrances. It is extremely alert and will scurry away into its burrow at the slightest sign of danger. Photo: Saurabh Sawant

Taxonomically, Ladakh pikas belong to the same group as Royle’s and large-eared pikas. But unlike these two talus dwellers, the Ladakh pika constructs deep burrows. Ladakh pika is the biggest species, weighing around 250 g as opposed to the usual 80- 150 g weight of most other species found in the Himalayas. The faecal pellets are also noticeably bigger. Being large, I expected that they would be tough to capture. Surprisingly, they were found to be the most docile and easy to trap. The same individual kept visiting the trap for food. Dorjay, who works for the Nature Conservation Foundation, had accompanied me to the isolated area of Kalak Tartar in Hanle, where we captured and released Ladakh pikas. The Himalayas reportedly have seven species of pikas, but those were based on visual identification, which can be error prone. We attempted to use both genetics-based and visual identification to confirm species. In a week, we managed to capture around 14 different individuals, the highest capture success so far from my trapping experience in the entire Himalayas.

Ladakh pikas are highly social. They are usually seen interacting and playing with their neighbours. The burrowing site of Ladakh pikas is also inhabited by tiny rodents called voles. Though they share the same landscape, they were not seen to share burrows, unlike other burrowing species. Plateau pikas, on the other hand, make complex burrows which are often shared with voles as well as small birds like snow finches. 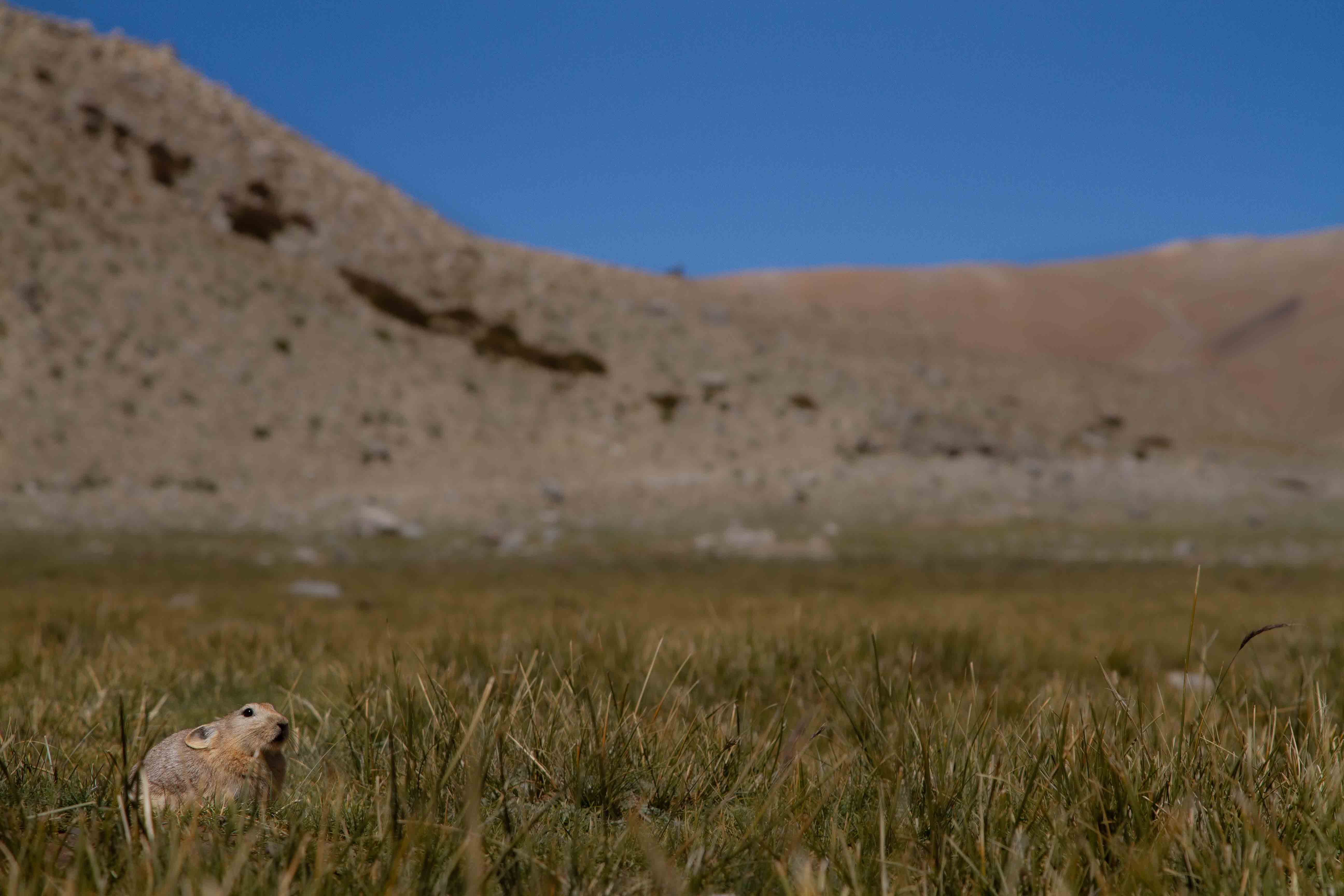 Pikas are usually found in high-mountainous regions such as Ladakh. Their thick fur and ability to store food for harsh winters helps them survive tough climate conditions. Photo: Shivang Mehta

Pikas are the epitome of cuteness. Apart from the joy of watching them in their natural habitat, pikas play an important ecological role. Studies have shown that the habitat of burrowing pikas usually has higher plant species diversity because of the soil aeration that occurs during burrowing. Pikas are food for birds of prey, foxes, snow leopards, and other predators. The pika is considered an “indicator species”, it is the proverbial “canary in the coal mine”. Which means that the effects and dangers of climate change in high altitude habitats will first be felt by pikas. 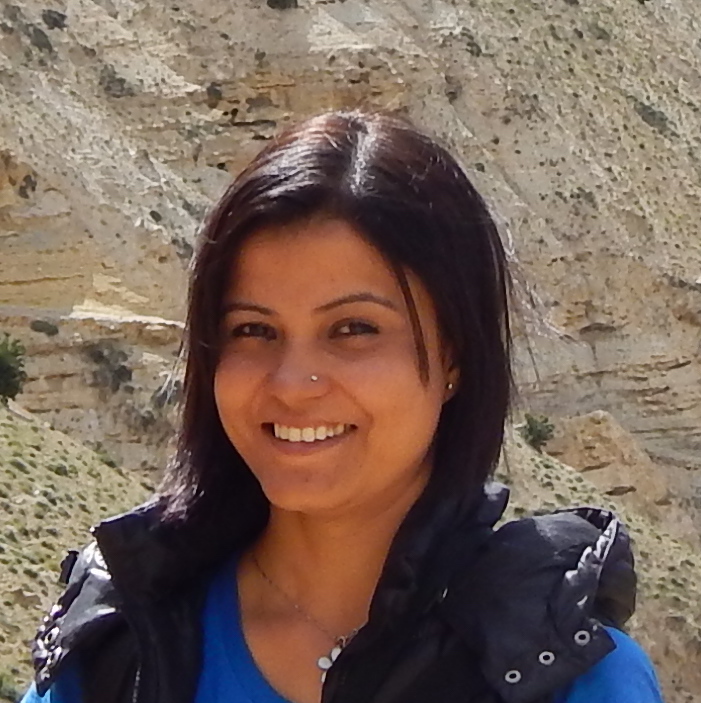 is a DST–INSPIRE faculty at CSIR-IHBT, Palampur. She studies pikas to understand high altitude adaptation and their vulnerability to changing climate.