Knock on Wood: The Pygmy Woodpecker Makes an Appearance

A soft knocking sound caught my attention. I cocked my head to listen closely and muttered to myself, “Sounds like a woodpecker”. I was on my morning walk in our housing society, located on the outskirts of the bustling town of Dehradun, the capital of the hill state of Uttarakhand. Our housing society is relatively new, having been established only in the mid-2000s. We moved to Dehradun in 2008, from Pune, in an attempt to lead a quieter life, closer to nature. Since then, my wife Anchal has helped green the society, and has planted quite a few native trees. In the last decade, the area has greened up considerably, and now there are numerous tall trees. Despite this, my sightings of woodpeckers have been infrequent. So the knocking sound of a woodpecker’s beak on a tree trunk was worth investigating. 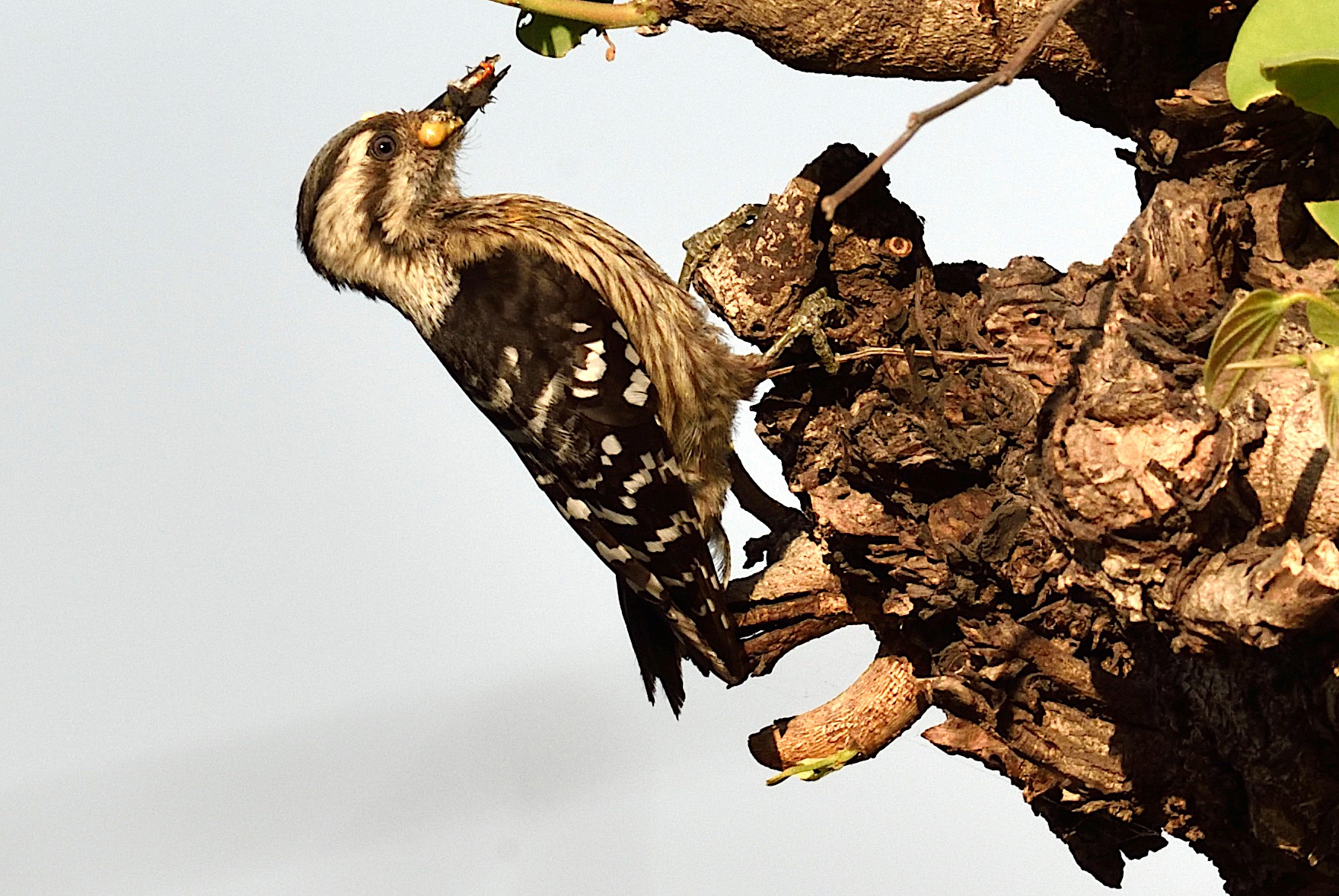 The grey-capped pygmy woodpecker is a small common woodpecker found in the foothills of the Himalayas, quickly recognised by its dark grey crown, a black stripe that runs across its eye and black and white plumage. Photo: Sanjay Sondhi

Though I could not spot the bird immediately, from the soft knocking I guessed it was either a pygmy woodpecker or a piculet — both birds are amongst India’s smaller woodpeckers. The knocking of the larger woodpeckers’ beaks is louder, and an experienced birder can tell the difference. Peering this way and that, following the sound, I tracked it. When I finally spied the creature my suspicions were confirmed. It was indeed the grey-capped pygmy woodpecker (Dendrocopos canicapillus). Though a common woodpecker in the Himalayan foothills, this was the first record of this species in my housing society and I was awestruck. Perhaps my wife’s efforts at greening were paying off.

Pygmy woodpeckers, like most other woodpeckers, are primarily insect eaters, though they may occasionally feed on fruit and the odd lizard or frog, if they can catch it. When observing a woodpecker pecking on a tree trunk, it’s common to see it cock its head. It is doing so in order to hear the movement of insects inside the tree trunk, the ones that it may have disturbed by its pecking. Many woodpeckers prefer old or even dead trees. These trees are more likely to have termites and other insects inside their rotting wood. Also, old, rotting trees, with their soft wood, are easier for woodpeckers, especially smaller ones like pygmies, to pry apart in their search for insects. 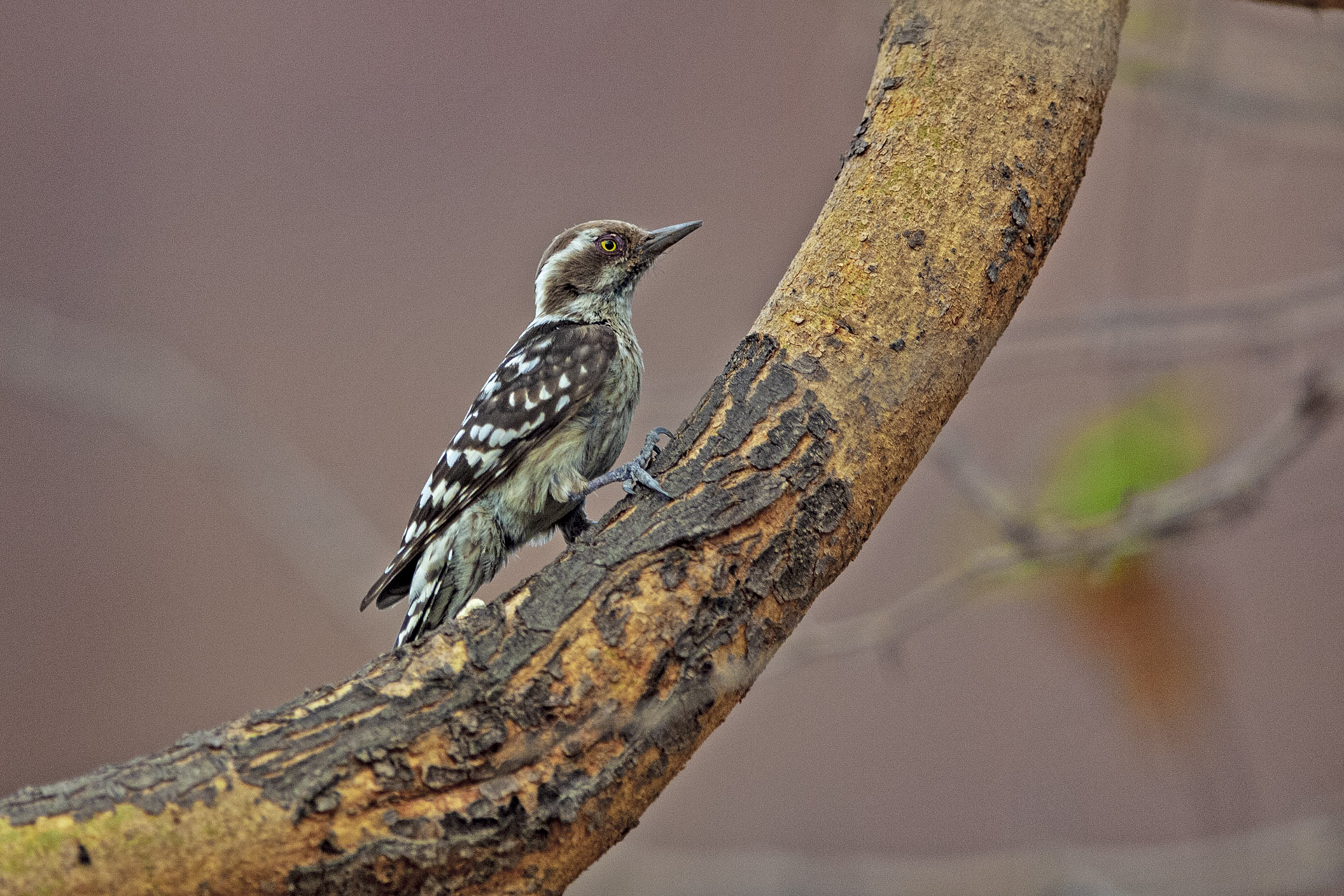 Often spotted crawling on tree trunks in search of food, the brown-capped pygmy woodpeckers use their strong bills for drilling and drumming on barks, and long sticky tongues to scoop out insects, ants and larvae. Photo: Dhritiman Mukherjee

The importance of old and dead trees in our forests for woodpeckers, and indeed other biodiversity cannot be understated. Often, I hear forest managers’ say “sukhe, mare ped bekar hai” (dry or dead trees are useless). In many forests, people are allowed to take dead trees for their own use, but are discouraged from cutting living trees. Unfortunately, these decisions are not taken keeping biodiversity in mind; they are primarily taken from the viewpoint of commercial forestry and their usefulness as commercial timber. Dead and rotting trees play a crucial role for biodiversity. Not only do they provide crucial nutrients to the soil when they decompose, they are usually teeming with life. Dead trees and fallen logs are home to insects, insect larvae, cavity-nesting birds, and fungi, and provide tasty food for woodpeckers like the pygmies. The next time you find a dead tree near your home, don’t chop it down; allow the tree to play its crucial part in nature.