It’s not predators this gorgeous butterfly needs to worry about, but invasive species of plants that are taking over our jungles

A flash of white and yellow zipped by my eyes as I sat in a safari vehicle in Kaziranga National Park. I twisted and turned to catch a better glimpse of the tiny insect flying about us. Everyone else with me had their eyes glued for mega-fauna, the one-horned rhinoceros, in particular. I was a little grumpy, as my visit to Kaziranga had forced me to put aside a ground rule that I had developed for myself in forests; if I can’t walk, I don’t go. I love being on foot in the natural world, as that allows me to see all of nature at work, the mammals and birds, of course, but the other smaller, lesser-known creatures like insects as well. In most parts of Kaziranga National Park however, only vehicle and elephant safaris are allowed, keeping in mind visitor safety. The flitting, colourful butterfly quickly dispelled my grumpiness.

The butterfly I had spotted settled on a flower nearby, and I observed it through my binoculars. What a beauty! I had spotted the red-spot jezebel (Delias descombesi). The butterfly has a bright yellow with a large red spot on the underside of its hindwing. 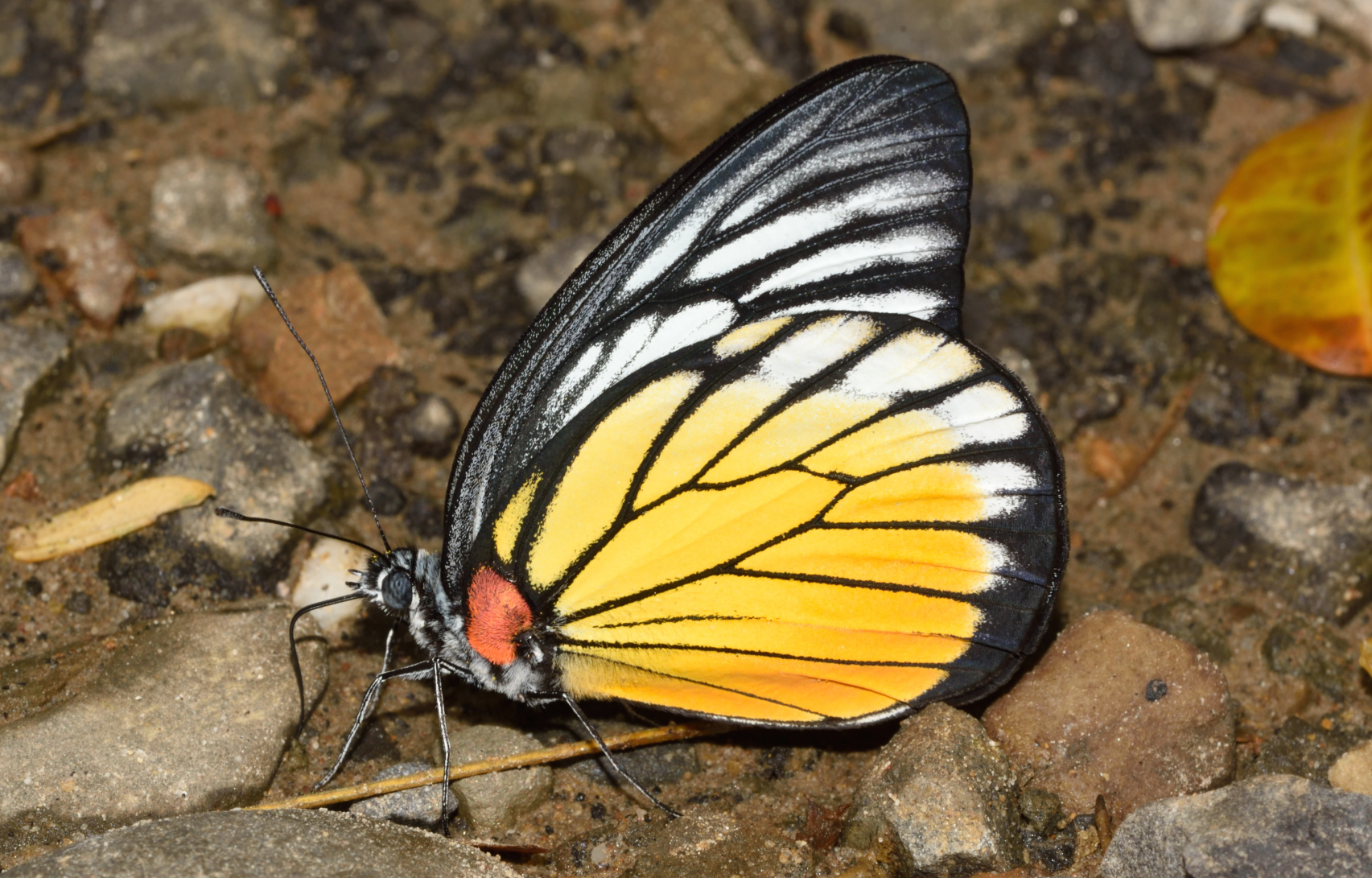 Butterflies such as this red-spot sawtooth mimic the red-spot jezebel’s vivid colouration and slow flight pattern, which is a very effective deterrent against predators. Photo: Sanjay Sondhi

The Delias group of butterflies also called the jezebels, number in excess of 250 species worldwide, primarily in the Indo-Australian region. In India, there are 10 species of jezebels known, and the one I had spotted was a common species, but restricted to the central and eastern Himalayas and parts of Northeast India.

The red-spot jezebel once again wafted past my face. It had a slow, gentle flight, and seemed unconcerned about predators, such as birds, because like other jezebels, it tastes bitter to predators. As a caterpillar it feeds on plant toxins and chemicals, which makes the adult butterfly unpalatable. Hence, the butterfly freely advertises its presence through its bright yellow-and-red markings on the underside, unconcerned that it will be eaten. The protection strategy of the red-spot jezebel is so successful, that other butterflies, such as the red-spot sawtooth Prioneris philonome, mimic the jezebel’s colouration and flight pattern.

The red-spot jezebel belongs to a group of butterflies known as whites and yellows, and gets its name from the large red tint on the underside of its hindwing. Photo: Sanjay Sondhi

The red-spot jezebel descended onto a flowering bush on the roadside, and I observed it feeding on the nectar of lantana flowers. A few minutes later, the butterfly was spotted feeding on another flower, Ageratum, called the floss flower. Both these plants are invasive plants that have spread through most of India, including forested regions. Lantana and Ageratum displace native plant species, and fauna such as the red-spot jezebel are left with no choice but to feed on their nectar.

Most insect species are dependent on specific plant species to lay their eggs. These are called their larval host plants. Another downside with invasive plants displacing native species is that the larval host plants for many insects are declining, thereby limiting their ability to lay eggs. The red-spot jezebel, like other jezebel species, lays its eggs on the parasitic plant Loranthus. In India, the red-spot jezebel has been reared on Scurrula ferruginea, a member of the Loranthaceae family.

The spread of invasive species throughout India, nay the whole world, remains a huge threat to survival of species, as does the destruction of forest habitat to unrelenting pressure of development needs of humans.

The red-spot jezebel flitted by me one final time. With a quick circle around my head, it flew to the top of a nearby tree. In the butterfly’s waft by my head, I seemed to hear its plea: “Safe for now, dear human, but for how much longer?”