These honeybees have cleverly adapted to the changes in their habitat and make their hives with as much ease on high-rise buildings as they do in forests, cliffs, and trees 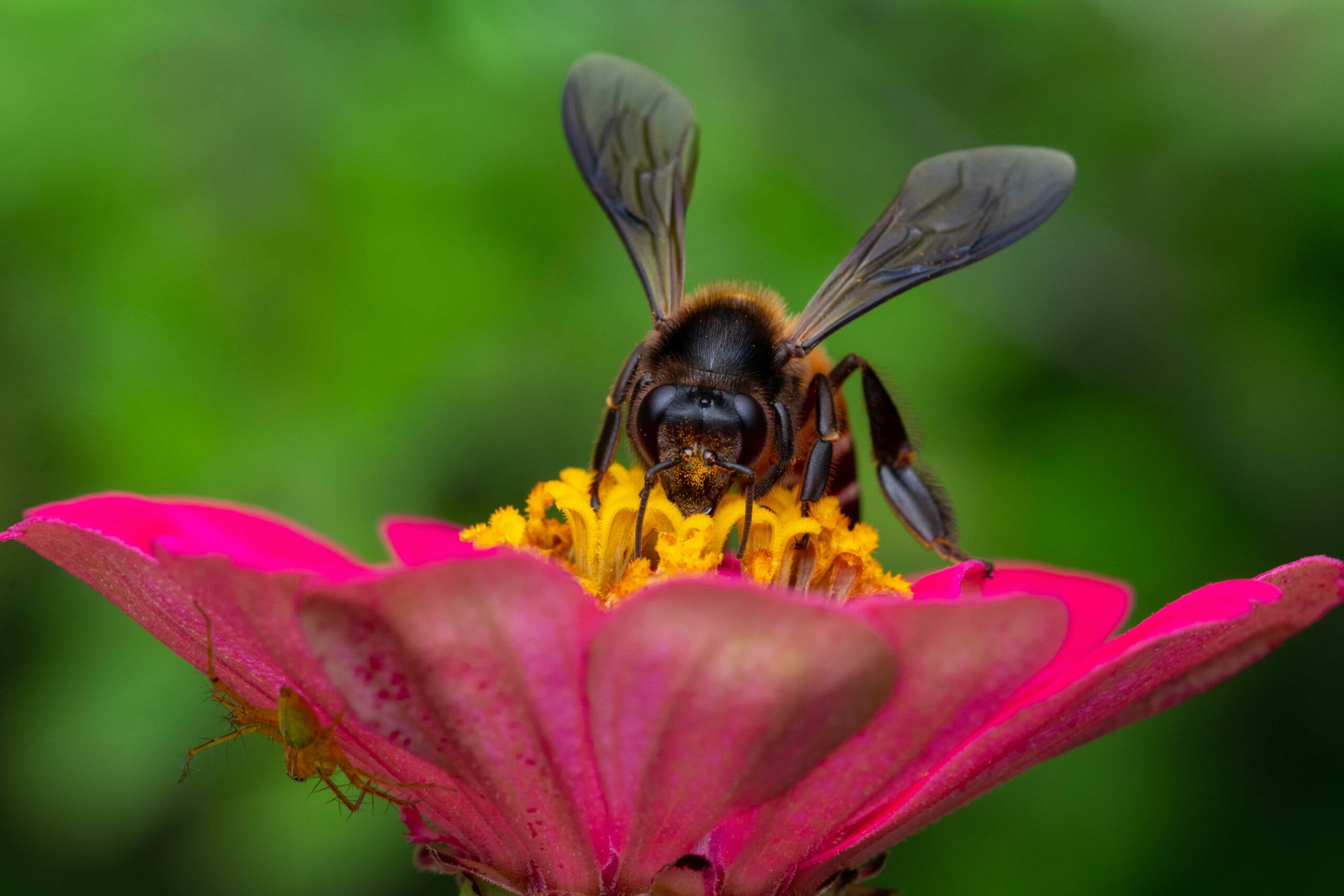 In my apartment’s utility area, a large bee with translucent wings lands on a leaky tap. Extending her proboscis, she gently licks water off a wet rag wrapped around the tap. I watch her, unnoticed, from the window. I observe how she comes around the same time each morning. Over the course of the month, I find she is bolder around me, and even though now I am filming her activities, she doesn’t seem bothered by my presence. She is an urban dweller, like me. My guess is, she lives on the ninth floor of my apartment building, where I have noticed a large beehive.

In 2015, I moved into this high-rise, gated community in Bangalore. The first thing I noticed here was the massive beehives on canopies and ledges of the higher floors. These hives were anywhere between one to three feet in size. The management routinely had to deal with complaints of bees entering houses and possibly endangering the lives of the residents, particularly children. They were being called “killer bees”, and with great disdain, they were being exterminated using pesticides. Highly disturbed by this, I set out to learn more about Apis dorsata or the rock bee, one of the most misunderstood insects of the urban landscape. I wanted to document its story in a film. Instead, I stumbled onto the fascinating and enigmatic world of wild bees — both social and solitary — a distinction I never knew existed.

Worker rock bees form a permanent curtain to shield their honeycomb from the elements and protect the brood. Photo: Rajani Mani Cover photo: Rock bees, found in South and Southeast Asia, are among the largest species of bees in the world and measure around 17–20 mm in body length. Cover photo: Jithesh Pai

India is home to approximately 723 bee species representing six families. Of these, we have five social bee species of the genus Apis, or honeybee – A. dorsata (rock bee), A. laboriosa, A. andreniformis, A. florea, and A. cerana (the only cavity-nesting species). We also find the European honeybee (Apis mellifera), imported into the country in 1983 to support bee farming. Apart from this, there is another category of social bees of the family Tetragonula, or stingless bees.

Social bees form less than 4 per cent of the world’s bee species, and the remaining 96 per cent are solitary, according to “Discover Life bee species guide and world checklist” by Ascher & Pickering (2020). The bee world is dominated by lone rangers that do not produce honey for human consumption. Solitary bees live by themselves, nesting in holes and burrows in soil or dead wood. My apartment balcony has hosted three generations of carpenter bees (Xylocopa) inside a dried-out stump of a moringa tree planted once with unbridled optimism. The first visitor had used her powerful mandibles to burrow into the soft deadwood, and since then, I have noticed more members occupying this space each year. Some bees also nest in the ground; I learned this after noticing a tiny bee emerging from a hole in the soil of an asparagus fern pot. It turns out that soil is the most common material used by bees for nesting. Other nesting styles include wood nesters, architects (using materials like plant fibre, mud, and resin to construct hard, water-resistant nests), cavity nesters, and renters. The reclusive lifestyle of the solitary bees is in stark contrast to the flamboyant nesting of social bees like the rock bees we see on apartment balconies.

Rock bees are farmers’ friends; they help pollinate crops such as cotton, mango, coffee, pepper and star fruit. This individual covered with pollen is feeding on the nectar of Strobilanthes flowers. Photo: Nikhilmore, CC BY-SA 4.0

Rock bees construct massive open nests on vertical cliffs or high up on tall trees with a widespread crown in the wild. In the Western Ghats, I have seen that they are very partial to trees such as the black dhup (Canarium strictum), red silk cotton (Bombax ceiba), and pink cedar (Acrocarpus fraxinifolius). Another fascinating characteristic of rock bees is that they build communal nest sites (this is called nest aggregation).

Sometimes you can see between 50 to 100 colony aggregates in a single location. In some sense, honeybee colonies in gated communities in the city are like their nest aggregations in the wild. These wild honeybees have cleverly adapted to the rapid changes in their habitat, and the high-rise buildings provide the same stability and protection they find on cliffs and tall trees. The level of adaptation of these wild bees to urbanisation is evident from the way they frequent juice shops. More recently, a video from Brazil that showed two bees teaming up to open a bottle of Fanta went viral.

Despite these enterprising adaptations, rock bees are treated as pests in urban centres, feared, reviled, and worst of all, demonised by news stories. How did these bees get such a bad reputation? Rock bees are known to have an aggressive defence strategy when disturbed. This could be because their open, exposed nests are vulnerable to predators, like wasps, birds, and mammals. But before the bees attack a perceived threat, they perform a fascinating defence display called “shimmering”. Shimmering is a show of waves moving across the surface of the nest in a fraction of a second. While following rock bees through various landscapes, I’ve witnessed this shimmering mechanism a few times. The bees appear to use this warning tactic as their first line of defence. Another characteristic that brings them in conflict with humans in cities is their unique ability to fly in low light conditions. While most bees are diurnal, rock bees are crepuscular, i.e. they forage at dawn and dusk. When these bees are out foraging at night, being phototactic, they are automatically drawn to apartment lights and cannot break away. This fatal attraction eventually impacts the mortality of the entire hive because people are scared of being stung, which leads to colony removal. In my experience, however, you can never truly get rid of the rock bee. Nor should you. These bees are philopatric, i.e. they return to the original nesting site year after year.

Rock bees usually construct their hives in open areas such as tall trees, rock cliffs and buildings. It is not uncommon to see aggregated hives (left), such as these on a false hemp tree, nor a hive in a high-rise apartment in a big city like Bangalore (right). Photos: Vinayaraj, CC BY-SA 4.0 (left), Rajani Mani (right)

Yet rock bees do not stay in one place for a long time. They are a migratory honeybee species, and like most other native Indian bees, not a lot is known about them. Research on their innate behaviour and responses is still developing. There are speculations that they display short-range migrations in search of food and long-range migrations, right before monsoons, as an evolutionary response. Bangalore sees a spike in rock bee colonies between October and February when trees like eucalyptus, copper pod, tabebuia, jacaranda, and pongamia bloom. Once the season is over, the bees migrate. Meanwhile, in Kodagu (Coorg), in the Western Ghats biodiversity hotspot region and about 200 kilometres from Bangalore, I’ve observed rock bees from February to May. The bees arrive here to benefit from the rich nectar of trees that flower during this time. Interestingly, right in the middle of this pollen fest, coffee blooms as well. Research has now pointed out that one in three bags of coffee is the contribution of bees, and rock bees are one of the primary pollinators.

But we have to thank rock bees for more than just coffee. These generalist bees are responsible for a significant percentage of the pollination of wild flora and cultivars, and they benefit several landscapes on their migratory journeys between our apartment perches and fields and forests. 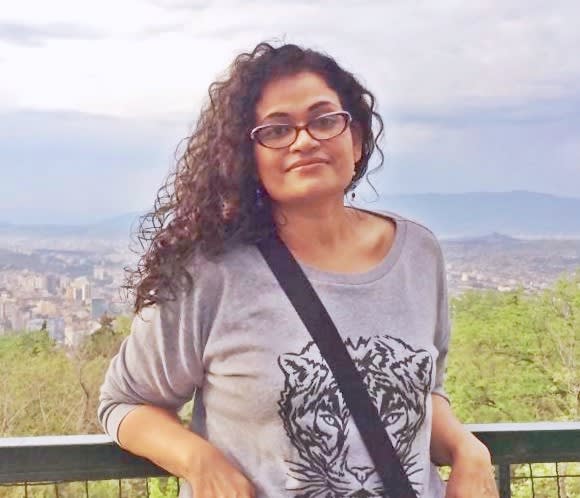 is a documentary filmmaker with Elephant Corridor Films, a Bengaluru based creative agency. Currently she is working on "Colonies in Conflict" a film that examines the state of wild bees.