Endemic to the marshes and pools of the Western Ghats, this pretty dragonfly is also a good indicator of ecosystem health

Text by: Vivek Chandran A 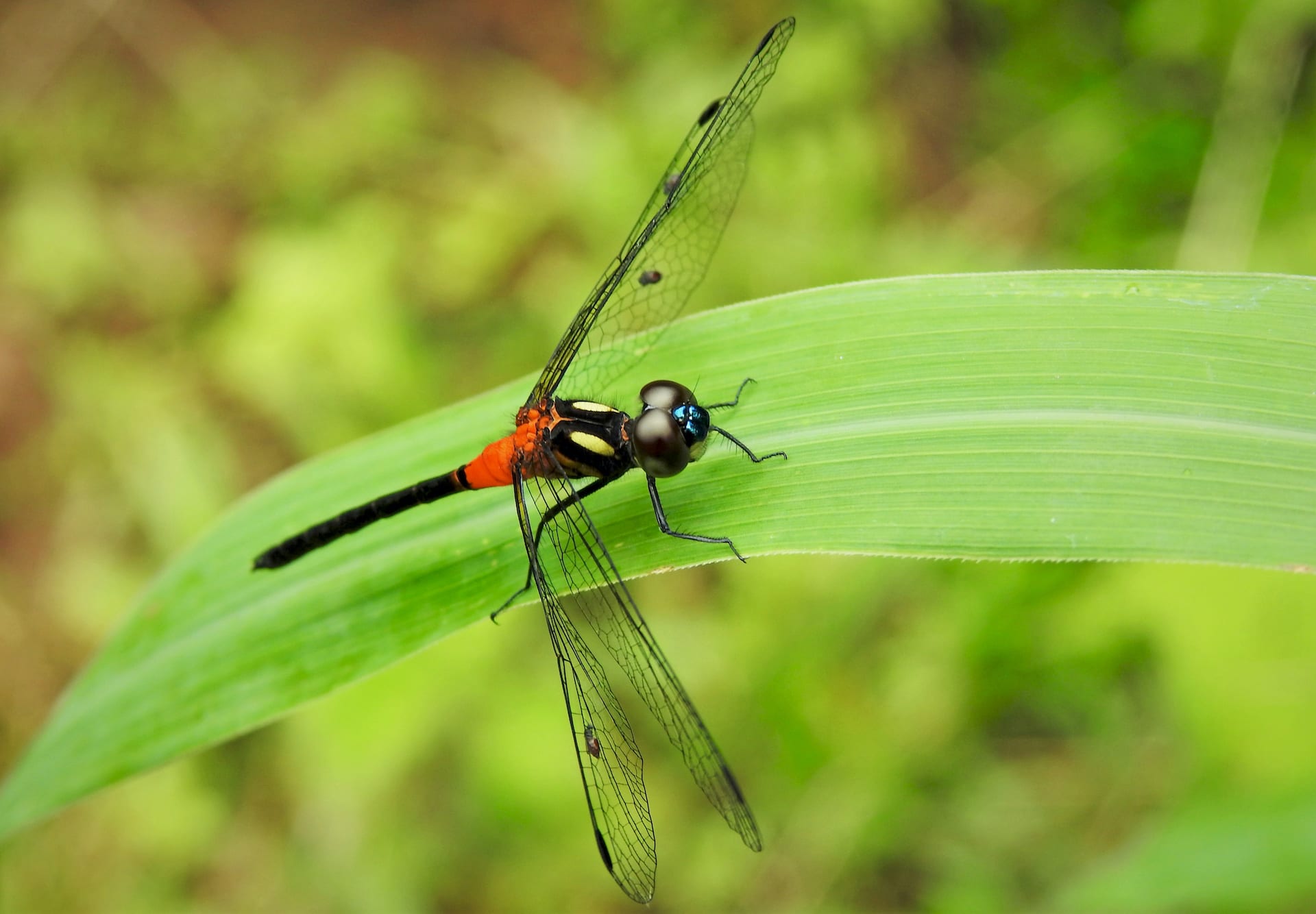 Knee deep in water and armed with a bridge camera, I looked around for dragons. No, not the mythical kind, the insect kind. Yes, dragonflies. I was in a vegetated pond inside the Vazhachal Reserve Forest in central Kerala. Due to the profusion of dragonflies found here, we, a team of four researchers, named the waterbody “dragon pond”. We were in Vazhachal to assess the impact of the 2018 flood on biodiversity, a study funded by Kerala State Biodiversity Board. For lesser-known taxa such as dragonflies, this was the first documentation effort in the area. As we waded around in the pond to record every species present, ghostly white insects flew sluggishly to make way for us. They were teneral damselflies, adults newly emerged from aquatic nymphs. We ticked off more than ten species, including the beautiful Indian violet dartlet (Aciagrion approximans krishna), the shy fulvous forest skimmer (Neurothemis fulvia) and the tiny white dartlet (Agriocnemis pieris). We were about to climb out of the pond when a flash of black and red caught my attention. Oh my gosh! Could it be? I hadn’t seen that endemic jewel before. I parted some grasses and peered to find a dainty little dragonfly perched on a blade of grass at the edge of the pond — a ruby-tailed hawklet (Epithemis mariae). He was a handsome black insect with a sparkly blue face and fiery red midparts. Two yellow collar marks added elegance to his appearance. He seemed relaxed and let me take some close-ups. That’s the thing with dragonflies, you can observe them up close and personal in the wild. I was staring at the little dragon through the viewfinder, when from the corner of my eye I saw our watcher rushing towards us from the jeep. I knew something was up but was too excited to leave and decided not to tell the others. I looked around and found two of hawklet’s female friends. As I started a shoot of the ladies, we heard a trumpet from the reed thickets behind the pond. That’s what our watcher was trying to warn us about! Now that we heard the animal’s warning, we didn’t need any convincing. All four of us leapt out of the pond like frogs and made a dash for the jeep. The Asian elephant commands respect. I checked the photos of the ruby-tailed hawklets as we drove out of the forest. The females were very different. They had black stripes on yellow bodies, but also the characteristic metallic-blue face like the male. 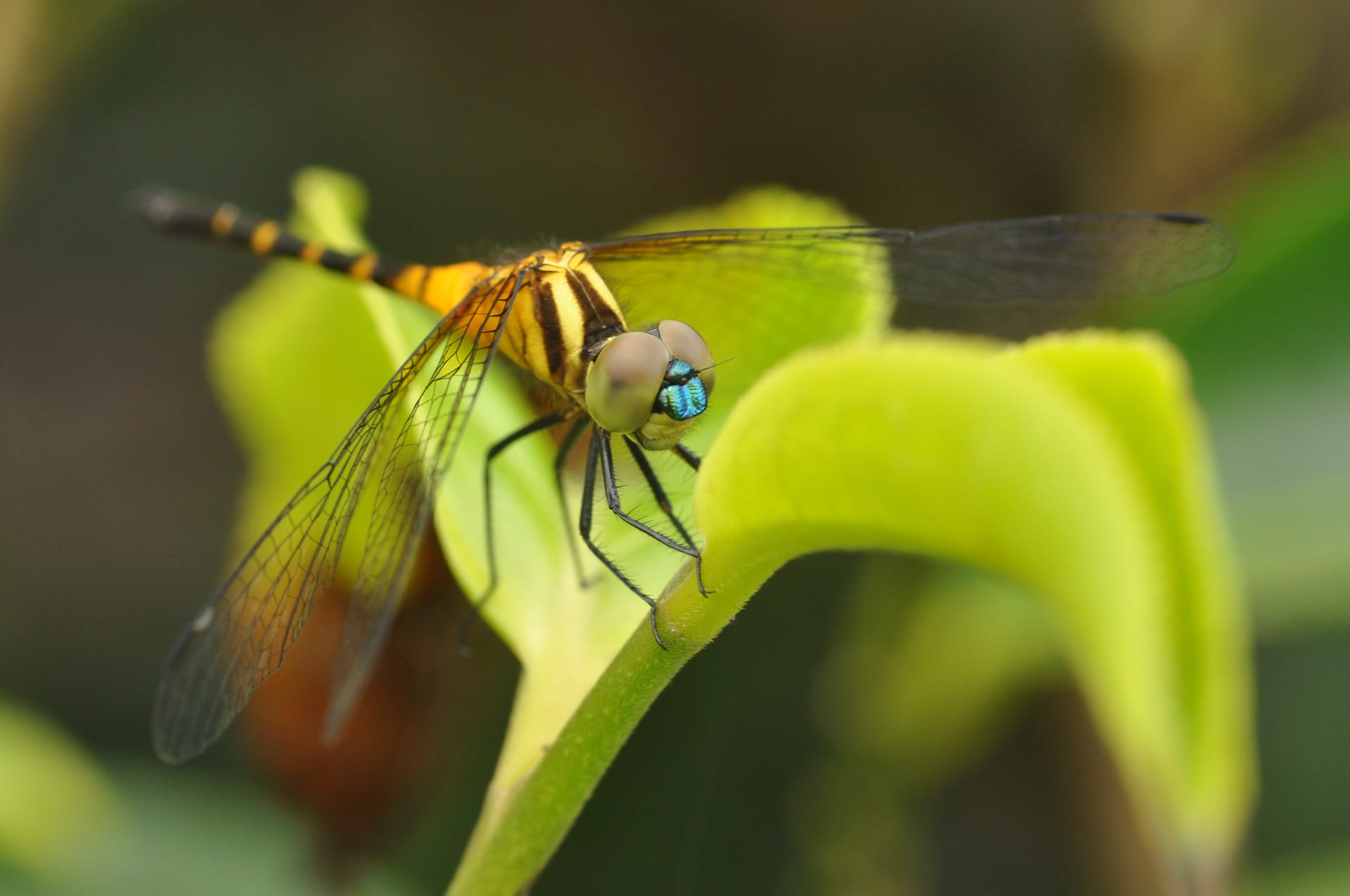 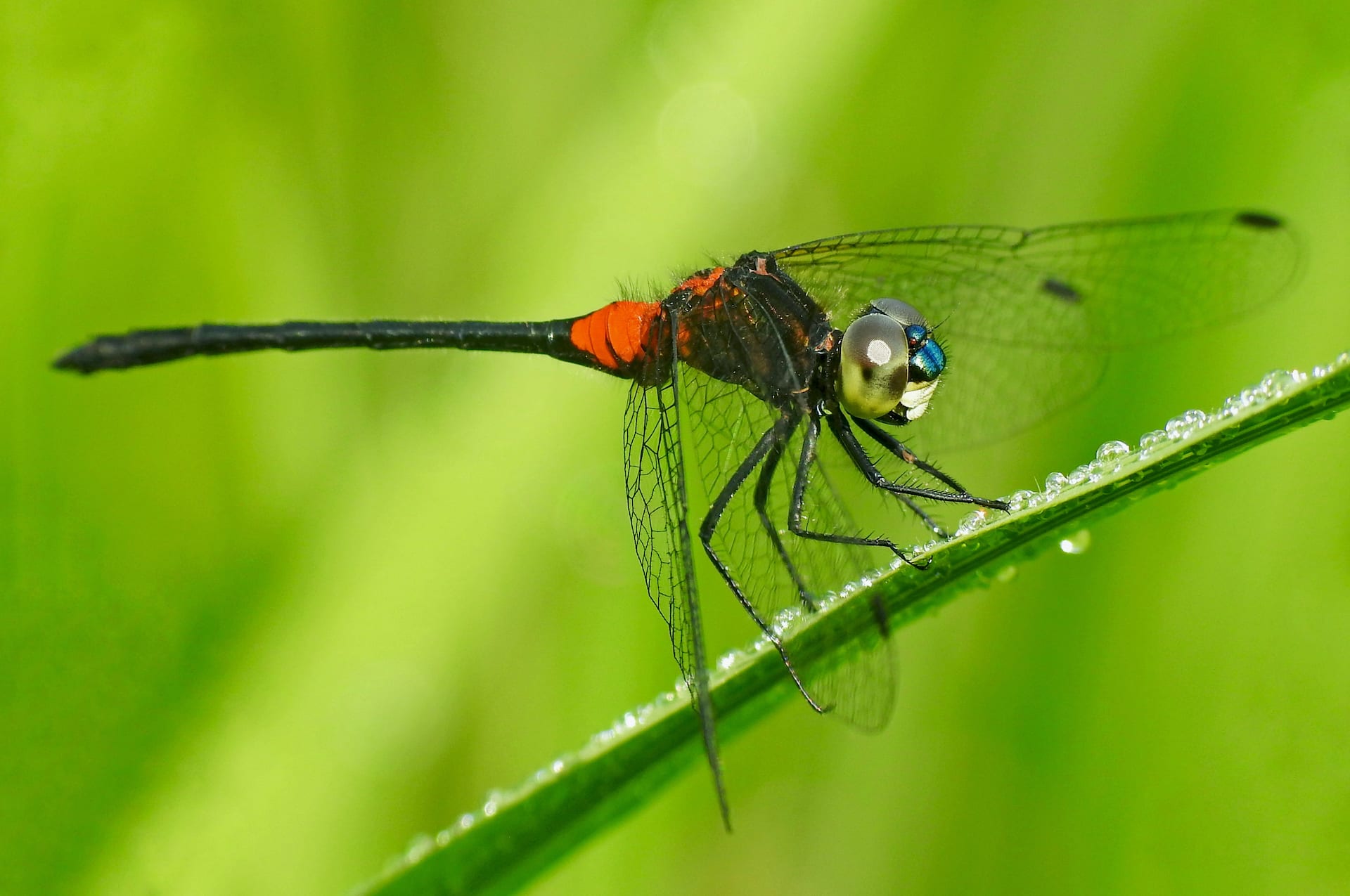 Dragonflies and damselflies belong to the insect order Odonata and display some differences in structure and behaviour. Dragonflies are robustly built and are strong fliers, while damselflies are of lighter build and have weaker flight. This is why many people like to use the collective name odonates for them, but more commonly, the name dragonfly applies to both types. The ruby-tailed hawklet, our protagonist, is endemic to the marshes and pools of the Western Ghats. The species is highly seasonal and can be seen in flight from May to September only. Where do they go during the rest of the year? Well, like all dragonflies, they are amphibiotic and live as aquatic nymphs before they sprout wings and become flying dragons. This is one of the reasons why dragonflies are good indicators of ecosystem health — they need land and water of optimal quality for their survival. Also, they are colourful, easily observable and show moderate diversity of species that make their study relatively undemanding. Dragonflies also play an important role in the food web as predators of smaller insects and as prey for small animals.

My next encounter with the ruby-tailed hawklet was even more surprising and happened when I was visiting my friend’s house in Tholpetty, a small town in the heart of Wayanad Wildlife Sanctuary. We were on a casual stroll along the paddy field in front of his house when a lone male ruby-tailed hawklet popped up in front of us. His matte black and bright red stood in sharp contrast to the greenery of paddy stalks. All around him, drops of dew sparkled in the morning sun. What a mesmerising sight! As before, he obliged me with some close-up shots.

Wayanad is a land where wild creatures show no respect to the boundaries drawn by humans. Deer, boar, and even elephants visit the same paddy field to take their share. Farmers burn the midnight oil to keep at least a part of their yield safe. Later that day, we saw some farmers dedicatedly spraying insecticides in their fields. They were probably unaware of the dragon that had flown in from the forest to save their crops from insect pests. They cannot be blamed, however, as there is a dearth of studies evaluating the role of dragonflies as biocontrol agents in Indian farmlands.

A damselfy emerges from its final nymphal stage. It is delicate, sans colours, and is known as a teneral at this stage. The nymphal case or exuvia, that is left behind is proof that the species has completed its lifecycle in the waterbody. Photo: Vivek Chandran A

IUCN categorises the ruby-tailed hawklet as a species of “Least Concern”. However, we should be concerned that our dragonflies are poorly studied, despite being ubiquitous and attractive. Many of their habitats, which they share with myriad other creatures are threatened due to developmental activities. For instance, multiple hydroelectric projects are under consideration in the Vazhachal Forest Division, all of them requiring submergence of forest land. Hence, the time is ripe to train our binoculars and cameras on these little dragons. Their various kinds and numbers can tell us about our environment. Besides, they’re a treat to our eyes!

is a birdwatcher turned 'odonutter' currently studying the odonates of Kole wetlands, a Ramsar site in Kerala.