Russell’s Vipers: Predators of the Undergrowth

A radio telemetric study explores the life and behaviour of this elusive, cryptic and hugely misunderstood snake

Peering carefully into the scrub in front of us, we try to pinpoint the source of the radio signal beeping on our receiver. There’s hardly 15 cm of vegetation on the ground and it takes us a couple of minutes to spot the telltale patterns of our subject — T18, a male Russell’s viper that measures nearly a 140 cm in length.

Over the first eight months of 2019 we followed eighteen Russell’s vipers (Daboia russelii) around the patchwork of fields and plantations that surround Rathnapuri village near Hunsur in Karnataka. We’ve caught snakes from fields and farms, brought them to our base, surgically implanted radio transmitters into them and released them exactly where we found them. 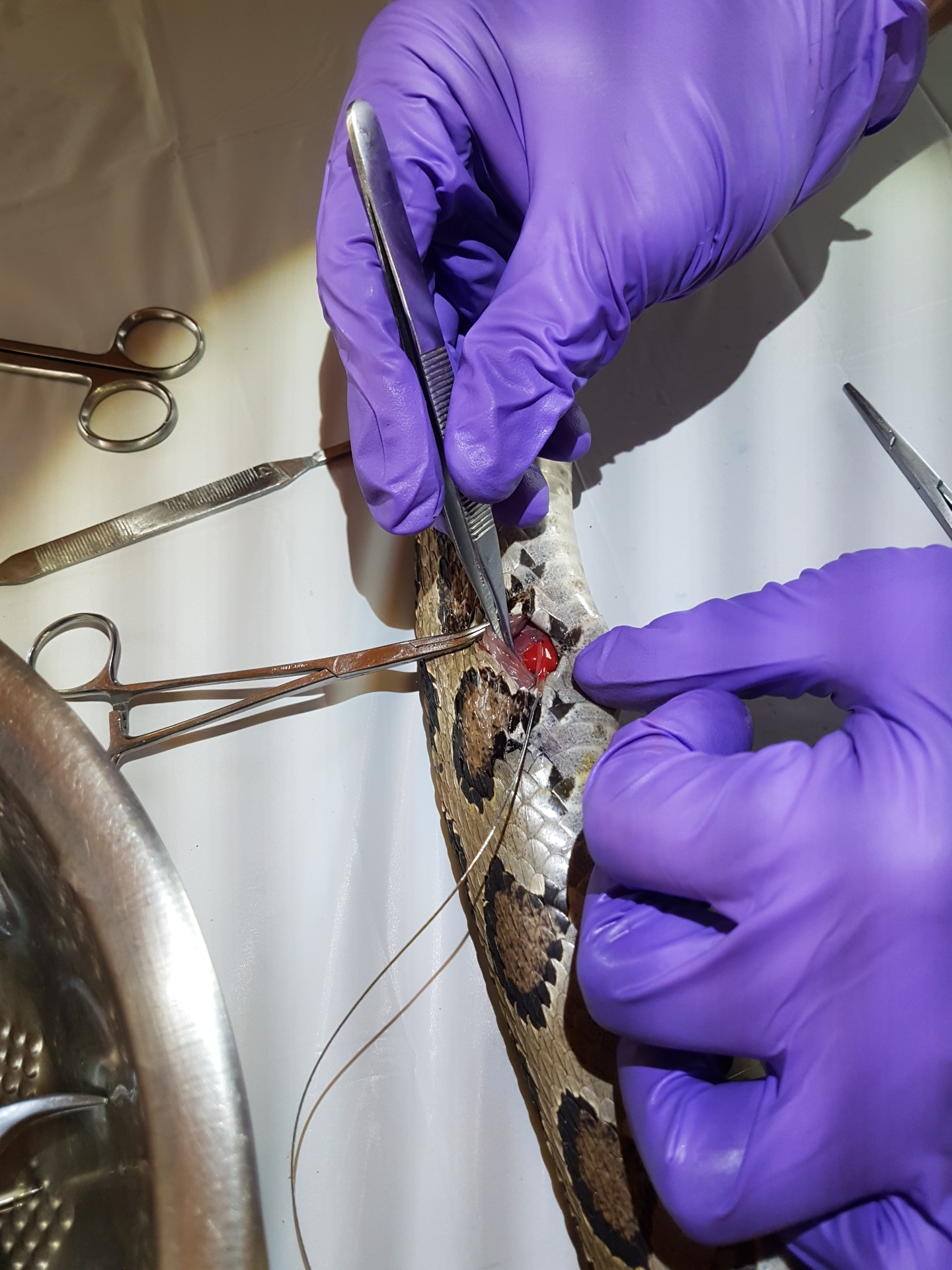 The installation of a tiny transmitter will enable researchers to follow this snake for almost three years. Photo: Gerry Martin Although it has a striking pattern, the Russell’s viper blends into the ground so well it is incredibly difficult to spot, particularly in its favoured habitat of grassy open farmland. This large adult was spotted in the North Canara district of Karnataka. Cover Photo: Omcar Pai

Russell’s vipers are, conceivably, the most maligned, reviled and feared species of snake found in India. In my experience, people will tolerate any other species, but, when it comes to Russell’s vipers, they draw the line.

Russell’s vipers are incredibly good ambush predators, staying absolutely still until they need to strike at their prey. This adaptation makes them exceedingly difficult to spot, and people frequently step on them while working in their fields and plantations. 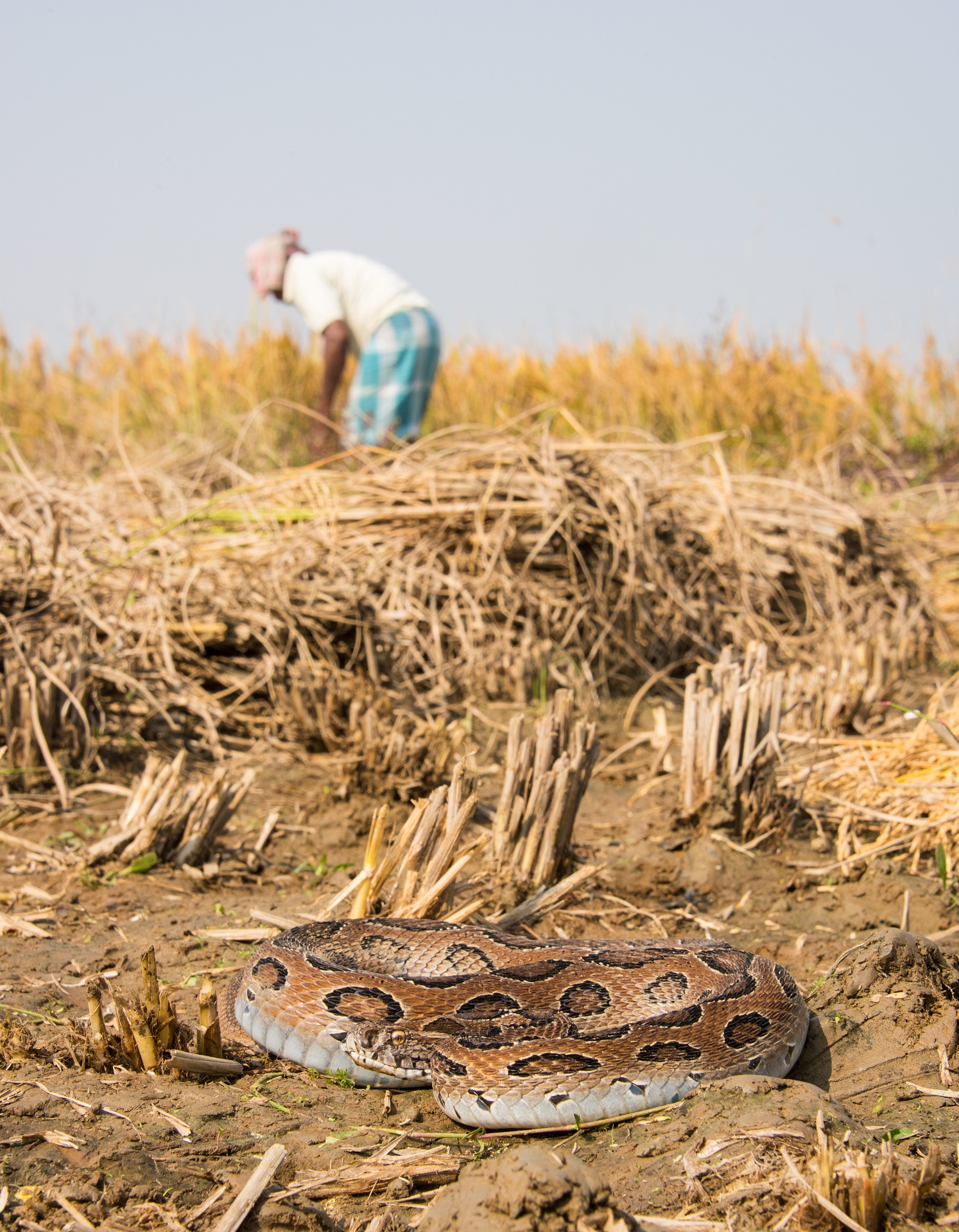 Harvesting season puts snakes and people in dangerously close quarters. A Russell’s viper will freeze when it senses danger, and therefore is more likely to be accidentally stepped upon. Photo: Wolfgang Wuster

The Russell’s viper has one of the most advanced venom dispatching mechanisms in the snake world. Like all vipers, they have long, hypodermic needle-like, hinged fangs in the front of their mouths. This enables them to inject venom very efficiently with just a jab, as opposed to having to cling on to their prey. It also enables them to safely tackle large prey.

Their venom is a cocktail of toxins, primarily attacking blood and tissues, making the bitten animal internally bleed out rapidly. It also contains various cytotoxins, destroying cells, resulting in necrosis and major tissue damage in larger victims. This has given rise to numerous myths: one claims the snake’s breath can cause leprosy, another says even touching it makes your flesh rot, and so on.

The Russell’s viper has a blunt rounded snout and large curved fangs with which it is believed to inject about 75 per cent of its stored venom into its victim. Photo: Gerry Martin

Truth is these snakes are actually very reluctant to bite. They tolerate being approached and sometimes, even being stepped on. One of our tracked snakes was found about 20 cm from the feet of a goat herder collecting leaves for her goats. Another hadn’t moved for weeks despite being right next to where someone had done their ‘morning business’ while the snake was right there!

Why then are there still so many bites from this species? To begin with, we believe that there are a lot more Russell’s vipers around than we think. In the ten months that we’ve been following our snakes, we’ve been called over forty times to move Russell’s vipers from within the study area. Of all these calls, only one was because someone had seen one of our snakes. A coconut plantation owner who has two of our tagged snakes on his property at the moment told us that he killed eight Russell’s vipers last year while clearing up one pile of coconut fronds, in just one morning.

So it would seem that the number of bites that do occur would be much higher if this species was more inclined to bite than to hide. The bite cases that we’ve come across have almost invariably been when people have stepped hard on the snake.

Although capable of striking incredibly fast, studies have shown that Russell’s vipers are actually hesitant to bite and will try to hide from or hiss loudly towards a potential threat. Photo: Gerry Martin

On the flip side, having that many Russell’s vipers around is definitely good for farmers. Few other species seem to occur at these densities and the number of rodents that Russell’s vipers are eating is significant. We’ve found that the species eats more regularly than we had previously thought and takes rodents of all sizes. An adult Russell’s viper will eat any rodent that comes by from tiny field mice (Mus species) to large lesser bandicoots (Bandicota bengalensis).

After a big meal they generally try and get as much basking time as they possibly can to help digest their meal. We’ve seen some snakes totally gorged on prey that may seem far too big for them. One in particular comes to mind: an approximately 40-cm-long female Russell’s viper that had eaten an adult palm squirrel (Funambulus palmarum) and could barely move.

This is probably because they need to be as opportunistic as possible, since they wait in ambush for prey to come by. They are also known to feed on ground-feeding birds. So far, there are no reports of them feeding on reptiles or amphibians, although, these are quite possibly included in the diet of juveniles.

Interestingly, the species seems to be on the menu for a lot of predators from various birds of prey to spectacled cobras. There are numerous reports of cobras eating Russell’s vipers and we believe that two of our snakes might also have been eaten by cobras as we only found the transmitters left behind where the snakes had settled.

This study has been quite revealing and we’re looking forward to understand more about this elusive, cryptic and hugely misunderstood snake.