Basking in the sun, the saltwater crocodile is a study in stillness but once it enters the brackish waters of the Sundarbans, it is the top aquatic predator

When the diesel-powered engine of our rickety, wooden bhotbhoti boat revs up in the Sundarbans, its loud, hammering “bhot-bhot-BHOT” sound echoes through the silent mangrove forest. As we ride noisily along sea-green channels, a chital spots us from a distance and scurries into the mangrove thickets. A lesser adjutant stork on the sandy shores takes flight in alarm. But one creature remains unperturbed by our presence — the enormous saltwater crocodile (Crocodylus porosus).

We spot our first one within a few hours of entering Sajnekhali Wildlife Sanctuary, a protected area within the Sundarbans Tiger Reserve. It’s a slow December morning and the tide is low. The waters have receded to reveal wet, glistening shores with spike-like pneumatophores jutting out of the sand. On an exposed bank, a large saltwater crocodile is sprawled — caked in mud, and still as a statue. Despite our motorboat’s ample warning, it doesn’t bat an eyelid. I observe its armour-like scaly skin, the bony ridges on its jagged back, and massive tail. With two rows of triangular spikes the tail is used to propel the creature out of the water. Its jaw is shut tight, but pointy yellow teeth jut out, making it look like it’s grinning, or perhaps, mocking us. “It’s smiling at you,” laughs Ramkrishna Mondal, my guide. We spot several more saltwater crocodiles — all suspiciously still.

The saltwater crocodile is a skilled aquatic predator. Its eyes are adapted to see underwater, and it has excellent night vision so the nocturnal reptile can hunt at night. Photo: Soumyajit Nandy
Cover photo: The channels of the Sundarbans harbour a healthy population of the estuarine or saltwater crocodiles which thrive in this unique ecosystem. Cover photo: Arindam Bhattacharya

The saltwater crocodile is the largest and heaviest living reptile in the world. Males can grow up to 20 feet and weigh over 1,000 kg. The largest one recorded in India, in Bhitarkanika National Park, Odisha, was 22-feet long. Its skull is displayed in the national park’s museum. Anecdotal information places the largest known saltwater crocodile from India in the Sundarbans. In his book, The Last of the Ruling Reptiles: Alligators, Crocodiles, and Their Kin, WT Neill writes about a “Bengal Giant” — a saltwater crocodile he saw towards the end of British rule, which he claimed was at least 30-feet-long.

The species is distinguished from its cousins — gharials, muggers, caimans — by its high tolerance for salinity. Unlike other freshwater species, the saltwater crocodile thrives along brackish mangrove channels (though it is also known to inhabit freshwater habitats) and can swim far out to sea. In the Sundarbans, it is the top aquatic predator, beating serious contenders such as the river shark, king cobra, python and semi-aquatic Bengal tiger. Saltwater crocodiles are not picky eaters and will feed on anything they can get their jaws on — fish, birds, buffaloes, wild boar, rhesus macaques, deer, crabs, even snakes. In water, it can even overpower a swimming tiger. In 2011, an instance of a tiger killed by an estuarine crocodile was reported at Dobanki camp of Sundarbans Tiger Reserve. “Some forest officials who saw them fight claim that it was the most ferocious battle in the history of the park,” says Mondal. But these crocodiles don’t pick a fight unless absolutely necessary, he adds. They are ambush predators and mostly lie low. They often lurk on the river’s edges, with only nose and eyes, located atop the skull, above the surface. When an unsuspecting prey stops by, the crocodile explodes out of the water, grabs and snaps its neck, drags and drowns it, before eating it. Though a crocodile has strong jaws, it cannot chew well. Instead, it violently rotates its body in the water with the prey firmly in its mouth, dismembering it. The infamous “death roll” is now a popular television trope on sensational wildlife shows. About thirty minutes later, I see another saltwater crocodile basking by the exposed, umbrella-shaped stilt roots of a garjan — oblivious to the squeals and furious clicking from neighbouring tourist boats. 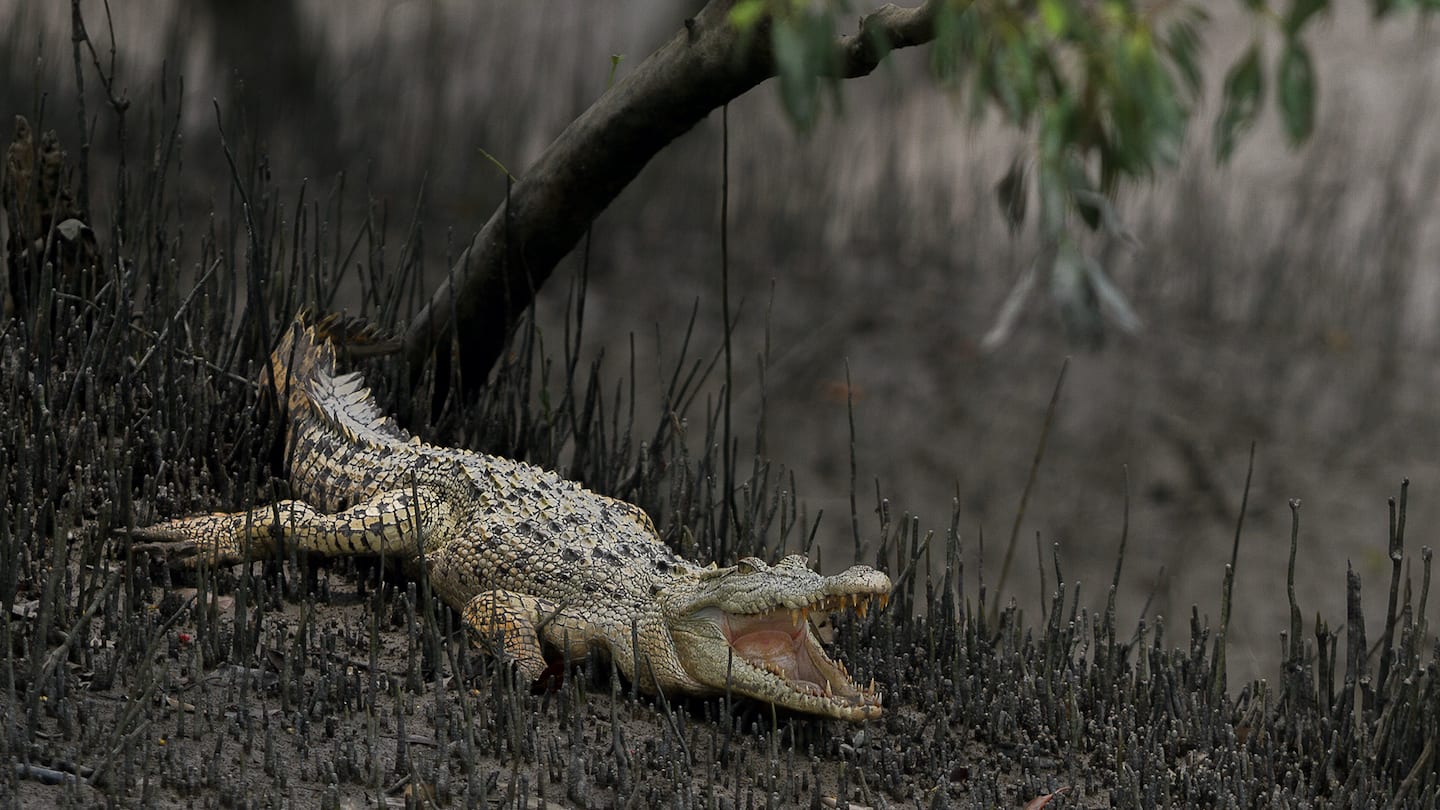 Rare leucistic saltwater crocodiles or albino crocodiles are occasionally spotted in the Sundarbans. The white hue is a result of a partial loss of pigmentation. Photo: Soumyajit Nandy

Creature of the tide

Later, over a phone call, expert wildlife biologist BC Choudhury explains why we saw so many crocodiles that day. Crocodiles are cold blooded reptiles that thermoregulate by sunning themselves. Adults need to maintain a stable body temperature in the preferred range of 30–32 degrees C. In the summers, crocodiles bask in the morning and evening — retreating to the water when the sun is sharp. But in winter, they bask from morning until the sun sets, warming their bodies as much as they can, Choudhury expands.

However, in a forest that is swallowed by tides twice a day, they wait for that ideal combination of low tide and great sunlight, and make the most of it. We had been lucky to catch them on such a perfect day. No wonder they were everywhere. “The life of a saltwater crocodile, and everything that lives in the Sundarbans, is ruled by the tide,” Choudhury reminds me. In 2012, he conducted the first and only survey on saltwater crocodiles in that habitat, with a schedule that depended heavily on the tides, and the tiger. It is impossible to travel through the Sundarbans after sunset, when a tiger may use the cover of the night to attack. The researchers identified that the mudflats are exposed for six hours a day in January, since that’s when the crocodiles spend the maximum time basking on the shores.

Of gods and myths

Back on the boat, a mighty saltwater crocodile has caught our attention. As we approach the panchmukhani mohona, a confluence of five channels, we see yet another one, basking on a sandbar. It’s the largest I’ve seen yet — a dominant male, says Mondal, easily 17-18 feet-long. “Meet Kalu Khan,” he says pointing at its left, front foot which is missing a toe. “It is so big, that local guides named it after the demi-god Kalu Rai. He lost his toe several years ago,” he adds.

Travelling through the Sundarbans I notice a deep, intertwined relationship that local cultures share with the wilderness. Mondal tells me how most fishermen and honey collectors who venture into the forest, pray to Kalu Rai, the crocodile god, to keep them safe from the crocodile. The forest is watched over by Bonbibi, a goddess they believe protects locals from the Sundarbans tigers that are known to kill humans who venture into protected areas. I remember seeing the shrine next to the Sanjnekhali Forest Office Complex, with a statue of Bonbibi mounting a tiger, and a small statue of Dukhe, a young child sitting on a saltwater crocodile. As we watch Kalu Khan, Mondal tells me Bonbibi’s story. During a ferocious battle, Bonbibi rescues a young child named Dukhe from the clutches of Dakkhin Rai, a demon in the form of a tiger. She then sends him home safely on the back of her pet crocodile, Seko. “Is Seko worshipped too?” I ask Mondal. “No, only feared. Apart from the tiger, the saltwater crocodile is also known to kill fishermen,” he says. “Remember, dang-bagh, jol-e kumir,” he adds. (Tiger on land, crocodile in water.)

Honey collectors seek Bonbibi’s blessings before they embark on a collection trip through the Sundarbans. Many enter the forest on small dinghies and run the risk of being attacked by a tiger or a crocodile. Photo: Dhritiman Mukherjee

Few protected areas in the country seem to have the intense human-animal conflict evident in the Sundarbans. According to official figures, the Sundarbans tiger has claimed 12 lives in 2019 alone, but locals say the numbers are much higher. The lives claimed by the saltwater crocodile come a close second, followed by deaths by the river shark. According to data released by the forest department, between 1999 and 2009, at least 29 people were attacked by crocodiles. Studies reveal that most cases occurred in areas where tiger prawns are farmed, an occupation led by women and children. Women with saris tucked into their waists wade through water and pull nets on the edges of the rivers, and have fallen victim to crocodiles. Yet, human-crocodile conflict receives little attention from authorities compared to tiger attacks that make for big news. “We have a tiger-centric mindset. The saltwater crocodile remains in its shadow. Fewer conservation efforts focus on the wellbeing of this species, and little is done to mitigate human-crocodile conflict. Both humans and animals suffer,” says Choudhury.