A Lifetime of Love: The Romance of the Sarus Cranes

Sarus cranes mate for life, but they also express deep feelings of love, attachment, tenderness, anxiety, distress, and other emotions we associate with the human experience

We human beings pride ourselves on being sentient animals, with the ability to feel, think, love, emote, learn, and adjust to exceptional signs of pain, sadness, and anxiety. The dictionary defines sentient (adjective) as “having the power of perception by the senses”, or “characterise by sensation or consciousness”. Most people think that animals are not sentient, but recent researches show this is not true.

New behavioural researches on different taxa tells us that many animals are capable of experiencing the same range of emotions as we do. So, why can’t they have emotional feeling of love?

Perhaps one of the best examples is the sarus crane. It is one of the largest cranes of the world and the tallest flying bird in the world. There are two subspecies of Sarus in the world: Antigone antigone antigone found in the Indian subcontinent, including Myanmar, and Antigone antigone sharpii, found in southeast Asia and northern Australia. The Indian subspecies of sarus crane was hunted out in Pakistan and Bangladesh and now survives in India, Nepal and Myanmar. Perhaps 10 to 12 thousand live in India. After watching a pair for hundreds of hours — with my student when he was writing his MSc dissertation in Aligarh, and more recently, when I took up a project on sarus for the Uttar Pradesh Sarus Protection Society — I found that their filial love is as strong as in human beings, perhaps stronger.

For instance, sarus cranes often make vocal calls together, termed a “unison call”, in scientific language. One starts, generally the male, while the other finishes in a way that makes it hard to know when the vocal changeover has taken place. Sometimes, both start and finish together. It is like the conversation of a loving, long-married human couple that finishes each other’s sentences.

It is not unusual to fall in love with the subject of your study, as I have fallen in love with all the birds and animals that I have studied. The sarus crane is no exception. It is a delight to watch a pair, standing side by side, preening or doing nothing, occasionally letting out a unison calls to reassure themselves of their mated status. A sarus walks, forages, rests, sleeps, and flies with its mate. Even when they are in a flock, as it happens in winter and summer after the breeding season is over, pairs keep to themselves with their juveniles. They exhibit marital love, caring, attachment, and bereavement, much like human beings experience.

It is a well-known fact that sarus pair for life. Their commitment to mates is part of legend, mythology, folklore, and songs; old Mughal and Rajput paintings always show a pair of sarus or a flock, rarely a single crane. 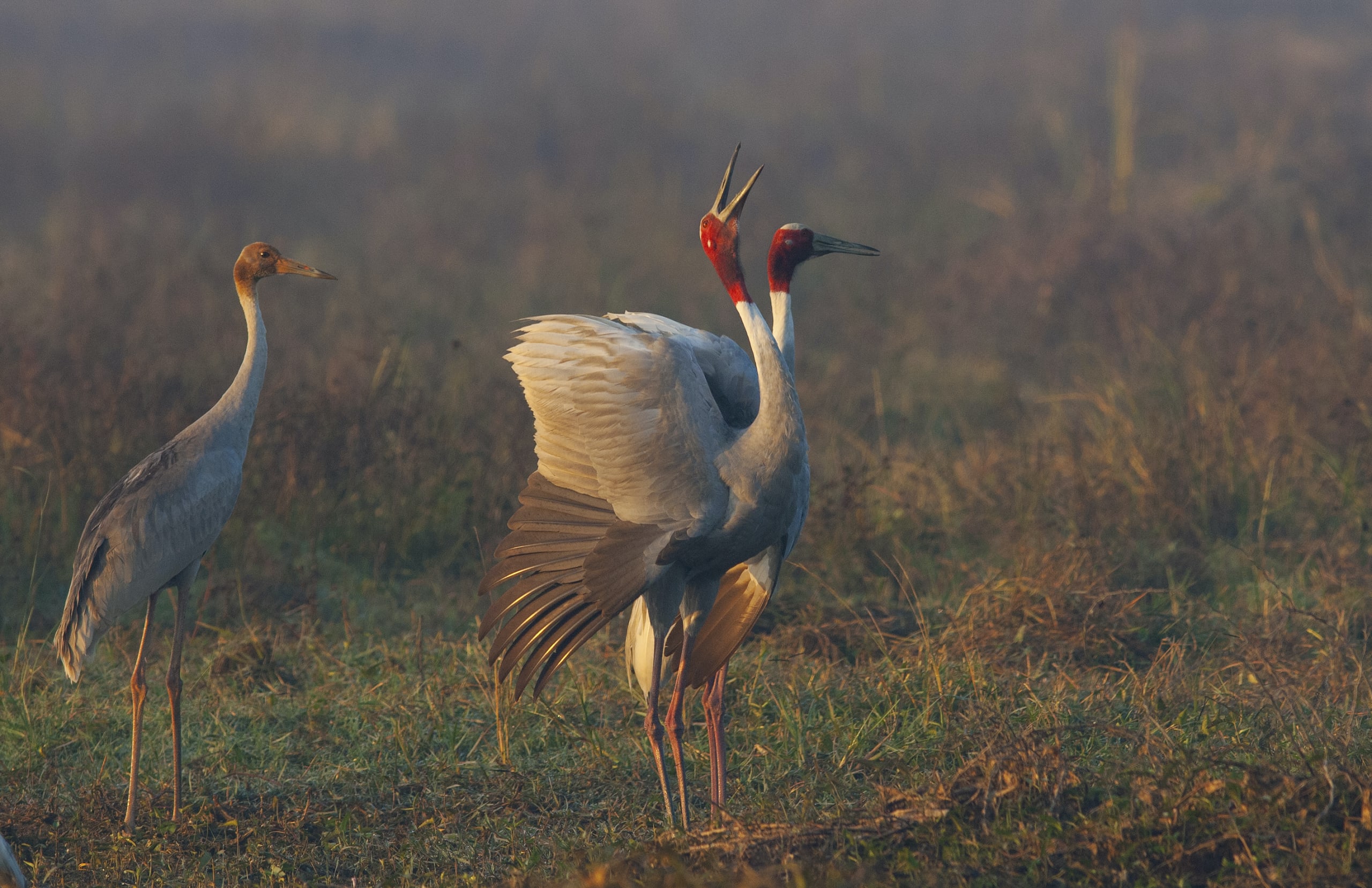 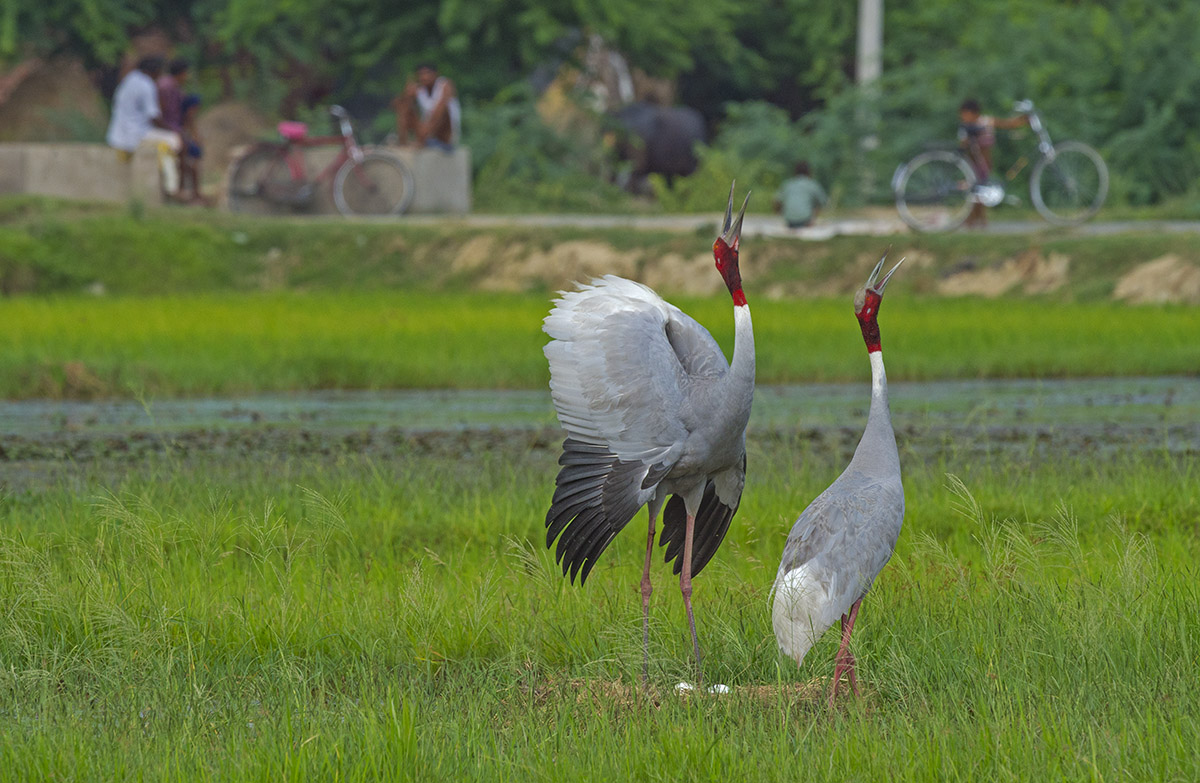 Top: At just over five feet in height, the sarus crane is the tallest flying bird in the world. It looks even taller when it stretches its neck, spreads its wings, and emit loud, shrill trumpeting calls. Above: Sarus cranes are known to live comfortably around human populations. In Uttar Pradesh, they are seen living in open, cultivated fields as well as local marshlands and ponds. Cover Photo: The sarus crane (Antigone antigone) is easily recognised by the naked, blood-red patch on its neck and head, and beautiful grey plumage. The bare red skin turns brighter during the breeding season that falls during the heavy monsoons.

My hours of observation showed that in a flock, the individual distance between a mated pair is less than unmated individuals, or with other mated pairs. Couples tend to keep to themselves, and pairs with juveniles also keep to themselves, even when congregating in a large flock of 50-80 individuals, which happens in common foraging grounds. Unlike migratory ducks, geese, waders and some passerines that exhibit flock cohesiveness, this is not so apparent in sarus cranes. When disturbed, pairs may separate from the flock and fly in different a direction.

All activities are shared by a pair — nest selection, nest building, nest repair, incubation and chick-rearing. I would say one of the most delightful experiences of my natural history observations, has been to watch a sarus pair starting a family. If their habitat remains undisturbed, they tend to return to the same wetland for breeding. We call this “site fidelity”, and is seen in many large, long-living birds such as cranes, storks, eagles, owls, petrels, albatrosses, and bustards.

Once a site is provisionally selected — a shallow undisturbed marsh, or a crop field with standing water — the pair spends time roaming around the site, as if considering the pros and cons of their choice. Once they are satisfied, the process of nest-building starts with patting down the existing vegetation. More vegetation is collected from the surrounding areas to build a mound higher than the surface of the water, and dry vegetation is piled on top to keep the nest dry. The mound has to be strong enough to bear the weight of both parents as many times unison calls are performed standing atop the nest.

Soon after, one or two eggs are laid, which are incubated by both parents, though the female plays a greater role. It takes 27-30 days for the chick to hatch so the nest-mound has to be frequently repaired and reinforced, as the vegetation tends to decompose in water. The partner brings a twig or stick, while the incubating bird methodically places it, knowing where it is required.

Unlike the graceful adults, chicks have buff, cinnamon-coloured feathers, with a distinctly grey ear-patch.

Hatching of a chick is a joyous occasion, greeted by frequent unison calls, sometimes with both parents standing on the nest. It is like a child birth in a family, accompanied by tenderness and gentle, affectionate touching of chick. Over the next few weeks, the fragile young one is cautiously provided food, huddled under the wings of parents during rains, and shaded in harsh sunlight. It is so human like, and there is never a dull moment.

While adult sarus cranes can ignore a fox, a crow, or an eagle as they cannot harm them, these very animals set of an alarm during breeding season. A sarus chick is precocial, i.e. it is hatched with eyes open and is able to walk within 24 hours once it is dry. However, it is kept on the dry nest for 2-3 days, and then taken to more vegetated parts of the marsh to keep away from predators.

The best and most nutritious food is given to the growing chick by both the parents. Once it is old enough to fly, the juvenile accompanies its parents around the marsh, and from field to field. The juvenile(s) lives with parents for more than a year, learning survival tactics and how to find food. Until the next breeding season, when they leave the parents to flock with other youngsters, and eventually fall in love: it is like the start of a Barbara Cartland romance novel.