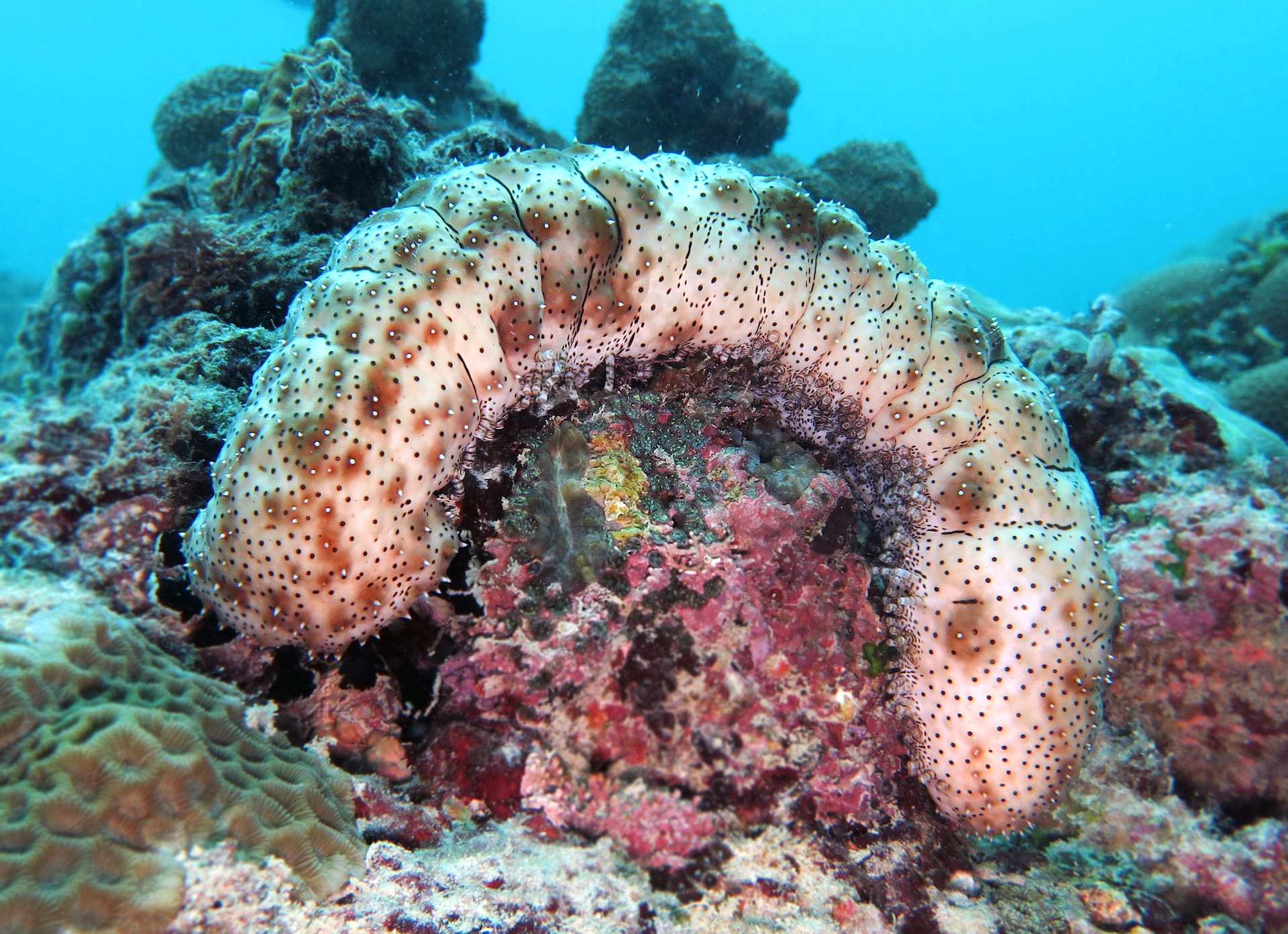 Imagine you are swimming out at sea and find a fishing boat slowly dragging a net filled with animals across the seafloor. By diving underwater on a single breath, you have enough energy and time to save one out of two animals that are partially caught in the net. You must choose between a juvenile shark and a sea cucumber.

Consider this is an oceanic equivalent of the burning building thought experiment to examine how people decide which animals are important and valuable. Who would you choose to save before the net disappears, the shark or the sea cucumber?

Let us evaluate the choices. Sharks use electroreception to find prey, their skin is lined with dermal denticles that give them killer speeds. They are indispensable predators in all the ecosystems they inhabit, and many species are nearing extinction. On the other hand, sea cucumbers are important because…err…wait a minute…what do sea cucumbers do all day? Do they even have a role in the grander scheme of things? All surprisingly common existential questions being faced by the sea cucumber community.

Sea cucumbers are the seemingly uncharismatic cousins of the sea star within the phylum Echinodermata — radially symmetrical, hydraulically powered ancient invertebrates. They are vegetable-like and generally remain still when not otherwise moving sluggishly. They are also constantly pooping. What’s not to love about these creatures, correct?

(Left) In the absence of tube feet, Synaptula sp. look more like a worms than sea cucumbers. Their ring of feeding tentacles, however, are a giveaway. (Right) If you ever see a blackspotted sea cucumber standing up tall, a rather unusual stance for these cylinders, you are probably witnessing a spawning event and are likely to see them release their gametes into the water.
Photos: Vardhan Patankar

Here are five reasons to be absolutely amazed by sea cucumbers, and even start your own Sea Cucumber Appreciation Society.

#1 With mouthparts made of feet, they breathe through their behinds

Sea cucumbers use rows of tube feet to move, but over evolutionary time some tube feet evolved into a ring of tentacles to help them scoop detritus off the seafloor. Another evolutionary plot twist comes in the form of a sea cucumber’s respiratory tree. These are branched organs on either side of their digestive tract that perform the function of gas exchange from water coming in through the posterior end. In other words, a sea cucumber breathes oxygen from water it draws in from its anus!

Sea cucumbers sometimes appear rock-solid and at other times as soft as playdough. It is also common to see large sea cucumbers comfortably tucked into unusually narrow crevices. This trait is made possible by the collagen fibres or “fibrils” that line its body wall. Unlike the collagen found in human beings, the collagen tissue in sea cucumbers can transform rapidly, allowing them to go from being completely stiff to a mass of molten jelly in an instant. This is useful not only to protect them from predators but also to ooze into hard-to-get-to nooks and crannies. 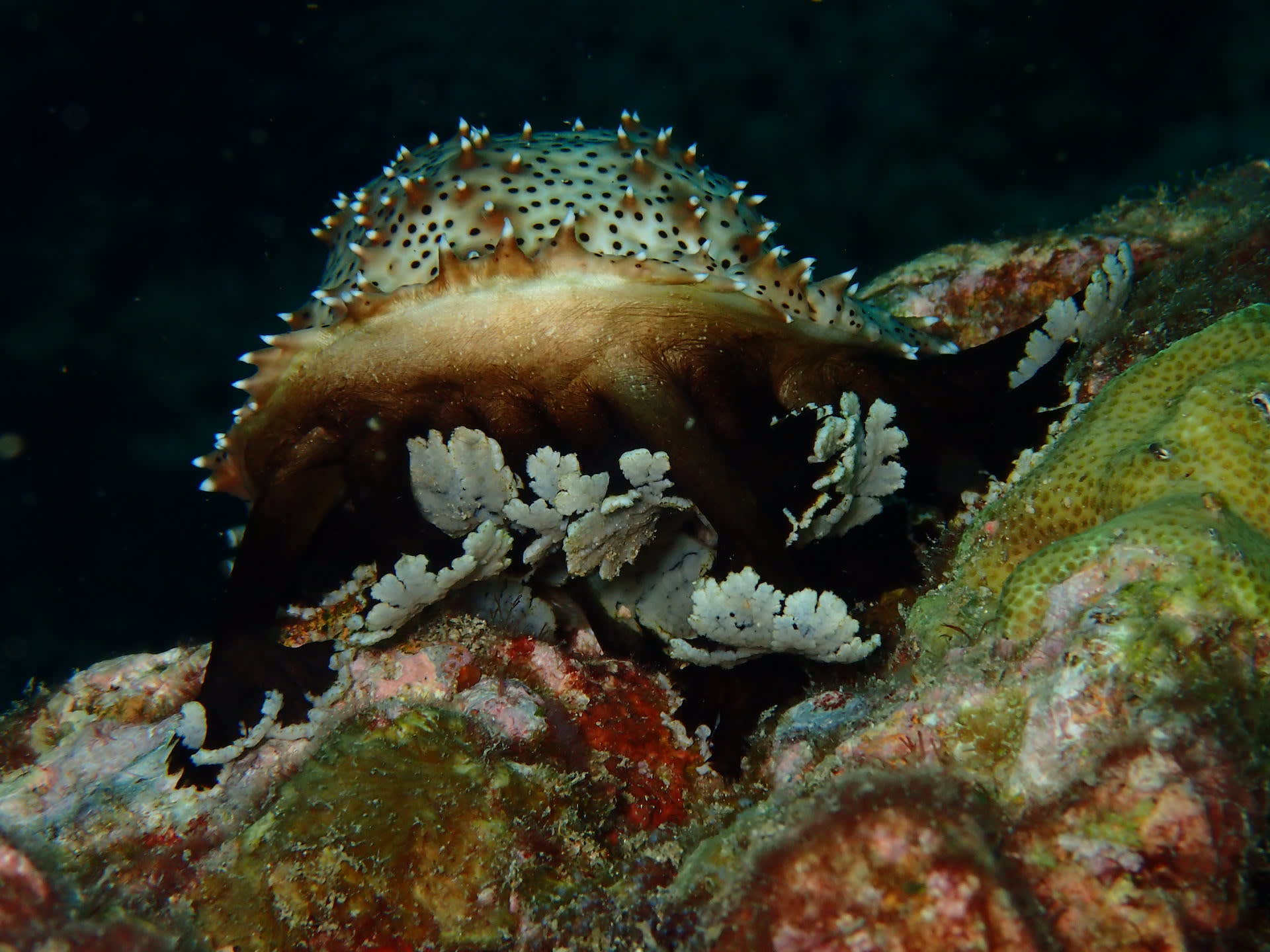 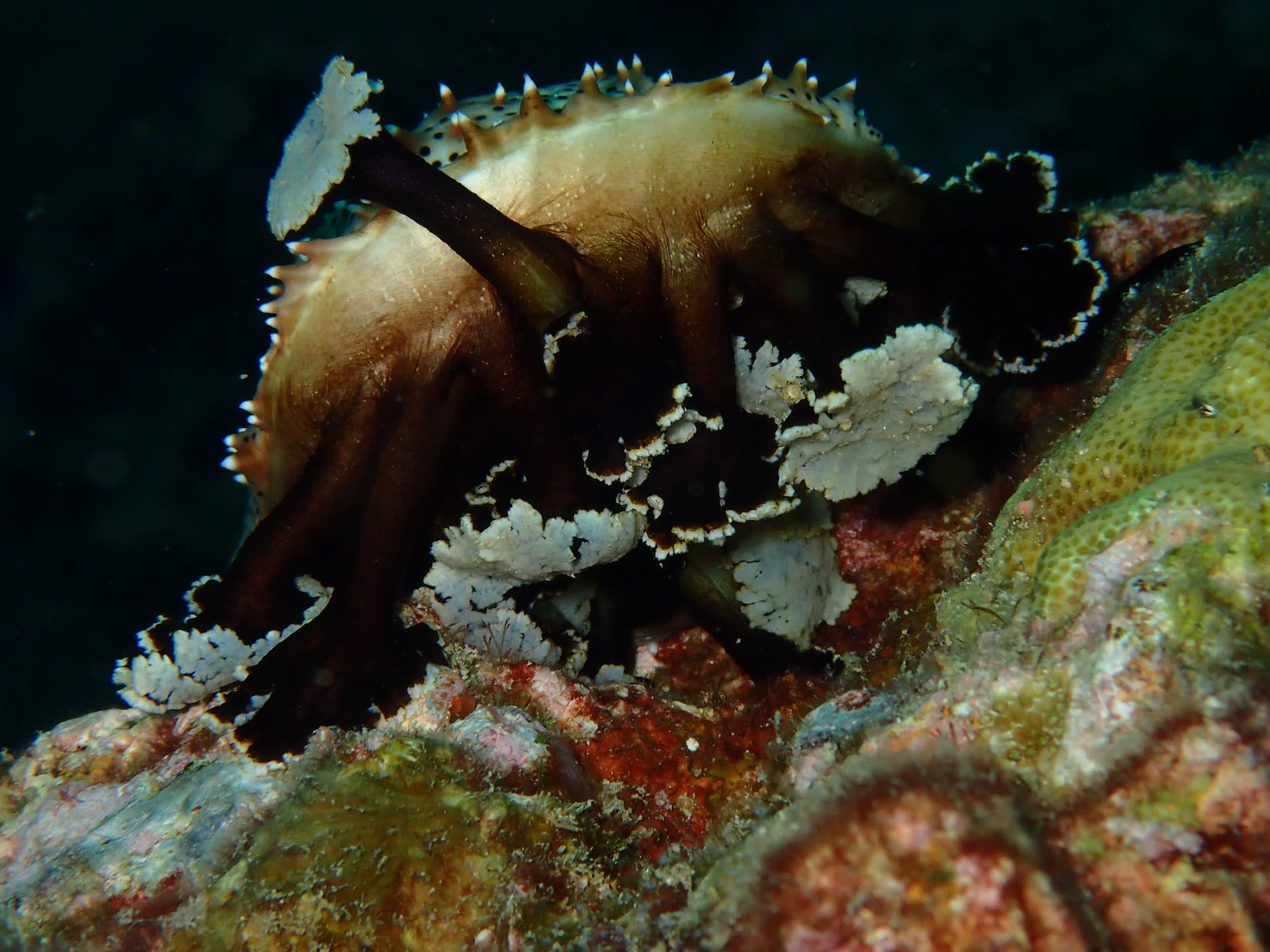 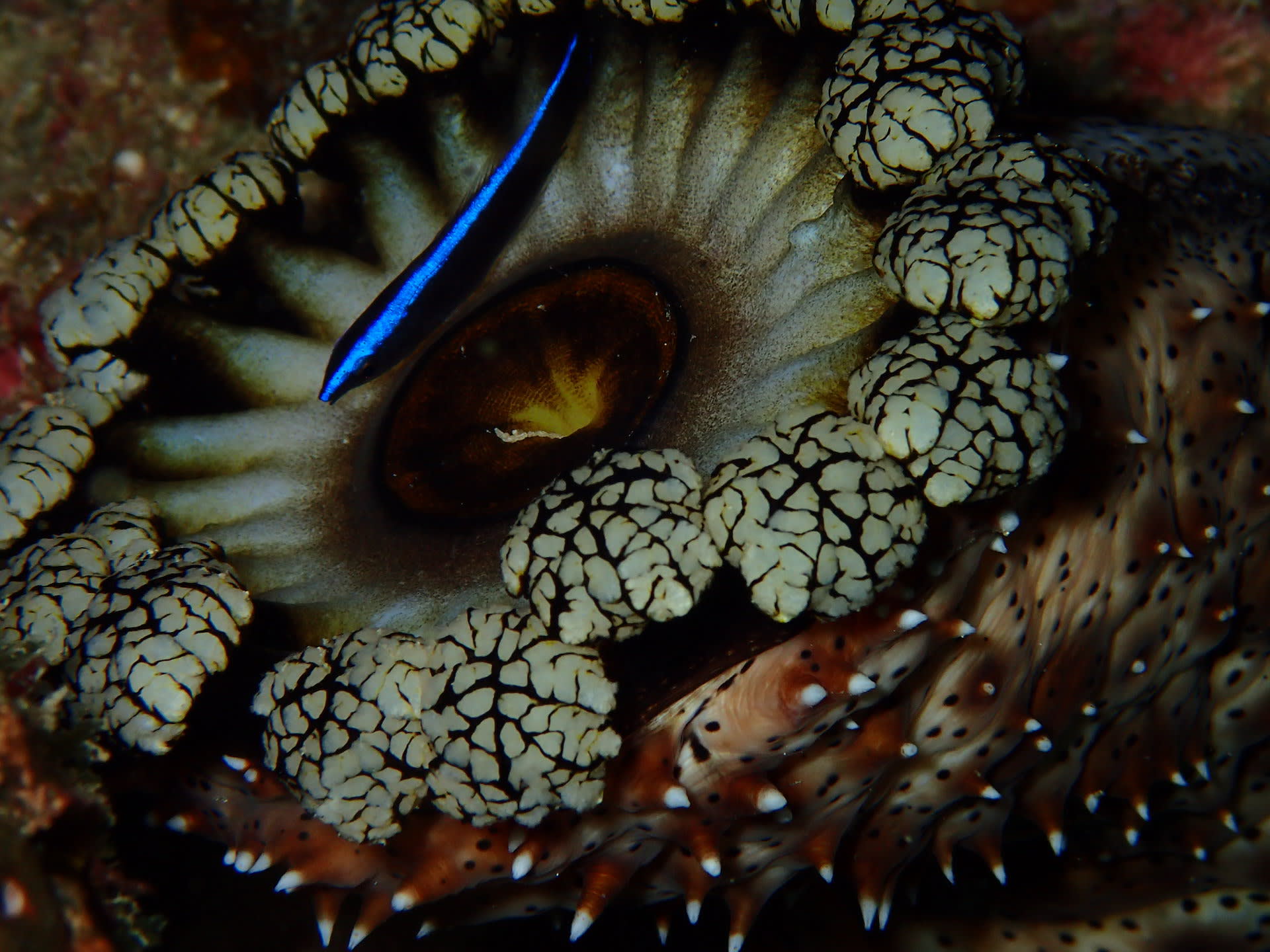 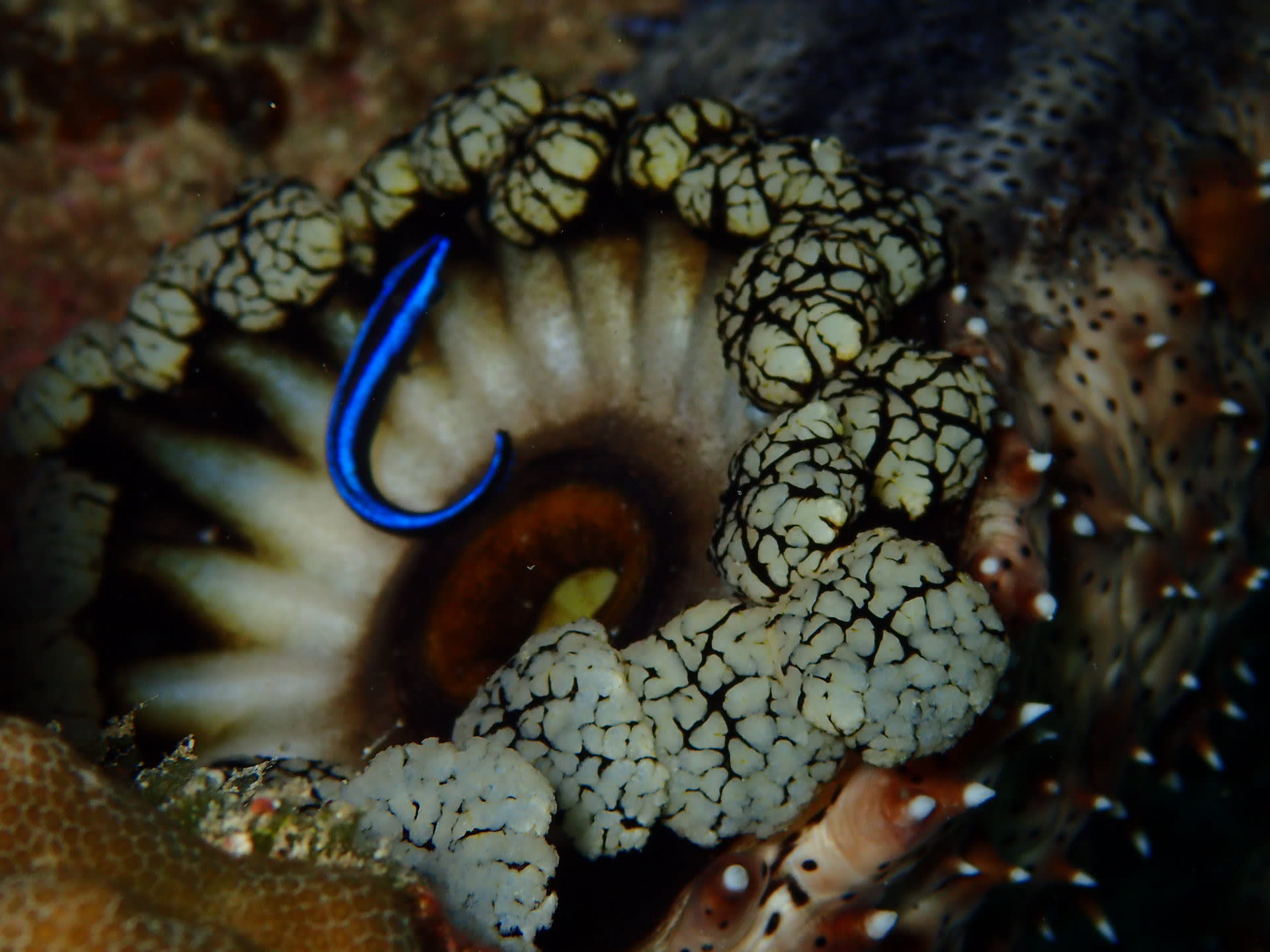 A blackspotted sea cucumber feeding on organic matter, occasionally takes a break to have its tentacles and mouth inspected by a cleaner wrasse. Photos: Sahil Lokhandwala

The textbook sea cucumber looks exactly like its vegetable namesake — cylindrical and almost identical on both ends. Like most textbook diagrams, there are several exceptions to this rule in nature. Not all sea cucumbers are sluggish, and some have no tube feet at all. Pelagothuria natatrix is a free-swimming sea cucumber found in the open seas and Enypniastes eximia lives kilometres deep in the ocean. A few species of solitary sea cucumbers stay buried with only branched tentacles sticking out of the sand like bonsai trees, while some deep-sea species move in herds as they comb the bottom for food.

A lone sea cucumber sometimes resembles a mini ecosystem, what with the numerous smaller animals that call it home. The body of a sea cucumber is a delectable platter for small commensal animals such as ghost gobies, cleaner shrimps, crabs, and polychaete worms that feast on particulate matter, parasites, and dead tissue. Pearlfish are more intimate in their relationship. They live inside the cloaca of sea cucumbers where they take shelter and gain constant nourishment from particles their host expels after digestion. 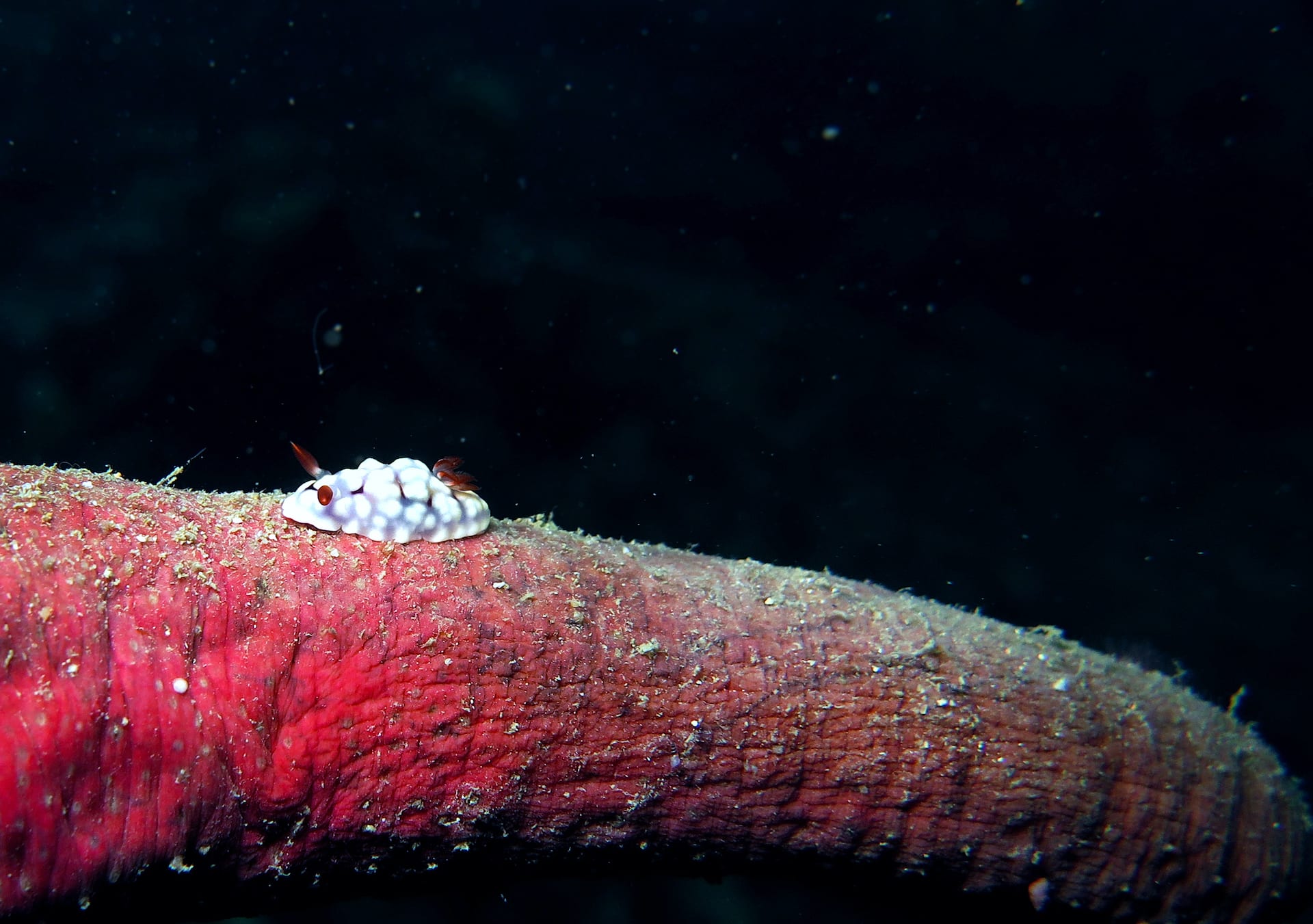 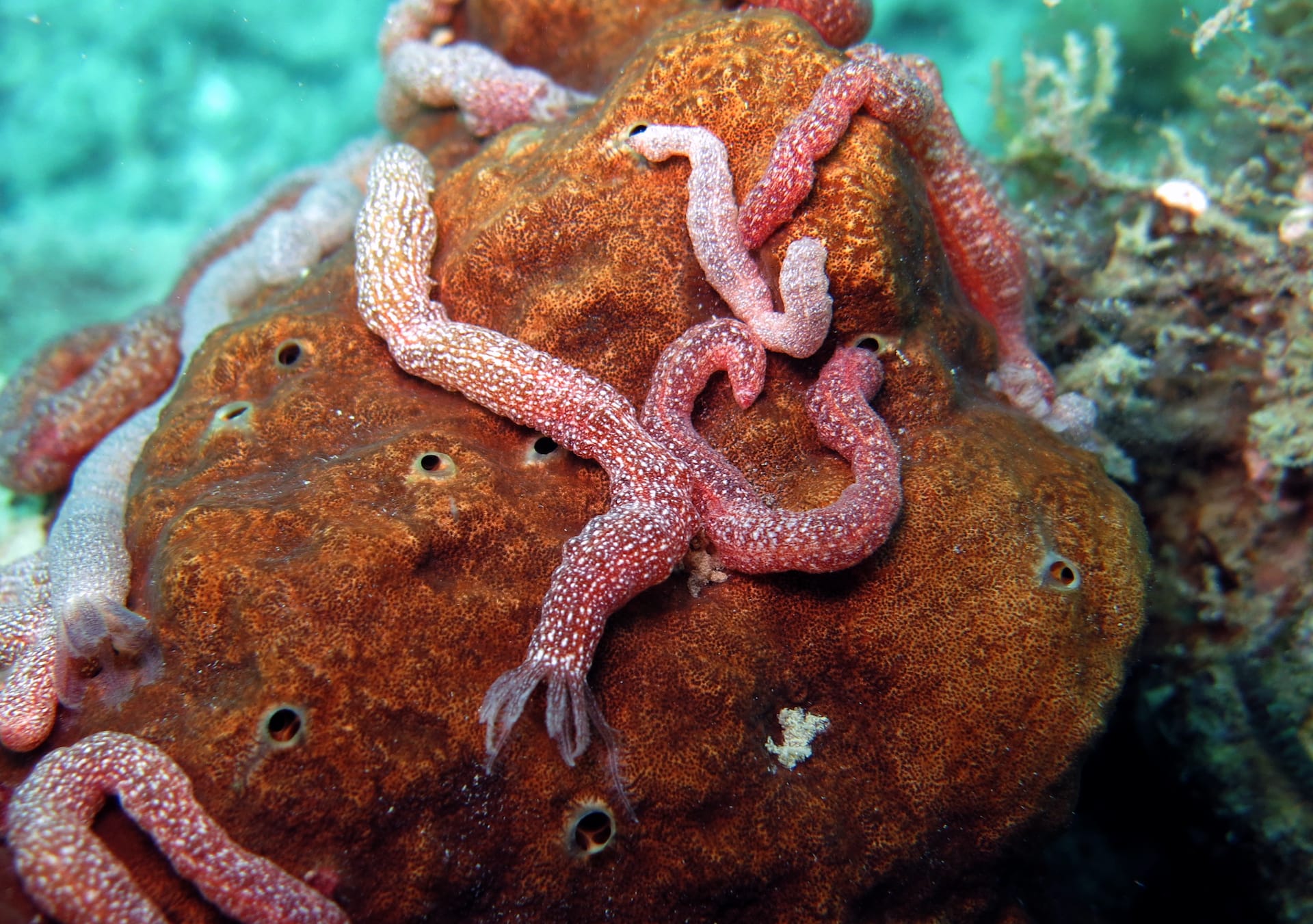 (Left) Nudibranchs are one of several smaller invertebrates that invite themselves to join the food party on the surface of sea cucumbers such as this Holothuria edulis. (Right) Synaptid worm sea cucumbers are small and slender and can be seen to colonise sponges in herds. Photos: Vardhan Patankar

#5 Enrichers of the sea
Organic matter, decomposing particles (detritus) and drifting plankton constitute the food for sea cucumbers. Bottom-dwelling species that walk or crawl on the seafloor use their tentacles to systematically pick up detritus from the seafloor. Some even burrow into the sand in search of organic matter. Sea cucumbers in the water column can swim in the currents as they filter-feed on plankton, some deep-sea species vertically migrating at least a kilometre.

Across these habitats, the mundane process of feeding, digestion, and excretion performed by sea cucumbers is crucial to the functioning of their ecosystems. They digest organic matter and excrete clean sand, a simple process that can go a long way in preventing algal blooms. Burrowing sea cucumbers aerate layers of sediments which helps animals in the deep layers of the ocean bottom.

Sea cucumbers help balance ocean chemistry, create conditions for a diverse community of animals to thrive and are indispensable in the marine animal network. More recently, scientists have found that their poop increases the alkalinity of the water and has critical implications in the face of increasingly acidic oceans.

Each of the branched tentacles of this Neothyonidium sea cucumber take turns feeding itself a mouthful of trapped plankton as three-fourths of its body sits buried in the sand. Video: Chetana Babburjung Purushotham

With representatives in nearly every marine habitat, possessing rare superpowers like shape-shifting, and playing a crucial role in keeping oceans alive and healthy, I vote for adding sea cucumbers to the list of superheroes of the seas. As is the case for sharks — the more popular marine superheroes — sea cucumbers are extremely threatened too. Considered a culinary delicacy and aphrodisiac, sea cucumber populations continue to be decimated despite regulations against harvesting them.