Shadow in the Sand: Encountering the Toad-headed Agama in Ladakh

Once listed as common, the toad-headed agama is now a rare creature in its native habitat of Ladakh

In fifty years of traipsing the wildernesses of India, one destination that I had never visited, though it was on my bucket list, was Ladakh. In 2016, I finally visited this gorgeous location. Being a naturalist, I was interested the natural world in general, but the creatures closest to my heart are always butterflies and moths. While planning my itinerary I got responses like “Butterflies in Ladakh, are you crazy?” to the more mundane “You’re wasting your time.”

Besides my favourite creatures, I was also very keen to explore Ladakh’s birds, amphibians and reptiles. Seven lizard species inhabit the high-altitude cold desert of Ladakh: four agamids, two skinks, and one gecko. I was keenly interested in locating a particular lizard, the uncommon toad-headed agama (Phrynocephalus theobaldi), called so because of its peculiar toad-like head.

On our second day in Ladakh, I was chasing some butterflies in the outskirts of Leh, in sandy terrain with sparse vegetation, when a small creature scuttled over my foot, and disappeared under a rock. I immediately abandoned the butterfly chase, wondering what I had spotted. Was it a reptile, a rodent or perhaps a pika? The creature was far too small to be any of the last two, so I settled for a reptile. I carefully approached the rock under which I imagined the creature had hidden itself. I turned the rock over carefully, but found nothing under it. A few nearby rocks were gently overturned, too. A tiny lizard, with a peculiar swollen head lay curled up beneath one of the rocks. My wish had come true: I had spotted a toad-headed agama! The Theobold’s toad-headed agama (Phrynocephalus theobaldi) is small, with an adult body length of 50 mm.

It continued to sit in the curled up position, for a few minutes, even after I had lifted the rock, before it realised that it was uncovered. The lizard then scurried away to hide itself under another small rock. The agamid is quick to bury itself in sandy soil when threatened. The best way to spot the lizard is locate one basking in the sun on a warm day. 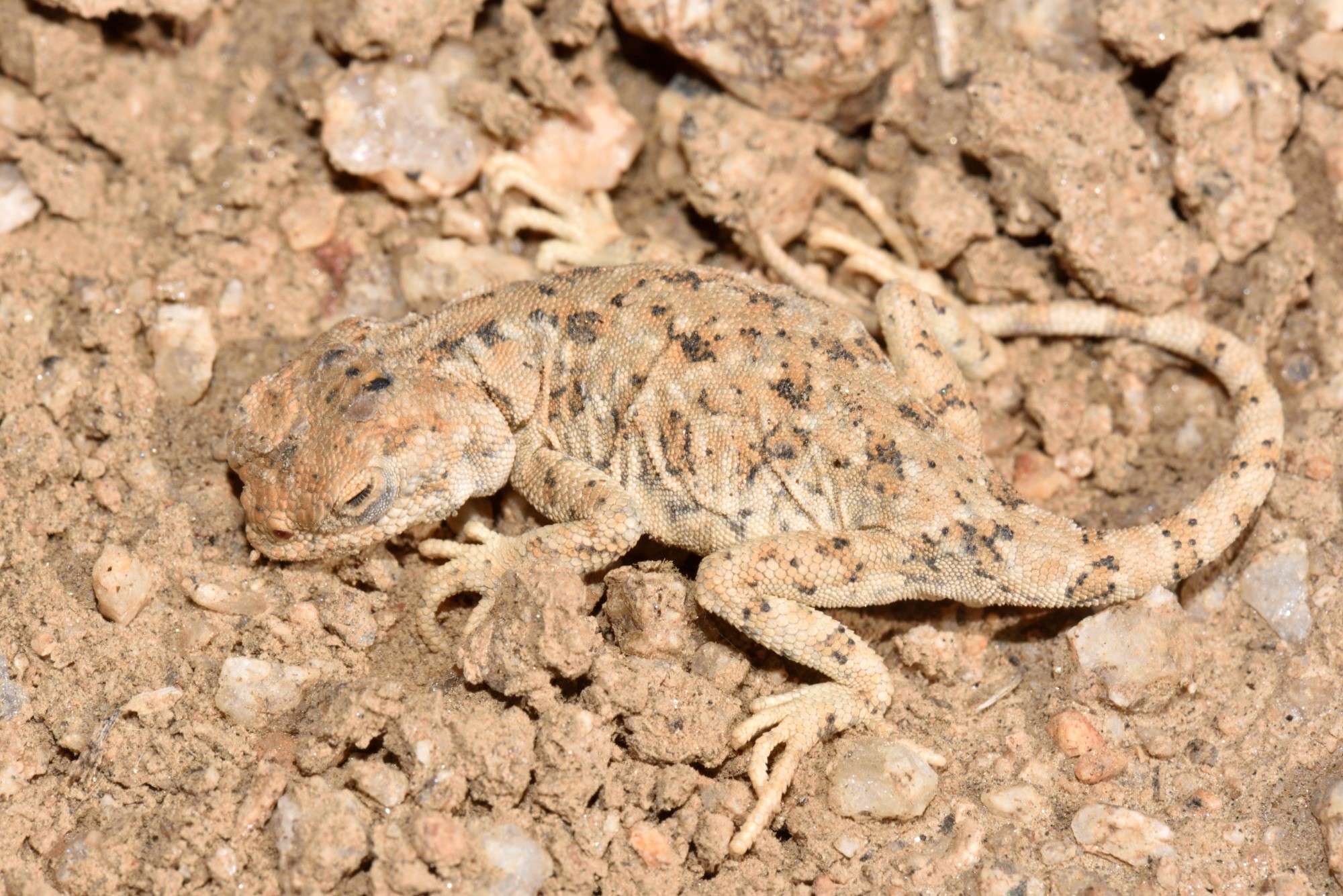 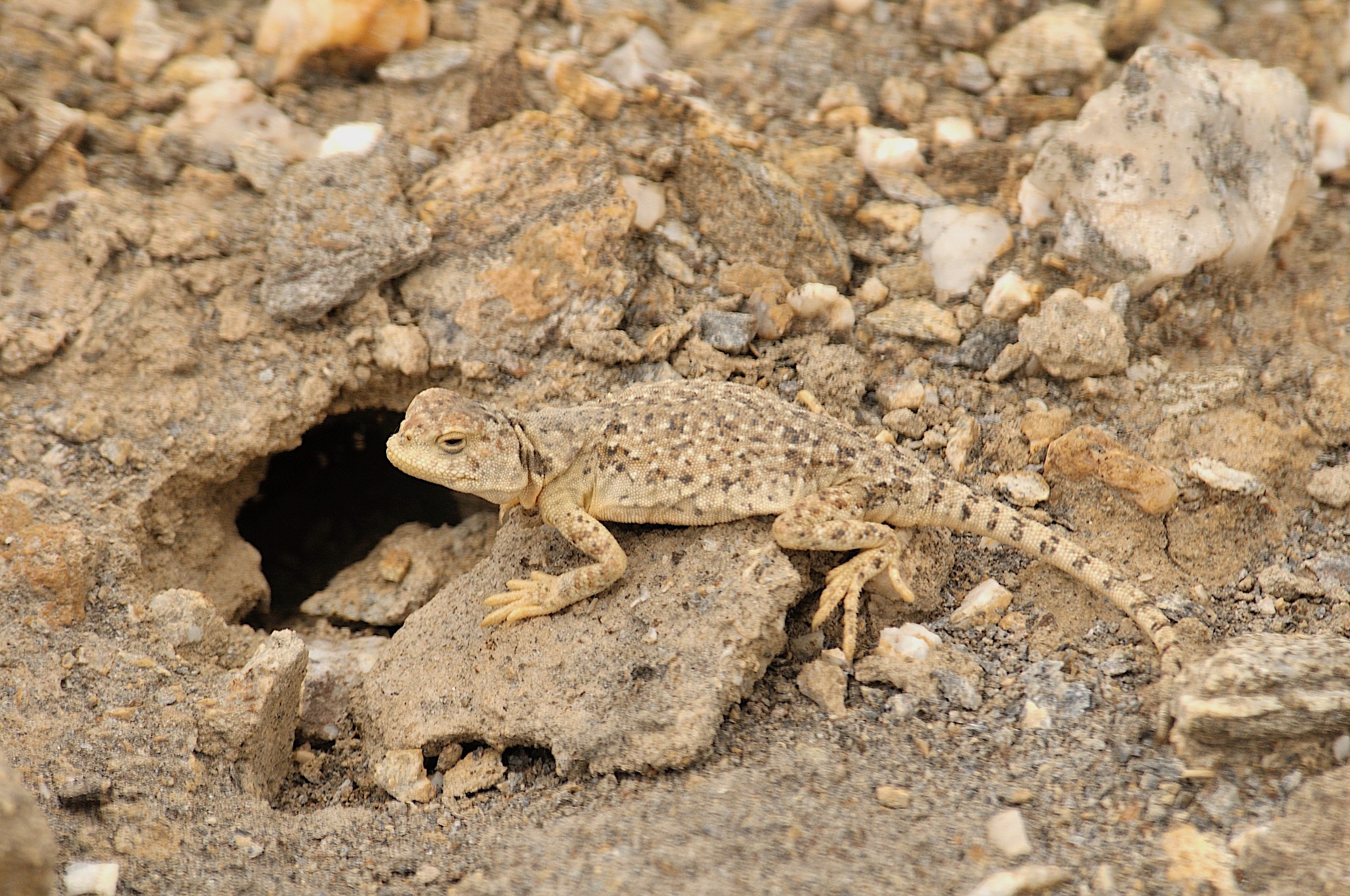 Also known as the toad-mounted lizard or snow lizard, the reptile will bury itself in sand, where it camouflages rather well, when it feels threatened. Mining and quarrying activity is a major threat to the lizard, which is known to occupy shallow burrows. Photos: Sanjay Sondhi Ladakh is the only place in India that the elusive Theobald’s toad-headed agama is found. Its typical hunting strategy is to wait motionless for prey to come by, and then pounce on it. Cover Photo: Dhritiman Mukherjee

The behaviour and ecology of toad-headed agamas is quite interesting. When threatened, they stand up on their limbs and open their mouths wide, in order to scare off predators. Much as I wished, none of the agamas I spotted displayed this behaviour. Intriguingly, like most members of the Phrynocephalus genus, the toad-headed agamas are believed to viviparous, which means they give birth to live young rather than laying eggs (oviparous). Though not much is known about the Theobold’s toad-headed agama ecology, it is believed to be viviparous, making it one of the few lizards in India that gives birth to live young. It is also believed to occupy shallow burrows and is monogamous (Smith 1935).

Literature states that Theobold’s toad-headed agama is listed as ‘usually common’ and is found ‘living in colonies’ (Smith 1935), but I found evidence for neither. I spotted the Theobold’s toad-headed agama only once again, at Hanle. Nowhere did this species seem common, and nor did I spot any on a second visit to Ladakh in 2018. Though listed as ‘Least Concern’ on the IUCN Red List of Threatened Species, unregulated tourism accompanied by increased concretization and hordes of visitors, is threatening Ladakh’s fragile habitat. We need to come up with ways to promote regulated sustainable and eco-friendly ecotourism, rather than the unbridled mass tourism model that currently prevails in Ladakh, if the agama and many other creatures are to continue to survive in Ladakh’s fragile habitat.