Smooth-coated otters are top predators of our riverine habitats, but new emerging threats are putting the lives of these playful, clever creatures at risk

I first saw smooth-coated otters in the summer of 2007 along the Kabini river in Bandipur Tiger Reserve, Karnataka. Bandipur Tiger Reserve is part of the Nilgiri Biosphere Reserve and home to the largest populations of the tiger and Asian elephant in the world. This is popularly known as “elephant country” and in summer, hundreds congregate along the backwaters of the Kabini reservoir. But this is also otter territory. That first sighting of the smooth-coated otters was enough to kindle my fascination. With great enthusiasm, and a little naivete, I decided to study the river system through otters, as a sort-of mascot for the freshwater ecosystems they inhabited. More than a decade later, I am still trying to study otters but I know the link between them and rivers is not as simple as I thought.

Otters belong to the family Mustelidae which also includes weasels and martens. Thirteen species of otters are found around the world, except in Australasia and Antarctica. They are almost exclusively carnivorous — most eat fish, though crustaceans also form a part of their diet. The smooth-coated otter which is found in tropical and subtropical Asia has seen its range decline drastically. They were once found from the marshes of Euphrates and Tigris rivers in western Asia to the humid tropical forests of southeast Asia. Peninsular India might be their last wild stronghold. Even here, these social animals are on the verge of disappearing almost entirely in many river basins in the north, particularly in central and north Indian states. While habitat loss is a real threat, their disappearance is mainly due to targeted poaching by organised gangs that specialise in setting up jaw traps and hunting with trained hounds. Sometimes, these gangs use dogs to drive them out of their burrows or dense vegetations, and mercilessly club them to death. Their smooth, warm fur is highly sought after and fetches a high price in parts of southeast Asia and Tibet where they are fashioned into coats and caps. Otters are not popular among fishermen either, mainly for two reasons — they have learnt to take fish from the nets that fishermen set up, and in the process they also damage them. As a result, fishermen incur both competition and monetary loss.

The river in the plains is usually very productive and can support fairly high otter densities when there is no overfishing or sand mining. Photo: Sourabh Bharti/Shutterstock Sand banks along rivers are an important element of the otter’s habitat. It is here they scent-mark, play, and socialise. Cover Photo: Dhritiman Mukherjee

Unlike some carnivores such as wolves, tigers, or snow leopards where individuals live in large territories, smooth-coated otters live together in large groups, in extremely productive tropical and subtropical rivers and water bodies, where prey is plenty. Fairly big groups of otters, sometimes of up to 15 individuals, inhabit about 15-20 km of river length. A sizeable group of otters can even harass and confront muggers and drive them away.

Not long after my first sighting along the Kabini, I started studying otters along one of India’s finest otter rivers — the Cauvery. Despite enormous pressures such as sand mining, intensive fishing and diverging water for agriculture, I spotted plenty of otters, including some in the heart of agricultural landscapes, close to settlements. This proved my initial belief wrong — that otters only lived in places that were “less disturbed” by people.

Smooth-coated otters are territorial and can often be seen driving even muggers away from their favourite sand banks and spots along the river. Photo: Dhritiman Mukherjee

The otters I encountered were shy but not terribly bothered by the presence of people. After all, they would see fishermen setting up nets every day. Most fishermen believed that their nets offered the otters an easy meal, and hence deserved their wrath. Few recognised that commercial fishing was affecting the otters’ lifestyle in a riverscape that was witnessing drastic transformations. But many fishermen I met also knew them better than most biologists. They would tell me that otters were active at night, something that published literature did not indicate. The smooth-coated otters had learned to adapt to fishing practices where gill nets were left out all night as catch was thought to be better between sundown and sunrise. Smooth-coated otters don’t see very well in the dark, and most peninsular Indian rivers have murky waters. Vibrissae (sensitive hair or whiskers) around the mouth play a role in locating fish under these circumstances. 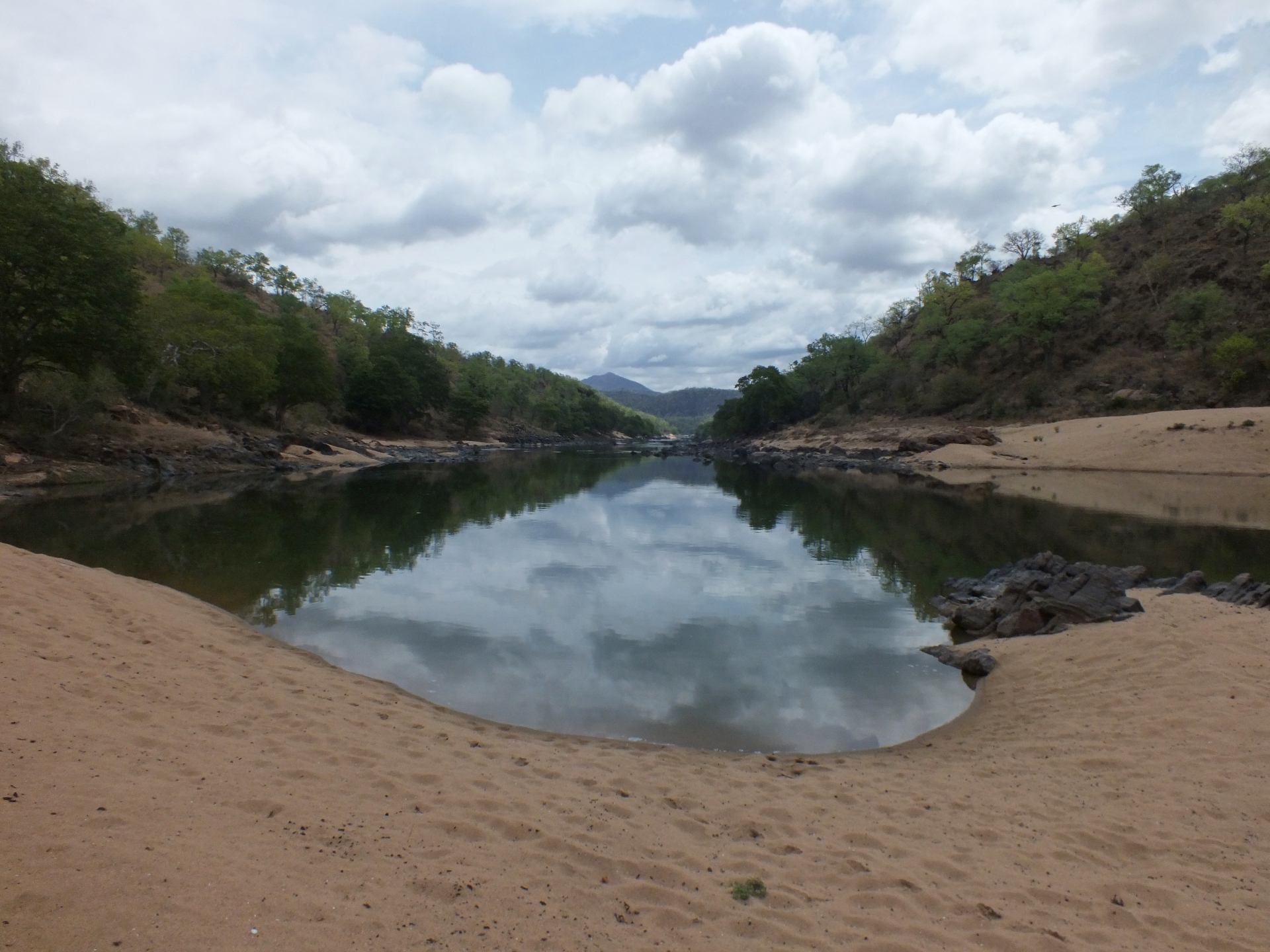 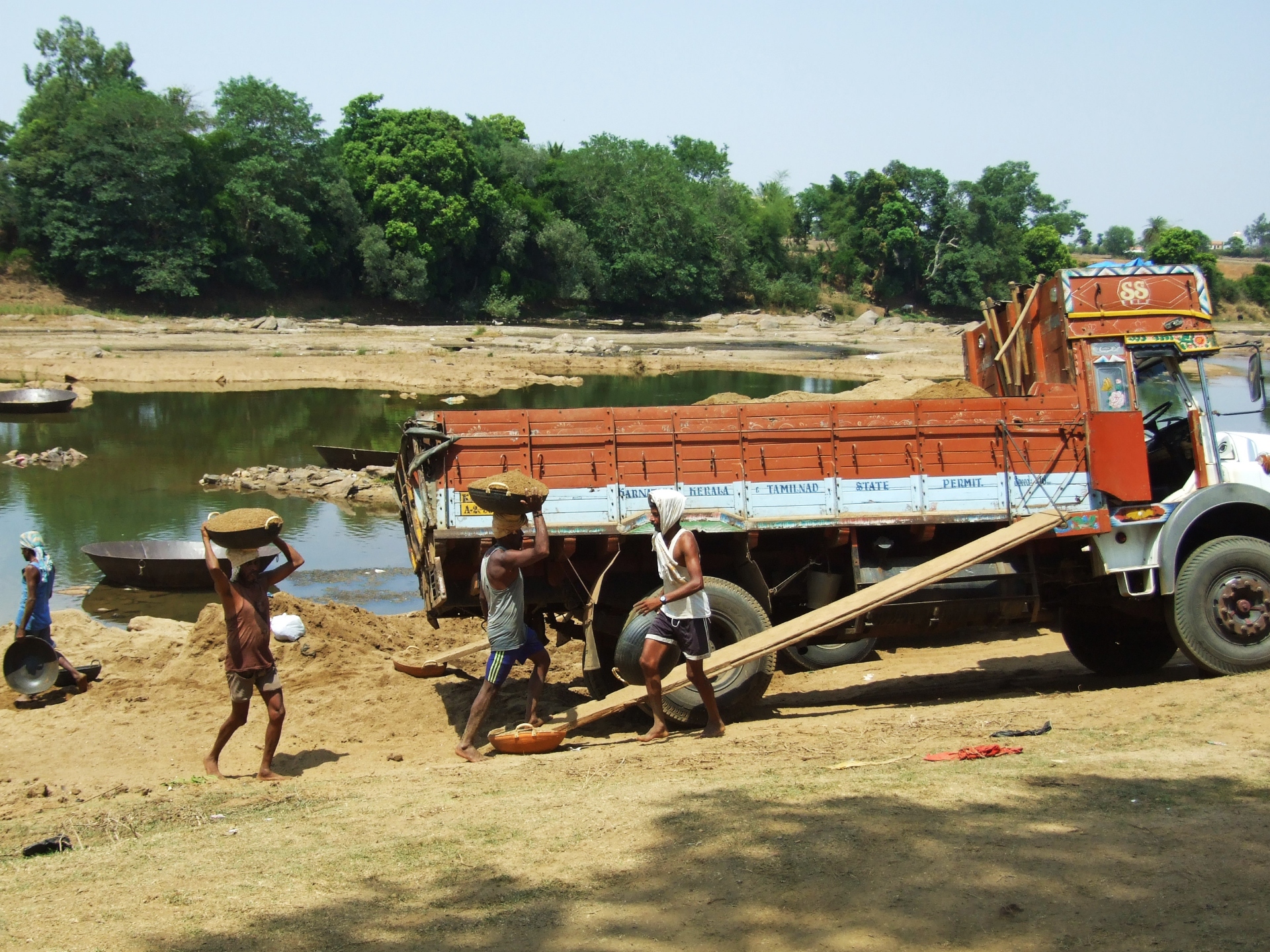 Illegal sand mining in the Cauvery basin has compromised the landscape, affecting the health of the river, and the lives of all creatures, big and small, that depend on it. Photos: Nisarg Prakash

But several threats along the Cauvery loom large. The riverscape is changing drastically, rapidly and unsustainably. Almost all of the sand that Bangalore and other major towns consume comes from the Cauvery basin. Illegal sand mining has come to occupy a disproportionately large area along the river, resulting in the displacing both, fishermen and otters to smaller stretches. Otters and fishermen occupying a narrow patch of the river means frequent damage to fishing nets by the otters and, as a result, little tolerance towards them. This is how demand for sand in a city can alter the relationship between otters and fishermen along the river.

Unlike the exploitation that Cauvery has witnessed, the Kabini (though it has one large dam) thrives with diverse mammalian fauna. Flanked by protected areas on both sides, fishing is not allowed and watching elephants swim from Bandipur to Nagarahole National Park and vice-versa is not uncommon. Muggers and smooth-coated otters benefit from this protection too. Though dam reservoirs are not an ideal habitat and might not support the otter densities, the Kabini backwaters are important as there is no intensive fishing, settlements, or sand mining that can drive them away. Bandipur and Nagarahole National Parks might have saved the otters in Kabini, but there is a crown-jewel even along the Cauvery that few places in the country can match. The Cauvery Wildlife Sanctuary along the river arguably has India’s finest riparian forest, and this 110 km stretch of river is free of human pressures — sand mining, fishing, pollution and diversion. Here, otters coexist with muggers that have largely disappeared outside the sanctuary and, fish eagles soar overhead with their mournful calls echoing along the river.

The 110-km stretch of the Cauvery in Cauvery Wildlife Sanctuary is truly alive and without much disturbance through much of the year. Here, otters live the way they must have for thousands of years unlike the river in the plains where they deal with enormous pressures from fishermen and sand miners in addition to diversion, dams and pollution. Photo: Chinmayisk- CC BY-SA 3.0

Places like these are a reminder of what many peninsular Indian rivers must have been like before fishermen, farmers, and cities ensnared them. Smooth-coated otters are also found outside the sanctuary in heavily modified riverscapes due to their ability to adapt. But unless we can stop further degradation of their habitats, smooth-coated otters will face a long, downward slide towards extinction with or without the threat of poaching.