Though worshipped, venerated, vilified, adored, and feared, this snake isn’t quite understood

Driving through the Indian countryside in India, you stand a good chance of seeing a temple, shrine, or sculpture dedicated to a cobra. When we need to use a gesture for a snake, almost invariably we use our fingers and palm to create the shape of a cobra’s hood. Our idea or image of a snake is the cobra. The common or spectacled cobra is probably the most iconised snake in the world. It is worshipped, venerated, vilified, adored, and feared. But it isn’t understood.

The common or spectacled cobra (Naja naja) is the most widely distributed of all four known cobra species from India found from the southern, western, and eastern tips of mainland India up to the lower reaches of the central Himalayas in the north. It is not found past southern Assam in the Northeast. It is the only known species in India that has the spectacled (eyeglass) mark, however faint, on its hood. The others either have no marking or a “monocle” or circular mark on the hood. Aside from India, this species is also found in Sri Lanka, Bangladesh, Pakistan, and Nepal.

The other three cobra species found in India are the monocelate cobra (Naja kaouthia), the central Asian cobra (Naja oxiana), and the Andaman cobra (Naja sagittifera). Contrary to popular belief, the king cobra (Ophiophagus hannah) isn’t a “true” cobra; it is a  genus all to itself.

The popular image of a cobra is one of a snake with its forebody erect, hood spread, and hissing. The sad truth is that when the snake manifests this behaviour it is scared for its safety and sees no escape. It is a traumatic interaction for the cobra.

Unfortunately, this is the imagery always portrayed of this species. Very rarely are images of a relaxed cobra taken or even sought. The hood is a defence mechanism, designed to startle an attacker to allow the cobra to escape. The “spectacle” markings on the back of the hood are believed to resemble eyes; a pattern evolved by numerous animals to ward off predators.

In natural settings, throughout their lives, cobras can fall prey to numerous predators — some truly surprising ones. We’ve all heard the stories about the mongoose and the cobra and yes, mongooses do often take on cobras, kill and eat them. However, peacocks, various raptors, cats, monitor lizards, and a host of other animals from big cats to kingfishers will be able and inclined to feed on cobras of various sizes, as well as other snakes.

This is possibly one of the reasons why we don’t see many cobras in pristine wilderness settings. Contrary to popular belief, snakes found in and around human habitation have not come in from the wild. They live there. People who are faced with a cobra in their homes or compounds often ask why the cobra has come there and usually want it moved back to its habitat. This is another point about the cobras that is misunderstood. Cobras, like a few other species, are more abundant around human habitation than they are in the wild. They’re like sparrows, crows, and pigeons — all species that benefit from the way we live. 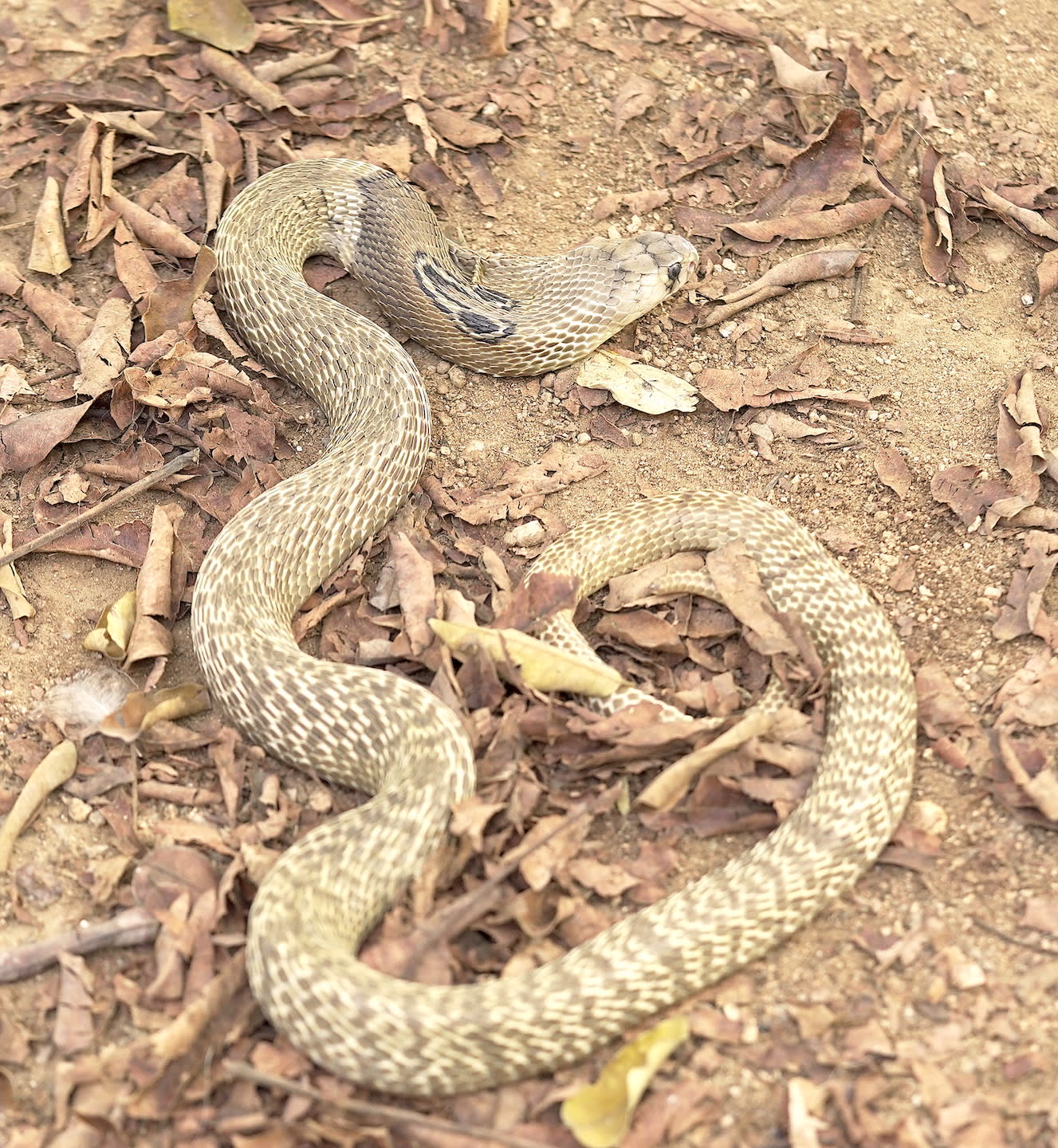 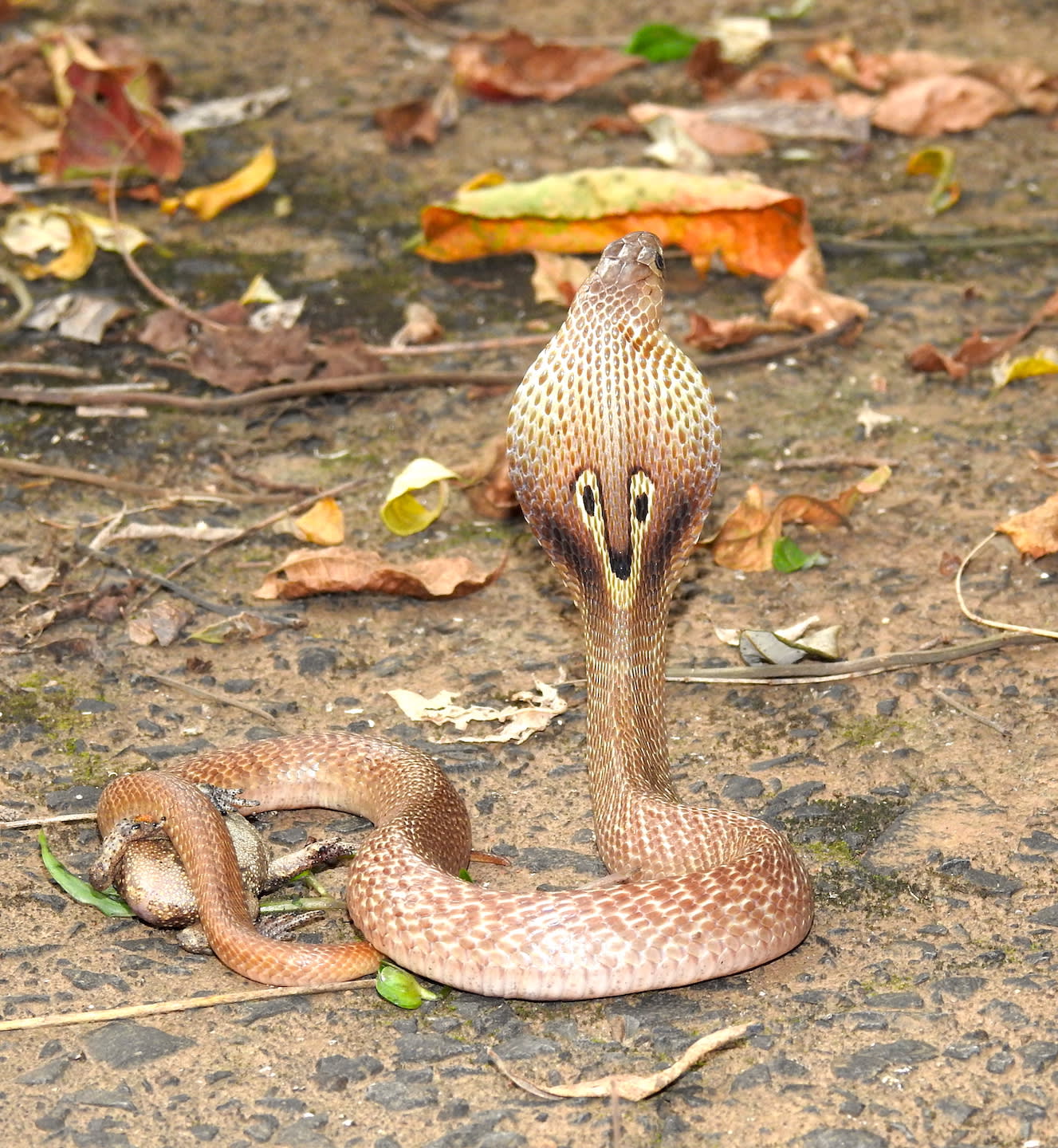 Left: The snake’s colour can vary from black to dark brown, to a creamy white across the habitats it occupies. Right: Patterns resembling a pair of spectacles on the rear of its hood lends the cobra its name. It assumes this posture only when it feels threatened. Photos: Gerry Martin (left), Dr Raju Kasambe / CC BY-SA 4.0 (right)

The network of sewers, drains, stockyards, warehouses, construction sites, garbage piles etc. all create an array of living spaces and an abundance of food in the form of rodents, insects, and amphibians. Being less specialised than many other snakes, cobras are able to adapt to numerous different habitats, microhabitats, and niches. They feed on rodents, insects, amphibians, reptiles, birds, and even eggs. They are built perfectly to thrive around humans.

There’s not much that’s unique to them when it comes to their natural history. They behave like the “typical” snake. But what is unique is the relationship that humans have with these magnificent snakes. They are the snake handler’s dream — easy to handle, relatively predictable and quite docile. They are also very impressive and put on quite the show. This, unfortunately, has played to their disadvantage. The spectacled cobra is abused and exploited. Even rescuers with the truest intentions pose with a cobra and take hundreds of pictures of it till they get the best one. Through all this, the cobra is going through a traumatic and stressful time.

On the other hand, cobras that aren’t harassed are a joy to watch. They are easily observed. Whether they are hatchlings, devouring anything that moves that they can overcome and swallow, or a pair of mating adults in an open field. Watching these snakes behaving naturally gives me a far better insight into their lives than handling them. 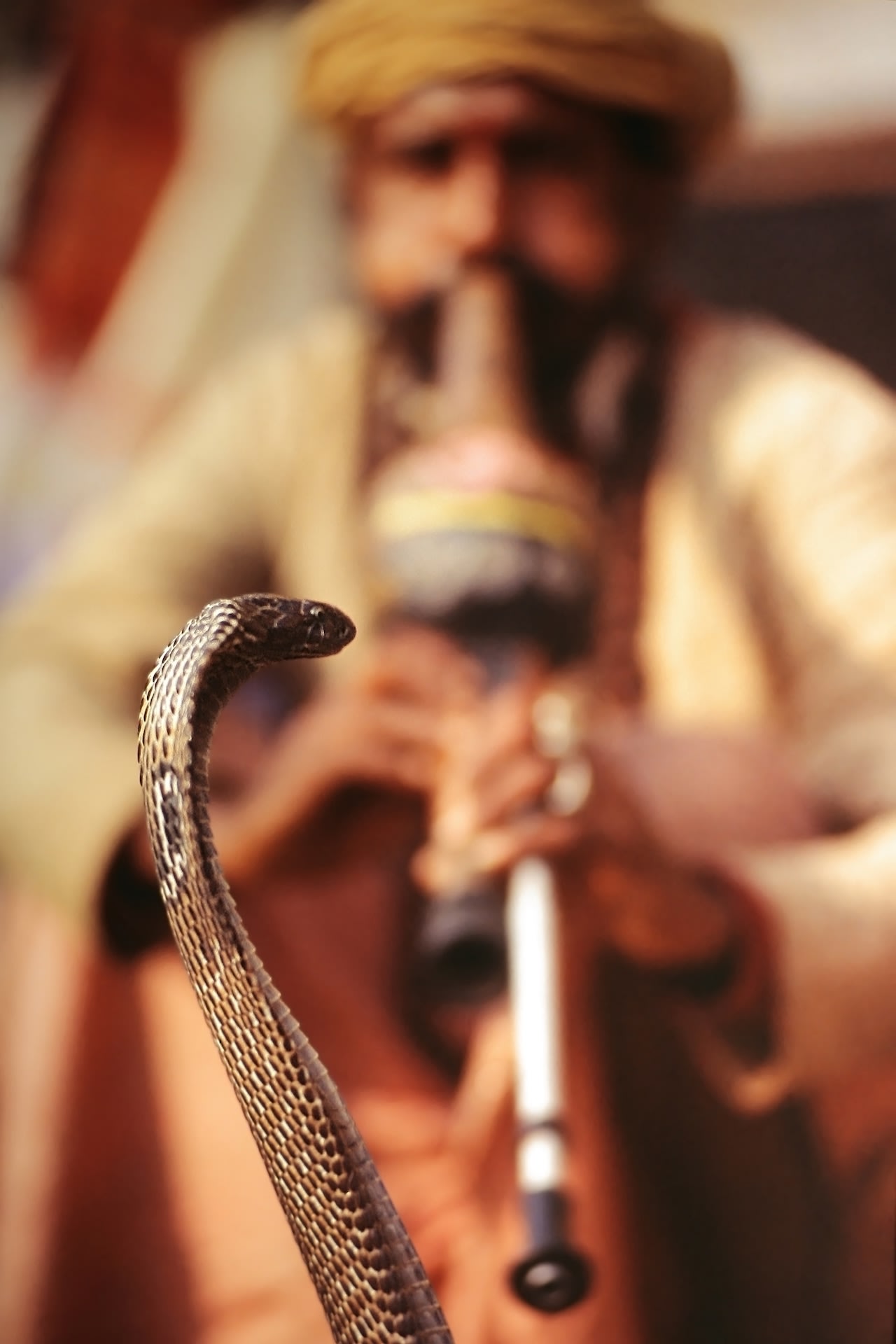 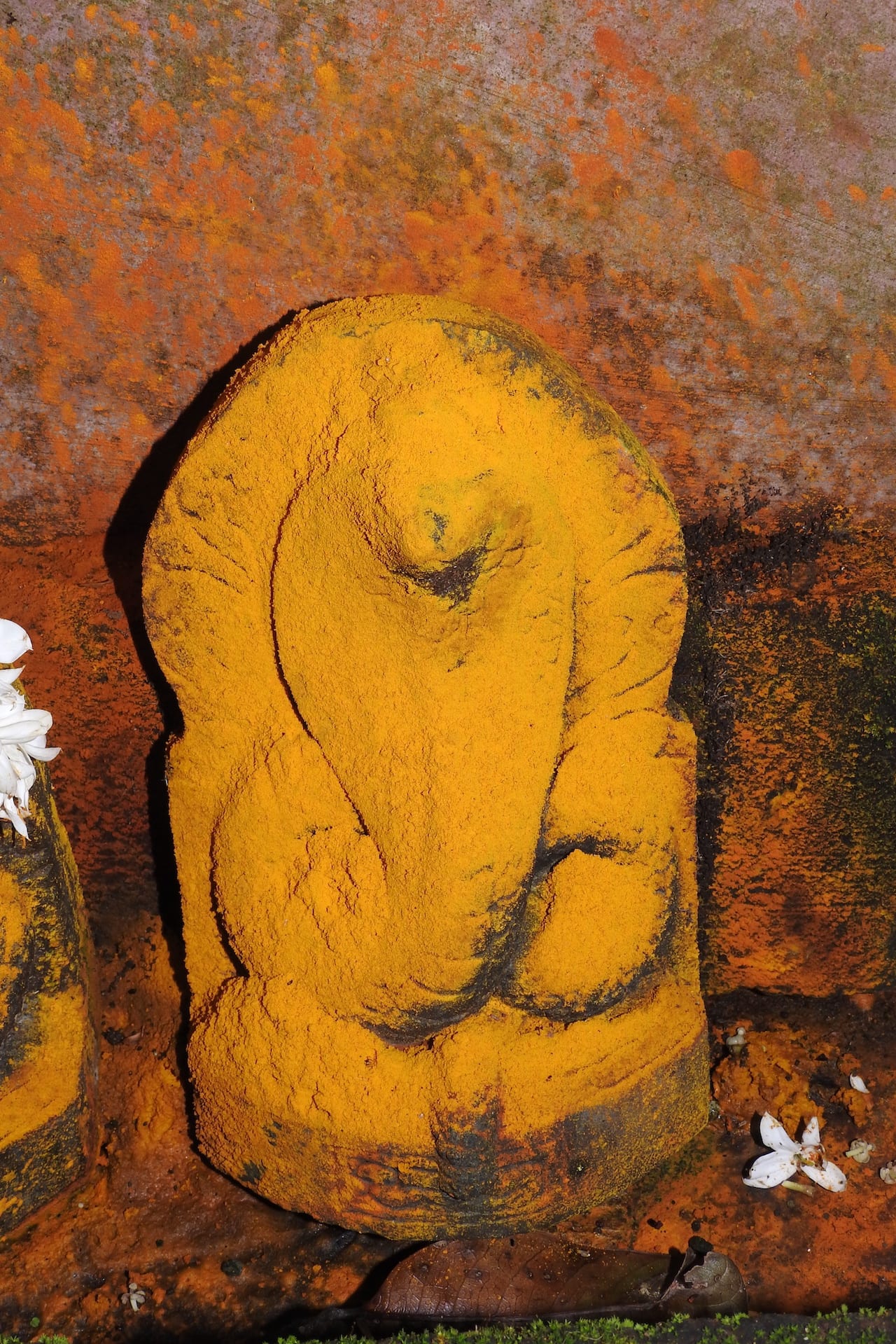 (Left) It is a myth that the cobra dances to the tune of a snake charmer’s pipe. The provoked snake is simply defending itself and waiting to strike, following the movement of the charmer’s hands and pipe. (Right) The cobra is revered in Hindu mythology and shrines dedicated to the snake are found across India. Photos: Jungle Bandana/Shutterstock (left), Dr Raju Kasambe, CC BY-SA 4.0 (right)

The same conspicuousness that we choose to see as a problem is actually a factor that makes this snake a great one to have around our homes, fields, and campuses. Unlike other species that rely on stealth or camouflage, the cobra relies on speed, display, and an inclination to flee or chase to survive and to capture prey. This makes it a snake that is very hard to get into trouble with. Unfortunately, that hasn’t played out quite as well as it could. This is fundamentally because we aren’t vigilant about where we step or stick our hands. We’re not aware of our surroundings and inadvertently step on snakes that are resting inside or under something, or accidentally pick them up along with various materials. Knowing that these snakes exist in our midst should encourage us to be aware of the spaces around us. We need to use torches at night, avoid walk through tall vegetation without checking it first, use a stick to check under a piles/stacks before moving them, and use the same level of caution as we would while crossing the road. More and more people are getting bitten while trying to push the envelope when handling these snakes, getting them to strike repeatedly, hood up higher and higher, or while performing various stunts with the species from holding them high with their hood spread to trying to kiss them. Yes, kiss them!

However, historically, the cobra was seen as a protector, depicted sheltering its human or divine wards and forming a parasol with its hood. Although these depictions might be metaphorical, they aren’t far from the truth. All around us, cobras wander casually, with their hoods folded down, searching for rodent prey — vectors for numerous serious and even fatal diseases. In farmlands, cobras regularly feed on other snakes including Russell’s vipers. Between competing with and even feeding on other more potentially dangerous snakes, cobras are inadvertently watching out for us. All they need is our acceptance and they will do their part in bringing a balance to ecosystems that they grace with their presence.