With a fat tail that is both a boon and bane, this herbivorous reptile has adapted well to a hot, arid habitat

One of my favourite animals is the naked mole rat (Heterocephalus glaber) of East Africa which spends most of its life underground, in a warren of tunnels that have nesting, resting, and sanitary chambers, plus escape routes. It is mainly vegetarian, surviving on plant tubers and roots. In India, we do not have anything equivalent to the naked mole rats, but our semi-endemic spiny-tailed lizard (Uromastyx hardwickii) comes somewhat close. It is however a reptile, not a rodent like the mole rat.

The spiny-tailed lizard has a wide distribution from Iran to India. In India, it is found mainly in the northwest, Gujarat, Rajasthan, western Madhya Pradesh, and some arid parts of Maharashtra. Formerly it was found in the arid parts of Haryana and Punjab as well, but now those lands are more or less crop fields. It is in Rajasthan and Gujarat that this lizard reaches maximum abundance, but its habitat requirements make it only locally common, with long stretches where it is absent. What exactly are its habitat requirements? It is not found in sand dune areas where its burrows will collapse, nor does it occur in areas of very hard substrate, where it cannot excavate burrows. It needs soft ground to dig burrows, an area where grass, herbs and perennial small shrubs can grow.

Unlike most reptiles, it is vegetarian, but it does not hesitate to eat ants, spiders and other small insects. Insects are consumed only in summer, for protein supplementation. This is a drought adaptation reported in many herbivore lizards. Out of the 3,300 species of modern lizards found in the world, only 90 species have a herbivorous diet.

When they emerge from hibernation in the summer, spiny-tailed lizards spend most of their day feeding, followed by basking in the sun, resting, and chasing each other. Photo: Pradeep Hegde The spiny-tailed lizards get their name from their stout tails that are covered with ‘spines’ or sharp, thorny extensions that they use to ward off predators. Cover photo: Soumabrata Moulick

Like all reptiles, it is a poikilotherm i.e. it cannot generate sufficient body heat so it depends on sunshine to warm itself. Cold winter days are not to the liking of the spiny-tailed lizard. It has a survival strategy though — it closes the tunnel leading to its burrow and sleeps over the long winter months in underground rest chambers. What about its energy requirements? No problem. It lowers its metabolic rate to almost zero and uses stored fat for basic body functions. How does it store fat in its vegetarian diet of grass, flowers and leaves, and an occasional insect? The spiny-tailed lizard has an extremely efficient digestive system that not only provides it food when it is active, but converts the extra nutrients of the vegetation into fat that is mainly stored in its fat tail and below the skin (subcutaneously).

Surface water is generally not present in its arid and semi-arid habitat for most of the months of the year when it is active. No problem. Its physiology is so evolved that it obtains water from food and the metabolism of body fat. 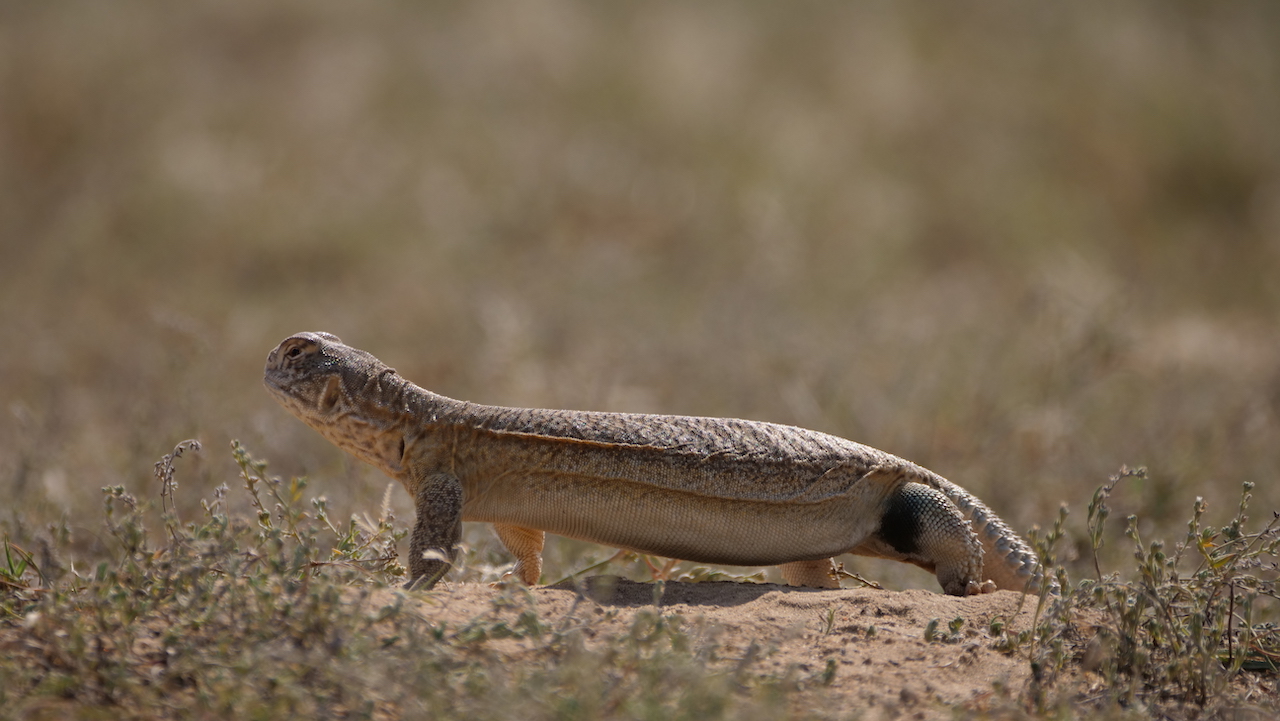 The spiny-tailed lizard has a stout body, and a fat tail that stores body fat, which the lizard depends on through long months of winter hibernation. Photo: Pradeep Hegde

However, the fat stored in its tail is also its undoing. Every predator wants it — be it a steppe eagle, laggar falcon, or fox. A whole lot of predators depend on the spiny-tailed lizard for food for at least some months of the year. During the ‘spiny-tailed lizard season’ which is from March to end-September, when they come out after a long winter sleep, predators gather around lizard colonies to feast on newly emerged hungry lizards. Birdwatchers and photographers also like to gather in some well-known areas to photograph this phenomenon. I know many photographers wait for summer to go to lizard areas to photograph raptors. One of the most famous areas is a goushala near Tal Chhapar Sanctuary in the Churu district of Rajasthan, where some remarkable photographs have been taken of unfortunate spiny-tailed lizards eviscerated by a steppe eagle or a laggar falcon.

The spiny-tailed lizard is an excellent food source for raptors, like this booted eagle, and other predators such as foxes and snakes. It plays an important role in sustaining the food chain. Photo: Vipul Ramanuj

With so many enemies all around them, how does the spiny-tailed lizard survive? They have a strategy for that too. When the deck is clear, the lizards come out and quickly gobble nearby vegetation. No lizard is very far from its escape burrow. As soon as a predator attempts to attack it, the lizard zips in its burrow. Dr Sutirtha Dutta of the Wildlife Institute of India who worked on the spiny-tailed lizard in Gujarat found that the burrow runs straight down for about 0.7 m at an angle of 27° with the surface. Then it goes down steeply for 0.5 m at an angle of 28°. The tunnel ends in a horizontal, box-shaped chamber, 17 cm in size. It is surmised that this angle of the burrow is an adaptation to avoid digging by predators such as golden jackal, desert fox, monitor lizard, and other predators.

During the summer spiny-tailed lizards are be seen feeding and enjoying the sunshine during the day, retiring to their burrows only at sunset, or when a threat is perceived. Photo: Pradeep Hegde

Although these animals are sometimes found solitary, spiny-tailed lizards like to live in colonies of 10 to 100 individuals per square kilometre. There is safety in numbers. Despite enemies lurking all around, during the breeding season, territorial males lower their guard to external threat as rival males become their main threat. Every male tries to attract females for sex. The female lays 10 to 14 eggs. The young ones, called hatchlings, live around the maternal burrow for 30-40 days before venturing out to establish their own burrows. This is the time of dispersal and fight for burrows and limited resources. Many young ones fall prey to predators, but the ones that survive, show strong site fidelity and may live for 5-6 years or more in the natal area.

Though strictly banned, poaching of spiny-tailed lizards for oil is still not uncommon. This is proved by the presence of dug-out burrows by poachers in many parts of its range that I have seen in my visits to the Thar Desert and Kutch. Its fat is considered to be a panacea for numerous human ailments and also an aphrodisiac. Thanks to some strictness in implementing of the Indian Wildlife Protection Act, we do not see street quacks selling ‘sanda’ oil anymore, a common sight 30-35 years ago.  However, dugout burrows prove that the trade continues albeit stealthily. Nonetheless, the biggest threat to this lizard is from habitat destruction due to expansion of agriculture, roads, urbanization, and now solar-panel and wind mills plants. Developers of these infrastructures prefer flat areas where these lizards live. The IUCN has included the spiny-tailed lizard in the Vulnerable category. Fortunately, there are still many areas in the Thar Desert and in Kutch that are still not yet ‘developed’. I hope we will leave some areas untouched where this wonderful animal can continue live its slow-paced life in peace.