Not the Witch’s Steed: Why the Hyena is India’s Most Misunderstood Predator

The hyena is neither evil or cunning, nor a solitary scavenger. What the intelligent mammal desperately needs is an image makeover 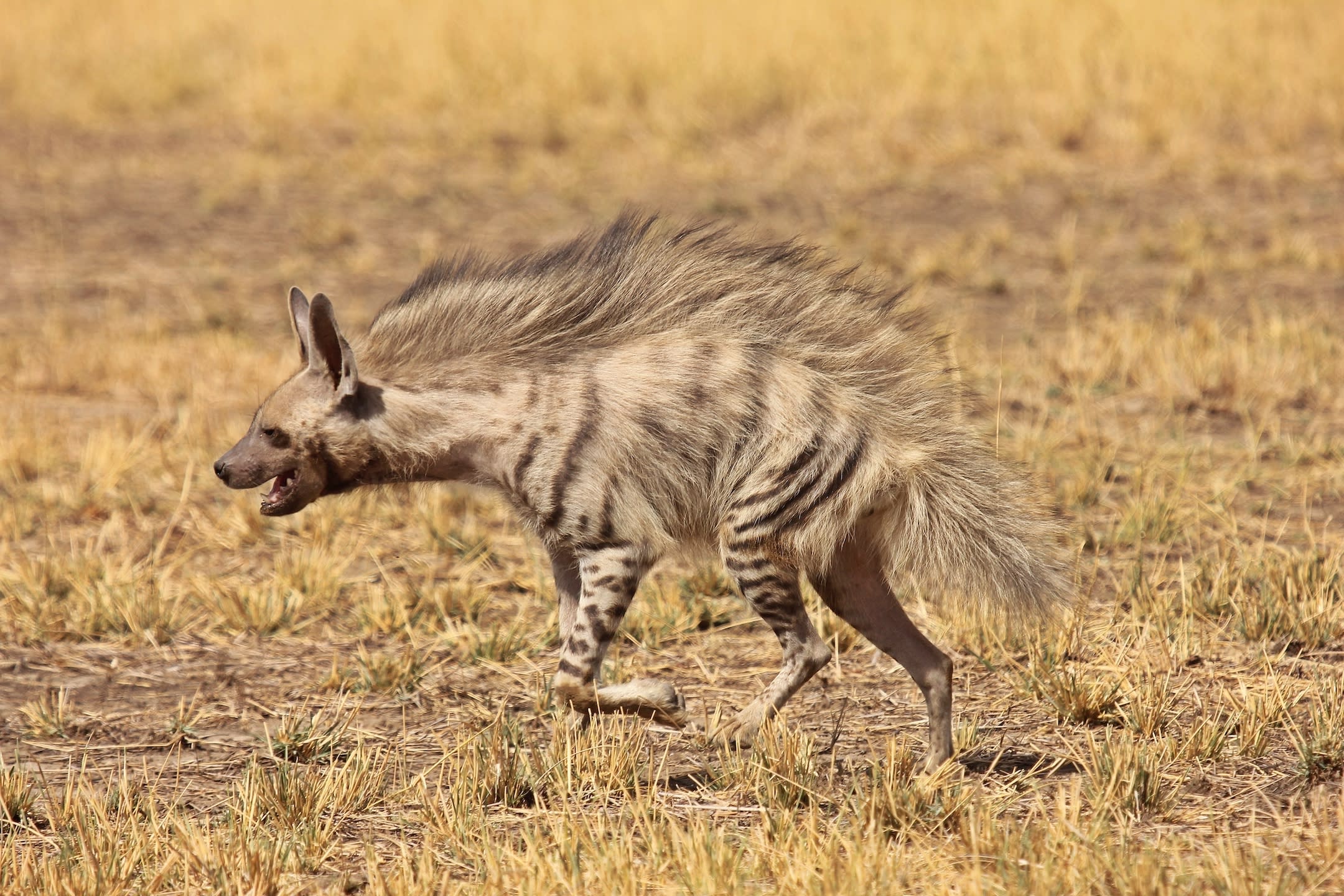 “The locals in Rajasthan refer to it as daakan ra ghoda – the horse of the witch,” says wildlife biologist Priya Singh, her voice cracking over the phone, making me feel like she is in a faraway forest, and not a few kilometres from where I live in Bangalore. We’re talking about the issues ailing the striped hyena (Hyaena hyaena), a species I tried to track in Velavadar, Gujarat, in the winter of 2019.

The unglamourous personality of the striped hyena means it loses out to more attractive, ‘flagship’ carnivores like the tiger, lion, and leopard in how it is studied and sighted by researchers and enthusiasts alike in India. Across the Indian Ocean, though, it’s a different matter. Thanks to the efforts of filmmakers like Beverly and Dereck Joubert, the spotted hyena of the African continent is better known outside of research circles than its striped cousin. Their film Eternal Enemies: Lions and Hyenas placed this unglamorous species in the limelight and gave viewers a deep insight into habits and social structures. Also, the spotted hyena is less nocturnal, less solitary, and less reticent than our striped hyena, which has also contributed to the latter’s lesser-known status here. And of course, its reputation doesn’t help its completely undeserved image.

The striped hyena is a hardy survivor. For instance, in semi-arid and arid deserts, it can go without water for several days. Photo: Partha Pratim Kundu
Cover photo: When threatened, the striped hyena sticks up the mane on its back, making itself look larger and more intimidating. Photo: Vickey Chauhan/Shutterstock

More than just a scavenger

Consider their reputation as base scavengers. “If you go to a hyena’s den you will see a collection of bones there, including entire skulls of cattle,” says Singh. But it’s what she says next that shocks me. “I’ve seen a lot of langur skulls in their dens — they look a lot like human skulls. It freaks me out.” I laugh nervously. Singh goes on to say she’s seen goat, sheep, and dog skulls, bringing my expectations back to the norm. But in an instant, we’re back in the unexpected. “In the scat, I have come across a hare’s hair, which means they would have hunted it — because it is such a small animal they wouldn’t have found it dead.” Immediately, its scavenger image acquires a hunter’s sheen in my eyes. “I found scales of a snake, which is interesting, and a lot of vegetative matter,” she adds. That makes me sit up and orient my ears like a fox that has just heard a rustle in the grass. “I’ve seen them raid karela (bitter gourd) fields at night and their scat was full of karela seeds,” says Singh. She’s also found ber (Indian jujube) seeds, gaando bawal (Prosopis juliflora) pods, as well as cucumber and melon seeds in their scat.

I knew hyenas gorged on livestock carcasses but to find out that it also dined on the livestock’s diet was startling. Hyenas are associated with death and that might come from their being excellent scavengers. But this evidence of them foraging for vegetative matter makes me think about how their reputation isn’t fully founded on fact.

Singh knows a thing or two of this ill-founded reputation. She grew up in Rajasthan and she says that the reputation of the hyena is universally negative across the state. “Hyenas wait for witches under khejri trees,” Singh tells me of the villagers’ belief. “Witches sit ulta (back to front) which is why the hyena has a sloping back — it helps her mount. Then the witch goes riding on the hyena. While the witch eats the soul of an animal or a person, the hyena eats the body,” finishes Singh as I marvel at how perfectly formed this superstition is. “This is why it’s called daakan ra ghoda — the horse of the witch,” she says, like it’s the most obvious explanation in the world.

Next, on Singh’s recommendation, I call Dr IP Bopanna, a wildlife biologist who studied the hyena in Kutch. Bopanna has worked for nearly seven years on his PhD on the striped hyena. I mention the daakan ra ghoda superstition and he tells me that though he didn’t encounter any such tales in Kutch, he did hear one myth that surprised him. “Most people understand that hyenas generally eat carrion but some people also say that it comes hunting for sheep and goats and it always kills more than it requires. They assume that they kill more than 20-30 animals just for pleasure.” To illustrate the hold this belief has, he tells me of an incident in which a hyena entered a goat pen and only one goat was injured. The next day the people started blaming the wolf. Why? Because they were not willing to believe that a hyena could have entered a pen and not killed with abandon!

The striped hyena is largely a solitary forager but it does come together in family groups around dens. Photo: Shreeram MV

The hyena, Bopanna says, is the largest carnivore in most of Kutch, which means that it faces little competition from leopards and tigers like it does elsewhere in India. This situation gave him a different insight into its social behaviours. “Since they are the apex predators and don’t have any other species trying to attack them, they are able to spend more time in cub rearing and this results in low mortality,” explains Bopanna.

He adds how these mostly solitary foragers prefer a clan when it comes to parenting. “In cub rearing, they form a family-based unit that may consist of a mother, and her litter,” he adds. But what he says next about the denning sites is surprising. “Dens here were a complex of multiple simple dens — you have multiple groups and small families living in them.” So, an otherwise solitary animal has adapted to live like we do in our cooperative societies and colonies. 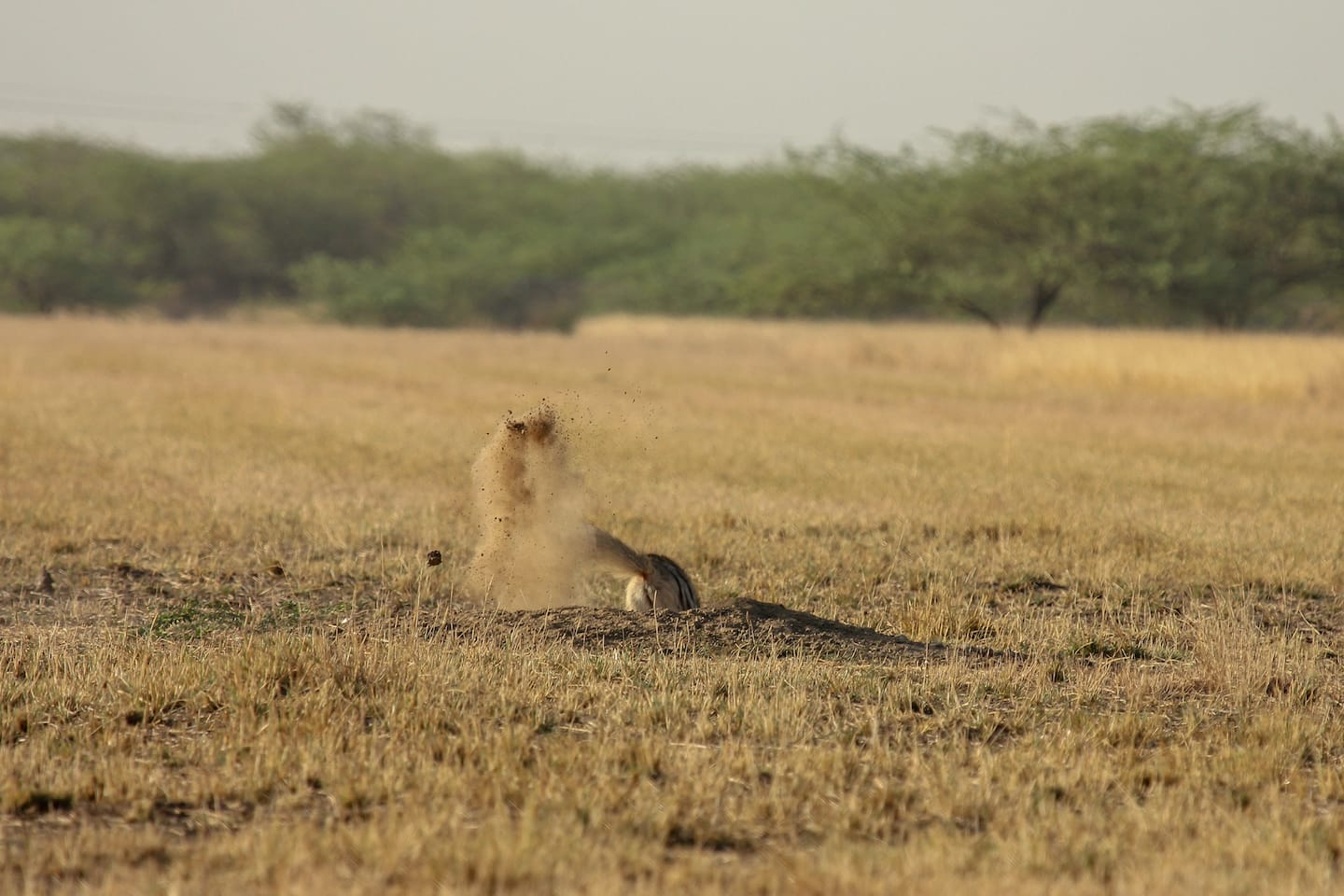 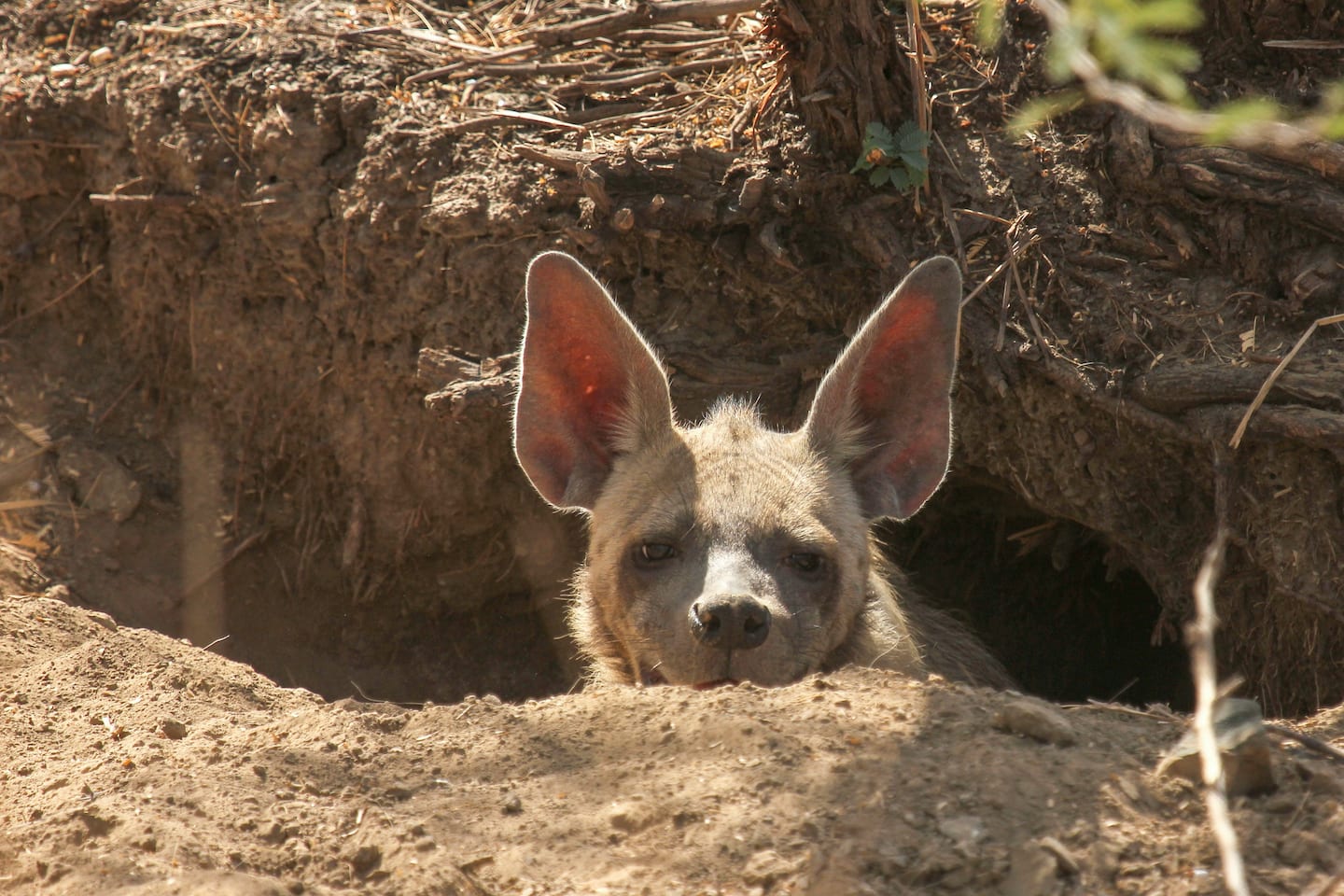 (Left) A striped hyena digs a den burrow. Hyena dens are well-concealed and have narrow entrances, but can extend up to two metres wide inside. (Right) Indian striped hyena peeping out from the security of its den. Photos: Vickey Chauhan/Shutterstock

On the trail of this new (to me) remarkable social behaviour, I dig deeper and ask him what else he observed at the dens. “The males generally are nomadic. They tend to move out of the den,” says Bopanna. “We always used to assume that the females wouldn’t disperse very far. There was one (female) animal which was collared close to where we were working.” When the animal dispersed, Bopanna and his team assumed it would join a family or group as a den in a nearby area. “It was found in a snare on the India-Pakistan border,” he says, much further than the team thought it would go. “It took the animal 4-5 months to reach there but it was very surprising that it actually managed to go so far.” There were 7-8 known hyena families between where she was collared and where she was found and she choose not to join any of them, which was unexpected.

When the first pair of hyenas moved into Velavadar in 2003, nobody in the area even knew what the animal was, says Amit Vegad, a guide and naturalist operating at the Blackbuck National Park in Velavadar. The locals feared it for its grisly look and gave it a wide berth. A few years later, another pair had moved into the area and had cubs in an abandoned school. The ruins are surrounded by fields that are raided by herbivores from the park, but the villagers were so scared of these mysterious new arrivals that they wouldn’t even go to keep watch in the fields at night. Perhaps the witches’ steed superstition had ridden its way to south Gujarat.

The striped hyena is a nocturnal scavenger and hunter. During the day it usually stays hidden or rests — like this striped hyena that is basking in the morning sun outside its burrow. Photo: Vickey Chauhan/Shutterstock

In November 2018, a photograph sent to the forest department in Velavadar showed a female hyena with a wire entangled around its neck. When they tracked and found it, it ran to its den in the grassland across the Park. There, the forest department kept watch as they waited for the rescue team to arrive. Around 25 people set nets around the den, and then let out water towards the den to lure it out. The animal finally emerged and got caught. In the ensuing hubbub, Amit jumped on it to restrain it and, in the process, was bitten. The hyena was then tranquilised and taken to a rescue centre at Vadal, near Gir, to remove the wire. Meanwhile, Amit had to be given rabies shots at a government hospital in Bhavnagar. There, he was faced with a unique problem — the doctors didn’t know what a jharak (hyena) was! He had to show them pictures on his mobile phone for them to understand.

Superstitions take up residence across India, and Velavadar is no exception. The locals there believe that the hyena saliva from the bite makes the bones dissolve. After Amit was bitten, he had to bandage the wound for around eight weeks and the locals would constantly wonder whether his bones were dissolving under the bandage. “I was so stressed by the reactions that I went to the larger hospital in Bhavnagar and had a battery of tests conducted,” shares Amit. They came out all-clear and it was only then then people started to believe Amit. Now if only there was a battery of reports that could clear the hyena of its ill-deserved reputation.

Seeing that Amit not only survived the hyena bite but is thriving, the locals in Velavadar are slowly coming to believe that the hyena bite does not do what they feared. Thankfully, the animal’s reputation is changing for the better.

With a brown coat and dark stripes, hyenas can easily camouflage themselves when they want to stay hidden in the tall, golden grasses of the Blackbuck National Park, Velavadar. Photo: Shreeram MV

As I disconnect the call with Amit, I’m scratching my head and wondering how this ill-deserved reputation can be combated and changed. Suddenly, something that Singh mentioned strikes me like a bolt. Singh’s family holds ancestral rights to land in Gopalgarh, in Rajasthan, and she grew up hearing numerous wildlife stories. One that stayed with her was being told how her great-grandfather had imposed a hunting ban on only hyenas not just because they have no value as trophy or meat but also because they keep the landscape clean of rotting carcasses. He called them the municipal corporation for this “cleaning” work they did. Now if someone from an era of less information could hold such informed, progressive views, perhaps we don’t have to travel very far ahead to change our own in this modern era.