Unbelievable. I was sure we had made a mistake in counting. Let’s begin again. We counted them again, pausing the video and carefully enumerating the individuals on the clip that the survey team had recorded when the troop of stump-tailed macaques (Macaca arctoides) was crossing a gap. The final tally still stood at 194 individuals! Excited, I dug into all the accessible literature and shot off emails to all my friends in primatology, enquiring about their observations on the group size of stump-tailed macaques. All of them reported a group size of around 50-odd individuals — the largest being a provisioned troop in Thailand with 120 individuals. I was stunned — the Hollongapar Gibbon Sanctuary clearly harbours the largest recorded troop of stump-tailed macaques found anywhere in the world!

Stump-tailed macaques live in large, mixed groups of males and females. Females often remain in groups they were born in, but males leave to find new communities to breed in at maturity. Photo: Narayan Sharma

We were baffled by this observation, as Hollongapar — a tiny lowland rainforest fragment in the middle of a tea garden in Upper Assam — is not a predator-free environment. Leopards, pythons, and raptors are frequently encountered in the sanctuary. Typically one would expect that a terrestrial primate like the stump-tailed macaque is generally more vulnerable to predation, than the other more arboreal primates of Hollongapar.

Stump-tailed macaques are semi-terrestrial primates, which means they climb trees in search of food, but also spend considerable time walking, foraging and grooming on the ground. Photo: Udayan Borthakur

Hunting, coupled with habitat loss and fragmentation, are the major reasons for the precipitous decline of this primate throughout its distribution range in northeastern India, Malaysia, Myanmar, Thailand, Laos, and Vietnam; the species is now extinct in Bangladesh. In 1933, Charles McCann reported the widespread occurrence of stump-tails in Nagaland. Their numbers subsequently dwindled dramatically, possibly due to rampant hunting for food by local communities. Today, they occur only in a handful of areas in Nagaland, but seem to have become locally extinct from various sites of the Northeast.

It is possible that the reason the stump-tailed macaque may have flourished more in Hollongapar because of the absence of hunting in the sanctuary, their last stronghold.

Stump-tailed macaques are omnivores — they mostly survive on fruit, but also feast on leaves, seeds, and flowers, and, other small species such as frogs and bird eggs. They often store food in little pouches for short periods of time, to chew on later. Photo: Diganta Gogoi

The sanctuary, interestingly, appears to have abundant food resources to offer to the growing stump-tailed macaque population. They consume fruits, shoots, tubers, flowers, as well as the leaves of various shrubs, trees, climbers, and the abundant bamboo. Their protein requirement is met by fungi and other small animals, such as frogs, slugs, and insects. There is minimum overlap in the diet of this species with the other primates that live in this forest, such as pig-tailed macaques, capped langurs, hoolock gibbons. There is limited overlap with the rhesus macaque, which occurs along the fringe areas of the sanctuary. This exclusivity in food resources could be one of the reasons that has led to a boost in the number of stump-tails in this threatened forest patch.

When young ones are born, they are almost white in colour. Their hair darkens and face turns reddish-pink with age. The newborns stay with the mother and her troop for at least a year where the mother and the other females of the troop provide food and care. Photo: Udayan Borthakur

Stump-tailed macaques seem to have had a fairy-tale journey, one of persistence and triumph. However, like any other fairy tale, their story is also that of a hidden struggle for survival, of constant battles with potential dangers.

A railway track that bisects the sanctuary into two unequal halves had traditionally confined the stump-tailed macaques to the larger section, not allowing them to move across. Desperate times, however, call for desperate measures, and recently, a group of 50 individuals, which had split from a large troop in the sanctuary, crossed the track to establish its territory on the other side. This was obviously a dangerous move by this daredevil troop, as many animals have met a gory end on this track. What is noteworthy, however, is that neither this troop, nor any other species has ever used the canopy bridge erected here by the railways to facilitate animal movement across the track. Nevertheless, one wonders whether a couple of underpasses connecting the two fragments would have been useful.

With an area of just over 2,000 hectares, and cramped in by tea gardens and human habitations, it is clear that the sanctuary cannot endlessly support an ever-growing population of macaques. Interestingly, the stump-tailed macaques never visit human habitation, unlike other primates that do. The species never forages on crops either, and is also reluctant to visit a small woodlot owned by the tea estate on the northern side of the sanctuary. 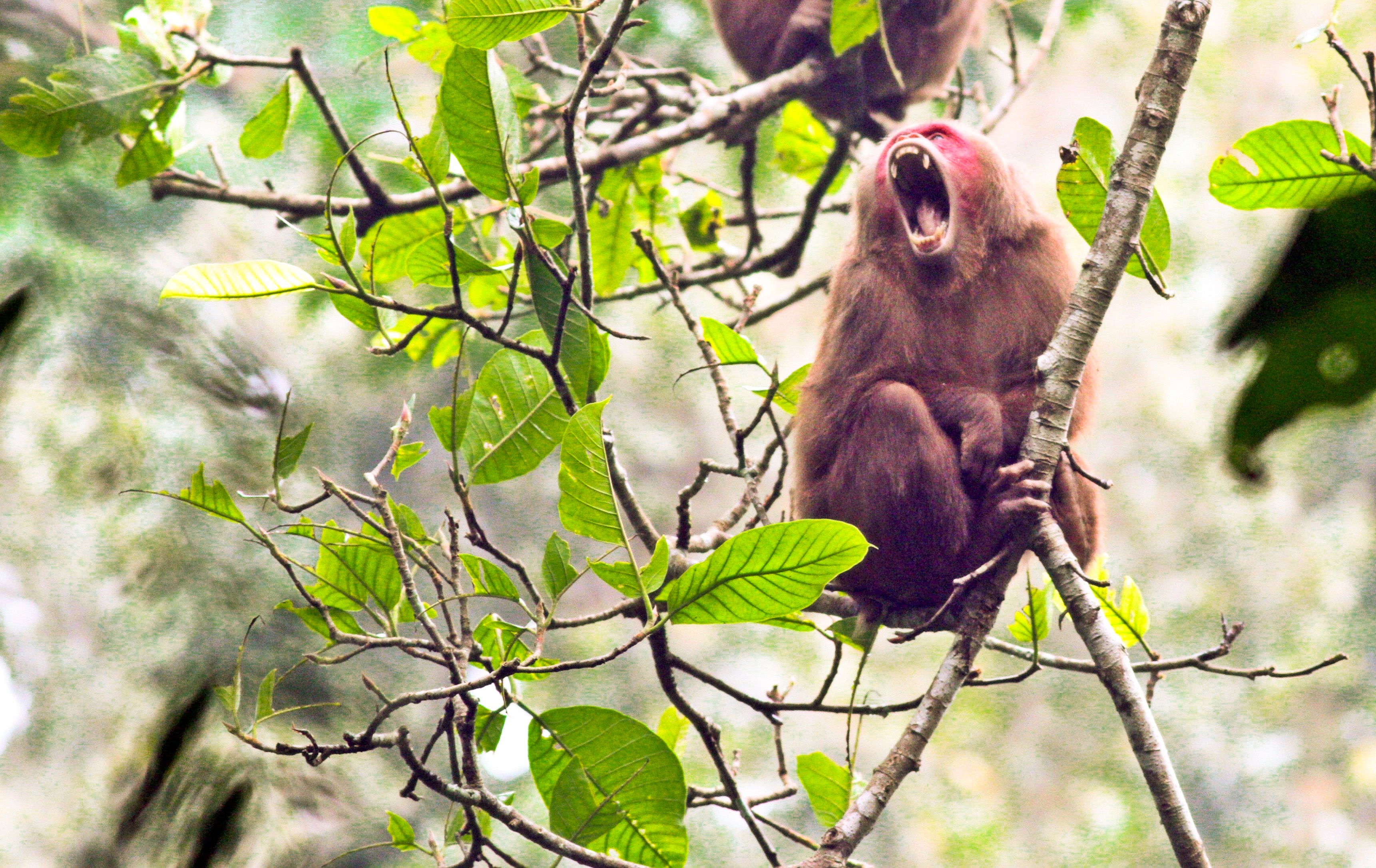 The Hoolongappar Gibbon Sanctuary is the primate’s safest home. However, increasing human intervention has led to the destruction of the habitat, and many fall prey to the speeding trains on the railway line the cuts through the forest. Photo: Diganta Gogoi

Another threat to the survival of the macaque population is the chronic and unsustainable extraction of forest resources for use by the local communities, about 25 per cent of which includes the food the stump-tailed macaques eat. The forest department is mulling over the idea of forest restoration through the plantation of important food plants of primates (mostly of western hoolock gibbon) in the most degraded parts of the sanctuary. This should, however, be done carefully as the macaques regularly forage in some of these areas during the dry season when resources are relatively scarce in the intact forests.

The sanctuary has been predominantly managed with the aim to conserve its flagship species: the western hoolock gibbon, an exclusively arboreal species. An inclusive approach that takes into consideration the needs and requirements of all the primate species of this remarkable rainforest would help ensure the continued persistence of this unique assemblage of primate species, unparalleled anywhere in the subcontinent. 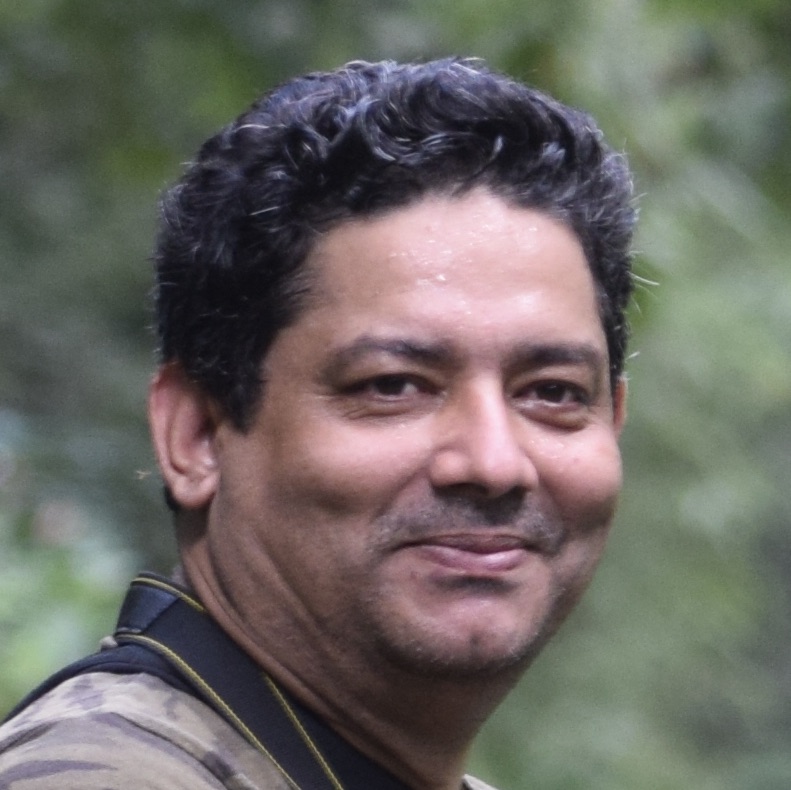