The Stump-tailed Macaques of Hollongapar

On my final morning in Assam’s Hollongapar Gibbon Sanctuary, the rain-soaked forest of hollong and ficus trees has one last adventure up its sleeve for me. Seasoned local guide Pradeep Baruah has on previous days introduced me to most of the seven major primate inhabitants of the semi-evergreen forest, including the endangered hoolock gibbon, capped langur, and pig-tailed macaque. He’s disappointed that we haven’t yet met the stump-tailed macaque (Macaca arctoides), but tracking the monkey is a task even for those who know the forest best.

Quick and elusive, these creatures are arboreal as well as terrestrial, covering a wide range of the forest for their daily activities. The IUCN classifies them as a vulnerable species on its Red List. As of 2019, the 20.98 sq km Hollongapar Gibbon Sanctuary is home to three troops, with a total of 411 individuals. 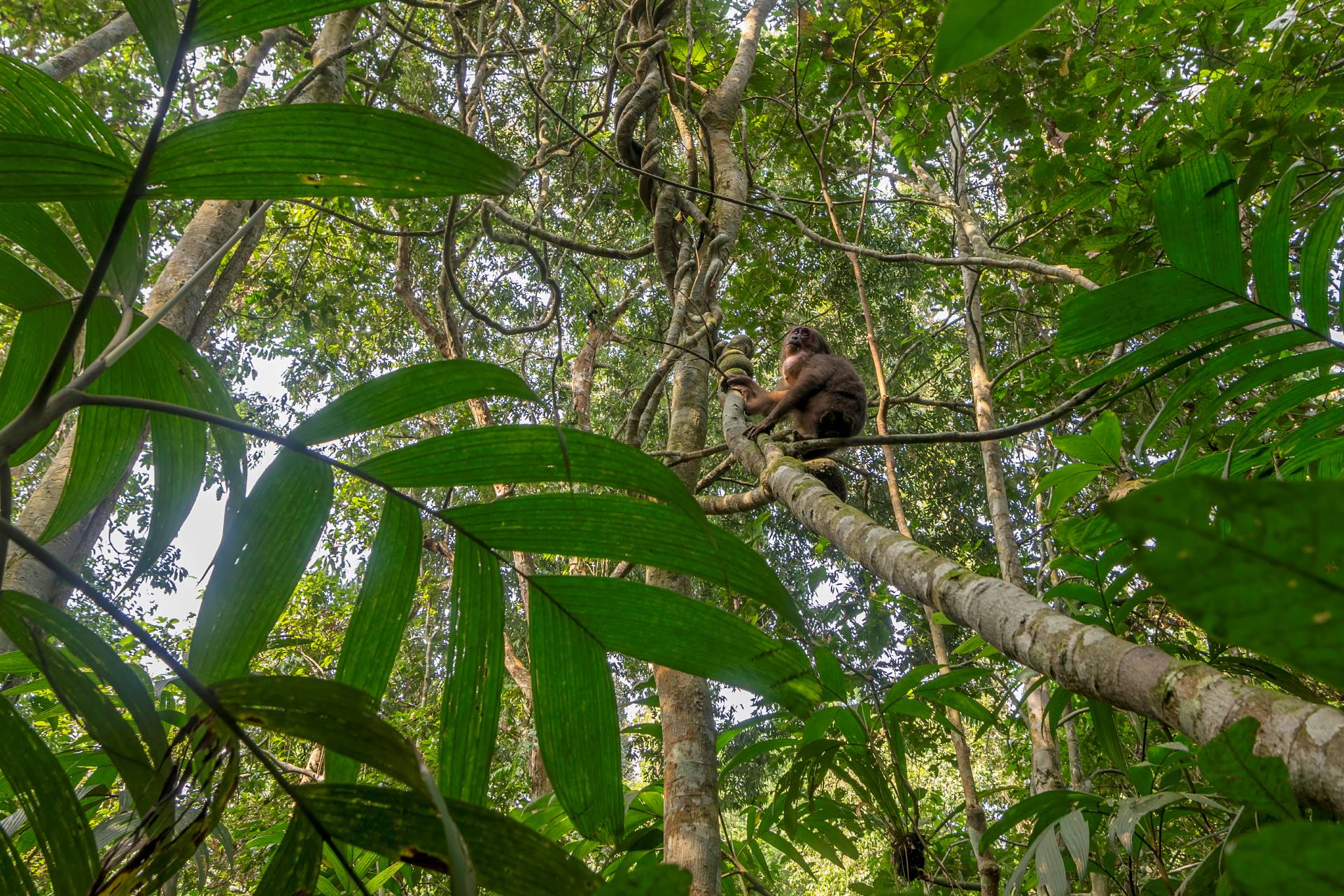 Stump-tailed macaques, seen in semi-evergreen forests of Northeast India, are mostly terrestrial primates, often spotted walking along the forest floor. They climb trees only to feed on fruits and seeds and to sleep. Photo: Udayan Borthakur

Pradeep da receives information of a sighting at the opposite end of the sanctuary. “Short cut”, he says, as he jumps off the path and into the foliage. A man on a mission, he moves like lightning through the almost impenetrable forest. I try to keep up, navigating the protruding roots, fallen trees, branches stabbing at my face, and bloodthirsty leeches like an inexperienced city-slicker. The forest floor dips abruptly into deep craters and rises into mounds of squelchy mud, much like the ocean bed. I lose sight of my guide often, and in the absence of a path, only his voice acts as my compass. 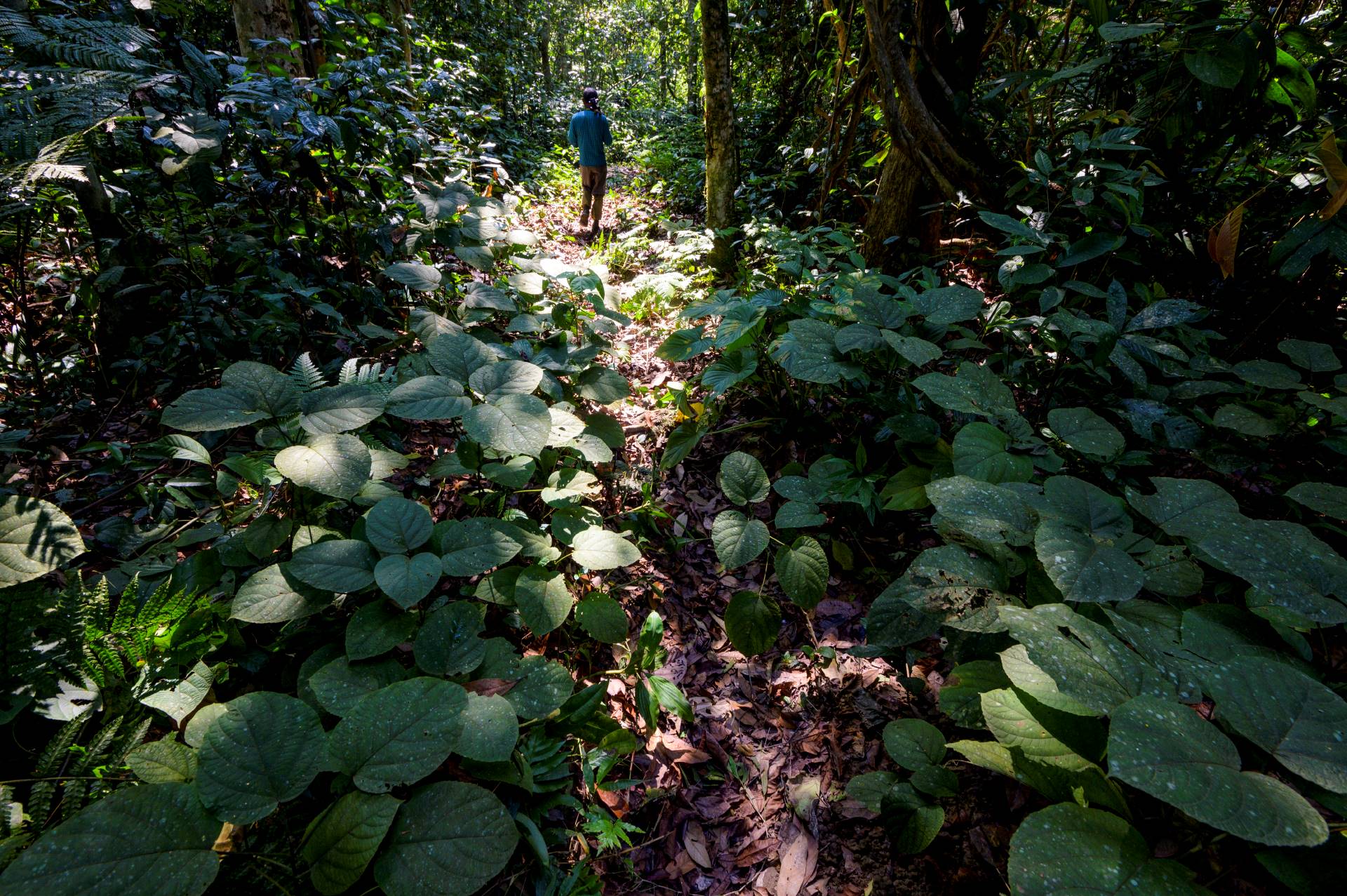 Thanks to stringent restrictions on hunting, and a rich food resource of fruits, seeds and tubers, Assam’s dense Hollongappar Gibbon Sanctuary is the stump-tailed macaque’s safest habitat. Photo: Udayan Borthakur

As we thunder through the jungle, Pradeep da stops many times to investigate the telltale marks of the simians’ presence. Scattered leaves, broken twigs, and flattened grasses provide clues to the direction in which the troop has progressed. Hoolock gibbons prefer fruits, capped langurs mainly eat leaves, pig-tailed macaques forage for insects and seeds, but the stump-tailed macaque is not a fussy eater. “They eat anything and everything,” he says of the diet of the stump-tailed macaques. With a sweeping motion of his arm, he gestures from the forest floor to the canopy. For this wide and voracious eater, leaves, fresh shoots, fruits, seeds, insects are all on the menu. He points to uprooted aathubhanga (literally, broken-knee) plants, telling me that the monkeys will yank the shrub out of the soil to snack on its roots. They will munch on tiny frogs with as much gusto as when they chomp on bamboo shoots.

Stump-tailed macaques start foraging for food at the crack of dawn, and spend all day, traveling and eating. They are voracious omnivores — while they mostly eat fruits, they also feed on tubers, flowers, leaves, roots, crabs, bird eggs, frogs, and insects. Photo: Diganta Gogoi

Even after nearly two hours of running through the foliage, the rare pink-faced macaque eludes us. Locally, they are called sinduri bandor. Among the sanctuary’s primates, stump-tailed macaques are the most populous. As a species that prefers the cover of dense forest, shrinking jungles pose a threat to their numbers.

We’ve just about given up the chase and are back on the forest path, when Pradeep da stops to inspect a path of freshly scattered leaves. Sniffing the air, he declares with certainty that the monkeys are metres from us.

Back into the jungle we go, but this time, we find them within minutes, in a lush bamboo clump. A large male with a darkish brown coat and an ample behind sits on the forest floor, chomping on leaves. As my eyes adjust to the forest’s many hues, I spot at least 10 more of them, up in the branches and on the ground. A female, smaller in stature than the male, turns to inspect us. Long brown fur covers her body, but her hot pink face is hairless, as is the stubby little tail that lends the species its name.

The stump-tailed macaque is easily identified by its strikingly bright reddish-pink face, which turns darker with age. Photo: Udayan Borthakur

Young ones, with paler fur, scurry up the trees when they spot us. Stump-tailed macaques roam the terrain in large, mixed gender groups of 100 or more individuals. 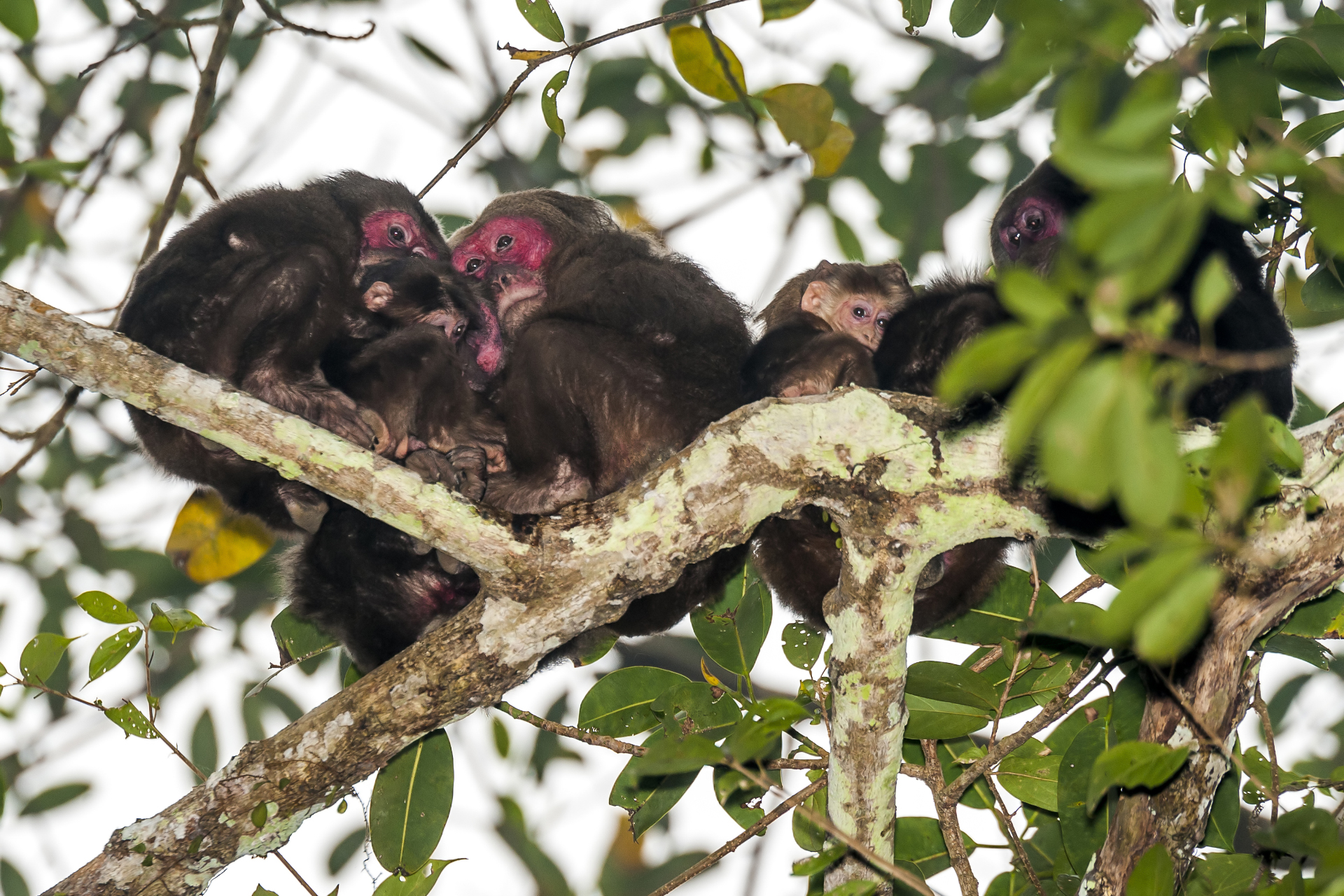 After a long day of foraging, as the sun sets, troops return to their sleeping sites — mostly large trees where they can rest in the safety of numbers, away from the reach of predators. Photo: Udayan Borthakur

As the day draws to a close, an elderly dominant female will identify a suitable ‘sleeping tree’, leading the troop to the night’s rest stop. Tall trees like the ficus are a common choice to spend the night safely, away from predators like the leopard. On our way out of the forest, Pradeep da points to an especially sturdy looking specimen of the ficus and says, “The stump-tailed will sleep here tonight”.