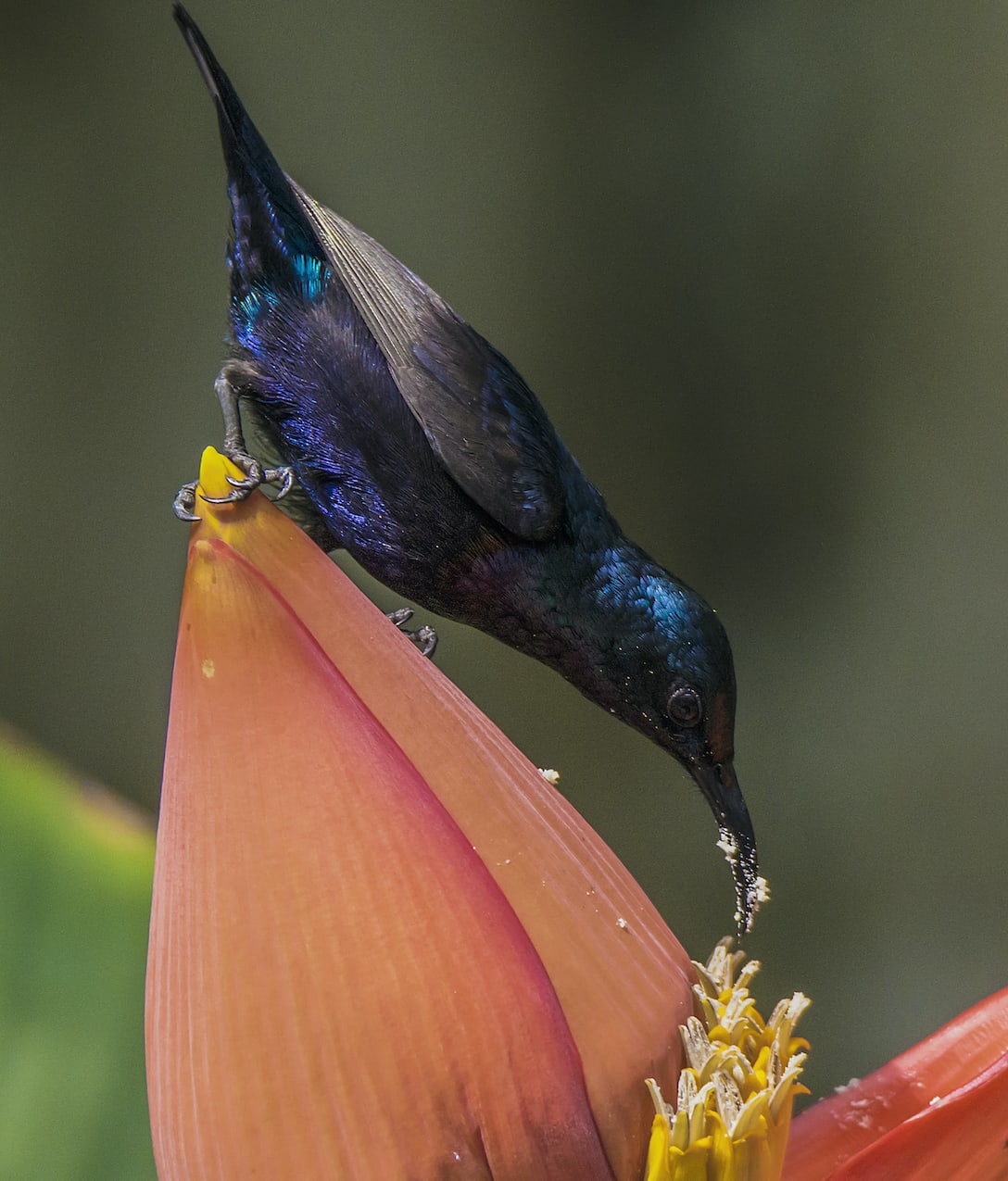 At the freezing tail-end of winter in north India, if there’s one bird that sends my spirits soaring, it is the tiny-tot purple sunbird (Cinnyris asiaticus). Just yesterday afternoon, while sunning myself, I was zapped out of my stupor as I glimpsed this little black bird whiz across my line of sight, leaving a very familiar excitable “swee-swee” greeting in its wake. The popstar was back!

I’m hugely lucky in that one of their main performing stages is an enormous bottle-brush tree right in front of my balcony, which by March is in full bloom and dizzy with birds. But first let me formally introduce this cheerful little clan of birds to you. Firstly, they’re tiny — smaller and slimmer than sparrows. As a clan there are about 145 species worldwide: all over the Indian sub-continent, Africa, the Middle East, and from Southeast Asia all the way to northern Australia. So far, seven species are considered endangered. There are about a dozen of these iridescent little performers in India: though in Delhi we usually encounter only one, the purple sunbird. They are very distantly related to the hummingbirds of South and Central America, which though dazzling in their own way, I think lack the extrovert personality of our sunbirds.

After the breeding season, the male purple sunbird moults its bright feathers for pale olive brown or yellow-grey ones. This relatively dull appearance that the male dons is known as eclipse plumage. Photo: Arijit Mondal
Cover: Heard more often than seen, the purple sunbird (male) is decked in metallic blue and purple overalls. The nectar of flowers draws it to urban gardens.
Cover photo: Arijit Mondal

By February-March this popstar the male purple sunbird begins changing from his casual yellow off-season outfit (with a purple necktie nevertheless) into his sequined, iridescent purple and midnight-blue stage costume. All aglitter, he’s set to perform. Like with many popstars, it’s more the show than any musical talent on display, and again like most popstars it’s all about love. He’ll zip onto a branch in a high-octane state of excitement, fluttering his wings rapidly and belting out his “chweet-chweet-chweet” number at a high pitch, and in doing so displays scarlet and yellow pectoral tufts, the kind of underarm hair no lady could resist, I suppose. As for his ladylove, like many in the avian kingdom, though she’s no looker — clad in olive yellow and greyish-white — he woos her with passion and everything he’s got. And once they get hitched, the couple stays together for good.

The jet fuel for their high-energy lifestyle is nectar from flowering trees and plants like the yellow oleander, hibiscus, cannas, flame of the forest, bottlebrush and of course the red-silk cotton. They cross pollinate them in the process — it’s a neat trade-off. Their bills are long, slender, and curving, and their tubular tongues have brush-tips to suck up the elixir, which is perhaps the only time they may remain still enough for you to get a good fix on them with your binoculars or camera, before they zip from bloom to bloom. And then they’re off, for an encore performance elsewhere. Other high protein items on their menu, especially when they have young to feed, include small insects and spiders.

(Left) The female purple sunbird is olive brown above with a yellowish underside. Sunbirds need to perch to feed, unlike hummingbirds that can feed while hovering over a flower. (Right) Sunbirds use plant fibre, cobwebs, and other stray bits they find to build their nests. They usually suspend the nest from thorny plants, which provides some defence against predators. It is the female (purple-rumped sunbird picture here) that does all the hard work of building the nest. Photos: Arijit Mondal (left), J.M.Garg, CC BY-SA 4.0 (right)

You’d imagine that such a glamour-king would live in palatial quarters like Graceland, but no! Most of the bird literature I’ve seen, diplomatically described their homes and nurseries as “neat oval pouches hanging from the tail end of branches, wrapped in cobweb and decorated with bits of bark” or something of the kind. Well, the purple sunbird’s home alas has always reminded me of a jhuggi-jhopri, cobbled together with cobweb silk and plant fibres and yes decorated with bits of bark and other rubbish. Frankly, it looks a mess! Usually it is suspended from the thin end of a thorny branch — for protection against predators and even brood parasites (like cuckoos) and faces a tree trunk. It’s the poor lady that does all the fetching, carrying, and actual building of the nest, while her husband simply belts out encouragement and praise from a nearby perch, fluttering his wings rapidly. But yes, the star will turn into a doting dad when the eggs hatch and help his wife in feeding the brood. There are often two broods every breeding season, which begins around March and lasts through the monsoon. Often, a pair is not very fussy about location. Several years ago, I was stunned when a purple sunbird couple started building its home, right ahead of our front porch, so that the first thing you saw when you opened the door, was its little hovel. The lady settled into her home and you could see her tiny eyes glittering as she sat and incubated her eggs, a process that usually takes 14-16 days. But alas, some tragedy overcame this unfortunate couple — and one morning the nest simply wasn’t there anymore — possibly the evil machinations of rhesus monkeys or cats, both of which there are too many around where I live.

The male purple-rumped sunbird can be distinguished from the purple sunbird by its light-coloured underside. Male sunbirds are known to flutter their wings and sing to impress females. Photo: Arijit Mondal

If I was delighted by our little purple star, I was completely dazzled by the two others I came across in different parts of the country. In Goa, there was the purple-rumped sunbird (Leptocoma zeylonica), a hugely energetic little bird that gave you very little time to admire its dark brownish-maroon upper side, bright yellow belly with whitish flanks, and metallic hues on its head and neck. Up in the Himalayas, there was the crimson sunbird (Aethopyga siparaja) that really left me gobsmacked as it probed tubular lilies for nectar. With a crimson head, bottle green crown, malar (cheekbone) stripes and mantle, and a scarlet throat, it flashed a glittering emerald green tail that left you breathless with admiration. In both cases, the ladies were duller in shades of greyish-white.

There are several other sunbirds scattered around India with which I still have to make my acquaintance. They have exotic names like the fire-tailed sunbird, green-tailed sunbird, Mrs Gould’s sunbird, and Loten’s sunbird. All these bejewelled little extroverts delight hearts everywhere. In the meanwhile, I shall wait eagerly for my own little purple popstars to begin their glittering show.