Out of Sight: The Rann, Thar, and the Great Indian Bustard

Inhabitant of the grasslands of western India, this critically endangered species needs all the help it can get to bring it back from the brink of extinction

In the distance, somewhere near Lathi, I saw its silhouette against the setting sun. Between two tall khejri trees, and on top of a raised green clearing, the figure appeared. Adjusting my binoculars and tilting my head helped make the apparition clearer. Regal in its stance it was unmistakably a male great Indian bustard (GIB) — truly a splendid sight. This was the first time I had seen one in the wild, and it is a day that will stay etched in my mind forever.

My team and I had been in search of this bird all week, since my arrival in Jaisalmer from Delhi. We were doing line transects and collecting feathers and faecal samples, the telltale signs of the bird. Towards the end of the week we got a call from a local forest guard 60 km away, informing us of the presence of a GIB. My team and I eagerly travelled to this spot and got to see this bird in all its glory.

The GIB is a magnificent bird with males sometimes as tall as 4.5 feet and weighing 15-17 kilos. It is the heaviest flying bird in all of Asia. An opportunist and an omnivore it is a friend of farmers as it loves eating insects.

In the past the GIB was hunted on the belief that its meat contained aphrodisiac qualities. Of course this is not true, but it led to a systematic decimation of thousands of birds over the course of a couple of hundred years. In the 1960s there was a motley crew of 1,000 or so birds left in the world and this number kept on declining to the point we have now, where the GIB is on the IUCN Red List as critically endangered, with only about 120 left in the wild according to the WII survey.

The GIB is a k-selected species, which in layman’s terms means a species that invests significant energy in one offspring at a time, and has a relatively long life span. GIBs can live for up to 40 years, and females produce one chick a year.

These birds occupy grassland habitats, which have also been significantly lost over time. The British considered land to either be forested or wasteland. Grasslands according to them were barren wastelands as they were not as profitable as timber. Over time, agriculture fields, pastures, and industry took over these so-called wastelands and encroached upon the GIB’s natural habitat, forcing it to exist in small pockets across the country, predominantly in Jaisalmer and Kutch (Kachchh).

A more recent threat is that of power lines. During 2018, five GIB deaths were attributed to the birds crashing into power lines at high speed. Their field of vision does not allow them to see what is directly in front of them while they are flying and they suffer fatally due to this flaw.

Monitoring and punishing poaching, making power lines underground, attaching devices that signal the presence of lines to the birds (bird diverters), and protecting grassland habitats are immediate measures needed to help recover the species. The Green Tribunal of India has specially outlined these action items to be taken up by the government to restore wild populations of the GIB. 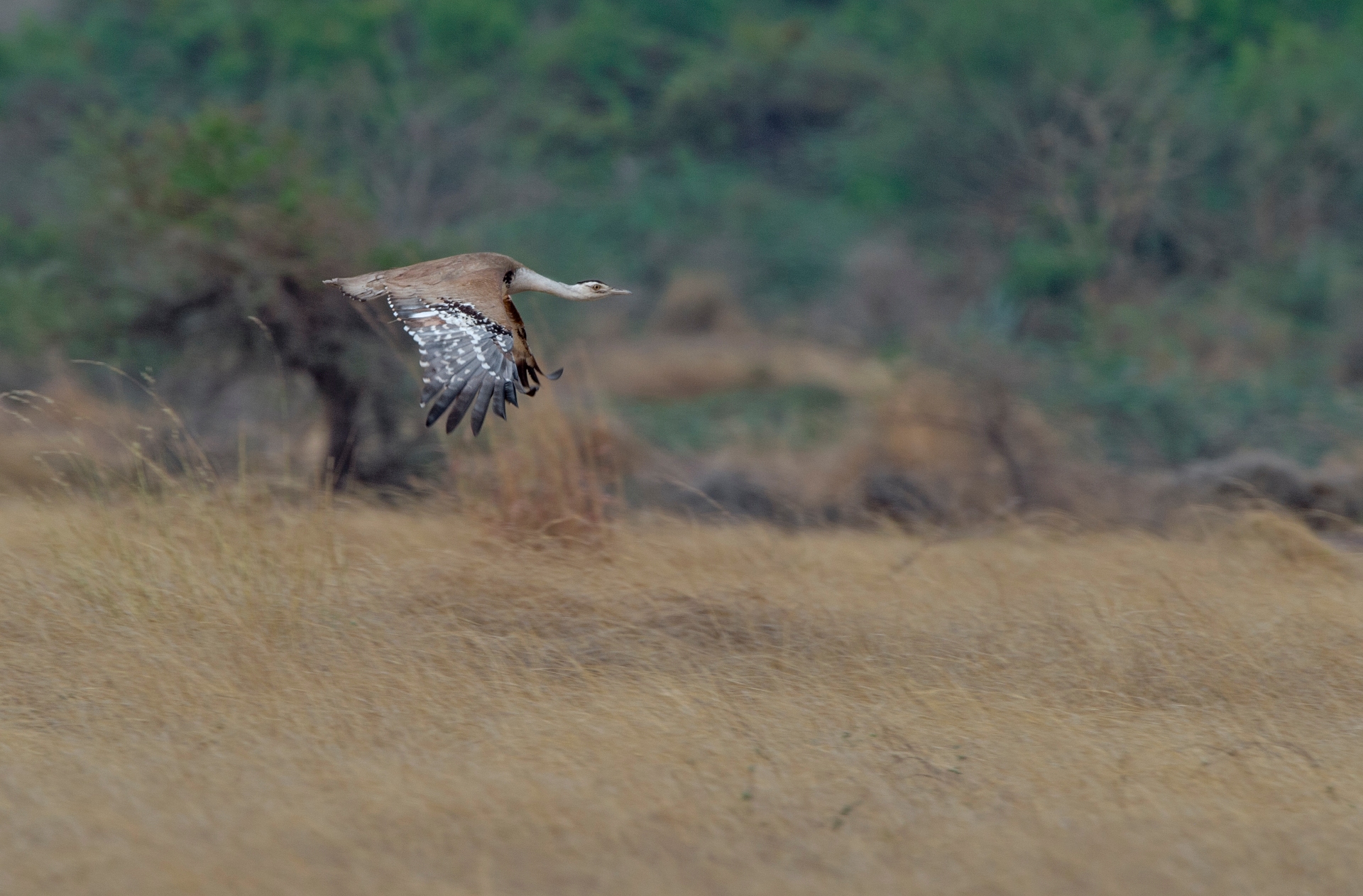 The heavily-built great Indian bustard is not an expert flier. It keeps low, and spends most of its time foraging in its grassland habitat. Photo: Dhritiman Mukherjee Great Indian bustards are ostrich-like birds once found across Western India. Today, a small, endangered population exists mostly in Rajasthan, Gujarat, and Maharashtra. This bird was spotted in Nannaj, Maharashtra. Cover Photo: Dhritiman Mukherjee

In the meantime, a conservation breeding effort has been started in Jaisalmer by the Wildlife Institute of India (WII). The aim is to create an insurance population against extinction, and for the GIB to be eventually released into the wild. I currently work on this aspect of the project and manage the welfare, health, and safety of our GIB chicks along with my WII team.

My love affair with bustards started when I was a child. I explored the bright white salt flats of Kutch with my parents in an annual winter pilgrimage to see the flamingos, wild asses, and other birds and animals in the rann or desert. On this particular trip we were heading towards Naliya, the western most part of India. I must have been nine year’s old. It was early in the morning and even though I was groggy, I was alert to the birds around us. A friend of my father’s, a wildlife enthusiast and a local ‘bapu’ or local prince, who was leading our small but determined expedition. Over many years of living in and exploring the desert, he had developed a keen sense for spotting signs of birds. He had pointed in the distance, and I had seen it immediately: a McQueen’s bustard also known as the Houbara bustard, stepping cautiously away from us. It suddenly jumped up and jauntily took flight, gliding off into the distance. The sandy hues of its plumage mirrored the landscape. Had we not been with a trained eye we would have surely missed the bird because of its stellar camouflage. 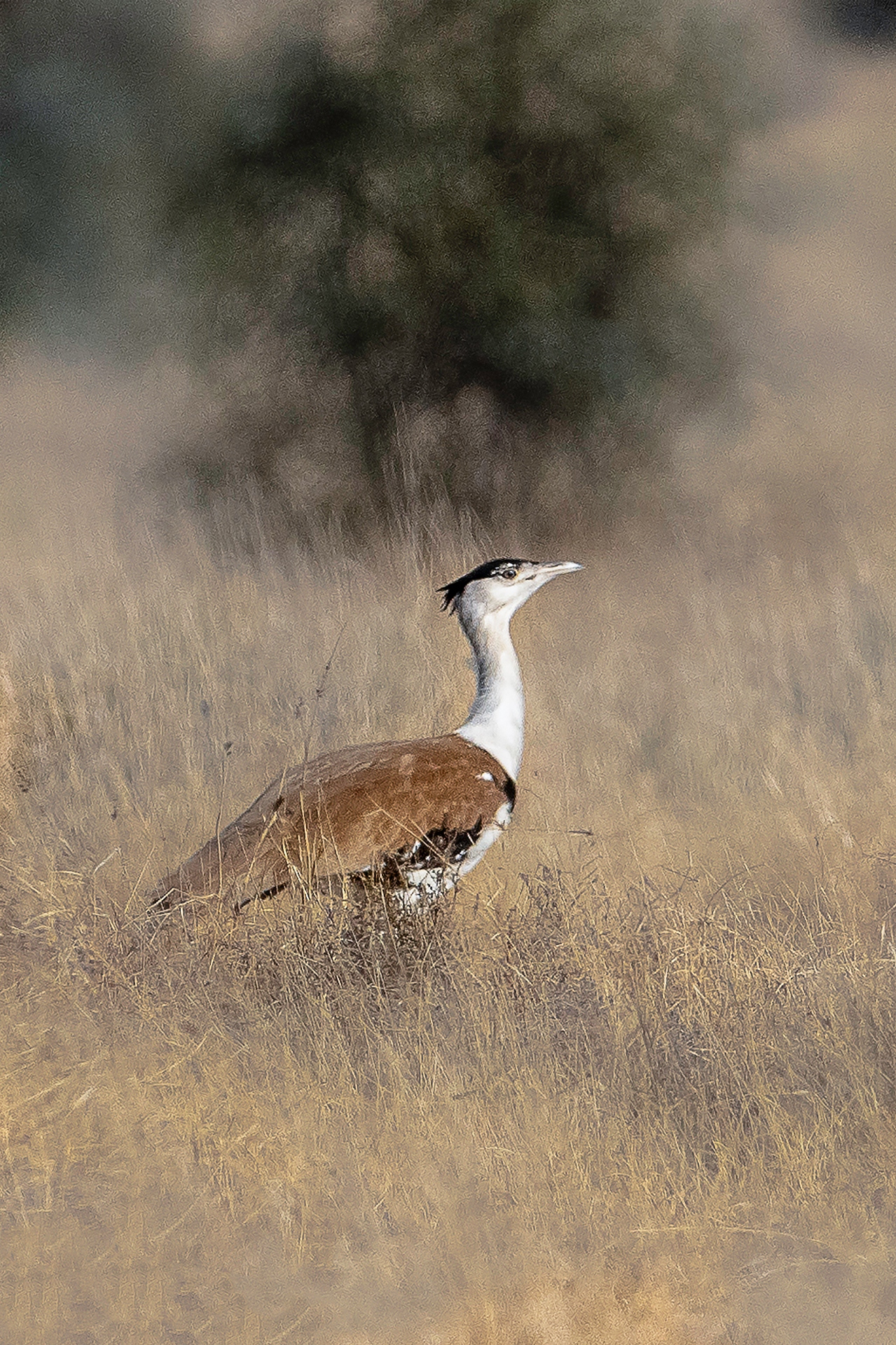 The great Indian bustard was once in the running to become the national bird of India, strongly supported by ornithologist Salim Ali. However, some accounts say the Indian peafowl won, mostly because the jurors were afraid the GIB’s name could be easily misspelt. Photo: Aseem Kumar Kothiala

During that trip, we saw many other birds that captivated me and I fervently flipped through the pages of Salim Ali’s book on Indian birds. Yet, no other birds held my attention quite like the bustard. It was a dinosaur, a relic belonging to another time, appearing as a mythical bird of the grasses and desert before me. I fell in love with bustards.

The next year is when my love for the GIB blossomed. My mother was acting in a movie that was being shot near Naliya, and my father and I journeyed there to visit her, to a spot similar to one we’d visited the year before. On her break from shooting, we took a camel ride and then a jeep trip out to discover the scrubby wilderness close to the border with Pakistan. We did not see a GIB, but my mother told me she had seen one a week ago. She described its languid gait, its bright white neck contrasting against the clear blue sky. When we came back to the escarpment that she called the actor’s room (a makeshift green room and a place to wait for your next scene) she presented me with a photograph of the GIB. Till this point I had only seen illustrations of the bird, but to see an actual photograph was exciting. 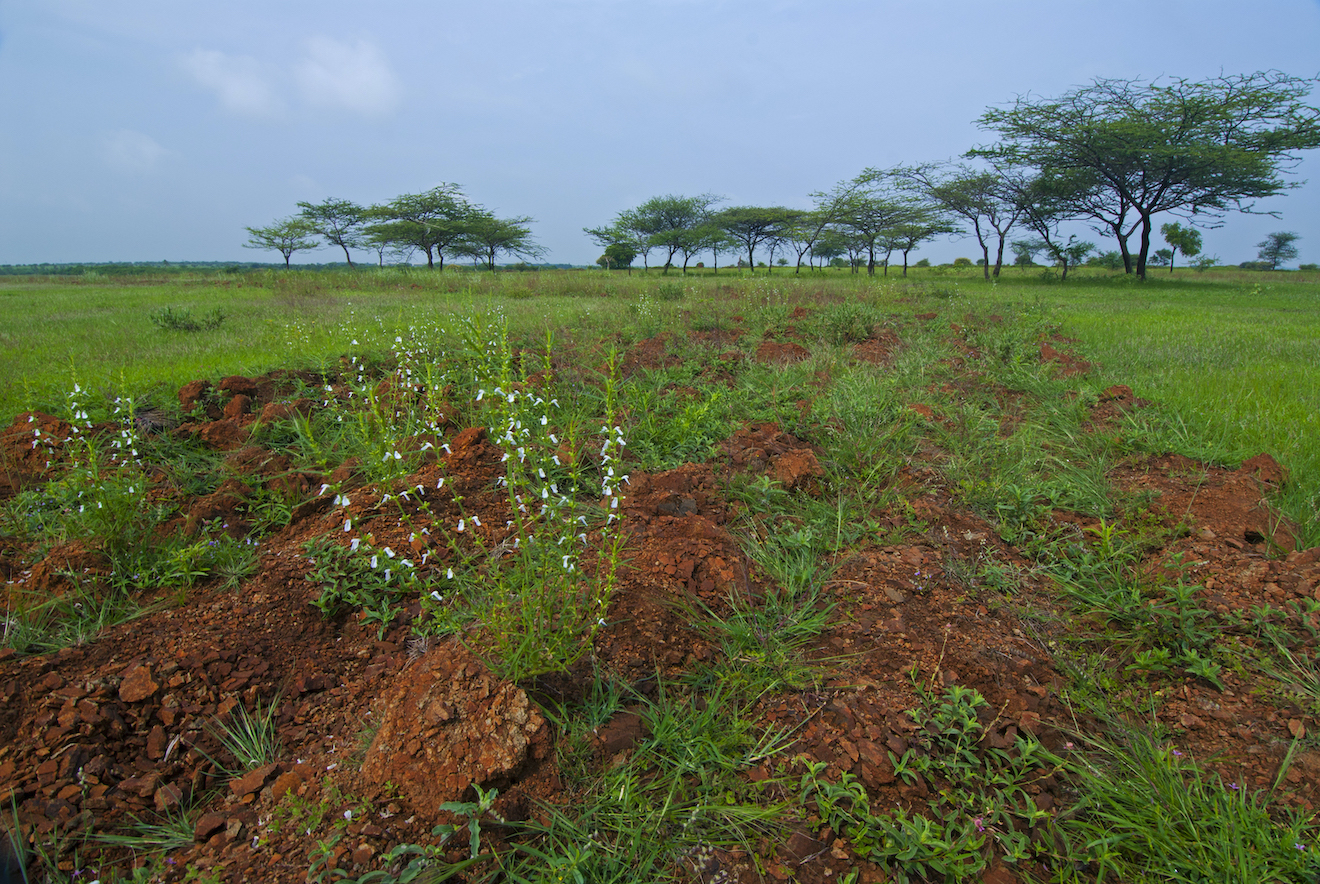 The grasslands that host the GIB can go on for kilometres, with grass high as an average adult’s waist. The abundance of invertebrates, rodents, and berries hidden among these grasses provides nourishment for the birds. They can safely hide among the tall grasses and rear their young as well.

Arid regions that the GIB makes its home come alive during the monsoon season. This is when grasses grow again and where GIB males can be seen in display mode, attempting to woo a female. A male will climb on top of an elevated hill, puff up the air sac in its neck, and make a booming sound calling out to GIB females. It is an impressive sight. 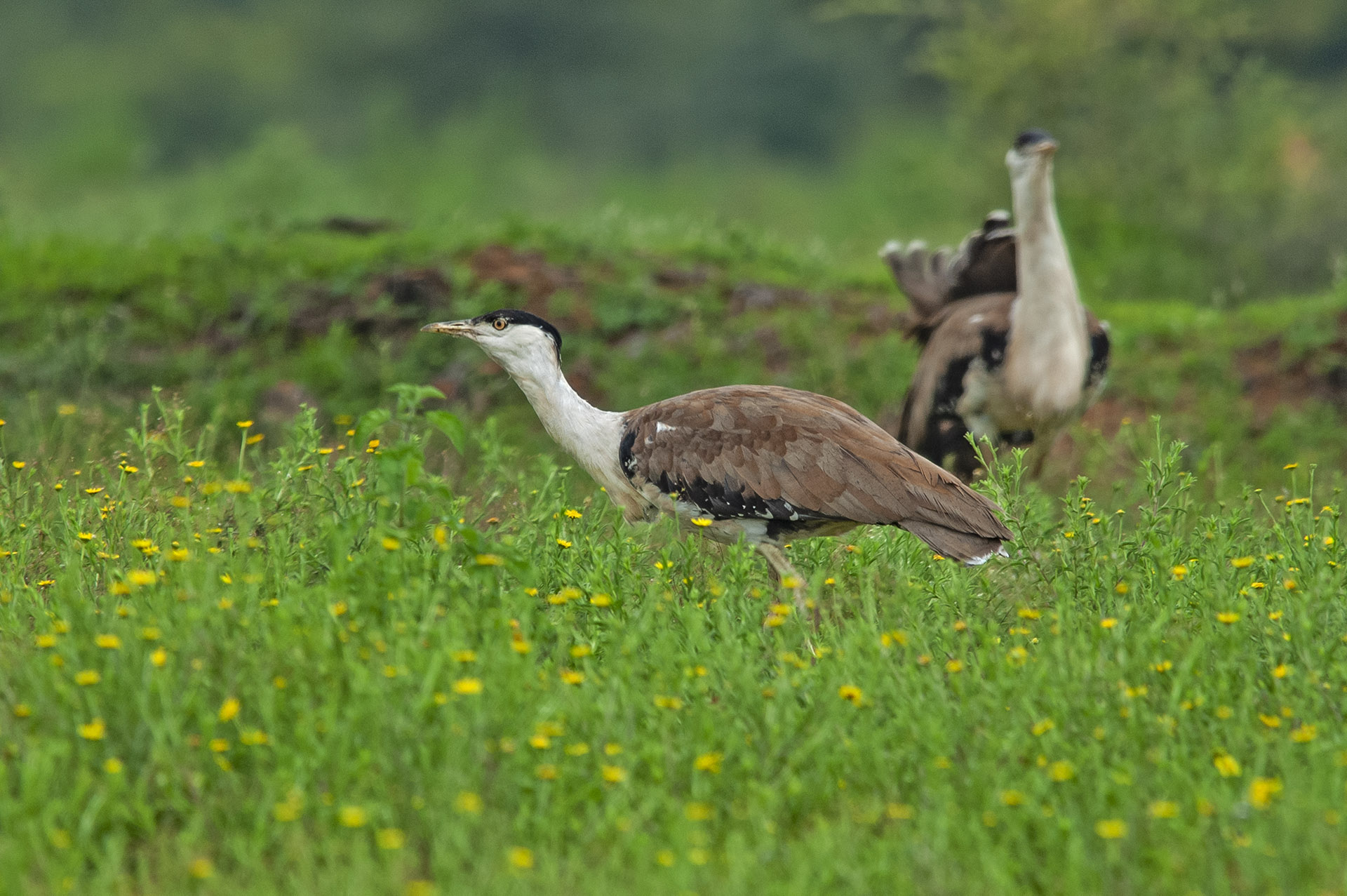 The summer and monsoon are mating seasons for great Indian bustards. Chicks are born around the monsoon, when insects, reptiles, and worms are in abundance and are easy food for the young ones. Photo: Dhritiman Mukherjee

In my time working with GIBs I have been fortunate enough to have had countless sightings of the many birds that live in the Jaisalmer habitat. I was also part of the team that radio tagged the first GIB in the Thar landscape. The team at the Wildlife Institute of India is committed to bringing the GIB back from the brink of extinction. I have explored the glorious grasslands of the bustards, enjoyed cotton-candy sunsets in the Thar, watched the nightly magic show of the Milky Way unfurl against the darkest skies in all of India, and it has been an honour and a privilege. Life has come full circle for me and hopefully the same will be true for the critically endangered GIB, where we will see it roam wild and free in all its old habitats. 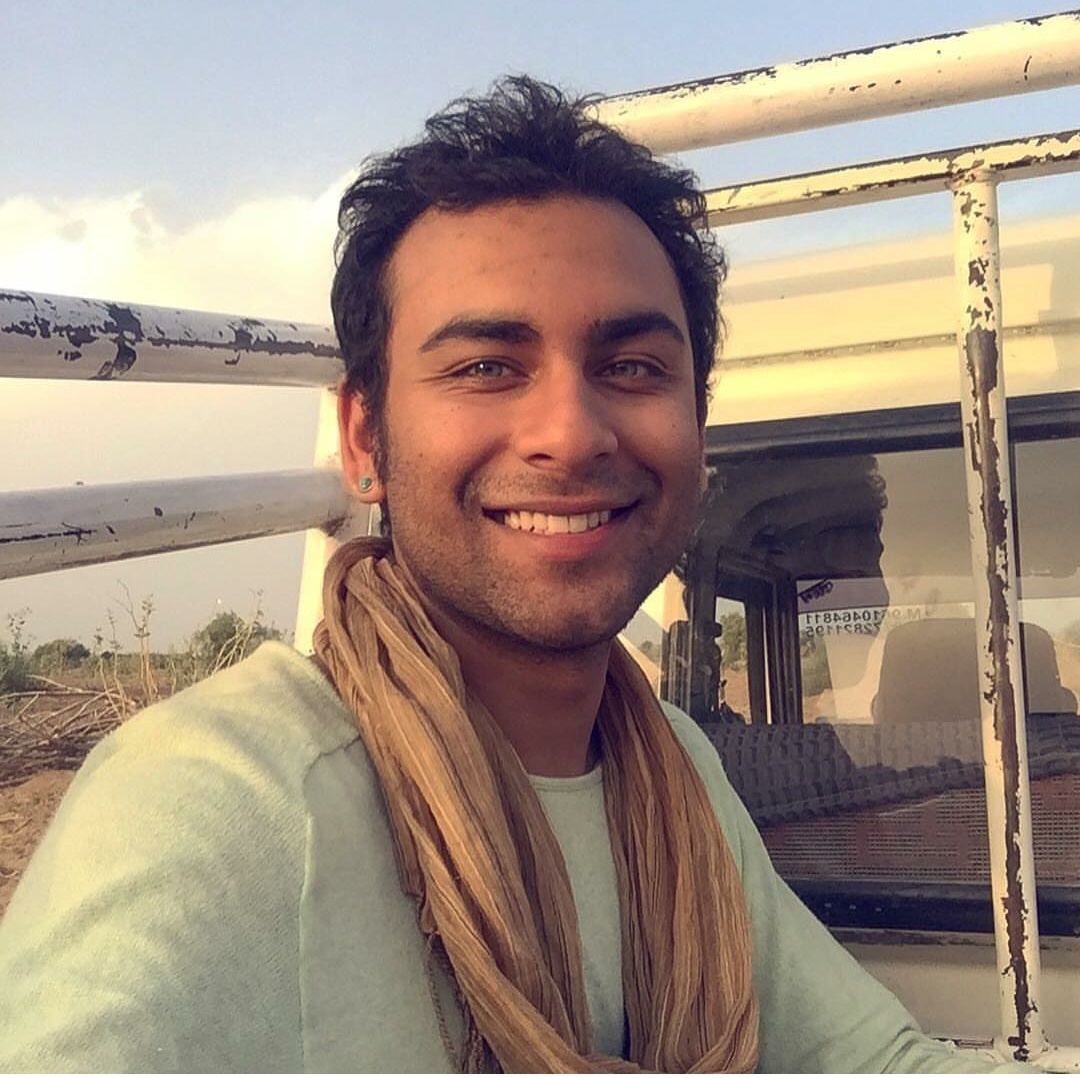 works on a GIB conservation project with the Wildlife Institute of India. He has a Masters in Conservation Biology and Public Policy from the University of Maryland, College Park, USA.