A brief history of the decline of this enormous, endangered bird and the community-driven initiatives that have given it a new lease of life

Young ladies who have grown up reading Mills & Boon romance novels know the acronym TDH well. For me however, TDH invokes the image of one of the largest birds of the Indian subcontinent — the greater adjutant. Standing at 1.5 metres in height, it is certainly tall. Its dark upper parts and wings give it an appearance of duskiness (juveniles are darker than adults). And for me, it is quite handsome, with its fashionably bald head, penetrating white eyes, large red gular pouch, and a scruff of white feathers around its neck. Some have called it ugly and dirty, but to me it is truly: Tall, Dark and Handsome.

Another thing I find fascinating about this bird is its name: ‘adjutant’. In dictionary terms, the word ‘adjutant’ means a loyal deputy or follower. In army parlance, an adjutant is a military officer who acts as an administrative assistant to a senior officer. The word has Latin origins where juvare means “to help, support”. Imagine a young officer helping an older commanding officer, following him dutifully everywhere. Whoever gave the bird this name must have observed these regal birds walking silently, one after another, in military style. Additionally, its scientific name is Leptoptilos dubius. Why dubious? Perhaps because earlier scientists were confused of its evolutionary antecedents, and couldn’t quite place the bird in the systematic order of birds.

Over the last century, the greater adjutant’s population saw a dramatic decline, only to be revived over the last decade by grassroots efforts in local communities. Photo: Udayan Borthakur Cover image: Dhritiman Mukherjee

My first encounter with this large majestic creature was in Keoladeo National Park, Bharatpur in 1981 when I saw a single individual, then referred to as the greater adjutant stork. After that I saw six birds in Bihar in 1985 while driving to Assam to study the Bengal florican. More were sighted in Assam, their last stronghold in India, on small marshes and on carcasses alongside vultures. Every sighting convinced me that I should study these birds. This was a time before the Internet and Google searches, so the library of the Bombay Natural History Society in Mumbai came to my rescue. My curiosity was heightened when I read that vast breeding colonies in Myanmar had suddenly disappeared, drastically declining the species global population. The greater adjutant was once so common in the erstwhile undivided Bengal and in Kolkata, that the Calcutta Municipal Corporation had a greater adjutant on its logo.

Due to its feeding habits and association with vultures and other scavengers, it is generally not hunted for food, and it happily lives in the countryside. Why then did it decline so much in 100 years? IUCN and BirdLife International have listed it as ‘Endangered’ in their Red List. This led me to write a project proposal on storks of India, with three of my students working on this for their PhD degrees.

Greater adjutants are colonial nesters, which means that several pairs will build nests on a single tree. They nest mostly on large trees that have sparse foliage, which allows them to take off and land with ease. Photo courtesy: Arvind Mishra

Dr Hilloljyoti Sangha’s work on the greater adjutant in Nagaon, Assam was a pioneering study that revealed that lack of food could be the main reason for the bird’s decline. Extensive fishing by humans had depleted this piscivorous bird’s food sources. It also eats frogs, aquatic snakes, snails, and unwary birds, but intensive use of wetlands and their conversion to crop fields have reduced the adjutants’ areas for foraging. Perhaps the extensive use of pesticides in these fields has further contributed to its depleted population.

Greater adjutants nest on tall, stout trees, sometimes within human habitations, but these tall trees are themselves in trouble. During our research we have found that often villagers cut tall trees on their land to repay a loan or to acquire money for a family wedding.

From the mid-1990s another problem has occurred. There has been a massive decline of vultures, resulting in an enormous increase in stray dog populations, which do not allow the birds to come near the carcasses. It is also eaten by some communities in Northeast India. As a result, except for Assam, the adjutant has disappeared from Nagaland, Meghalaya, Arunachal, Tripura, Manipur, and Mizoram. In short, this large bird was in serious trouble.

Arvind Mishra, founder of the Mandar Nature Club, has been working with local communities in Bihar to raise awareness, and involve them in the protection of nests and conservation of the greater adjutant. Photo courtesy: Arvind Mishra

While the news from Assam was alarming, good news started trickling from Bihar. Arvind Mishra, founder of Mandar Nature Club, Bhagalpur excitedly contacted me in 2006 to tell that he had found a colony of greater adjutants in Bhagalpur district. Villagers knew about the bird as they bred on tall trees and foraged in their crop fields, but it was unknown to conservationists. Locals considered it a useful bird as it ate rats and snakes, when the fields were flooded for rice cultivation. I have seen farmers sowing or weeding crops with greater adjutants standing nearby to pounce on an escaping rat or snake. Thanks to the effort of Arvind Mishra and the support of local people, now more than 300 greater adjutants are found in Bihar. In the 2018-19 breeding season they were able to raise 150-160 juveniles. Spread over a few hundred square kilometres, this area in Bihar is perhaps the world’s largest breeding colony of this endangered bird. 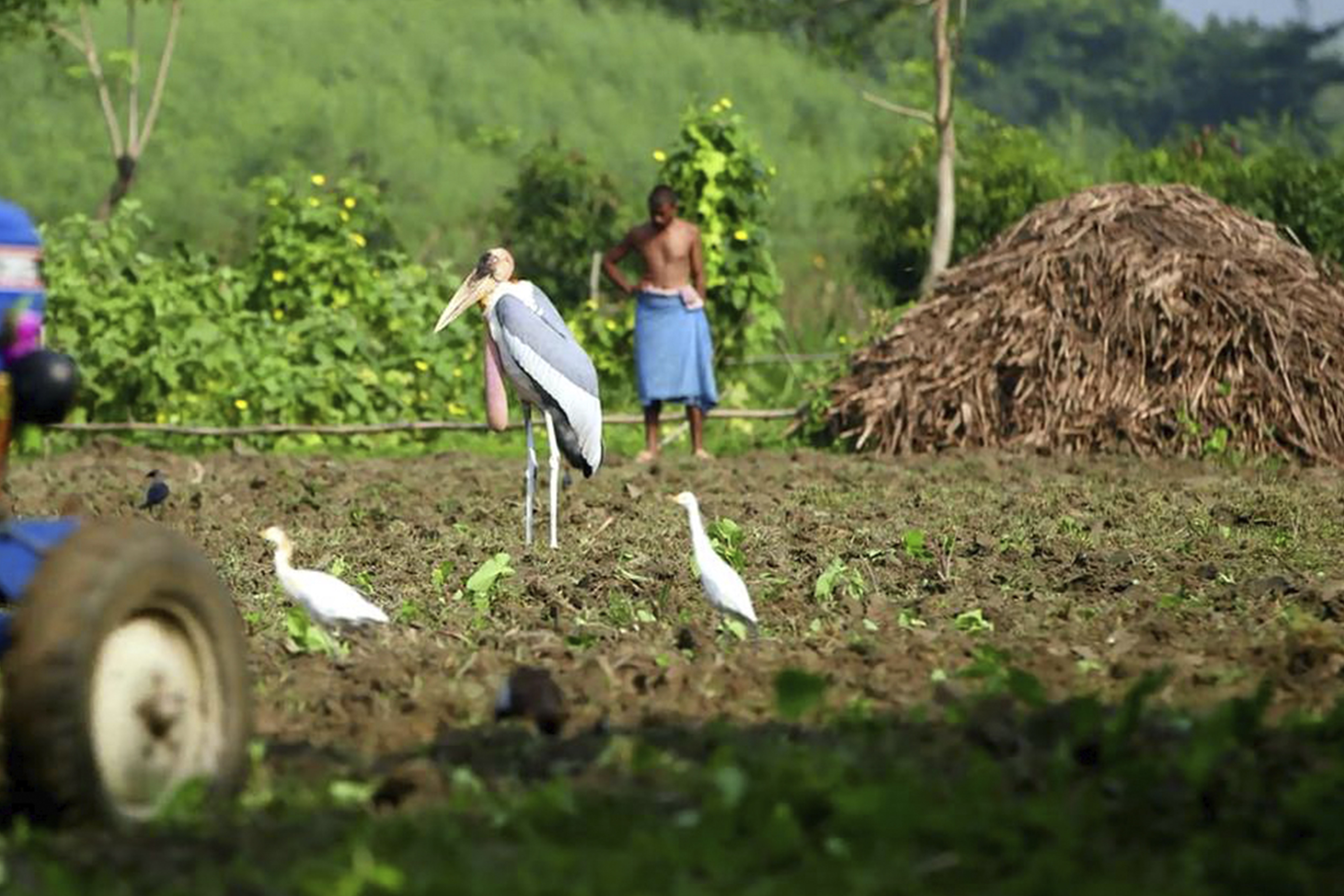 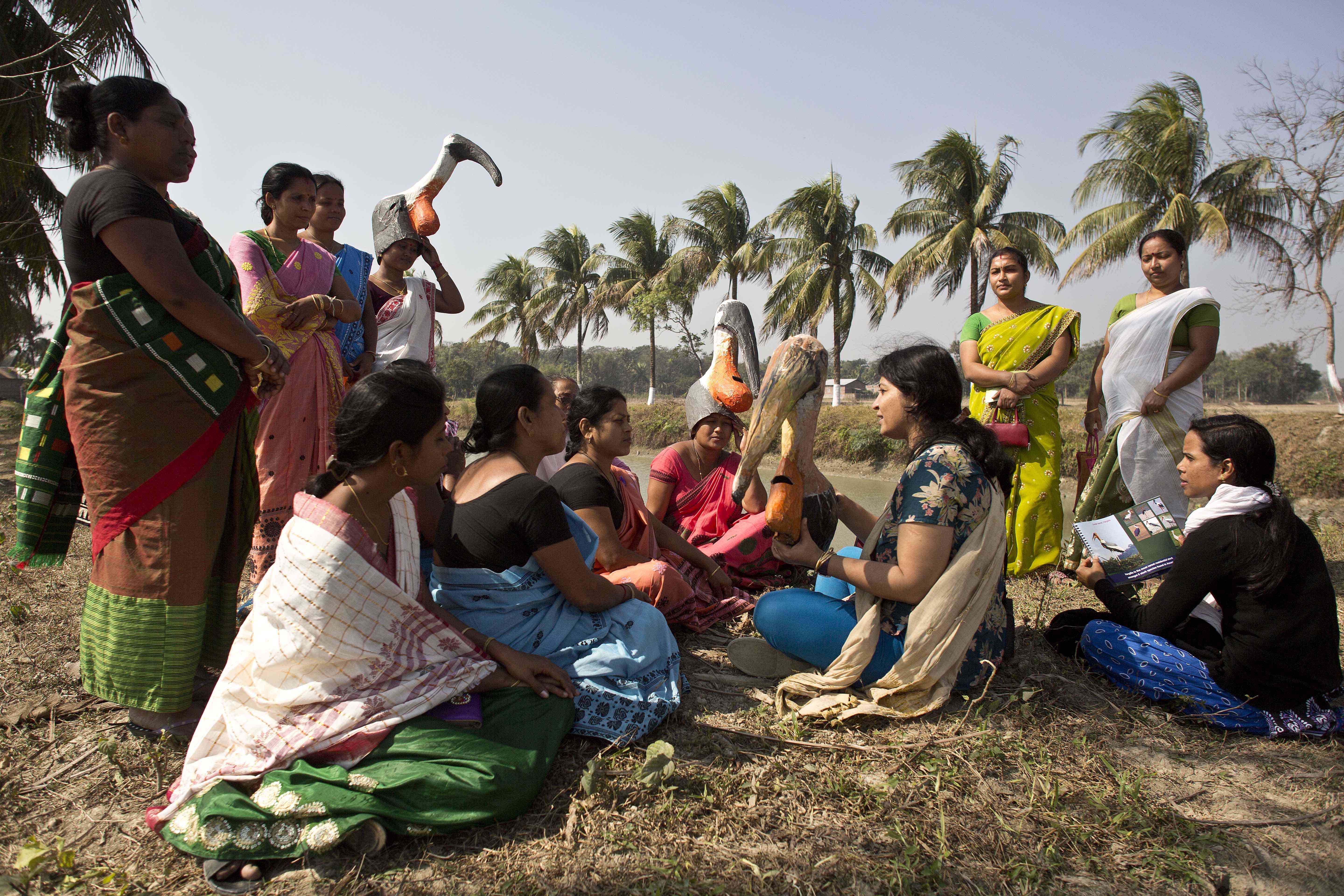 Left: Thanks to conservation efforts in Bihar, the greater adjutant lives alongside communities and comfortably strolls amidst locals in a busy field of crop. Photo courtesy: Arvind Mishra Right: A local community of women near Dadara in Assam work with conservationist Purnima Barman to save the greater adjutant. They are popularly known as the Hargila Army or the Greater Adjutant’s Army. Photo: Anupam Nath

Another remarkable effort involving local people is the work done by Dr Purnima Barman in Dadara area near Guwahati. This famous conservationist considers all adjutants her children, and has made the locals proud of their ‘hargila’ (the adjutant’s local name in Assamese). Purnima is now called ‘hargila baideo,’ or ‘hargila sister’. Her passion for protecting these birds and the remarkable work she has done have brought her national and international laurels, and given a new lease of life to the declining colony of the greater adjutants.

How many greater adjutant still survive in the world? Bihar now has 450, and similar numbers exist in Assam. There is no breeding record in Bangladesh, unknown low numbers in Myanmar, and maybe 150-160 live in Cambodia. The total world population of this bird is at best between 1,500 and 1,800. While this number is low, the community-driven work of Arvind Mishra and Purnima Barman proves that if we involve local people in conservation efforts, many species can be saved. This must be the conservation paradigm for all the species that live in human-dominated landscapes.