Cross Connections: The Story of Humans, Urial, and their Kin

The role of wild sheep in the trajectory of human growth, and other compelling reasons to protect the urial and its habitat 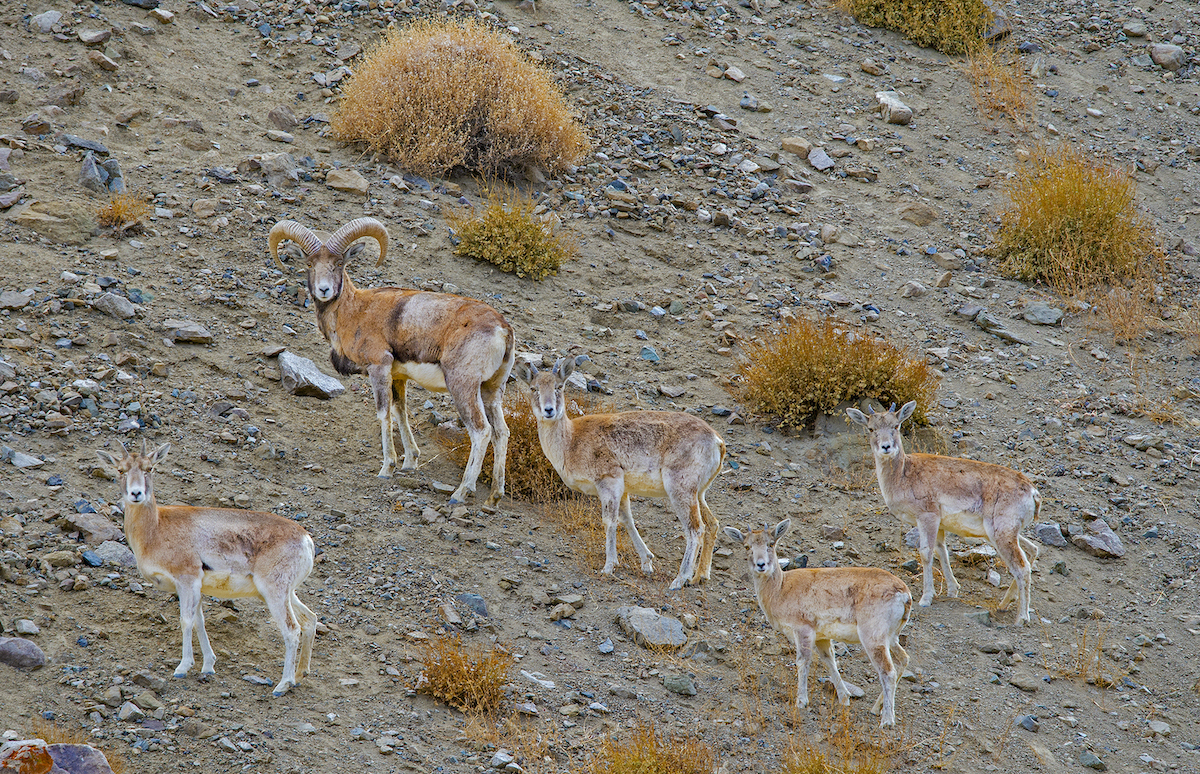 Some eleven thousand years ago, on the Anatolian peninsula, in parts of present day Turkey and northwest Iran, some of our ancestors caught and began rearing wild individuals of a species scientists today call Ovis orientalis. This is thought to be the first ever domestication of livestock by humans. Ovis orientalis, under domestication, evolved into present day farm sheep, Ovis aries.

Evolution of species typically takes a long time and a many generations. Humans, or Homo sapiens, the only survivors amongst the several hominid species that once roamed the Earth, have been around, as we know them, for about 6,000 to 9,000 generations — a mere blip in the history of the origin and evolution of life that began some four billion years ago. Genetic evolution played a critical role in the spectacular success of humans as a species. But there was another force that acted alongside genetic evolution to enable the unprecedented growth and dominance of humans: cultural evolution. Cultural evolution is often brought about by accidental associations and transmission of ideas, and helps species adapt to change and evolve. While genetic evolution tends to be slow, cultural evolution can progress much faster. It helped hominids cross significant thresholds, such as the control and use of fire, the development of language, and the domestication of animals and plants.

Contrary to popular belief, the domestication of animals that we call livestock today began as a strategy for meat rather than milk production. In fact, it couldn’t have been a dairy strategy because our biology at the time would not have permitted it. Lactose intolerance, that afflicts a significant proportion of the human population, is not an exception or a disease, but rather, from an evolutionary perspective, the norm. Sugar lactose is an ingredient in human and animal milk; and in order to digest it, the body must produce an enzyme called lactase. Babies produce it, but by the time of weaning, the majority of humans stop producing lactase, thereby losing their ability to digest milk.

The rearing of animals for meat created opportunities for our ancestors to start consuming milk in adulthood, but a significant biological constraint in the form of adult lactose intolerance stood in the way. Genetic evolution provided the way out. While most mutations tend to be harmful, per chance, a useful mutation arose and spread in humans — or at least a significant proportion (25 per cent) of humans. It allowed lactase production to persist well after weaning into adulthood, allowing individuals to become lactose tolerant. Thus, in the last 400 generations or so, humans, especially those in livestock rearing communities, largely became lactose tolerant and acquired the ability to digest milk in adulthood. Indeed, it was only 6,000 or 7,000 years after the initial domestication that rearing for milk and wool began through selective breeding.

An alert female Ladakh urial looks on. Females tend to be more skittish as they have the added responsibility of ensuring the safety of their offspring. Photo: Dhritiman Mukherjee

Ovis orientalis, the original wild sheep from which domestics evolved, has continued to persist in the mountainous river valleys of southwest Asia. It is known as the mouflon in Anatolia and surrounding regions, and as the urial further east and south. Over its range, several subspecies are thought to occur, although the taxonomical status of the mouflon, the urial, and their presumed subspecies is debated. At the easternmost limit of the current distribution of Ovis orientalis, the animal is known as the Ladakh urial, occurring today in parts of Ladakh (India) and Gilgit-Baltistan (Pakistan).

I first encountered the Ladakh urial in the wild in the late 1990s. The herd I saw was moving on a relatively steep slope on the southern side of the River Indus, not far from Leh. I have observed several herds of urial on multiple visits to Ladakh since.

In 2002, my searches for the Afghan urial weren’t so successful. During assessments in the Afghan Pamirs I was conducting on behalf of the United Nations, I saw their relatives, the Marco Polo sheep, a subspecies of the argali (Ovis ammon), but failed to see urial. I did find a pair of urial horns, indicating their presence in the region, and confirmed by ecologists in subsequent surveys.

The mouflon I had seen in Hoge Velue National Park in the Netherlands in 1997, where they don’t occur naturally, but had been introduced by people about 100 years ago. More recently, I saw the mouflon again in Cyprus. That is another fascinating story: the ‘wild’ mouflon of the Mediterranean islands of Corsica, Cyprus, Rhodes, and Sardinia were also introduced by humans, but in this case some 8,000-9,000 years ago.

I was also fortunate to glimpse the big horn sheep Ovis canadensis in Colorado, one of the three wild sheep species of North America. These species evolved from an ancestral Asian stock of the snow sheep Ovis nivicola that crossed over to North America from Siberia through Alaska some 750,000 years ago during the ice ages, when the Bering Strait was a land bridge connecting the two continents. Indeed, the same land bridge was used by Homo sapiens to cross over to the Americas for the first time some 17,000 years ago.

As for Ovis orientalis, it dawned upon me much after I first saw them that, but for their domestication, along with a handful of other species of animals and plants, humans would have followed a very different civilisational trajectory. Domestication led to food surpluses, humans settling down and creating villages, land tenure, civilisation, and, eventually, the ideas of nations and empires.

Two things did strike me as I watched Ladakh urial for the first time. First, how impressive the animals looked with their reddish-brown coats radiating in the sun, and their large curved horns. Second, it appeared to me that despite their graceful appearance and elegant movements, they were a bit out of place on the steep slopes they were navigating. In comparison to species such as the ibex that are of relatively stockier build and live on cliffs and steep slopes, the urial look somewhat dainty, their movements ever so slightly gazelle-like.

It appears that Ovis orientalis is a species that, although occurring in hilly regions, evolved to live on the relatively gentler rolling slopes along river valleys. This explains their slightly leaner build and musculature compared to cliff-dwelling species. They probably evolved to outrun predators such as the wolf, rather than take refuge on cliffs. For our ancestors, this might have made it easier to hunt them, and indeed, to capture and domesticate them.

This “bachelor herd” herd of Ladakh urial are on a steep slope. Adult males tend to segregate away from the females during summer. Photo: Arindam Bhattacharya

Unfortunately for Ovis orientalis, the habitat it evolved and adapted to live in has also been sought after by Homo sapiens for a long time. Across the high mountains of Asia, our ancestors mainly settled along river valleys. Over the centuries, what used to be the prime habitat of Ovis orientalis seems to have become prime land for people, giving way to villages and crop fields. The regions along the Indus and Shayok rivers, for example, where most of the Ladakh urial population occurs today, have amongst the highest human density anywhere in Ladakh.

This implies that the Ladakh urial, and perhaps other urial and mouflon as well, have been historically relegated to suboptimal habitats, pushed out by human settlements into relatively higher and steeper areas. But the challenges to the species don’t end there.

In regions around the Tibetan Plateau, the higher altitudes are occupied by another, more abundant wild species, blue sheep or Pseudois nayaur. A study by one of our former PhD students, Dr Tsewang Namgail, showed that there was high potential for competition between urial and blue sheep, which probably played a role in restricting the distribution of Ladakh urial. And to add to these challenges, even on the slopes that urial are able to use, they face potential competition and the risk of disease transmission from livestock grazing and persecution by free-ranging stray dogs.

There are perhaps less than 2,000 Ladakh urial surviving in India, around 500 in Pakistan, which, incidentally also harbours some 5,000-8,000 Afghan urial and 1,500 Punjab urial. The animal has faced considerable hunting pressures. Although hunting has largely been brought under control in Ladakh, the species still faces such pressures, partly exacerbated by the damage herds can cause to the crops growing in the fields — the same fields that were once their natural habitat. 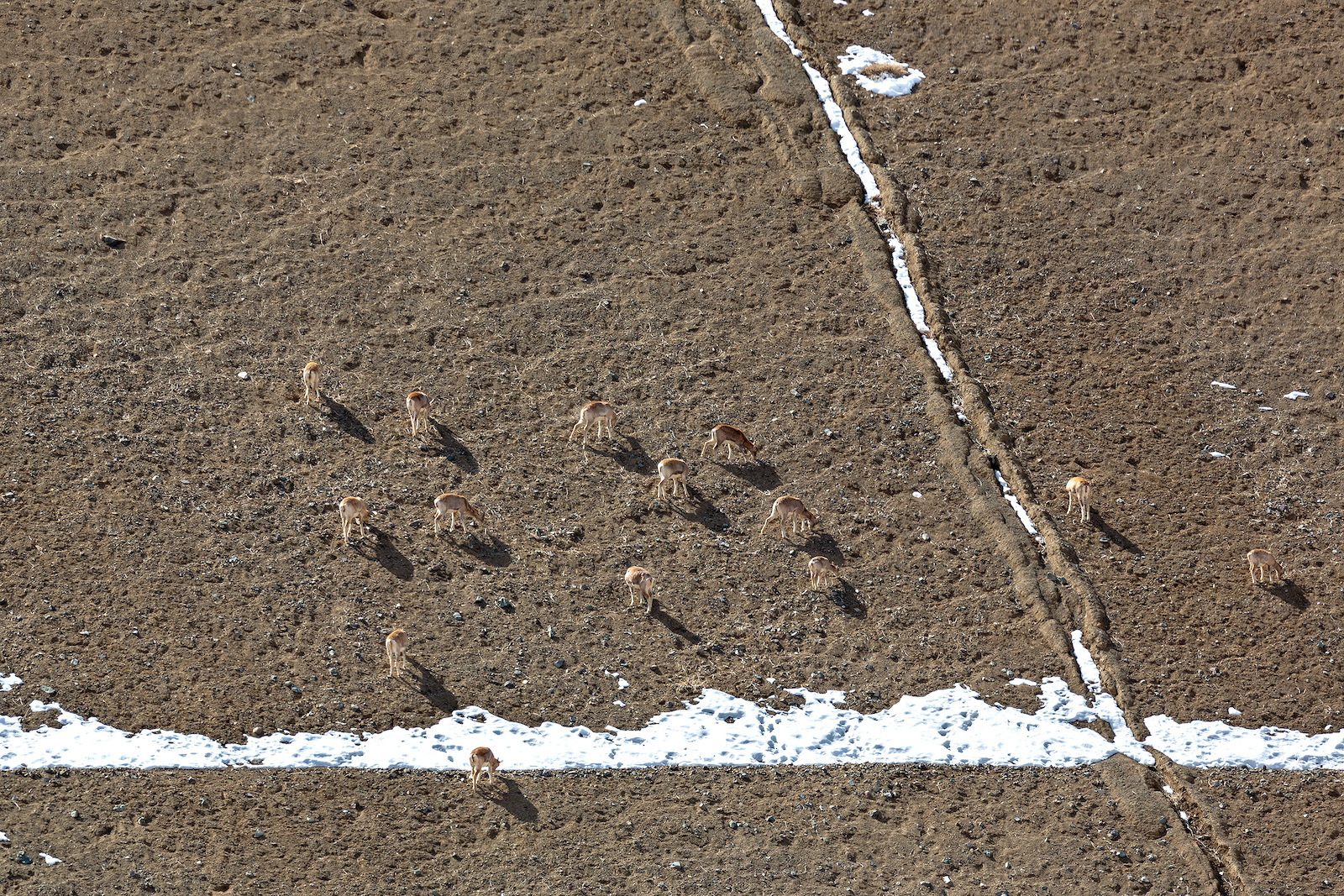 A herd of Ladakh urial grazing on the first sprouts in a crop field during early spring. Photo: Arindam Bhattacharya

Urial are hunted by snow leopards and wolves as well — that’s their role in the ecosystem, and a natural pressure they probably evolved to withstand. Driven out of their prime habitats by humans, they have tried to adapt and have persisted in suboptimal habitats. But they are unlikely to be able to withstand continued persecution in the form of hunting, excessive livestock grazing, and continued conversion of remaining habitats.

If not for its beauty, its existential value, or its role in the ecosystem, Ovis orientalis deserves care and attention from us for its role in supporting the trajectory of human growth, and its influence on the course of ancient and modern civilizations over the last 11,000 years. 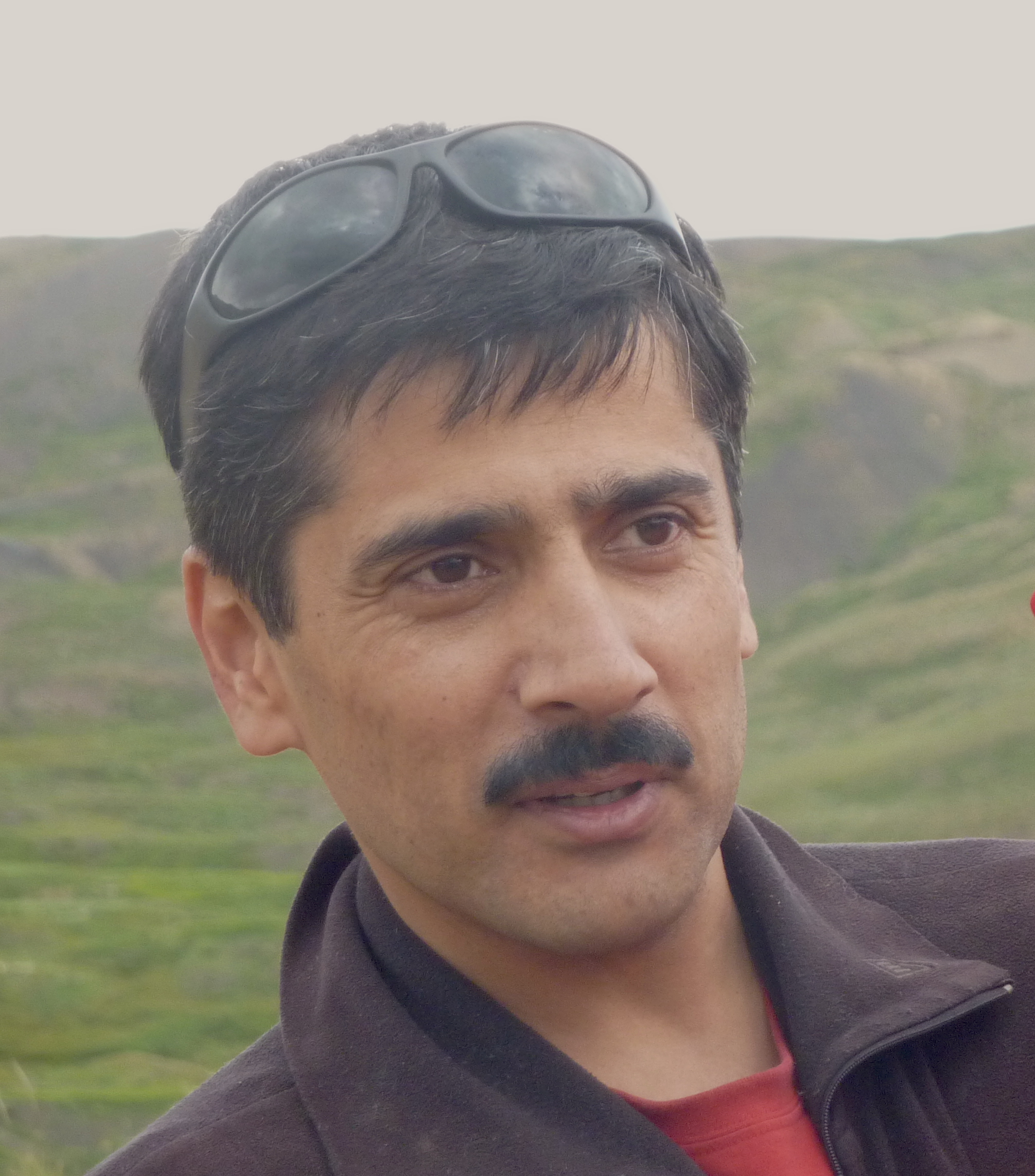