Leaf Masquerade of the Vine Snake

A visibly agitated vine snake went for the nose of a popular television presenter as he handled it for his audience. I was alarmed. Though I was only ten years old at the time, it annoyed me that the channel used that footage to promote the show, vilifying a poor snake that was probably only defending itself.

What I also learnt from watching that footage repeatedly was that this pointy-headed snake is drawn towards human noses. Ever since, I had always been wary while walking under low branches in a forest, lest a vine snake grab my nose. It wasn’t until a recent trip to the dense forests of Agumbe, that I was finally able to get rid of this irrational fear I’d picked up in my childhood decades ago.

In Agumbe I saw more vines snakes in a week, than I could possibly count. While these snakes are found throughout peninsular India, Agumbe, in the central Western Ghats, is an ideal habitat for them and other reptiles. Wherever I went, day or night, I invariably spotted one draped around a bush, or on the low branches of a tree. In this forest it was easy to find a snake languidly swaying with a branch in the breeze, barely giving away its presence. 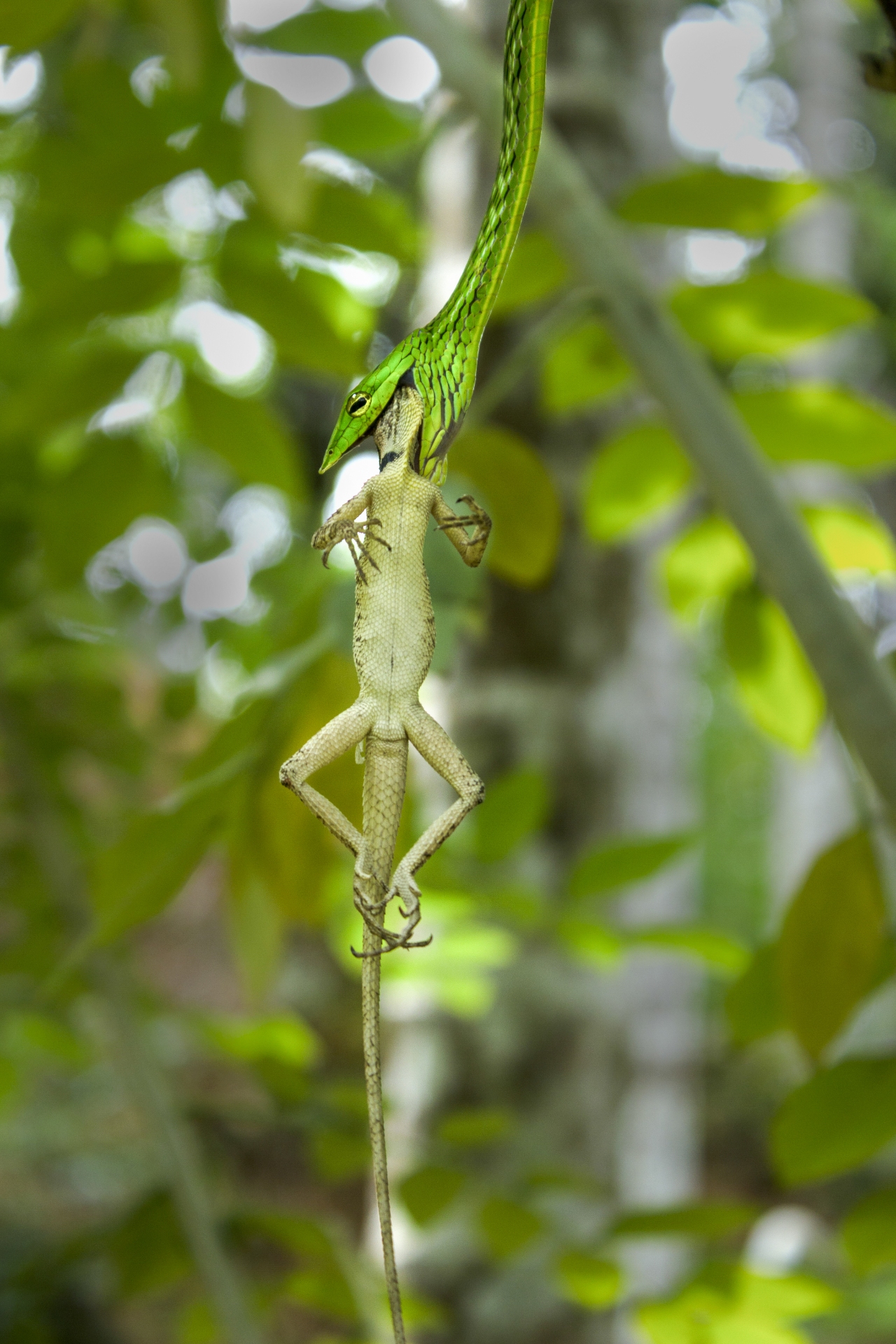 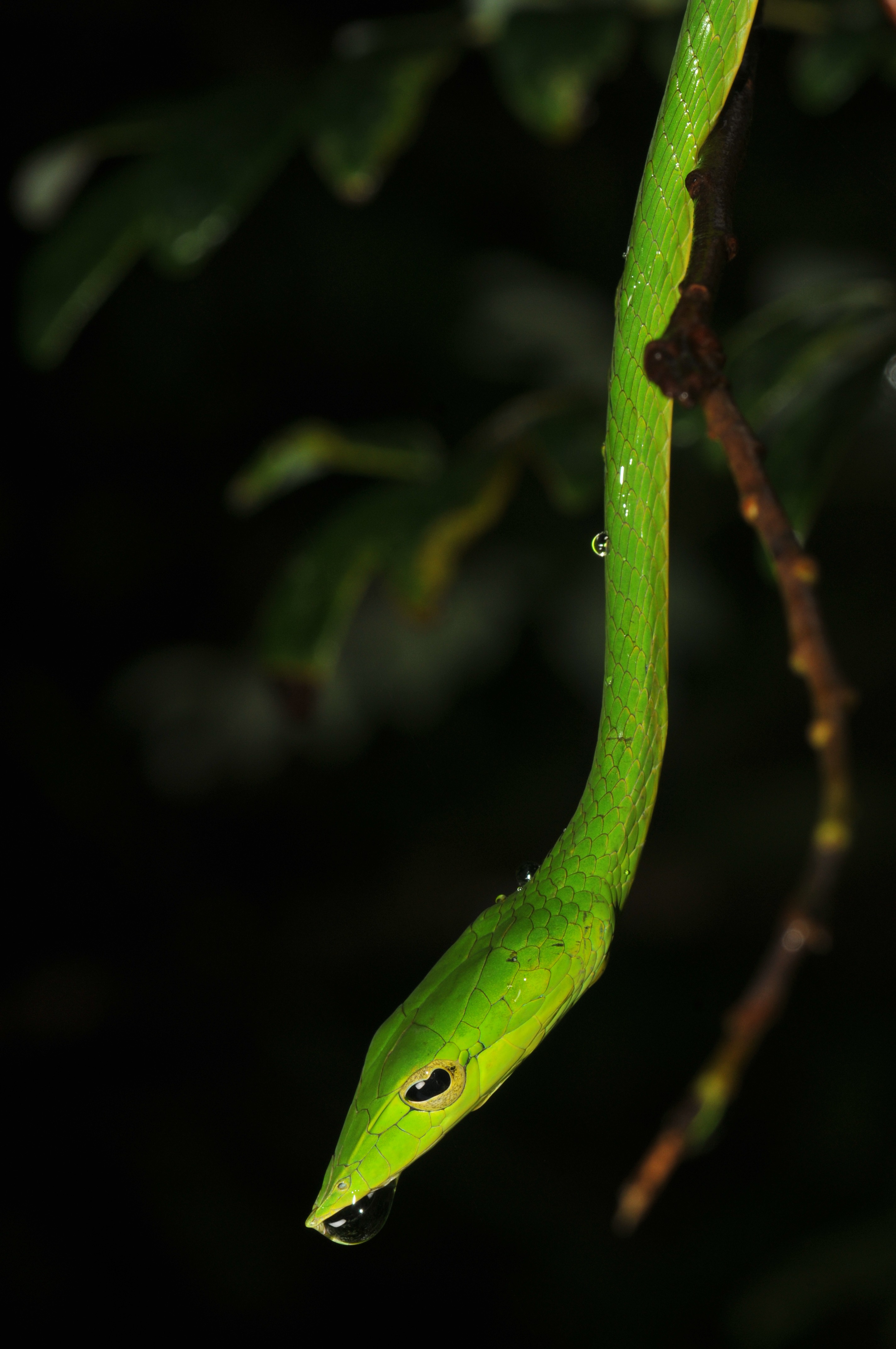 Lizards and frogs are the main prey for vine snakes, but they may also feed on small rodents and birds. Photo (left): Pradeep Hegde The vernacular name for the vine snake in many Indian languages means ‘eye-plucker’, and many mistakenly believe it that it blinds its victims. Photo (right): Gerry Martin Cover Photo: The vine snake’s colour and leaf-shaped head helps it camouflage itself on the bushes and low-hanging branches of trees that it is usually found on. Cover Photo: Saurabh Sawant

The vine snake is also known as the long-nosed whip snake. One look at its head is enough to understand why the name of its genus Ahaetulla means ‘eye-plucker’ in Sinhalese or why the snake is known as the ‘kan-kutti pambu’ (eye-pecking snake) in Tamil. The origin of this nomenclature lies in the myth that the snake goes for the eyes of its attackers, blinding them in the process. And here I was thinking that it is partial to human noses!

The vine snake is found in India, Sri Lanka, Bangladesh, Thailand, Vietnam, Cambodia and Myanmar. It has hypnotic yellow eyes with a horizontal black pupil, unlike its namesake cousin Oxybelis fulgidus found in Central and South America, with round pupils. In India it is found almost throughout the country.

This slow-moving snake can grow up to 1.5 metres in length and can easily pass for a vine on a tree, thanks to the excellent camouflage provided by its colour and flat leaf-shaped head. When the snake feels threatened, it will open its mouth wide, expand its neck, and reveals black-and-white scale markings. Photos of individuals exhibiting such threatening display are frequently found on photography forums, an indication that some perhaps photographers who want to capture this posture may be harassing them in order to get their images. 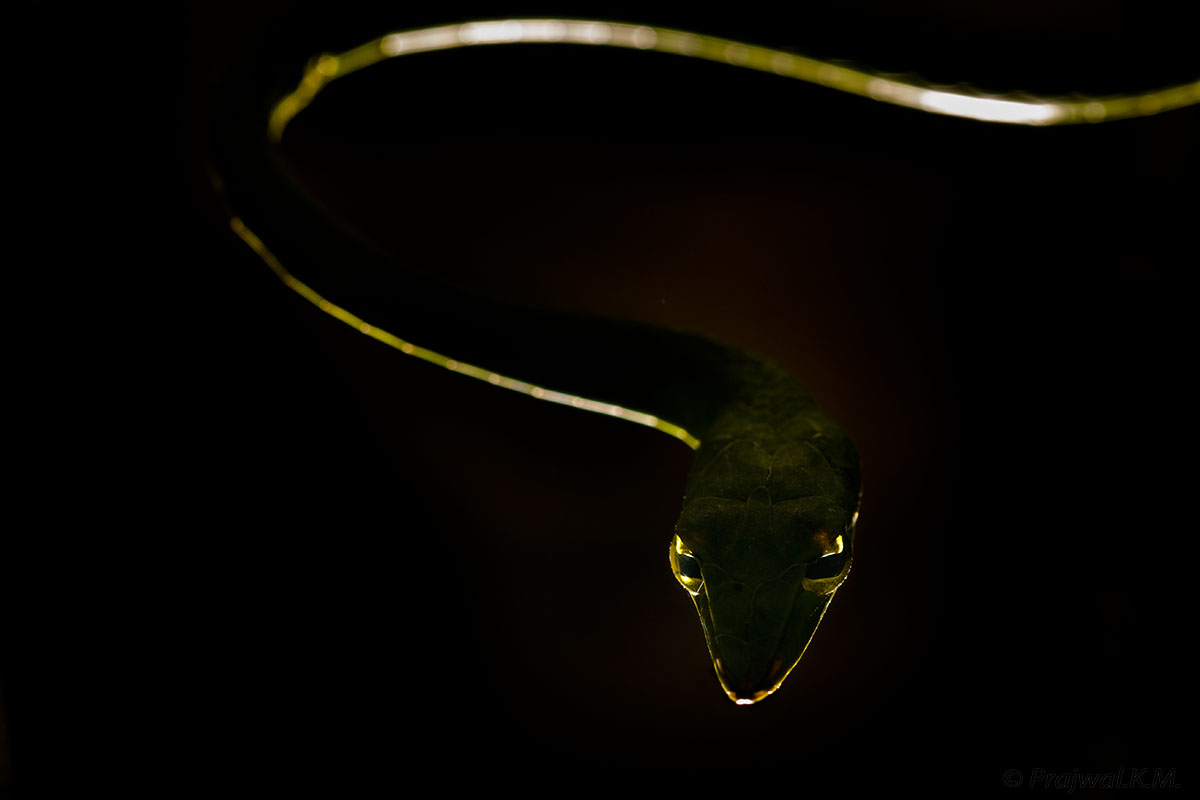 The vine snake is an ambush predator, active during the day, and usually found resting on a branch at night. Photo: Prajwal KM

Vine snakes are arboreal and use binocular vision and a keen sense of smell to locate prey such as frogs and lizards. Slithering through branches during the day, they wait for the right opportunity to strike. Once an animal is caught, the snake releases venom from fangs located at the back of its jaws, immobilising its quarry entirely, before proceeding to swallow it whole. The snake’s bite is mildly venomous to humans as well, meaning it can cause harm, but the attack is rarely fatal.

Vine snakes give birth to live young, which are capable of hunting from the moment they are born. Little is known about the threats facing these reptiles, but the destruction of their habitat doesn’t bode well for the survival of or for other species of reptiles.

The vine snake’s forward-facing eyes enable it to perceive depth of field well as it navigates through trees in search of prey. Photo: Saurabh Sawant

As I observed a beautiful, long specimen casually flicking its tongue to taste the monsoon air, I realised how far from the truth my childhood perceptions of this snake’s nature had been. It made me ponder over how numerous other species of snakes and reptiles are portrayed on TV shows by adrenaline junkies. Looking back I realise that all that the slender reptile from my childhood had wanted was to be left alone by the TV production crew assembled around it. 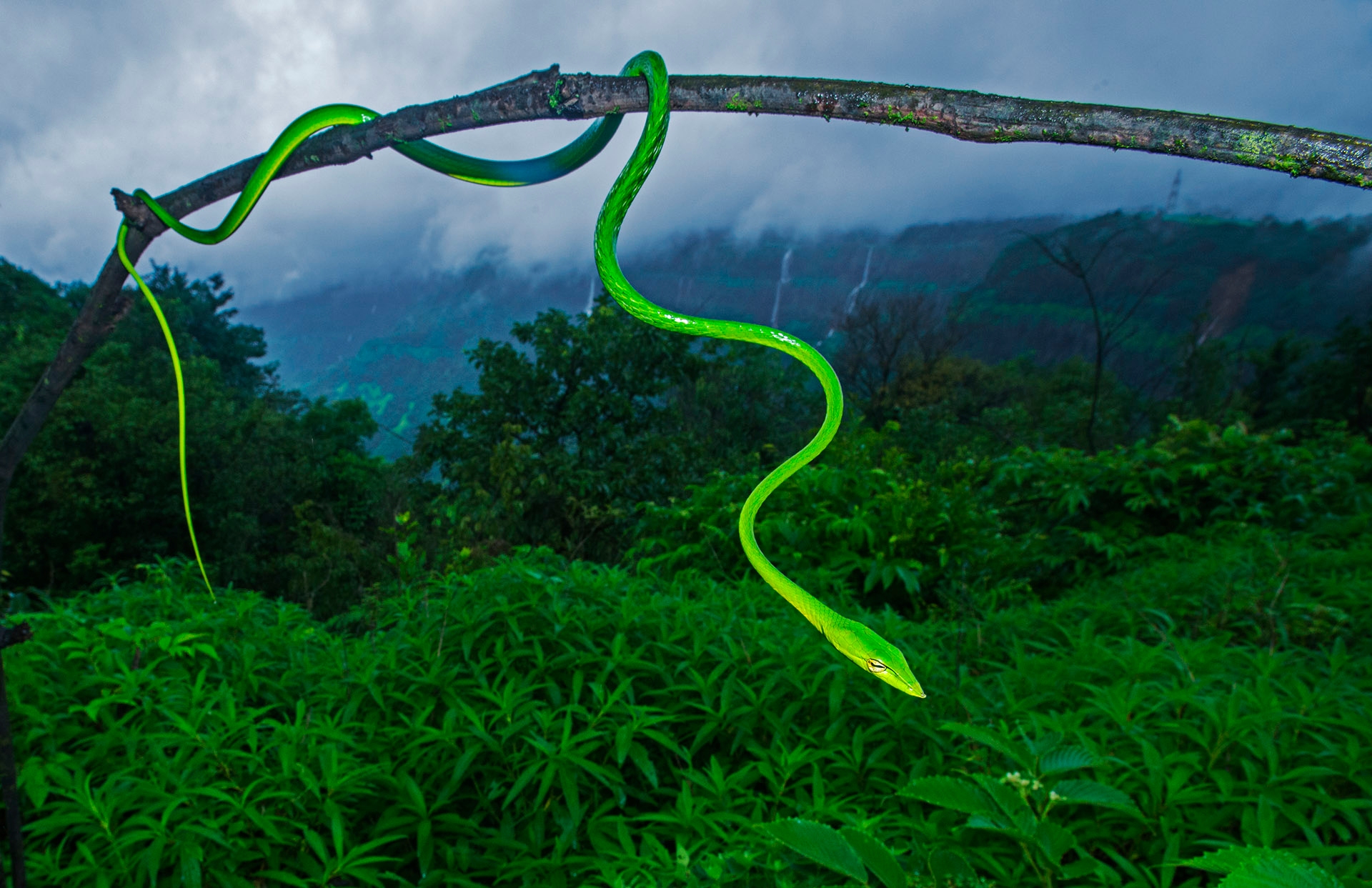 The rainforests of Agumbe in the central Western Ghats form the ideal habitat for the vine snake and other reptiles. Photo: Dhritiman Mukherjee