A single queen ant gives rise to a new colony of ants whose workers weave leaves to make nests spanning multiple trees, to house hundreds of thousands of colony-mates

Text and photographs by Samuel John 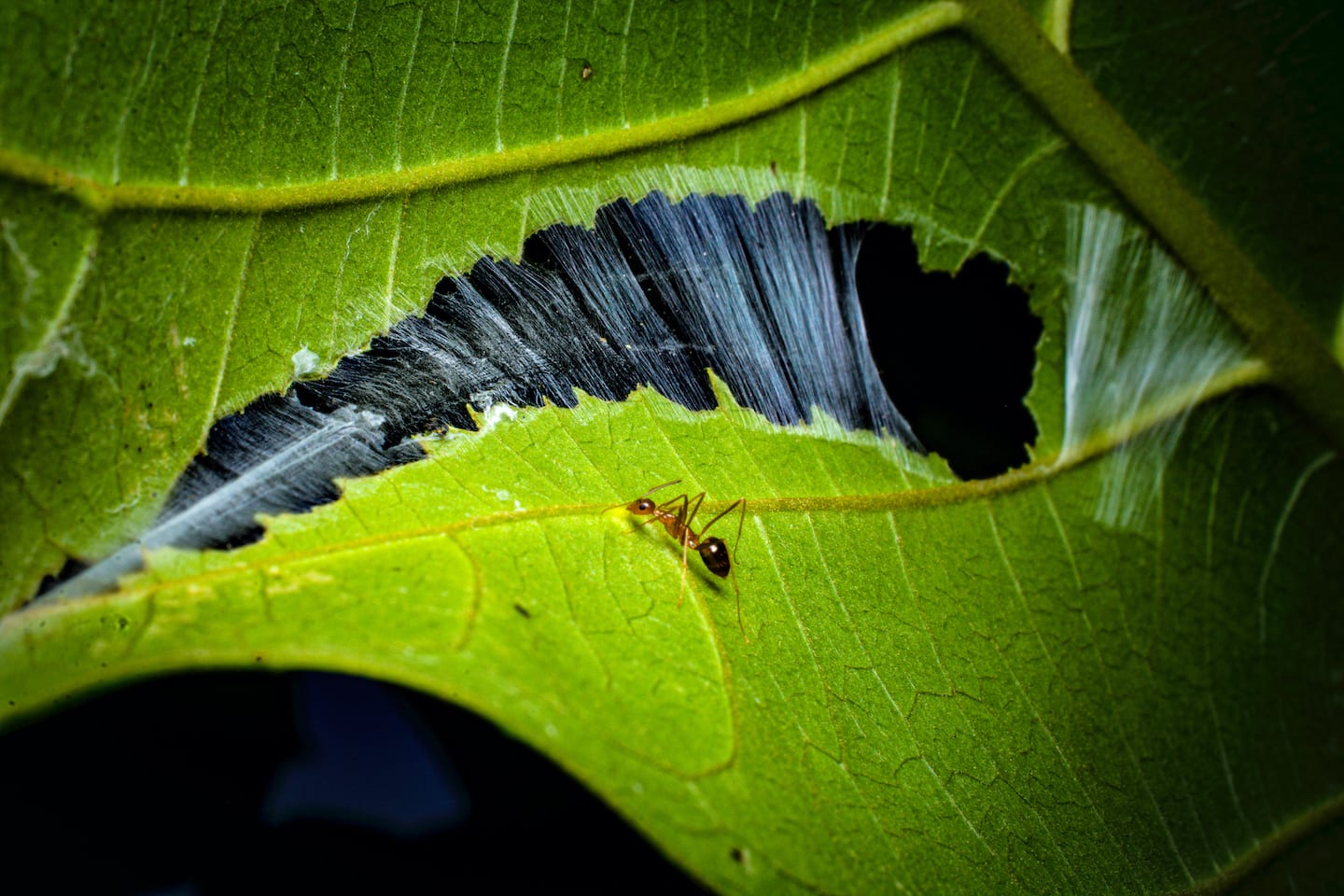 Ants are one of the most dominant forms of life on planet Earth. While each individual ant, at scale, is strong enough to give most Olympic weightlifters a crippling complex, their true strength comes from sheer numbers coupled with a seemingly unconditional sense of loyalty to their colony. At a macro scale, ants account for nearly 25 per cent of the total biomass of the tropics. For perspective, imagine every animal in the tropical belt was crammed into a glass jar. A quarter of this jar would be ants while the rest of the jar would contain everything from elephants to humans to every other insect. At a micro level, their numbers are still pretty impressive. A single colony of ants can contain as many as 500,000 individuals.

Ants come in a wide variety of sizes and shapes. Sizes and shapes that have allowed them to conquer different microhabitats. The large and strikingly gorgeous looking Harpegnathos saltator lives in nests built on the ground and seems to have developed an appetite for flying insects. To tackle the minor hurdle of having a meal simply fly away, they have evolved the ability to jump astoundingly well (imagine Michael Jordan hunting birds with a hedge trimmer attached to his head). Some genera of ants like the Solenopsis have learned to utilise concrete crevices to build nests. With competition steadily growing on the ground, some ants took to the trees. Among their many fascinating adaptations, one of the most incredible is the story of an ant that builds its home on trees.

The Latin word “oeco” is derived from the Greek word “oikos” meaning home and “phyla” means leaf. Oecophylla are a genus of arboreal ants that weave together leaves to make their homes in the trees. Between tropical Asia and Australia, the canopies are dominated by Oecophylla smaragdina, a species of weaver ant that lives everywhere from the canopies of evergreen forests all the way to littoral trees that sit on seashores.

A group of ants (top) mobilises to quickly bring down a spider many times an ant’s size. This spider was later taken into their nest. An Indian jumping ant (Harpegnathos saltator) carrying a freshly killed moth in its long mandibles (below). A weaver ant (cover photo) visits a construction site. This leaf and others on this tree became nests within a few days after this photo was taken.

Weaving is a family affair
All of nature is a stage, and its talent manager, evolution has through many millennia nurtured artists with a keen sense of functionality. The birds of paradise and peacock spiders, among others, dance to attract mates — spiders in the genus Cyclosa create defensive art installations and some artists have chosen to weave. Weaver ants, as their name so rightly suggests, craft their homes in the canopies by weaving leaves together. Unlike a male baya weaver constructing a nest to attract a mate, or a spider weaving its web to hunt, weaver ants cannot weave individually. It is a collective action of various members of the colony coming together (in true ant fashion) to build their home.

The process begins with scouts heading out to find a leaf (or leaves) that feels just the right amount of fresh and flexible. On finding such a leaf, the scout uses a variety of chemical signals to summon its colleagues. Hundreds of ants soon arrive and the laborious task of construction goes into action. They promptly get the walls of their new castle ready by either cutting a large single leaf into smaller foldable parts or bringing together multiple leaves. While smaller nests can be constructed with a single leaf, large nests can be made up of nearly 300 leaves.

The ants begin to form multiple chains of 9-12 individuals each, and bridge the gaps between two leaves (or two pieces of a single leaf). In an astonishing show of coordinated strength, they fold these leaves together and hold them in place. From the colony, a few workers now appear with larvae in their mandibles (mouthparts) to start weaving. While the ants themselves don’t produce silk, young larvae produce silk as a part of their natural cocoon-inclined instincts. The worker gets the larvae in position and touches it to trigger the release of silk. This silk is then placed on one side and the worker moves back and forth weaving the two leafy walls together. The team follows a similar process and builds across dozens of trees to house hundreds of thousands of colony-mates, creates nurseries for their young, store food and even manage their waste.

Workers from a weaver ant nest come out to inspect a large human intruder climbing their tree with a phone camera. Weaver ants routinely abandon old nests and move into new ones with fresh leaves.

Kingdoms in the Canopy

For a person who spent most of his life in Bengaluru city, and now lives in the Andaman Islands, what I wake up to each morning has changed drastically through the years. There is, however, a profound sense of familiarity in the large reddish-yellow ants that marched on the mango tree outside my home in Bengaluru and now dominate the view on most young trees I see on Havelock Island. The trees that they grace with their domineering presence are dotted with a number of nests. Just like a sky that reveals more stars as your eyes adjust, stare at a tree with weaver ants and more nests slowly begin to appear. With multiple nests across an expanse of trees, a single colony can spread as far as 1,500 square metres, housing up to 500,000 individuals.

In the trees they call home, these ants dominate the network of branches. When they venture to the ground in search of food, they are an equally commendable force. Each group of workers appears to unanimously agree on their purpose, and consequently bring harmony to hard work. This allows them to carry food and other resources many times their size up to their home in the trees; without having to engage in the “my left, not yours” kind of conversations that we tend to struggle with while moving furniture.

Their dominance of the canopies has been documented as early as the third century A.D. In China, weaver ants were used as natural pest control agents in citrus orchards. They would feed on insects that attacked the tree, and in exchange, they received sugary treats from the hempiterans that shared the tree with them (Hemiptera are sap-sucking insects that release carbohydrate rich dew drops). Early agriculturists would connect different trees in their orchard with bamboo to allow weaver ants to spread and start new colonies.

A group of weaver ants works together to carry a piece of animal bone up a vertical surface nearly 20 feet up to their nest.

The Birth of New Empires

The start of a new ant colony is nothing short of epic. It follows the indomitable spirit of a single mother as she rises to become the queen and mother of a colony of nearly half-a-million ants. When a colony reaches maturity, it produces a group of fertile winged ants called “alates”. These fertile males and females leave the colony and take a “nuptial flight” in search of a mate. The females release a pheromone to attract males and the males bicker amongst themselves as part of their contribution to the mating process. In the case of weaver ants, a mature colony produces a large number of unmated fertile females called “callows”. These callows sneak out at night with a set of workers to quietly set up small nests of their own.

After mating, the male dies and the female is left with the monumental task of starting a new empire. A mated female is large, bulky, and susceptible not just to predators, but the defensive wrath of other Oecophylla colonies, including her own home colony. Each ant colony has a distinct hydrocarbon signature that allows the members of the colony to distinguish a nest mate from an intruder. When a female has mated, her hydrocarbon signature changes to a new unique signature all her own. This pushes the new queen-to-be to find a place of refuge from the elements and other threats.

Once she finds such a spot, she sheds her wings and feeds on them for nutrition, to lay her first clutch of about 6-7 eggs. She nourishes them until they are fully grown workers who are ready to take care of their queen. Over time, she lays more clutches until the colony has grown to hundreds of thousands of workers. She is able to determine the sex of each of her offspring and regulates their birth-rate in the interest of a flourishing colony. She also dictates the hydrocarbon signature of the entire colony giving them a unified chemical identity.

The inside of a nest containing callows and males that have just mated (top). This nest was ripped off the tree by a pair of Andaman drongos. A newly mated queen (below) is seen as a threat by workers of a colony who promptly get to work at killing the potential threat.

The new colony now scouts, forages, explores and weaves until they reach maturity and produce future queens of their own. Through this entire process, weaver ants weave themselves into the lives of the animals, plants, and natural elements that they come in contact with. Each of these interactions make for some of the most incredible stories of cooperation, coexistence, war, and the many other experiences on life on this planet. The next two parts in this three part series will look at these fascinating interactions of weaver ants in greater detail.