Numerous species of spiders trick weaver ants by mimicking their appearance and behaviour. They steal their identity and larvae, and sometimes even kill and eat them up 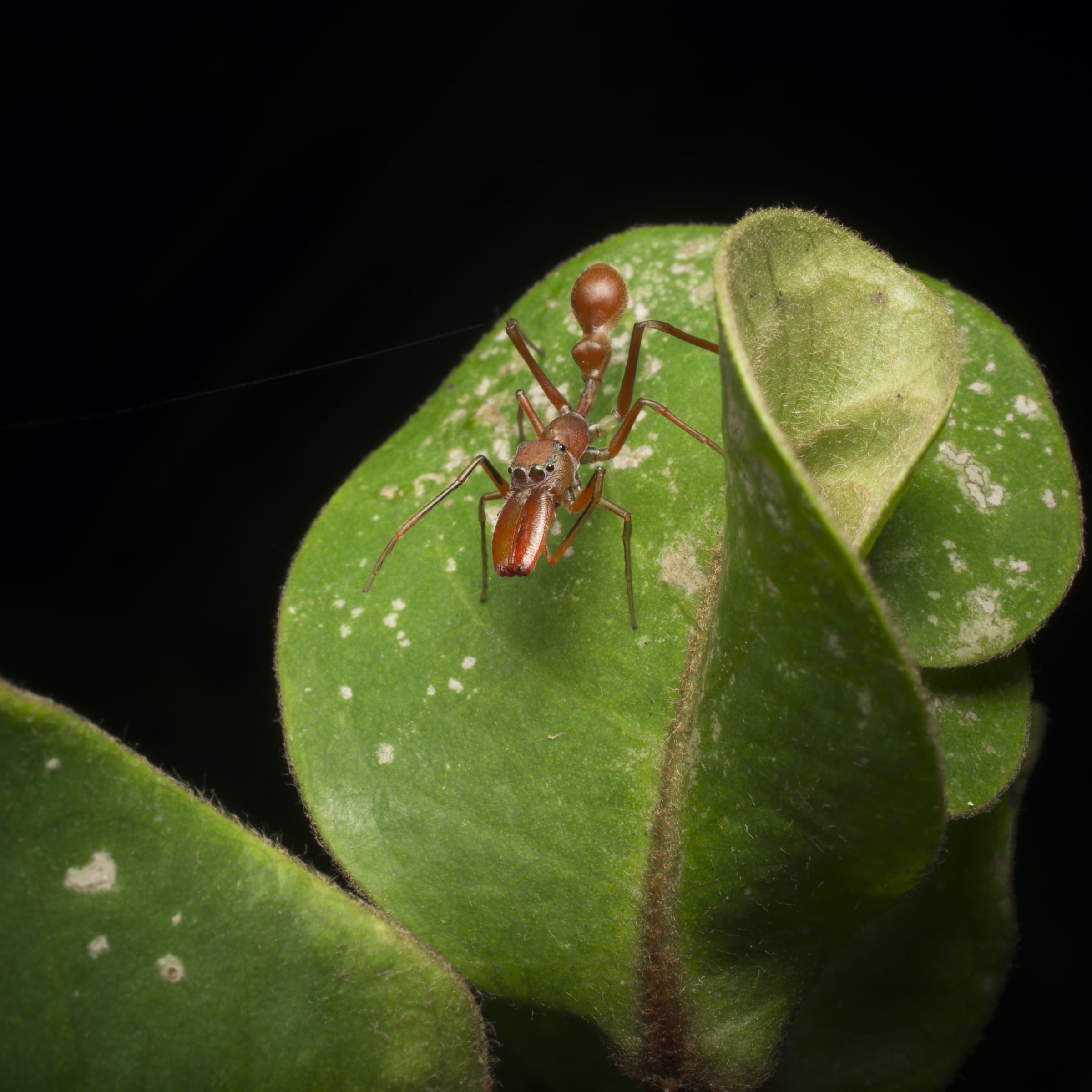 Imitation is the sincerest form of flattery. Several genera of spiders have seemingly figured out that ants are quite susceptible to this form flattery. Spiders have been on Earth for about 380 million years and at some point in their evolution, over 300 spider species concluded that it would be a good idea to pretend to be ants. From looking like ants to copying their chemical signatures, their impersonation takes on spectacular forms. Why would a spider spend all that evolutionary time perfecting the art of impersonating an ant? Like all good flattery, there is an ulterior motive to each form of imitation — ranging from evading potential predators to tricking the “host” ants themselves.

Another form of life that has been around on Earth for around 30 million years is the weaver ant (Oecophylla smaragdina). In this time, they have come to build vast empires and dominate tree canopies of the tropics. Their success did not go unnoticed. Several species of ant-mimicking spiders have made weaver ants the target of their ecological chicanery. These spiders have managed to convince a select audience that they are weaver ants. 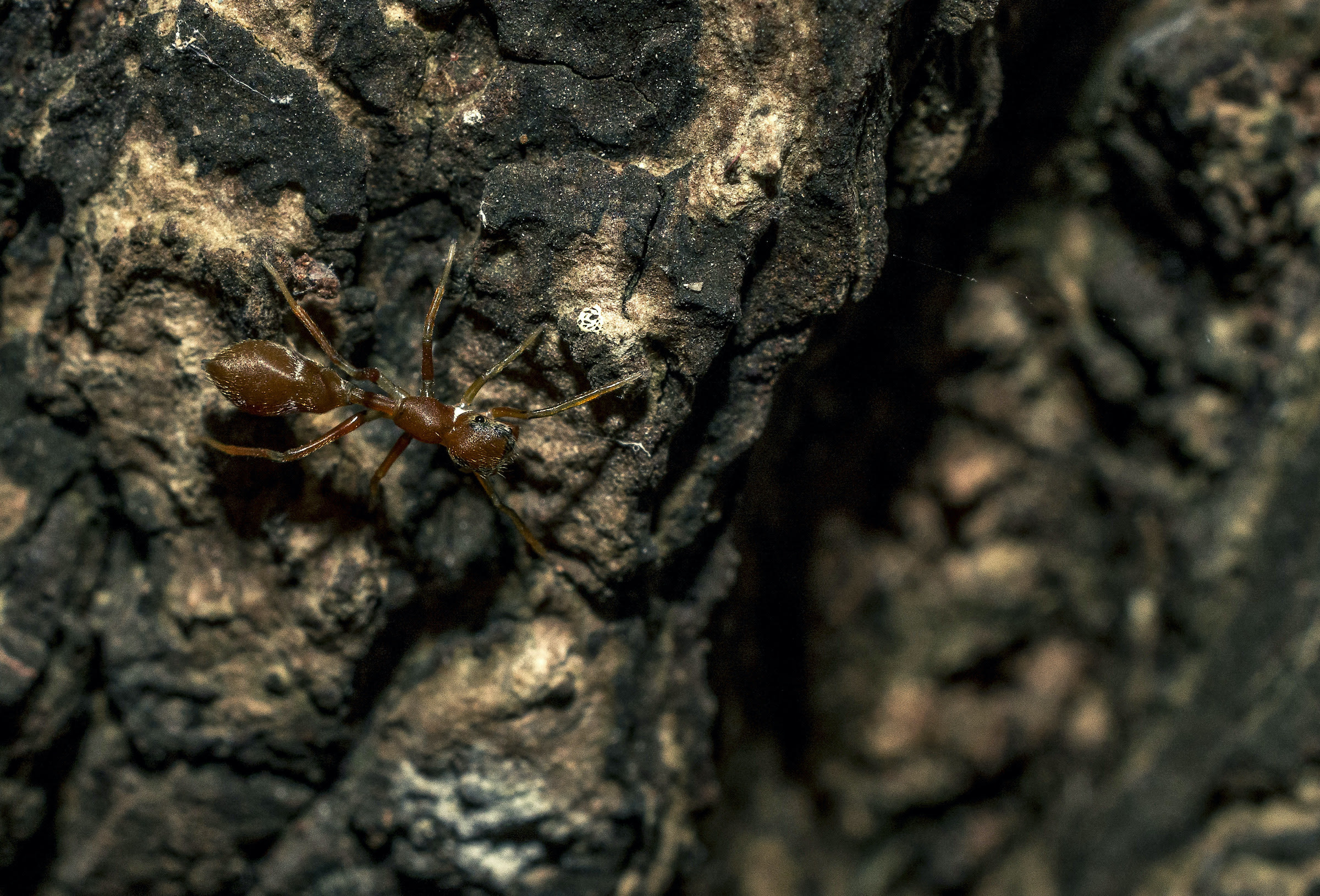 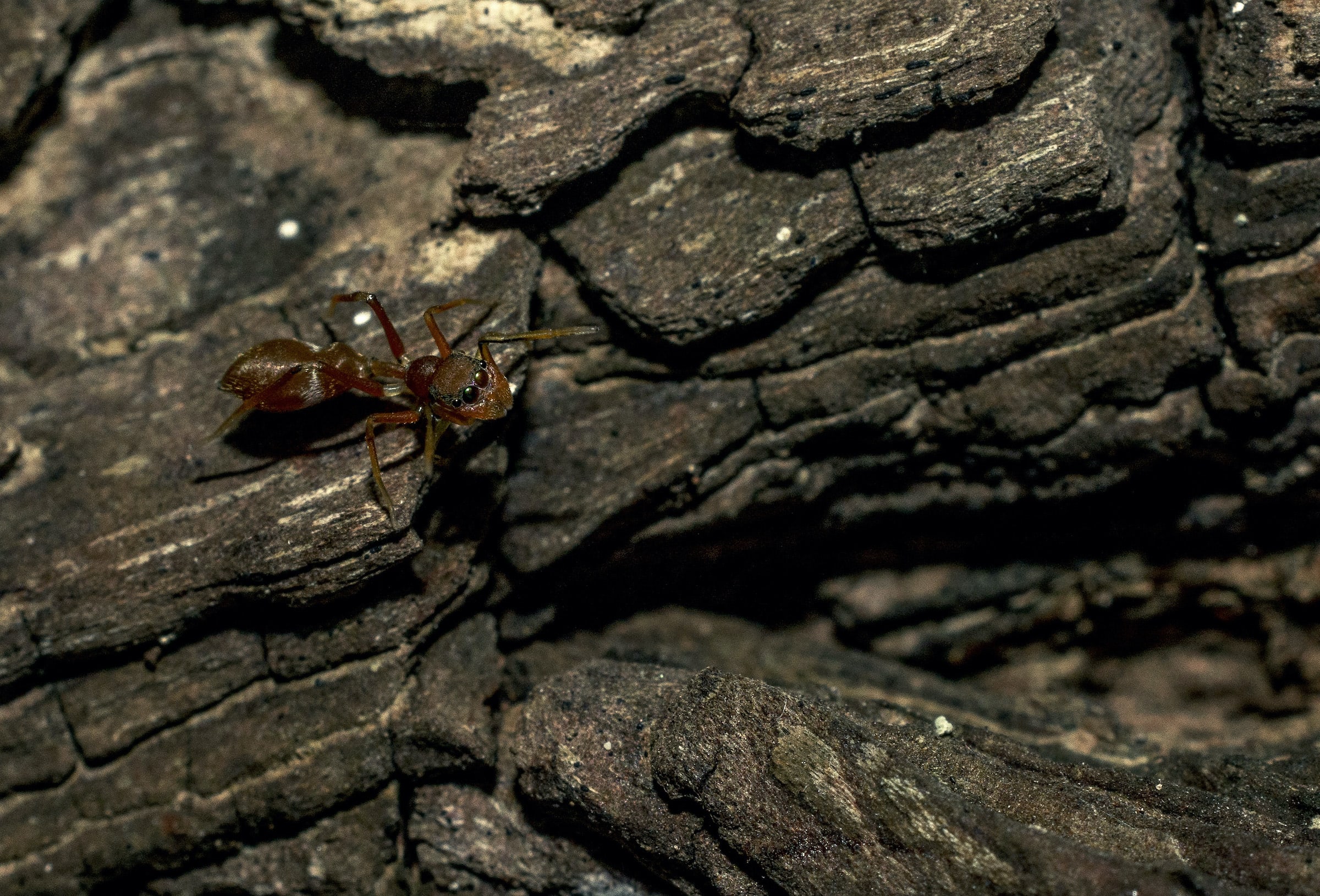 (Top) A female weaver ant-mimicking spider with its head down looks like a near-replica of the ant. (Above) The same spider looks up, revealing the signature eyes of a jumping spider. Photos: Samuel John Cover photo: Male Myrmarachne plataleoides spiders that are weaver ant mimics have adapted their chelicerae (mouthparts) to resemble a major worker carrying a minor worker in its mandibles. Cover photo: Samuel John

Don’t believe your eyes
First on the list of weaver ant mimics is Myrmarachne plataleoides, a species of jumping spider. Seeing one for the first time is a bit like solving a word puzzle. After staring at it for a while, a moment of clarity suddenly emerges. Initially these spiders are visually indistinguishable from weaver ants in almost every way. Look at them a little closer, and you will notice eight legs instead of six, eight eyes instead of two, and most often, a strand of silk near the abdomen.

M. plataleoides quietly lurk around weaver ant nests for most of their lives for one important reason — protection. A single weaver ant colony can grow as vast as half-a-million ants working together for queen and colony. A select list of symbionts (organisms living in symbiosis, like homopterans) and weaver ant mimics enjoy the polite side of these social creatures and their mammoth empires. On the other hand, predators, intruders and weavers from other colonies are left out of the Sunday brunch invitation list and subjected to the territorial side of the weaver ant. In their aggressive territoriality, the uninvited are met with vicious bites and sprays of formic acid. Additionally, weaver ants are considered unpalatable by many predators. M. plataleoides wilfully exploit the weaver ant’s effect on its own predators. 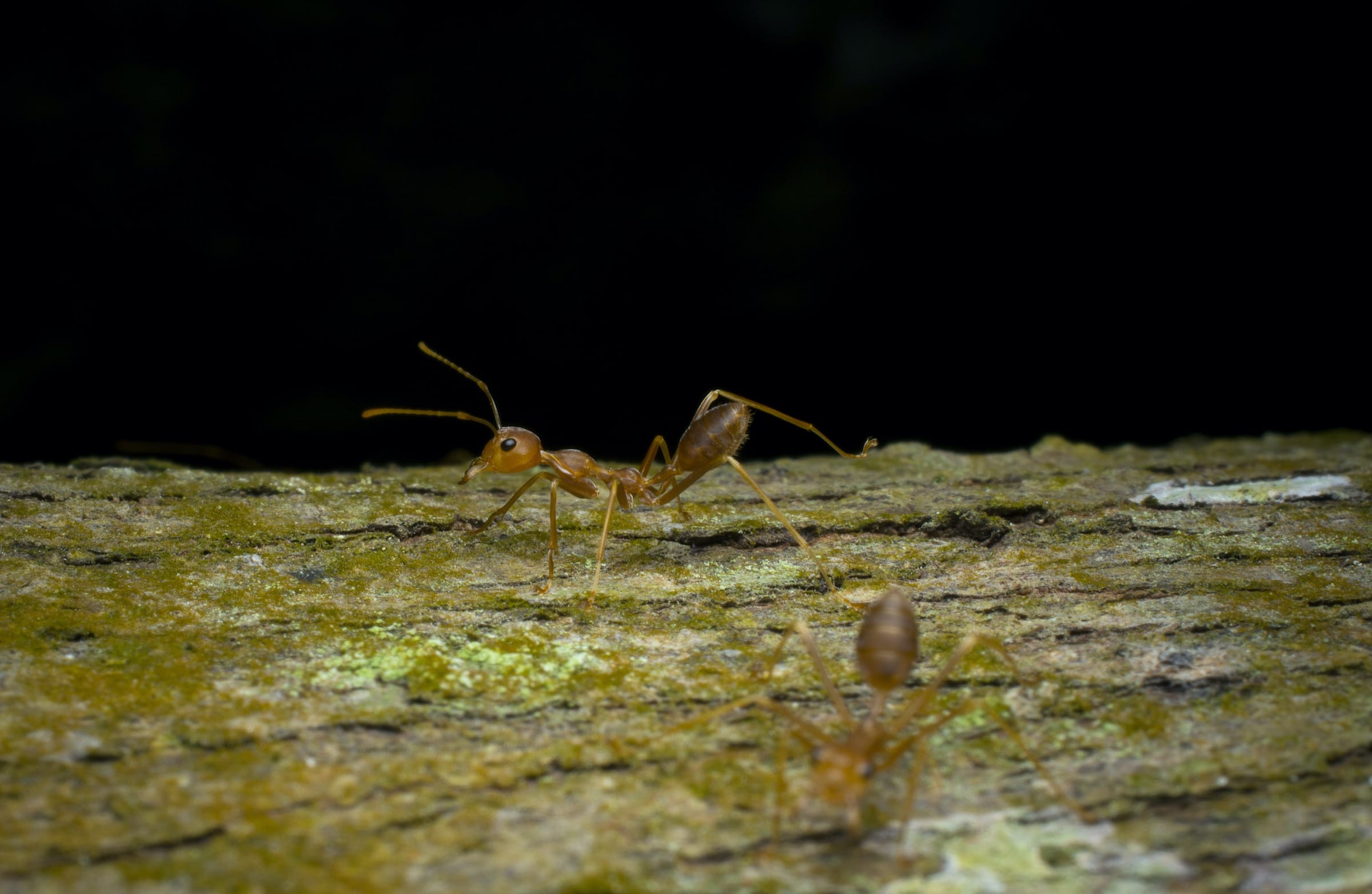 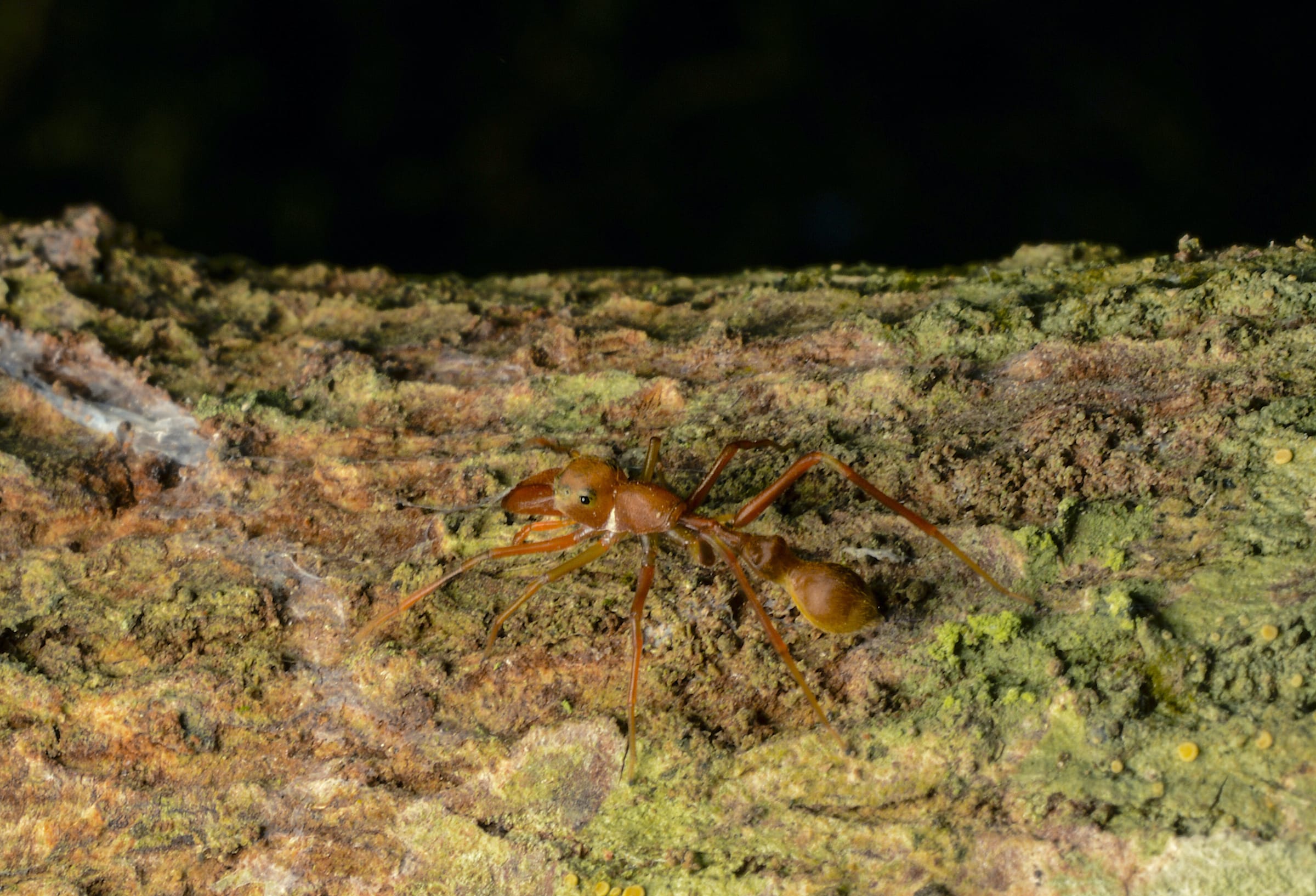 (Top) A weaver ant walks along the bark of a tree towards its nest. (Above) Moments later, a mimic is seen on the other side of the same tree. Photos: Samuel John

Spiders that have evolved to look like ants are part of the “Myrmecomorph” collective. Many spiders in this category, including M. plataleoides, have not stopped at copying the appearance of an ant, but actively mimic their behaviour as well. Unlike the calculated movement of other jumping spiders, most mimics move frantically to appear more like industrious ants. These mimics also raise their front pair of legs and wave them in the air to further the illusion in a couple of ways. First, the raised legs and their waving motion resemble an ant’s antennae. Second, raising two legs means the spider now appears to standing on only six legs — the correct number of legs on a healthy ant.

All the better to eat you with
The easiest way to visualise the predatory behaviour of crab spiders in the genus Amyciaea is to think of the wolf from Little Red Riding Hood. The spider uses its abdomen, which bears a striking resemblance to the head of a weaver ant, to get the attention of a nearby weaver ant. Weaver ants communicate through chemical signals and antennation (touching with the antenna) that requires getting close to another ant. When the unsuspecting ant wanders close enough to the mimic, the spider pounces on it and injects the ant with venom. 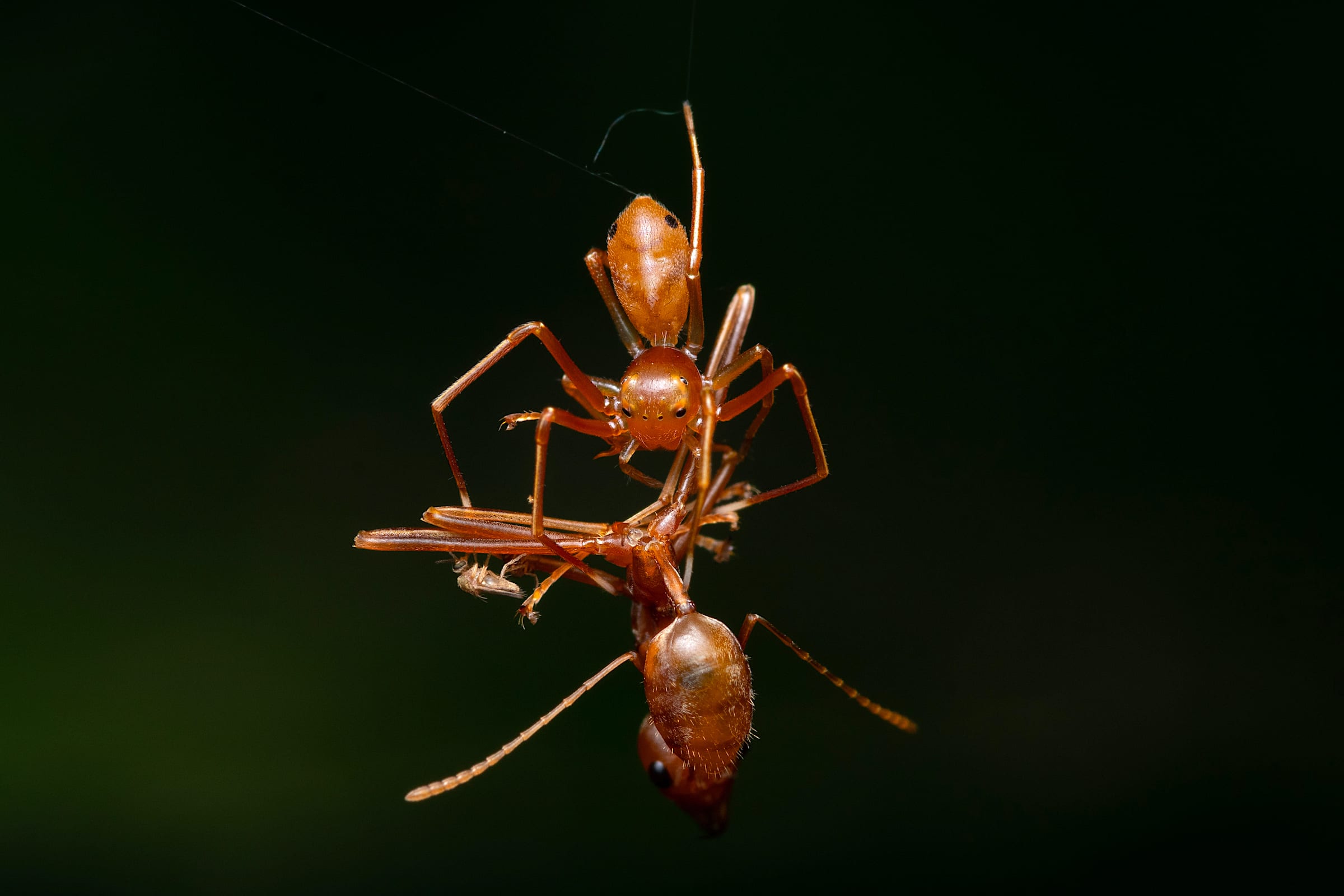 An ant-mimicking Amyciaea sp. is seen gripping an envenomated weaver ant while suspended from a line of silk. Photo: Jithesh Pai

How does a tiny crab spider (smaller than the head of AAA battery) hunt one of the most dominant animals in the forest canopy? A single weaver ant that is both stronger and has the support of thousands of colony mates. Amyciaea has a single elegant solution to overcome these issues. As soon as it has injected its victim with venom, Amyciaea unlocks its inner spider and drops down on a single line of silk with the ant safely grasped between its front legs and mouthparts. This position makes it virtually impossible for the ant to manoeuvre itself with no ground beneath it. The ant is also unable to signal its colony mates while grappled mid-air. The venom slowly courses through the ant and it dies. Amyciaea carries the weaver ant away to a more comfortable spot, like a leaf, injects it with a digestive fluid and then enjoys the spider equivalent of a smoothie.

The Amyciaea spider takes an envenomated ant onto a nearby leaf and consumes it. Photo: Jithesh Pai

The identity thief
Weaver ants are generally experts at identifying other weaver ants in their colony. Cosmophasis bitaeniata, a species of jumping spider, belittles the weaver ant’s expertise by convincing them that they are members of the colony. These spiders can therefore move in and out of weaver ant nests freely, lay their own eggs inside ant nests, and regularly feed on ant larvae. The thievery of larvae is both a great source of nutrition for the spider and the secret behind its trickery of weaver ants.

A Cosmophasis sp. spider, a second after it has stolen a homopteran insect from a weaver ant “honeydew farm”.Photo: Samuel John

In the world of ants, weaver ants are known to have one of the most advanced chemical communication systems. Chemical signatures like pheromones are foundational in how they identify one another. Each ant colony has a distinct pheromone made up of cuticular hydrocarbons given to each colony member by the queen. This pheromone acts as a colony-level passport for the ants. It allows weaver ants to distinguish between a colony mate and weaver ants from other colonies. When a C. bitaeniata spider consumes ant larva, it effectively steals the identity of a colony member. To a human observer, these brightly-coloured spiders do not resemble weaver ants in the least, but an ant only seems to perceive its chemical identity. Once they acquire a colony-specific pheromone, they have near unrestricted access to the colony’s nests. 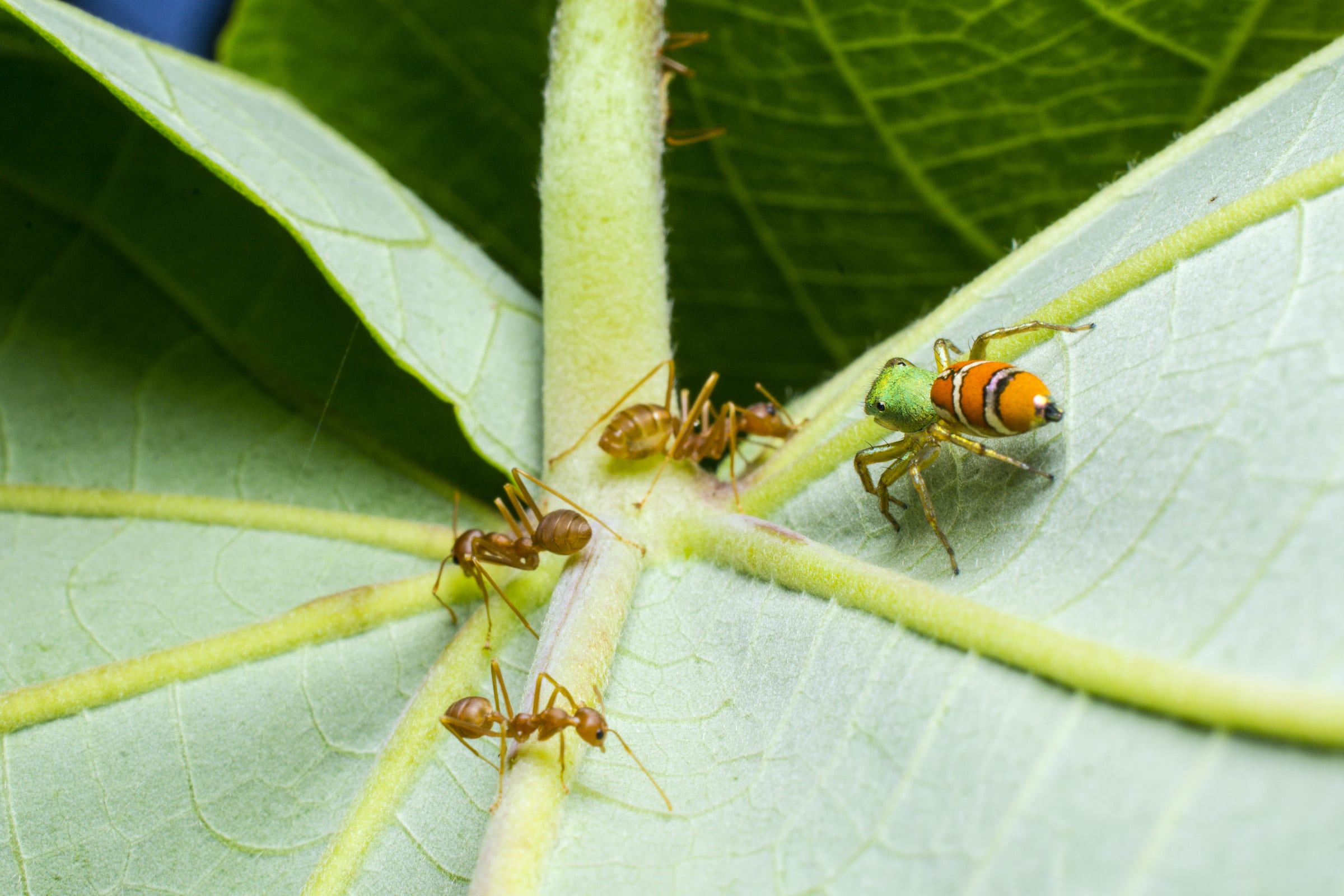 These spiders have been found living inside weaver ant nests, eventually weaving their own egg-sacs in or on the ant’s nest. So convincing is their mimicry, that in addition to preying on unattended ant larvae, they routinely snatch it from the mandibles of minor workers with no repercussions. Major workers on the other hand are able detect the imposters. On detection, the spider will receive the same treatment as any other intruder. This is still less of a concern to the chemical charlatan as they mostly hang around nests that act as nurseries for larvae which are exclusively in the care of minor workers.

The ant held on, displaying unflinching resolve, unwavering discipline, and a sense of purpose beyond the individual self. Just like their mimics, there are many lessons our species could learn from weaver ants.

Industrious as an ant
Learning and writing about weaver ants, those that share spaces with them, and the spiders that mimic them, has been a fascinating journey for me. At some point in my efforts to become a fly on the wall in the middle of an ant nest construction site, there was a distinct moment that brought tears to my eyes. I watched a single ant, forming a bridge between two leaves, waiting for the rest of its colony mates to come join the effort. For over 30 minutes, strong winds swayed the seaside plant, pushing the leaves in different directions. The ant held on, displaying unflinching resolve, unwavering discipline, and a sense of purpose beyond the individual self. Just like their mimics, there are many lessons our species could learn from weaver ants.