Little is known about this elusive bird, including why it occasionally puffs its white breast feathers and sways gracefully from side to side, as if to an imagined melody 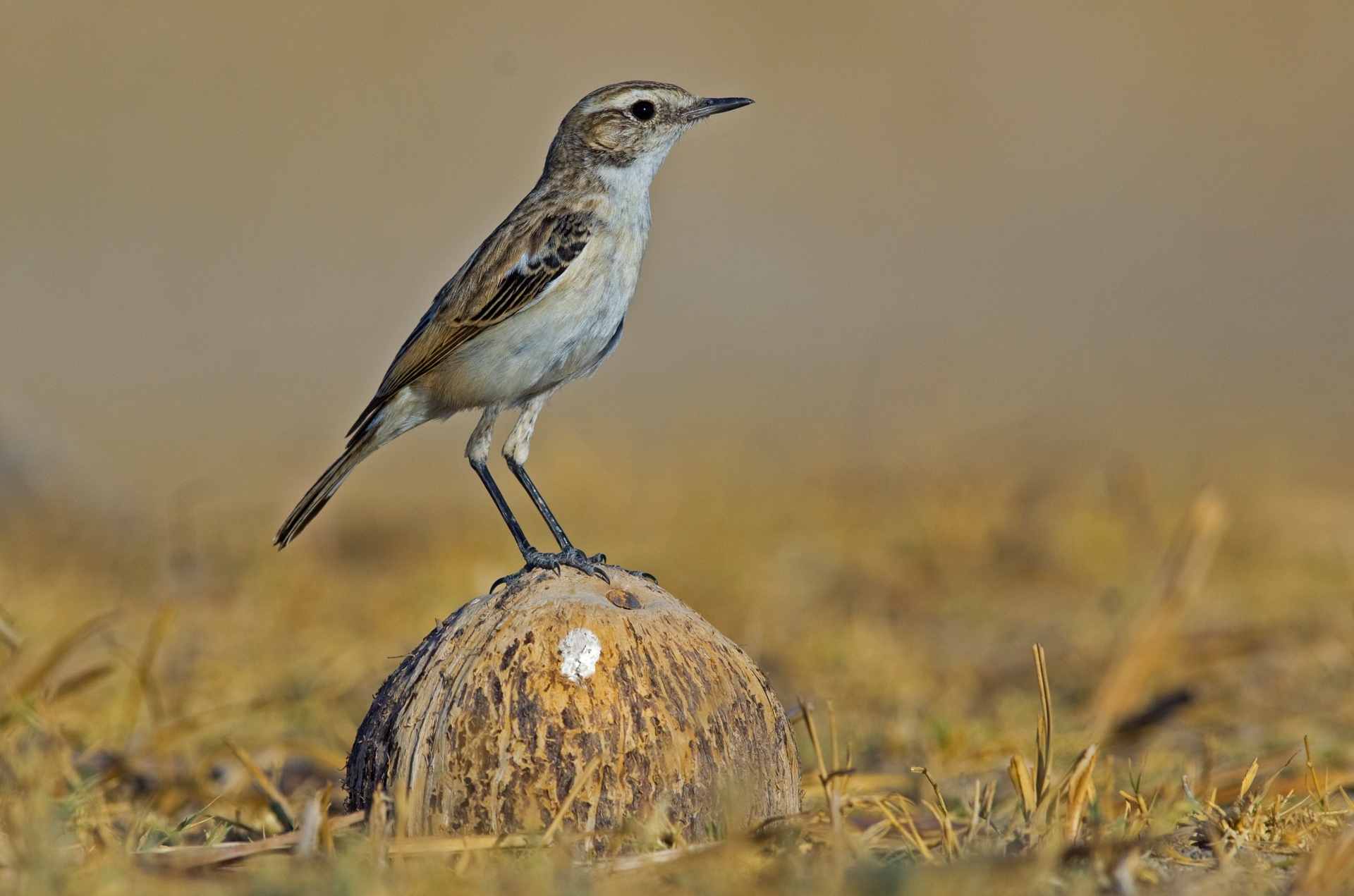 Rich and colourful, the Thar Desert is known for its traditional music and customary dances glorified in documentaries and Bollywood movies. However, what fascinates me more is the comical belly dance of a non-descriptive bird called white-browed bushchat, earlier known as Stoliczka’s whinchat. It was named after its discoverer Ferdinand Stoliczka, who was an ornithologist, geologist and explorer.

It was first described by Stoliczka in 1872 from a specimen collected in Rapar in Kutch, and named Pratincola macrorhyncha. Later it was named Stoliczka’s whinchat Saxicola macrorhyncha. In 2004, BirdLife International changed its name yet again to white-browed bushchat as it has conspicuous white-brows, more noticeable during the breeding season in the male. Recent DNA studies have created a great upheaval in taxonomy. Previously related species are now considered unrelated, and unrelated species are now considered to belong to one group. For instance, the white-browed bushchat does not belong to Pratincola but to Saxicola, old world flycatchers.

Leaving aside the taxonomy to experts, what attracted my attention to this relatively unknown bird in the early 1990s was that practically nothing is known about this species. Consulting the magnum opus of Indian ornithology, 10-volume Handbook of the Birds of India and Pakistan, by Dr Salim Ali and Dr Dillon Ripley revealed that it is found in the Thar Desert and nearby drier areas of Punjab, Haryana and western Uttar Pradesh. The book specifically mentions Aligarh, where I was teaching from 1992 to 1997. Aligarh has some drier areas so we went out looking for this bird, but found none. What further arose my curiosity that I had conducted many surveys in the Thar Desert in 1980s but never came across this bird. In 1992, my friend, Dr T.J. Roberts mentioned in his book Birds of Pakistan that Stoliczka’s whinchat is extinct in Pakistan as he could not find any during 28 years of field work. Why would a small, bulbul-sized elusive bird become extinct when it is not trapped for trade, hunted for food, and when its habitat has not changed much. Quick correspondence with International Council of Bird Preservation (now called BirdLife International) and Oriental Bird Club (OBC), UK brought the good news that Dutch ornithologists had photographed it near Khara, a village between Phalodi and Jaisalmer.

I had gone through this village many times during my surveys of the Great Indian Bustard but I had not noticed it (I was mainly concentrating on my work on the bustard). With the support of OBC, Cygnus Wildlife Holidays, and WWF-India, I decided to uncover the mystery of this ‘extinct’ bird. The first survey of three weeks in 1993 revealed four birds between Undu and Kanasar in Jaisalmer and Barmer districts. None seen in Gujarat, and even Rapar where the first specimen was collected, 120 years ago. In the second survey in the same year, only one could be seen in four weeks. While the third survey in January-February 1994 brought the bonanza: we saw about 81 individuals in 15 different sites in Rajasthan. Once my papers and articles were published, many more people got interested and now its presence has been recorded in Sultanpur Bird Sanctuary, and Hissar in Haryana, Naliya in Kutch, Velavadar, Little Rann of Kutch, Desert National Park in Jaisalmer and Barmer, Diyatra in Bikaner; Keoladeo National Park in Bharatpur; Khichan in Jodhpur; Ranthambore in Sawai Madhopur; Sonkhilya in Ajmer and Talchappar in Churu. It is also reported from Akola and near Pune, Maharashtra. When I started the work on this species, there was not even a good picture, but now we have a surfeit of images, thanks to the long-lensers always looking for rarity. The portal eBird has 278 records, many repeated from the same sites by different birdwatchers.

Researchers have observed that the bird puffs its white chest feathers and sways. This may be to threaten predators and human intruders, or startle prey. Photo: Devesh Gadhavi

While studying this bird, I noticed an interesting behaviour — it does a puff-and-roll dance while it is foraging on the ground. It does not appear to be related to aggression or territoriality. While on the ground looking for insects, the bird puffs up the breast feathers and sways sideways. The whitish breast and white belly become conspicuous and the bird appears larger than normal. I recorded such a behaviour always on the ground while the bird was foraging, Nikhil Devasar, a very competent birdwatcher, saw a female ‘puffing’ from a high perch when he first approached her for a photograph. We still do not know the purpose of this puff-and-roll display. Is it to startle the insect prey? But why would it do this when the bird has already seen a prey from its perch. Like most members of Saxicola, the white-browed bushchat perches on a small bush and looks all around. When a prey is sighted, it descends and picks it up, but sometimes it does this puffing dance. It is an interesting topic for young researchers to study. Another curious behaviour that I noticed is that some individuals are quite bold and allow you to approach close (5-10 m), while others will fly away from 50-100 m.
Despite some research it is still a mystery bird to me. We do not know where it nests, how many eggs it lays, where it goes in certain seasons, and what are its ecological requirements. Its cousin white-throated bushchat Saxicola insignis breeds in a small area in Mongolia and Russia and migrates in small numbers to north India, Nepal Terai, Northeast India and Myanmar. The white-browed bushchat is not seen throughout the year. I wonder whether it also migrates to India from some unknown areas of Russia or Mongolia?

Fortunately, we now have geolocators and GSM-based systems for tracking small birds. I hope some researcher shows the inclination to study this enigmatic bird of India. Like the white-browed bushchat, there are many more species that need detailed study. Is anyone listening?