First Among Equals: Wild Asses of the Little Rann of Kutch

The Little Rann’s flagship species is shy, skittish, and ever alert to human intrusion into its home

You never forget your first. Whether in a classroom or out in a desert, you never forget the first time someone (or something) walks into your field of view and takes your breath away. I’d experienced this several times through my school and college years, and it was a pleasant surprise to feel it again, decades later, in the Little Rann of Kutch.

At the end of 2019, I spent a few days at Rann Riders, a resort in Dasada, about 90 km northwest of Ahmedabad. This was to be the base for my explorations into the unique habitat of the Little Rann of Kutch, home to the Indian wild ass (Equus hemionus khur). Rizwan Malik, the naturalist accompanying me from the resort, had just driven me on my first safari, when he quietly said, “There, dead ahead”. My expectations had been calibrated by many forlorn safaris across various parks and reserves in the country, and so, not expecting to spot anything as soon as we entered the wildlife sanctuary, I was looking down at my camera and fiddling with some settings.

I looked up to see a herd of wild asses, not a few hundred metres in front of our jeep, staring right back at us. And just like that, I was the teenager who, on his first day of college, is dumbstruck by an unexpected bevy gracing the corridors. Rizwan, old hand that he is, started chuckling at my gaping and slowly started driving us towards them. All the while he was warning me that the species is famously skittish, and that I should have my camera at the ready because they wouldn’t let us approach too close. Sure enough, as we rumbled closer, the herd started trotting away from us, wary of our intrusion. I started taking pictures, marvelling at how the herd managed to keep the distance between us at a constant, when I noticed one individual getting larger in the viewfinder. I put the camera down, looked at Rizwan, and saw that he wore a quizzical look. As we got closer, and the ass held its ground, Rizwan remarked that he’d never seen such a bold ghudkhur (the local name for the species) before. The ass allowed us to get to within 10 metres of it, by which time the rest of his herd had retreated into the distance. Even for a dominant male protecting his family, this was unusual behaviour that Rizwan hadn’t seen before in all his drives into the Little Rann. Being stared down by a magnificent male wild ass in his prime is something I won’t forget soon. This most unusual of encounters, literally five minutes into my first ever excursion into the creature’s habitat, was to set the tone for a series of interactions that were all as memorable as they were distinct.

Like most herd animals, wild asses live in tight family units that provide safety in numbers, and helps mothers and foals alike.

Like Asiatic lions, the Indian wild asses are eye-catching megafauna that once ranged across parts of Western Asia, but are now found only in Gujarat. And while this is a sad commentary on the effect of human growth on animal populations, this exclusive status led to nearly 5,000 sq km of the Little Rann of Kutch being safeguarded as the Indian Wild Ass Sanctuary in 1972. The Little Rann is a unique ecosystem. Formed by tectonic movement aeons ago, it is the dried out ocean floor of the Gulf of Kutch that floods every monsoon. This seasonal inundation floods the expanse of the Rann, creating 74 islands, or bets as they’re called in Gujarati. The bets can rise up to 55 metres high from the saline plains, and may be as large as 30 sq km across. For the few months before winter sets in and the sanctuary is under water, these bets act as vital refuges for the asses. Since they are never flooded, they not only offer important dry ground for shelter, but also serve as a grazing shelter at a time when the vista resembles an inland sea. Around 5,000 asses are said to live in the sanctuary, and while many wander outside its limits during the rains, in search of shelter and food, around 2,000 make the bets their monsoon homes.

It was at one such refuge that we ran into a specimen that lived up to his species’ skittery reputation. One day, Aiubbhai, another naturalist from Rann Riders, was driving me around Meldi no dhoro, a bet that is famed for being a communal roosting site of the short-eared owl. Twenty minutes and 20 owls later, a lone wild ass suddenly broke out of the thicket and darted to the other side of the track. Intrigued by its reticence, we decided to follow it discreetly. But the ghudkhur had other plans. For 20 minutes, it made asses of us as it wove effortless in and out of the scrub, never giving us more than a fleeting glimpse of a flank or a hoof.

From playing around to mating and territorial displays, physical expressions and engagement are a vital part of the Indian wild ass’s socialisation.

The Indian wild ass is one of five subspecies of the Onager wild ass, native to Asia. It is a striking animal, with a chestnut coat, pale cream coloured underside and legs, and a short, cropped mane. They are diurnal grazers that feed on grass, leaves, and fruits of trees like the prosopis and piludi (Salvadora persica). They are also adapted to feed on saline vegetation like the morud (Suaeda fruticosa), a small succulent that grows freely in this habitat. This allows the wild ass to thrive in an ecosystem in which not too many other large herbivores can. The sparseness of vegetation also makes them wander into the fields outside the sanctuary, to feed on the easily available bounty of crops like cotton, grains, and pulses. Wild asses live in family groups of 15 or 20 animals, and it was one of these that gave me the classic wild ass sighting. 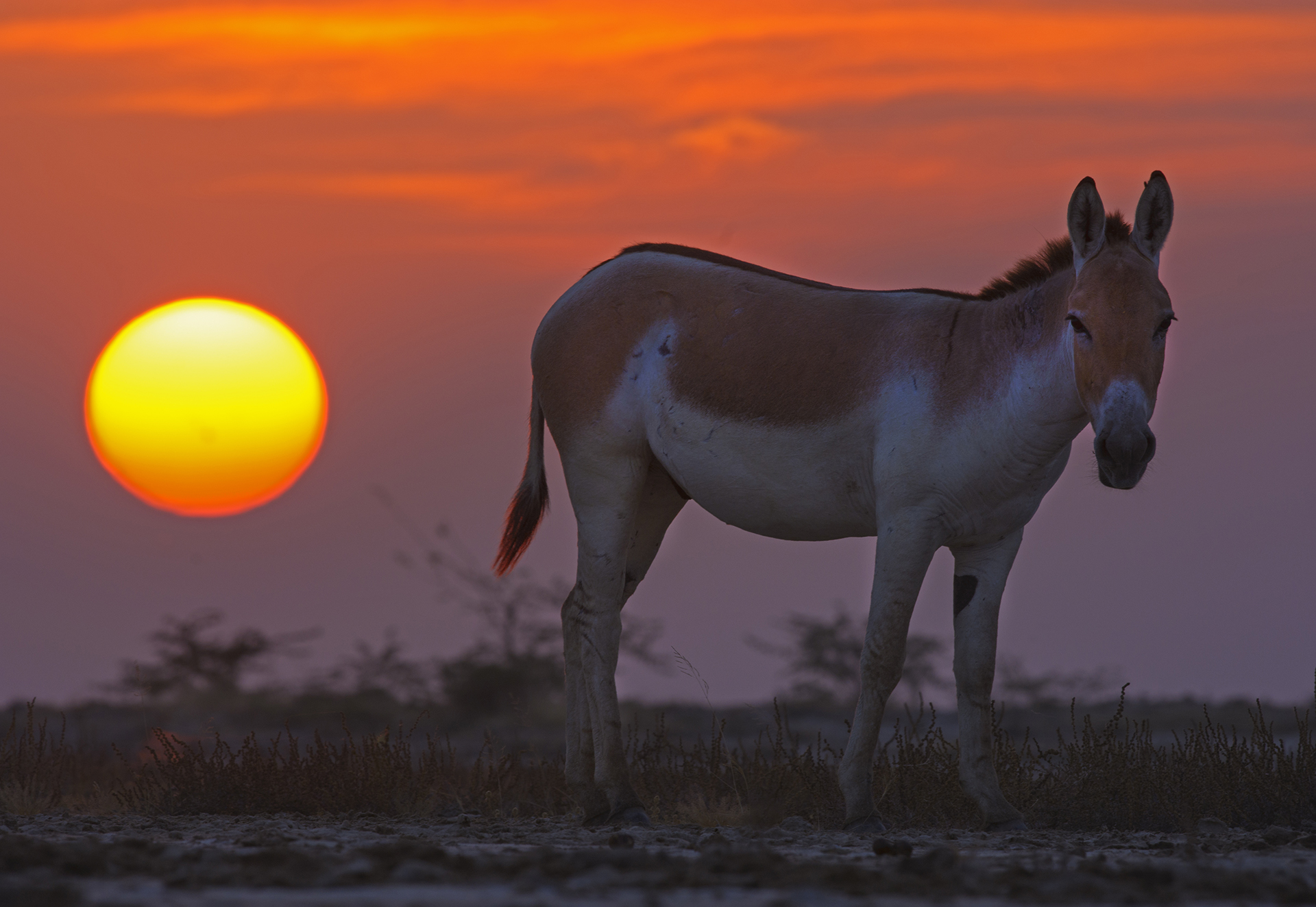 The Little Rann provides ample grass for the grazing needs of the wild ass. However, in summer, when grass cover is reduced, it may also feed on the leaves and pods of the invasive species Prosopis, what locals refer to as gando bawal or “mad tree”.

When we were returning from an afternoon visit to the Vachhraj bet, naturalist Juned Malik, Aditya Roy (birder and partner at Rann Riders resort) and I chanced upon a family of around 15 asses that had a few yearlings. Before we could get closer, they took off on a run across the Rann. Wild asses are among the fastest land animals in India and have been regularly clocked running at speeds of up to 70 kmph. We kept a respectful distance and tried to keep pace. And failed. As much as Juned tried, the asses nonchalantly clipped across the cracked desert at a groundbreaking pace that our jeep could just about match. The distance between the animals and us stayed constant as we stayed around 70 kmph, proving that their top speed was no lie. Juned could have floored it, but we were mindful of not disturbing the animals any more than we already had, and we were grateful to witness their effortless grace. What was even more impressive was how, regardless of speed or shifting directions, the adult animals always ran in a way that positioned them between us and the foals. The reassuring protective behaviour on display would have put most hovering human parents to shame. Seconds seemed like minutes as everything stayed relatively constant on that flat, featureless landscape. It was only when we spied a salt workers’ camp growing bigger in the distance that the spell was broken. We stayed that course, as the asses peeled off into the safety of some vegetation on our left.

I subsequently saw wild asses on every safari I took into the Little Rann. Even so, the surge of that first encounter had no equal.