Woolly Wolf: An Ancient Lineage in the Himalayas

Himalayan wolves are versatile beings that are well adapted to the cold high-altitude desert. These wild canines share an environment with snow leopards and are known to roam great distances

For as long as humans have existed, wolves have as well, though they’ve probably been around a little longer. From the Paleolithic Stone Age, early humans feared as well as fantasized wildlife. It is evident from the myths and stories among many communities, that the image of wolves has been presented as one of the most guileful and Janus–faced creations known. Beginning with Red Riding Hood, to Sirius Black, and the 2015 Oscar-winning Hollywood film The Revenant, and modern-day resident werewolves — the need for humans to vilify man’s best friend’s cousin, burns bright. Though, one may accuse Hollywood and the Game of Thrones for having continually relied on wolves as proxies in the depiction of wilderness and dark fantasy, our very own made in India images of wolves have not been not very kind either.

In Indian mythology, in the Rig Vedas Rijrsava is blinded by his father as punishment for giving a hundred and one of his family’s sheep to a she-wolf. It is not surprising that etymologically bhediya (wolf) and bhed (sheep) are such closely related words. So called, wolf-like qualities such as gluttony and a voracious appetite were attributed to Bhima, by calling him Vrikodara, meaning “wolf-stomached”. And, finally, we also have Mowgli whom we can claim as our very own wolf boy. Wolf boys did exist even in British India.

For many of us who have no idea of Himalayan wolves, I would advise a re-watch of The Jungle Book, from a naturalist’s point of view. Through the scenes, the Central Indian highlands and hot deciduous plains you will find Hollywood’s wolves lacking in the characteristics of ‘leanness’ to suit cinematic grandeur. Maybe the producers had never seen Indian wolves. Akela the alpha male is depicted as a Himalayan wolf with a lovely mane. And, Raksha is a lovely golden she-wolf who raises her man cub, Mowgli.

On the subcontinent, Richard Lydekker the famous naturalist once described a wolf of the Trans-Himalayas. He noted the animal may have developed a warmer and heavier coat to suit itself against the harsh cold desert in the high Himalayas. This very wolf Canis lupus chanco or Canis lupus laniger later became known as the Tibetan wolf. Many other names exist: the Himalayan wolf or even the Mongolian wolf. Truth is, no one has yet come to a consensus on how many types of wolves exist in the Himalayas and Tibetan Plateau. 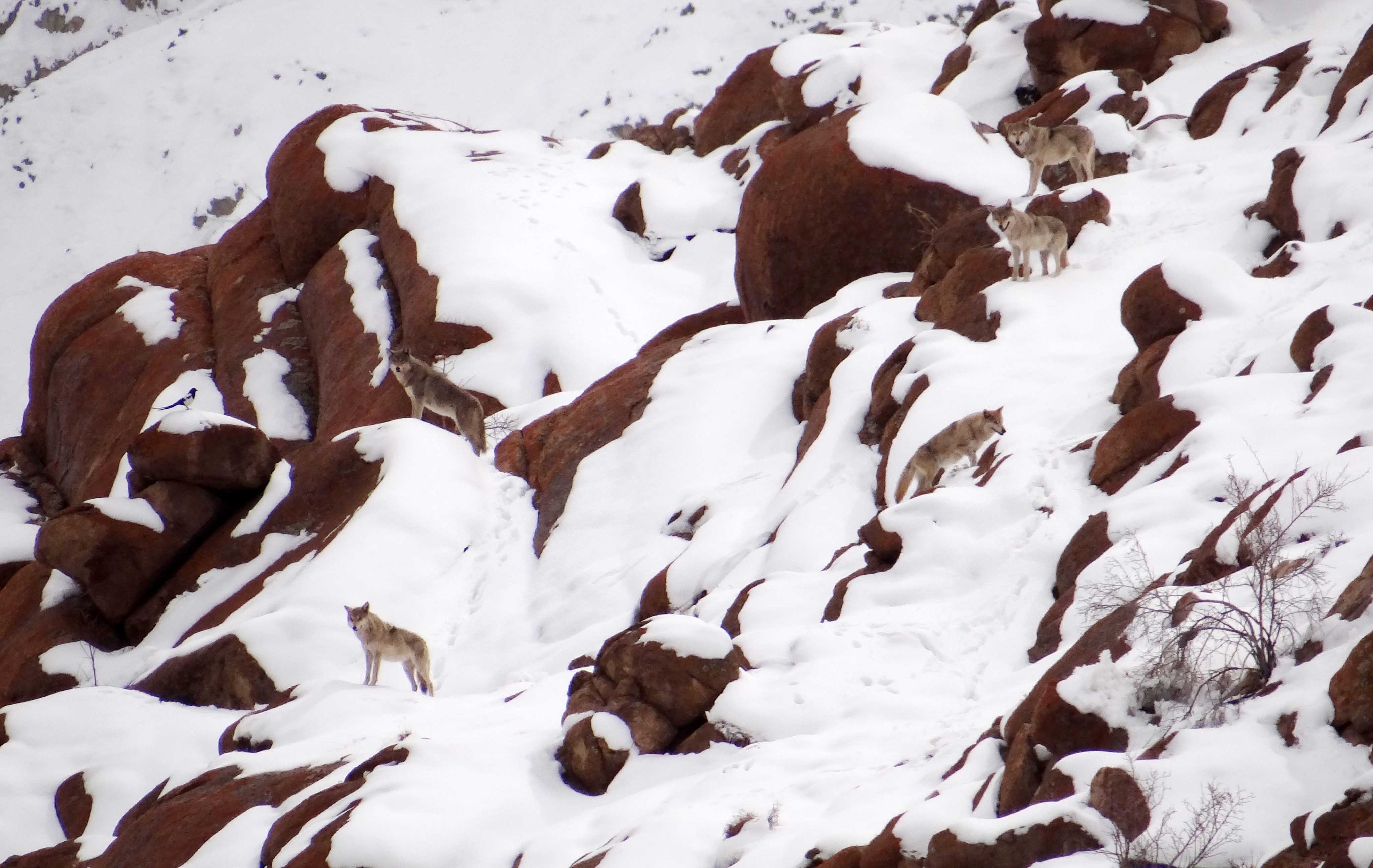 Usually found in packs of about four to five individuals, these wolves move up to 20 km in a day. Photo: Surya Ramachandran Found in the high-altitude ecosystems of the Himalayas and the Tibetan plateau, the Himalayan wolf belongs to an ancient lineage of wolves. Cover Photo: Dhritiman Mukherjee

Wolves are versatile beings. They are the only terrestrial mammal species (except humans) to have colonised the entire Northern Hemisphere. Since industrialisation, wolves have been gradually wiped out from many parts of the world. It is estimated that around 350 wolves survive in the Indian Himalayas. Wolves evolved in Asia, and migrated to Eurasia and from there to North America around 500,000 years ago. Early ancestors of present day wolves are dated back to the Miocene era. The famous dire wolves from the Game of Thrones were bigger relatives of the present day grey wolf (Canis lupus); they coexisted for about 100,000 years. Competition with Canis lupus, anthropogenic pressure, and extinction of other large mammals, about 16,000 years ago wiped out the species.

Himalayan wolves are unique. The canis lupus chanco or woolly wolves do not belong to the lineage of other Holarctic wolves of the world. They are truly our very own, like ‘make in India’. Himalayan wolves, like their charismatic co-predators, share a landscape with snow leopards. But what makes these wolves amazing? For starters, they diverged from a wolf-like ancestor much earlier than modern wolves. Himalayan wolves are well adapted to the cold, hypoxial environment. Unlike other wolves, they tend to be stouter and more heavily built than their other Indian cousins. 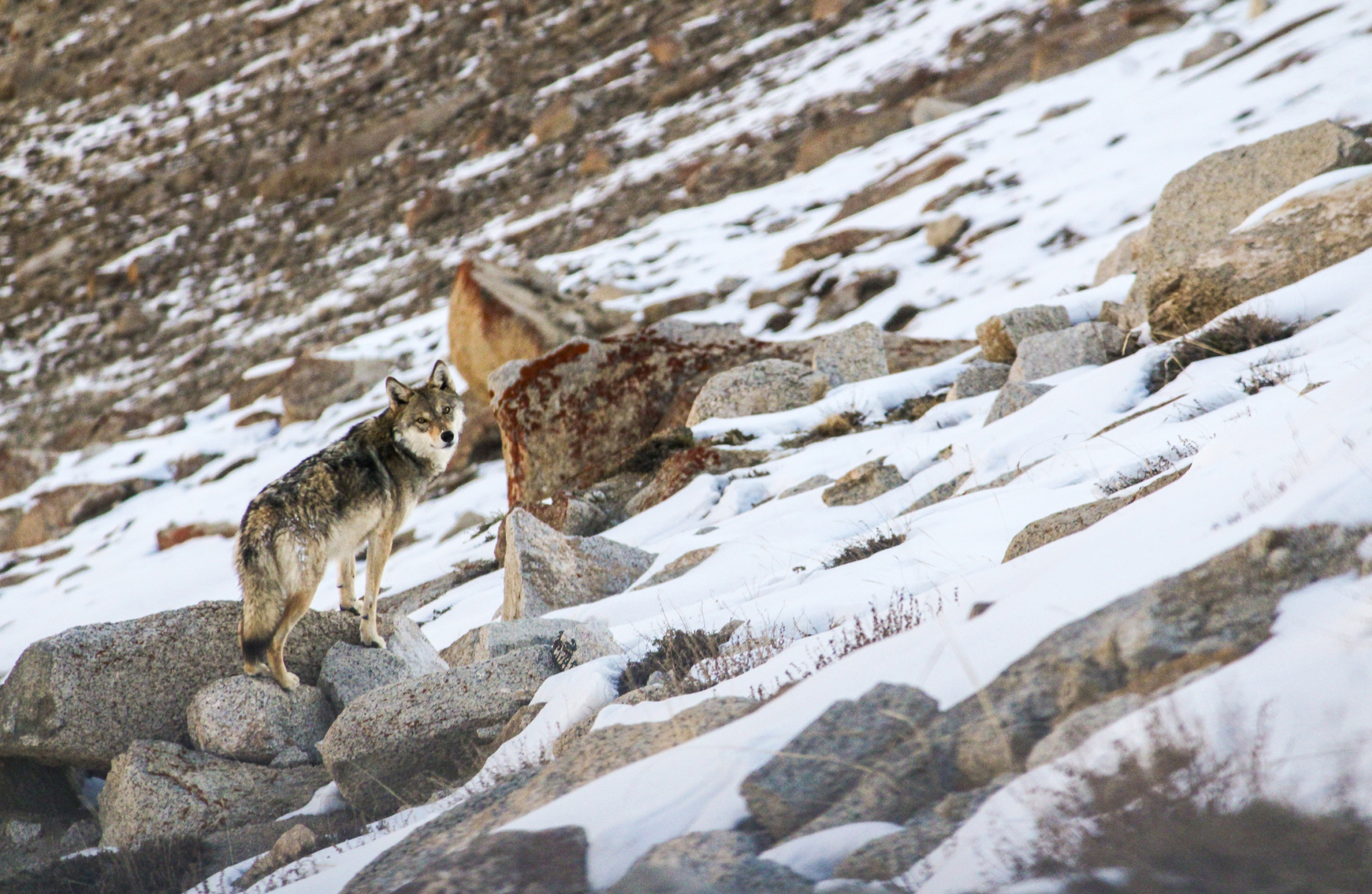 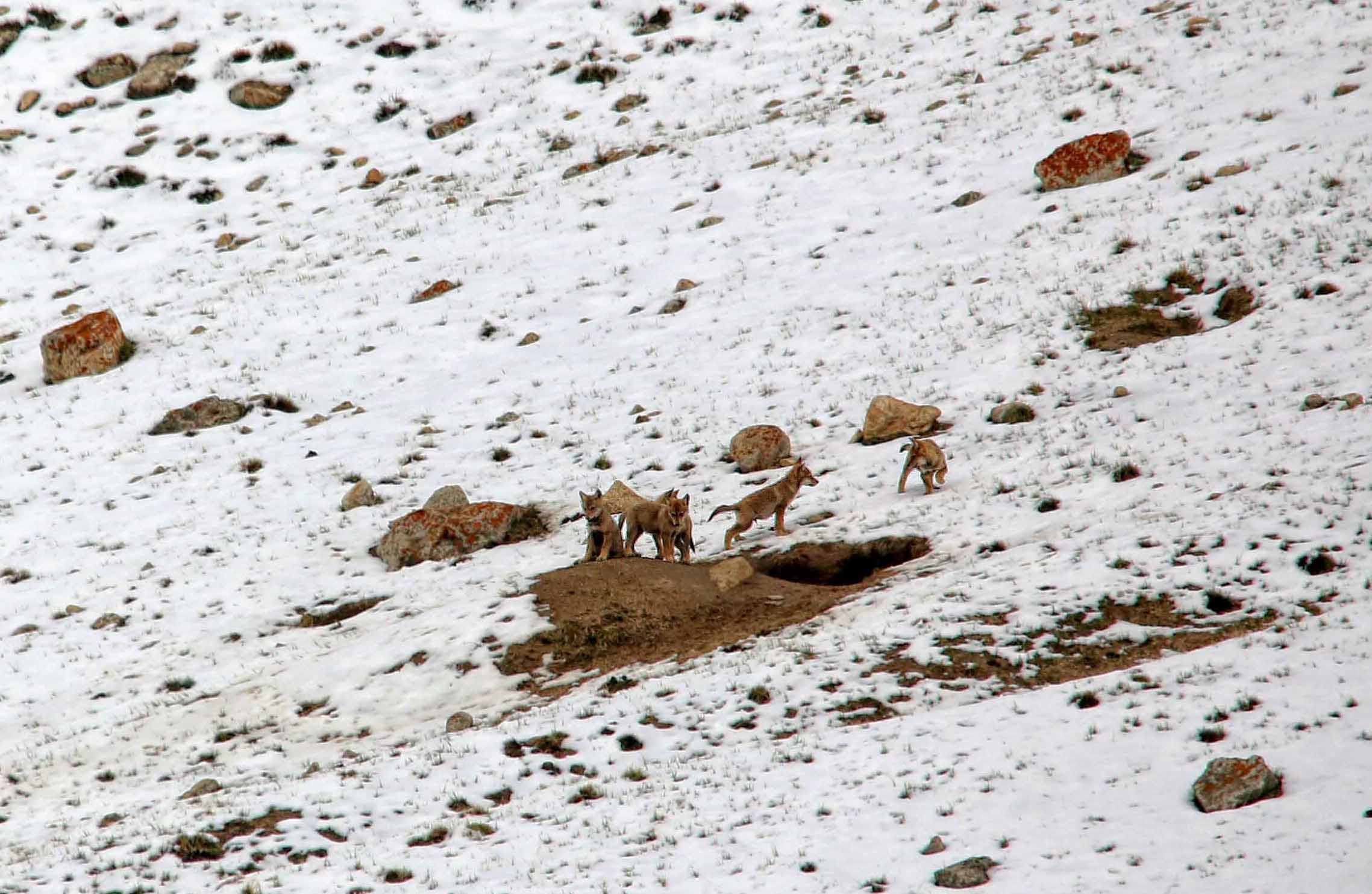 Stockier than its cousin found in the plains, the Himalayan wolf is also known as the woolly wolf due to its thick fur. Photo: Vipul Sharma A litter usually comprises four to six pups, which stay near their den till about they are two months old, after which they join the rest of the pack. Photo: Surya Ramachandran

In the regions of Spiti and Ladakh they believe that, shanku, or the wolf, is like the wind. Quite infamously known to roam in packs of four to five, they will devour local livestock. In recent years, studies, including ours, have shown that Himalayan wolves have a limited existence in the western and eastern Himalayas.

However, not much was known in terms of the movement ecology of these wonderful canids. Research has led us to begin to understand why wolves move. It enables us to answer why wolves use a resource at a given time and to what extent. This can help in conserving the species with respect to the region, its prey, or the forest in which it occurs. So far, our experience in tracking these animals with the help of GPS-embedded collars has provided many wonderful insights into the secret lives of wolves. One mighty fact is that they probably command areas up to nearly 2,000 sq km. Average daily movements of about 20 km by similar packs is common. Animals rarely recognize geographic boundaries. Very often wolves have been reported off the border. This undocumented fact suggests that these wild canines are long-distance players and can influence ecological settings over vast trans-boundary landscapes.

Locally known as the kipchang, individuals such as this one, a result of interbreeding between wolves and dogs, are the face of the many challenges facing these animals in the landscape. Photo: Surya Ramachandran

There is a grim side, however, as studies on Himalayan wolves have shown, that on a conservation front, they may be treading on thin ice. Interactions with feral dogs, disease, and prey depletion may lead to their complete extermination in this area. Wolves have been reported to be pairing with feral dogs. Could this mean wolves are unable to find mates? In many parts, wolves are still denigrated and considered uncharismatic, a bane for hardworking pastoralists. The tiger in the modern world is not much of a villain any longer. Unlike the tiger, wolves today face terrible circumstances.

The changing face of the Himalayan socio-economy has led to increased tourism and newer opportunities, coupled with environmental collaterals. Whether there will be room for all stakeholders in this new landscape of growth remains to be tested with time. But history has shown that far too many times, environmental problems are the least of humanity’s concerns.

It is often said that though ‘the tiger and lion may be powerful, one never finds a wolf in the circus’. In the high-altitude cold deserts of the Himalayas, if there is one animal that has lived through millennia, existed with locals, cautiously adapted to humans, with every chime of the whispering wind — it is this ancient wolf of India, the woolly Himalayan wolf. 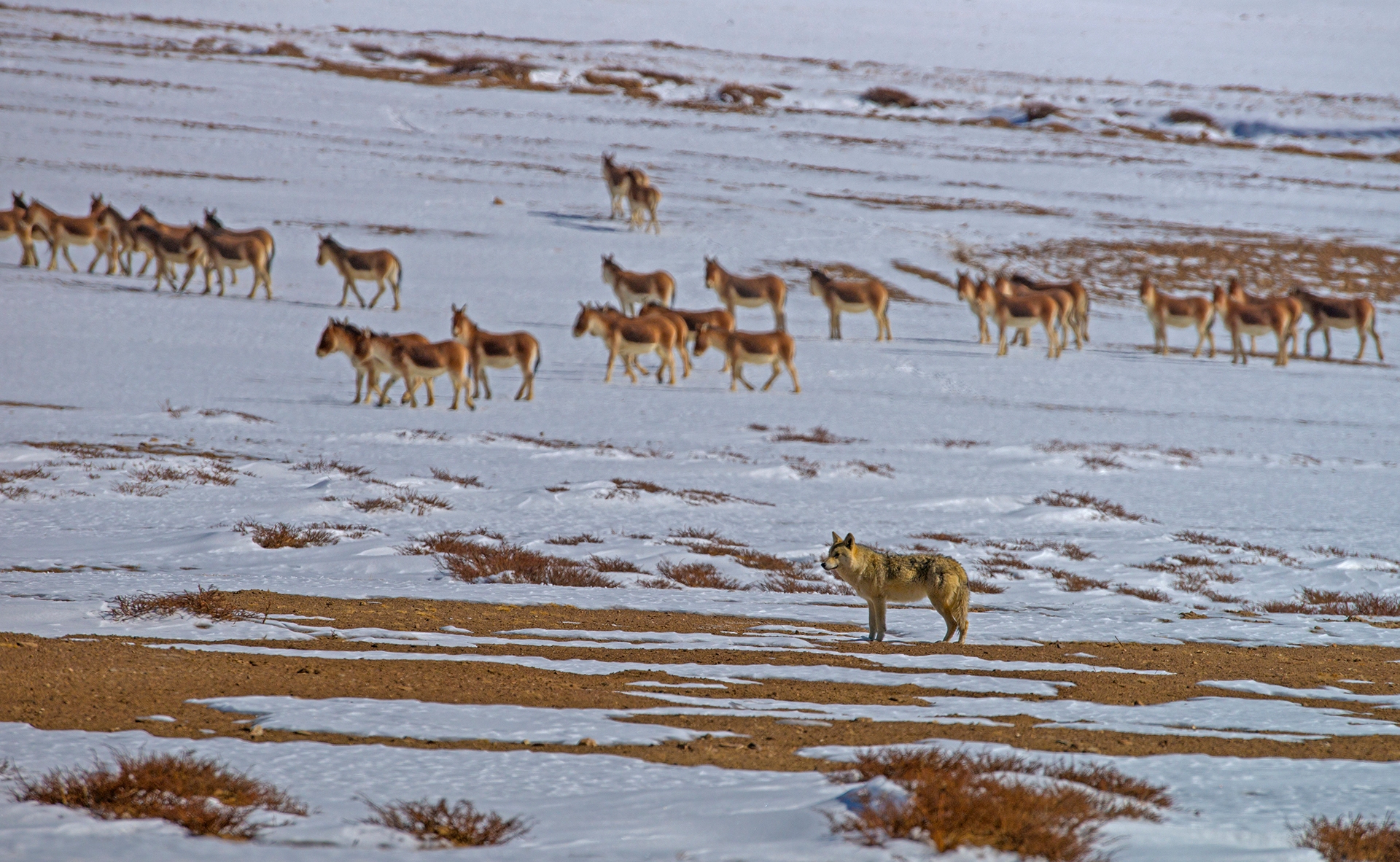 Breeding with feral dogs, disease, and lack of prey threaten the survival of these understudied predators, which may number less than 350 in the Indian Himalayas. Photo: Dhritiman Mukherjee

is a scientist and a faculty in the department of animal ecology and conservation biology department of the Wildlife Institute of India.